Since Tom O’Driscoll got the closing part in Frank O’Donnell’s full length video: ‘PEOPLE MOVE WITH THEIR HANDS’ we thought we’d upload this Norwich, now Sheffield based fella’s interview from Issue 14 of the mag. Since this interview was released Tom has landed himself on the very rad World Peace Machine, so expect to see more from them soon. In the meantime have a read below then rewatch Tom’s dope part from our latest video release. 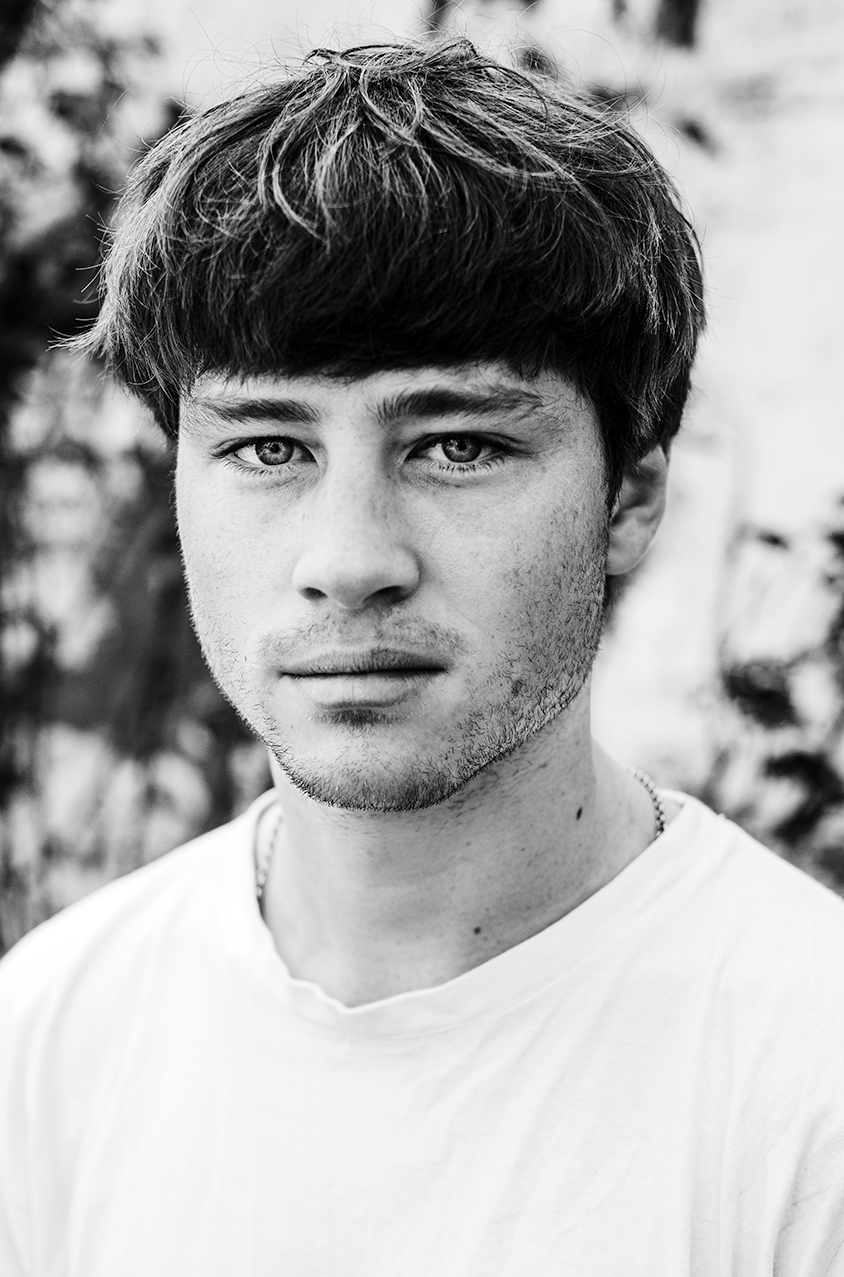 Big fan of Tom O’Driscoll on the old shred stick, my sources tell me that he’s also very good at the ‘YouTubes’, so if you’re stuck in a lift with him, maybe get some recommendations. Aside from that we’re hyped to have him in the mag especially as it reiterates that old gem community, in the sense that Sam Avery, the head honcho at Norwich’s mighty skater owned stop ‘Drug Store’, conducted the interview (and supports Tom’s skateboarding passion through the shop). Sam also did the fine artwork placed throughout the piece with the beautiful colours chosen by his daughter India. How lovely’s that? Anyway get to grips with how rad Tom is and buy a Drug Store tee. That is all. 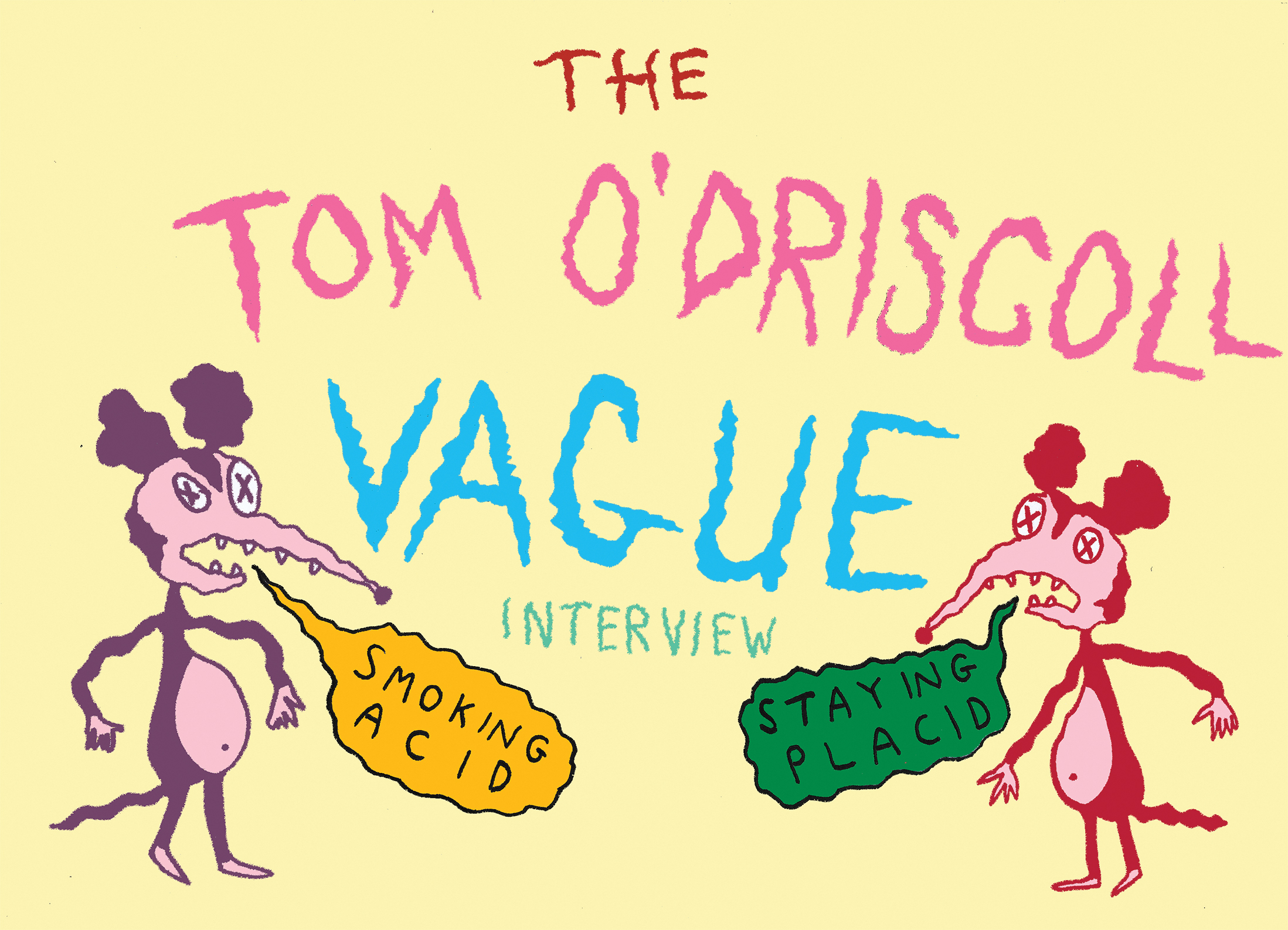 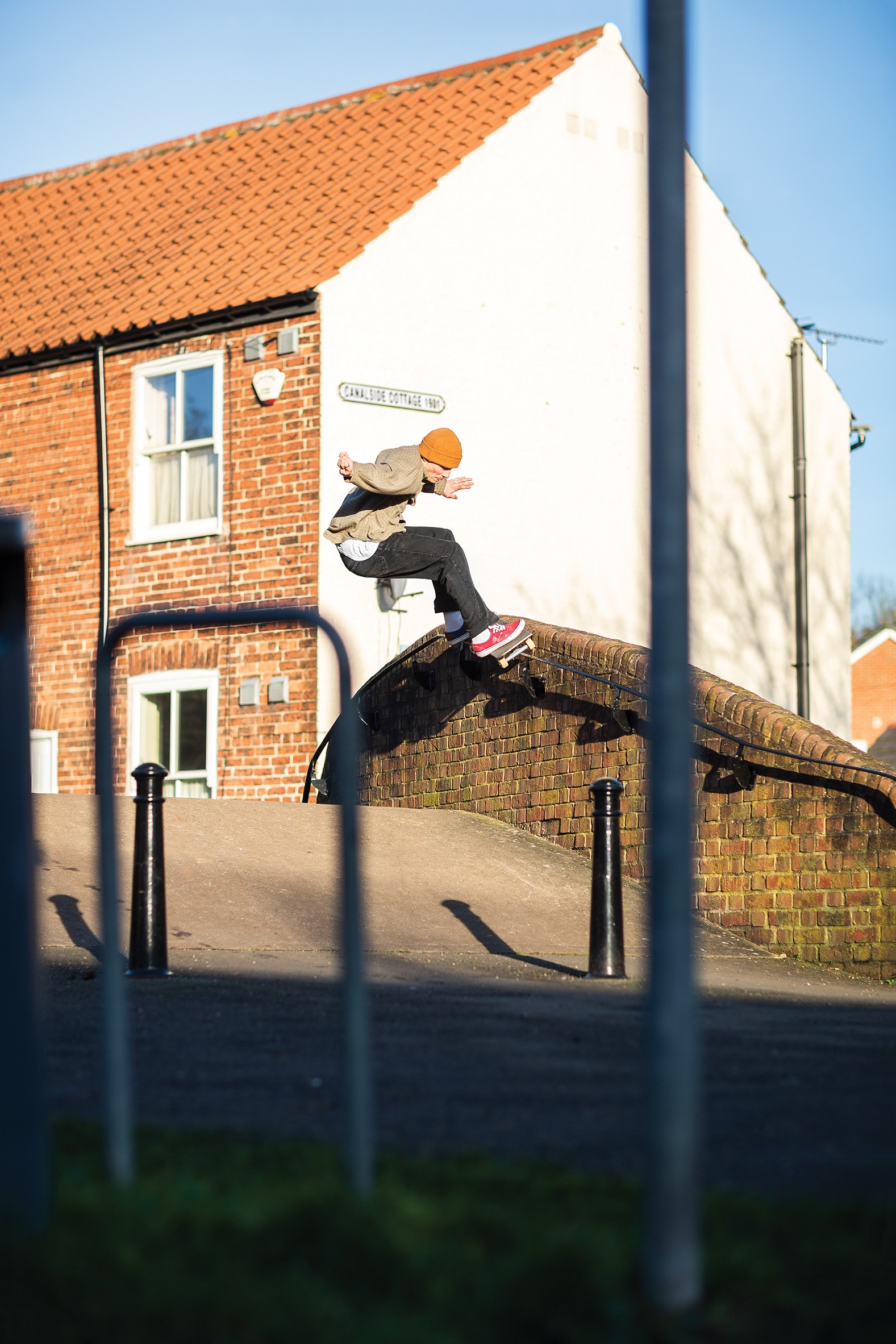 Let’s start with the basic stuff, name, age, where you’re from, etc.

Maybe that’s why you always have nice hair. When did skateboarding come into your life?

Dad bought me a No Fear board from Sports Direct when I was 9 or 10. The graphic was this horrible veiny eyeball with wings and there was a No Fear logo on the grip.

Perfect! Had you asked for it, or was Dad just really prescient?

I just saw it in the shop and he was down cos it was only a tenner. Actually I think back then my parents were more keen for me to be doing karate and shit, but they came round. 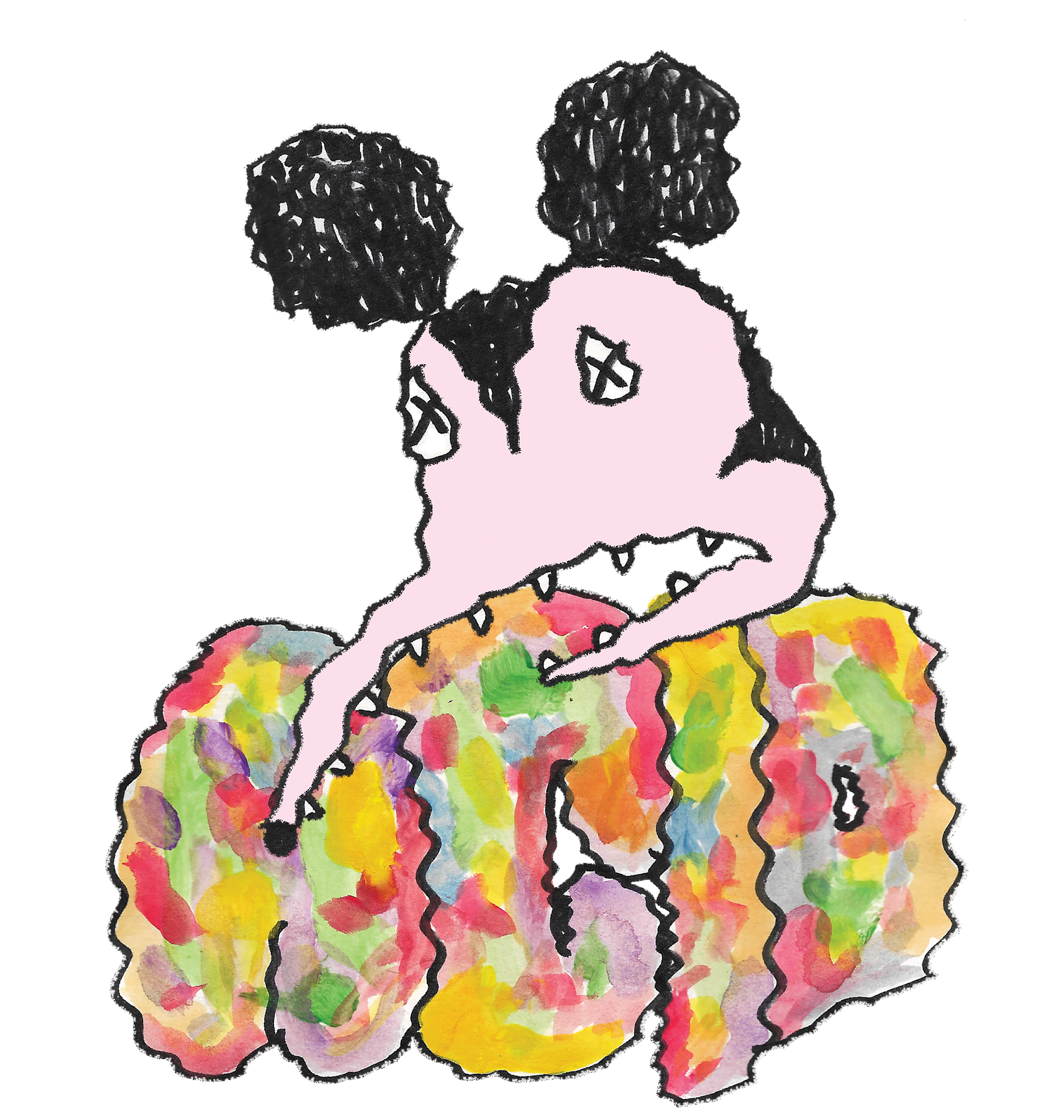 Had you seen skateboarding somewhere before? TV or video games?

I don’t remember exactly what made me wanna start but I remember there used to be a load of kids skating City Hall and Forum every weekend way before I skated. You couldn’t really avoid it if you walked through that part of town. Once I swear I walked past City Hall and there was like 50 people all crammed together with a few people skating normally and the rest doing the most fucked up freestyle tricks. Definitely got my attention. I never had any video games I should add.

There was a mental freestyle scene for a bit. All those emo/mosher Forum kids loved it! Then the City Hall scene was totally separate even though the spots are right next to each other. That was a weird period for sure. Lots of rippers came from the City Hall crew though. Were you not interested in the video games?

I like to think Ash bridged the gap by hand standing his board all the way down the hill. Nah I wanted video games super bad cos everyone else had them. Think my parents knew if they caved then I’d spend all my time indoors so it’s probs for the best. After a certain age you don’t really want that stuff so much anymore anyway. We have a PS2 in my house at the moment which gets used now and again, ‘Ecco the Dolphin’ and that. It’s a nice time.

(Laughs) yeah shout out to Ash and all the City Hall kids who are grown men now. So who’s helping you out with skate stuff and filming these days?

Louis Slater passes me boards, for which I am very grateful. Filming a lot with Zach McAdam for some nice new ‘Panasonic Youth’ stuff which should be coming soon if it’s not already out by the time this goes to print. I’m also trying to get a few more clips for Frank O’Donnell’s next video (watch it here). He’s been working on it nearly two years now so expecting good things. I’ve got a couple clips with young Ben Kinsilla, though I’m not sure I know exactly what he’s working on right now. Similar story with Albert Mu. I actually have a few unseen Norwich clips with Danny Jackson and Liam Painter too! Both have things in the works for this year which I’m looking forward to seeing. Oh shit, and I ride for Drug Store too of course (laughs). 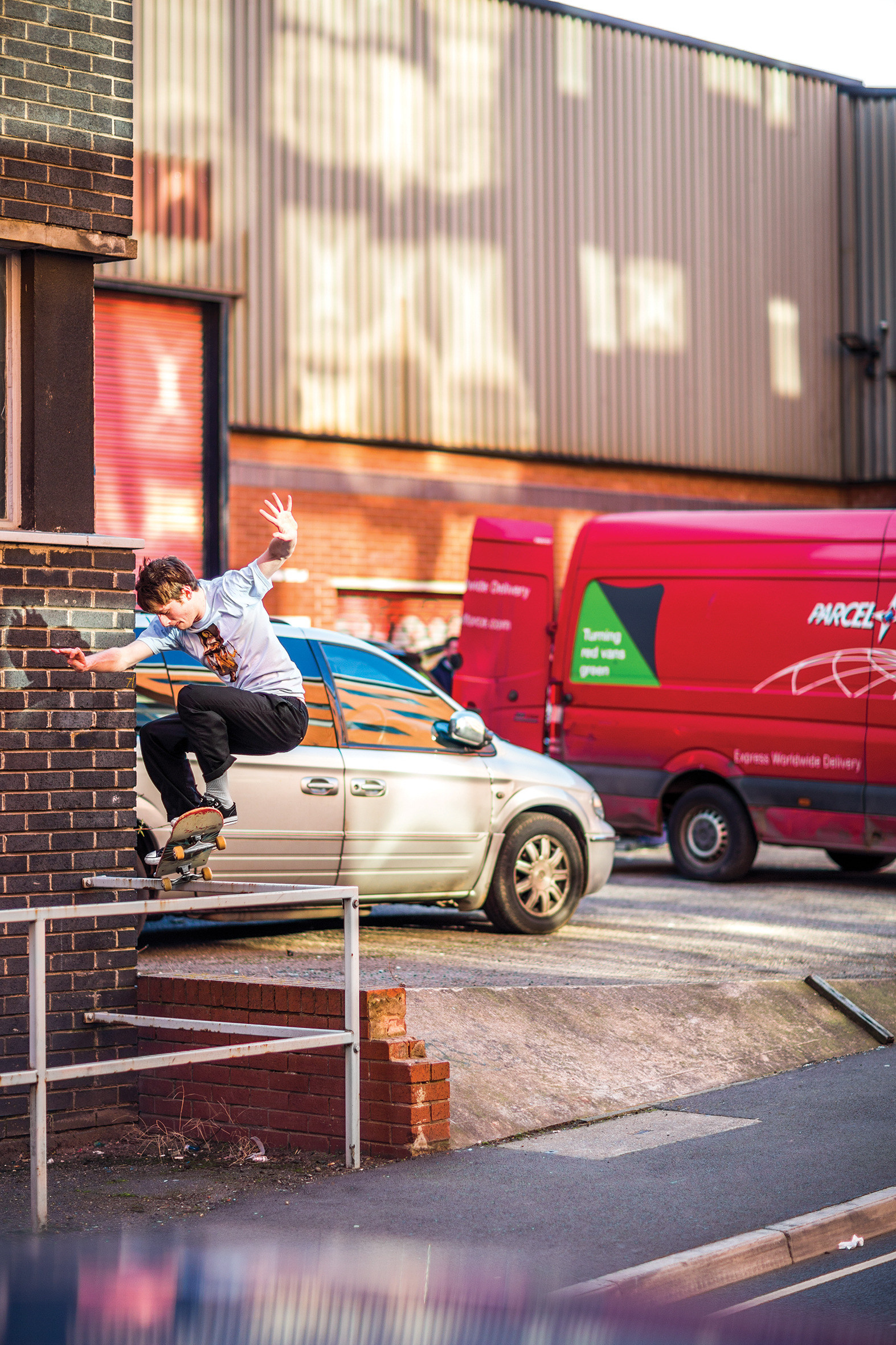 Wanna tell me about the Kate Bush Tory thing?

A while back Kate Bush did this interview where she said she thought it was a good thing that Theresa May was prime minister, that it was what the country needed. The next day maybe there was a Guardian article calling her a Tory. I was pretty bummed hearing about it cos I love her music and I don’t much fuck with Tories, and I was pretty touchy about it when Liam and Callum Painter started reminding me regularly that my favourite musician was one. Anyway couple weeks after that she comes forward to set the record straight and explain that she doesn’t support the conservatives and that the interview was taken out of context. She says she was just showing support for having a woman in power. It’s not the most convincing, but it’ll do as far as I’m concerned. Liam and Callum still reckon she’s a Tory though. They love teasing me about it (laughs).

I love all of Danny Jackson’s vids but my favourite Drug Store video is ‘Dreams That Money Can Buy’ cos it’s got everyone. Roger Twycross has clips, Barbs skates to Jeffrey Lewis, shared Ollie Smith and Dean Khalil part and they skate to ‘The Penetrators’. It’s the only video where you can see Ben Rowley in a Creature tee and Jasper Pegg repping a Palace Tri-Ferg tee, it’s like a parallel universe. I love the after credits montage too. Love the vid all round, props to Lewis ‘Spex’ Ross. Favourite Drug Store rider is difficult so I’ll split it up into all timers and present dayers. At the moment my faves are probably Jasper Pegg, Ross ‘Barbs’ Barber, Stephen Malet and young Theo (Thelonius Omori). But if we’re talking about faves ever I’d need to include Sam Dolman and Frank Stephens too. 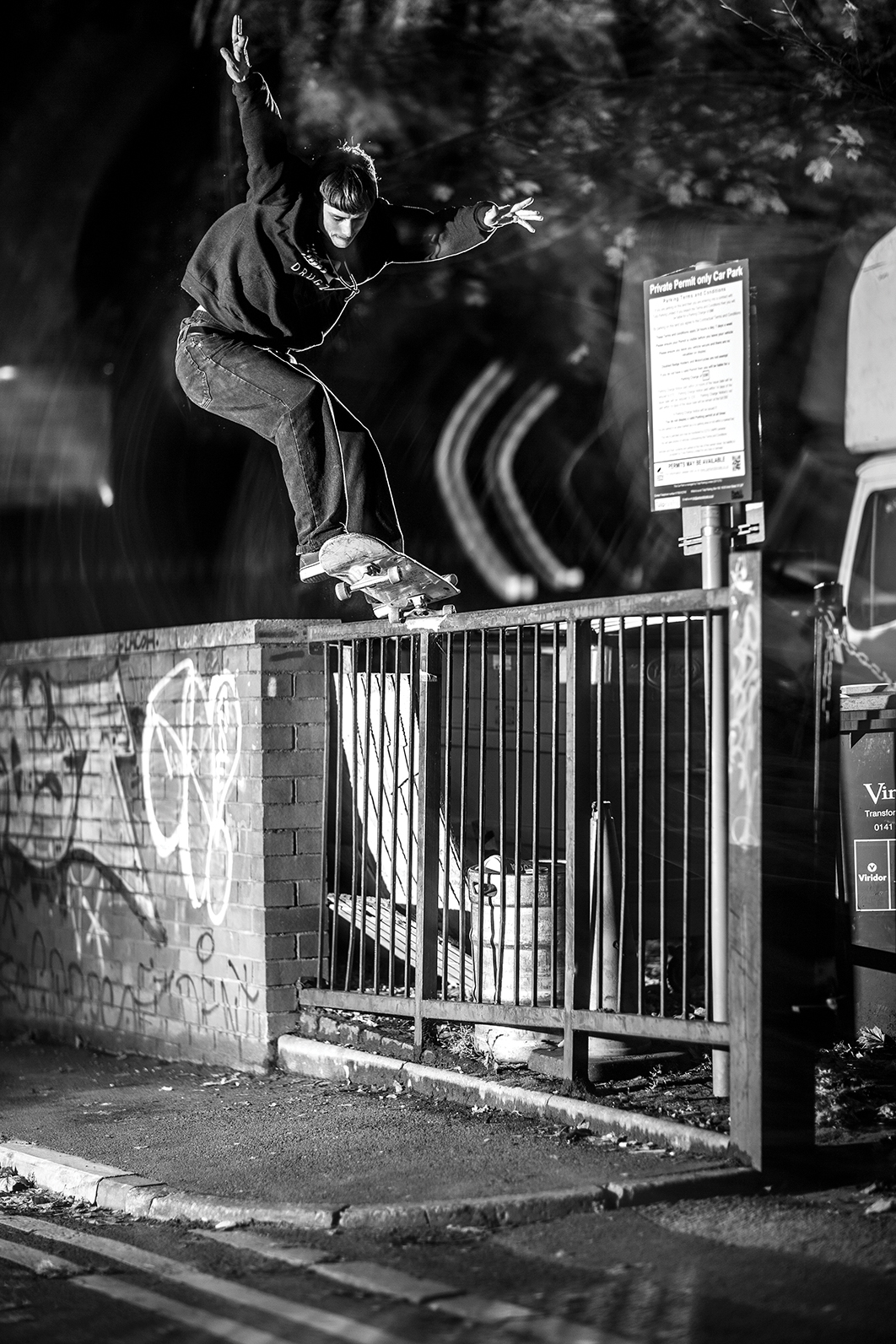 Nice one Tom. Also why do people call you Spanky?

Secrets out now eh. When I was smaller I used to wear a raglan shirt, super skinny jeans, a mesh cap, fat trainers (Rowley xlt’s to be precise- guess they looked a bit like old Emericas?) and I had long hair too, so I looked kinda like Kevin Long. I can’t remember exactly who said it but there was a comp at Eaton one summer and someone yelled it while I was skating. Stayed with me till I moved to Sheffield. Cute innit.

It’s very cute. I can tell you that Joe Habgood is responsible for yelling “Spanky” during your runs at that comp. He’s a legend so you can be proud. How do you find skating Sheffield compared to Norwich?

In purely practical terms, Sheffield is a lot easier than Norwich. I was never really able to skate the whole way into town from my parents house because the pavements in Norwich used to be really rough. In Sheff, every house I’ve lived in has had a smooth hill bomb into town. I appreciate that so fucking much (laughs). Sheff has a bunch of fun spots in town that you can skate between easily. With Norwich, the spots can be pretty spread out and lot of them are really hard to skate. But this kinda makes the scene in Norwich more interesting. You have to think a lot harder, be on the lookout for things people haven’t skated or hadn’t thought of as a spot. I think this shows pretty heavily in any of Danny or Liam’s videos and makes them fun to watch. I’m not saying it’s easy to get clips in Sheffield at all, just the considerations are different. You have to think a bit more about what’s been done before and how you can approach a spot differently that’s already seen a lot of tricks go down. New spots pop up here fairly often too, which unfortunately can not be said for Norwich. But then some of the classic Norwich spots are still my favourite. I’ll always love the law courts. 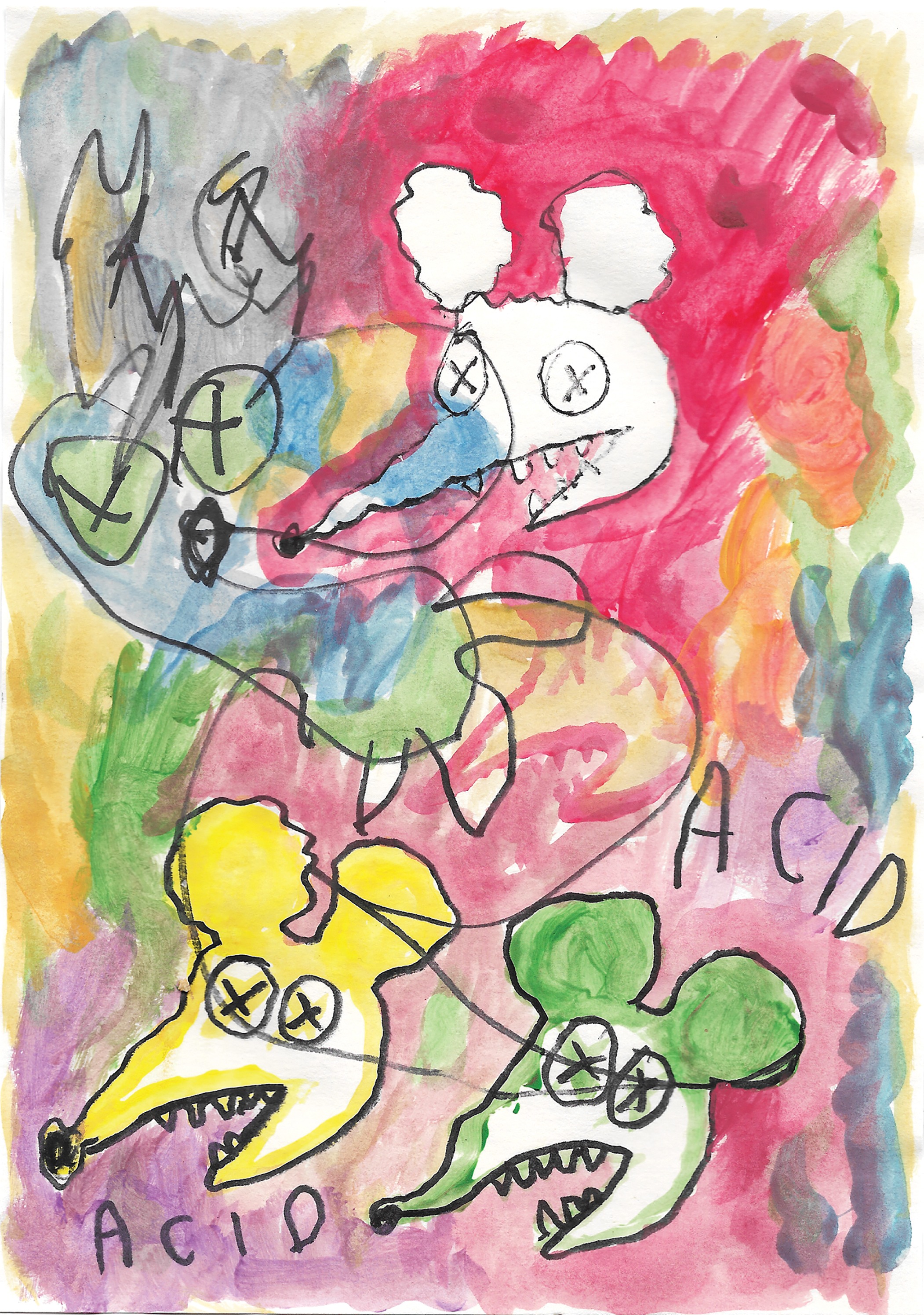 Yeah that sounds pretty accurate. I’ve skated Sheffield a few times and I know what you mean. Ok, that wraps it up unless you’d like to shout anyone out or say something enlightening to finish up?

Would be cool to shout my parents and sisters for their support. I definitely want to thank you Sam Avery for helping me in numerous ways for years now. Also Zach McAdam, Reece Leung, Rich West, Liam Painter, Callum Painter, Danny Jackson, Frank O’Donnell and anyone else that’s had to put up with me for footage or photos. And thanks Louis Slater of course. I guess at times like these the most enlightening thing I can say is to do what you can and to be forgiving to yourself and others. All flowers in time and that.

Perfect. You’re welcome man, keep doing what you do. “Do good things, good things will happen”. Stay safe mate. See you on the other side! 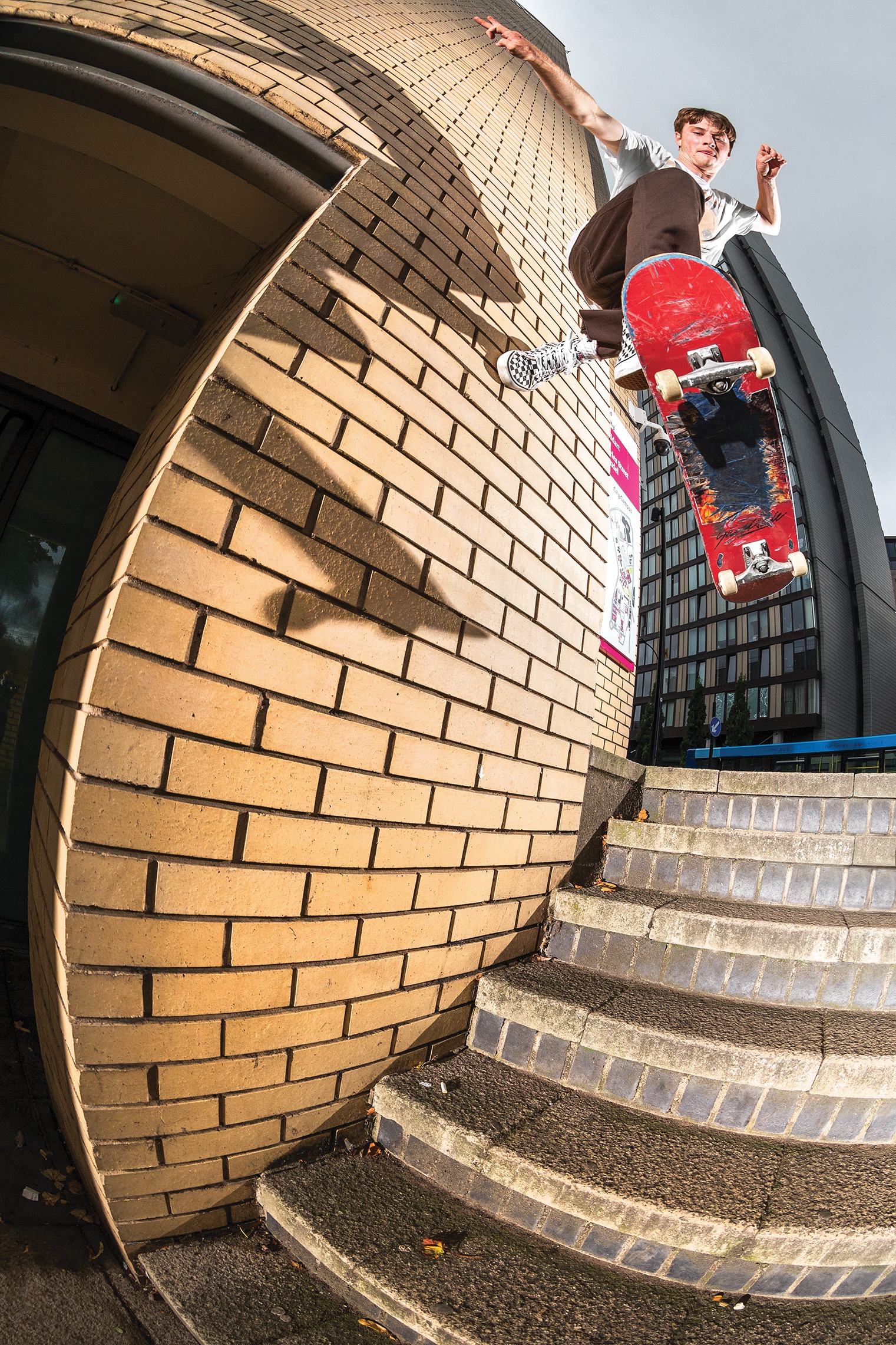 PEOPLE MOVE WITH THEIR HANDS by Frank O’Donnell

Order now! Shipping worldwide and free stickers with every order!