Manchester based doodler, shralper and all round top guy ‘Ginger Neil’ has recently launched his own woollen venture called ‘The Footsy Sock Market‘. See what this lej has to say in our interview with him about his new company and some of his artwork. Then feast your eyes on some glorious photos and a video part of this absolute shredder. 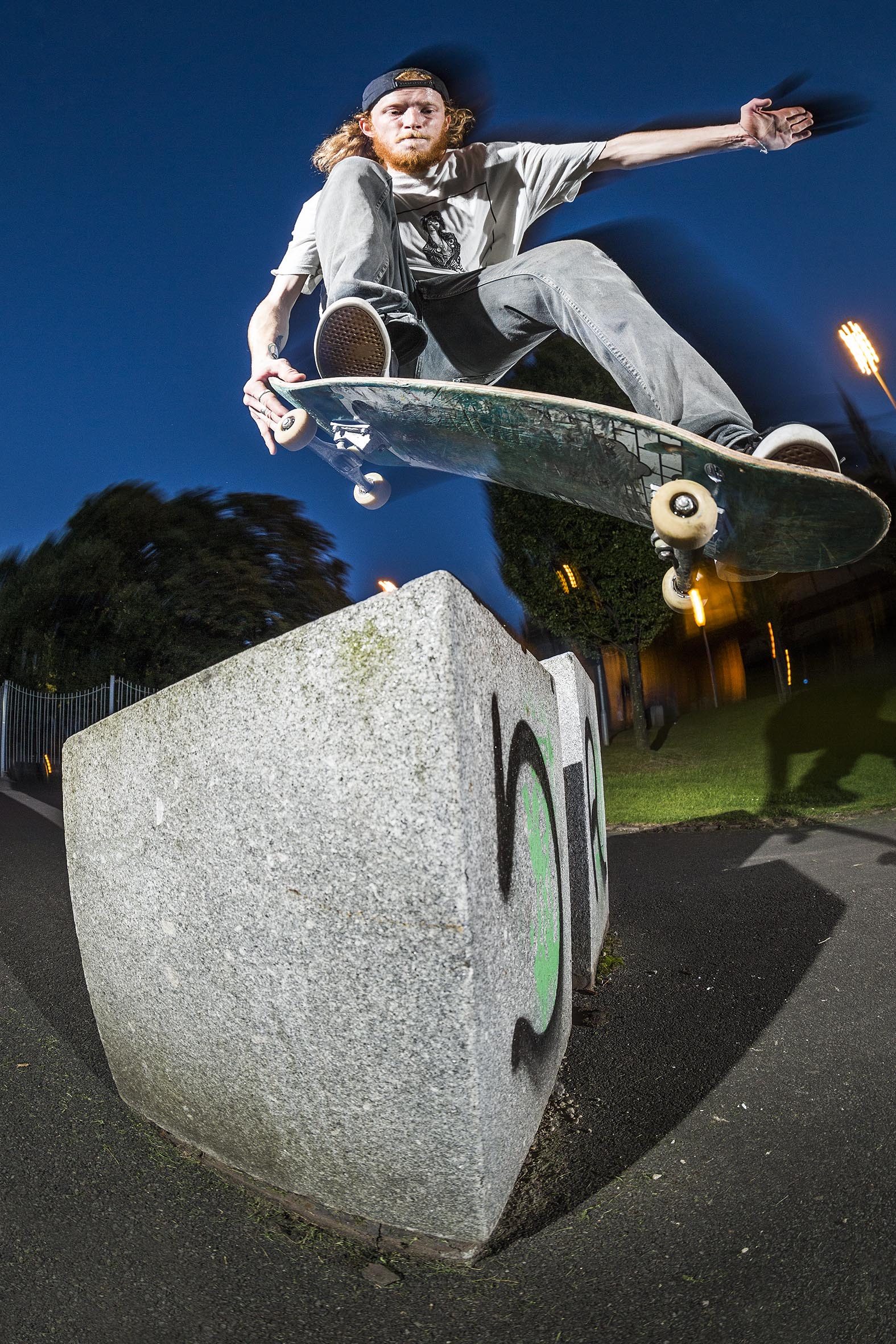 Who is behind ‘The Footsy Sock Market’ and what pushed you to start this company?

It’s all me baby! (Chuckles) I was lucky enough to find the source for the sock’s from Splodge at Note, then through the printers I work at I order in the shirts and sticker sheets where I cut and print them myself. As for the designs, I draw them out in a sketchbook and create sock mock-ups on photoshop, scan the sketches in and Photoshop magic the rest. I then send the images off to a Samson sock makers just 5 minutes out of Manchester city centre where they turn my designs into socks. 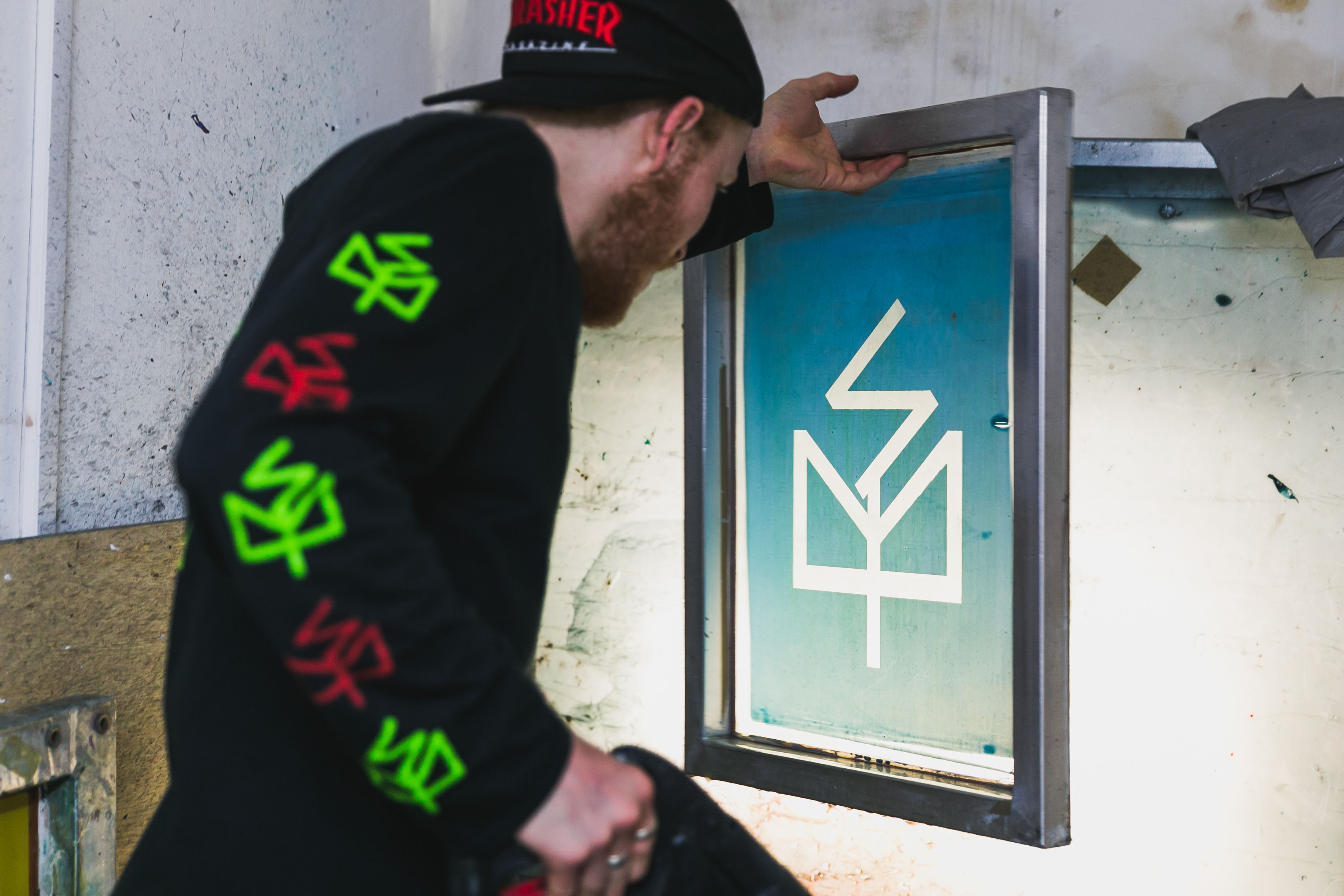 The factory is amazing inside, the owner also offered me a job but hasn’t followed through with the offer (Chuckles). I wouldn’t say I’m a master, but I’m learning as I go along. I never thought I’d be into textiles, but it’s somehow become my job and hobby. I’m always finding something new to make, I’m trying my hardest to not let myself fade out of this (Chuckles). 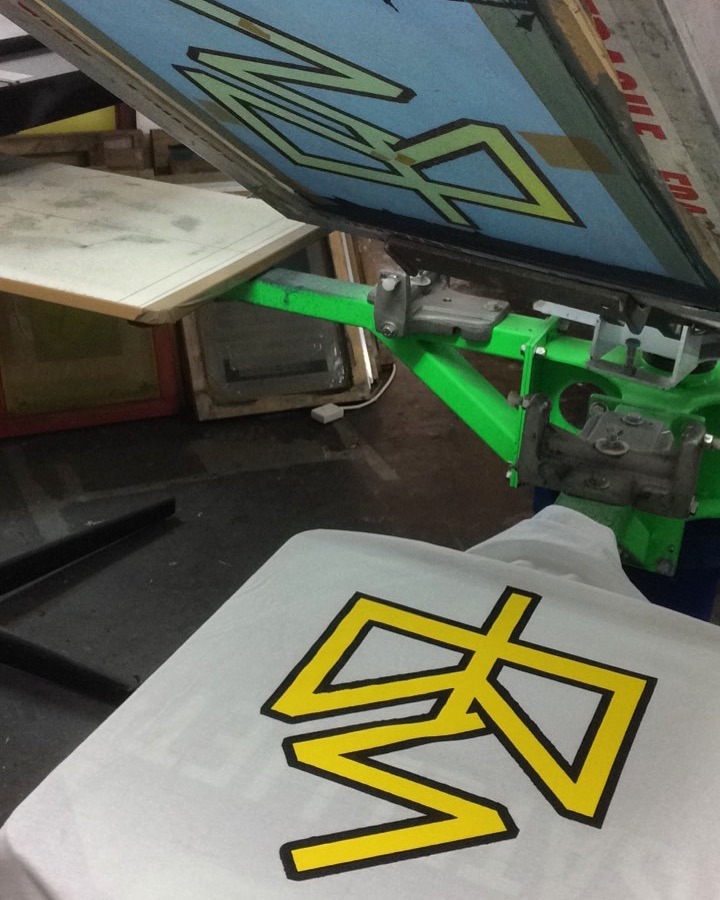 Is it possible to make a pair of socks with ankle support?

Ooooh a sock with an ankle support is a right idea! Cheers (Chuckles) I wouldn’t want to rely on wearing my socks, as people rely on ankle supports but I guess that could work out alright for me? 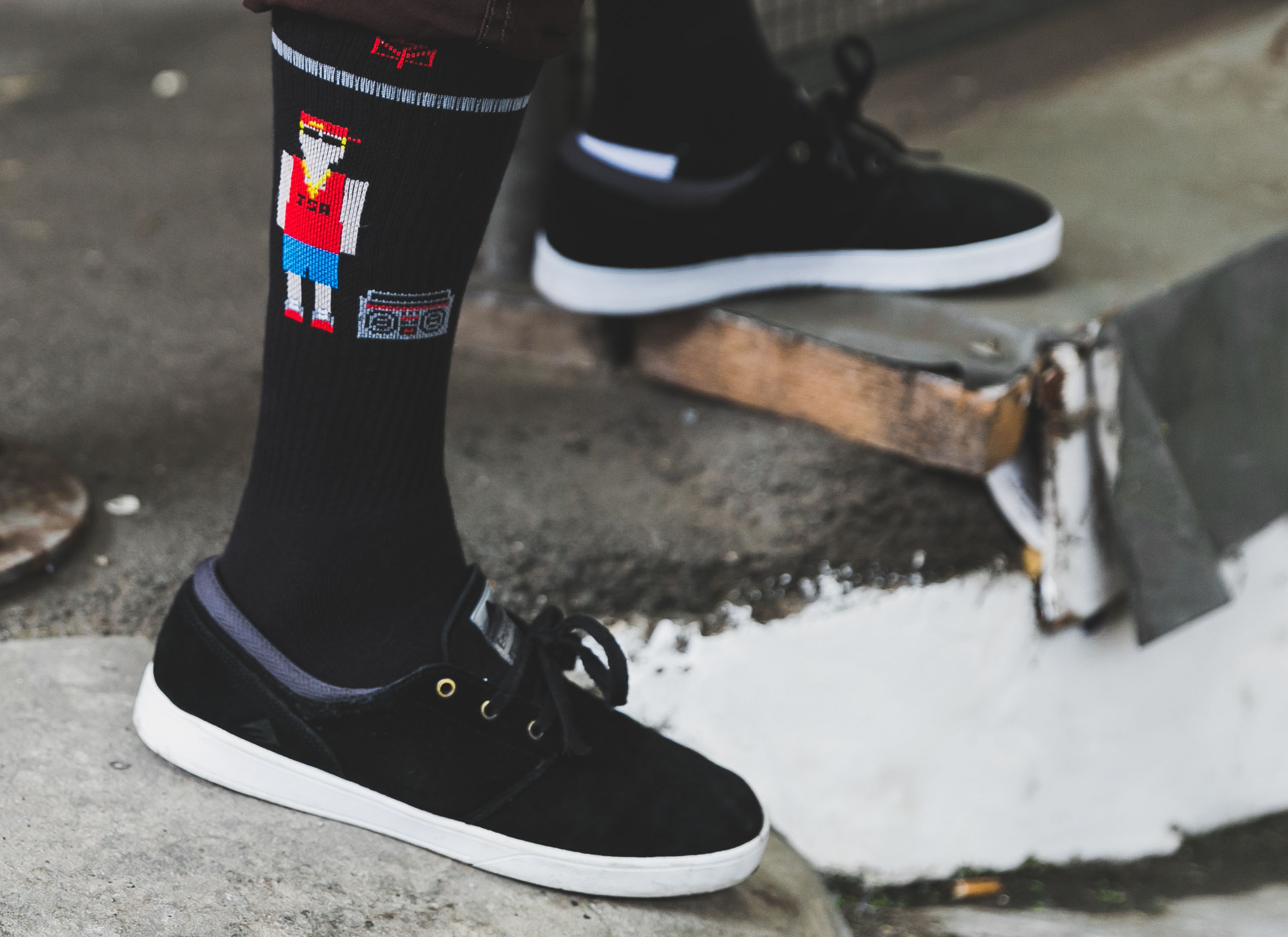 Have you seen the DVS Daewon part New shoes or No shoes?? That’s pretty much the best thing I can think of! (Chuckles)

Illusion (no foot on the ground) back 360 no-comply footplant. ~ Photo: Reece Leung

Prior to releasing the brand what socks did you wear before?

The whole reason I thought of the idea to start a sock company was because I kept buying Note’s own socks, they were the best socks I’d ever worn! I couldn’t keep buying them on the regs or else it would have broken my bank account! 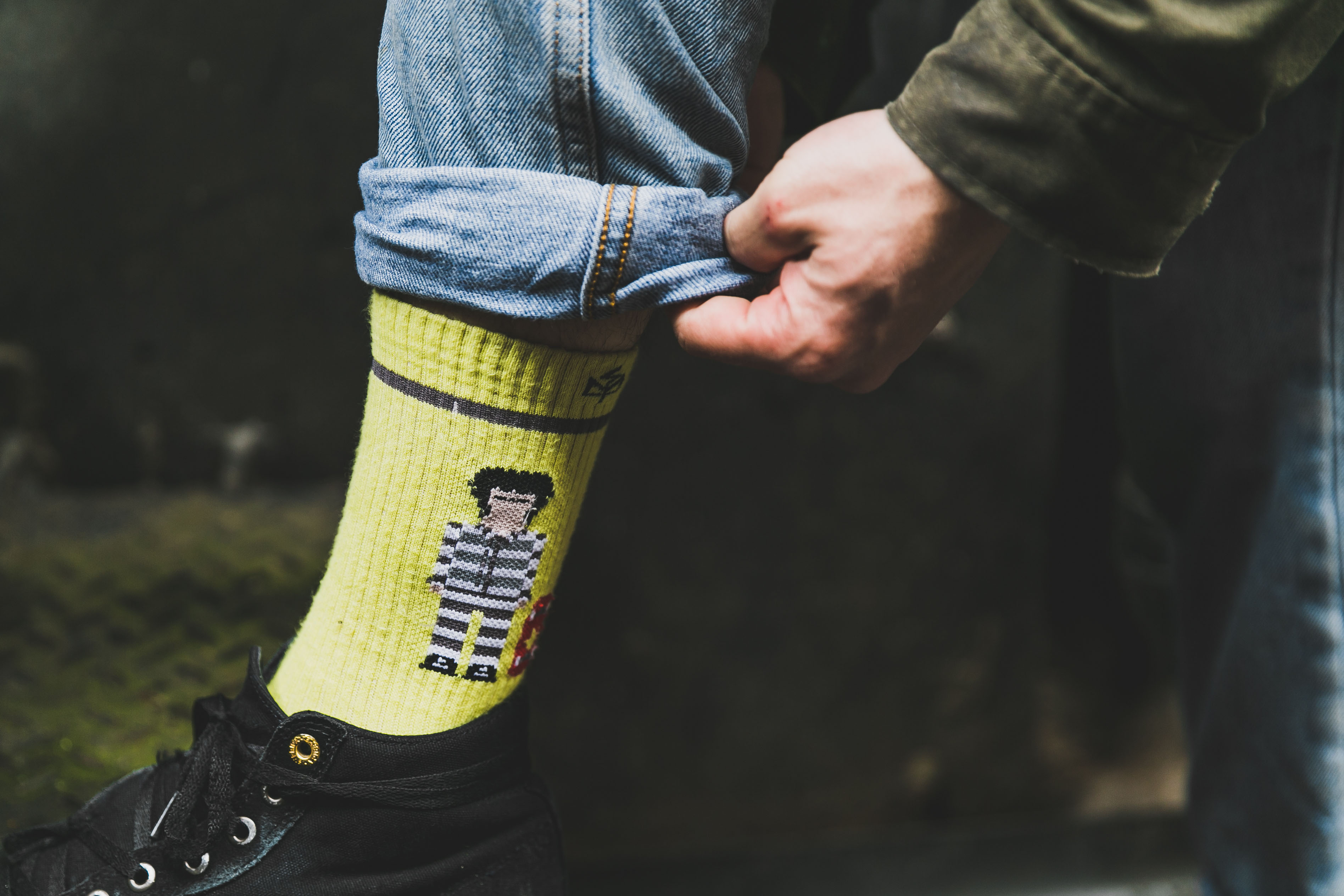 You’ve done graphics of the Gonz and Chad Muska, why these two icons and are they aware of their presence on people’s feet?

For some reason they were the first to come to mind, I guess they’re two of the main men in skateboarding which I and many others have looked up to. The fact that they have so many characteristics and get ups it was hard to decide which get up I was going to choose. That’s probably the hardest bit (Chuckles). 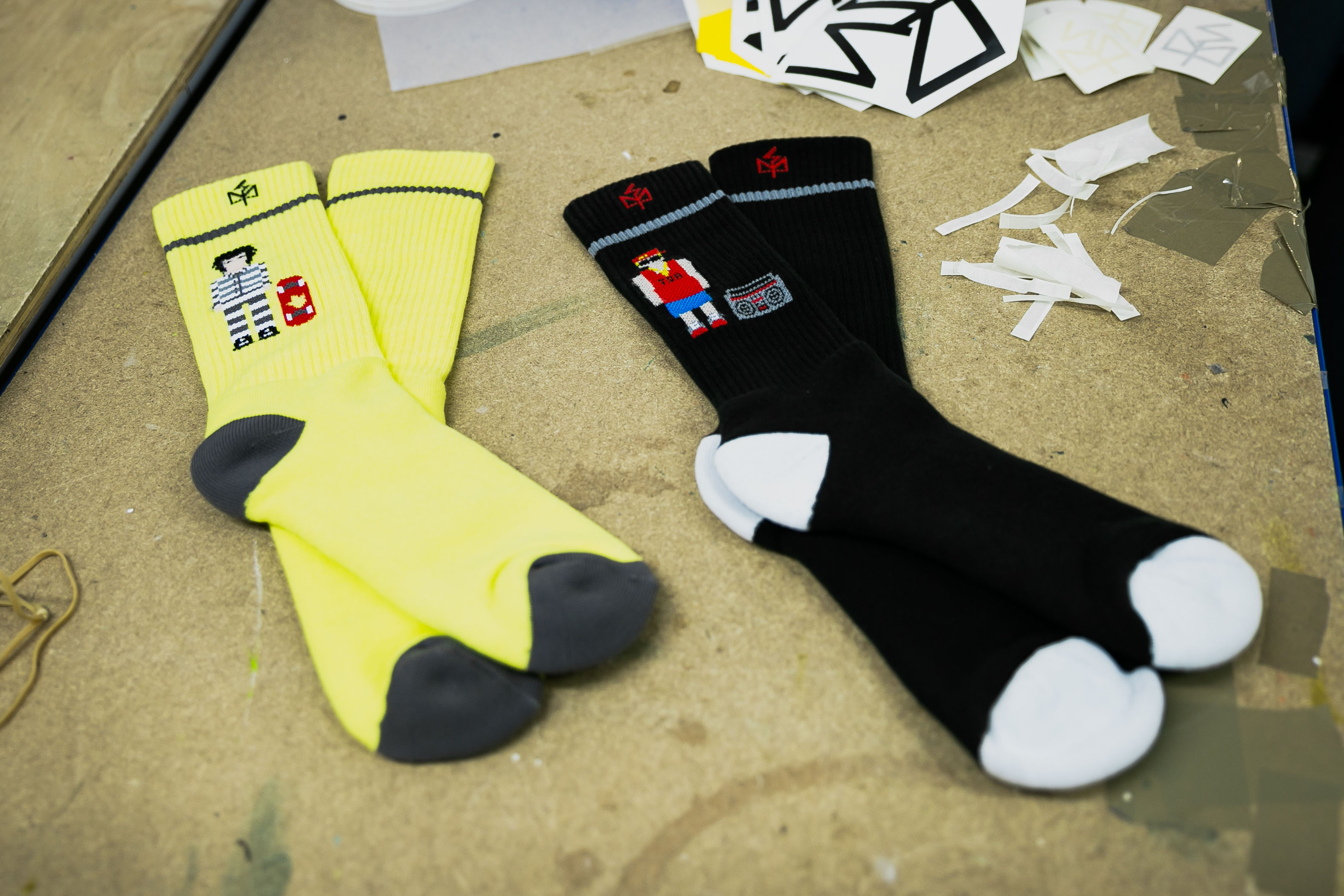 Have you tried sending any socks out to The Muska or The Gonz?

I messaged Muska on Instagram a while back and heard nothing from him, how else can I get in touch with him? I have a pair with his name on it! Same goes for the Gonz, I have no idea how to get in touch with him either! If you know anyone who does I’d happily send them some and hope they’d be cool with me using their image (Chuckles). I’ve got so many lined up and I’ve just finished the Hosoi sock! So hopefully that will be out around the same time as this interview. 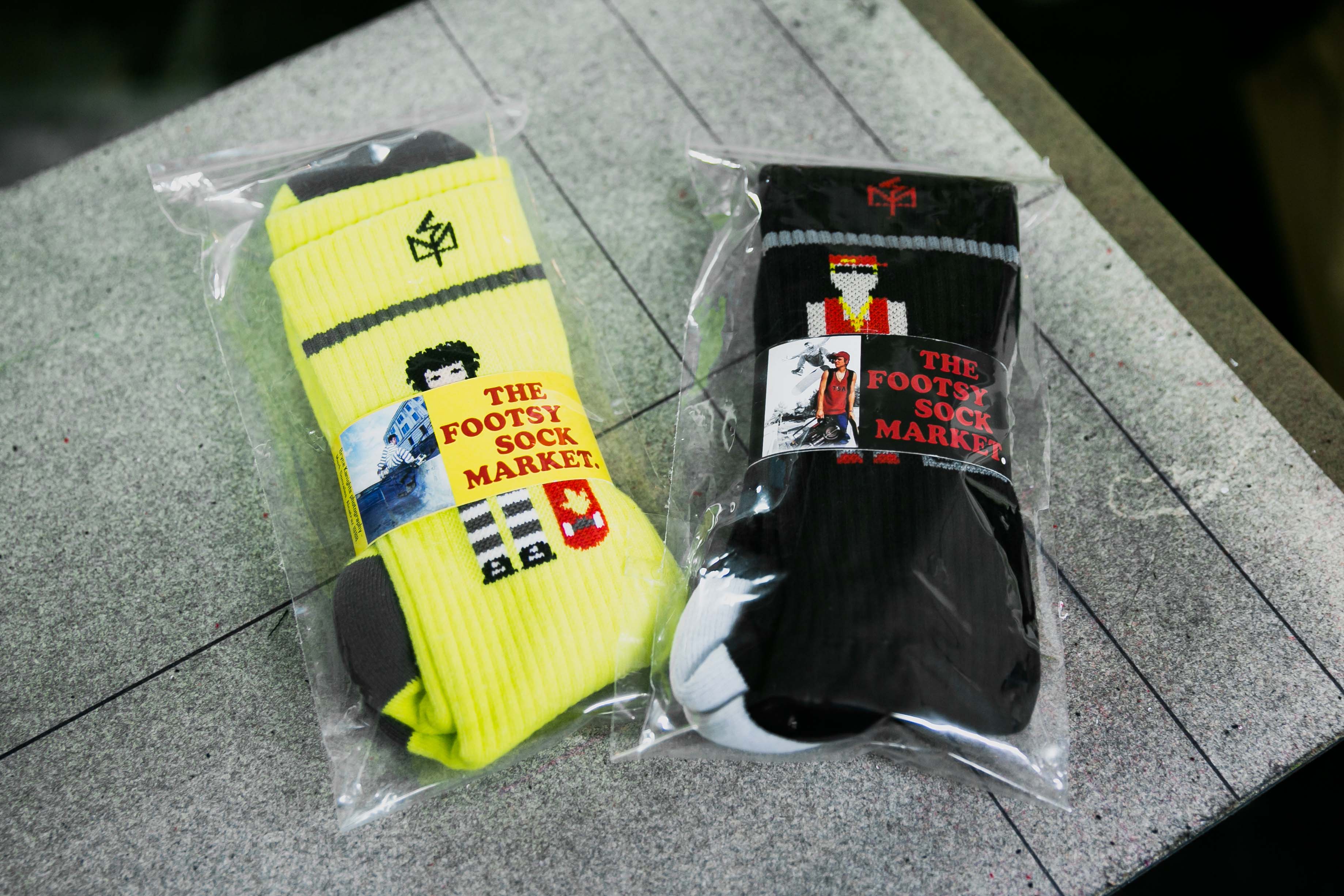 Have you any affiliation with the ‘Footsy STOCK Market’?

Nothing at all (Chuckles), I’ve been trying to interpret it in there but it’s just not the vibe I’m looking for! It’s just a cracking name my boss came up with after asking “What would name a sock company if you where to start one?” And without hesitation he came out with it, “The Footsy Sock Market”! It blew my mind and couldn’t think of anything better so I just used it (Chuckles) cheers Dave!

You also produce other apparel, are you going to move into some of the lesser seen clothing items within the skate community? Please do sweat bands!

(Chuckles) Oh don’t sweat that! I got sweat bands, head bands, bandanas and du-rags in the line up! I’m keen to try and get some beanies done at some point, we’ll see how well I do with the socks first. Torn clothes are in aren’t they? I should cut holes in the socks and start selling them to trendy fuck boys (Chuckles)! 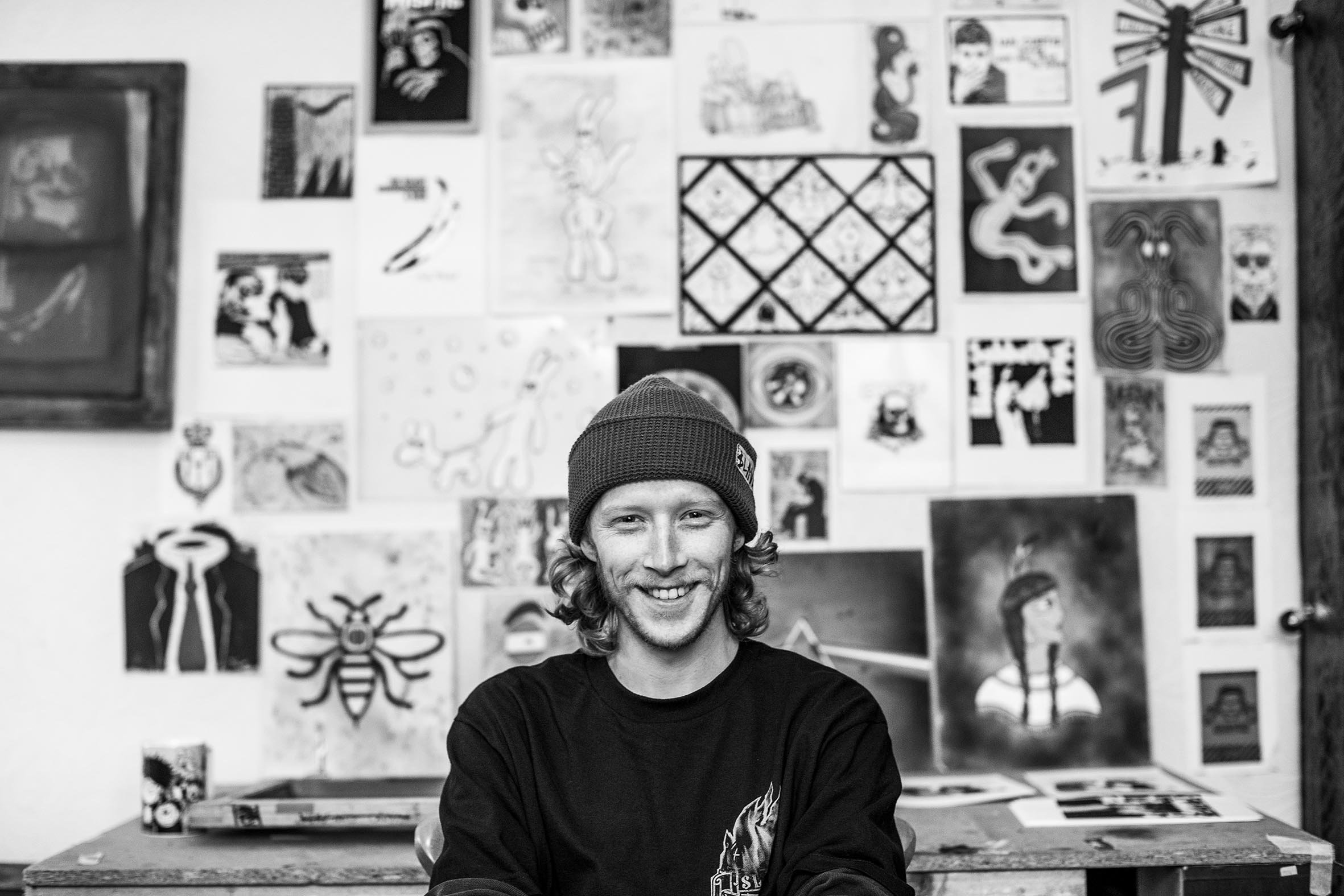 Alongside ‘The Footsy Sock Market’ you do a lot of your own artwork. You tend to work with a lot of different mediums within your art. What’s your main weapon of choice and why?

I don’t really have one to be honest, I spend my days working behind a screen print carousel printing clothing and I’m in the middle of a wood cut at home at the moment. I like to dabble between mediums but if I had to choose I’d go with a paint brush, finger width with black or white paint. Classic! 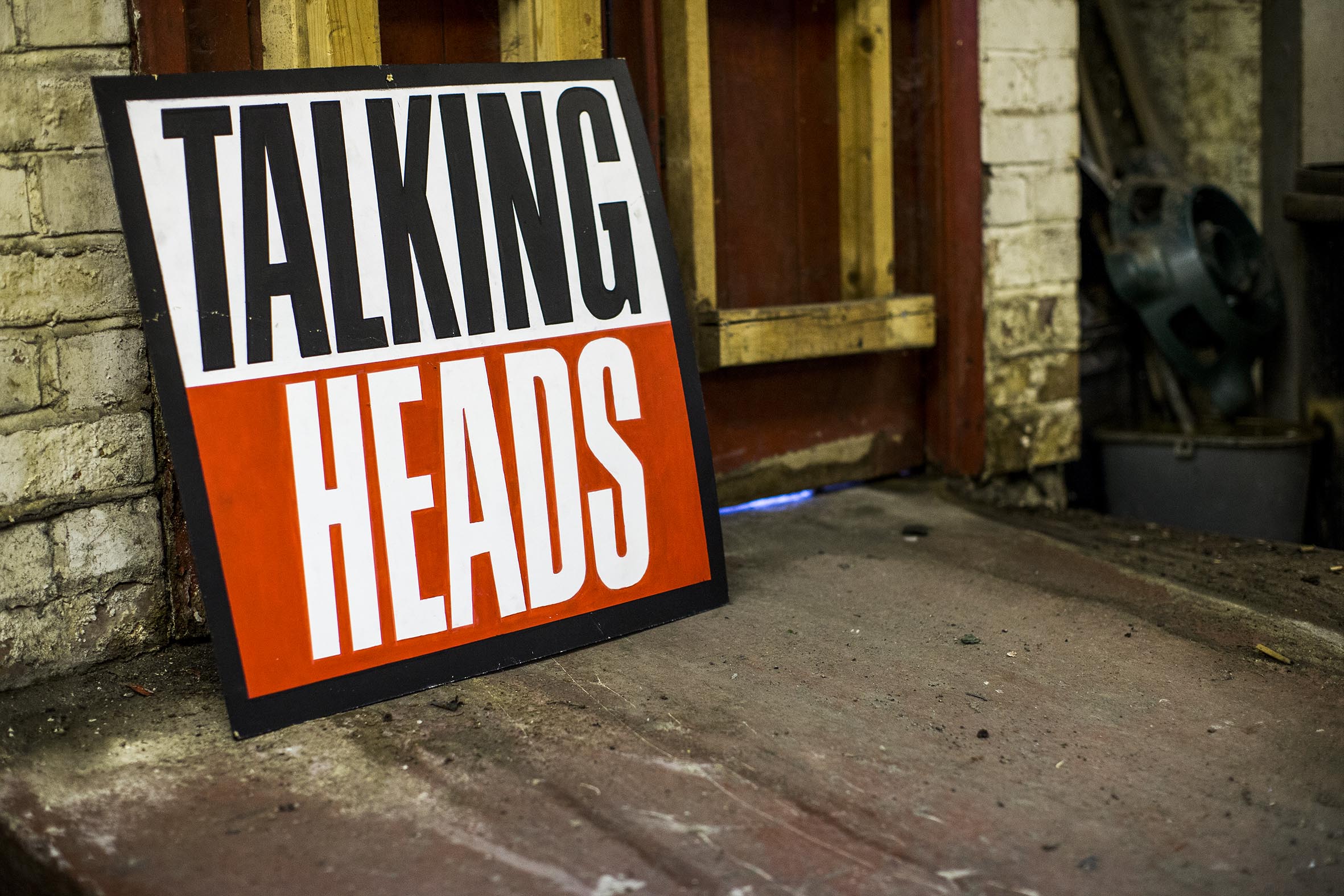 (Chuckles) That’s a wicked way of looking at it. Pens could definitely resemble street, you can carry one everywhere you go and do can it anywhere you want. I reckon painting would fit in nice with DIY, you’re gonna need a space with some brushes, tools and put a decent enough crew together and you could create a masterpiece (Chuckles). Vert/tranny is like print, mainly used indoors and you need a ton of equipment to do it.

Could you give us a background for remake remodel? Tell us about the 3D printing and painting whilst you’re at it if you’d be so kind.

Remake Remodel is an alternative/rock’n’roll music themed night at the Ruby Lounge in Manchester every first Saturday of the month. We would make objects and artwork that people coming into the venue could interact with. I’m pretty sure they still happen, go check it out. 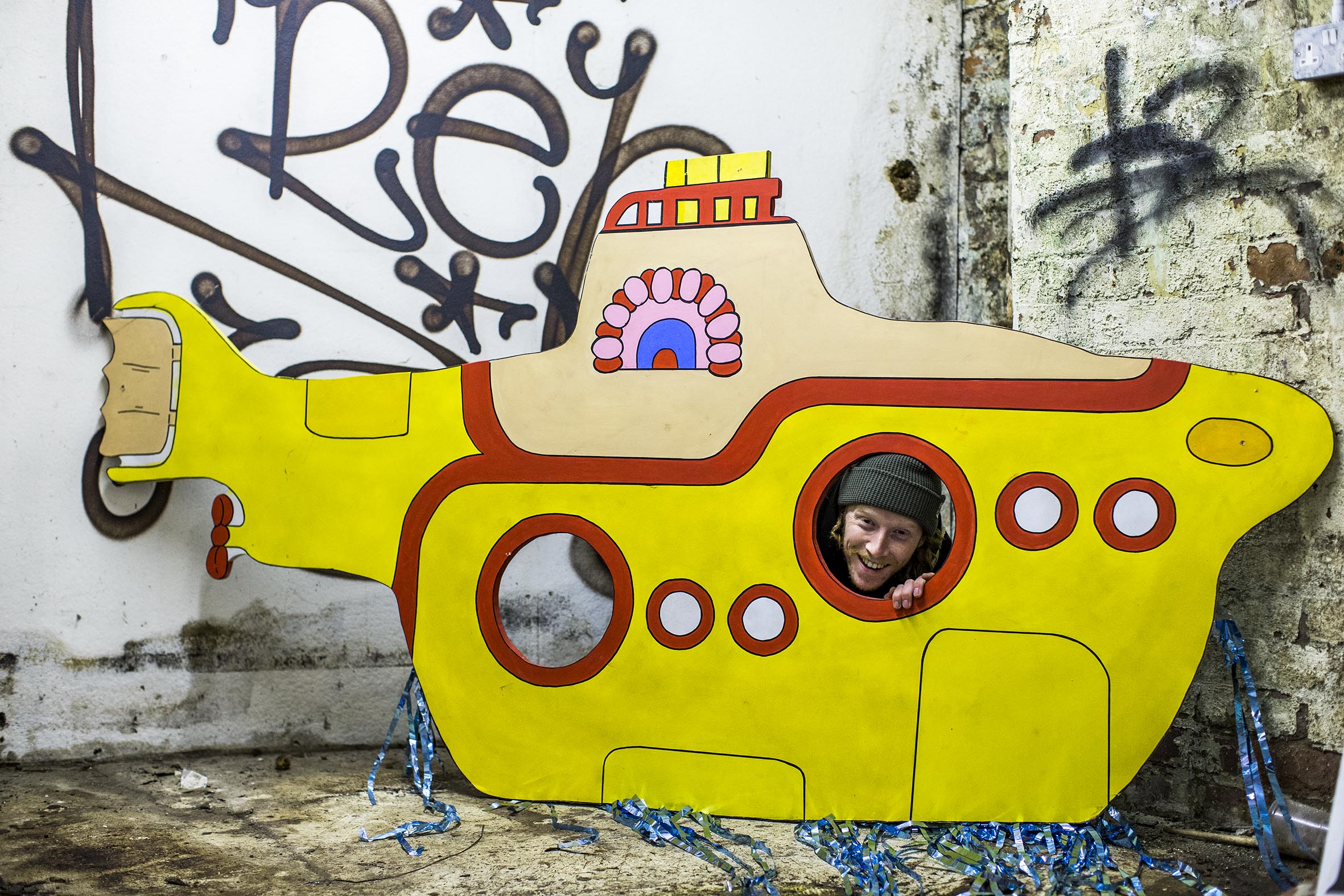 ‘Face in the hole’ pieces by Neil. ~ Photo: Reece Leung

I mainly made the entrance signs and photo booth/ ‘face in the hole’ board things. It was always rad working with that crew and the studio space was became a home for a while. R.I.P Hotspur. Dave Morgan helped out a little now and again too, cheers Dave! It started by helping them set up Cosmosis festival at Victoria warehouse near Old Trafford, it was zodiac themed, I put together a set of fairly large animal heads out of card to stick around the rooms. 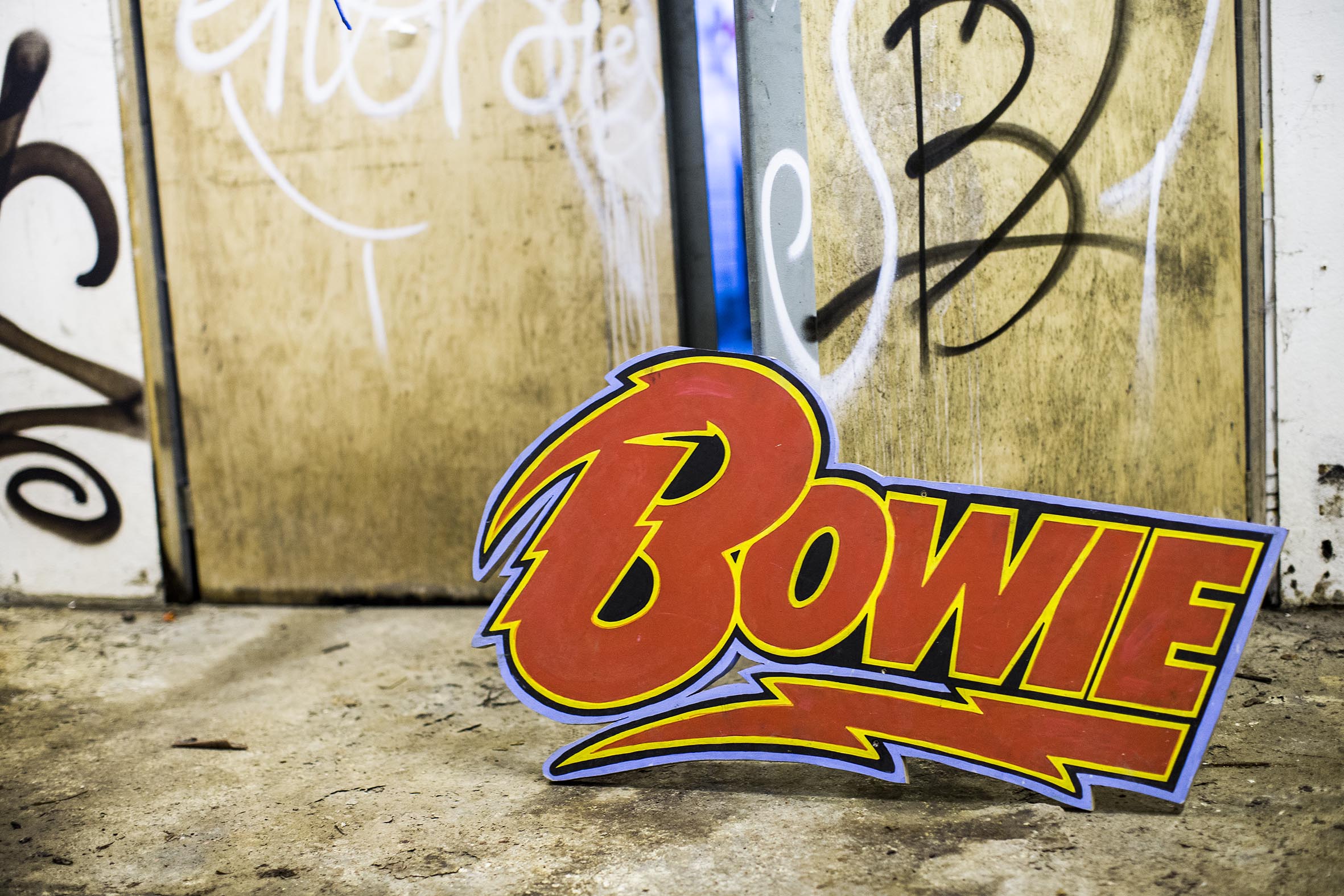 We also built a Hobbit’s house and massive mushrooms amongst other bits and other people’s work. The festival ended up being ridiculous, probably one of the maddest days/nights I’ve had. The venue became our playhouse, we were building in there for two days so we knew it in n’ out. We had to pack up at 7am the next day, that came around quick enough and wasn’t a problem. I also ate half of someone’s muffin from the Brian Jonestown Massacre, I guess I’ll end it on that (Chuckles). 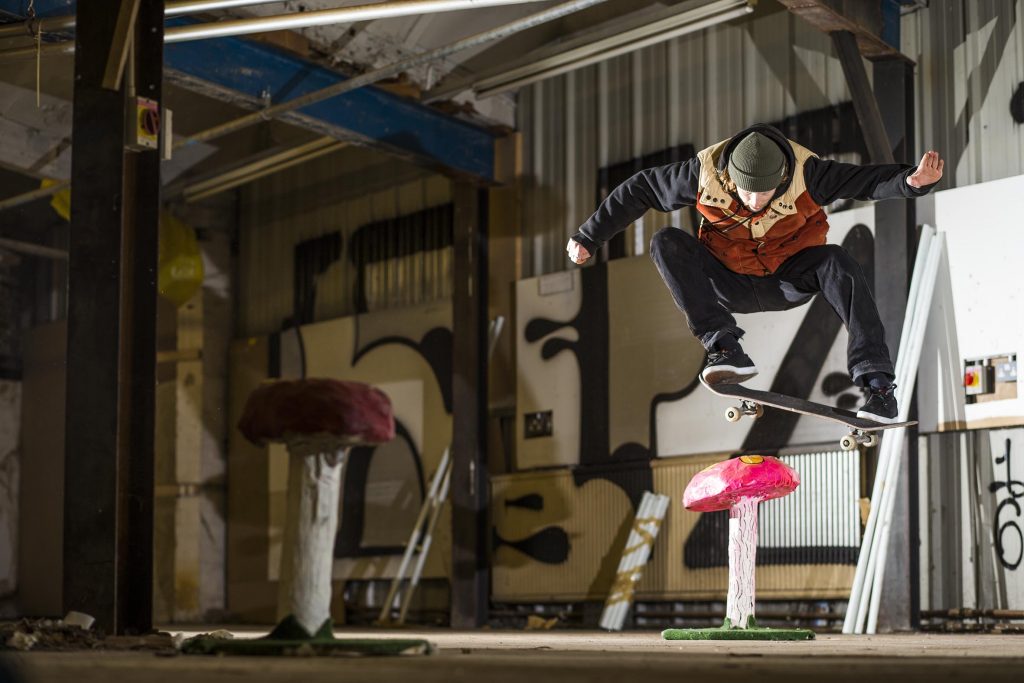 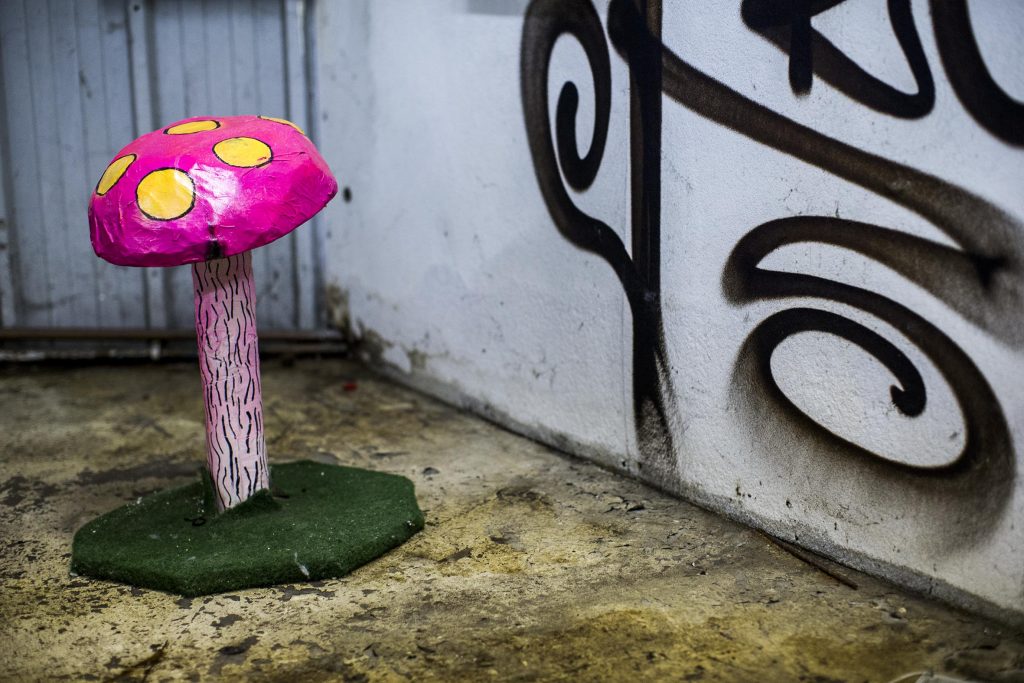 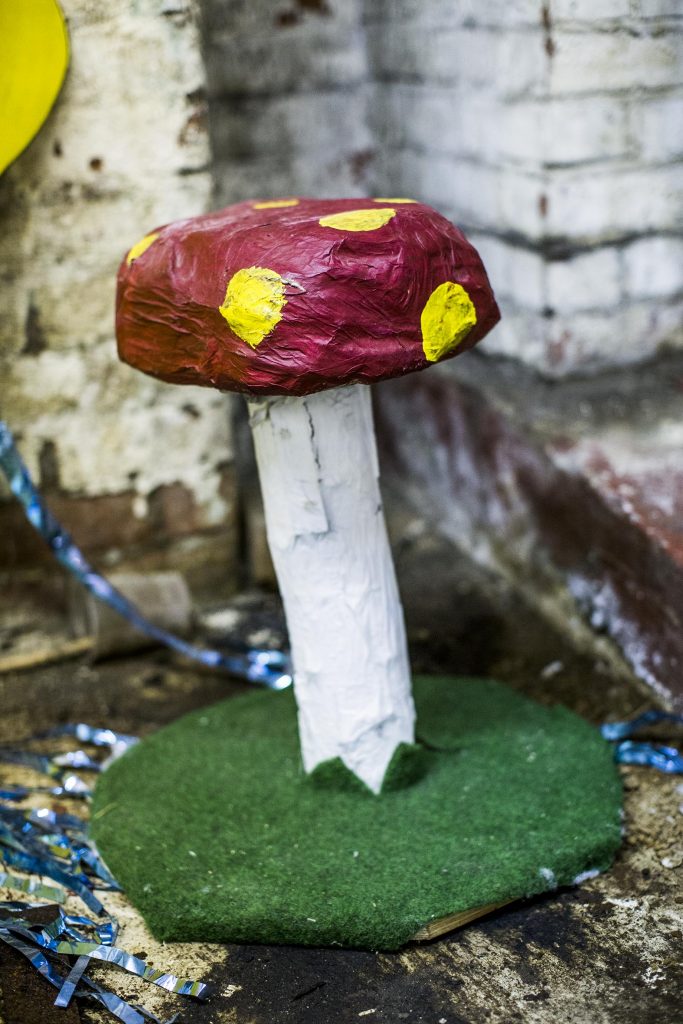 How’s The ‘Ghost Man’ and what’s he been upto/got planned for the future?

The ‘Ghost Man’ I draw or Rob Owen (nicknamed Ghostman)? (Chuckles) The one I draw has faded away for a bit, you know when you’re just not to sure? We’re a lot alike, we fade in and out! 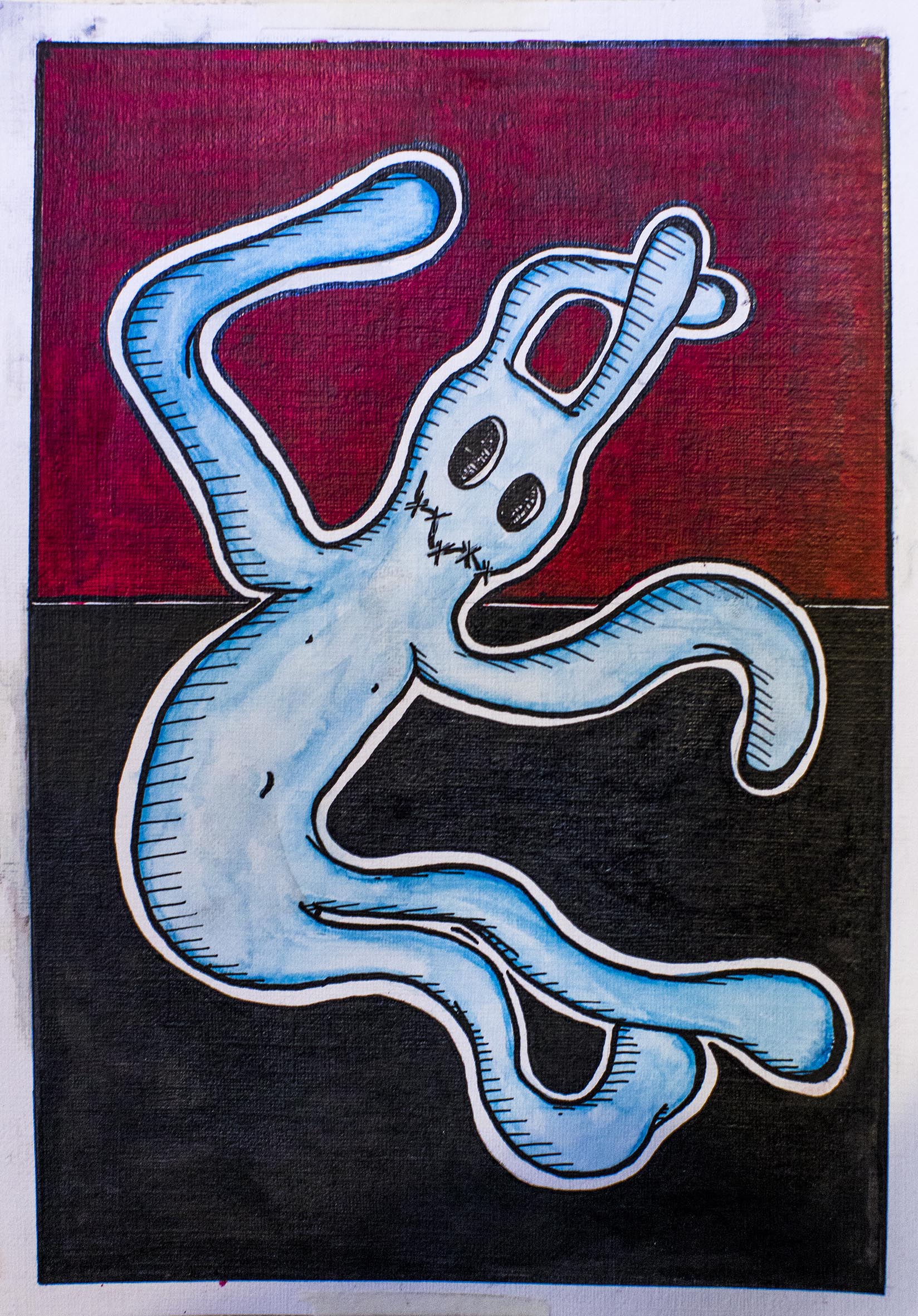 When was the last time you had plain griptape? 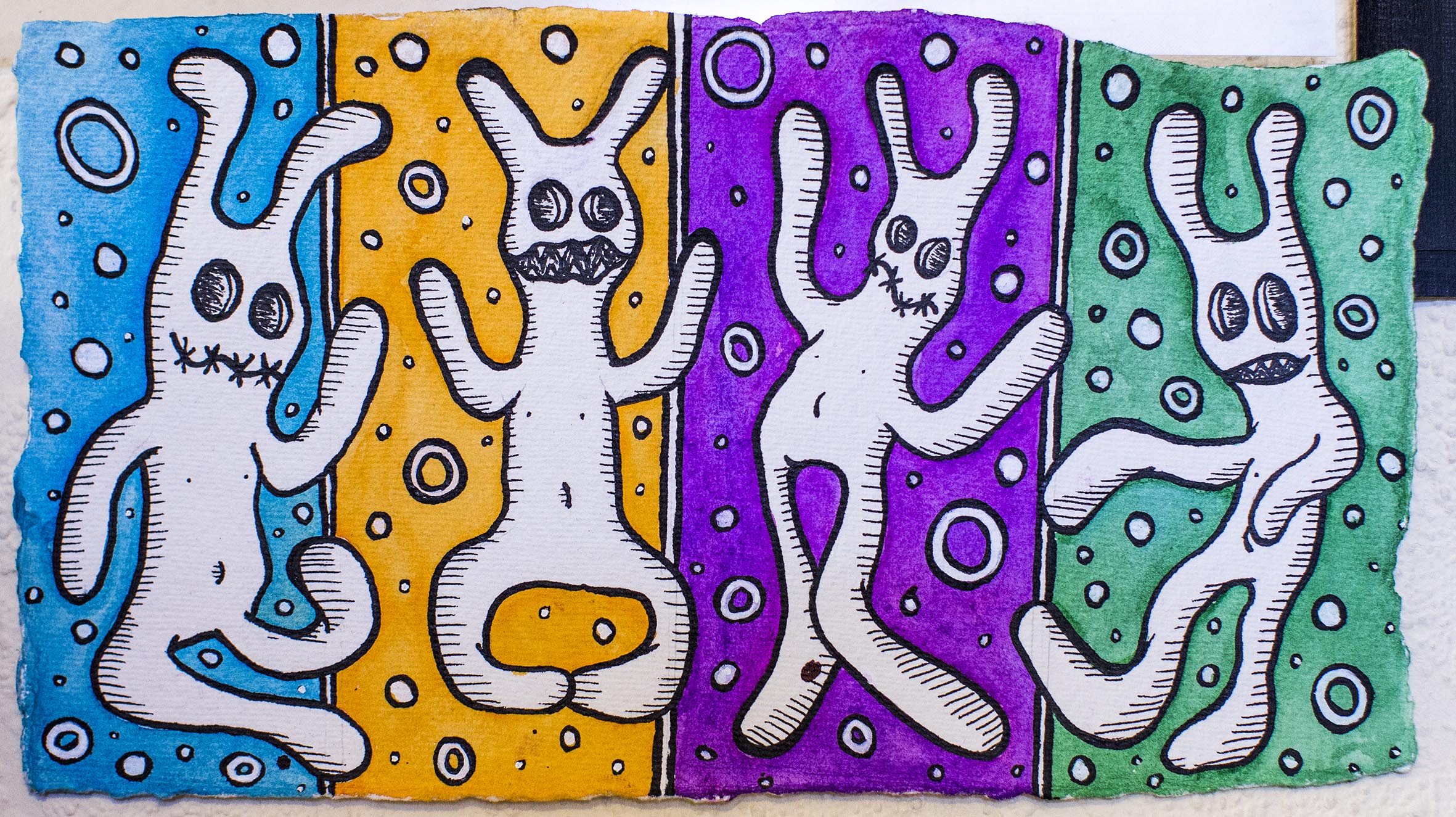 Are there any TFSM collabs in the works?

Since starting it ideas have been sparking left, right and centre from everyone. I had a little laugh about with Jed Coldwell (GanjWax CEO) after he asked where I had the socks made but we’ll have to see about that. (Chuckles) Alex Lamb who runs Avenue skateboards/clothing was pretty keen to collaborate as the logo’s work pretty well together. 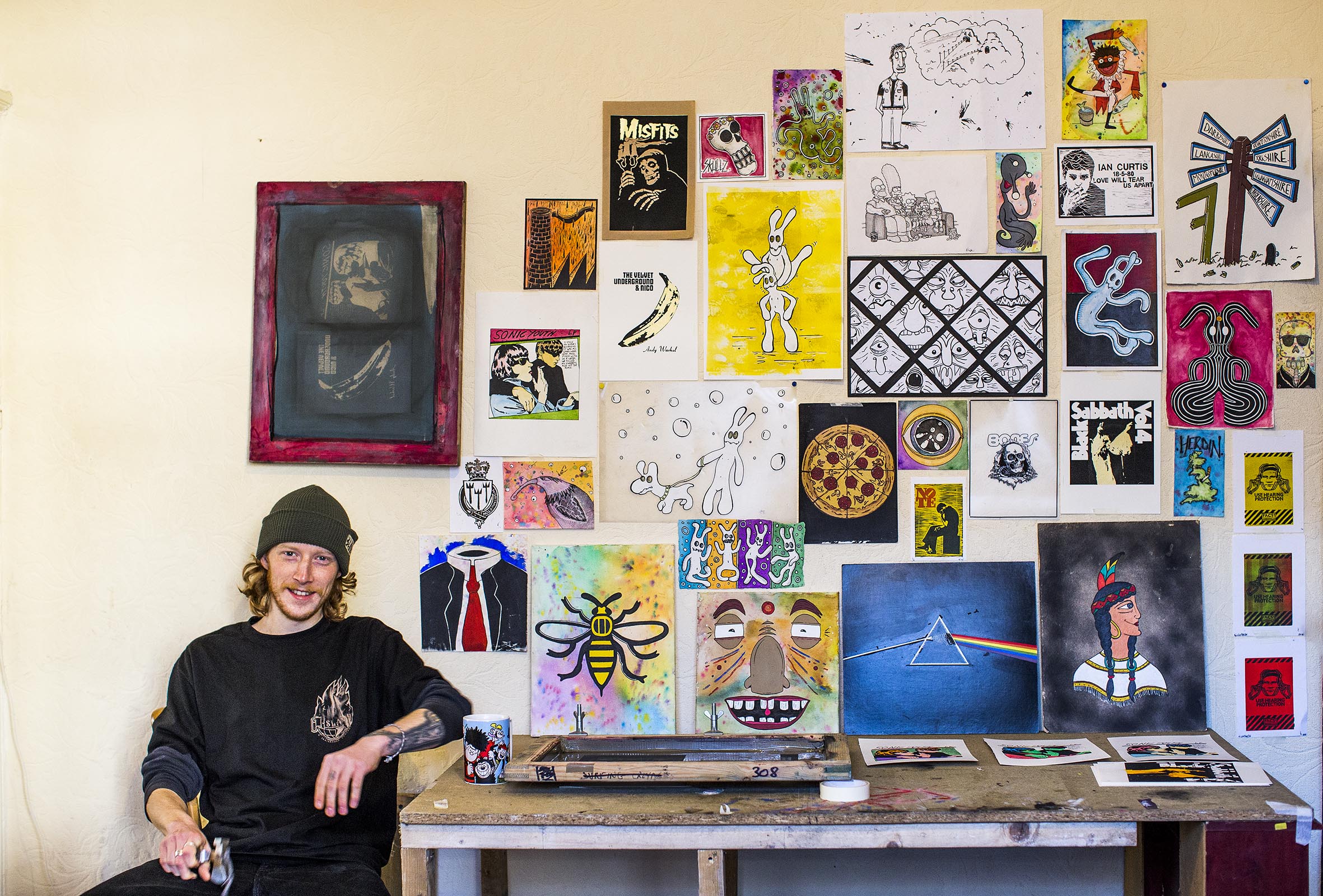 Will there be any Simpsons homages with TFSM or strictly skating?

That’d be the best thing ever to have a Simpsons collab sock, I reckon Matt Groening would dig it? So why not! (Chuckles) 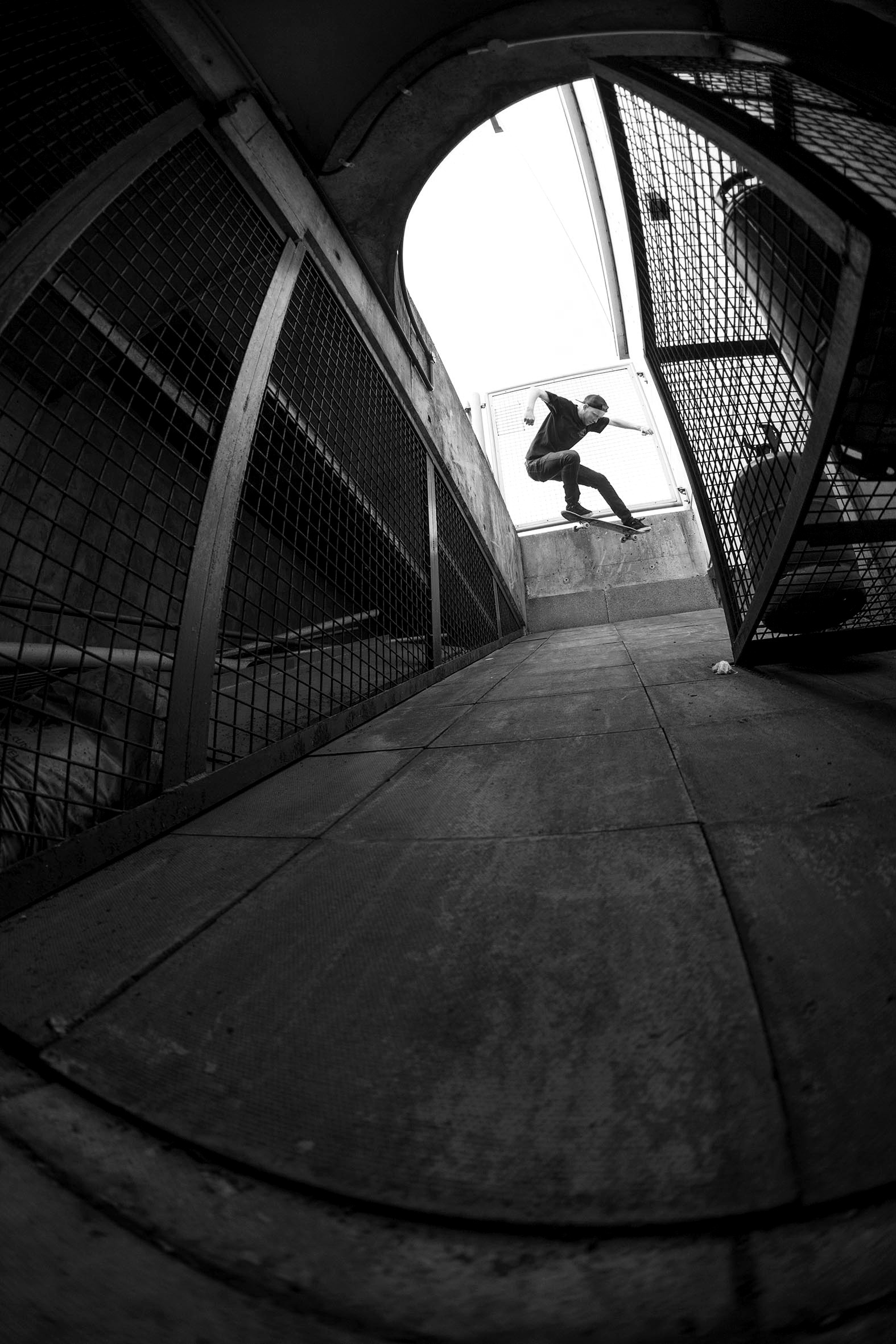 If Skater Owned Stores want to stock your product how can they contact you?

I’m trying to get a little money behind it at first and just seeing where it could go, and I’ve had a few shops already say they would stock the socks and tees which is excellent to hear! I’d love to have them in shops but I’m not sure it’s the right move right away. But when I’m ready I’ll let you all know! Unless you want to make an offer? (Chuckles)

Filmed and Edited by: Jim Craven