Andy Evans releases a new video with us in which he explores the traditional ‘Village Skater’ in his classic tongue in cheek style. As part of his research he linked up with the finest villager of them all: James Ploughman MBE who shows him the ropes, ellaborates on village etiquette, shows him the best spots a village has to offer and demonstrates a very powerful nasal stall. Andy then documents the talented Diggs English, a younger village skater who just turned 12. Diggs puts out a full section in this video, which we’re hyped to present you, the part also features cameos from Matt Ransom, Lucy Adams, Stevie Thompson, Evan Johnson and Marcus Raven!  To coincide with this video Andy asked James and Diggs a few questions, have a read and watch below to educate yourself on your typical village skater. 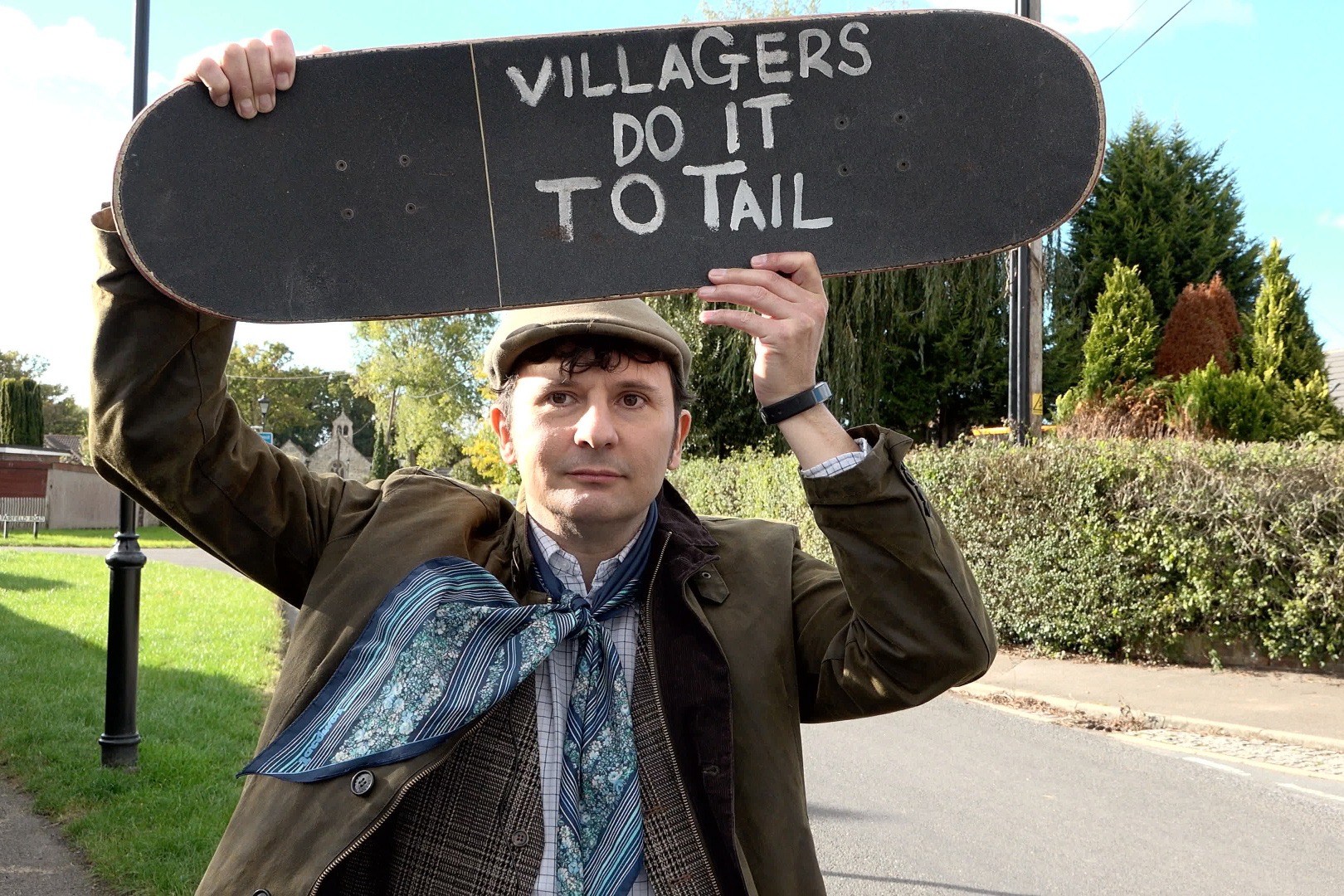 The UK is home to many types of skaters but, over the years, one kind has been a little neglected. They have always been with us but are not so well understood, partly because they have been traditionally a tad reclusive. Now, the climate seems right to shine a light on this lesser seen but often misunderstood genre of skaters. They are more tranquil skaters…. more rural skaters…  tt’s time to celebrate the ‘village skater’.

One of the most famous ‘village skaters’ in the UK  is James Ploughman MBE, who resides in a small village in rural Sussex called Ashington.  Recently, James has been the feature of a ‘village skater’ themed video along with up-and-coming village skater Diggory English. I caught up with them both to ask about the video and also being village skaters. 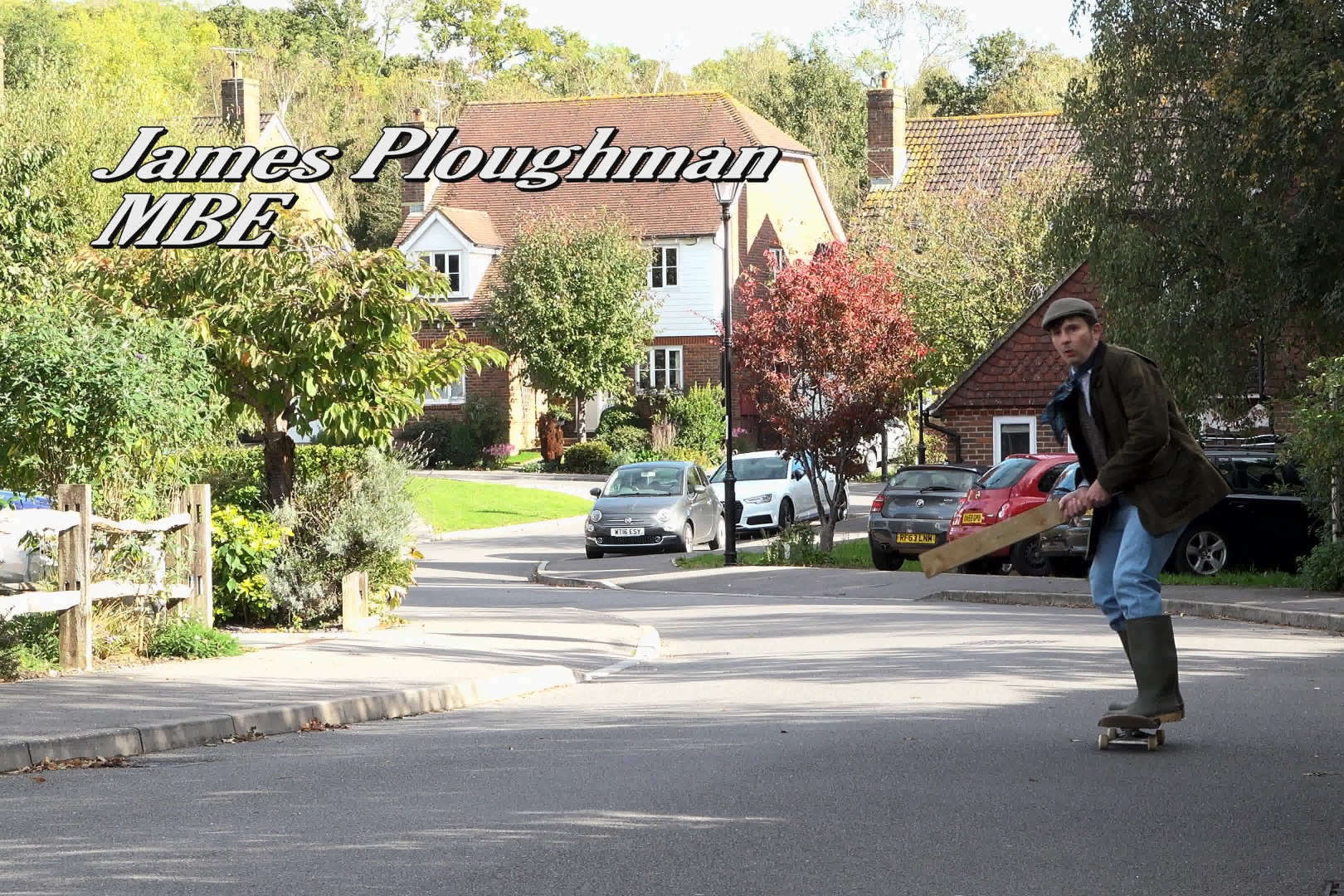 James, what was it like growing up as a village skater in Ashington?

Overall, it was good. I feel like my stamina is better than people growing up in the cities due to the fresh air and the vegetables that Dad used to grow in the garden. You can’t beat a lovely fresh-picked turnip. This helped me massively as a teenager with my eight minute miniramp runs. There are no takeaway places in the village which is another reason all the skateboarders are in supreme physical shape. We are as fit as fiddles.

Take older skater Bob Cheeseman, who taught me all the skateboarding basics. If he wasn’t working on the land, he was collecting and chopping wood for the winter or walking to the village shop. He always had time for us youngsters though and would often be teaching us new tricks at the skatepark. You never felt lonely here like people in the cities do. In Ashington, everyone knows each other. 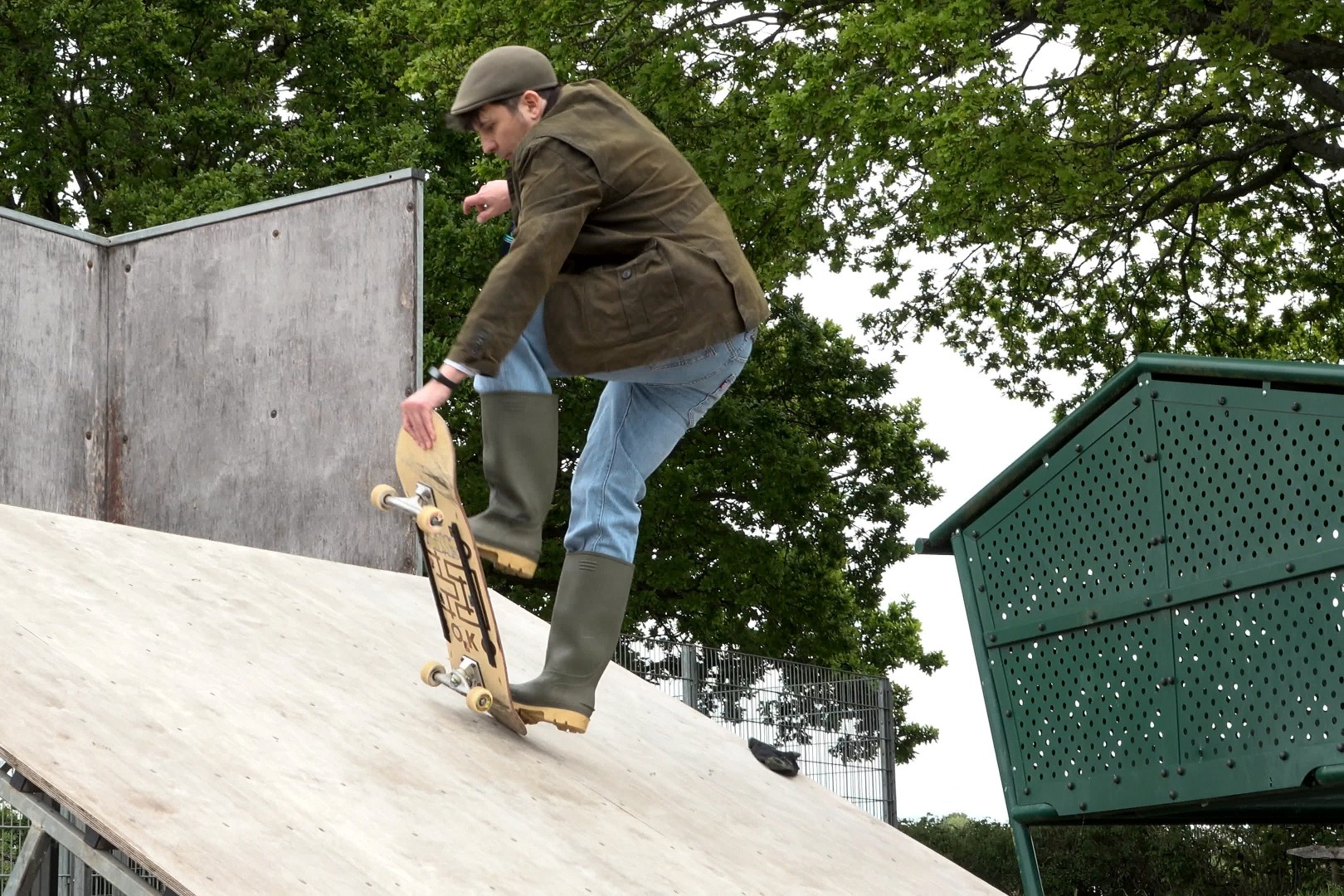 Have there been any famous skaters from Ashington?

Clinton Wilmot was in a photo in Skate Action magazine in the late eighties. It was an eighth of a page photo in which he was pictured in the background at an H-Street demo. Well, he says that it was him but the resolution of the photo was low so we will never know for sure. 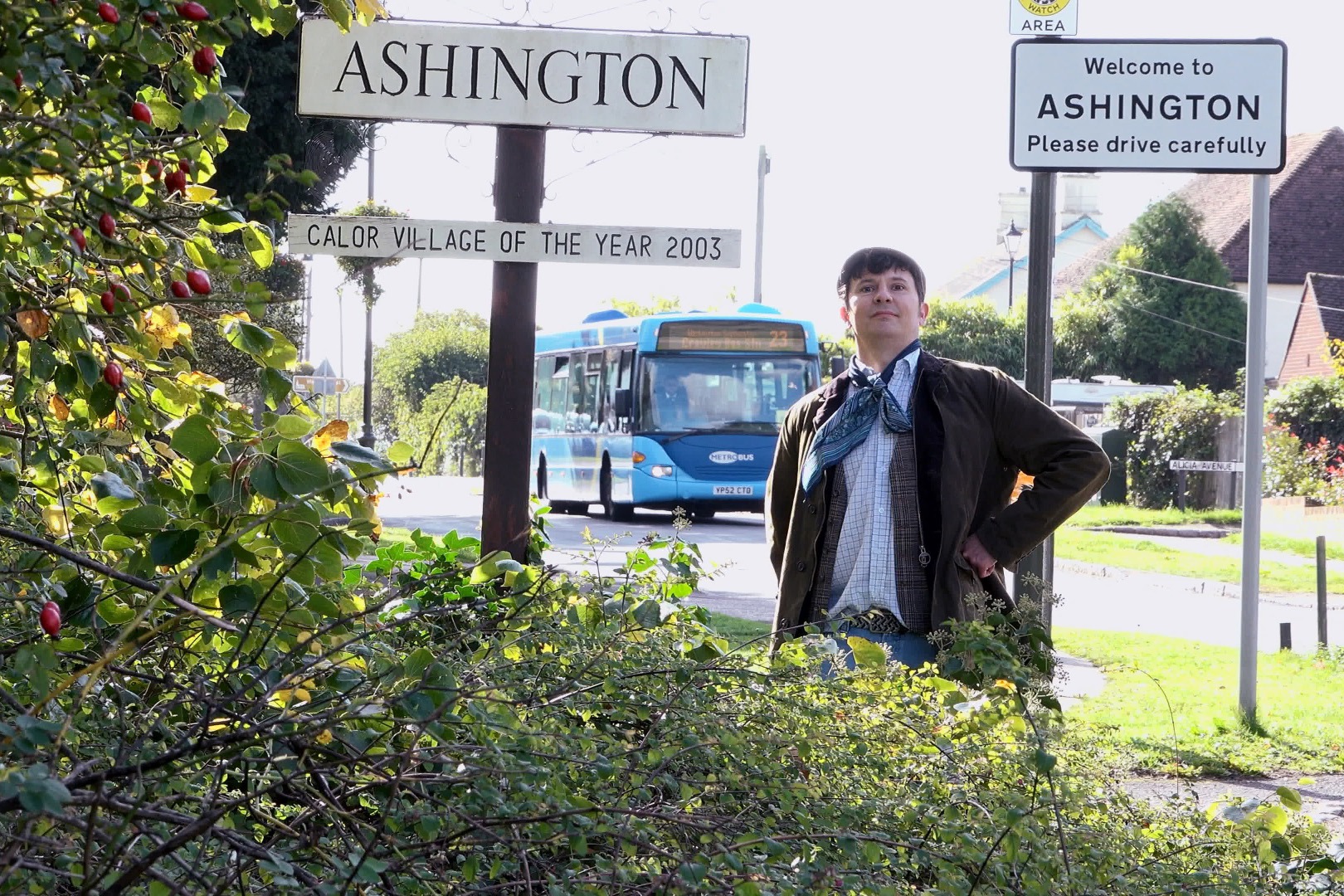 What is it that makes you think you’re a village legend?

Oh, where does one start? I’ll mention a few of my many amazing feats. I once did a nosepick on top of three bales of hay out of mad Stee’s launch ramp. I also kickflipped a puddle that was two feet long. It was spitting at the time, which made it more difficult. Also, I needed the toilet. I cleared the puddle by two inches! Maggie the local florist came out from her shop and clapped and cheered me. I’m also faster than a horse down the local hill on my longboard. 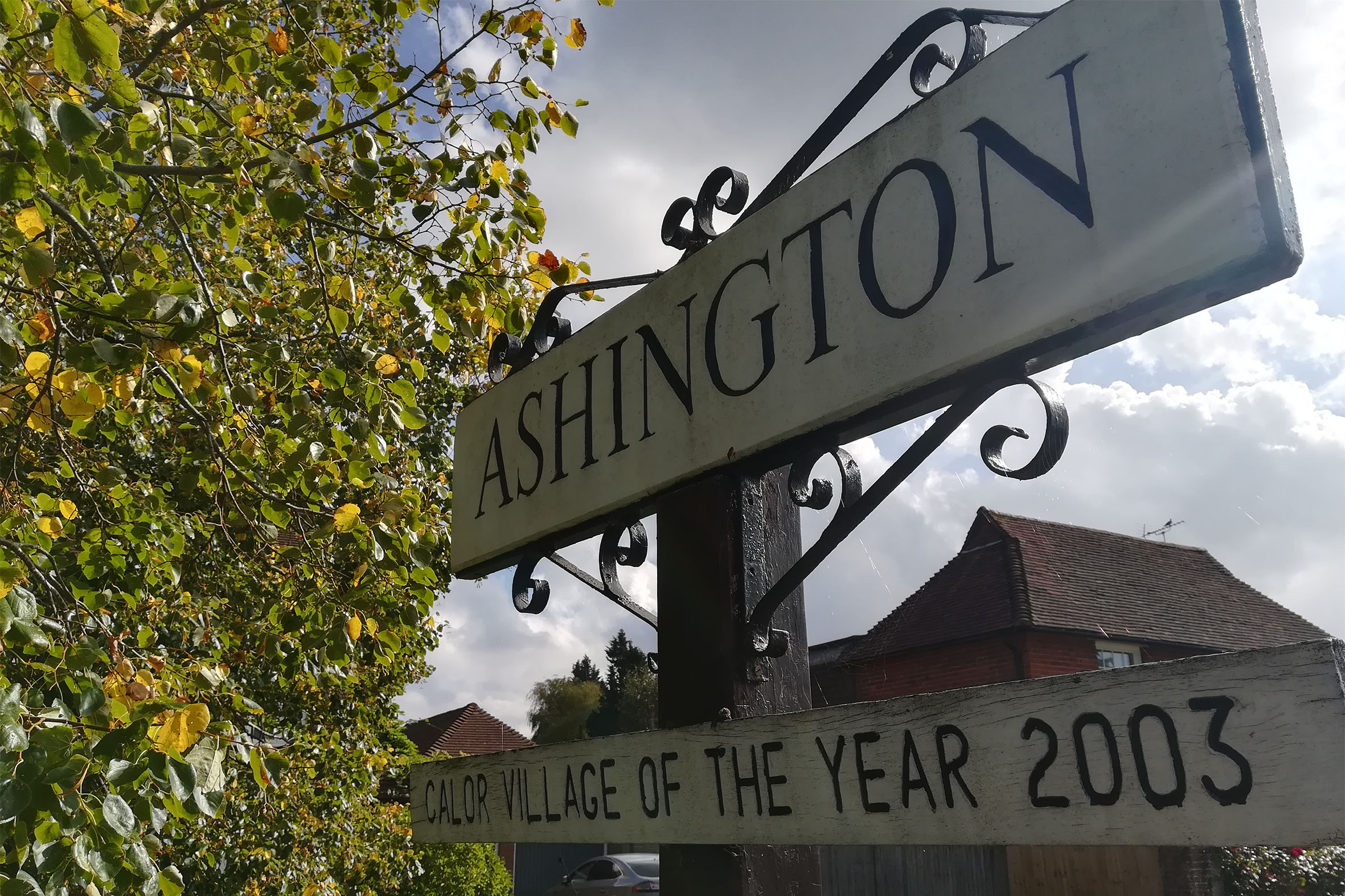 I heard it was a Shetland pony that you raced?

Yeah, but that’s still a horse. 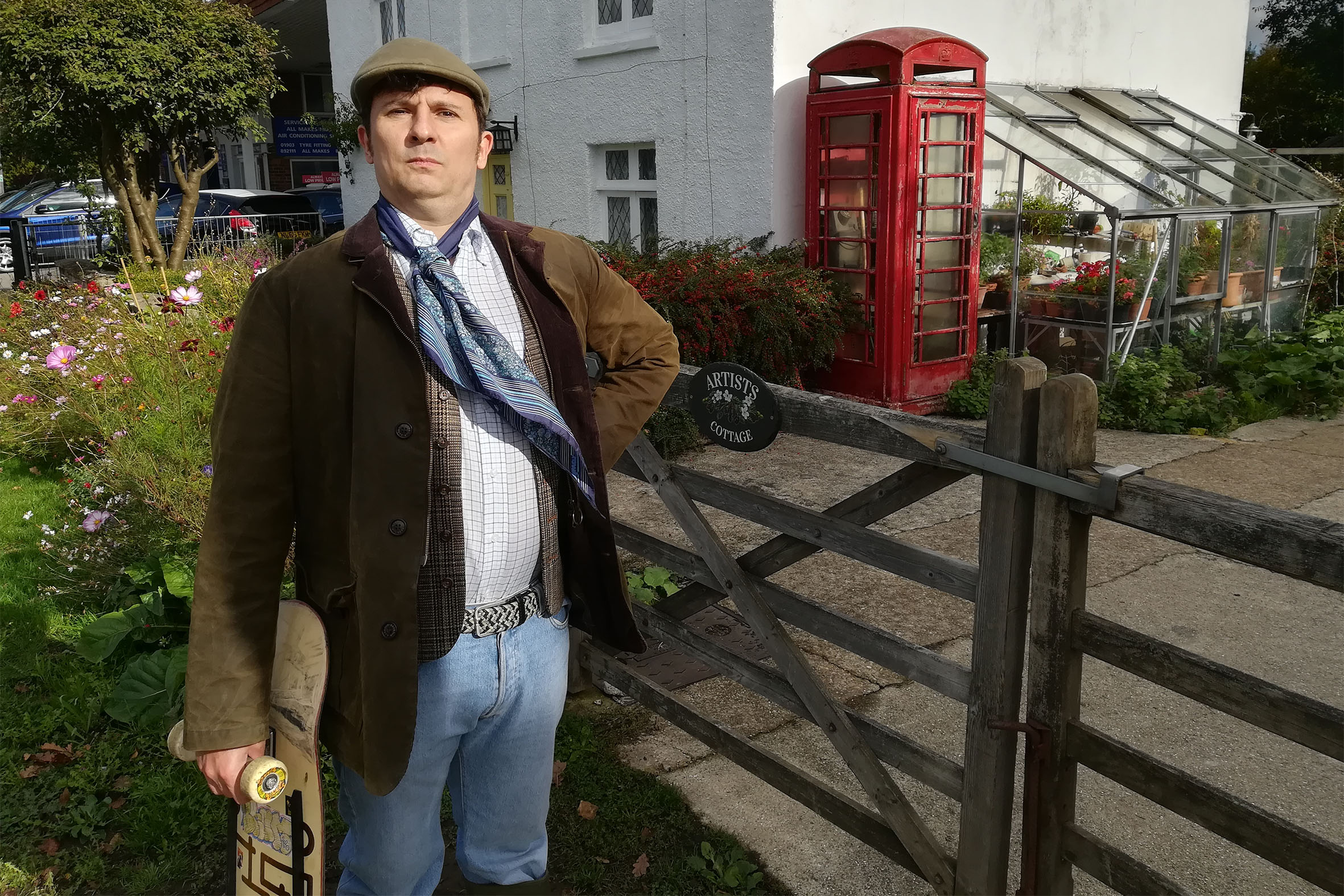 I caught a local gnome thief. The dangerous serial gnome thief had been at large and wreaking havoc for two years. Just by chance, I saw him take a gnome from Agatha’s front garden. I gave chase on my board, he thought that he could outrun me but he had no chance as I’m the fastest tic-tacker in the village. The upkeep of our gardens is a priority for maintaining the appearance of the village. The appearance is paramount since we want to win the Best Kept Village competition. 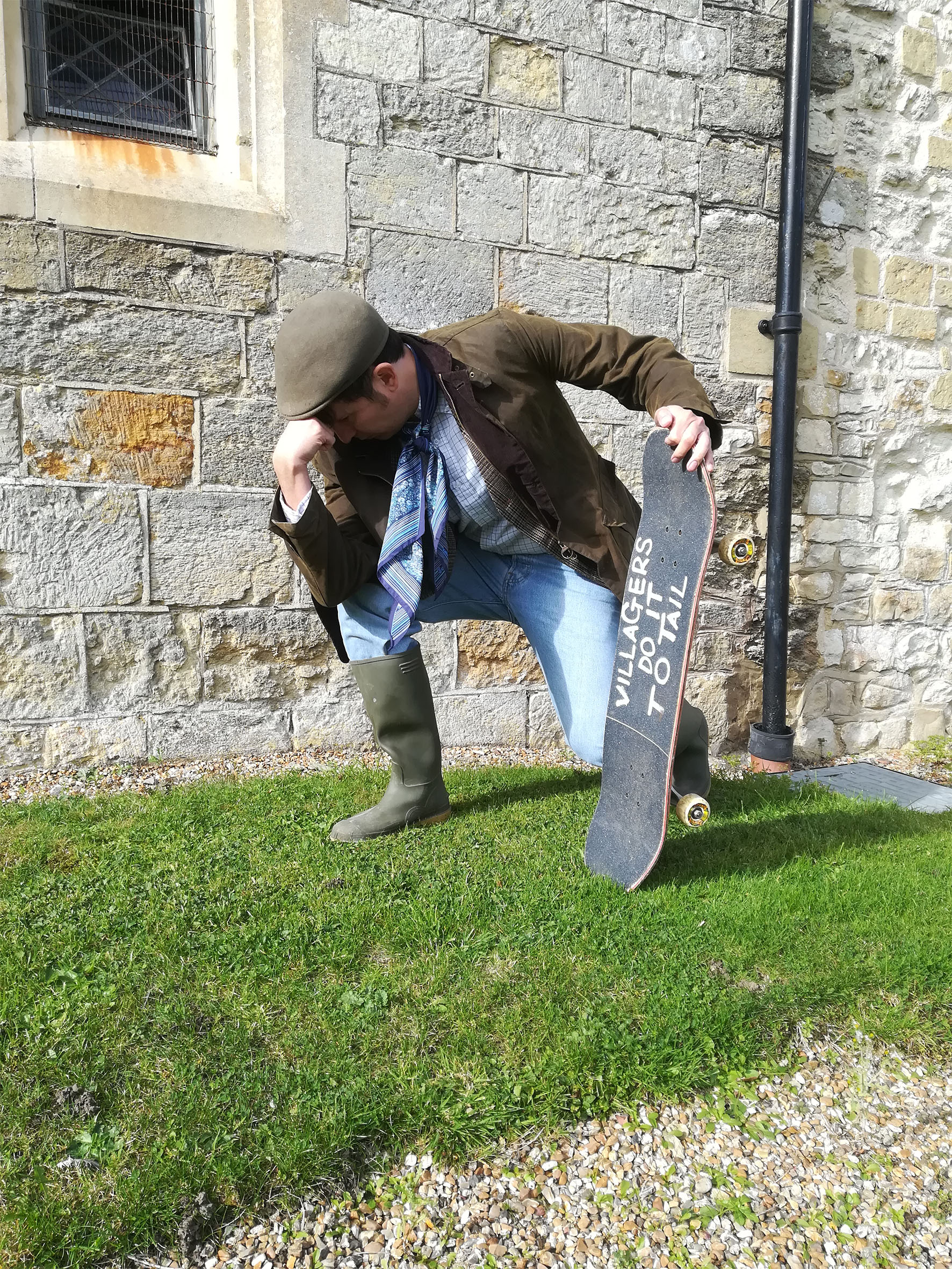 It’s been a while since Ashington won that, hasn’t it? 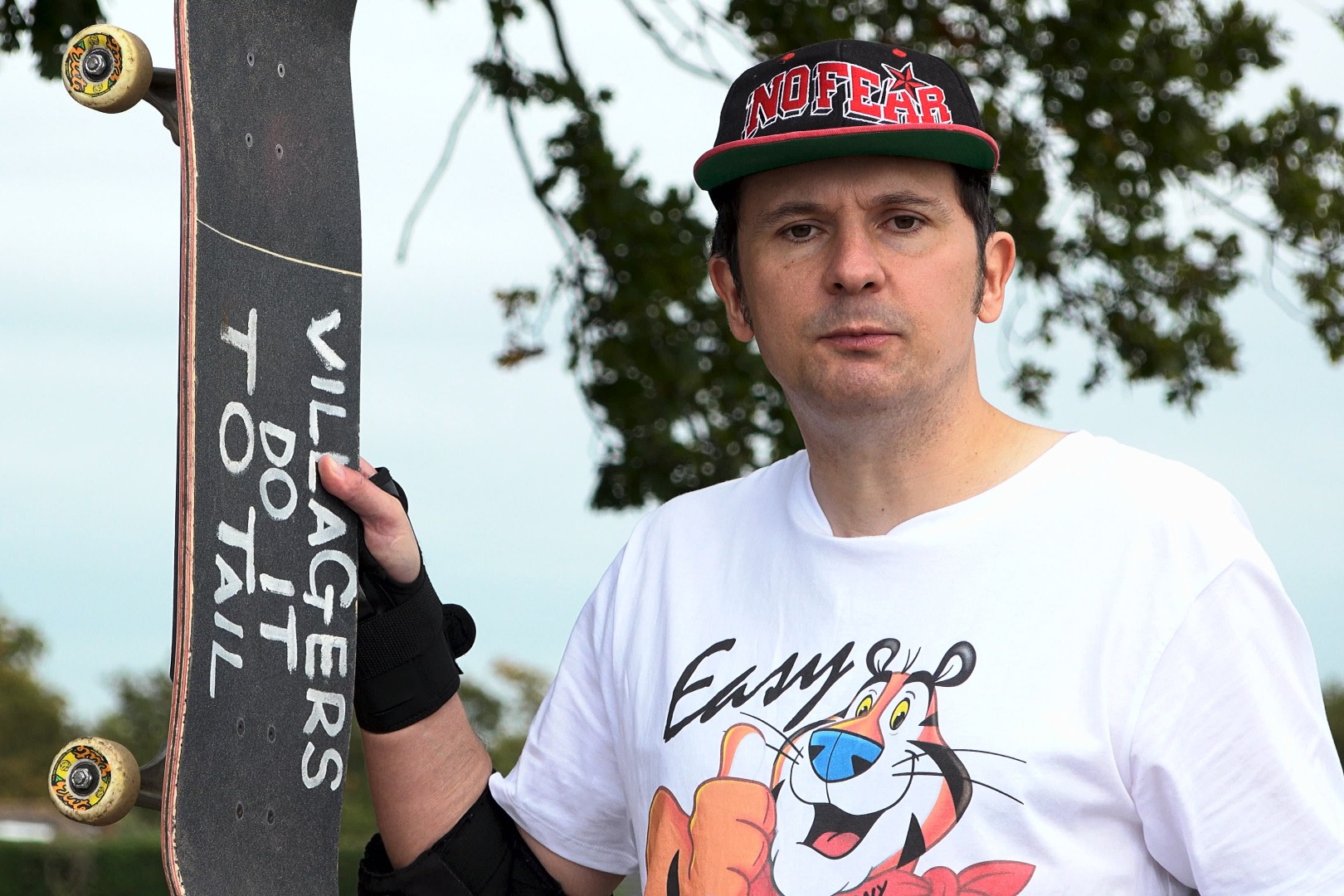 So, do you think that the village style of skateboarding is growing in popularity?

Certainly; it’s only a matter of time before we take over the whole industry. The city urban thing is played out and people are looking for something new. And you can tell that because Palace are making flat caps, Stussy are doing wax jackets, Magenta are running a tweed chino this year and Polar have ditched their little dealer bags for a beige heavy canvas satchel. That’s evidence it’s catching on.

I’ve noticed that there are a lot more tractors used on the graphics on skateboards now. That was unheard of ten years ago. I saw that Cody McEntire has ditched the toothpick and is now chewing on an ear of corn. Also, the Wurzels are playing at NASS this year. It’s as clear as the village pond that skateboarding is well and truly in its rural period. 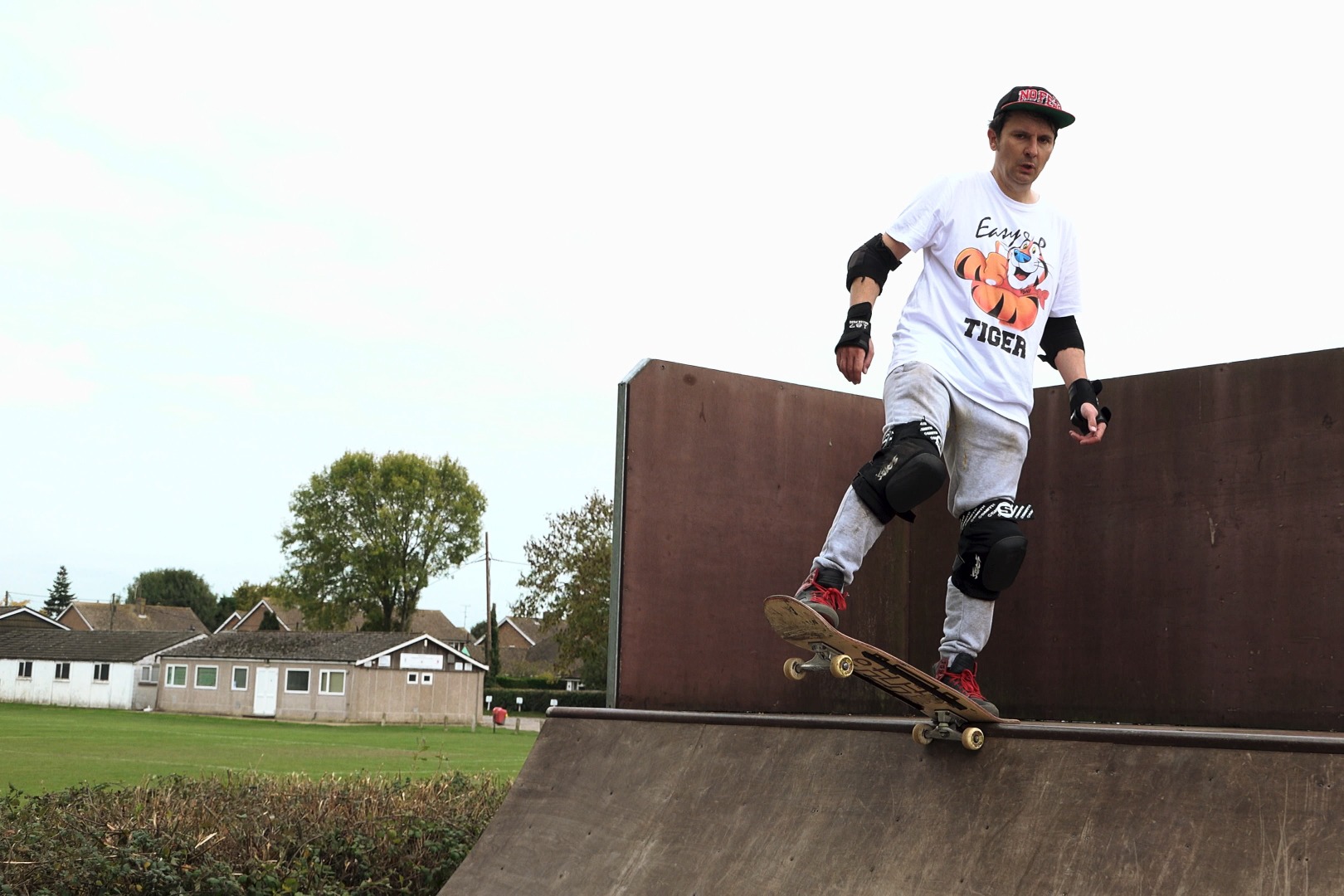 Tell us about this new village skater Diggory English that emerged from Kingston in recent years?

Diggs is a pretty good up and coming skateboarder. He breaks from traditional style and etiquette quite a bit but that will change as he matures, I’m sure. He’ll soon ditch the hoody for a nice Aran sweater. 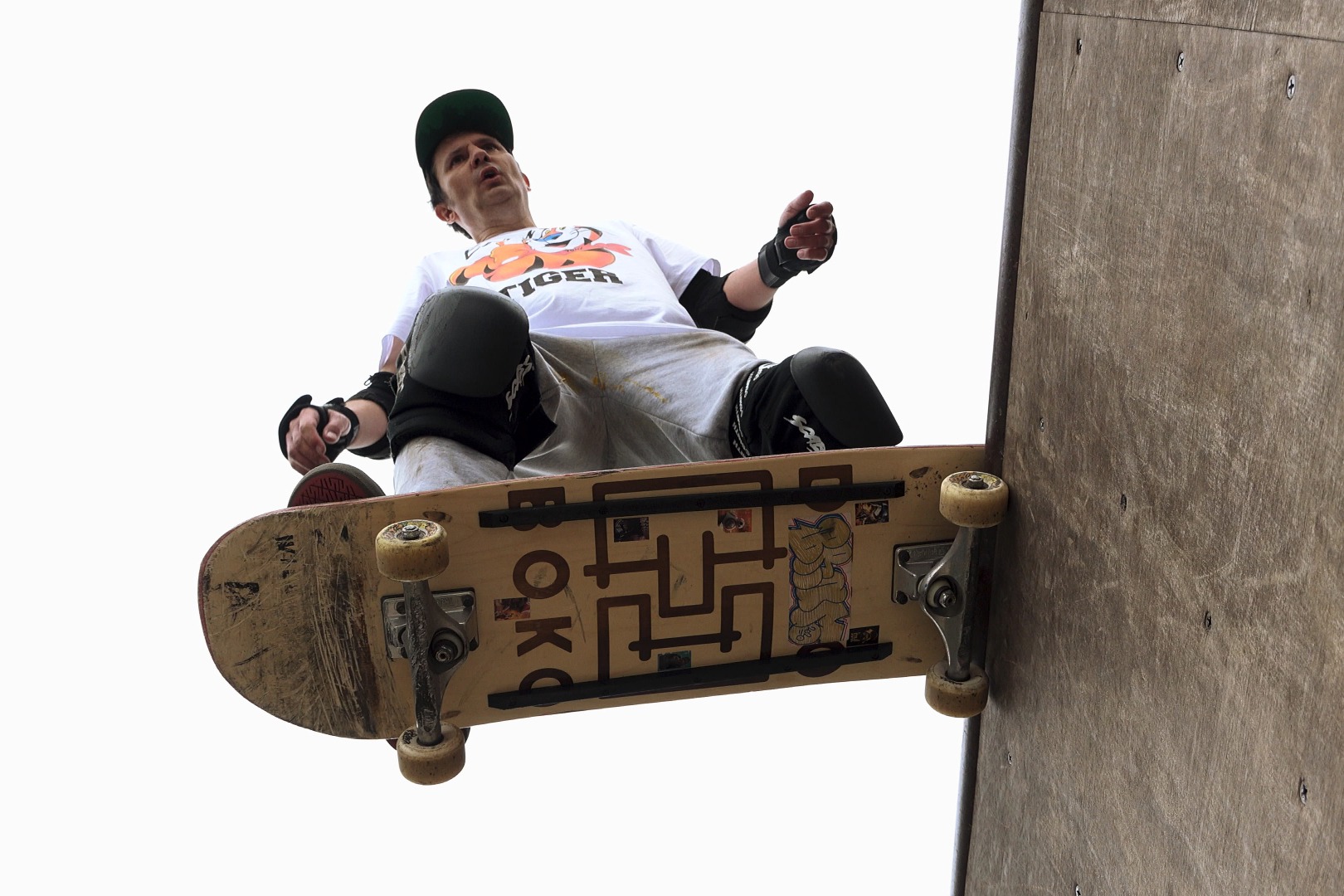 I hear he’s filmed a section that’s already better than the one you filmed for the Ashington scene video, “Pigswill” in 1997. 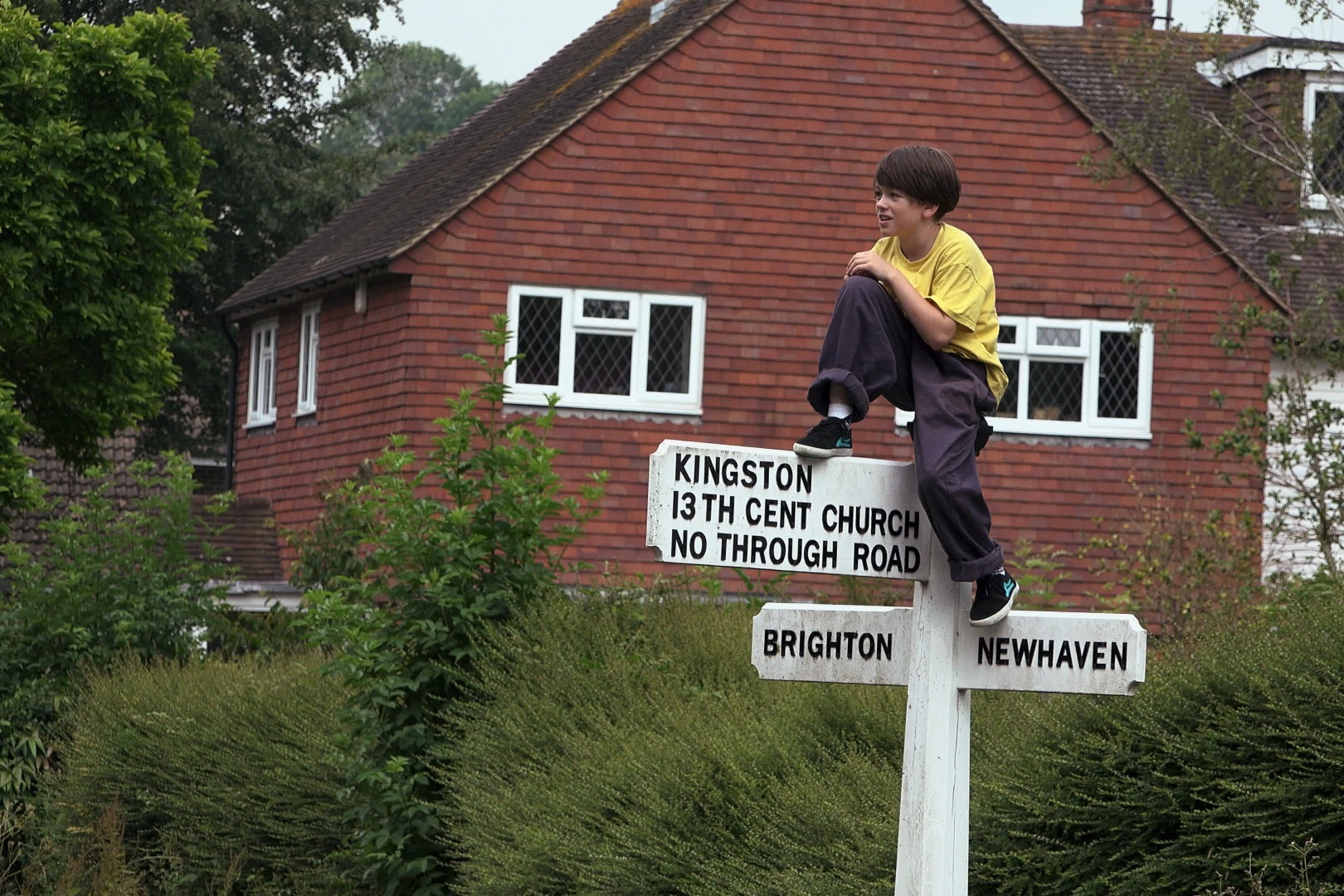 What’s your full name, how old are you and where did you grow up?

Diggs English, I have just turned 12 and I am from a village near Brighton.

Tell us about Kingston, where you live. Is it very village-y?

It is too village-y! There is a lollipop man called Mr Mills, a small pub, a little school, a church and a youth club that got closed because the neighbours were complaining too much!

I hear that Kingston won the best-kept village competition, beating Ashington, in 2012. How annoyed was Ploughman about that?

Ploughman was furious, he was so mad he threatened to break the village rules and do a blunt to fakie with no grab! It was unprecedented! 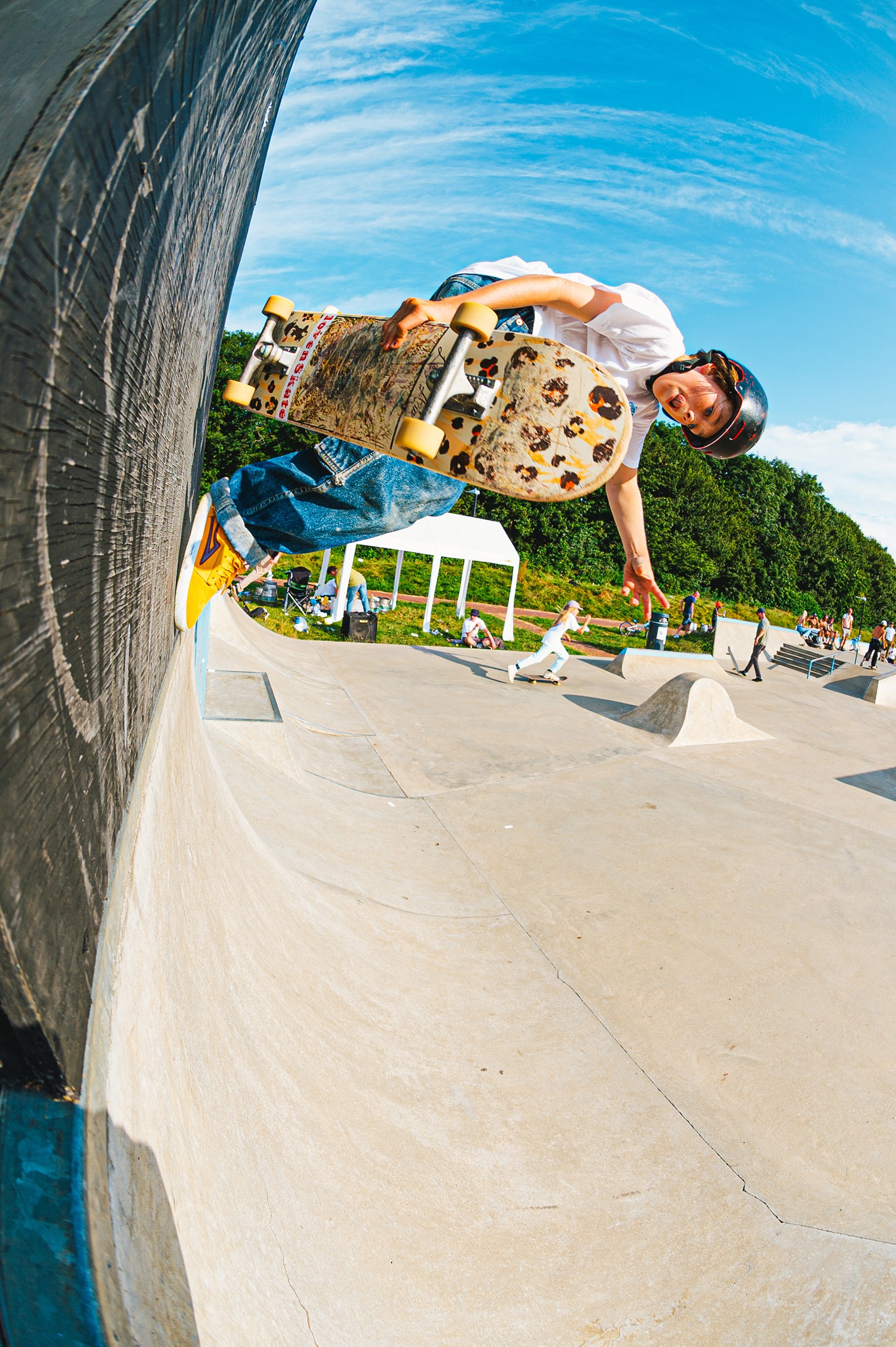 Does everyone in Kingston really know each other? What are the most village-y things about Kingston?

Everyone knows each other! The worst incident that has happened was probably when Kingston Council were getting furious when a bench had been mysteriously placed two inches away from where it was supposed to be!

How long have you been skating and how did you first get into it?

I first started skating when I was about 4 or 5 and I can’t exactly remember how I first got into it, to be honest. My Dad skates, so it was inevitable!

Where did you first learn to skate?

I think that, at first, I was just skating around the house. Then I started skating the old local, Skatehouse, which sadly closed. 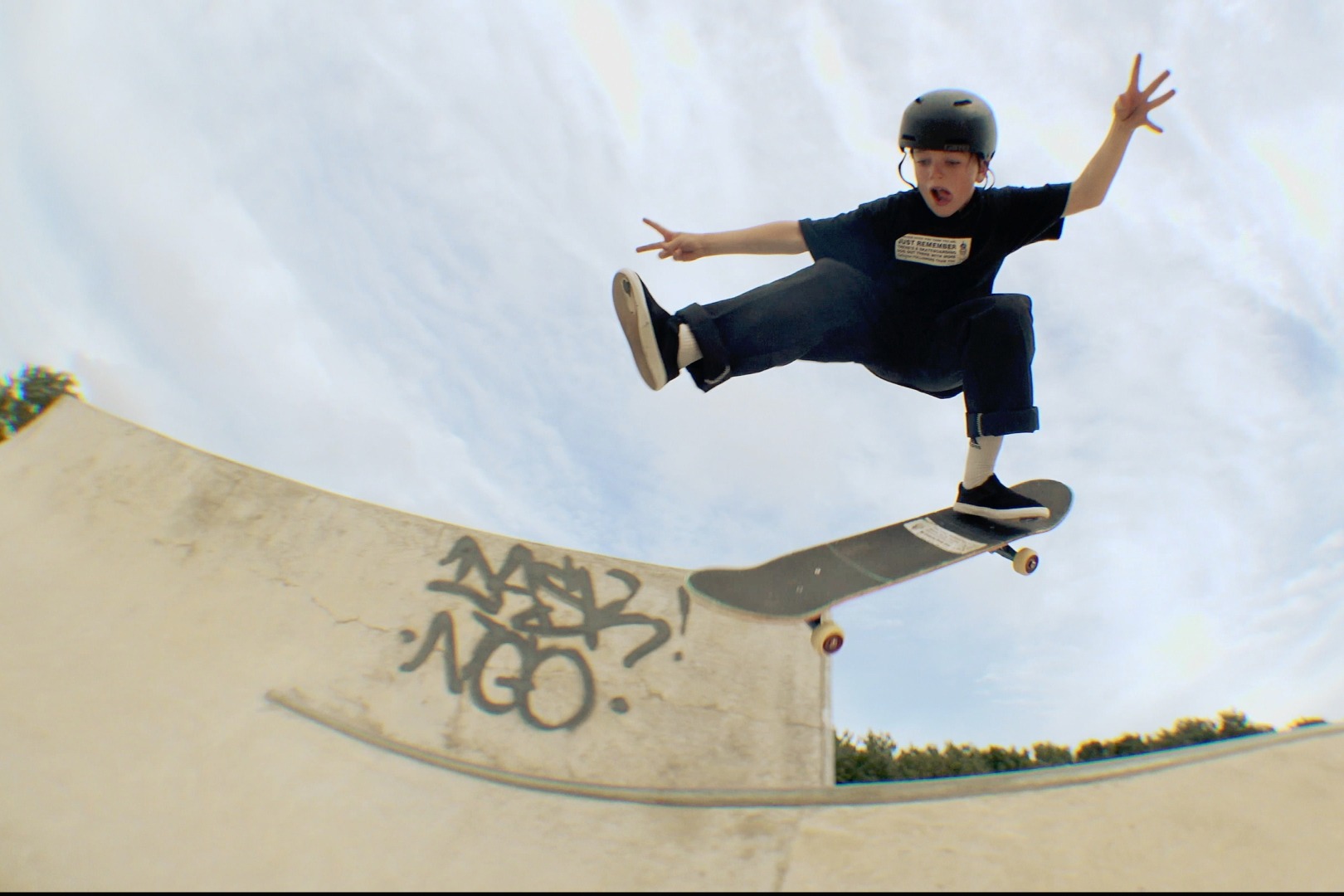 Do you have any good skate spots in the village?

Yes! We went to a bunch of places including Cornwall, Bristol and more. I’ve been skating with lots of incredible people, it’s been rad.

How often do you skate with Ploughman?  He claims that he’s good mates with you.

Last time I skated with him, he would not get off the miniramp as he was holding his nose stall for four hours! I had to leave. 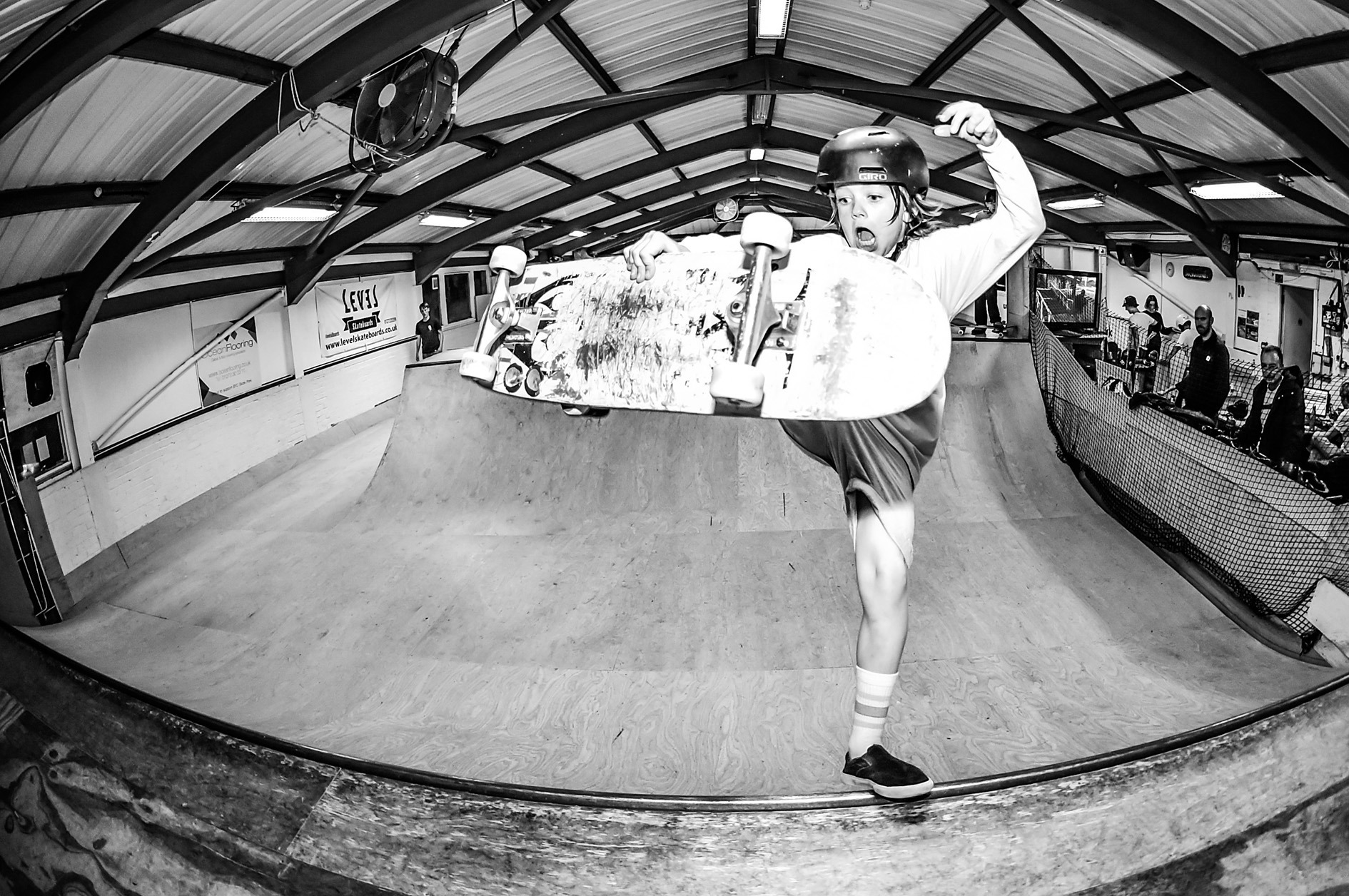 What are your favourite things to skate?

Are you the first village skater to be sponsored by Lovenskate? How did that happen and what’s it been like riding for them?

I think that Ewen was the first but I absolutely love riding for Lovenskate and I adore everything they are about!

Being slightly smaller than the other team riders, do you still ride the normal sized boards? Do you find them a bit more difficult to flip?

I’m riding a size 8 now and it’s perfect for me because the width is about the same size as my feet. 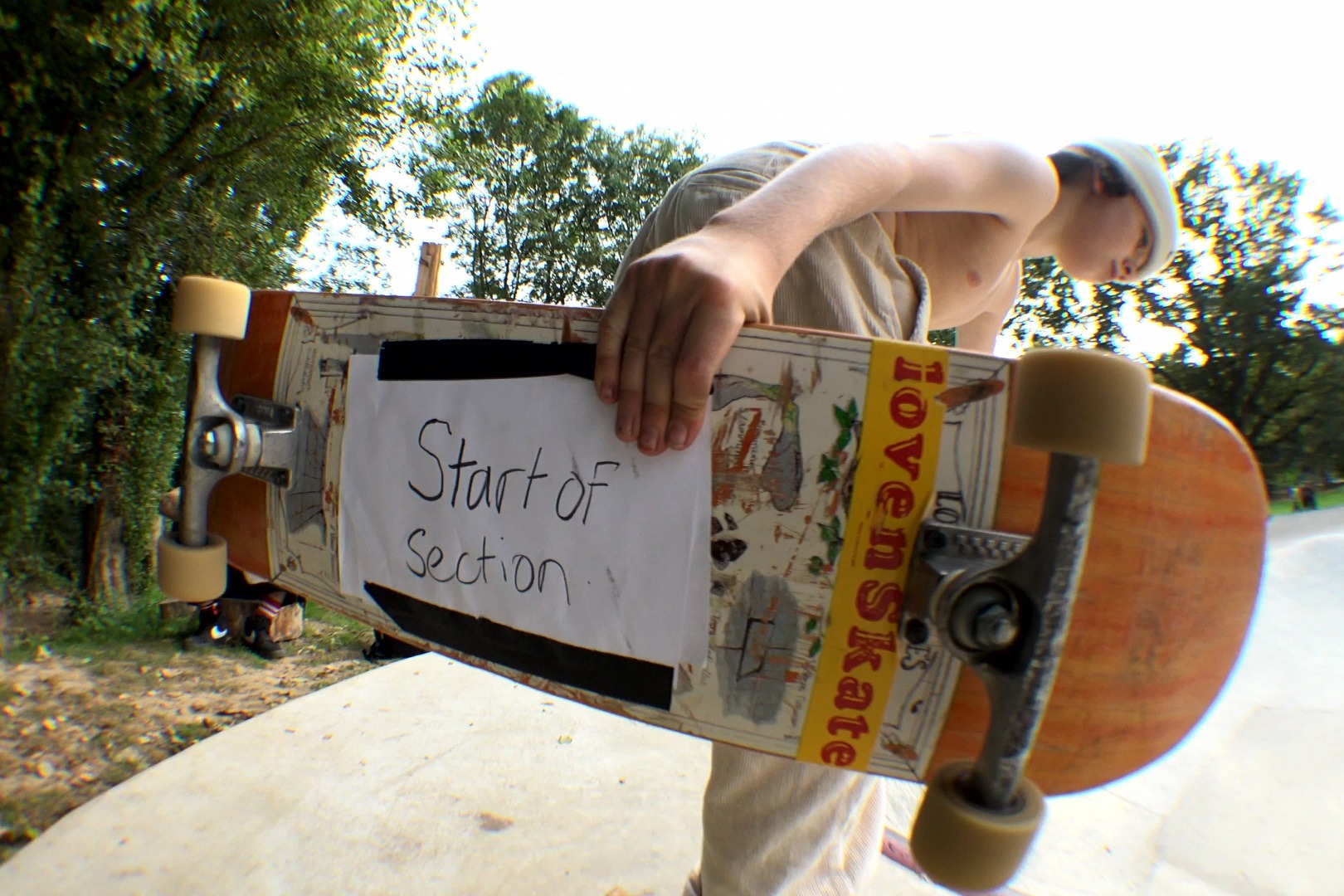 For the featured video, I think this is the first time that you have filmed a ‘section’. What did you enjoy most about doing it?

I loved it! It was super sick to hang with Andy and Lucy and everyone else involved!

What was the hardest trick to film and why?

I’m not actually sure to be honest, but there were definitely a couple of clips that were tricky to film!

What was the thing you were most stoked on doing for your section?

It would have to be the 540° at the end because it was the first one where I didn’t do it on a hip. 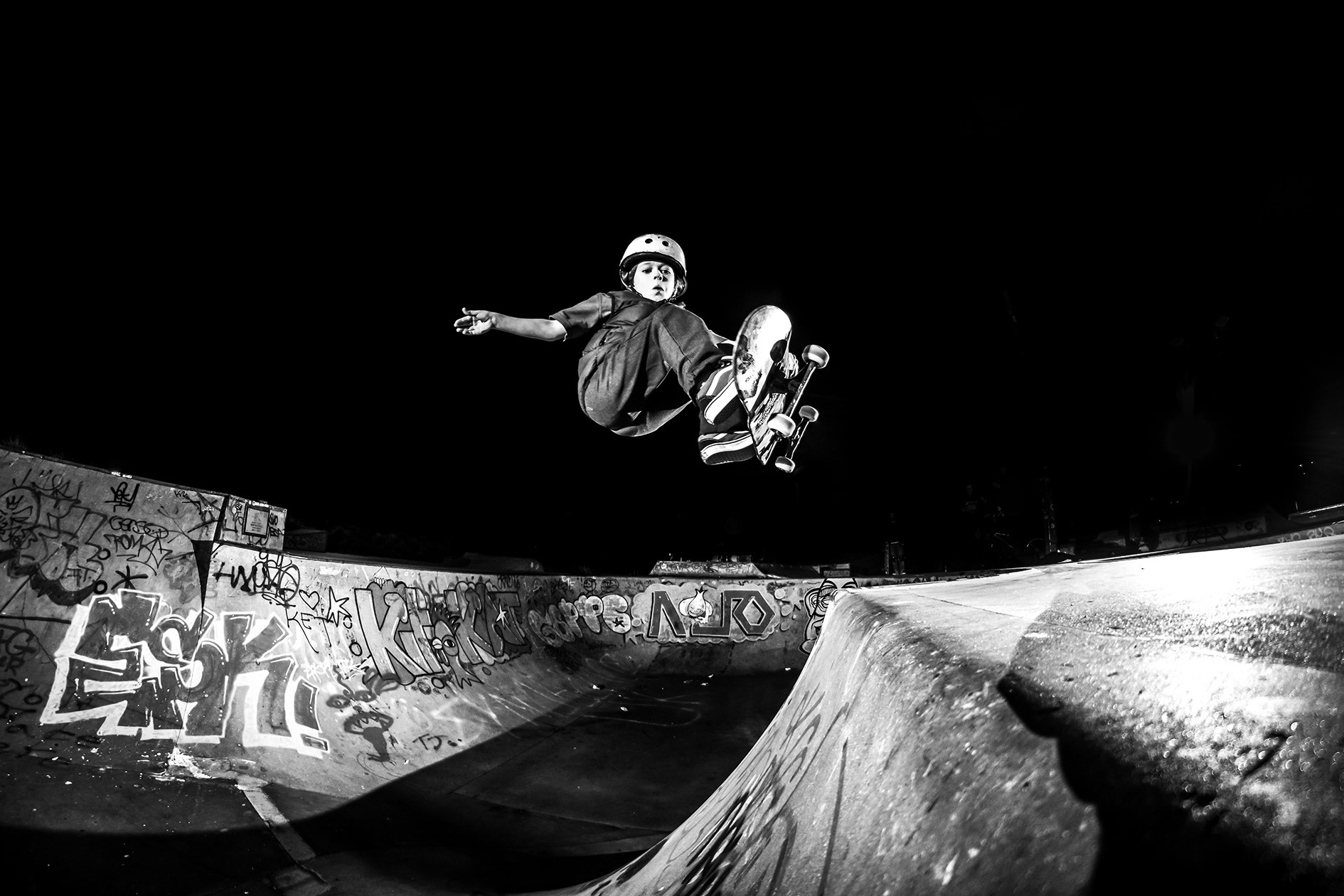 Is it true that you have a miniramp bed in your room?  How did that happen?

It is true. My Dad was building my room with Stevie Thompson and Stevie asked whether my Dad thought he could fit a miniramp in my room, that’s pretty much how it happened!

Over the years, which skaters have influenced you the most? Ploughman says that you will probably say it’s him.

What do you hope to do with your skating in the future? Do you think you will stay in the village or go on more adventures?

Hopefully I will just get to travel and have some fun with my wooden toy.

Lucy Adams – A Metre Of Air

To celebrate International Women's Day we have released video documentary by Andy Evans with one of the raddest of all: Lucy Adams. We interviewed Lucy and Andy on the making of this brilliant piece.

Check our re-cap from the Pier Pressure Jam which took place in Folkestone over the weekend! Featuring the likes of Jake Snelling, Ben Broyd, Amanda Perez, Salar Kooshki, Diggs English and more!