We’re proud to present ‘DEPOURVU’ a new video in collaboration with Quotamine and Converse CONS featuring potent pair: Lucas Languasco and Adrien Chabiron. We’re big fans of these two, you’ll see why. To top it off this shared part was filmed excellently by Kemisse Zouikri and Jimmy Cholley with music courtesy of Francis Mallari, Adrien Vernet and Alex Battez. Alongside this video release we have published an online interview with Adrien Chabiron conducted by Clement Chouleur who also shot all of the photos for this interview. Get involved below! 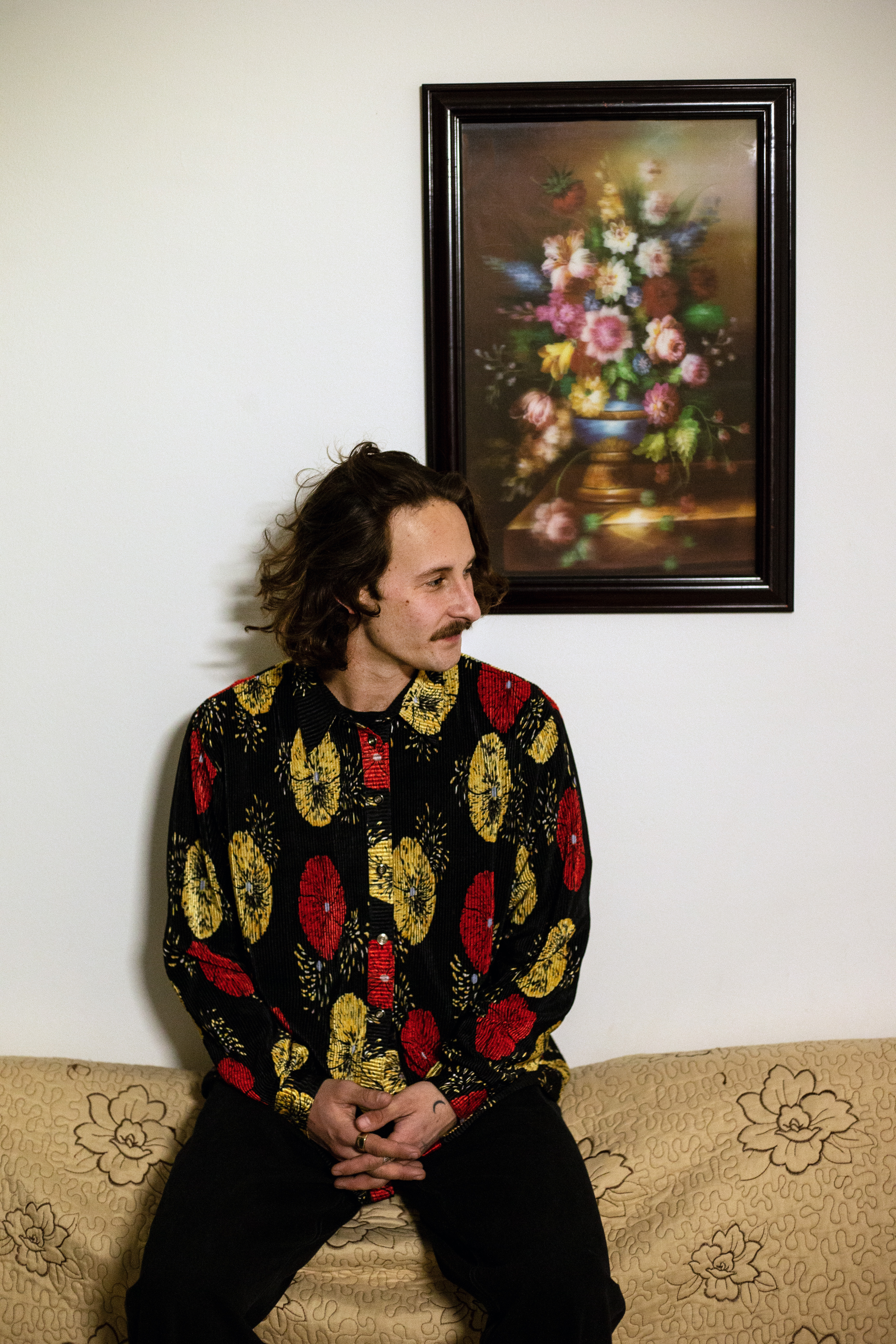 Coming from the French Riviera and loving it more than anything, Adrien is such a character,a true epicurean who knows how to make you smile even when he’s grumpy. Just like thesun on Croisette Beach in Cannes, he will always brighten your day. Exiled in Paris, that’swhere we met and became friends. I instantly became a fan of his style. We’ve been onmany adventures together with the Trois CCD crew and for the past few months I’ve been byhis side shooting for this Converse part. We sat down and I asked him a couple of questionsso you can get to know him a little better. 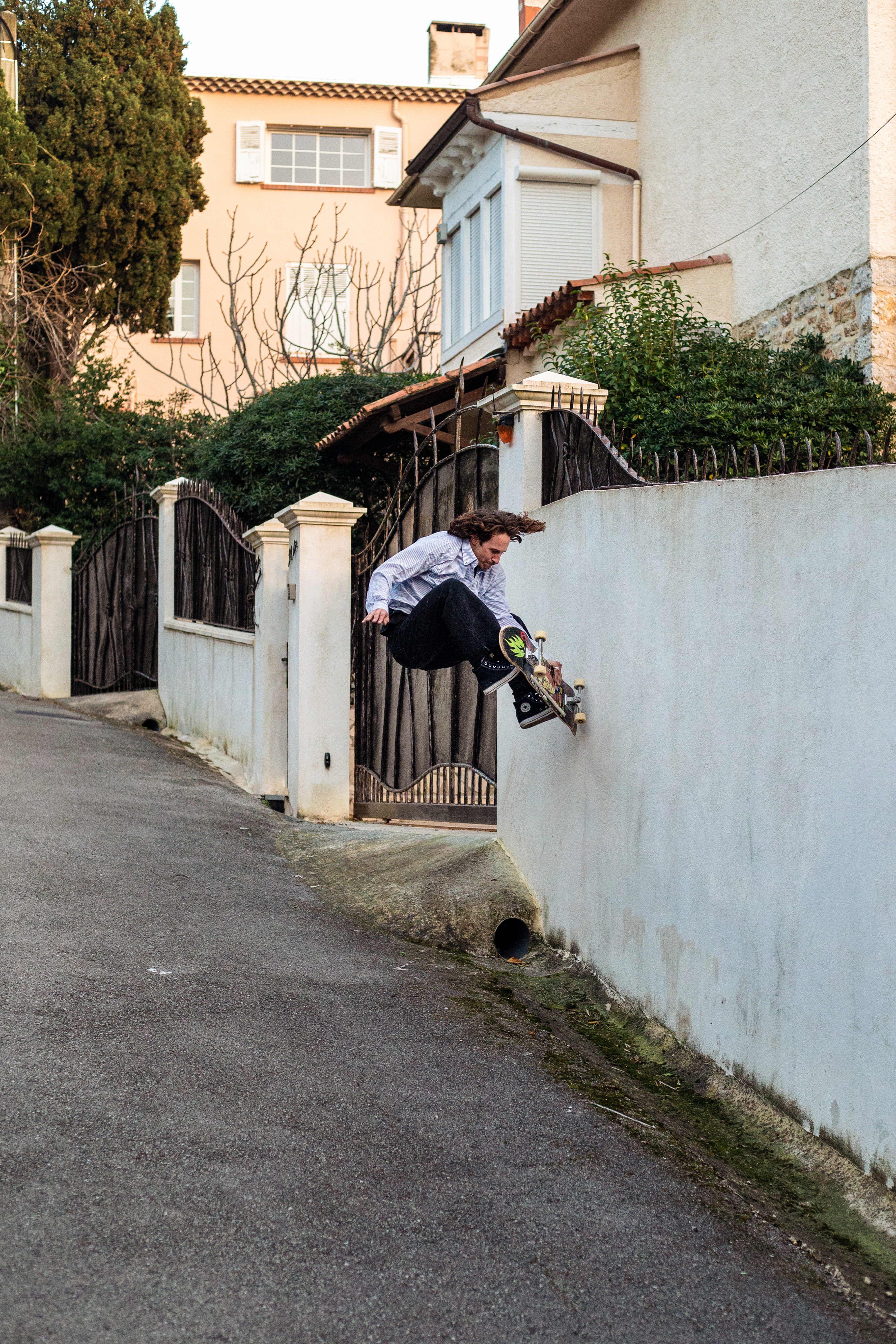 How are you doing?

I’m done working for a couple of weeks so I’m doing pretty good, it’s finally sunny here in Paris and even though it’s a shitty city we’re going to be able to go skate soon so I’m stoked!

Are you staying for a bit?

Yes I’m staying until the beginning of summer, probably a month, then I’ll do round trips between here and the South of France, hopefully I’ll be able to travel a bit further. Work in Paris and go on skate trips anywhere else, that’s the plan.

That’s why you came to the capital in the first place.

Yes, I’m working as a stage manager in the fashion industry and it’s easier to work in this domain here but I realise that it’s not a city for me. I already knew it but it’s good to see it for yourself and at least my job allows me to have a lot of spare time to skate. By the way, I didn’t work that much these last few months haha. 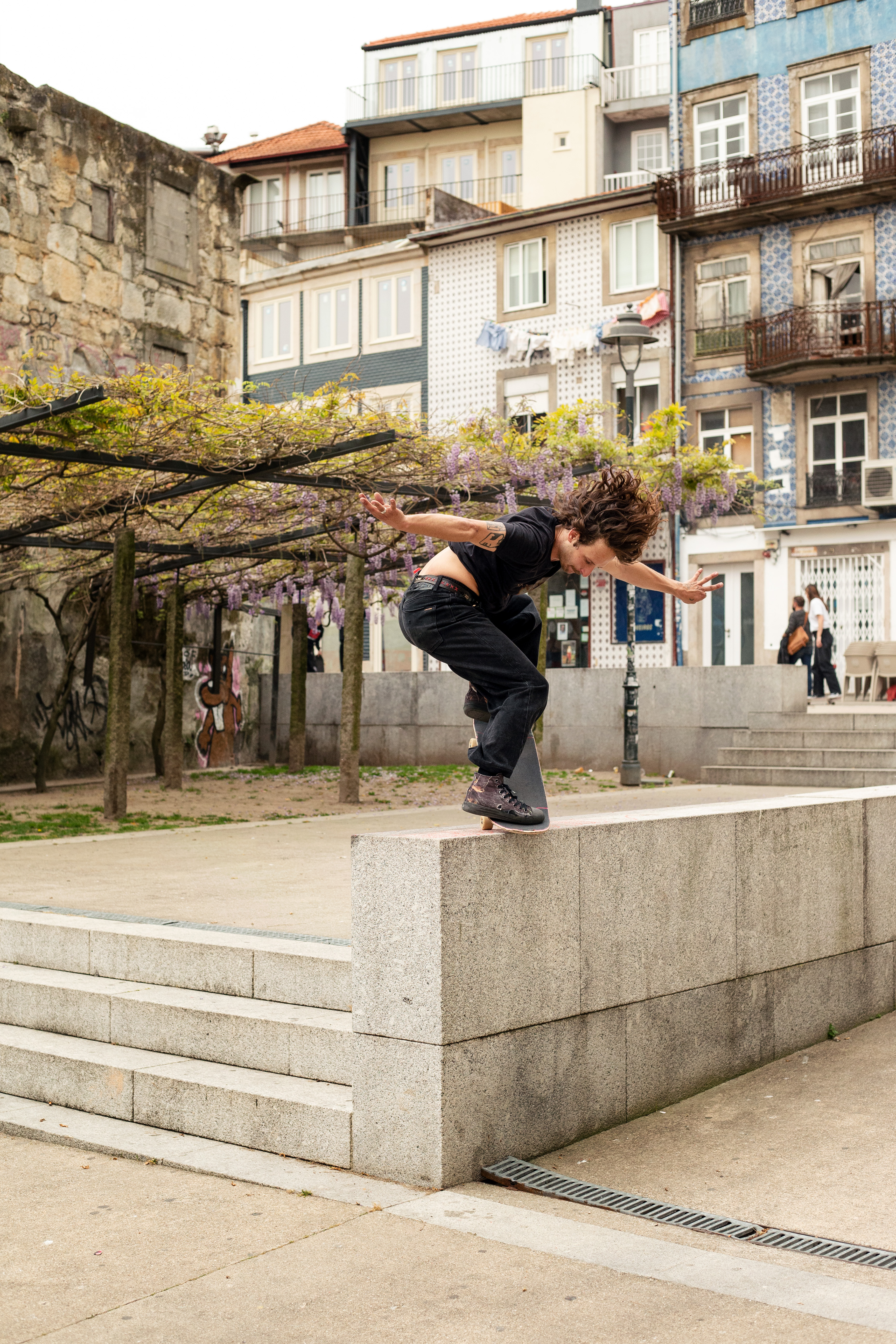 A lot of skating then.

Yes, a lot and it was great. We went on a bunch of skate trips with the Trois CCD crew and visited countries I’ve never been to like Spain and Portugal. But the most special to me was when we went to my hometown, Cannes for those who don’t know. It’s a little seaside town well known for it’s movie festival. I’d say it’s a window for luxury and vice but it’s still pretty charming and full of hills. When the crew was there we went to Marseille, Toulon, Cannes and Nice, it was just great to escape the Parisian lockdown. I was so happy to show you guys around my region because there’s not a lot of exposure in the small cities. In Marseille it’s way different and there’s a lot of keen interest now which is great but I hope it’ll radiate to all the smaller scenes.

Even though I knew the region I was so happy to discover it with you, the best guide for sure!

Thanks, I was happy to show you guys around my lovely region. It was easy because I know a bunch of spots in the hills, they are my favourites! I always prefer to take the smaller roads in the hills rather than in the city and that’s how I find them, by luck. They’re not always the best spots but in the city centre you get kicked out quickly, so it’s a bonus to have them and at least you can skate in peace. It’s funny because usually they’re right in front of billionaires’ properties, but I guess they’re not there often so we can enjoy them freely. I get bored pretty quickly with the classic stuff you can find in the centre so a typical, crusty and downhill is my thing… it’s a whole other mood.

In a way this constraint forged your style; hills and walls.

For the hills, yes, absolutely because I’ve always done that. Straight out of my front door there’s one that I’d bomb everyday and that’s how I learned to go fast. I remember when I was 10 or 12, the older guys didn’t want me to go with them to bomb the big ones. They used to party until midnight on top of the hill and then race to the bottom. They were saying that it was too dangerous for me and my mother was too scared, but when I turned 16 the first thing I did was to go to the top of the highest one (California Road) to bomb it and the love story started. As for the walls, I don’t really know where it comes from even though I like them a lot too. 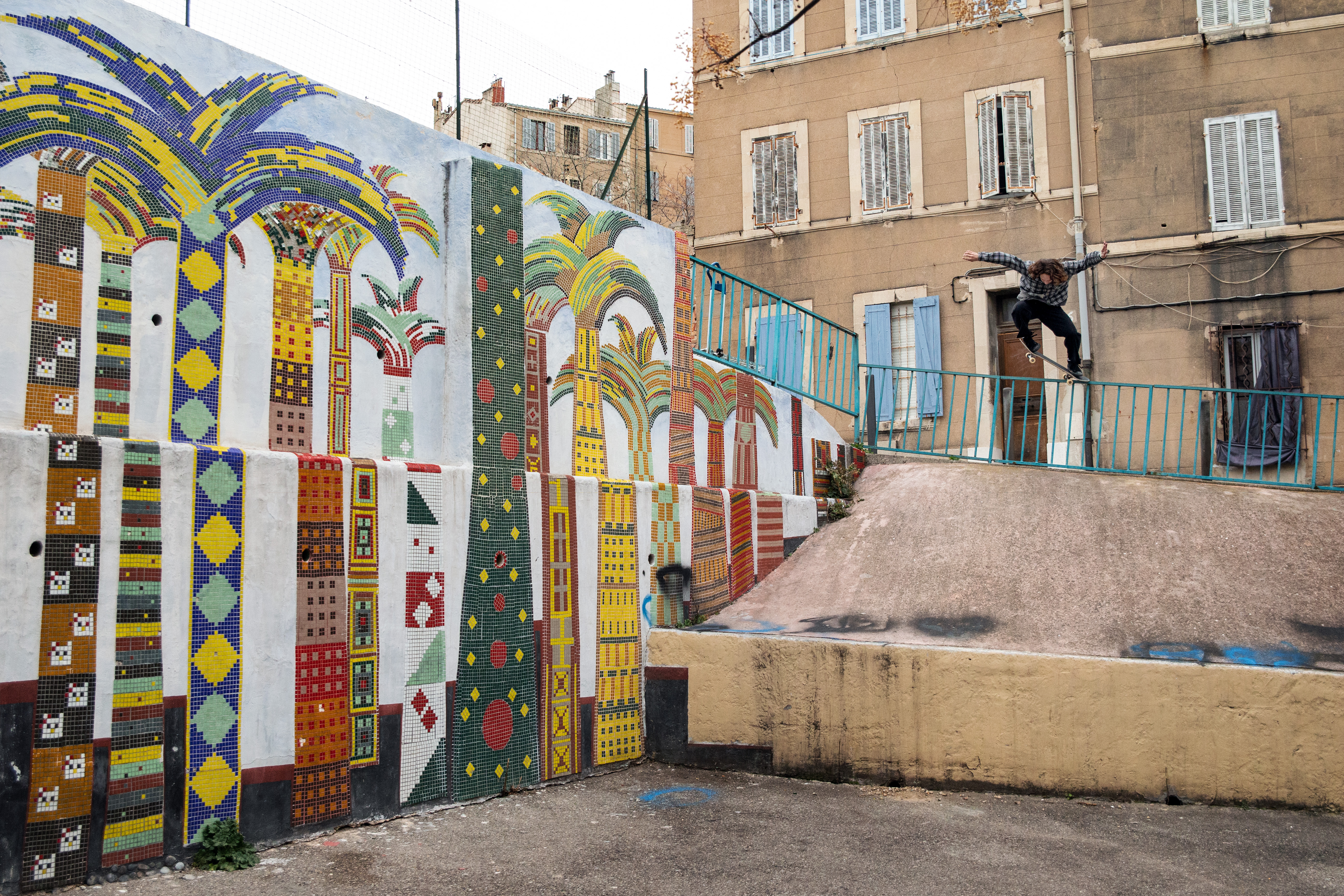 Wouldn’t it come from the little inclined wall at the DIY park by the sea?

Oh fuck, yes you’re right. It’s called La Roseraie and it’s by the port of Cannes. It’s kind of a skatepark now because skaters brought features they built, rails or quarter pipes, but it’s really a DIY. As I told you before, you get kicked out of spots really quickly in the centre so it’s hard to skate in the city and this is pretty much the only place where they let us be. Back in the day it was actually a street spot with granite benches that wouldn’t grind and the little inclined wall on the side. Only the wall remained and it’s my favorite one ever. I learned most of my tricks on it but it’s really hard to skate, I still battle with it and it always wins… bastard. Anyway, wallrides give you the best feeling and it’s so satisfying. I’d say that it’s both violent and elegant, I love it.

When you left the South for Paris you weren’t alone, Lucas Languasco who shares this part with you was there too. How did you two meet?

True, but he came a bit earlier. The scene down South is pretty small so we were already skating together. When I first started, I had a bunch of friends but they all quit so I ended up alone in between two generations. Naturally I ended up skating with the older guys and I eventually made new friends that were my age in the cities nearby. I used to go to Marseille, Mandelieu, Nice and even further when there were cars available. That’s how I made friends all across the French Riviera. At some point you end up knowing everyone and I think my generation started the desire to connect the scenes, back in the days everyone would stick to their town. At some point I was going to Nice a lot (where Lucas is from) and even though I didn’t like the city there was a lot of motivation there and that’s how I became friends with Lucas. I was really stoked to find him in Paris so we could keep on skating together.

Then you both joined the Trois CCD crew.

The crew was already existing for a while when we met Jimmy (Cholley), we went on a couple of missions together and quickly became friends with the whole crew so we ended up joining them pretty naturally. Then we started our own little crew called Smoking Club.

It feels like there’s a bunch of southerners in the Smoking Club.

Yes, there’s a majority of southerners, but we’ve got people from everywhere. Just like Trois CCD we like diversity and being together, but we just like weed a lot more haha. 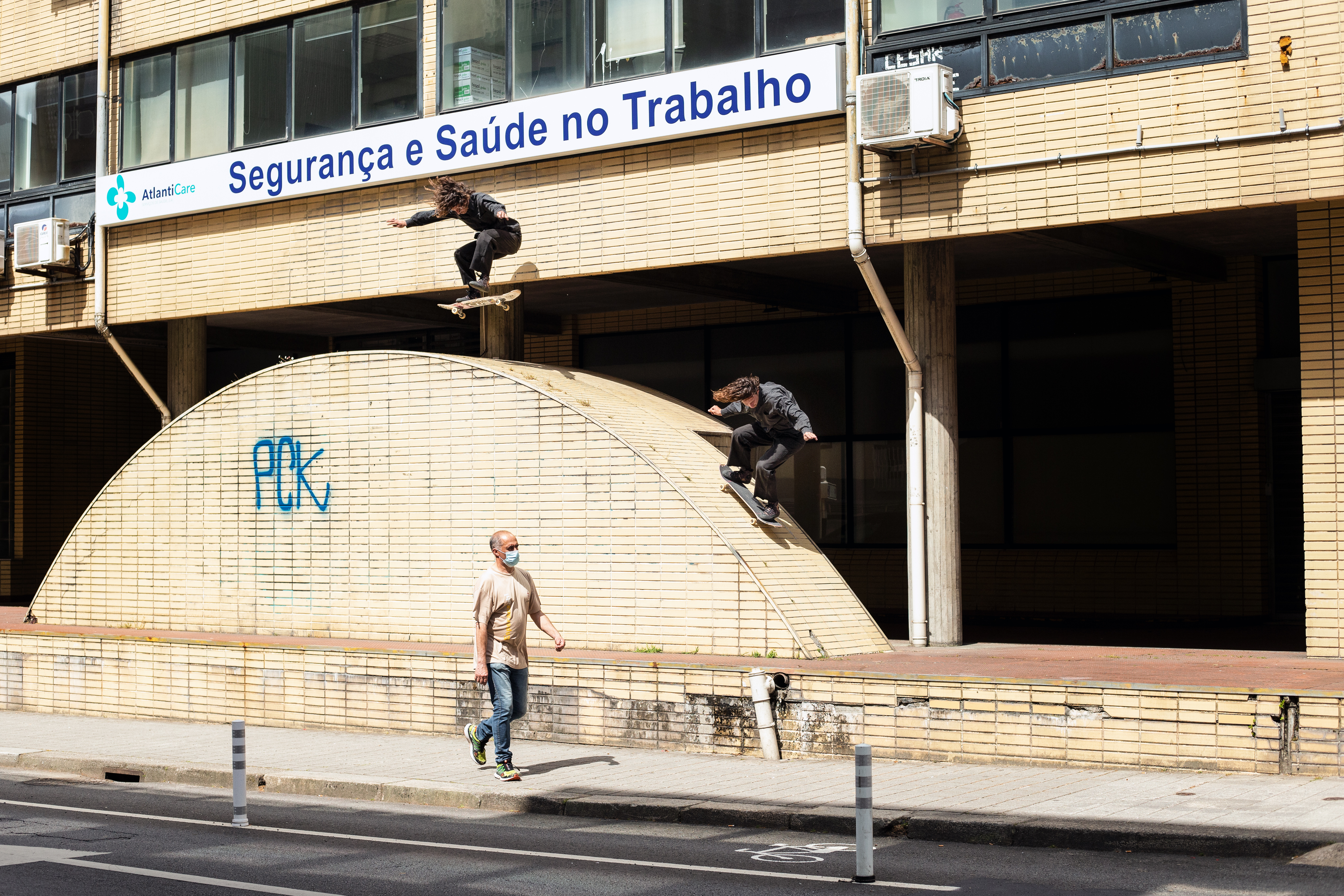 Did this idea of a part come about during one of those foggy nights with the Club?

Haha I don’t really know what happened. When I moved to Paris I didn’t have many sponsors and then all of sudden Luidgi Gaydu hooked me up with shoes, boards and trucks (Converse CONS, Quota and Ace), but most of all he gave me a lot of motivation. It was a few months ago and that’s when I started to want to be anywhere but Paris. I just wanted to skate so I left my job for a bit and went on all those trips with Trois CCD, it was good timing. Luidgi heard about our trips and offered Lucas and I the opportunity to film a part for Converse. At first it was a little bit blurry because we had never been involved in a serious project with a big brand, but since we were already in that dynamic of travelling and filming it came naturally. I wanted to stack even more footage but I’m glad we’re done with the project and that it’s going to Vague.

Now that it’s over you’ll be able to focus on your part for the Trois CCD full length.

Yes, we’ve got this big project coming up with Jimmy but I don’t know when we’ll be able to release it. It was due for the end of summer but you know how it is with deadlines, I guess you guys will have to be patient. One thing is sure though, I’ll have to film a lot more because almost everything we stacked went into this part. Since we got back from the last trip I worked a lot to afford the next ones, but I feel now is time to get back to the filming missions.

So, this part is kind of an appetizer before the main course?

Haha yes, bon appétit and let’s wait for the main course! I just hope the motivation to skate will stay there. When it’s there you must not let it go, whether it’s in you or in your friends you must always feed it even when it’s not always easy. It’s essential to keep the flame lit because it’s the only way to get things done.

Like when you chase people on the run up with the boombox blasting.

Exactly, I love to do that! Shouting, hugging, passing a doobie… anything that’s good to hype someone, you’ve got to do it. It’s so important when you’re a crew, think collective even when you’re not skating. We should all shout more at the spots!