Welcome Skate Store’s King Vic had an interview in Issue 16 of the mag. Since then he has landed himself on The National Skateboard Co. expect to see more from this fella very soon! While you anticipate more from Victor you can read his interview in full below. Interview conducted by that man Fraser Doughty.

Every scene has one and all skateparks see it, that special skateboarder who is hungry and talented. But this one was a little different for me as Victor was the first skateboarder to make me realise I was getting older and the scene was moving on. I’ve been watching his development from small human to powerful man over the past eleven years and his skateboarding is still exponentially getting better at an alarming rate. His presence, grace and decorum is what led to his coronation at Hyde Park and hopefully more skateboarders will come through with the drive, humbleness and care that King Vic has brought to our lives here in Leeds. Long may he reign! 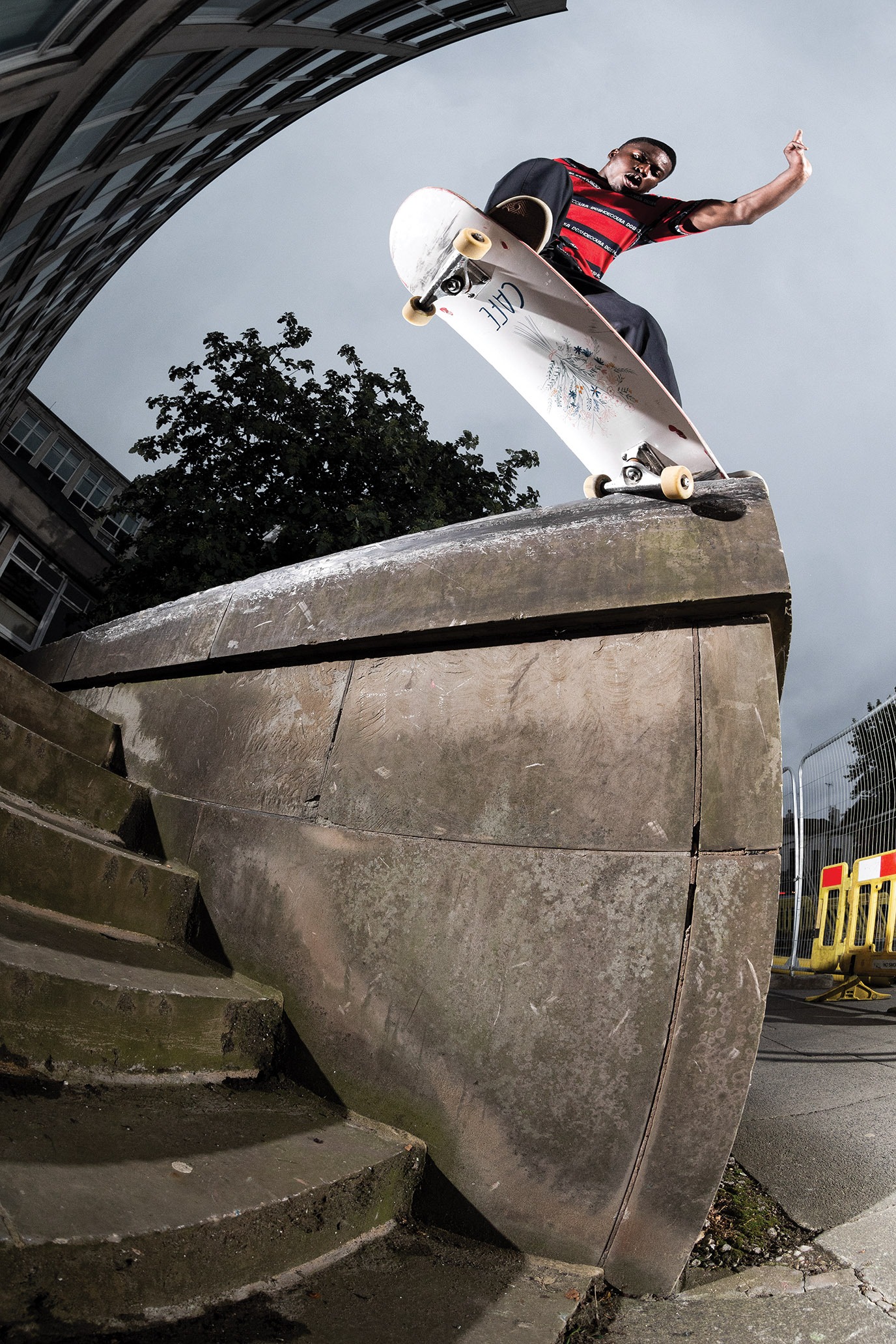 If you ask the older generation there’s a word that comes up ‘determined’ but you also clearly lacked any requisite skill too.

I wanted to be good innit haha, I just had to try everything and hope something would stick.

When did you get recognised and placed into the monarchy of the Leeds scene?

There was just a time where I had spiked in growth quite literally. I was a small kid then just I turned up like this haha. I got more confident and everyone kept on joking about it. The older guys kept on saying it, ‘King Vic.’ I guess the crown was put on my head haha. That’s a difficult nickname to keep up with.

I reckon you’re probably one of the last ‘Leeds’ skaters, in definition of your generation; we’re a transfer season city.

Yeah, you get that here, once a year you get new skaters and the homies leave, but I’ve got a good job as an engineer here and everyone gets along.

I’m trying to say you’re the best skater to come through as a local in Leeds for a long-time. How did you start skateboarding?

Nah, don’t say that. I got a possibly stolen board from my friend Tanaka and kept at it, I remember it having huge wheels and no grip tape. I learnt to ollie on that board too. I went to Welcome when it was below Crash Records with this ‘first board’ and Leon (Walton) gave me a copy of the Palace DVD, that’s what kept me going. I saw someone who I could relate to, who was Lucien Clarke, skating which I wanted to do. I’d never seen a skater in the UK like that. I was just watching American stuff. 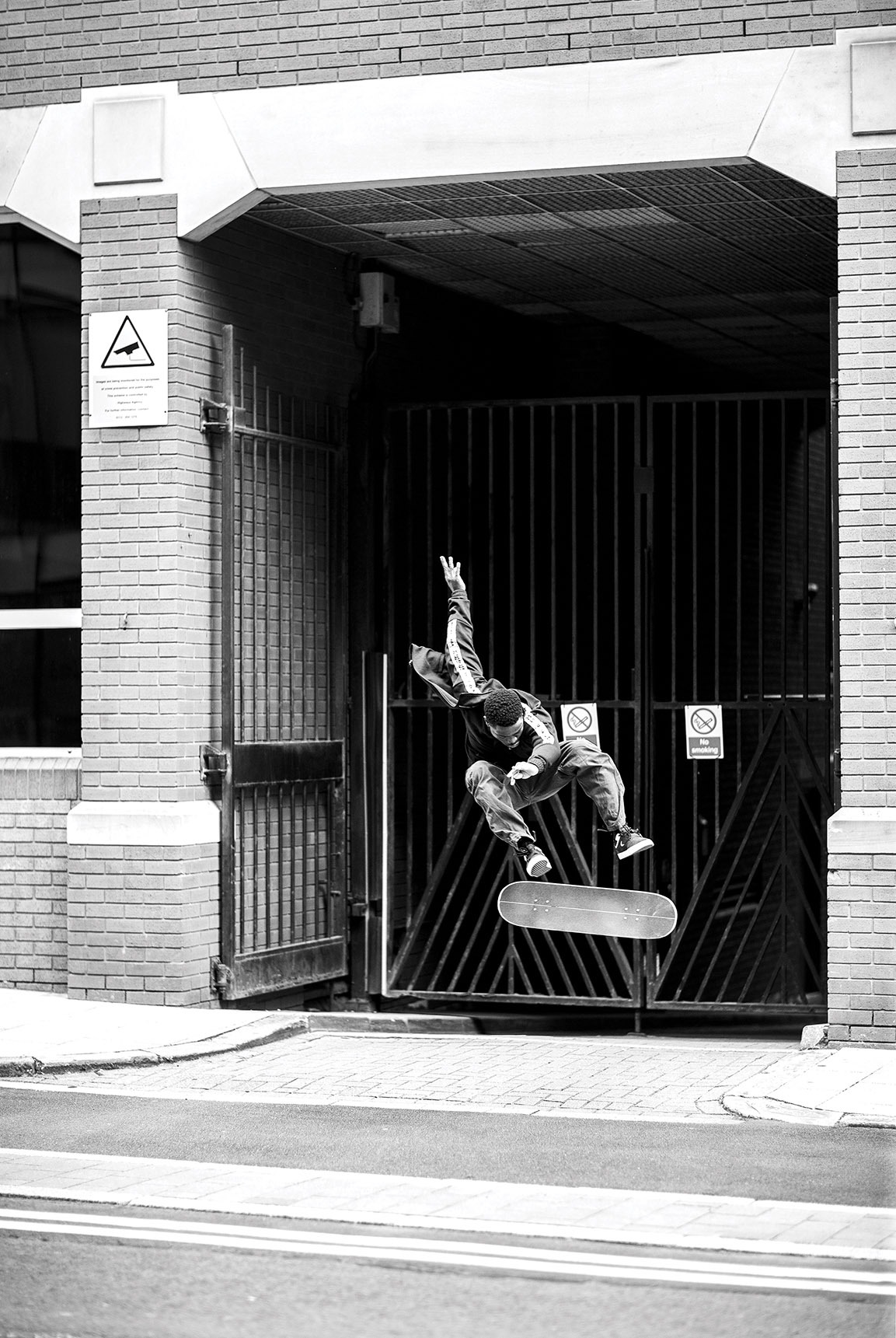 No it was Girl ‘Yeah Right’, I was a BIG Paul Rodriguez fan for sure haha that was on YouTube innit. I was a kid and that guy was killing it, he was young in that too. That’s the reason I tried to learn switch early on, I didn’t know what switch was but I saw that P-Rod skated both ways somehow. I’m still a P-Rod fan though, I’m currently rinsing his ‘In Bloom‘ section.

What about Street Dreams?

Yeah, that was dope we all used to watch it to get hyped haha. We would honestly watch it as if it was a skate video damn haha.

‘We’ as in the UltraBoiz, what was that all about?

That’s a generational thing innit, you lot had RWTB and whatever, that was our thing. There were a lot of us too. You know those edits with trap music, everyone in that crew is killing it now. They’re the reason I’m getting to do this. Jake Mitchell, Junior, Harry, Dan, Oscar, Matt, Jake, Zahid and Trayvon. We had a heavy crew at that time.

Have you got the NAC?

Not too far from it haha. 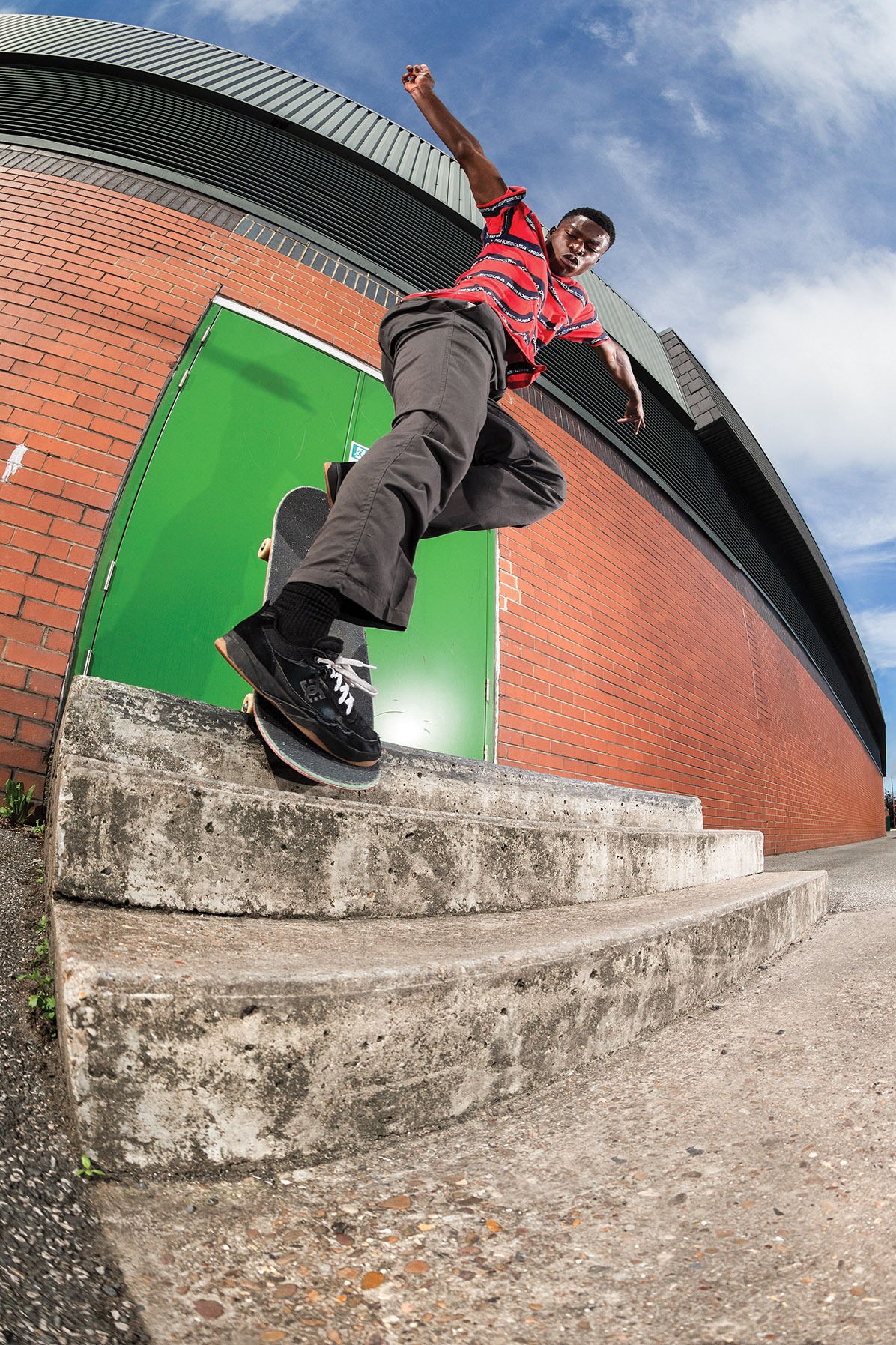 Now we have it that you are a secret Street Dreams fan, are there any other skateboarders you look up to?

Lucien Clarke back then too definitely and now…Lucien too haha! Mike Wright as well… got the chance to skate with the guy, he definitely got me hyped.

It was important to watch a skate video when I was young and seeing someone who looked like me, the same goes for Shaun Currie, Kohran Gayle and Kyron Davis. They are brothers. That’s what you want to see when you’re growing up and it needs to be more like that whether you’re male or female.

I didn’t think about it too deeply at the time but with Black Lives Matter and talking amongst my friends, you do reflect on it especially when it comes to your influences. We need more black men and women in everything.

It’s made me realise that seeing everyone and going to different cities through skateboarding just like with Calvin and Faro, wherever they are was so necessary for me. Not just to learn about those other cultures but their experiences too. Now with the new video in the works the people I’m looking up to are the Welcome crew. Josh Hallett, Dale Starkie and Will Sheerin the whole lot of them. I’m keeping up with them. If I’m going to get a clip it’s because I’ve got those guys backing me up.

There was a session which interludes in ‘Paul,’ of yourself and Junior Adjei going ham at the Parkinson steps. Things have gone full circle with you filming for the next video and being part of the team.

That was a good time, neither of us landed anything. Haha Junior and I, Junior was sending the hardflip and I was on the heelflip. Nothing got landed, but that was us skating with the older crew.

Obviously we were walking down there, Dale was calling it saying send it or you’ll get my hurt.

I wanted to get down with this, it was definitely the time to push me. I’m hyped they wanted us to be there even if we did ‘stumble’ upon their session. I did feel bad though I was wasting the older guys time. 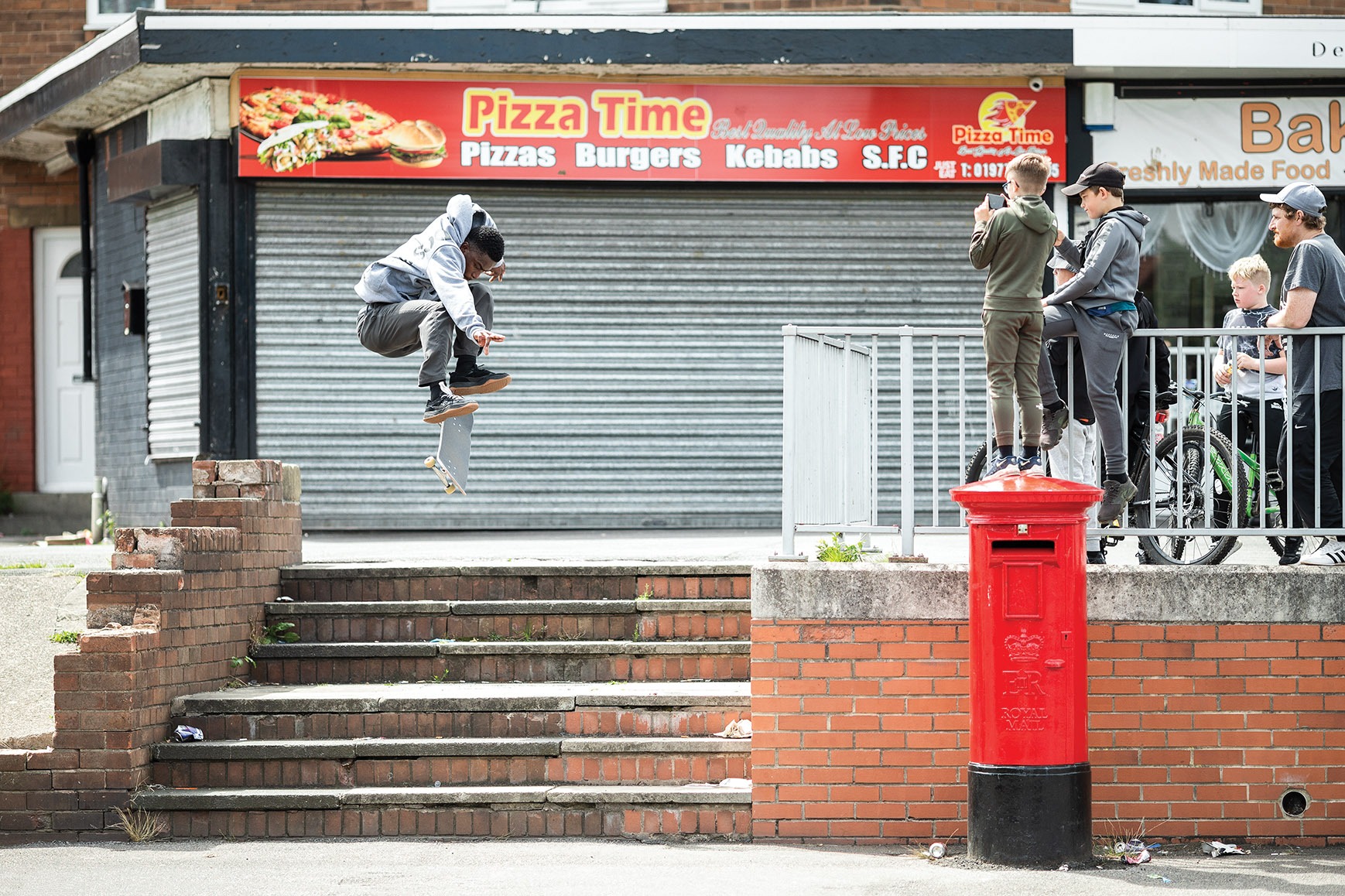 Josh Hallett: That’s how you skated though, you were apologetic and jumped into the session after someone else to not be in the way. That’s changed since you’ve grown.

Josh Hallett: When you’re a filmer you leave the house knowing that you’re probably going out all day and hopefully come home with a clip, that’s not wasting time. The skateboarder doesn’t waste the filmers time.

You’re currently getting flowed DC Shoes at the moment, recently you claimed you save the best shoes for last. What did you mean by that?

Ah man, I hold onto the Stevie’s! The OG Slim. Obviously big up Stevie the shoes are sick. Yo! Get me another pair haha. I’ve been filming a lot more for the new Welcome video so I’ve just got to get the right trick for these shoes, for Stevie man haha. When you have the fresh shoes you have no excuses. I need more of them. 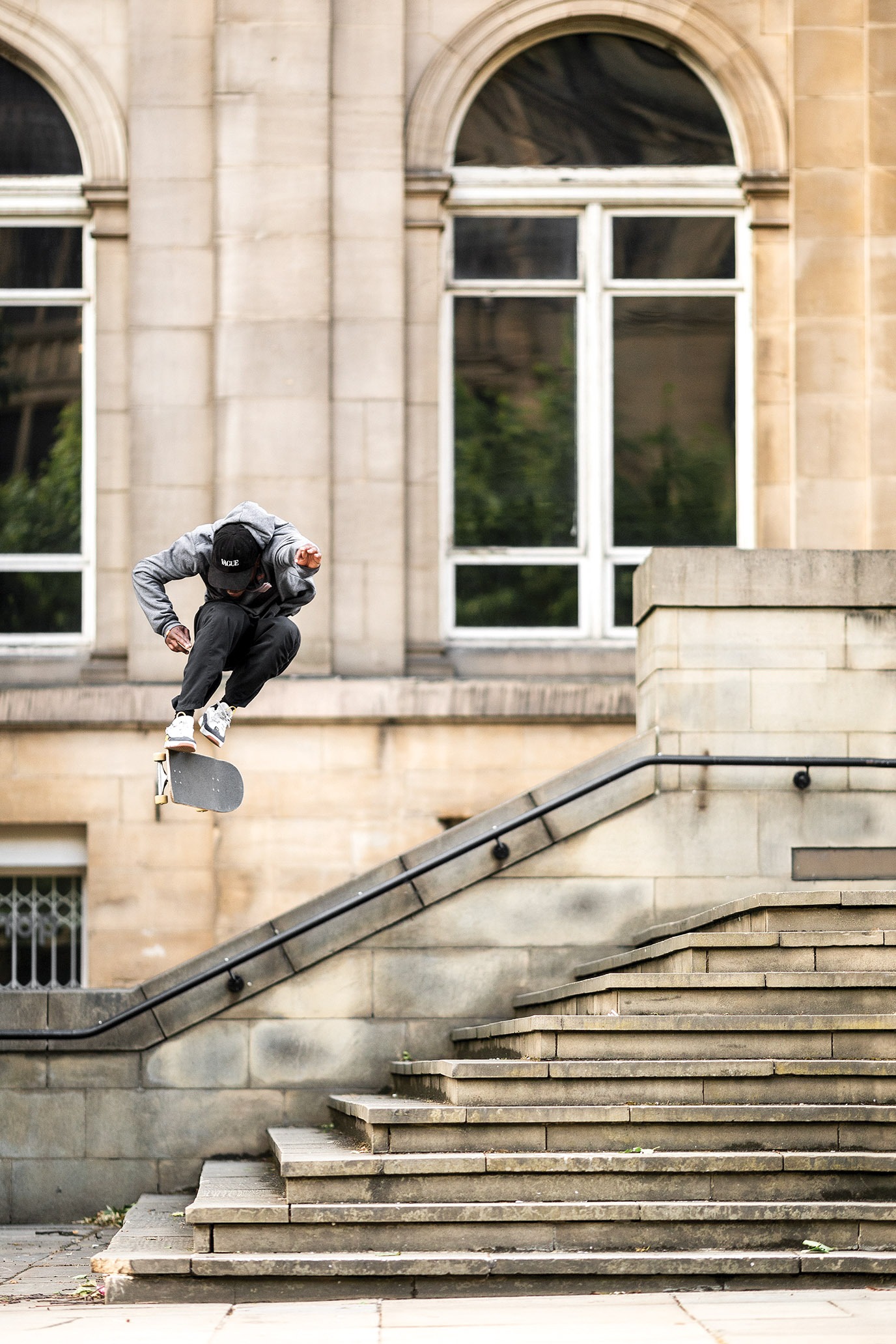 Are you worried about getting anymore sponsors?

I’d be lying if I said I didn’t want free boards haha. Who wouldn’t want to get them? I’m going through decks a lot at the moment  but Dale has been sorting me out when he can. Decks are like shoes, when you have a freshie there’s no excuses. I don’t get it when people can’t skate in new stuff.

Maybe it’s because you always had to scrape by for the new stuff?

Yeah maybe, but you’ve got to make the most of what you have or haven’t got. I’m just fortunate to have help, whether that’s having Dale’s second hand decks or getting some discount through the shop.

I just want to say thanks to Tanaka for getting me that first board, thanks to the UltraBoiz, everyone at Welcome for supporting me, thanks to Josh Hallett for giving me the chance to film when I was that kid trying to send it and shout out to Vague especially Reece for shooting photos.

After the release of Eddie's powerful 'Cornwellian' part we have uploaded his full interview from Issue 17.