With Calvin Ligono’s new part dropping for Wayward featuring a large dosage of his tricks in video form which were seen in his Issue 8 interview we thought we might as well upload the entire interview shared with fellow bestie Faro Phiri. Read below to see their take on each other!

Ah yeah! The box of fucking toys! Faro Phiri and Calvin Ligono are the fucking duo to be reckoned with! Absolute adoration for these two as the first 2 sentences attempt to say, because they’re so close we thought we’d take the concept of the 90’s ‘How well do you know your partner’ for the basis of their joint interview. In conclusion they like each other possibly more than they even acknowledge, and so do we. Get your head around that one! 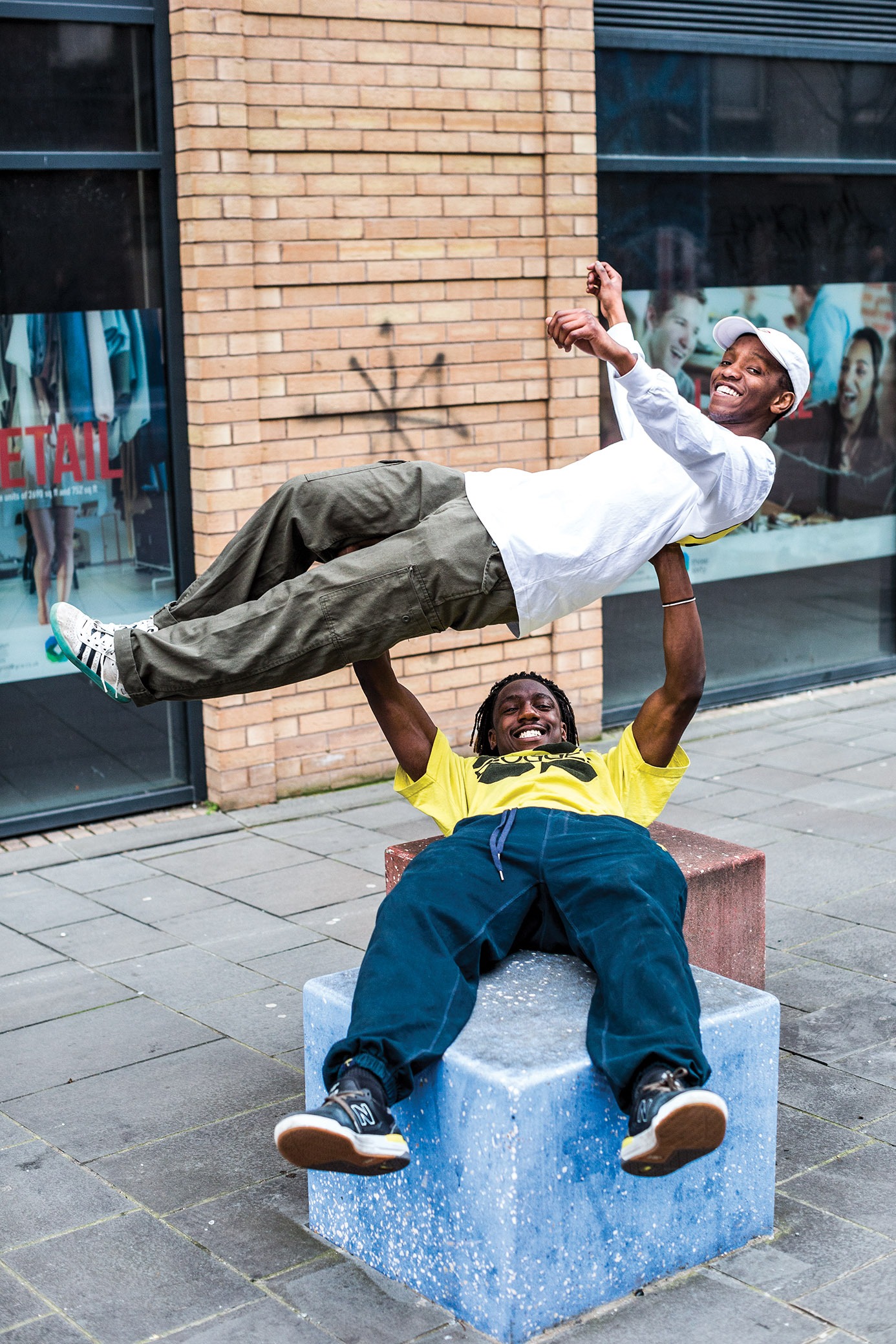 Faro: Something emotional for when he’s with a girl, so she’s

already disappointed when he shows her his lil mamba.

Where were they born and where did they grow up?

Faro: Born in Washington, D.C. and then Rotherham.

Calvin: Born in Kenya, grew up in Washington, D.C. and Sheffield.

Who’s the most Yorkshire?

Faro: He’d say me cos of the accent. 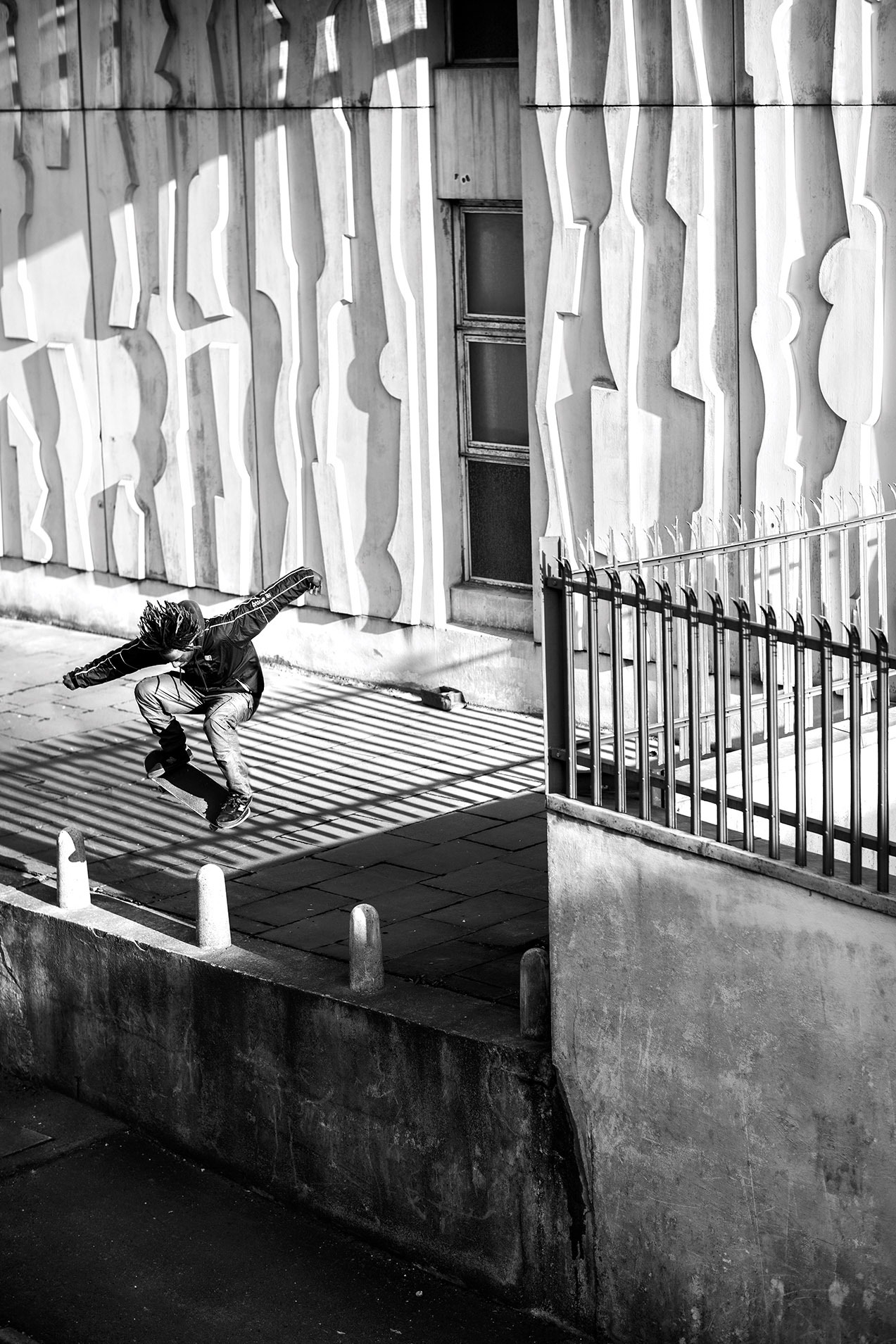 Outside of skateboarding what are they good at?

Faro:  Gym innit and chats a lot about killing it on Tinder but who actually knows eyyyy?

Calvin: I’m into calisthenics and fitness in general. Used to play basketball when I was younger as well.

Calvin: I don’t do karaoke.

Which celebrity were they super stoked on meeting?

Faro: I’m gonna go with Lucien Clarke as well (laughs) both gassed on him.

Calvin: Met Obama when he was campaigning which was pretty hype. 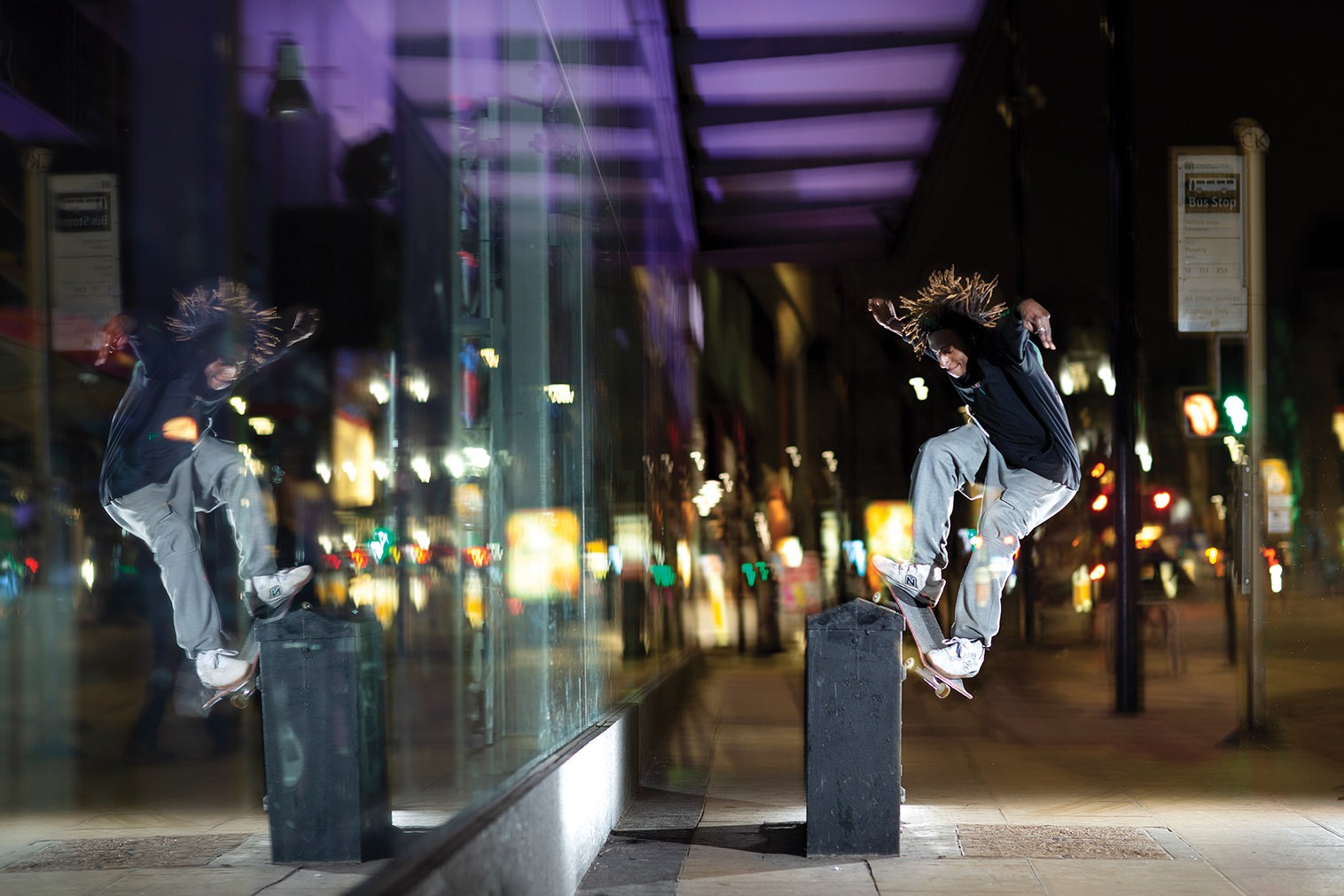 Faro: When Matlok’s cousin Eden was talking to him on a night out, mistaking him for me and left him hanging when he told her who he was (laughs) shouldn’t have ever told me that Cal.

Calvin: Faro’s got the slight edge on this.

Who’s more likely to get kicked out of a club?

Faro:  He’ll say me cos I get a too drunk all the time.

Calvin: Probably me to be honest. Faro would be getting dragged out by a bouncer and would start chatting nonsense, the bouncer would feel sorry for him and let him stay. I don’t think I could chat that much breeze.

Calvin: I got nothing to hide. 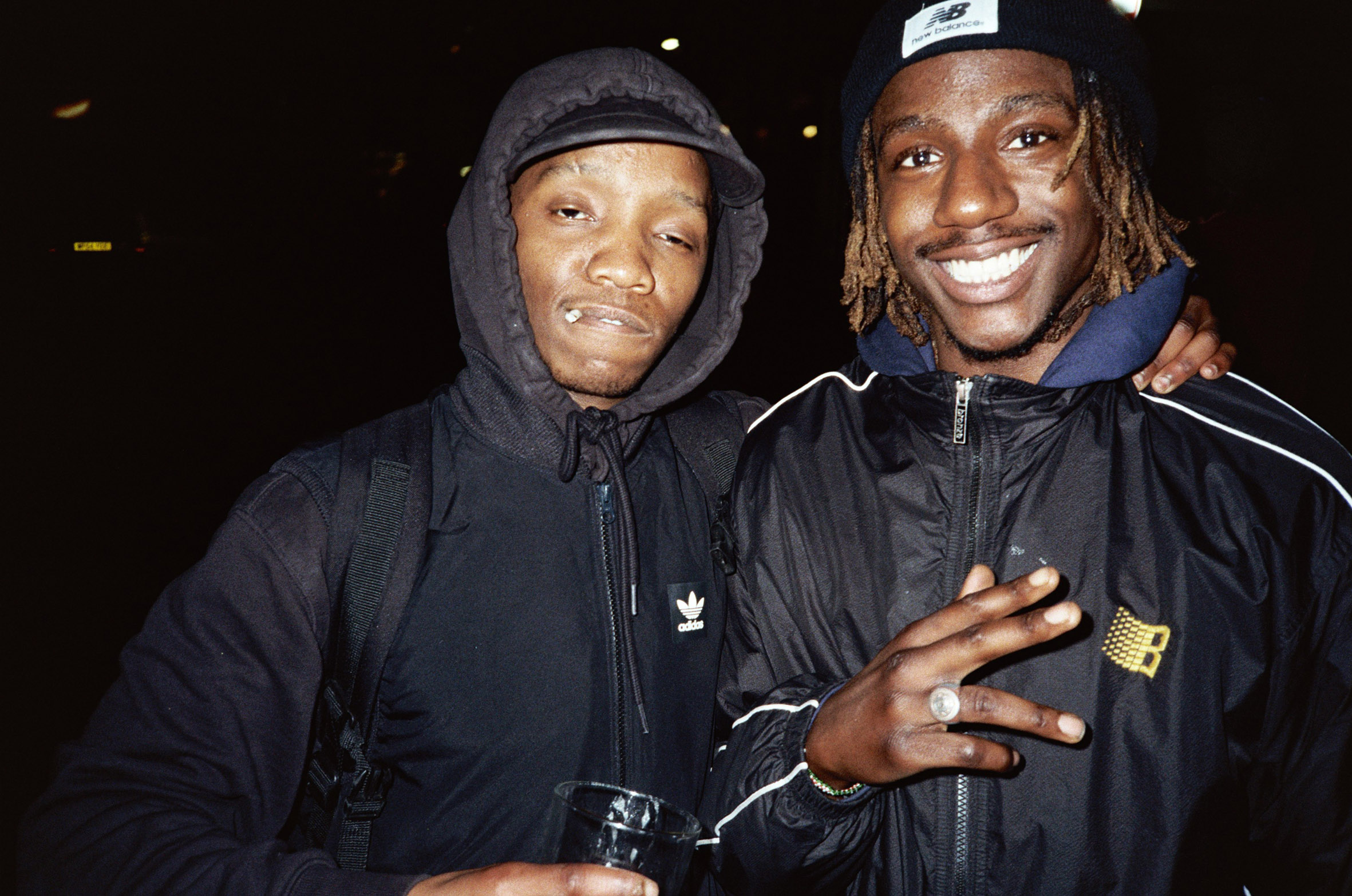 What’s their game of S.K.A.T.E speciality and weakness?

Faro: I honestly do not know that one.

Faro: Something like Power, if you don’t already watch it Cal you

could learn a thing or 2 (laughs). 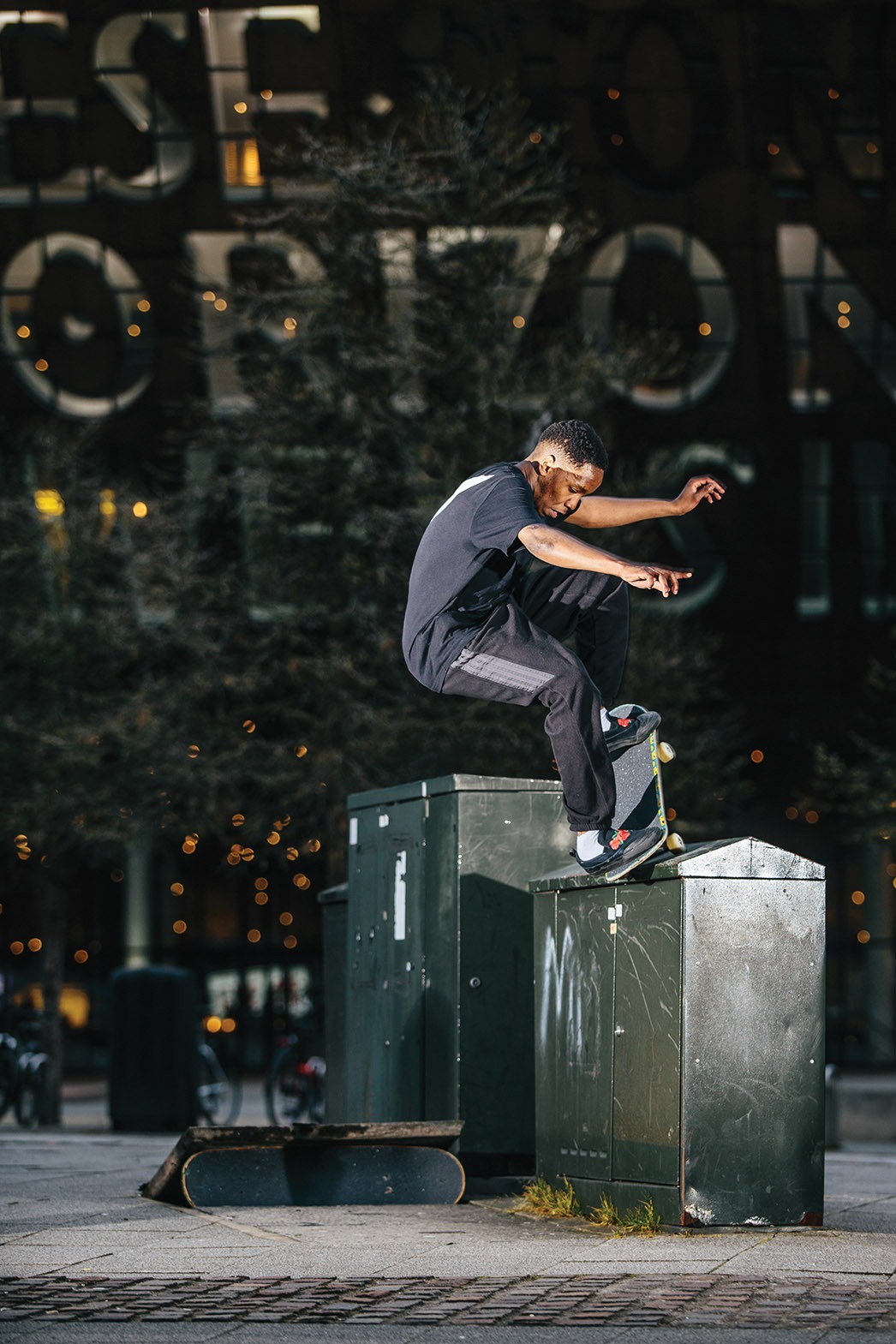 Where were they born and where did they grow up?

Calvin: Born in Zimbabwe, raised on the driveway at Thornes skatepark, Wakefield.

Faro: Zimbabwe till I was 9 and then in Wakefield.

Who’s the most Yorkshire?

Calvin: Definitley Faro. It’s not up for debate. Just ask him to say No (laughs) “NoOoOoOooOOo”.

Faro: Most probably me.

Outside of skateboarding what are they good at?

Calvin: The deep motivational chats he has with you when he’s drunk out of his mind at 4 in the morning. Dishing out life advice whilst slumped against a light post with one eye shut and the other one not even looking at you. Not to mention the beer spilt down his hoodie. He’ll then finish the epic rant on how to sort your life out with “Oh noo0o0o I’ve lost mi’ bag and passport again. Gonna have to borrow some money off my sister”. Oh and raising Kennelly’s blood pressure.

Faro: Probably chatting shit (laughs) or playing Xbox, used to be good but can still beat anyone on COD or Fifa (Matlok and Joe Mcalone got lucky). 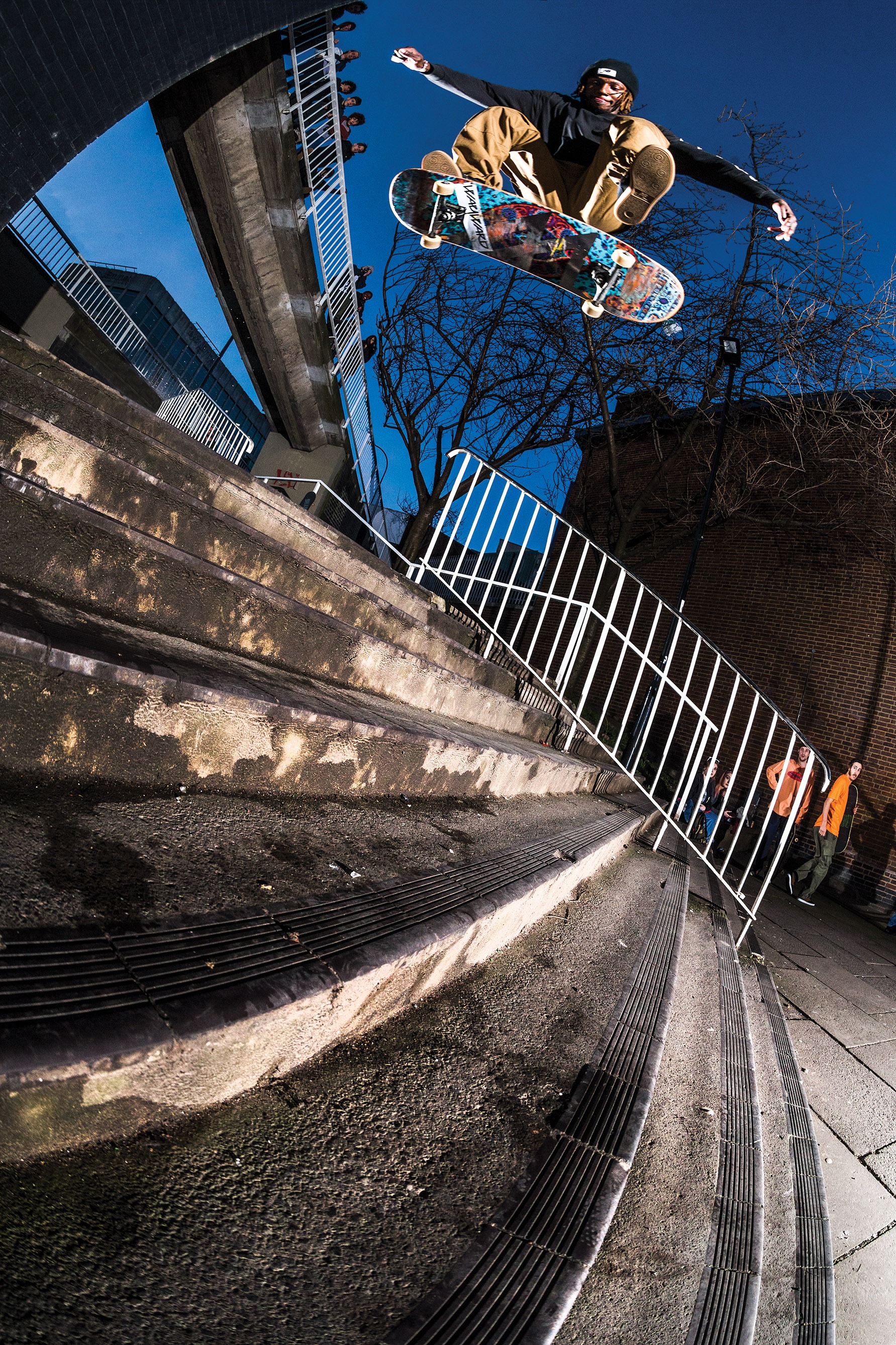 Faro: At the minute its SahhBabii – Army or Unknown T.

Which celebrity were they super stoked on meeting?

Calvin: Ishod Wair. Instagrammed it and made the longest life story caption of how he was watching him and finally built the courage to talk to him the little schoolgirl (laughs).

Faro: Ishod, duh! And Lucien Clarke, he’s a celeb right? Are skaters celebrities? When I met Ishod, we had just got to Copenhagen and while trying to pick up a deck, the first spot we went to (that big but little bowl with ledges surrounding) Spole Jefferson had skated off in front and skated back with a super big grin on his face and was like “You’ll never guess who’s there”. 100% I didn’t think it was gonna be Ishod and when I got there, literally gasped out so loud and I just sat and watched him the whole time he was there (laughs). I took a good half an hour to build up the courage to ask him for a selfie, so I just sat there with my phone on camera for ages (laughs). Outside of skating I’d say deffo D Double E. I was stood in the middle of the street with 2 other people and I couldn’t contain it! He was walking by himself looking for weed, never been so gutted that I didn’t have a dealers number for weed…we got a selfie though (laughs). Chris Kamara was also jokes, sound guy. I saw him walking and was like, “Who’s that Lionel Richie looking guy?” then I clocked his Sky Sports jacket and it hit me who he was (laughs). 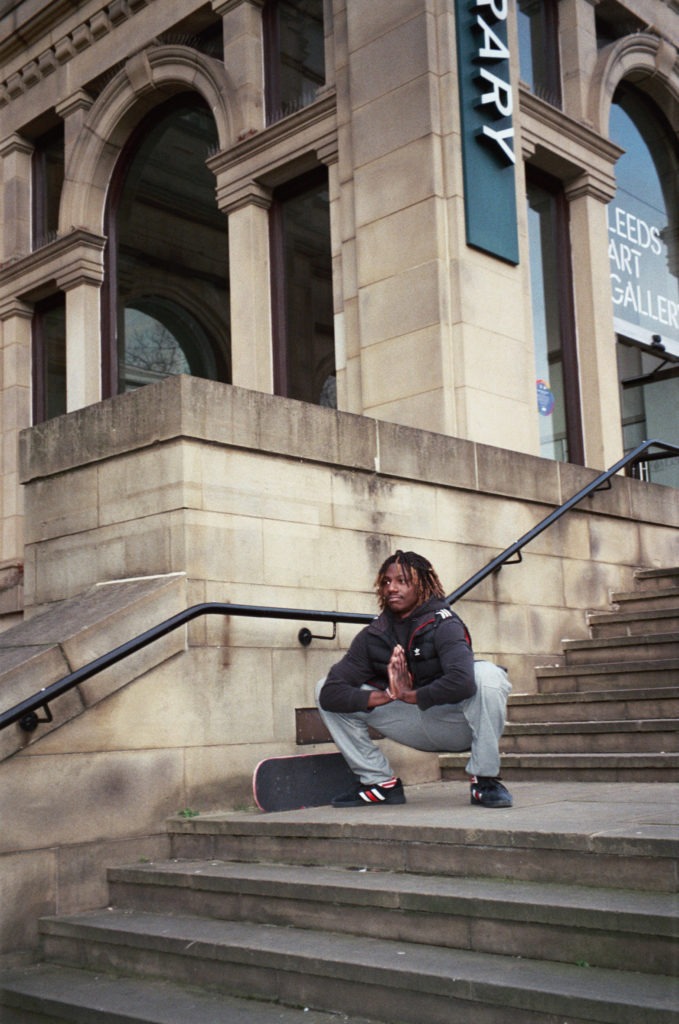 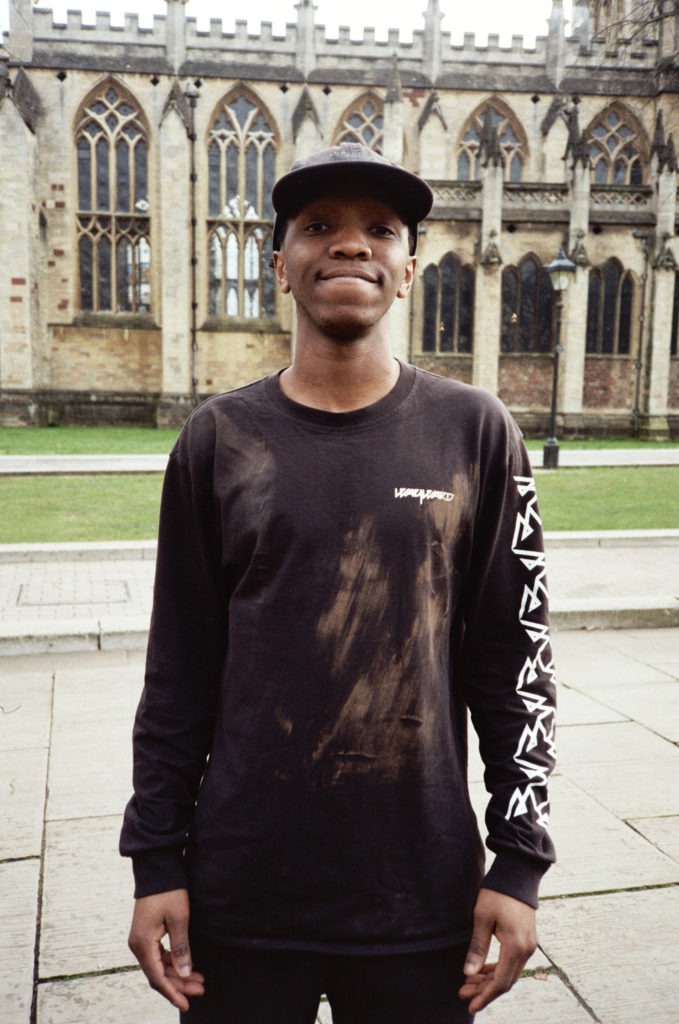 Calvin: Buy Faro a pint or 2 and watch his whole life story start pouring out. Kennelly never used to send him his footage through WhatsApp. One Saturday night comes around, he’ll start showing everyone all the footage he’s been stacking for months. He ain’t keeping shit to himself.

What’s their game of S.K.A.T.E speciality and weakness?

Calvin:  His specialty is losing.  Weakness is flip tricks. 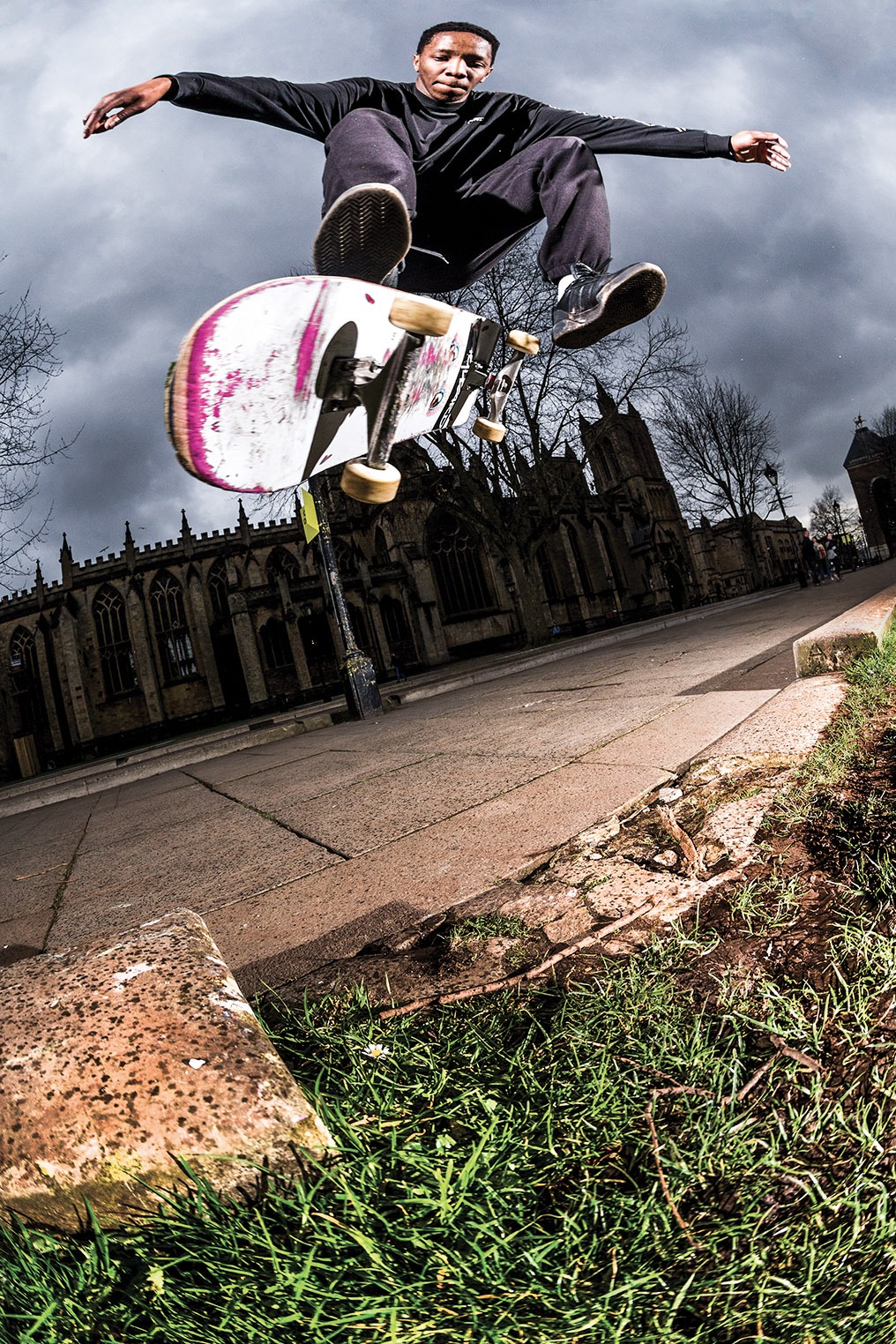 Faro: Don’t think he knows but my lil sister makes a banging lasagne.

Faro: If it’s on Netflix but probably Brooklyn 99 at the mo. 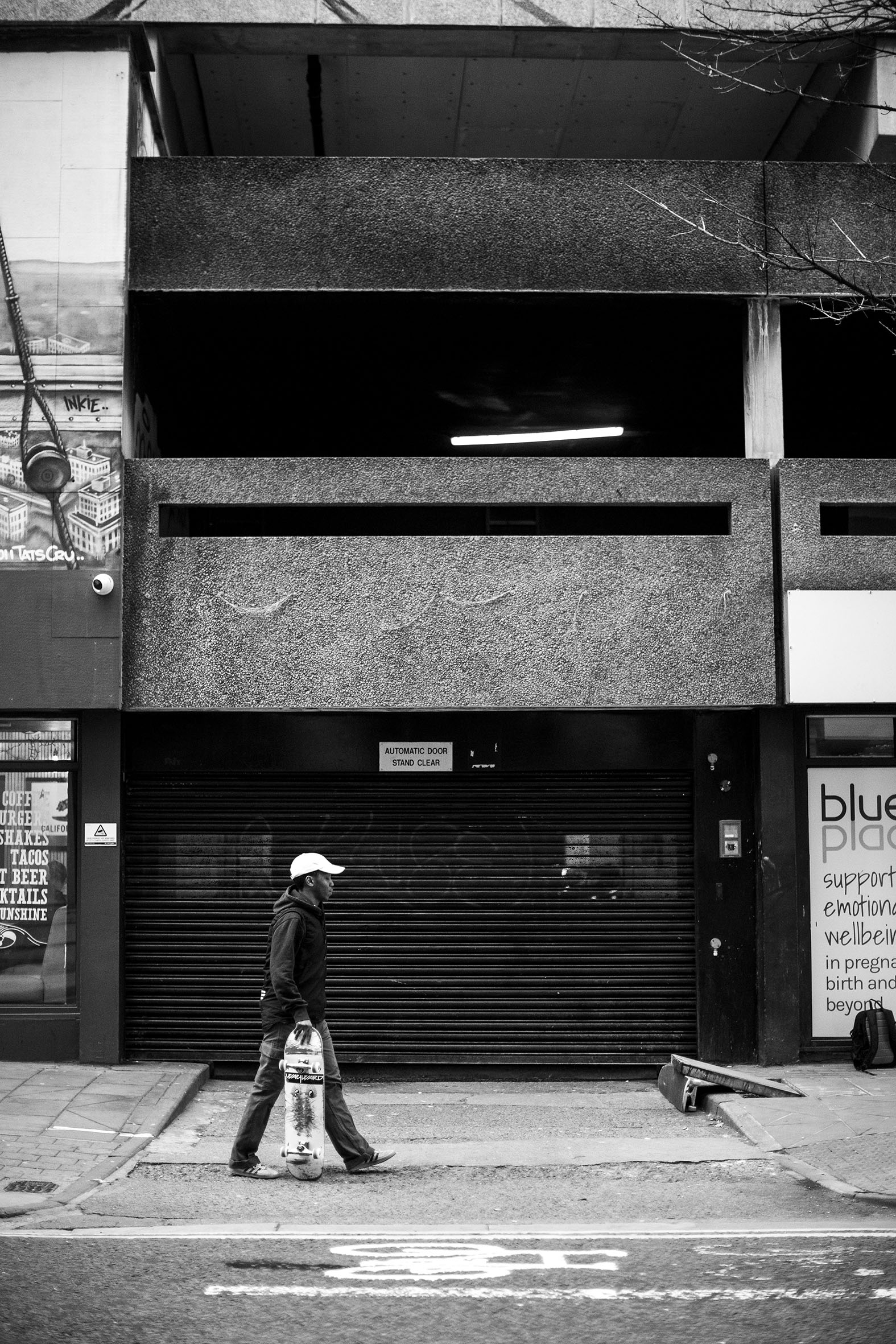 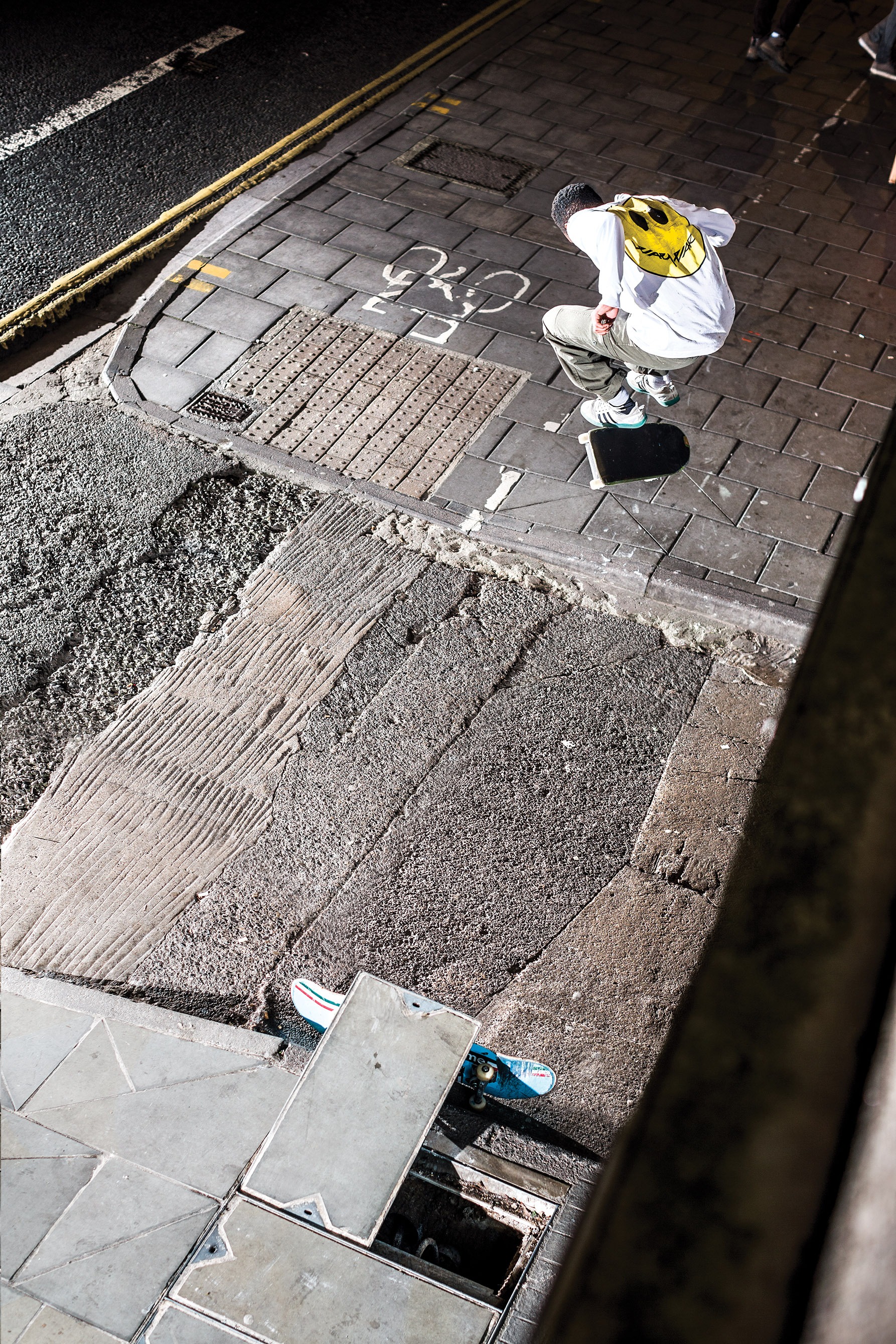 Filmed and Edited by: Forde Brookfield

Our fave Calvin Ligono has new clip out for Wayward. Filmed by: Forde Brookfield.