Faruso and Jin, our favourite London based DJ’s, both beautiful and talented shred stickers in their own right. They emit style and charm in everything they do, so the combination of them both is overwhelming in charisma. If you ever see these boys on a line up or if you want to pay them loads of money to bring the ruckus, definitely take the opportunity, you will not regret it. Also Faris slays it at Karaoke so basically these gorgeous chaps will enrich environments from gnarly locals to ‘kick your head in’ open mic nights to prestige London hotels where top musicians stay. Obviously we’re all about that.

Read their interview in full below from Issue 13 (get a copy HERE) and then enjoy a Vague x FarusoandJin – Isolation Mix filled with an uplifting selection of G-Funk, Soul, Hip-Hop and R&B to get your solo party popping! 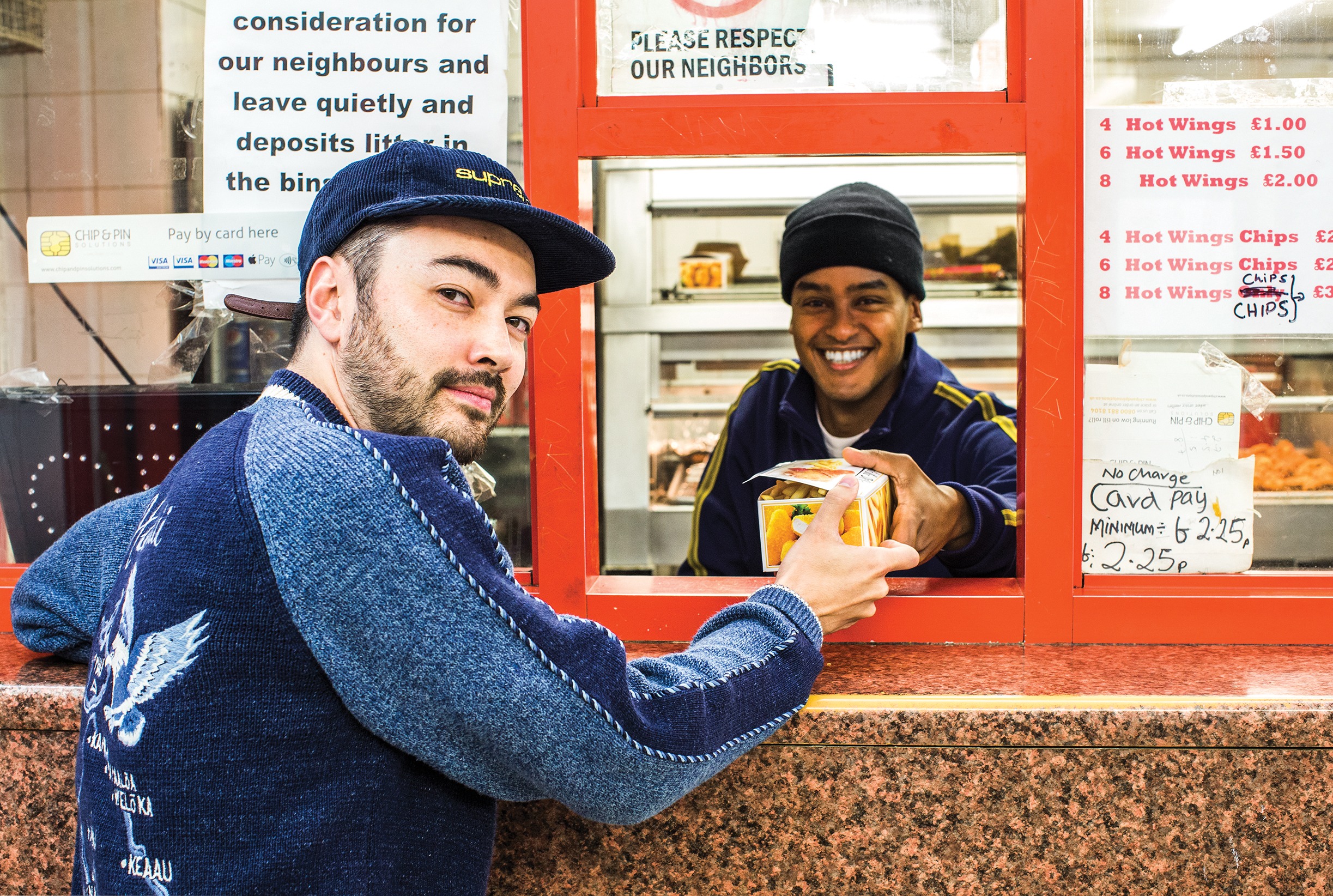 Can you remember the first time you met each other and was it love at first sight?

Jin: You know what I can’t exactly place the first time we met, we were both in different crews that skated Southbank and Shell Centre early mornings on the weekend, we would all acknowledge each other but we never really spoke to each other (laughs). Then I randomly bumped into Hold Tight Henry in Barcelona and that’s when we actually started talking to each other but I think Faris’ brother Rami was on that trip, not Faris (Faris can shed some light on that). Anyways, after that holiday I started hanging out with Henry and crew… we started filming together and that’s how me and Faris ended up becoming mates.

Faris: Yeah, that’s right I remember Henry came back with a little banging clip of Jin doing a kickflip over a wooden barrier at Sants! (I can’t remember why I wasn’t there)

When did you decide to start playing some of the finest sounds this side of the equator? Did you witness the other getting stood up for a date and proposed DJ’ing together as a way to take their mind off it?

Jin: So it must have been about 3 years ago now, both of us would end up being on the laptop at every house party choosing the tunes and sometimes they would be popping! So we were toying with the idea of it, and one day Faris was asked on a night out if he was a DJ and he said “Yeah?! Me and my mate are”. Which meant we ended up playing our first ever gig at the Ace hotel. Faris will explain…

Faris: Yeah I was in a cab with a few people playing tunes off my phone and it was going down well when someone mentioned they were looking to fill a DJ slot, I bigged us up a bit and maybe overstated the level of our skills/experience at that point… but yeah that was it, got a flyer sent over shortly after with Faruso and Jin on a line up at the Ace hotel (laughs). Shout outs to Dee for the opportunity! 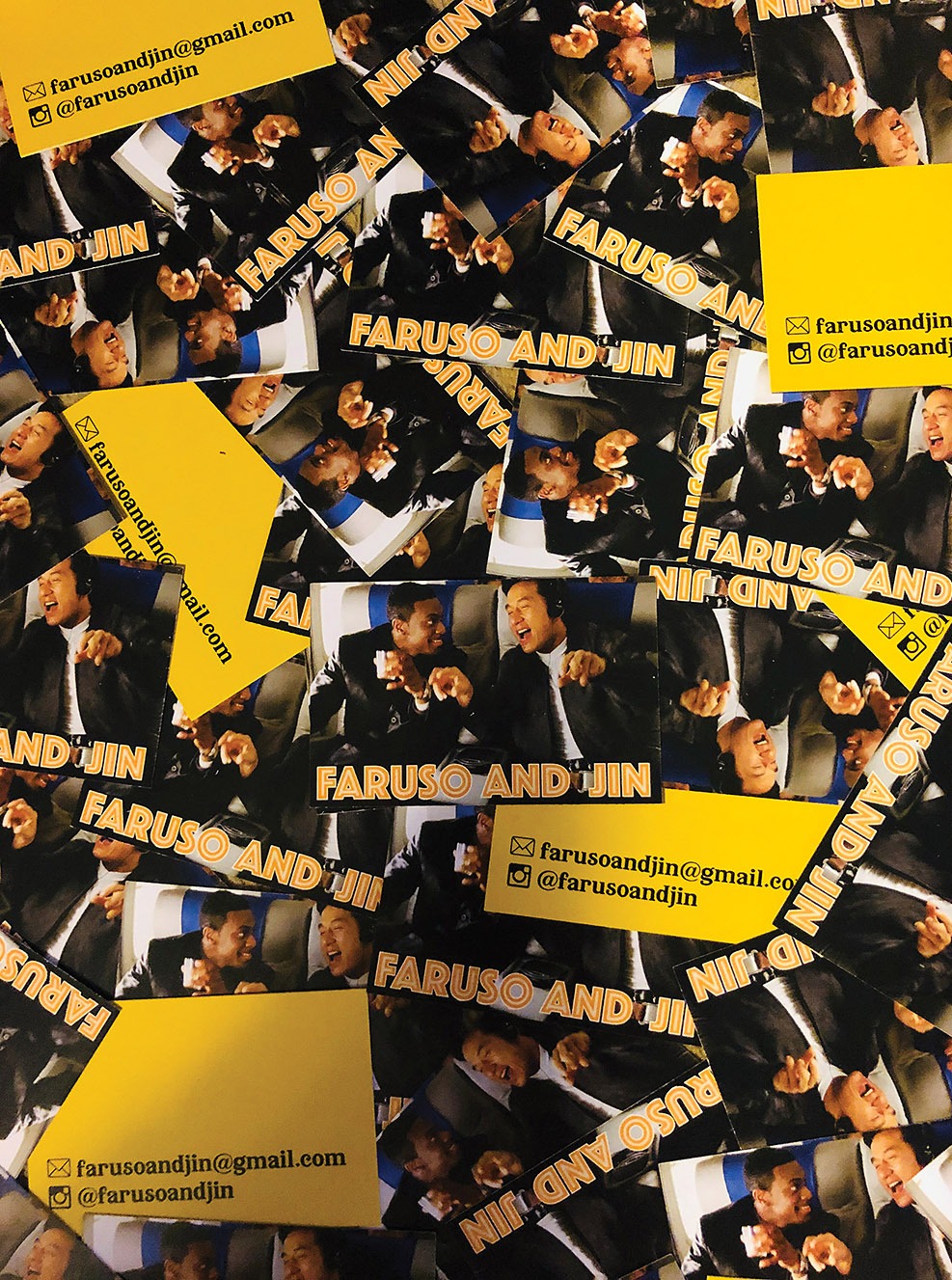 Were there fears at first at how the combination of charisma emanated from the both of you would be too much for society to handle?

Jin: Not sure how to answer this one, I think I worry too much about Faris’ bare chest emanating from his t-shirt whenever we go out.

Faris: Let’s be honest, nobody gets too worried about that!

Jin: Combo Meal 2 I think? A piece, wings, ribs, chips and a drink, for less than a fiver still. Can’t beat it.

Jin: I remember one night he was like “I’m gonna play Papa Roach! I’m gonna do it”, and I had to nip that in the bud very quickly. It’s funny we have both agreed on not playing tunes that the other absolutely hates. We agreed that he wouldn’t ever play ‘Shawty’s like a melody’ as long as I didn’t play a certain Destiny’s Child song… (laughs).

Faris: Yeah, that Papa Roach moment was funny but other than that we are pretty much on the same page. Not sure I’m ready to cancel Sum 41 just yet though… hold tight all my ‘Does This Look Infected’ fans. 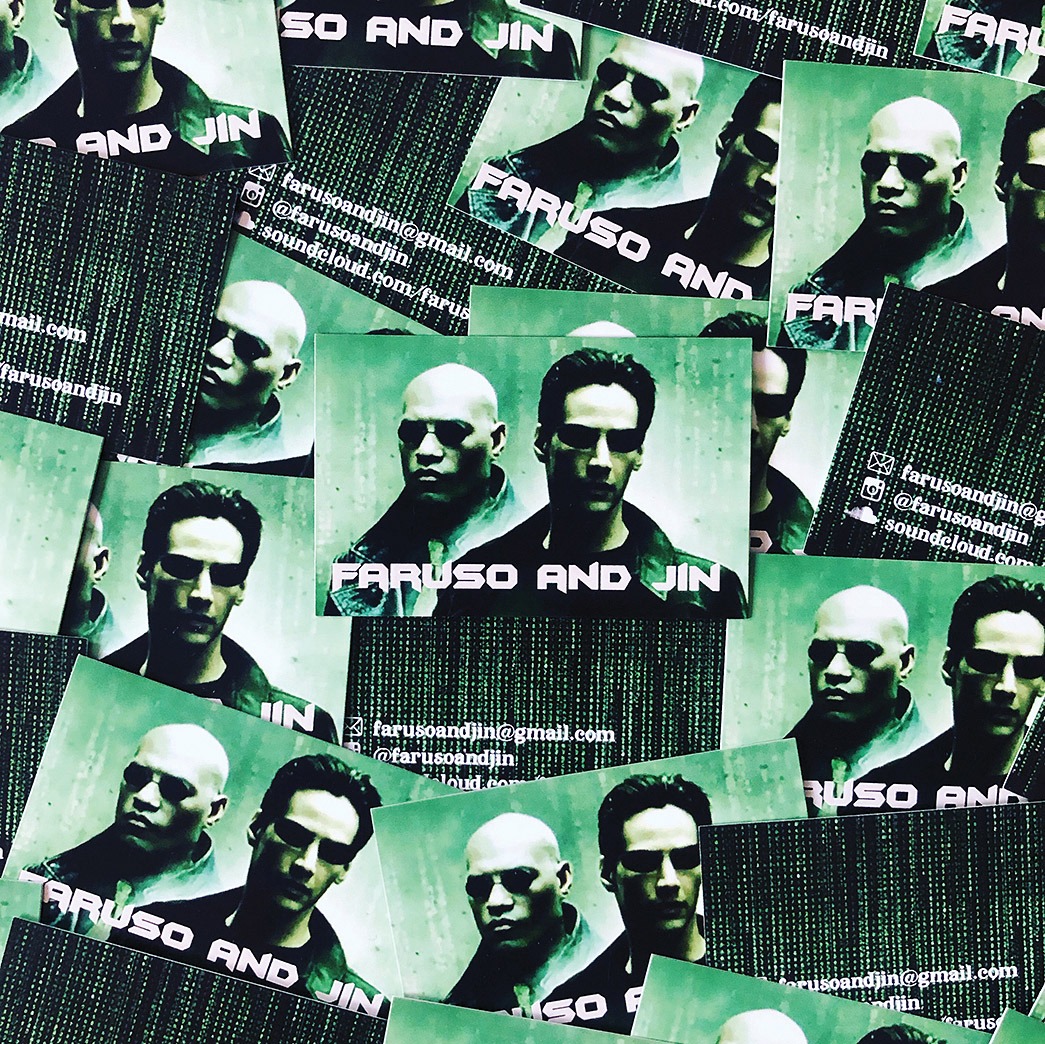 What are your musical guilty pleasures?

Jin: I’m just into cheesy R&B but it’s part of what we do, so not sure if it really counts as a guilty pleasure. Something like Tamia ‘So into you’? Banger. I’m going to see Ashanti tomorrow and my mates called me a diva (laughs).

Faris: I have already said too much (laughs).

You release a lot of themed mixes such as the east coast and A Tribe Called Quest bangers. Is this a platform to extend further afield from your live sets and what others have you got planned?

Jin: I guess those mixes are a combination of a few things. They’re essentially short half an hour ‘best of’ mixes obviously of artists/record labels/styles that we’re into but with the idea of unearthing a couple of gems that you might not have heard before. It’s also good practice for us, you can see the progression from our first mixes a couple of years ago till now. We have a Nas one coming up and a Vybz Kartel one in the pipeline.

Who picks the flyers as they’re always hilarious?

Jin: We both take it in turns really, and sometimes we get our mates to do them as well. Shout out Lucas and Hugo! With the type of music we play, that was a golden era for music videos so we’re spoilt for choice with jokes screenshots from them.

Do you follow the Insta ‘One Night in Faris’?

Jin: No, I just checked it… I think it would be much more interesting if Faris made that his own personal one.

Faris: No, and as engaging as the content is, I’ma have to resist. 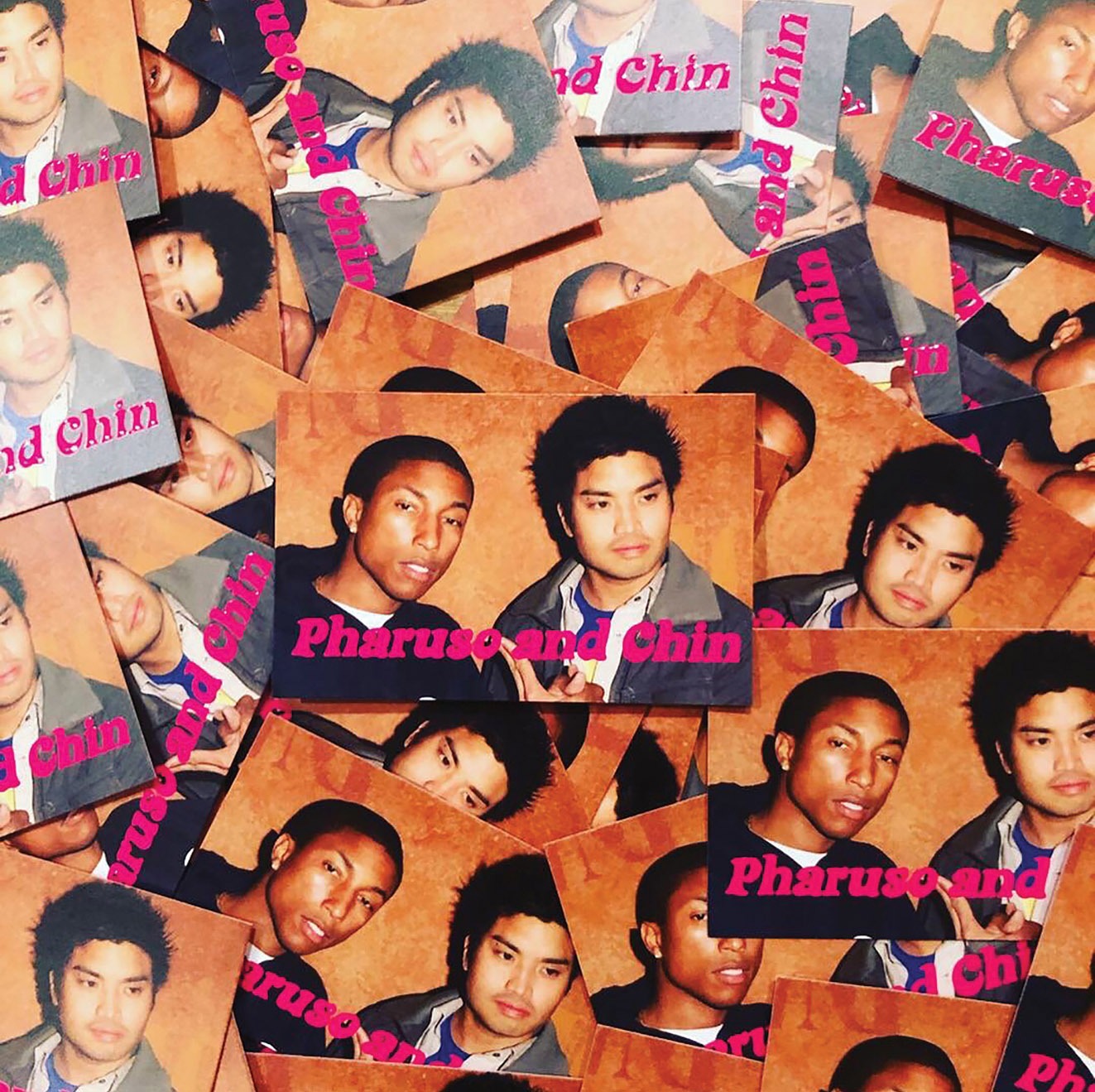 You’ve played a variety of venues, could you tell us the most prestige venue to the worst?

Jin: So as I mentioned earlier we played our first ever gig at the Ace. All downhill from there… the worst – well that leads on nicely to the next question.

How was playing Curtis O’Dell’s and Jake Church’s house party in New Cross? That must have been mad, also how do you keep it both underground and fancy at the same time?

Jin: Ah man, I remember when we first started playing (Jake) Snelling was doing handplants on the fireplace and shouting at us to “TURN THAT SHIT OFF”, but we got into the groove after a while and it went off! The key is to keep people dancing, crowds attract crowds! It was one of the first times we’d ever played but we pulled it out the bag – I think we were just taking requests and playing them off our phones at one point. That was when we were using Faris’ laptop, which would turn off if it wasn’t connected to a charger. We did well keeping it on for a good few hours but towards the end people were just walking all around us and unplugging it every few minutes!

Faris: Highlight had to be Snelling trying to do backflips off the mantelpiece. I wasn’t sure if it was a disaster or a huge success. I heard the next few parties weren’t as good though, so I like to think we enhanced the vibes a bit.

Ever had to turn down a gig?

Jin: No, but we did a couple of corporate Christmas parties and I don’t think we’re built for them. I don’t know how you’re meant to keep a whole group of heavily drunk 20-something to 70-something year olds happy in one place. They complain that you aren’t playing what they like and when you finish they demand you carry on playing… can’t win. 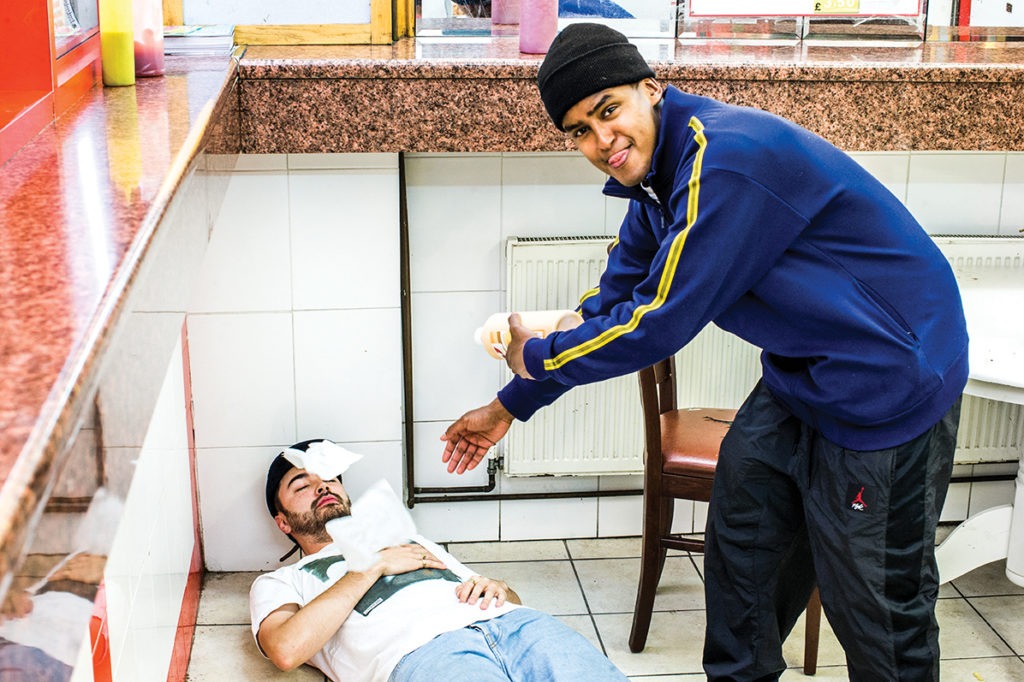 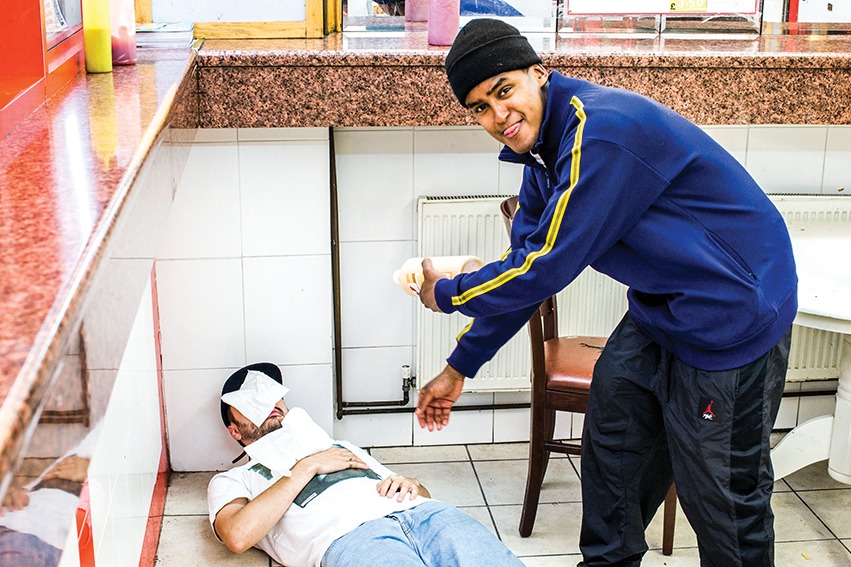 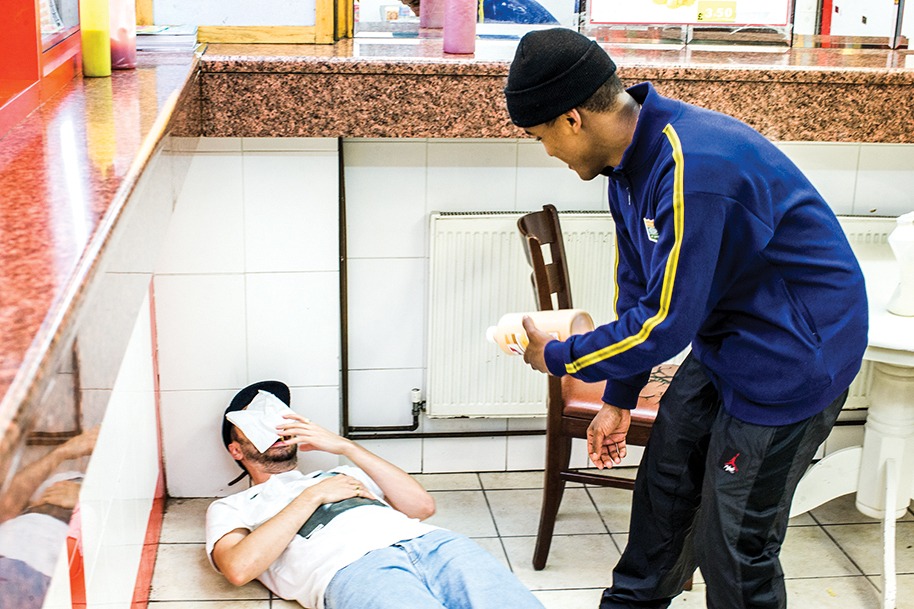 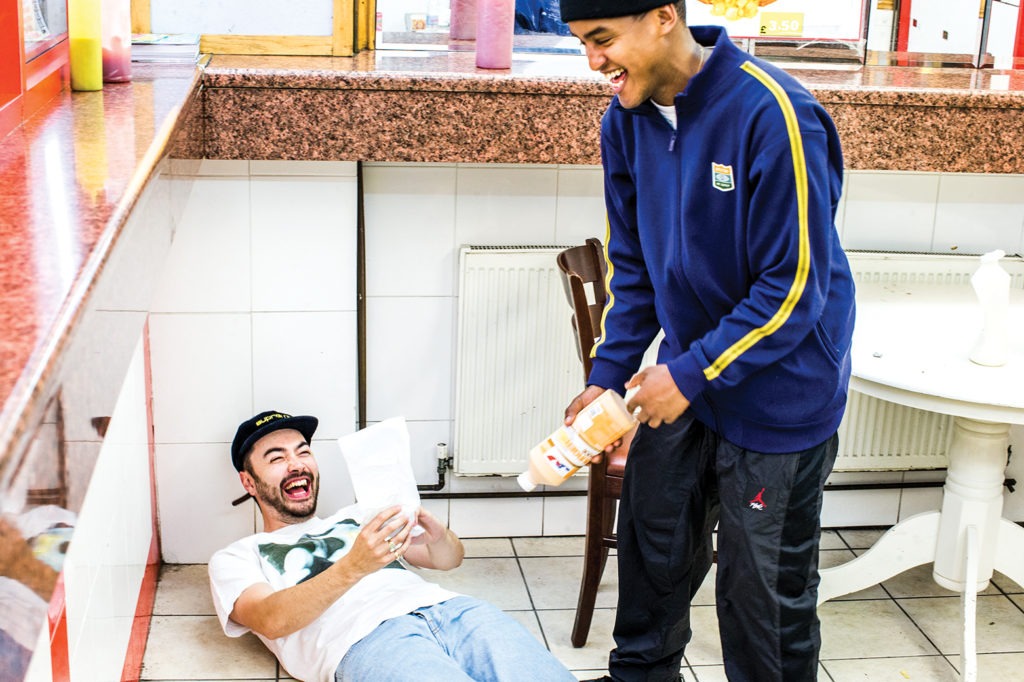 What are some of your favourite things about being on stage and what’s the maddest thing that happened at one of your gigs?

Jin: When you really get a crowd going, and people who genuinely love your set come up and tell you… it’s really gratifying. One time at a place I won’t name to protect the security guards… (laughs) this guy, I think I heard he was a dealer was bothering people, he was getting kicked out but he was not having it, it took two security guards to drag him out. A few minutes after he got the boot… he bowls back in through the back door and claims he’s got a gun and the two security guards just ran out of there! Everyone kind of panics a bit and runs outside. A few moments later we figure he was chatting shit and nothings really going on so everyone went in, had a shot and we carried on with our set!

Two Floors is a popular by demand Faruso and Jin set, talk about this magical place if you’d be so kind and the relationship you’ve developed there? Are you essentially celebrities? Anyone asked for your autograph?

Jin: (Laughs) No autographs yet. My girlfriend Cecilia was manager there and they have DJ’s on Saturday nights. We’d been asking to try and do a night there for a while. The first available night was New Years Eve into 2017 so we took it. It was a six hour gig, we still had no idea what we were doing, the laptop kept turning off and we were replaying tunes cause we ran out! Don’t know why they booked us again but it’s been our regular haunt ever since. Thanks Cecs!

Who’s your style icon and what is a food you hate?

Hate is a strong word. I dislike broad beans.

Can’t get on with grapefruits, trying to find a way, will let you know.

Who has the best R&B dance routine of all time?

Jin: Have you ever seen Faris with his top off doing the worm?

Faris: Agreed. Gotta give a major shout to Arthur Derrien here too.

Jin: Hopefully more skate related events, we did a few of those last year and it’s nice to do something within that community. We’ll see!

Faris: Yeah more mixes, parties and whatever else this DJ life throws at us!

Check out Faris & Jin via: @farusoandjin

A London scene video from the Concrete Poets - Writers Block filmed back in 2007 by: Henry Edwards-Wood.

We hosted our Magazine launch in London at Forest Road Brewing co. The legend that is Maksim Kalanep was there to document it all.