Santa Cruz Skateboards Europe ventured away to Gran Canaria luckily before the current isolation crisis during the month of January 2020 with fellow Flatspot pair Aaron Jago and Matt Beer as well as Cian Eades who all slayed the spots which this Spanish island had to offer. Featuring footage of tricks which you witnessed in Issue 13 of Vague Mag (get a copy HERE). Scroll down to watch ‘January’ and our photo article from the trip. All documented and captioned by Alan Glass with accompanying photos by Chris Johnson. 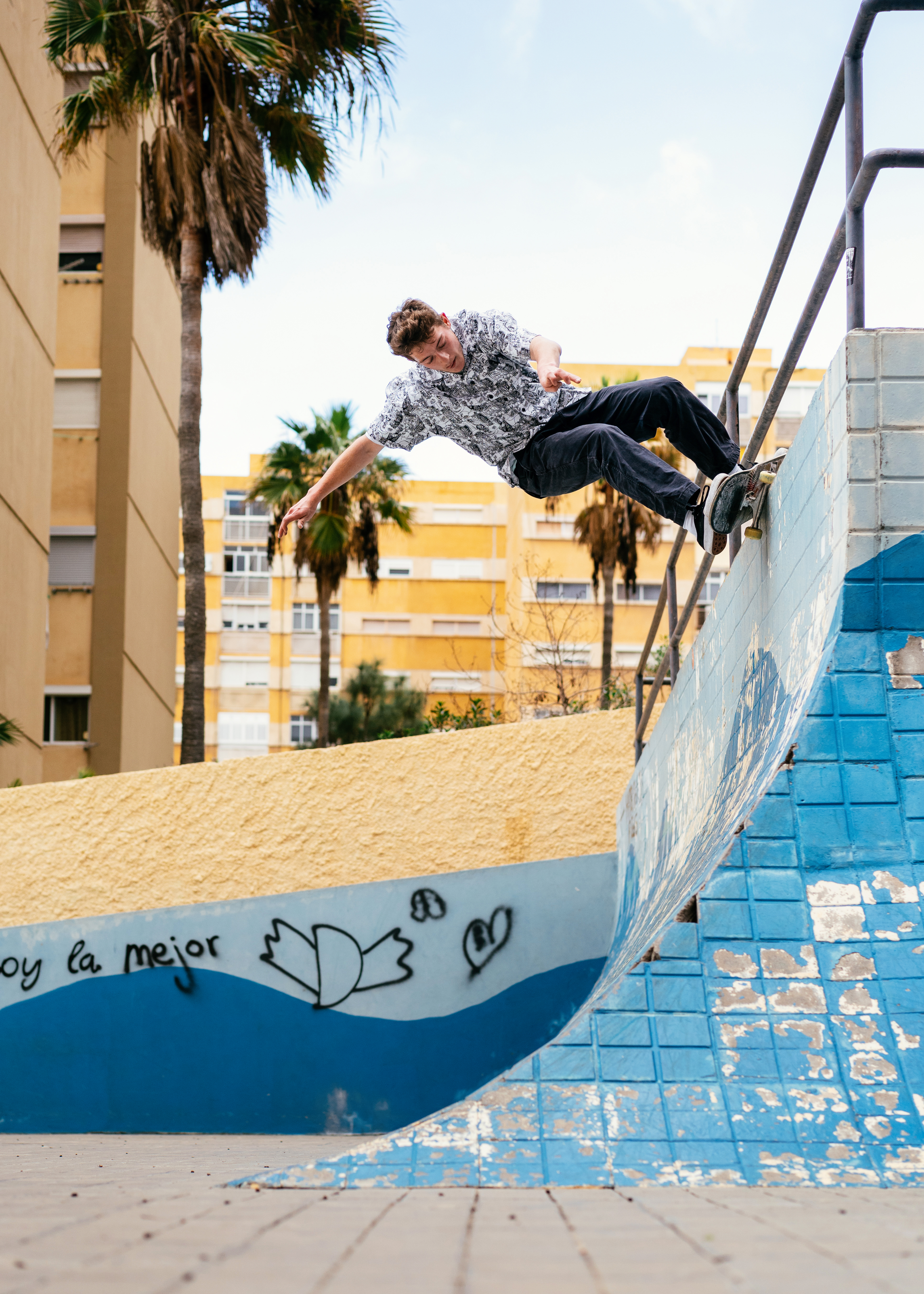 Matt did this pretty easily seeing as there isn’t much room for your board to fit under the bars above. There was a great bit of penis graffiti just out of shot which i had in the edit right up until the last minute until I took it out as I questioned my judgement on such juvenile humour. Wish I’d kept it in now as it was fantastically out of proportion with a huge oversized helmet and a tiny thin shaft. You’ll just have to imagine it. 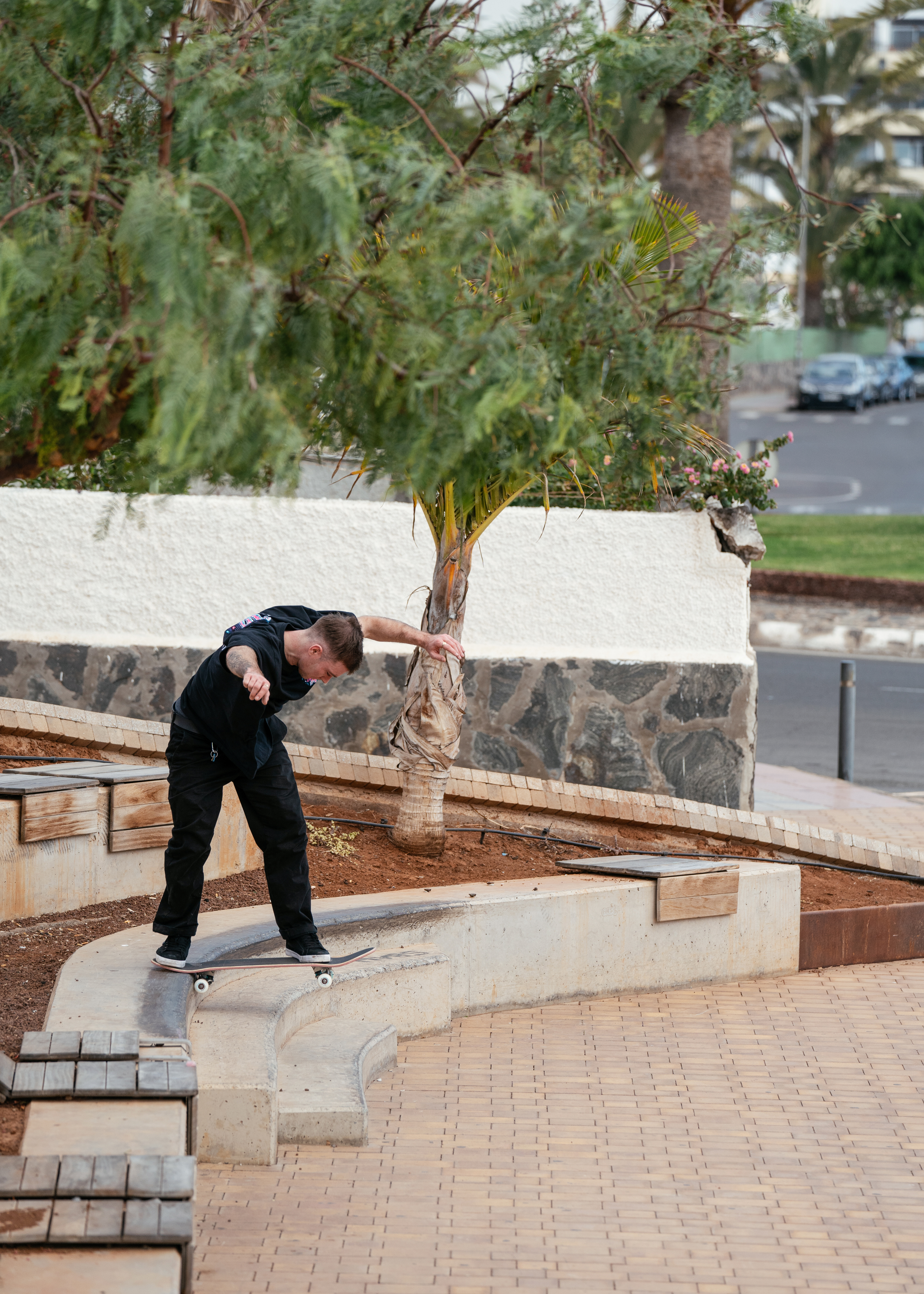 Cian did this to big spin out – could you tell if I hadn’t told you? Who cares? Make any ending up you like. He could have 900’d out of it if you imagine hard enough. 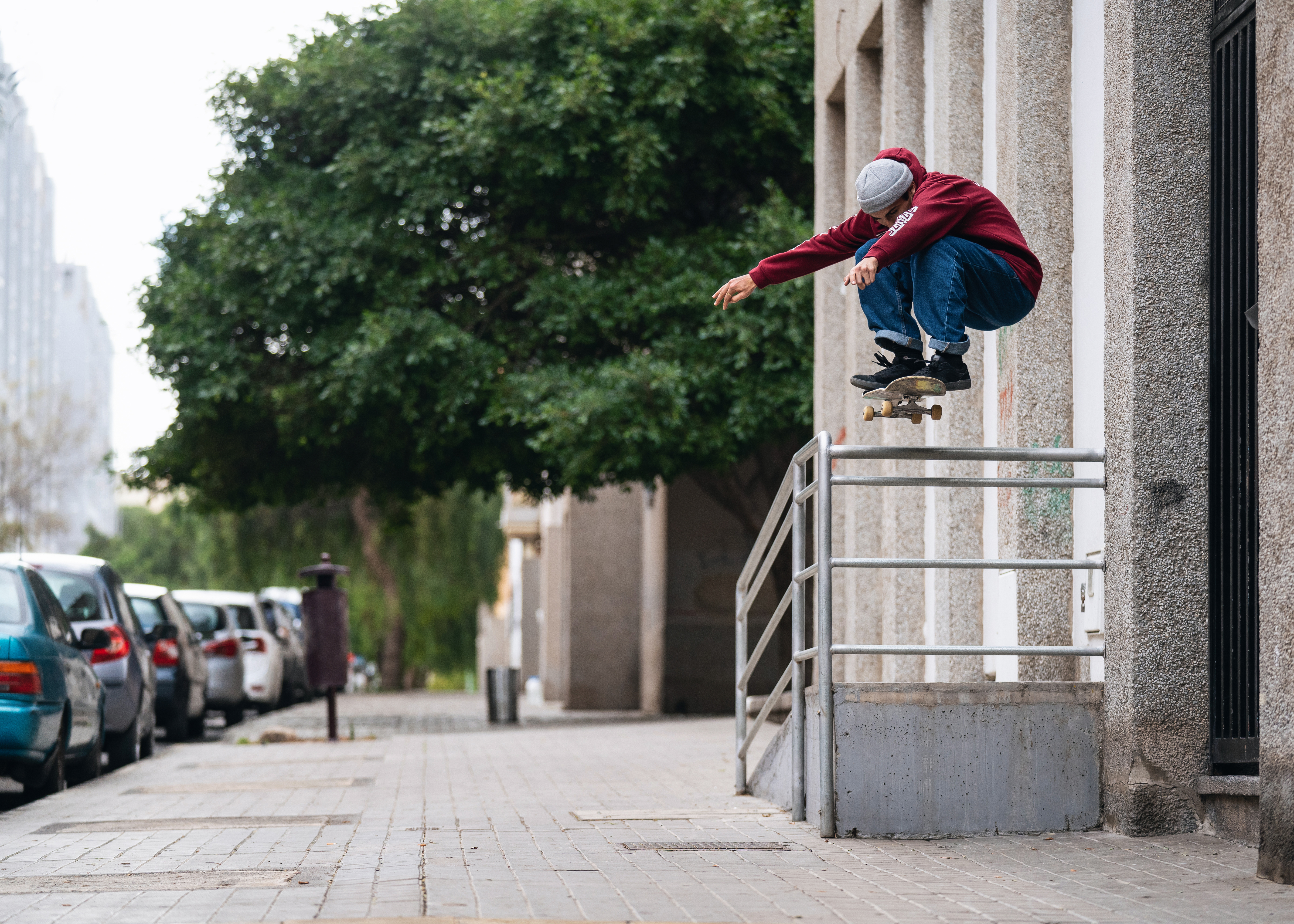 Bump to bar near the wave banks. This woman came out and ranted in Spanish. Standard stuff. You know how you replay confrontations in your mind afterwards? Well this lady was quite well dressed and maybe OK looking but she was unnecessarily mean, so I wish I’d had the presence of mind to tell her that she looked cheap. She’d have hated that. 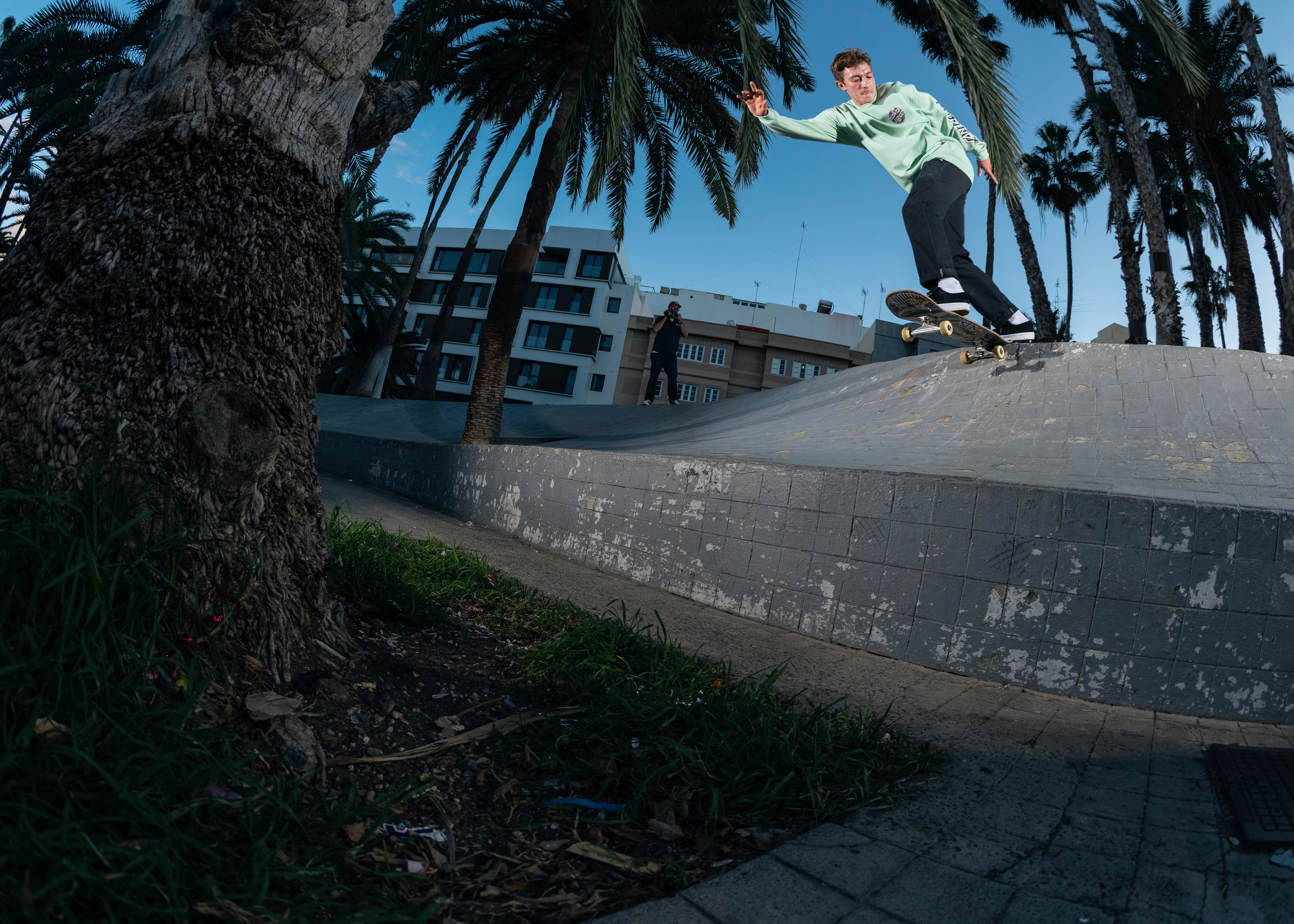 Back tail in what doesn’t look like it but is a very tight spot. You ollie up, slide and drop back down in about 1.2 seconds so it’s not easy. I kept calling Matt ‘Beeru’ on this trip, which is Japanese for beer but he probably didn’t know what I was on about as Cornishmen think the world ends at Truro. Just kidding Matt! It ends at Saltash. 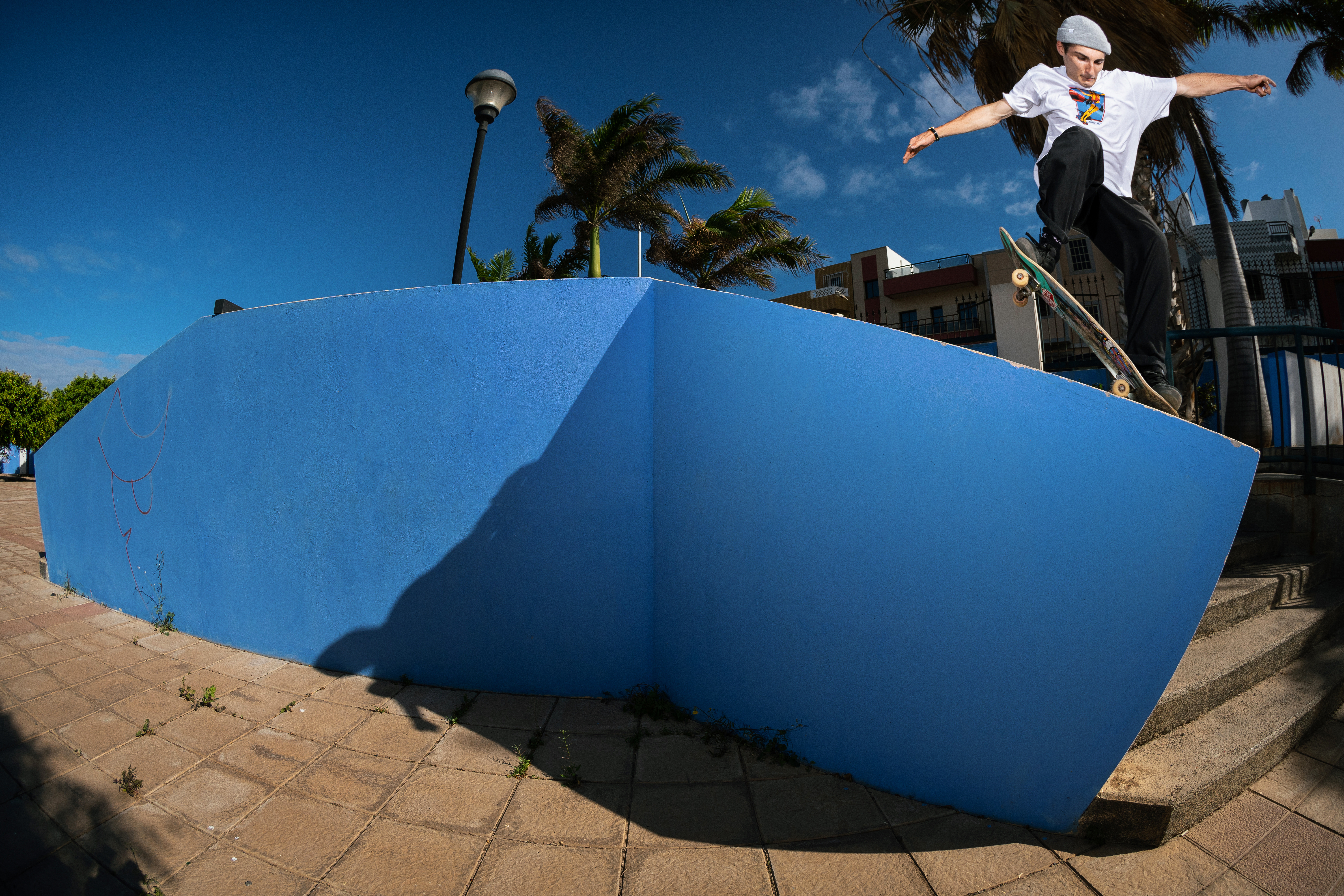 Aaron nosegrinding a really photogenic hubba.  He Bennet ground it too but we used that for an ad. Unlucky Vague! Wait, we ran the ad in Vague. Never mind. 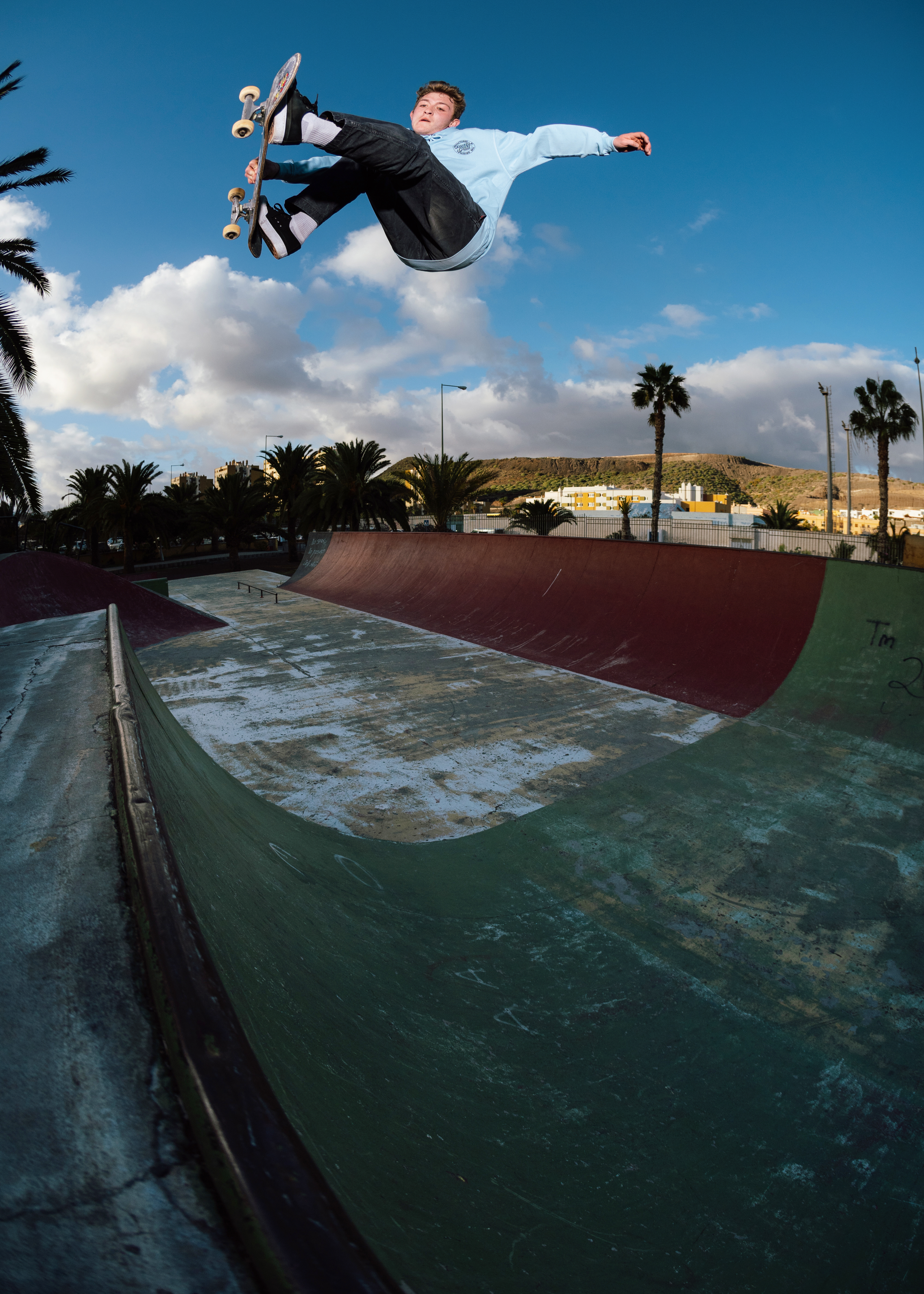 Matt Can fly. Did we mention that? He did a line here at Jinamar that went on for a minute straight. He did loads of tricks, some that most would find hard on their own. I couldn’t put it in the video as it was so long and he did kind of fudge one of the tricks. 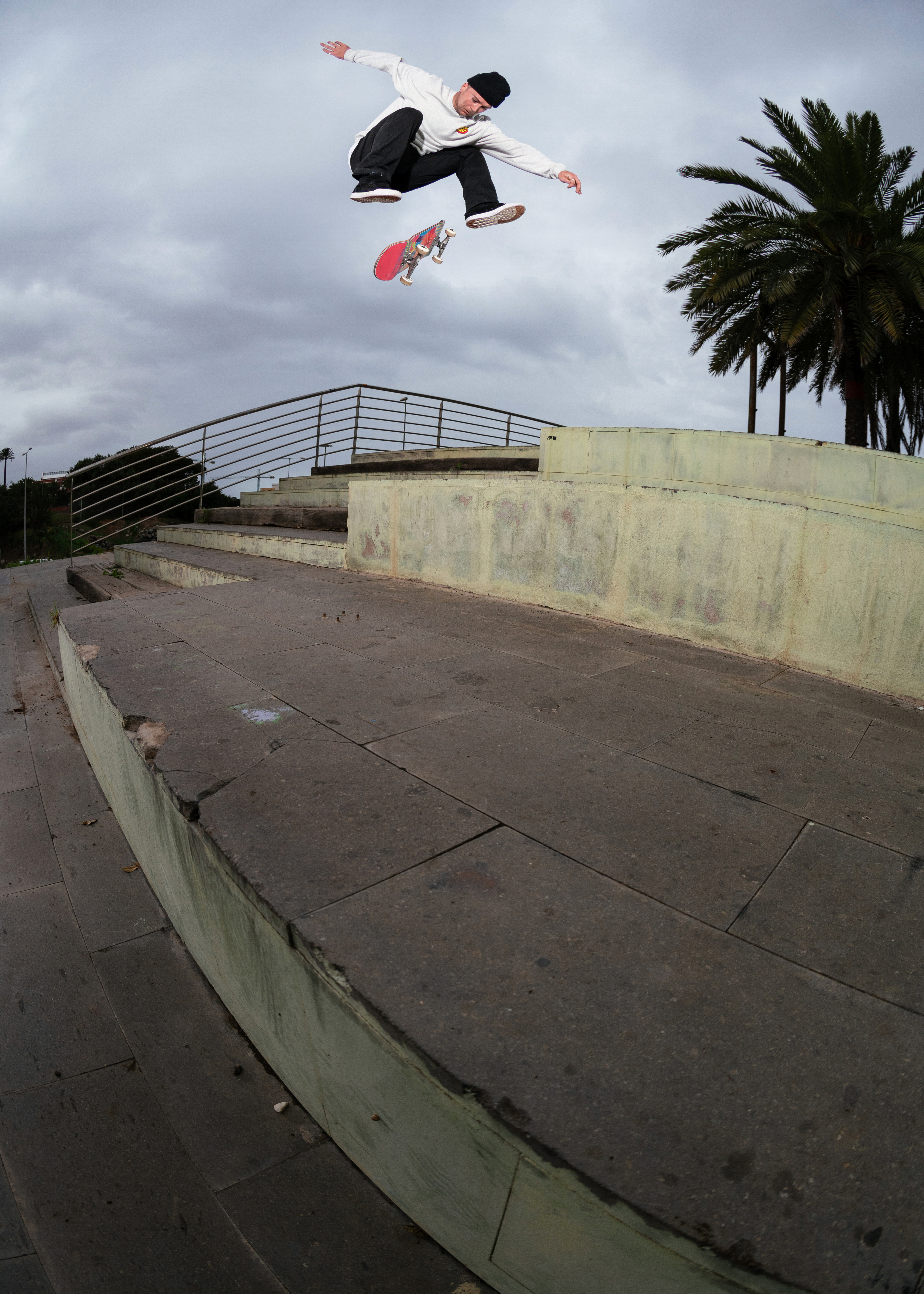 Cian can do basically anything switch down things. Switch hards especially. He said he hadn’t jumped down anything properly sine he broke his foot last year but you’d never have known it and he even did his trademark ride away where he claims something was wrong with it, even when it was bolts. 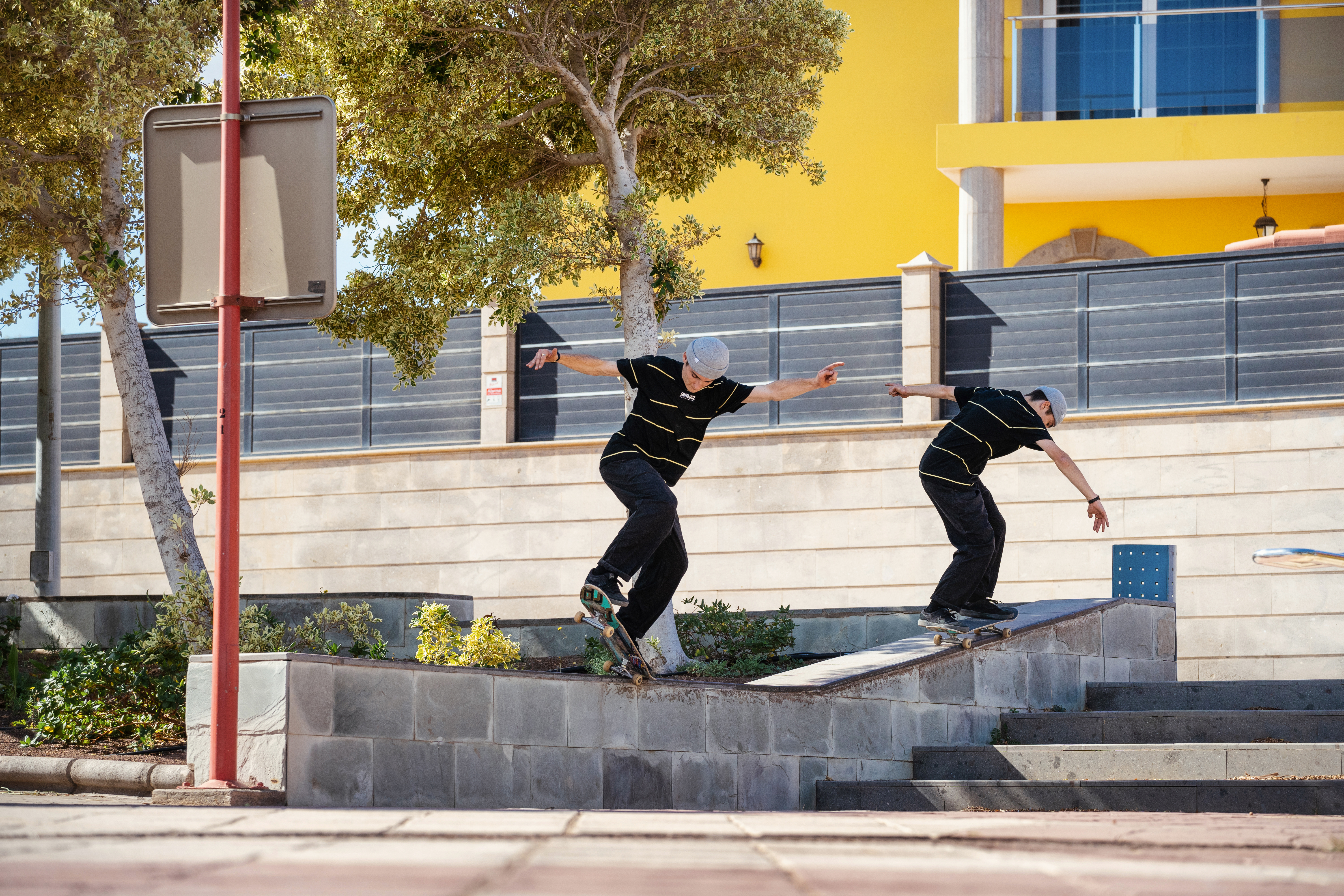 There were two Aarons?? Thank fuck there weren’t, our food bill was high enough already. It became a joke that our crew would order steaks at dinner which ordinarily would be expensive but out of season Spanish seaside resorts are a steal, in comparison to UK prices anyway. Plus if you have cheap shit for lunch you can make the budget stretch to a decent spot for dinner. 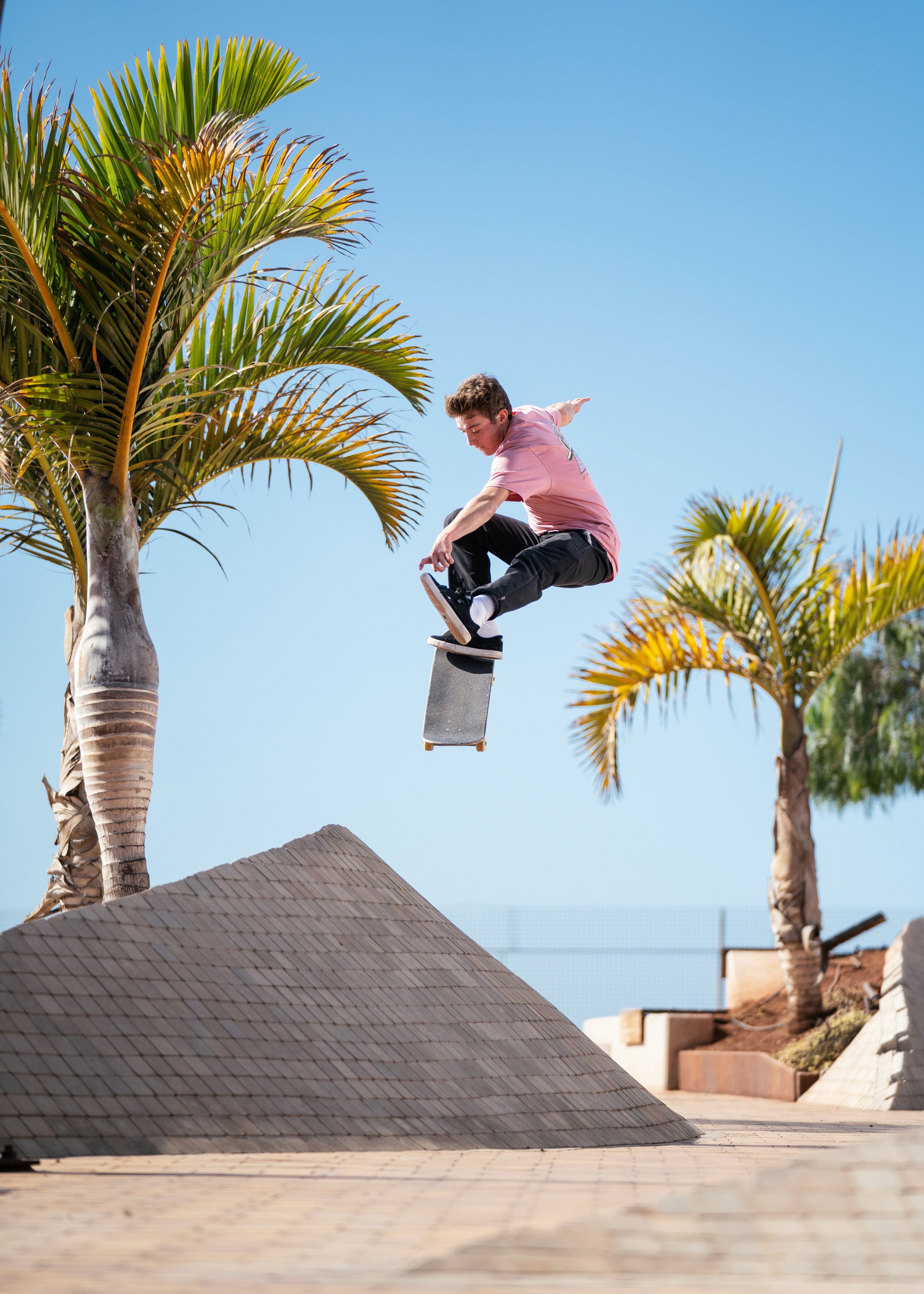 Matt can do banging one-foots although from my footage of this trick you’d never know. I filmed it waaaaay too close but put it in the edit anyway. I think I’d been watching too many Supreme videos. How’s that for filmer honesty? I’m actually stoked on the way that Strobeck changed the way filmers film these days, it was getting stale. Would you rather watch a Russel Houghten rip off video? I wouldn’t. Fat Bill put the cat amongst the pigeons and stopped the Ty Evans train dead in it’s tracks. That reset button needed pushing. 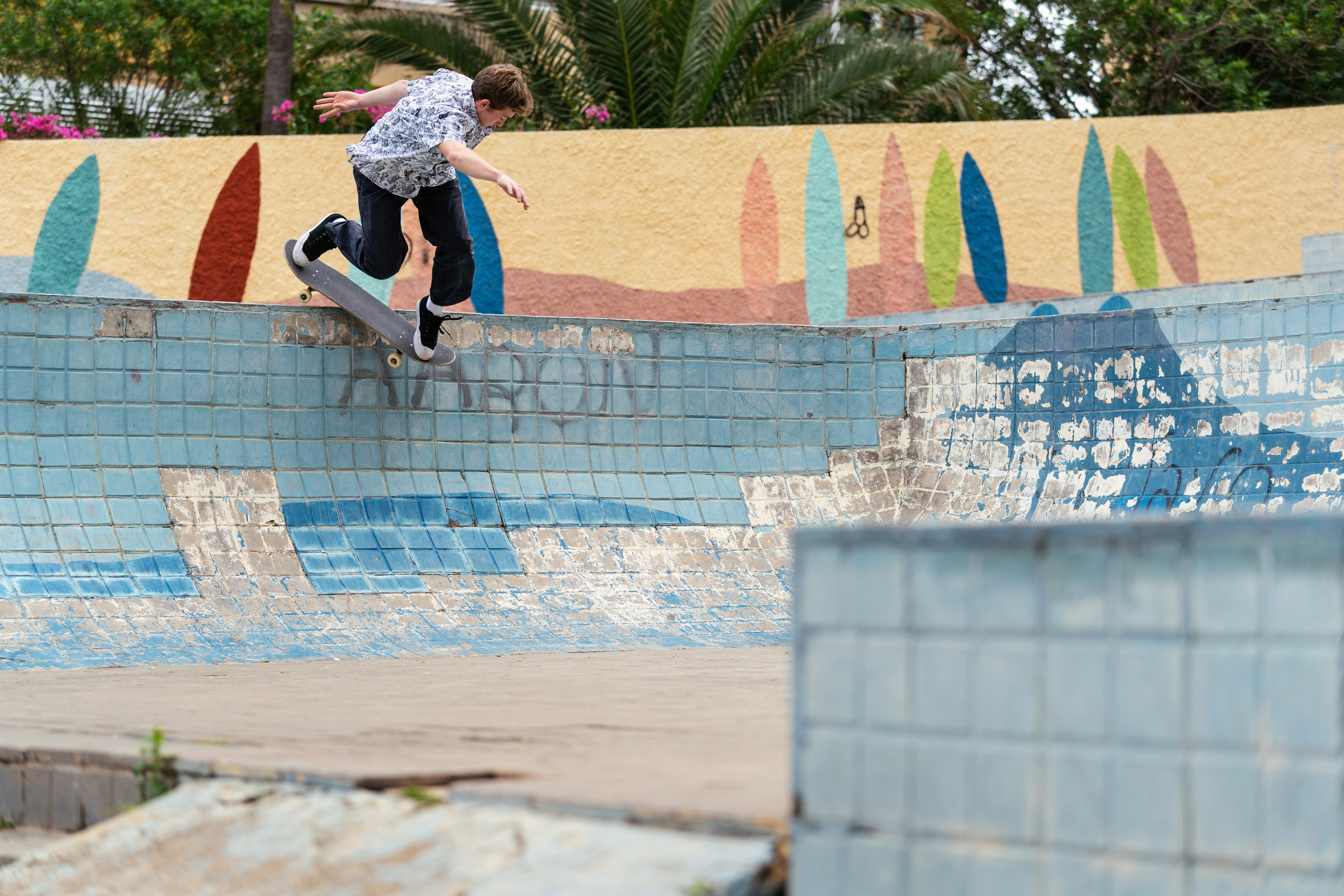 Yeah, it’s just a back lip but the bank is whippy AF and look at the shapes bruh! 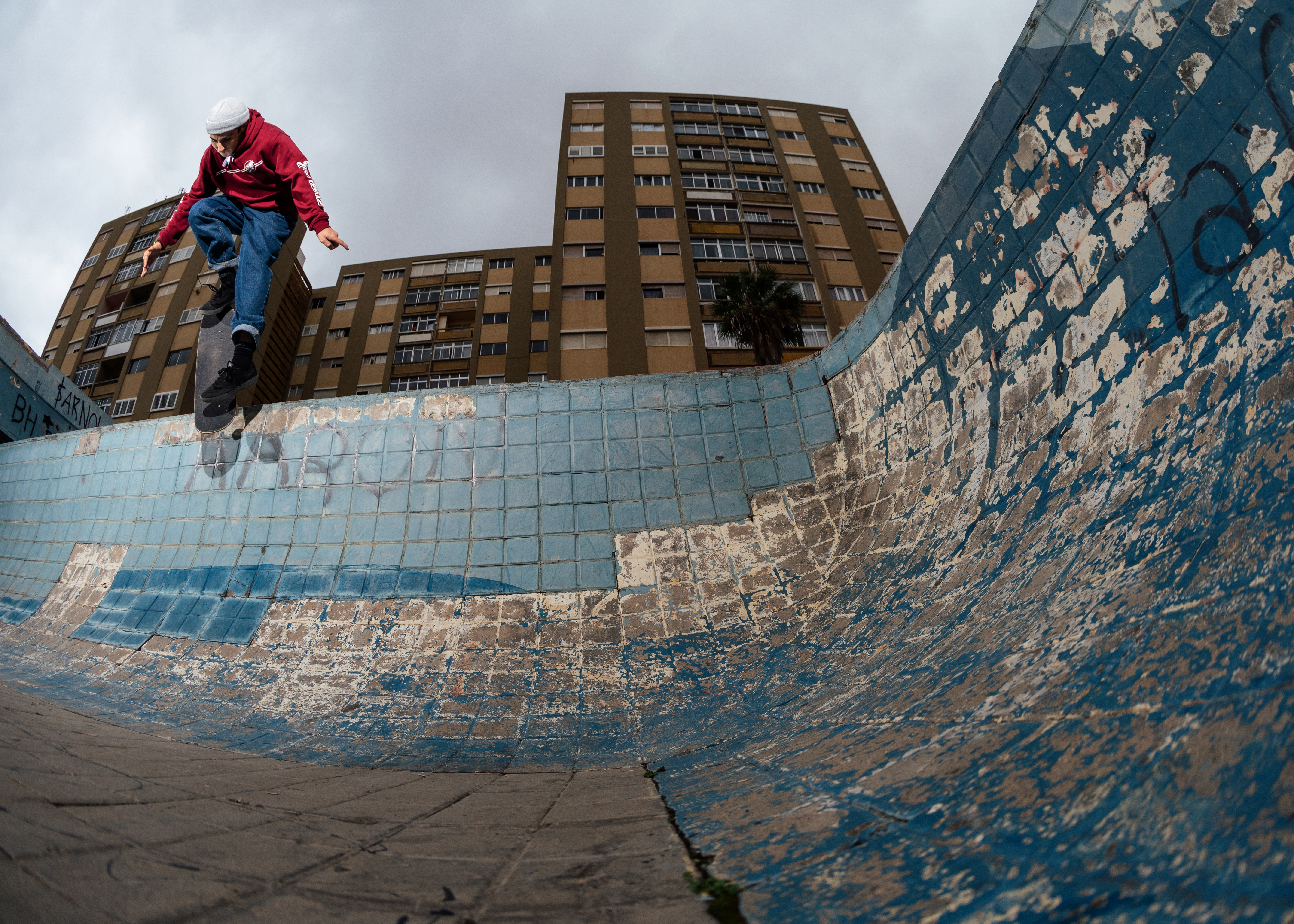 Aaron doing a newest deal over his own name. He flew out there a few weeks before to spray paint it on the spot knowing he would try this trick. If you believe that you’ll believe any old shite. 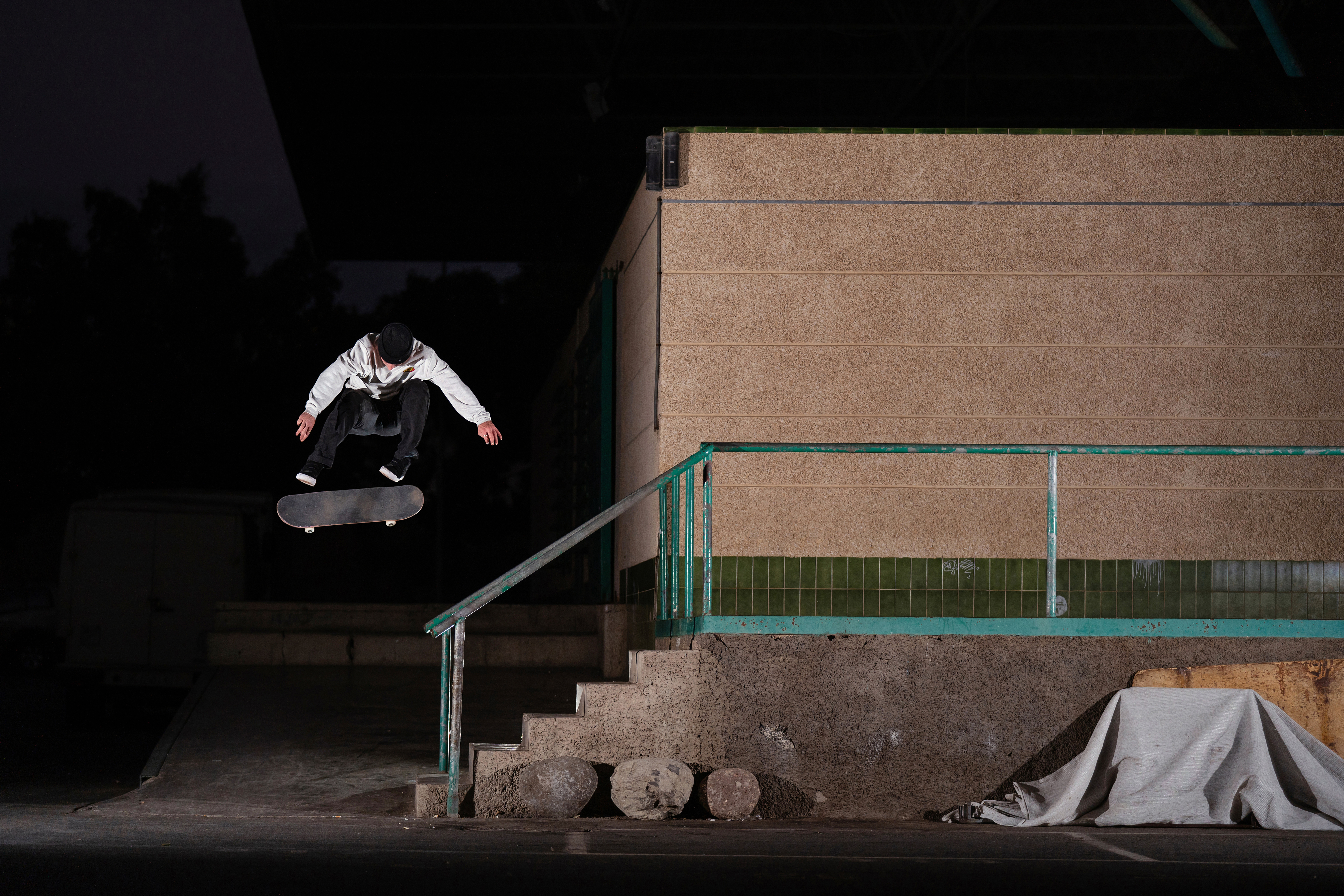 OK, so this took longer than he’d have liked but it was worth it. Especially seeing as this is one of the most bust-free, easily skateable spots on the whole island but we’d been thwarted on our first day thanks to some loc’d-out boy racers chilling on the stairs. My favourite part was after the 50th go (not really) when Cian said “ I CAN do switch flips you know!” which was funny as fuck. If you were there like. 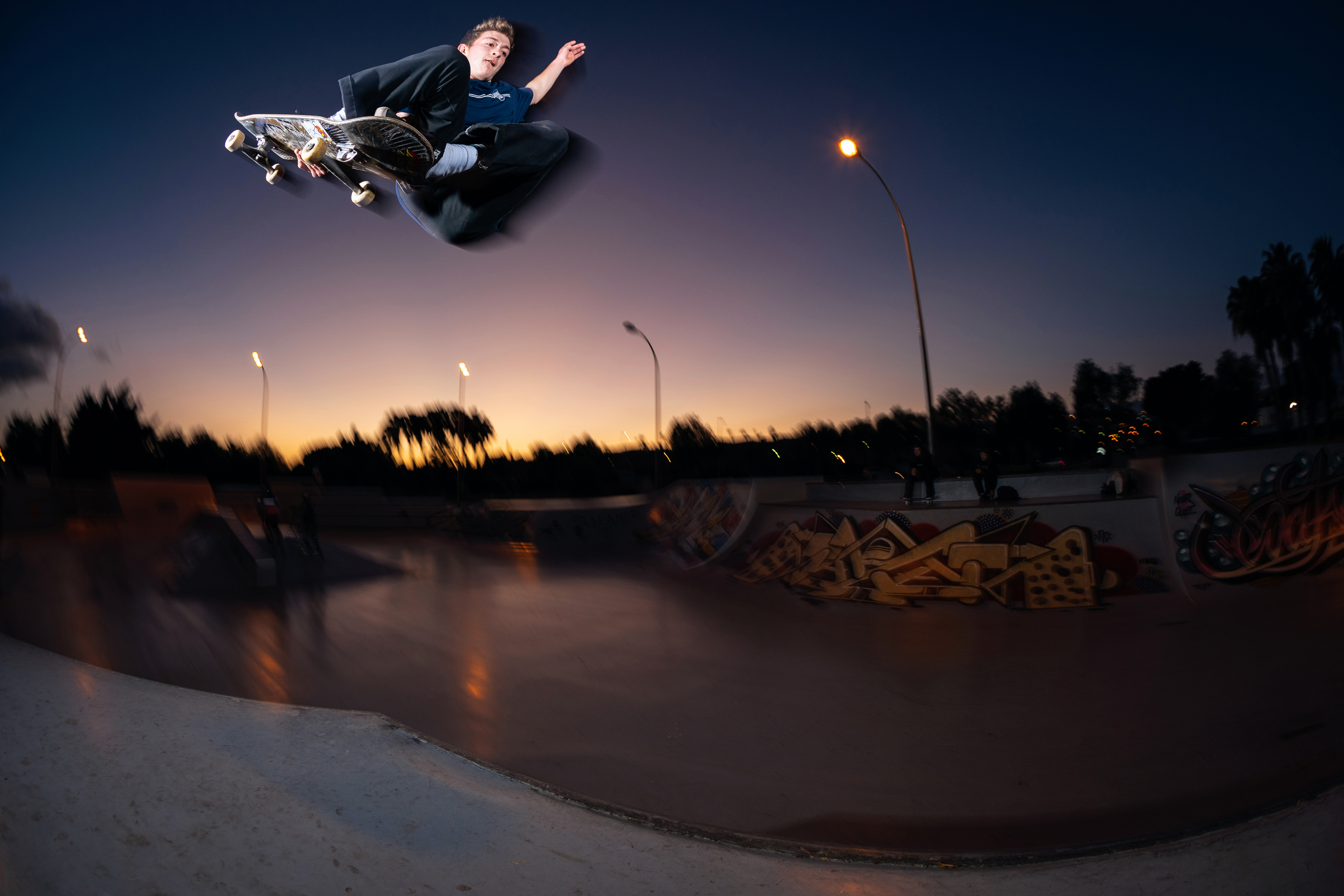 This skatepark has been resurfaced and the coping no longer sticks out. At all. Plus it’s been recently painted so it’s like an ice rink. I recommend that you give it a miss. There’s way better spots on this island. Still, if it’s the end of the day you might as well have at it for a bit. 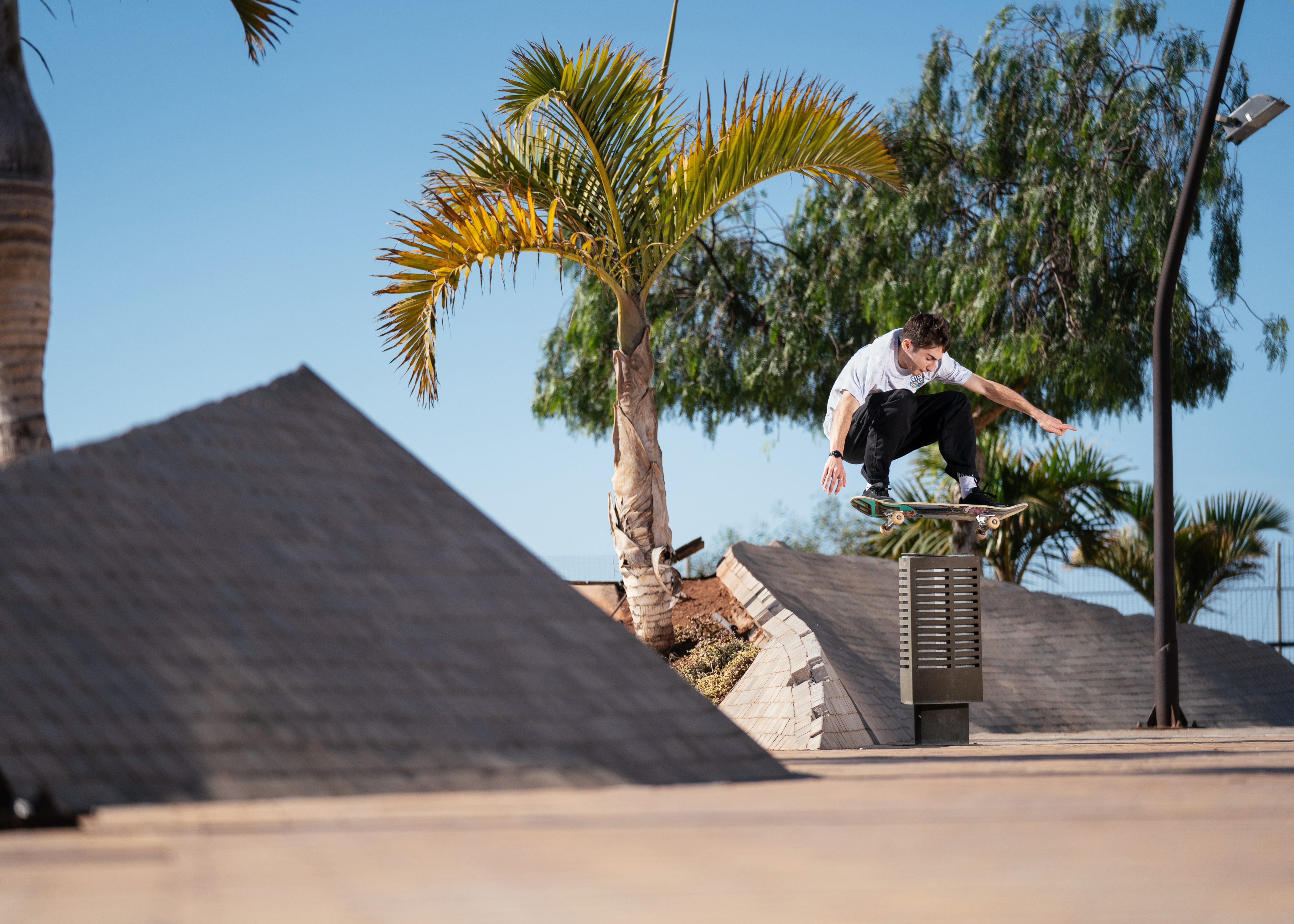 I used the footage of this where Aaron hit the bin. The DONK sound made it more interesting. Any fool can clear an obstacle, it takes character to hit it and keep going. 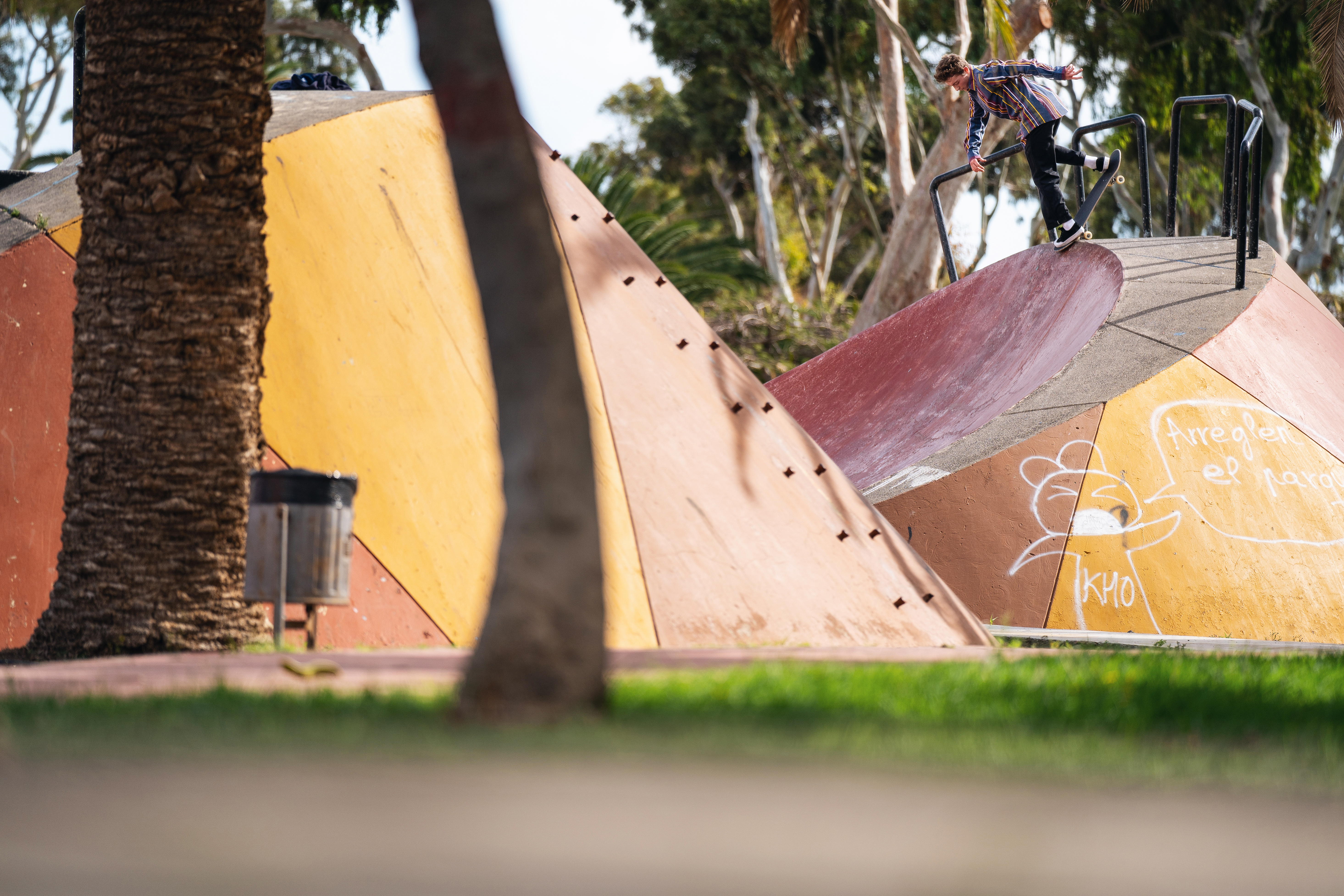 Matt, back nose blunt revert. Well it was reverted for the footage, this photo looks like it was straight back in. Sometimes photographs can lie. 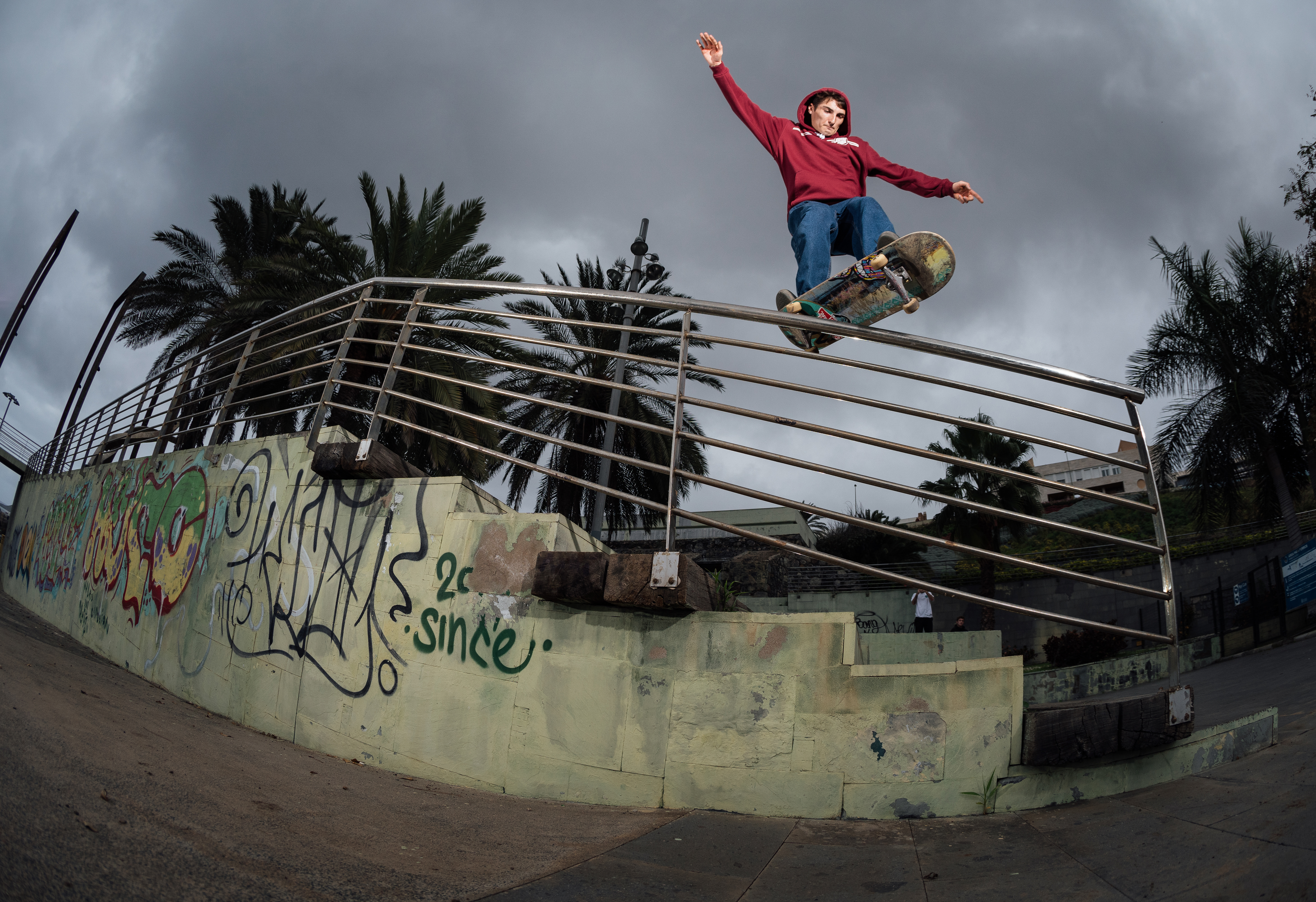 Aaron had to run out of this due to the lack of adequate landing space, I say he ran out: he limped out as he had a dodgy ankle from rolling it on the first day. I nearly had a Connery when he did that and I skated to the garage for ice in record time. Usain Bolt couldn’t have brought it back faster. Team Managers of the world will tell you – you need your head examined if you take less than 3 people on a trip. If one skater gets hurt you need more then one left to skate or the vibes drop to intolerably low levels. 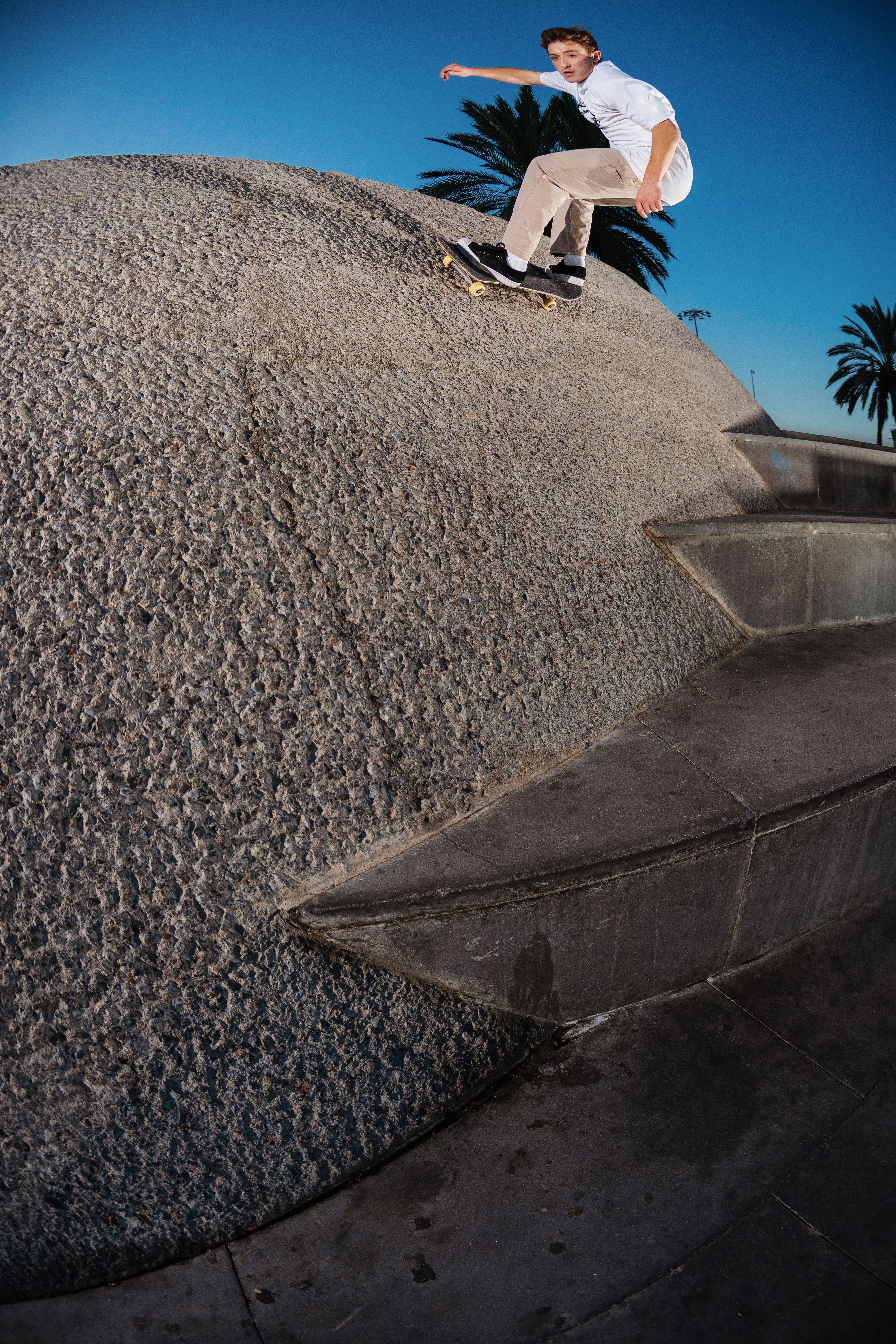 All was going well at this spot until some vigilante Dad came over and said NO! He got straight on his phone and we heard him say police so we fucked it off and went for dinner. This “wall” ride was good though. It’s not a wall ride is it? Mags and Insta accounts take note: If the “wall” is anything less than 90 degrees it’s not a wall so don’t call it one. See: frontside indy and photos of stinkbugs. OK boomer, shut up. 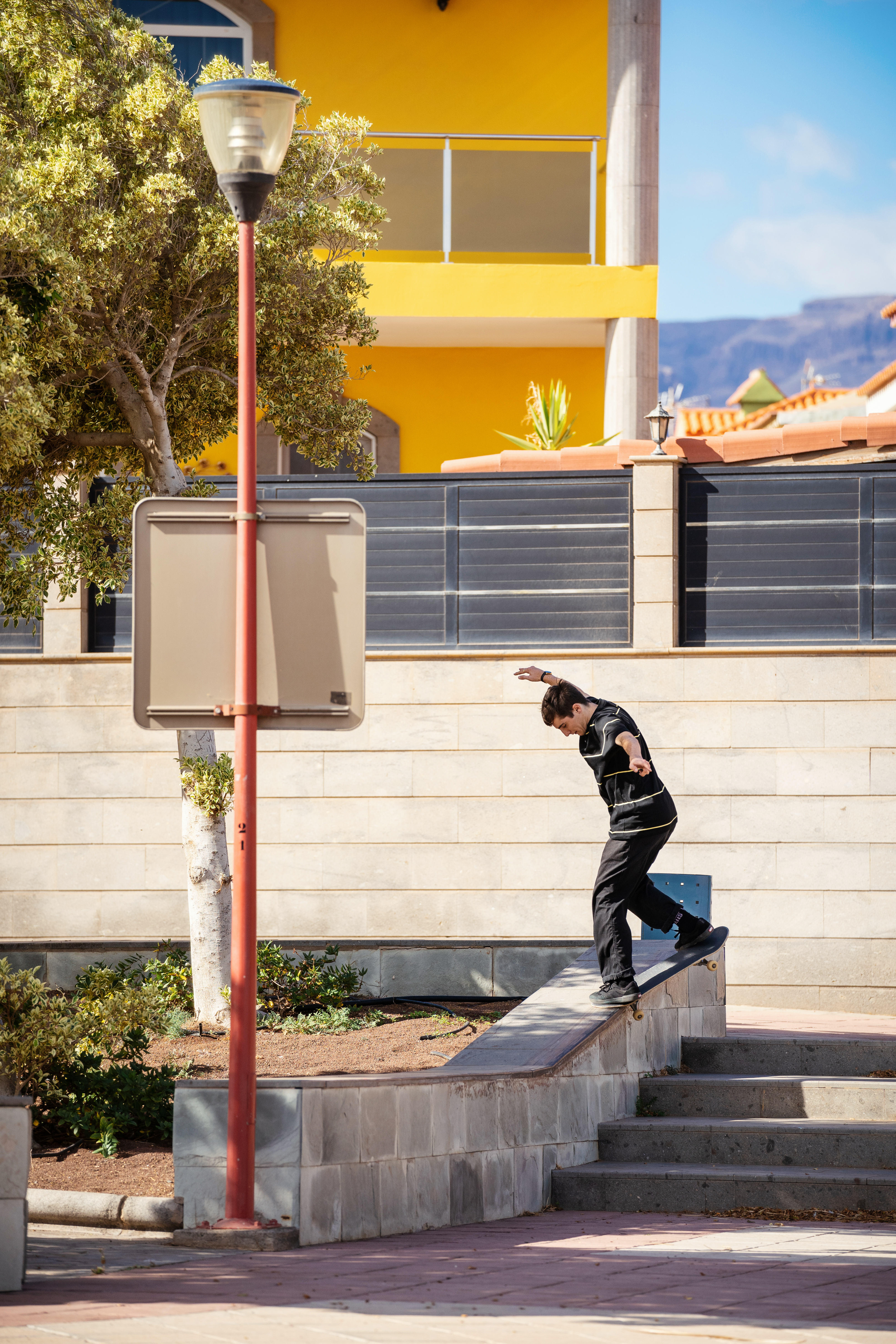 Aaron hit my camera on this one whilst we were filming it. I pretended not to be bummed but I was livid. Have you any idea how much I paid for that lens? Actually I didn’t pay anything, it belongs to my employers so I’m easy. The only cameras I own these days are VX’s, mostly for sentimental value but I break ‘em out every once in a while, for special occasions. Anyway, he did it to fakie first but wanted the pop-out version. Cheers to Brian Wenning for making the mid-ledge pop out a thing. Does Aaron refer to Wenning in his skating? Does he remember him? I dunno, ask Aaron. Maybe after the apocalypse eh? Social distancing.

Filmed and Edited by: Alan Glass 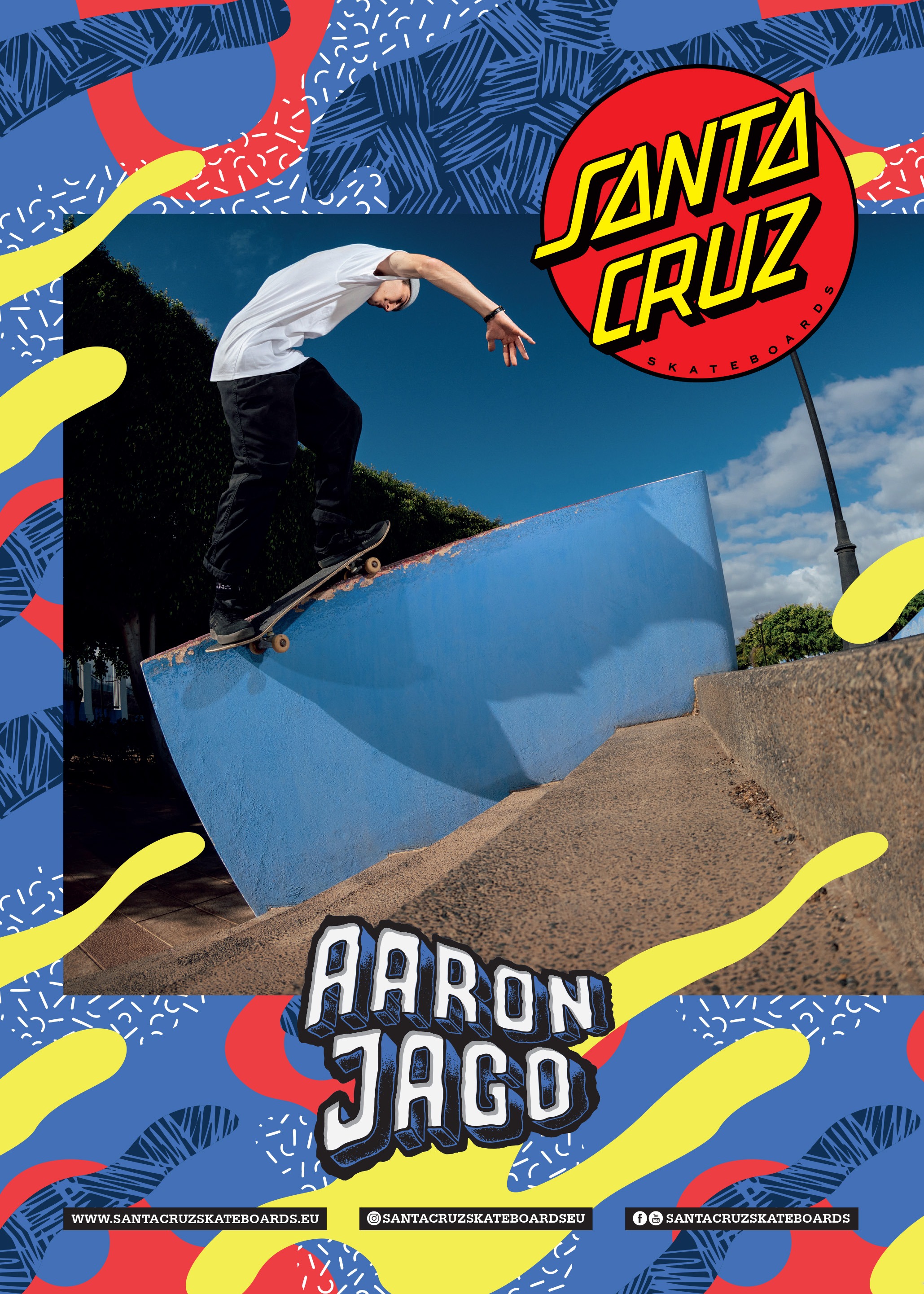 Sox and Pully rip the Shiner TF a new one.