After posting up a raw Insta minute of PJ Chapuis (watch it here) we thought it would be nice to upload this productivity machine’s Issue 24 interview to the web. Get reading below and rewatch Rave’s ‘FOUND FOOTAGE’ edit here. If you’re still yet to own Issue 24 in physical form you can get it here alongside other back issues of Vague. 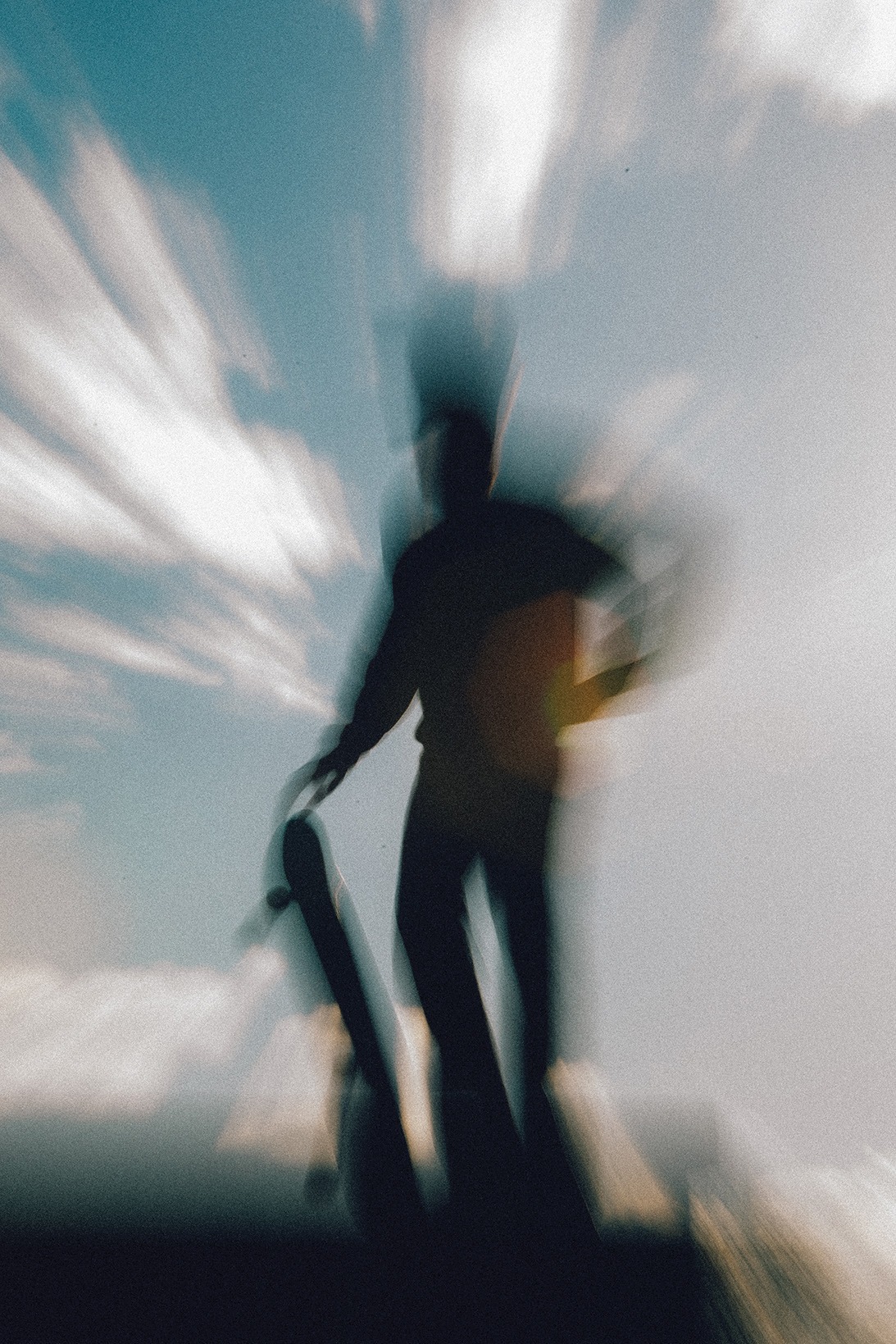 I’m very, very hyped to get Peej on these pages. Despite filming all the time, working full time for RAVE Skateboards and seemingly being in three cities at once, his output is always on point. Trick and spot selection as well as execution would have been enough to impress us alone, but on top of the myriad of other things he does it’s even more impressive. I wasted a PJ Harvey related question so imagine I had made one, then imagine the answer and slot it in wherever you like over the next few pages. Oh, and he’s filming a part for us as well because he’s a nuttah! PJ I have no idea where you find the time, but we appreciate it a fuck load! 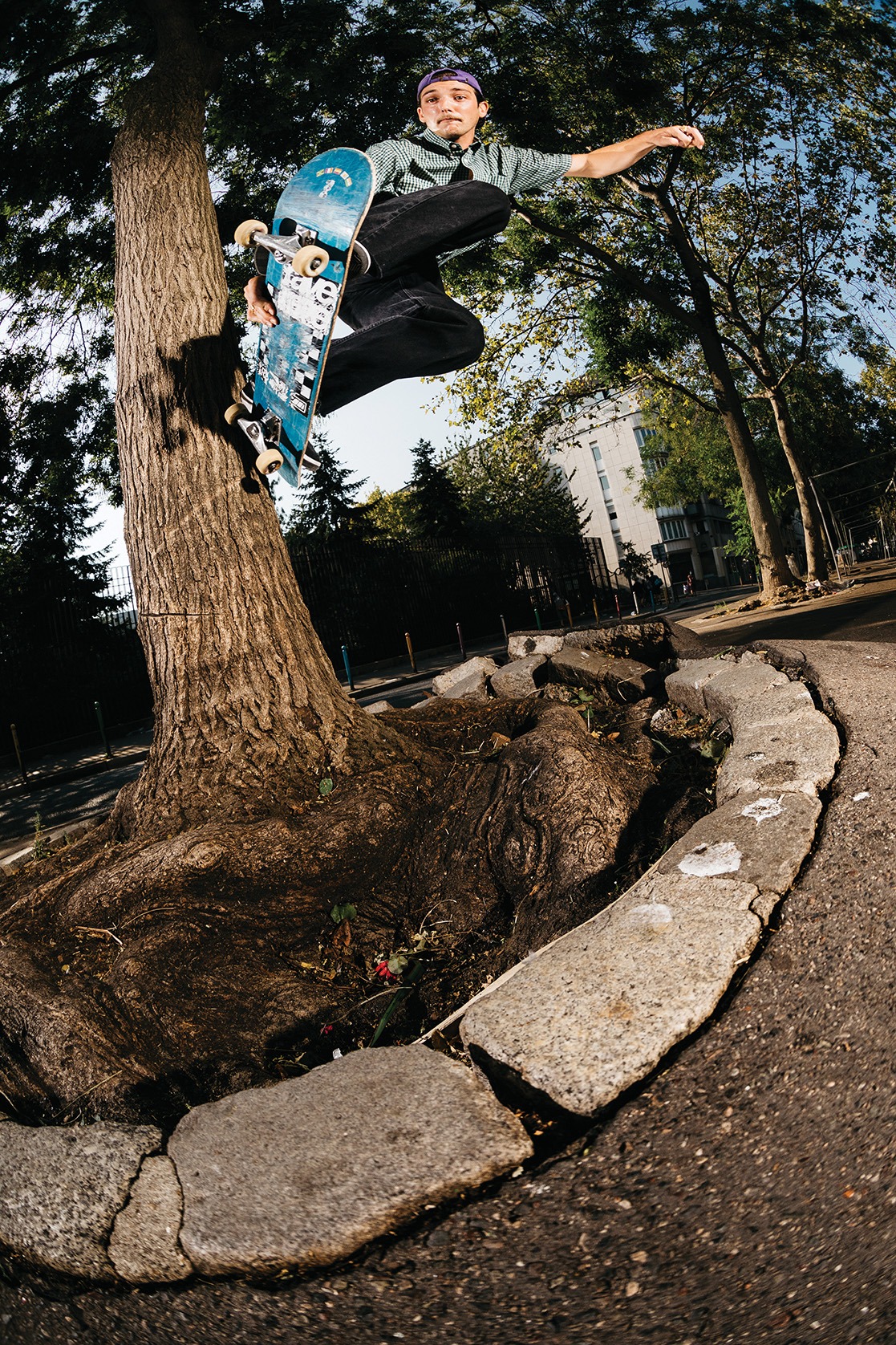 Hi PJ! Thanks so much for doing this, what are you up to right now?

Hello there, it’s a pleasure doing this interview with you guys !

Well, right now to be full honest I’m trying to solve a long time shoulder issue that I can’t seem to get over with…. I do some false moves with my arms that makes me feel like I kinda twist my shoulder but it pops back in straight away and just hurts a lot for a couple of days.  Guess I’m gonna need to work out a bit!

Is Rave your full time gig at the moment?

Yep, operating full time on it, maybe too much time haha. We are three people total on the project, all involved full time on it, it’s the only way to make it grow and get things going properly.

It seems like the brand is going in! The clothing is banging and it seems you’re doing lots within each line, are you involved in the clothing production and graphic design side?

Thanks a lot! We’re pretty happy on how things turned out during the past 5 years, how the collections and the team have evolved.  The three of us  running the brand each have our own particular roles but make decisions together. Aurelien is the guy in charge of designs but we all bring ideas or inspirations and we all validate all the graphics together. I’m more like the team manager / filmer guy, which allows me a lot of time to go skate. 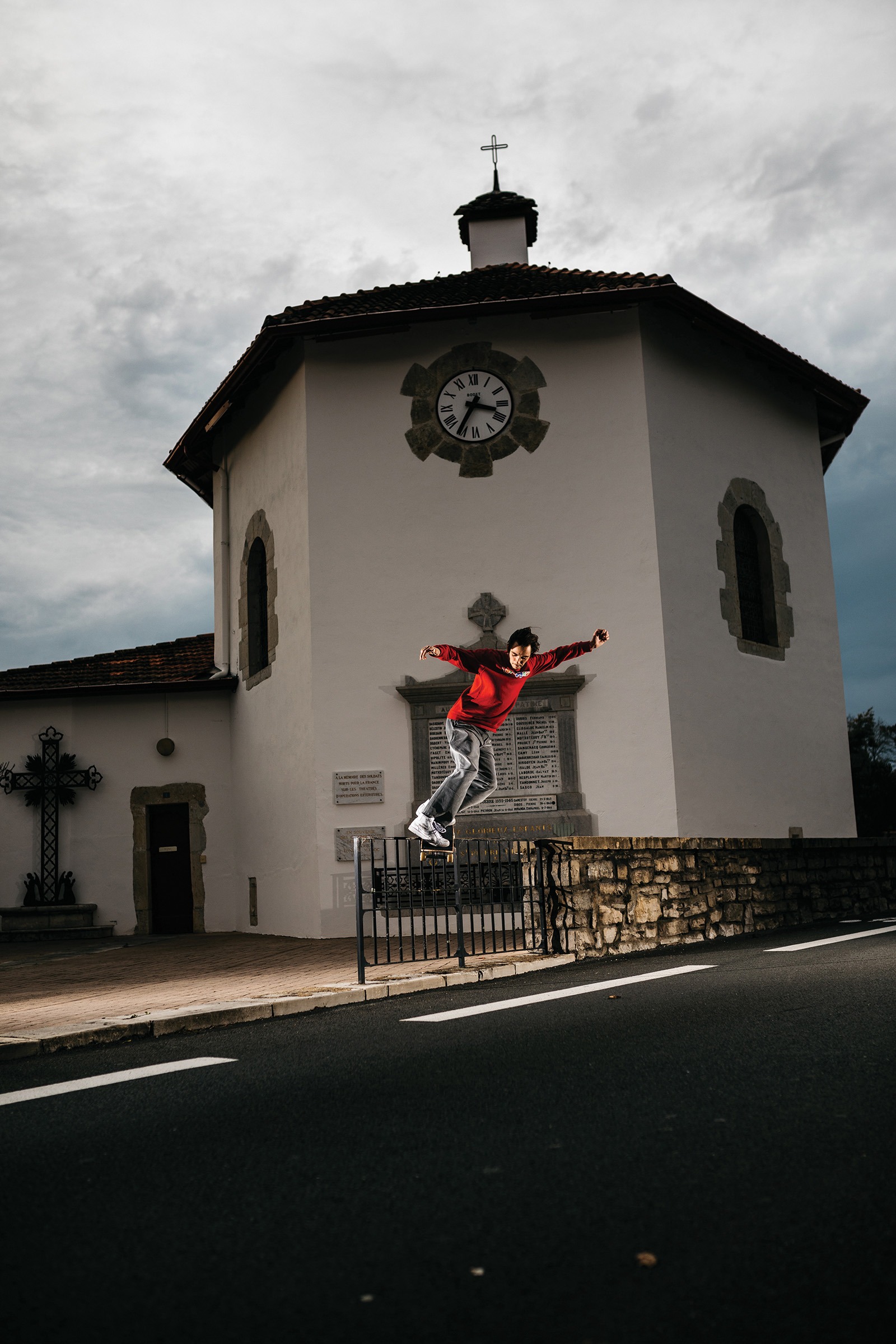 I like the way that you back up all of the product releases with lots of visual stimulus! Be it photos or videos the output is vast! How important do you feel that the company releases content to back up the products?

We try to stay active and regularly have an edit to release or an event to make… It’s important to have regular content I think. Last year we released a lot of projects, between Amelien’s introducing edit, a Thrasher part for Alexou (Alex Richard) and Zen, Lucien’s part on Grey or the promo edit with the whole team. It was pretty busy and took me a lot of time and energy to focus on the releases. This year we are more focused on stacking footages for a future long project. Something like Family & Friends, maybe the second opus!

On the subject of Rave’s have you been to many and if so do you have any stories about them?

Haha, classic one. Been going to raves but I’m a bit older now and realized I had to slow down on the parties to keep skating as much as I want haha. Also, over time I got other stuff, making me active during the day rather than during the night. But from time to time you know…. Haha

You’ve travelled around a lot in your time but seem to spend your time between Paris and Biarritz. Do you find this provides a good balance? And do you associate one city more with work and the other more with relaxing?

Yeah I left Bordeaux during the first lockdown and went to live in my girlfriend’s flat in Biarritz. I got to discover the place and I really liked hanging there. I met a lot of really cool people as well, started to surf and really loved it haha.  I wanted to move to Paris and coincidentally my girlfriend got a job offer there so we decided to make the move and live partly between Biarritz and Paris. I’m happy with this move. It’s tiring to always be on the train but I think it really provides me with the right balance. I get tired of big cities pretty quick so Biarritz let’s me relax when I want some fresh air. 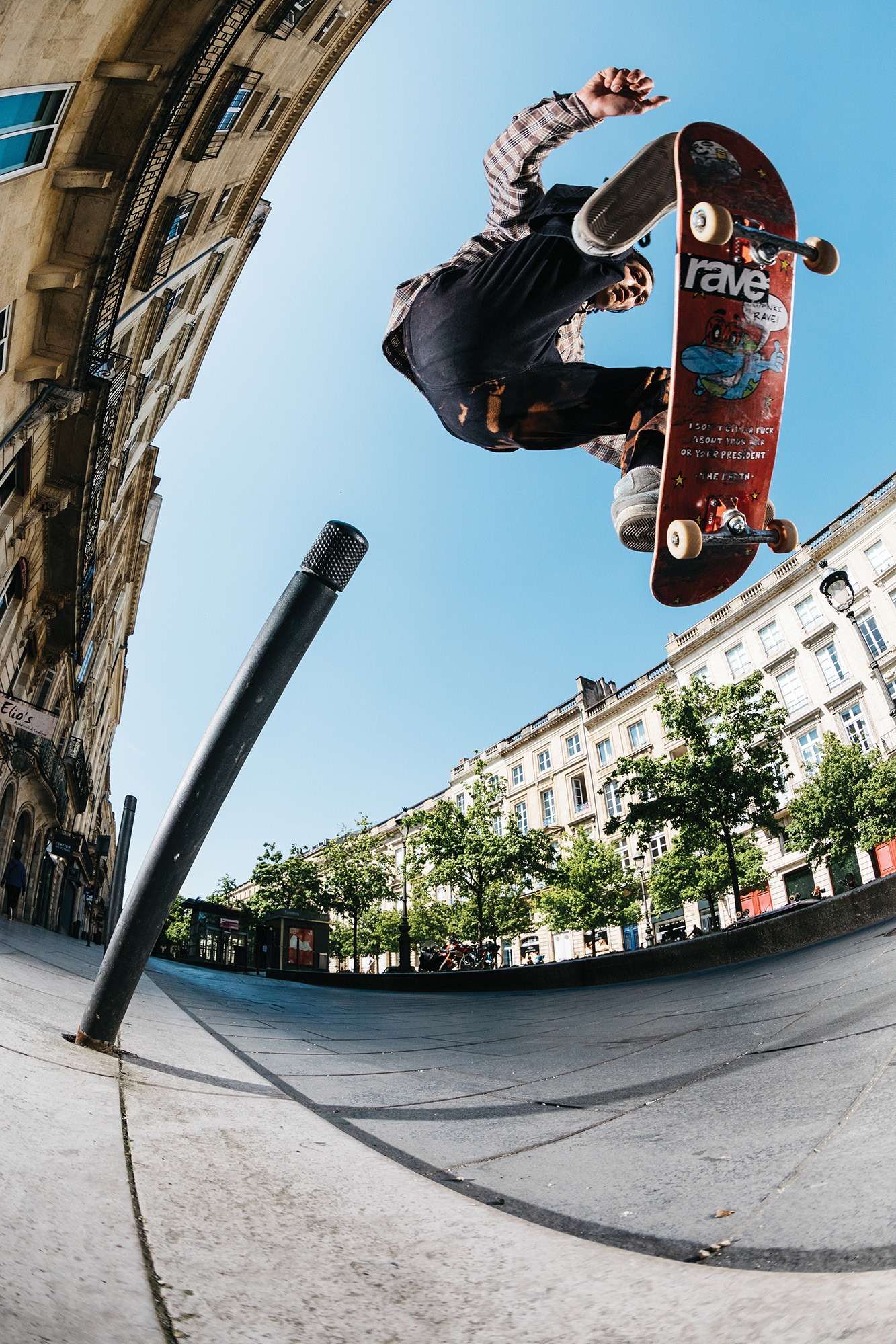 Having lived in so many places do you have desires to settle or do you get the urge to bop around? One thing must have been seeing a lot of hometown hero’s, are there any you’d like to big up?

I think about it sometimes and yeah it could be cool to settle a bit, but not yet haha. Maybe in a couple of years but right now, I need the energy of the city and to keep moving around. Plus, we have guys in Bordeaux, some in Paris, some in Annecy and Lyon, Mika is now living in Lisboa so I need to move around to film with them. All this leaves me no time to get bored. Shout out to my boys on the Rave team. They are my hometown heroes.

Are there any places that you’ve visited that particularly stand out and any stories from on the road?

I traveled a lot when I was younger, with my parents, lived in Syria, in Scotland and in the US, but I really grew up, I mean the fun part of growing up, in France. I like moving around but I enjoy going back to France haha

You’re extremely productive but seem to take on a lot, any good relaxation tips or do you fear doing nothing?

Haha that’s a good question. The quest to relaxation is very long haha. Being in Biarritz makes me release the pressure. It’s a bit cheesy to say but it’s good to breathe some fresh air. Since we moved to the Basque Country I realise that I need to go out more, go hiking, go in the water or in the mountains. Surfing got me into new feelings, it’s hard and tiring but when you go out of the water your body feels so good, you feel clean and so relaxed. 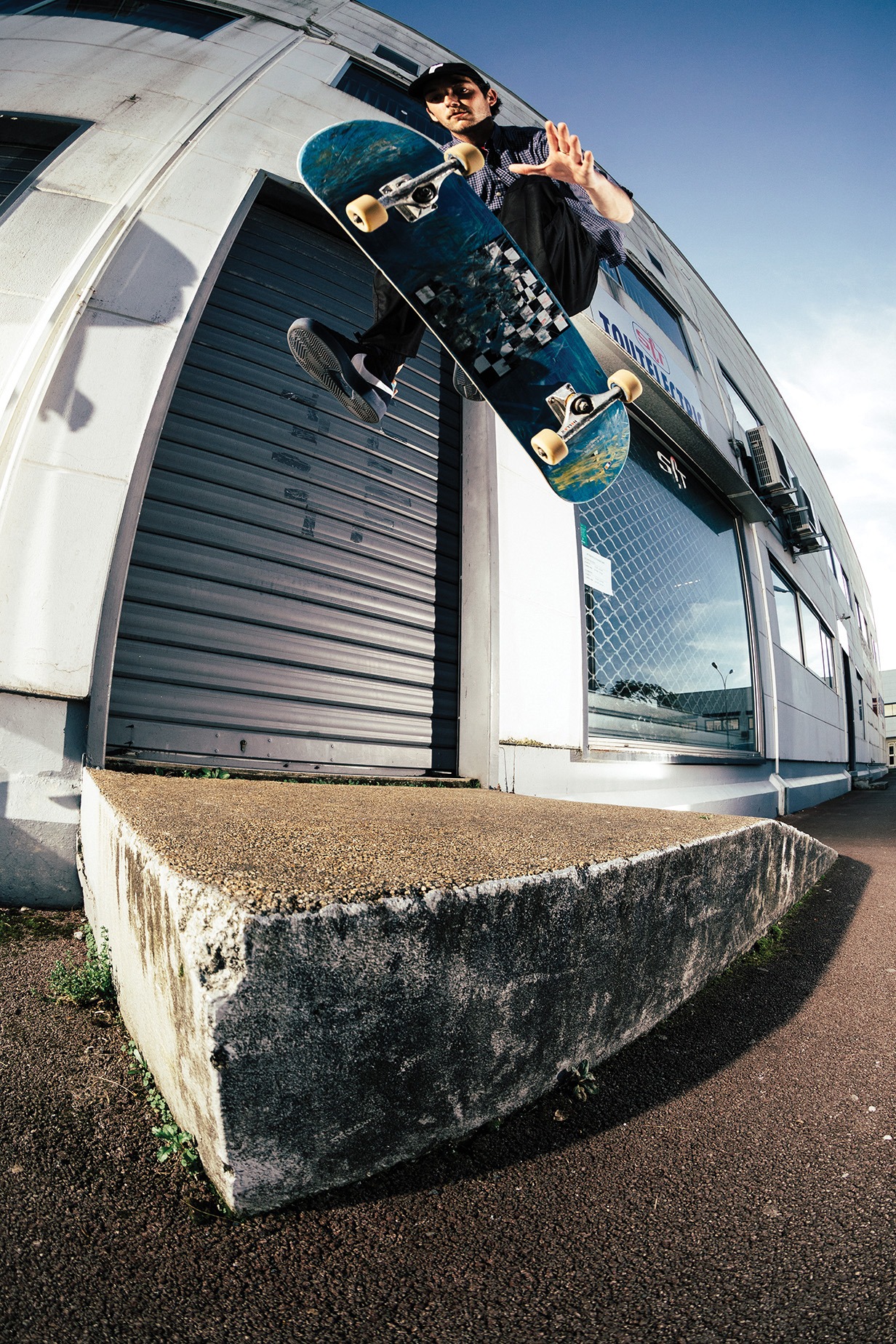 Favourite moustache out of people you know and celebrities?

Richard Burke (Tom Selleck) in Friends or Alex Richard’s when he does it big.

We’re big fans of your skating, blending more recognisable tricks with more creative numbers, when was the last time you did a polejam to nose grab 5-0 180 out and what do you feel the wackiest and proudest trick you’ve done to date is?

Thanks, I really appreciate it. I try to do my shit and to make it reflect how I see skateboarding.

I focus more on things that make me feel good now and less on how big the spot can be.

I’m pretty happy on a crack nollie Hippie Jump I did in Copenhagen that will be in the part for you guys!

Myself and a few of my friends were dead against surfing more through ‘shaka bro’ 80’s film propaganda more than anything I guess but recently, those friends have got really into it making me rethink my stance. Am I right in saying you’ve just started and how would you persuade the ignorant folk who dislike it for absolutely no reason. Also which character in Point Break can you most relate to?

Surfers are the worst so I totally get you! The only good thing about surfing is to do it. It’s funny that you talk about Point Break, I watched both Point Break movies recently, like last month, and it really felt good haha. It’s really the surfing « Fast & Furious » without Vin Diesel. Hard job to choose a character though…. I would say Johnny Utah even if I hate how he snitched on the « Ex Presidents » haha. 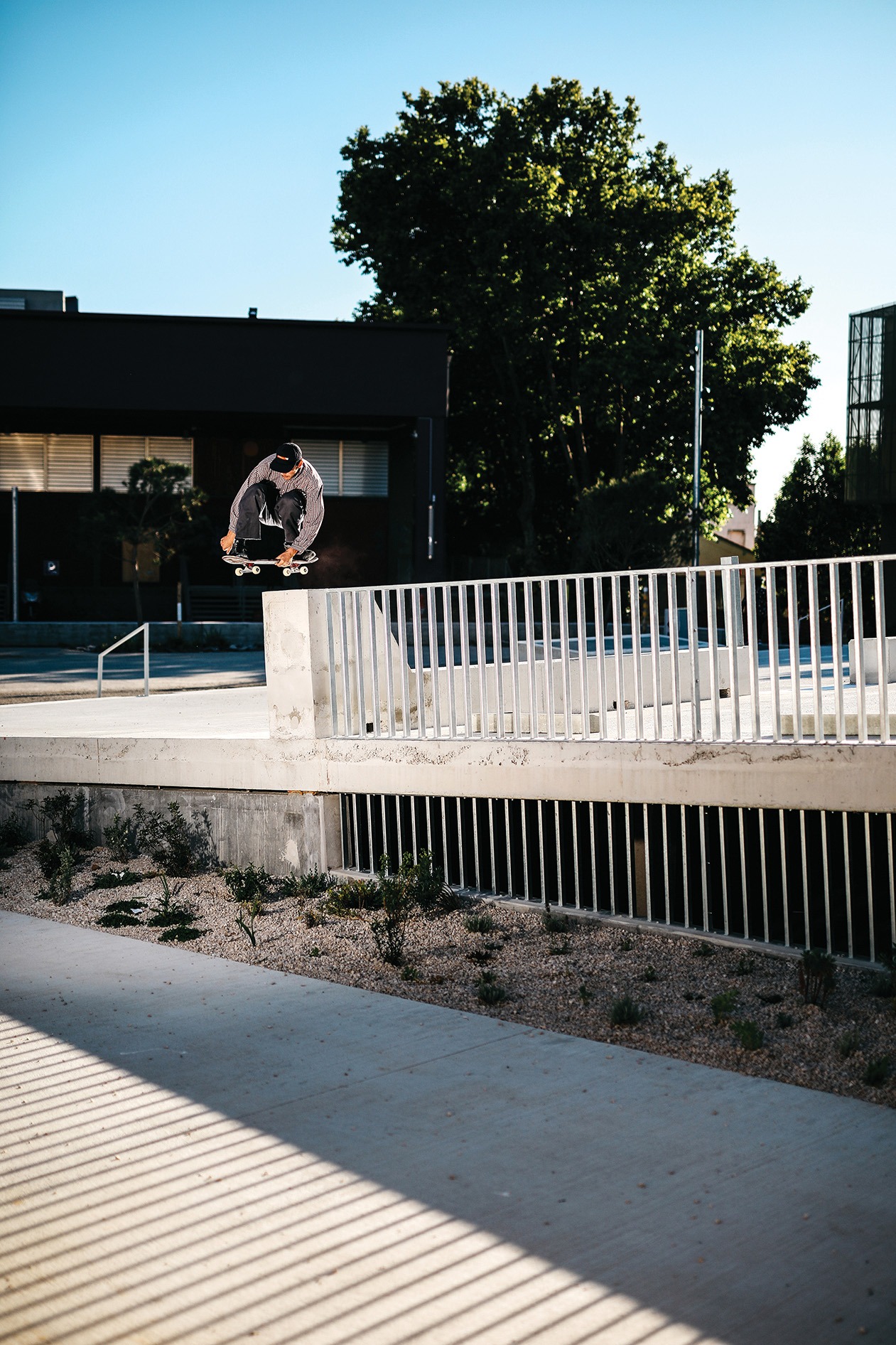 You also snowboard don’t you, if skateboarding, snowboarding and surfing were different sandwiches what kind of sandwich would each activity be?

I used to snowboard when I was younger but I stopped because I was a lot more into skateboarding. Also because I could get hurt a lot and I really did not want that. Growing up in the south west of France, snowboarding was something pretty big around here and a lot of my friends were into it. So it has always been a major inspiration for me. The spots they ride, the videos they make… I fully respect the dedication of the guys doing it, they are so creative and I really admire that they can spend hours just shaping a spot in the streets. Sandwich wise, I would say surfing is avocado toast, skateboarding is a pita gyros but a good one and snowboarding is Raclette hamburger.

Could you please recommend our darling readers absolutely anything, be it music, film, something to do or meal? 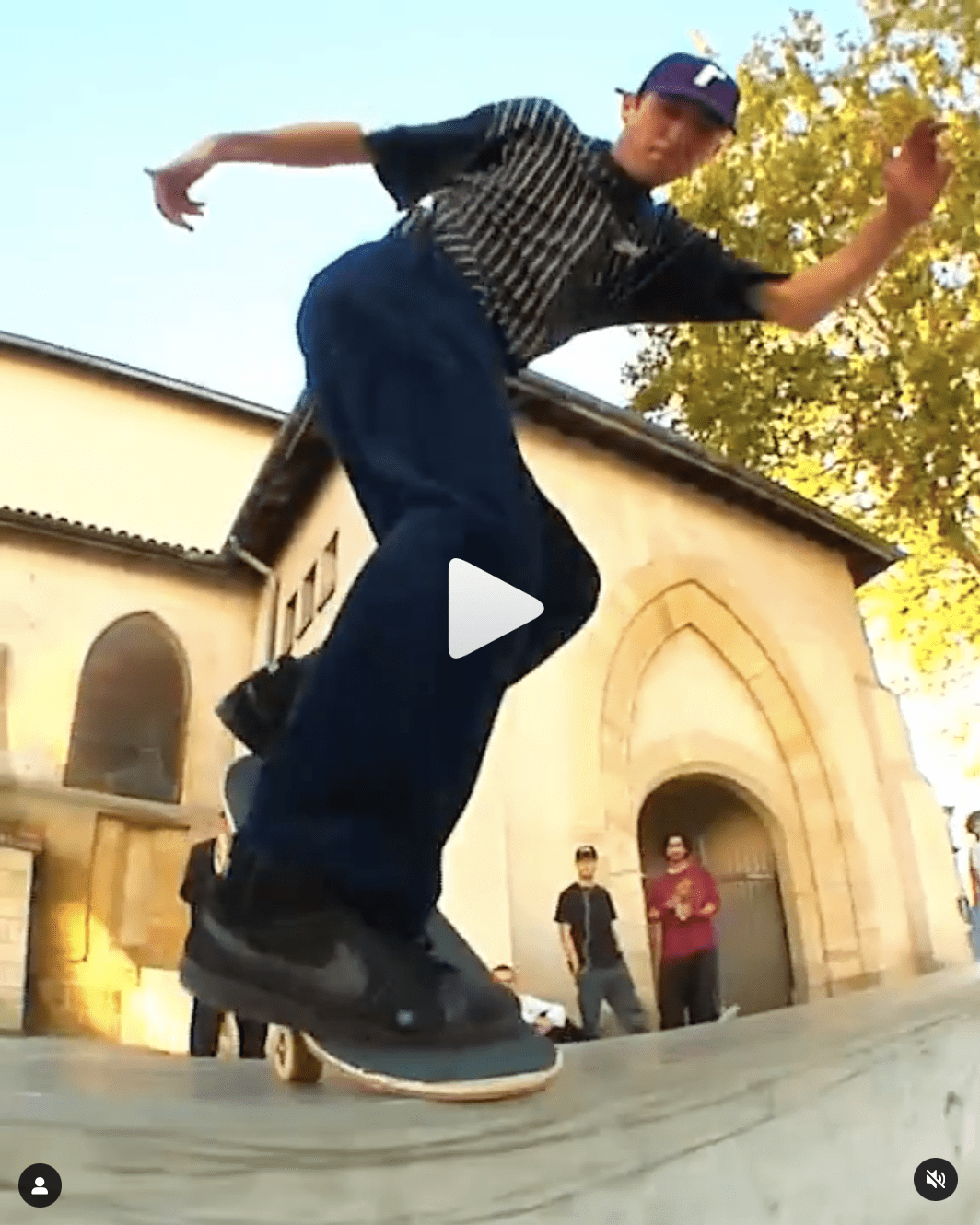