After recently witnessing Nick Jensen’s ever productive activity with his exhibition show at Frestonian Gallery, Isle Skateboards x Nike SB collab video and interview and Nick talking to The Ben Raemers Foundation for his SmiLe Interview, we thought we’d add to his productivity scale even further by uploading his interview from Issue 10 of the mag (still a few copies available here). Enjoy the extended Jendog interview below! 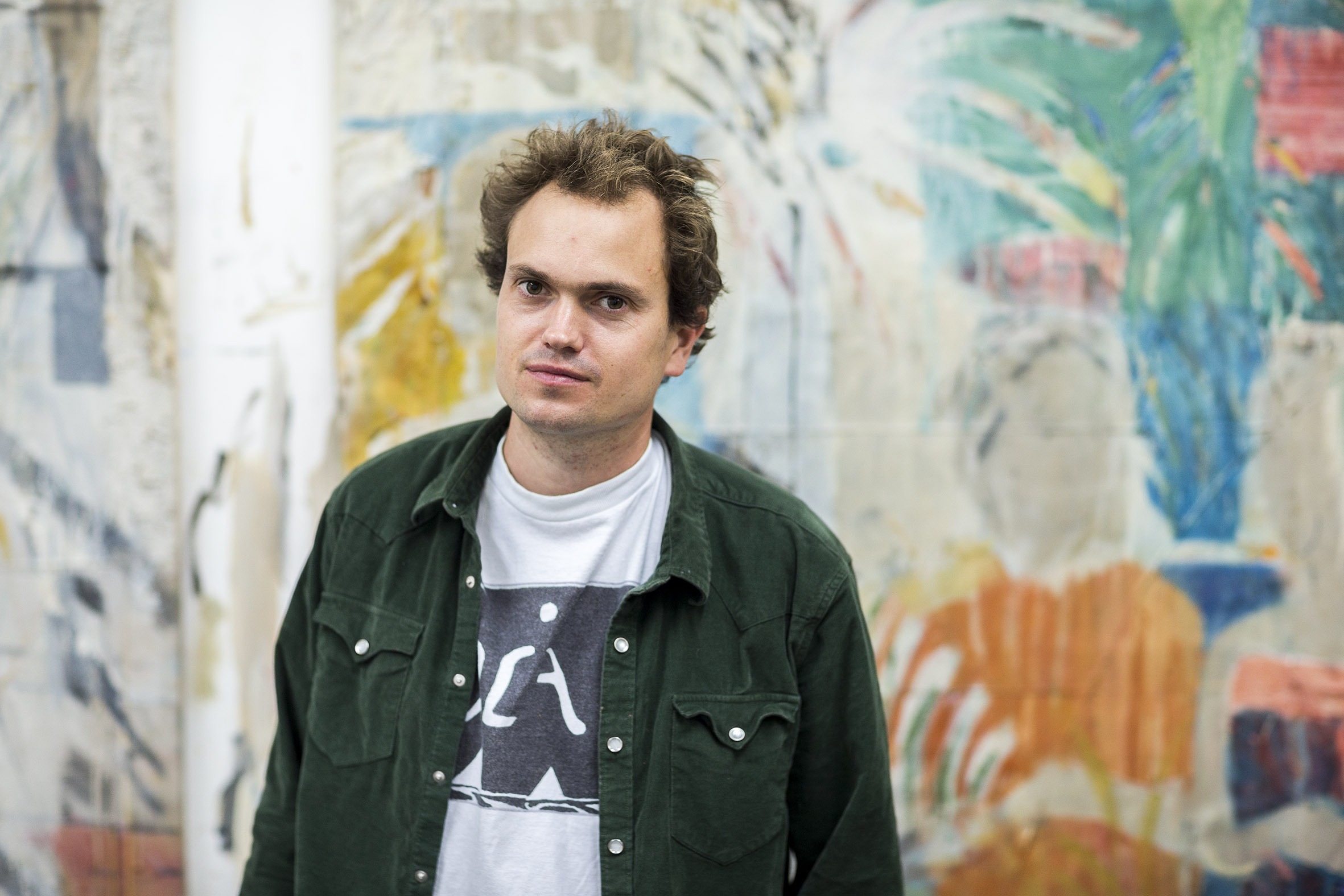 For anyone whose skate knowledge is worth their salt, they’ll know how much of a significant character Nick Jensen is, not just in the UK scene but globally acknowledged and loved. Now co-owner of Isle Skateboards, fabulous artist and still an absolutely incredible shred sticker the man has only upped our appreciation of him. Nick’s eye for things is transparent in his work, skating and presumably day to day life (I bet he changes his kids nappies with the utmost of piz-azz) and we’re honoured to showcase the man’s talent on our fair pages. Thanks again Nick. 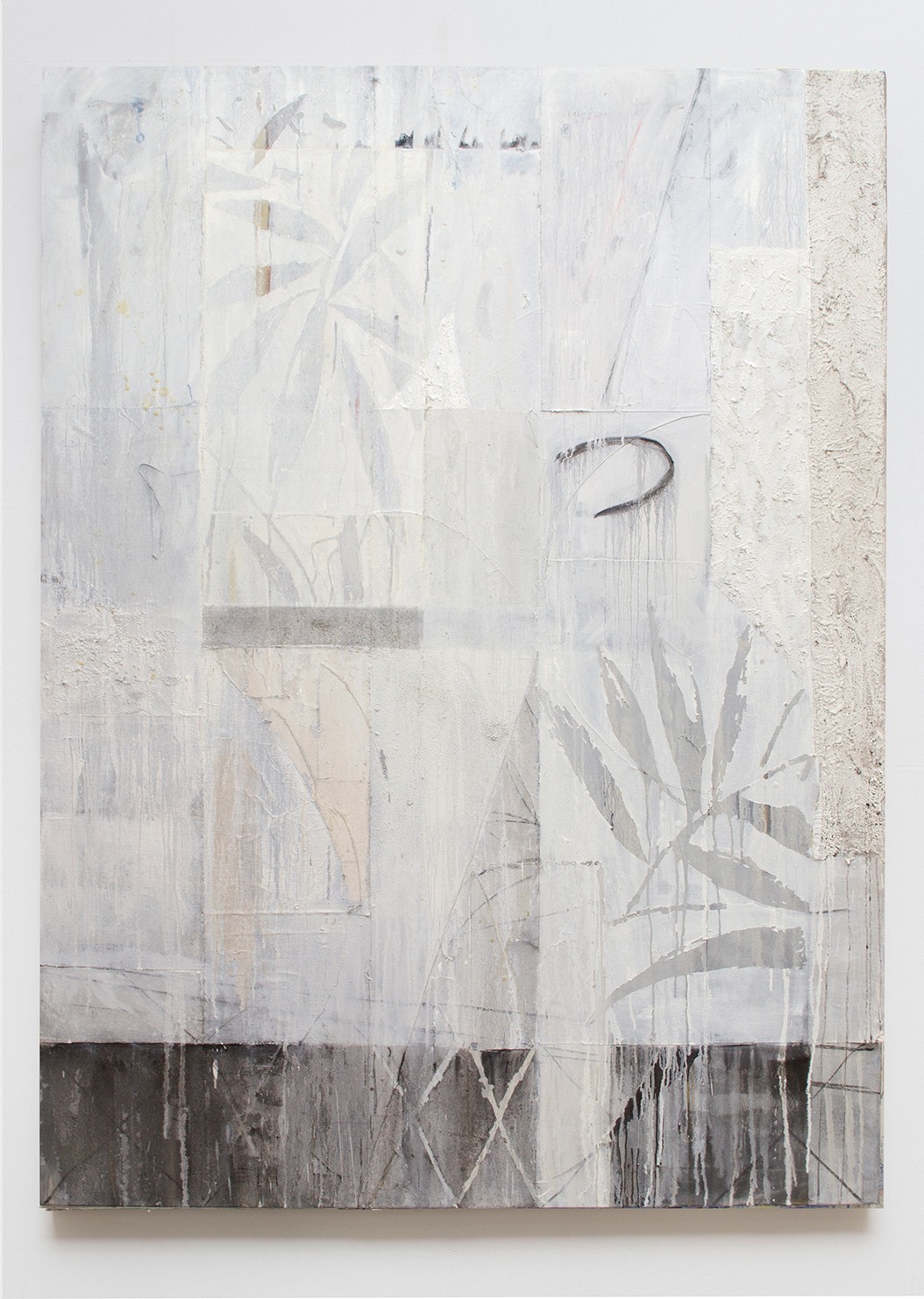 Yes Nick, how’s it going? What are you up to right now?

I am in my studio listening to Neil Diamond (laughs).

Thanks again for doing this, could you please tell me how many people know your name is Simon (my brother uses his middle name as a choice first name also), is Nick your Bowie stage name equivalent to exceed further in the art world?

(Laughs) no man I wish. I also have a career in America and this is how I manage it. Just kidding. My mum and dad changed their mind after my passport was made when I was a baby.

Going back, you were formally trained in the old brush stroking, do you think you benefited from this route and what are your current thoughts on creativity through education and taking this path to pursue art?

Really good question. Art school gave you brush stroke training. Basically the one I went to just said painting is kinda dead and so we should pick up a video camera. It’s weird how much an art school is based on the group of teachers and their own beliefs. None of my tutors painted, so how can you really have a critical eye and understanding if you don’t actually do it. However this makes you really fight for it, and pursue it no matter what. Eventually I met more friends that felt the same way and so I just aligned myself with these people who were so much more enthusiastic. Painting has come back into trend now. Especially figurative painting. If ever I learned a lesson, it’s that fashions swing roughly every 5 years, so stick to your guns and don’t be too swayed by the hype. 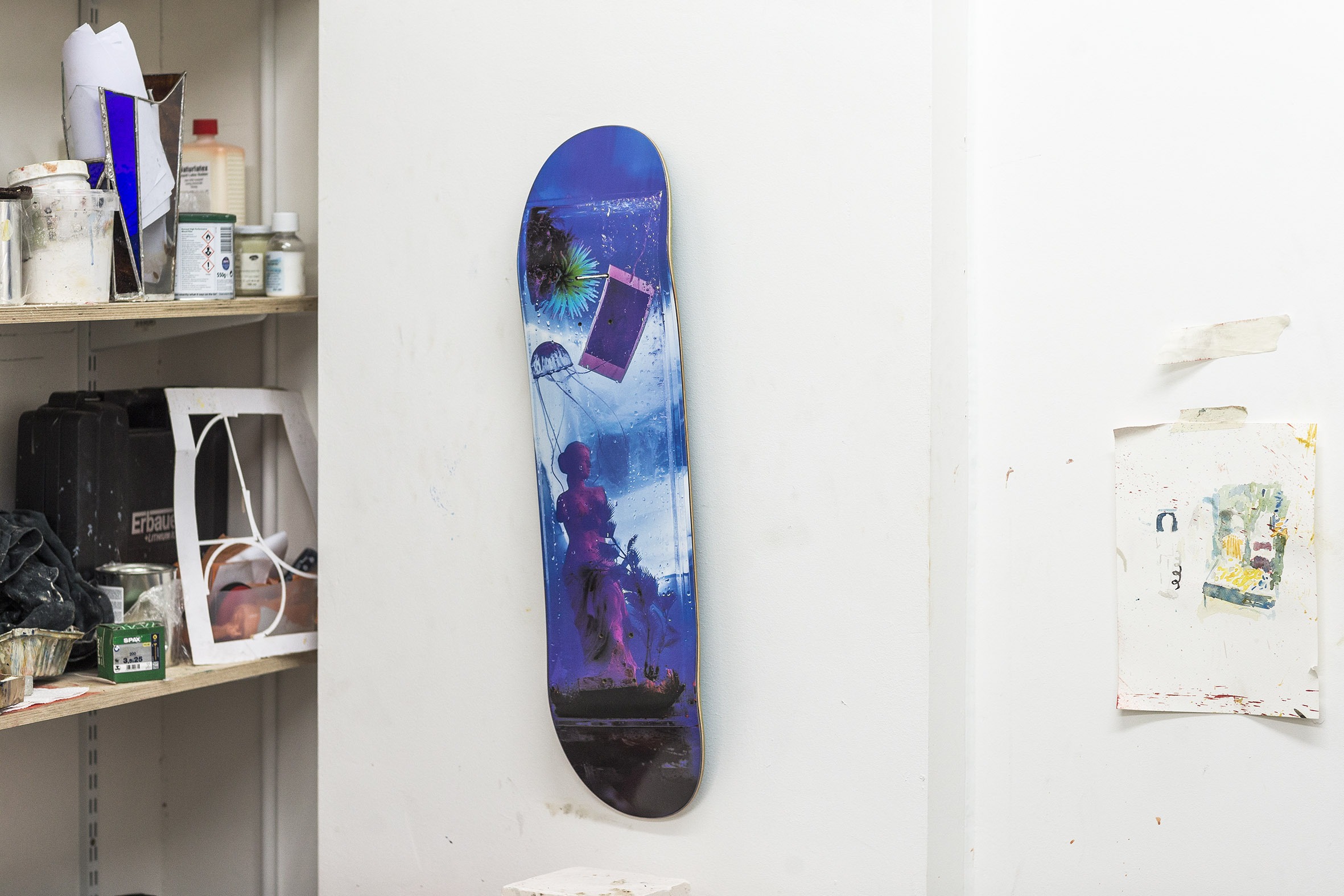 I would say it was when Alex Klein and Tony Vitello came to London for a week mainly to skate and see Tottenham Hotspur play. They were both really into it, And still now Tony comments on my paintings. Stokes me out. In reverse – I guess when I worked with Oliver Laric on his artists series.  I had no idea he had an interest in skating. He loves Tom Knox and the Thrasher comedy news round up guy (Skateline). He knew more than me about most of it (laughs).

For those of you unfamiliar, you co-own the glorious Isle Skateboards, whose output is absolutely faultless. Prior to Isle had you done any skate graphics or had you kept your art separate from the skate world?

No I had never done graphics before.

You’ve mentioned artists such as John Finneran, Ted Gahl, Matthias Weischer, Christian Hidaka and Sam Windett in your Stimulus interview with Ben Powell for Slam City Skates. But do you take inspiration from more inanimate and circumstantial occurrences, for example when a lamp post gets knocked over then becomes a bin, or a social movement perhaps?

Yeah I mean I think it’s the same as skating, I wasn’t sure if your sentence was going to say ‘when a lamp post gets knocked over and then becomes a pole jam’.

I think I am sometimes a bit tight and then skating opens up my imagination. It’s good to always keep an open mind and I try to encourage myself to be more playful with my approach to painting. 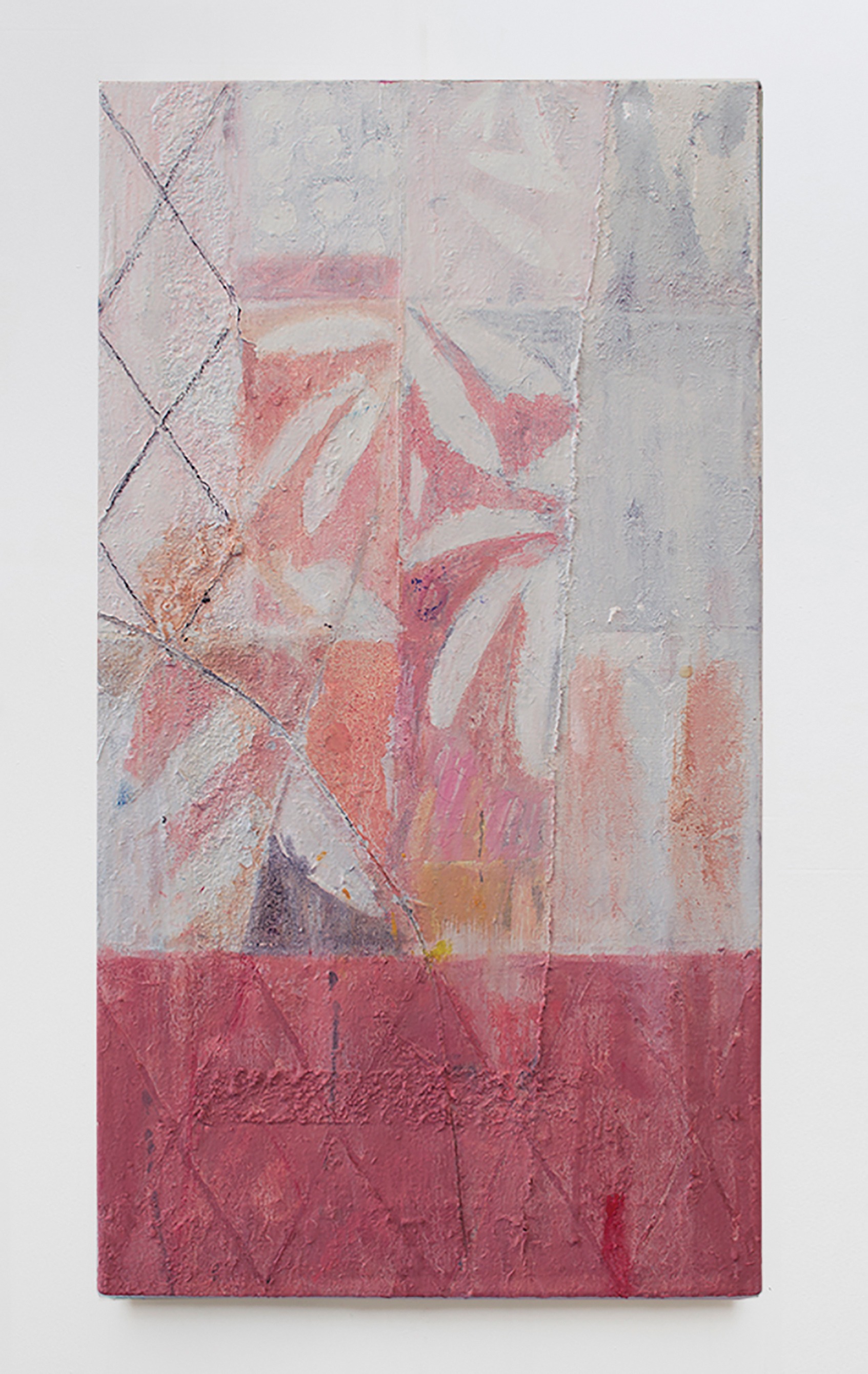 You’re obviously a fan of surrealist art, but does this leak into literature and musical stimulus also? If not, what gets you juiced?

Do you think I am obviously influenced? I suppose my new works could be seen as dreamy. I don’t know, I love the cubist period in art and how this developed through various artists. Like how Paul Klee was in that territory and yet his works feel so different. And I love the period around 1913-17 of Matisse when he made some of the most ambitious paintings – collaging space and time in a way never seen before. I still look at this stuff all the time.

Did you get a free Skype account from that advert you and Shier did? How did that come about?

(Laughs) no. I got 600 quid I think. Can’t remember actually. Shier sorted it out I think.

In regard to Isle Skateboards graphics, every time it couldn’t be more on point. Do you approach other artists for a guest series? What can provoke a series and is it hard separating your own work from the identity of the brand?

Thanks mate, I feel like my main focus is my painting and then as a by-product these other urges and desires come out through the graphics. It’s a nice balance. Graphics are so fun, I never over think them like I do my paintings. Artists series are so enjoyable, I just approach people whose work I like and I can see a link to Isle. It’s all very unprofessional, I am basically a fan/stalker disguised as a creative director. 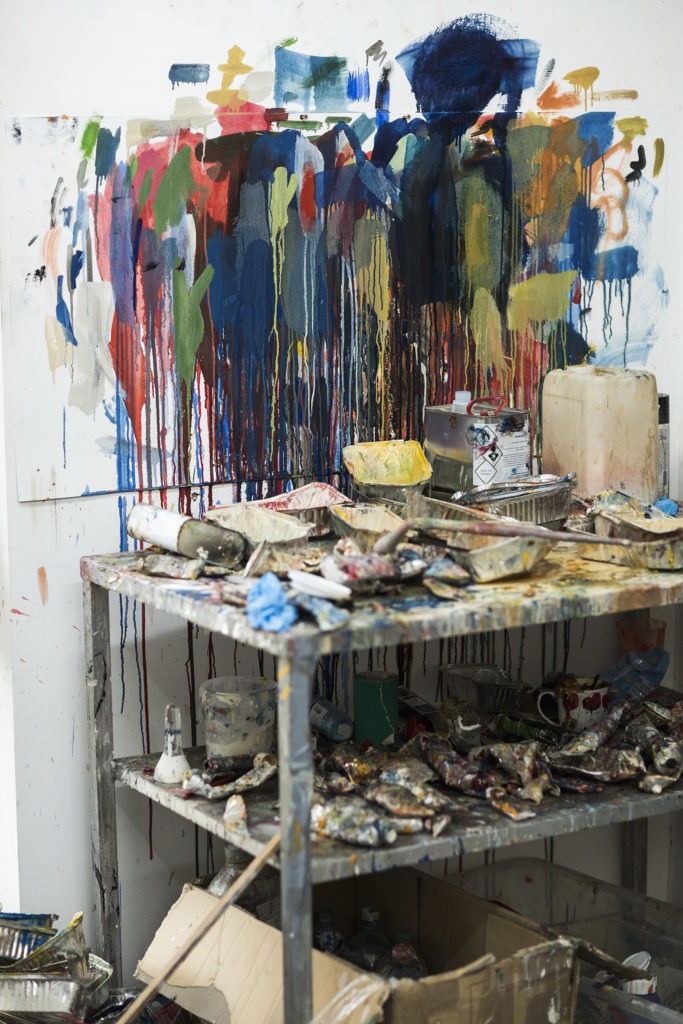 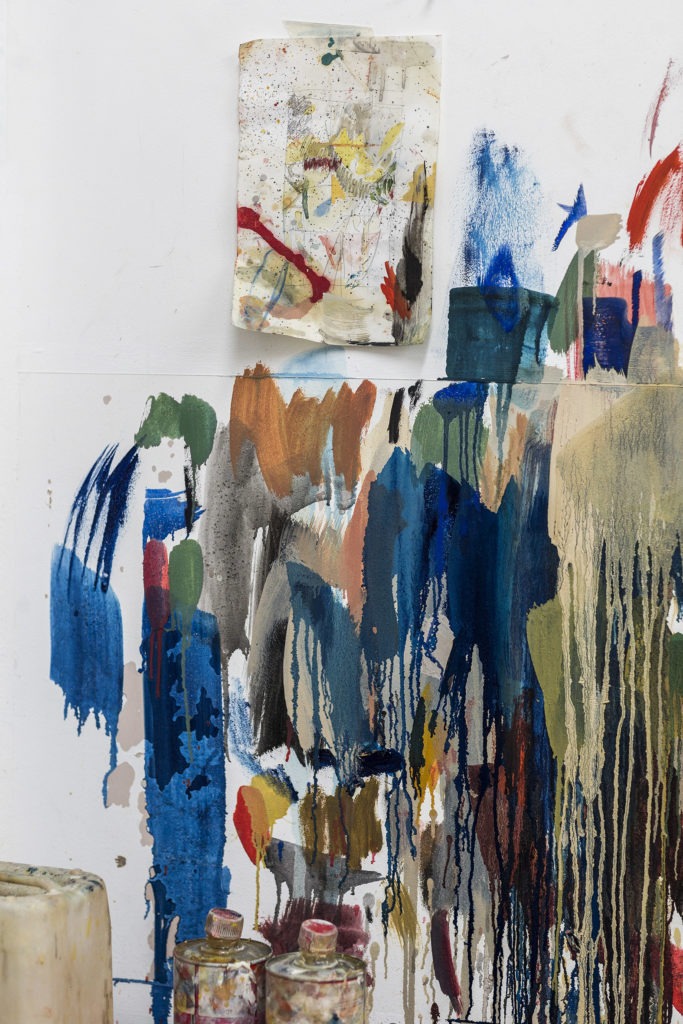 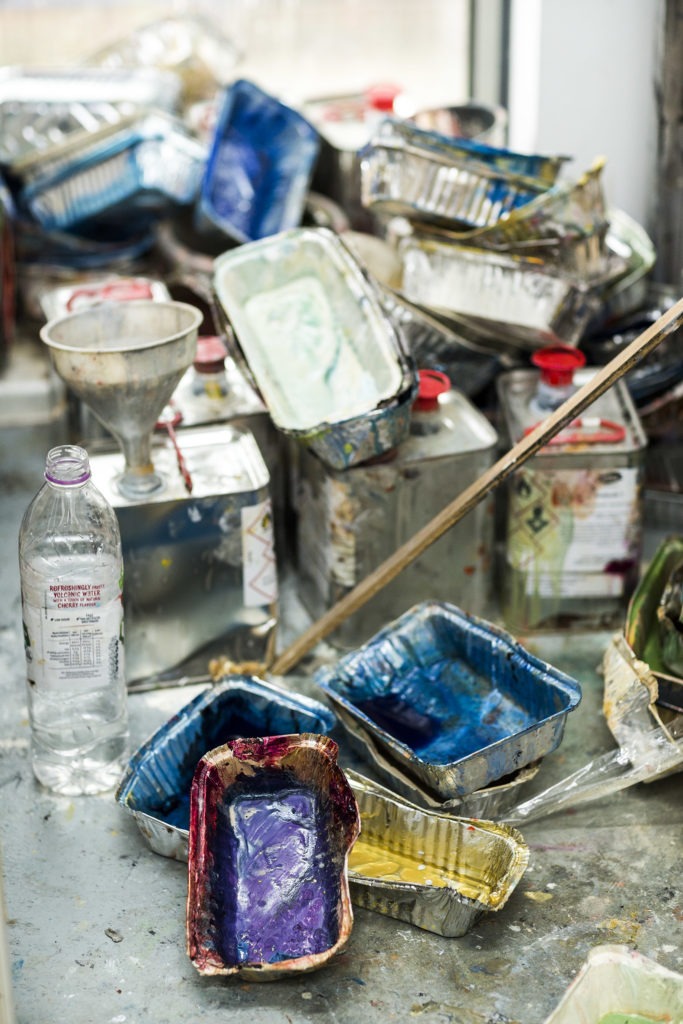 How does the process of producing a graphic for Isle compared to one of your own works differ. I’ve noticed how some of your own delightful work has found its way onto the underside of Canadian maple before.

Both processes take an initial idea that gets half worked then reflected on and then finished. Painting just takes much longer, it’s a slower, subtler process. Boards are thinner canvases too so it’s easier to make small exciting colourful images to fit them.

The Isle x Carhartt x Raphaël Zarka collab was incredible. How did this come about and is it a style of project you’d like to do more of?

It was because Sylvain (Tognelli) knows Raphaël Zarka and skates for Carhartt WIP, we all discussed doing a collab and Raphaël was up for it. Carhartt funded the production of his amazing art work and produced the film Dan Magee made. I would love to continue working on collaborations similar to this, not everyday you get to skate inside a museum.

Would you ever do a new spin on a spray heart graphic?

No way I would fuck it up. 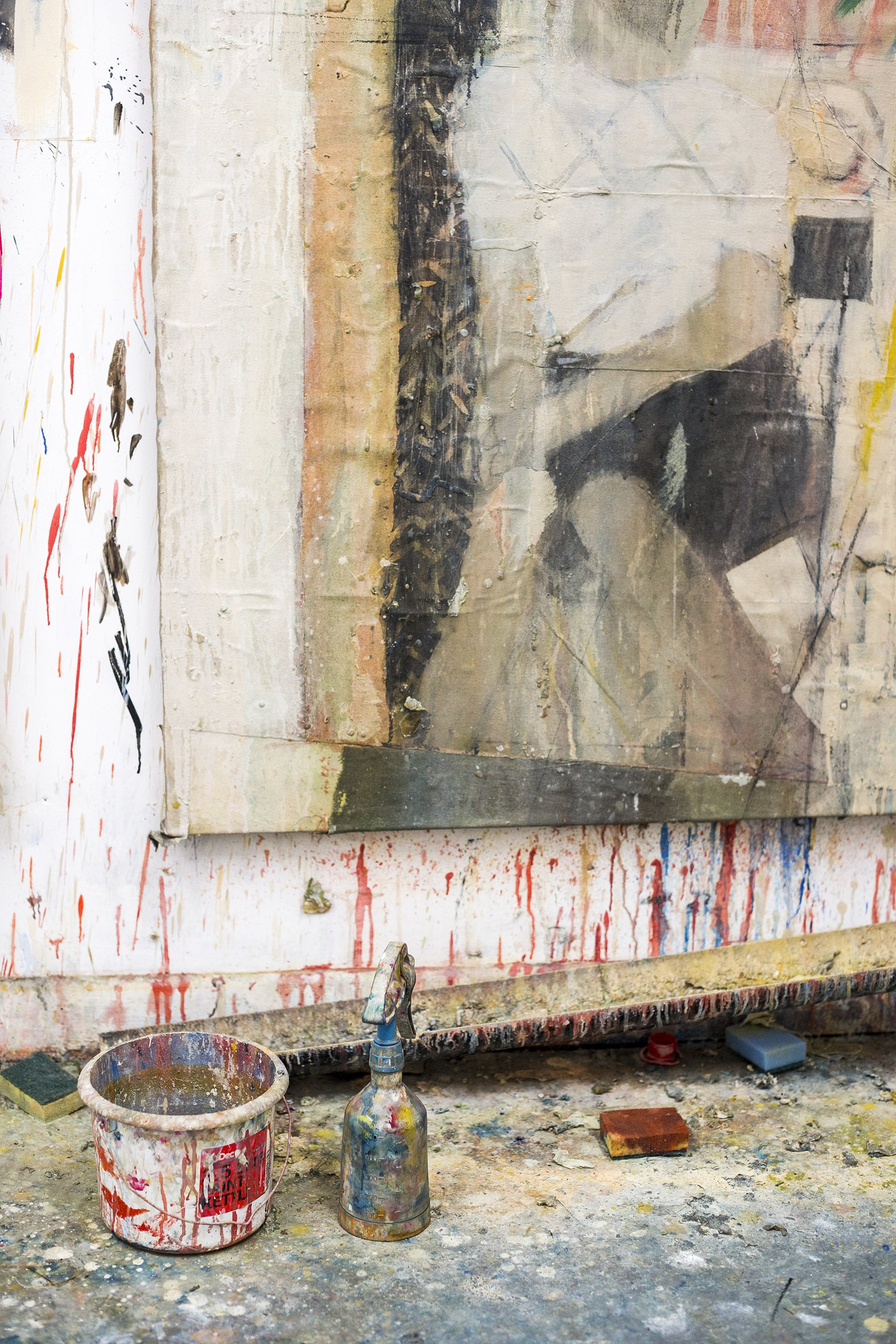 Do you feel the consistency of graphic releases helps you produce or do you feel it can compromise significance from your own perspective (I definitely don’t think their diluted). The 21st century curse of releasing something to just over ride it essentially.

I think because we don’t do that many releases it’s ok. I know what you mean though. It’s hard to keep up with new and interesting ideas if they need to be turned over too frequently. At the moment I think we have a good balance.

Do you feel paint on clothes blends the middle and working classes?

(Laughs), yeah but the middle classes probably have posh oil paint on themselves.

Have you any OG Blueprint garms and do you still own that skeleton hoodie from MFWTCB?

I moved house and lost that skeleton hoodie! Gutted! I only have some Blueprint boards and 1 t-shirt that I kept. The ‘abuse your architecture’ one. 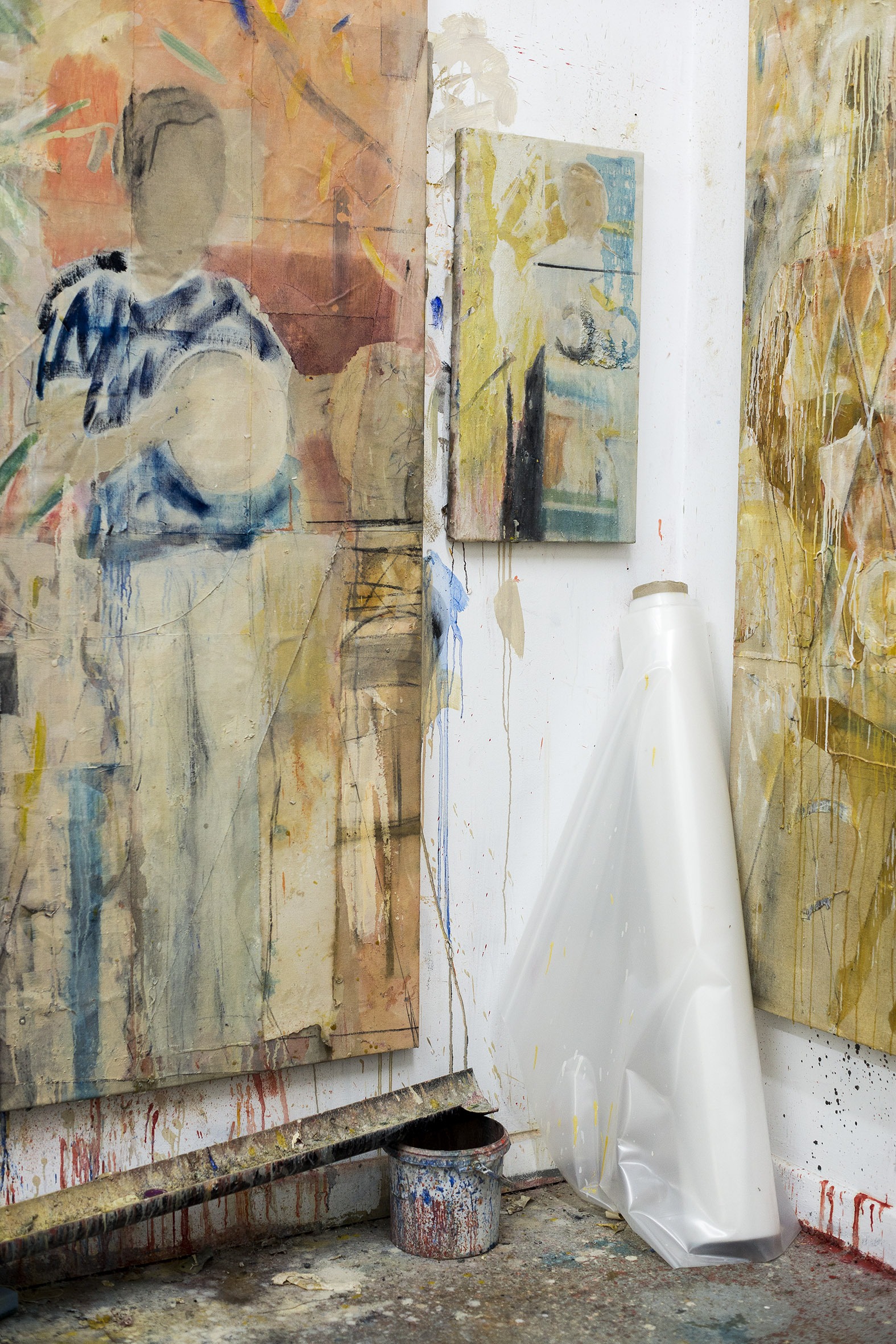 You’ve emailed Ted Gahl drunk and got a positive response, have you had any failed attempts with other artists, be it cyber or in person and by the same token, have you been on the receiving end of a drunken fan?

Luckily I haven’t been on the receiving end. (Laughs) I have had a couple of no replies and also people asking for money that I don’t have. I try to be honest and offer the option to do some boards more as an extension of their work and not something that will bring in loads of money.

I have a cool spider plant.

In the current climate of conservatives making it harder and harder to get art funding, and even charge more for exhibitions making it less accessible, how do you feel we can combat this?

I know, it’s definitely not very recognised as an important enough contribution to our culture. I just live in a bubble and try not to think about it, which is also a bit stupid. 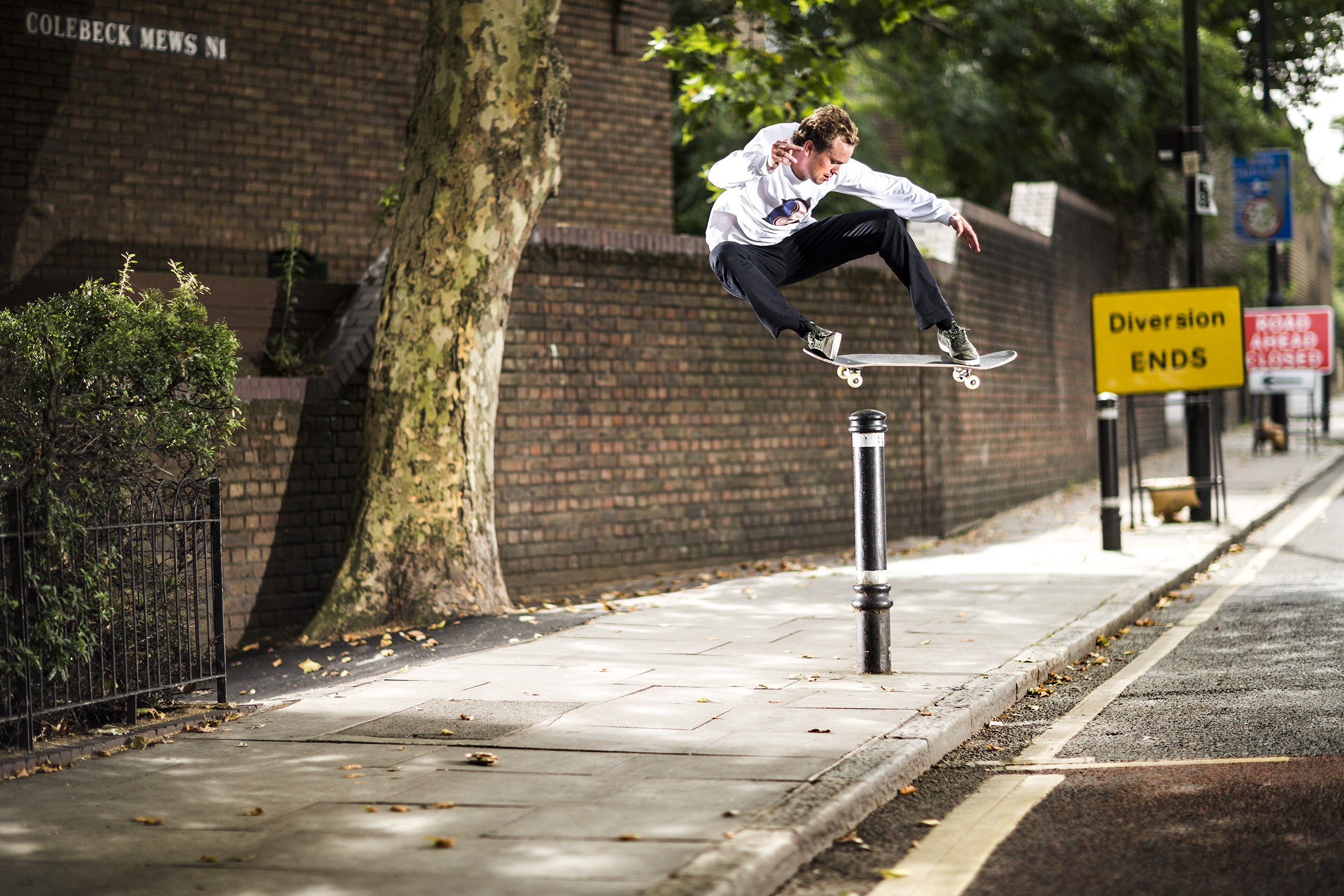 How passively high do you get going for breakfast with Kyle Wilson, my mate Matt says he lives opposite your studio.

(Laughs) I bumped into him a couple of times. He is my favourite skater and the nicest dude.

With a heavy back catalogue of stand out parts you’ve always stayed true to your style and preferences whilst adding a fresh twist and evolving What are some tricks you are most proud of and is there a section which bears particular significance to you and why?

I like my Vase part because I feel like it was a massive challenge to make an interesting section as company co-owner. I am always worried about being the dude who is over the hill and too self involved to realise. So maybe this is my last good section (laughs)?

Mate far from it, but we all adore that part! Tom Knox and yourself are not only team mates, real mates but you have had children on exactly the same day, is it your friendship that induced this synchronicity? How did you react when you found out and are joint birthday parties now mandatory?

Yeah, it’s one of those wicked things. Totally out of control, and I am so happy to always have these memories with Tom and his family.

When was the last time you snuck out in the middle of the night and skated to Kristin Hersh ‘Your ghost’?

Mmm, I will get back to you.

Is there a particular show you were a part of that trips you out?

Doing a show with Brian Anderson is definitely my proudest moment. He bought one too. He is such an inspirational dude and I looked up to him as a kid and rinsed his ‘Welcome to Hell’ part. 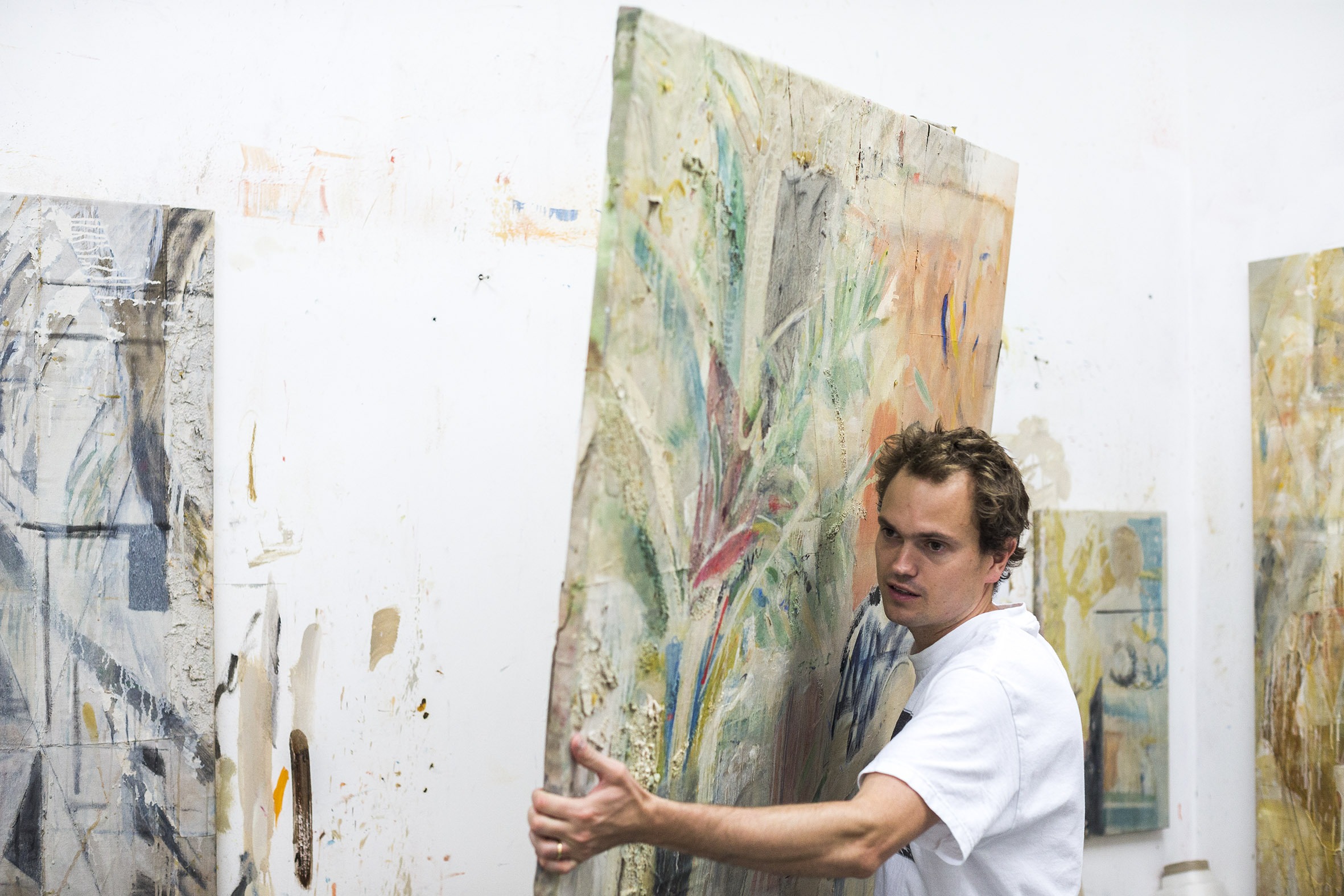 By the same token is there anything collective or individual wise coming up for in terms of showcasing work?

Doing a group show in August in aid of the mental health charity Papyrus.

Where can the public appreciate your work?

I have a website site: www.nickjensen.co.uk and in 10 years you can see my work at the Tate at my retrospective. Just kidding.

You kid but we’ll see! 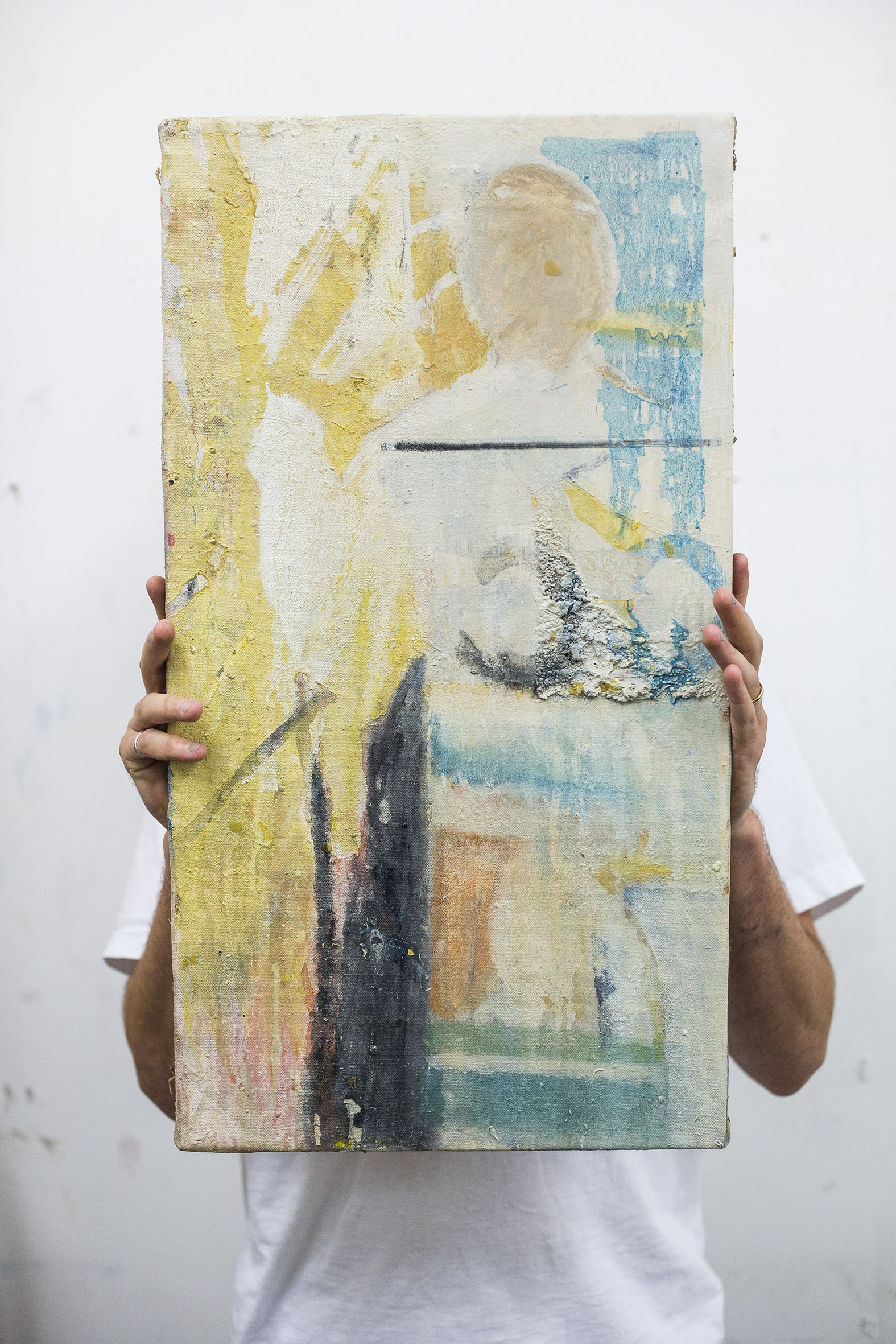 A few copies of Issue 10 are available on our shop. Click Jensen’s artwork below which graced Issue 10’s front and back cover to order Issue 10. All mags free with clothing orders. Shipping worldwide.

The Ben Raemers Foundation have uploaded their next video with Nick Jensen (pro skater and Isle Skateboards co-founder) where Nick speaks openly and honestly about his own experiences with mental health.