Following on from the recent video release ‘ Joe & Tommy’s Pack Of Lies‘  by The National Skateboard Co. featuring full parts from Joe Gavin and Tommy May we thought it would be timely to upload Joe’s Issue 18 interview chopped and screwed by Ryan Gray! Scroll to have a read and if you missed it check Tommy May’s Issue 21 Interview here then rewatch the new video below!

Joe Gavin is (pardon the expression) a national treasure. He’s been an unwavering presence in Manchester skateboarding since he first emerged out of the city’s legendary Gasworks vortex in the late 1990s.

Over the decades since, not only has Joe been responsible for one of the most progressive bodies of street skating work that the country has ever known, he has played no small part in ensuring that the industrial heartland that he calls home has had a perpetually thriving and welcoming skate scene. From making full-length videos and shooting photos, to manning the shop floor at Note and organising grassroots events, Joe tirelessly strives to keep skateboarding in Manchester marching forwards. He is the living embodiment of the scene that raised him, and has earned the respect of skateboarders the world over without ever needing to venture beyond the weather-beaten streets of his beloved hometown. He has always done everything on his own terms, and we wholeheartedly admire him for it.

This interview is just one part of the multimedia full clip that Joe will be unleashing on the unsuspecting public before 2020 comes to it’s long overdue end, as he ushers in the next Mancunian generation for Note, and continues his own journey as part of the revamped The National Skateboard Co. roster. He’s also the CEO of game changing bolt company Maybe Hardware. But like everything else I’ve just written, you know that already. 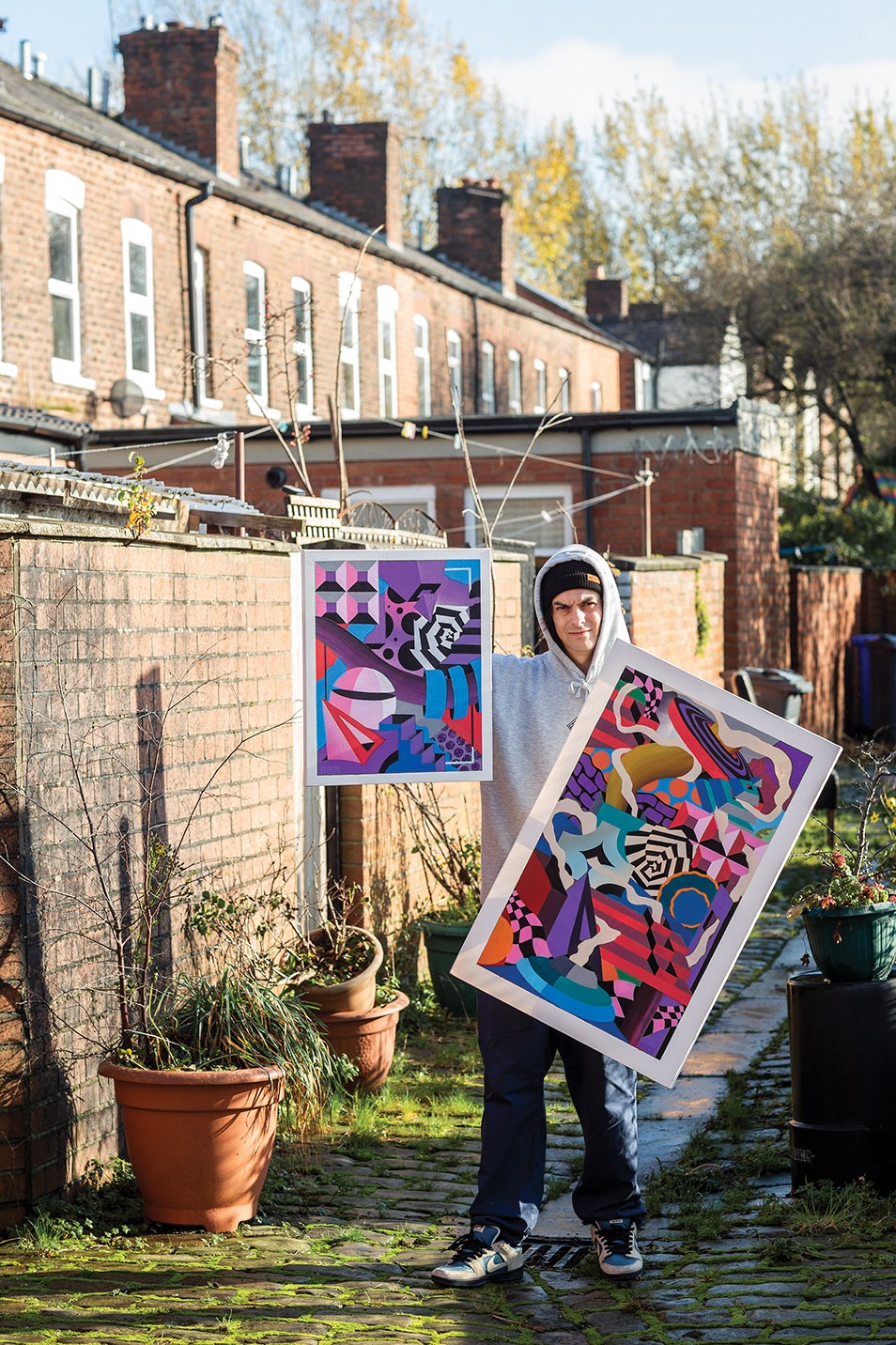 Lockdown 2 has been pretty mellow, as you can imagine. I’m working this time, so there’s no furlough fun, but recently they’ve pedestrianised Thomas Street where Note is, so it’s easier to skate outside the shop. I’ve been skating quite a lot, trying to take advantage of the empty spots, and hanging out with my girlfriend. 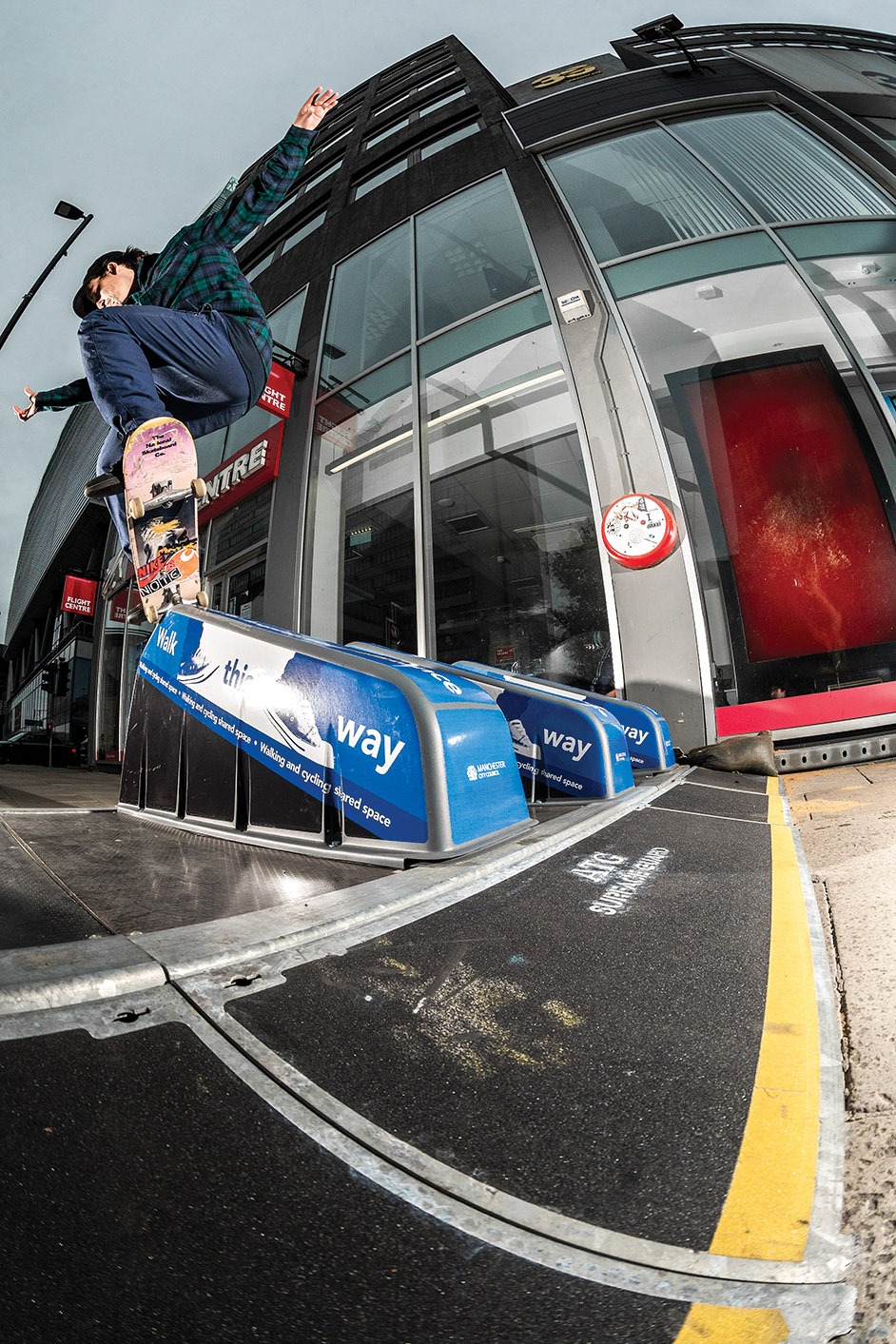 You spent a lot of Lockdown 1.0 ‘essential exercise’ time filming your IsoVague section around Manchester. What was it like going out and filming yourself? Also, what was the public’s reaction to seeing you out skating during the original lockdown?

At first it was really weird; I was kind of lost for a week or so, plus I’d had a bad ankle injury so I was only just getting back on it. It was really nice weather so I actually got pretty into skating on my own. I became super focused on getting out on my bike, and skating the worst skatepark ever near my house. But then they fenced off all the parks, so I got obsessed with finding shit little spots to skate. Also, me and my girlfriend had just gone through a pretty tough time and I found skating really helped me to stop thinking about things.

When you take away the social side of skateboarding, all you really have is pure skating; I’d do a trick and look around and realise there was no one there to celebrate with, so you just end up doing more tricks. I probably skated more than usual. As for people’s reactions, there was hardly anyone around! The streets were empty; I loved it. 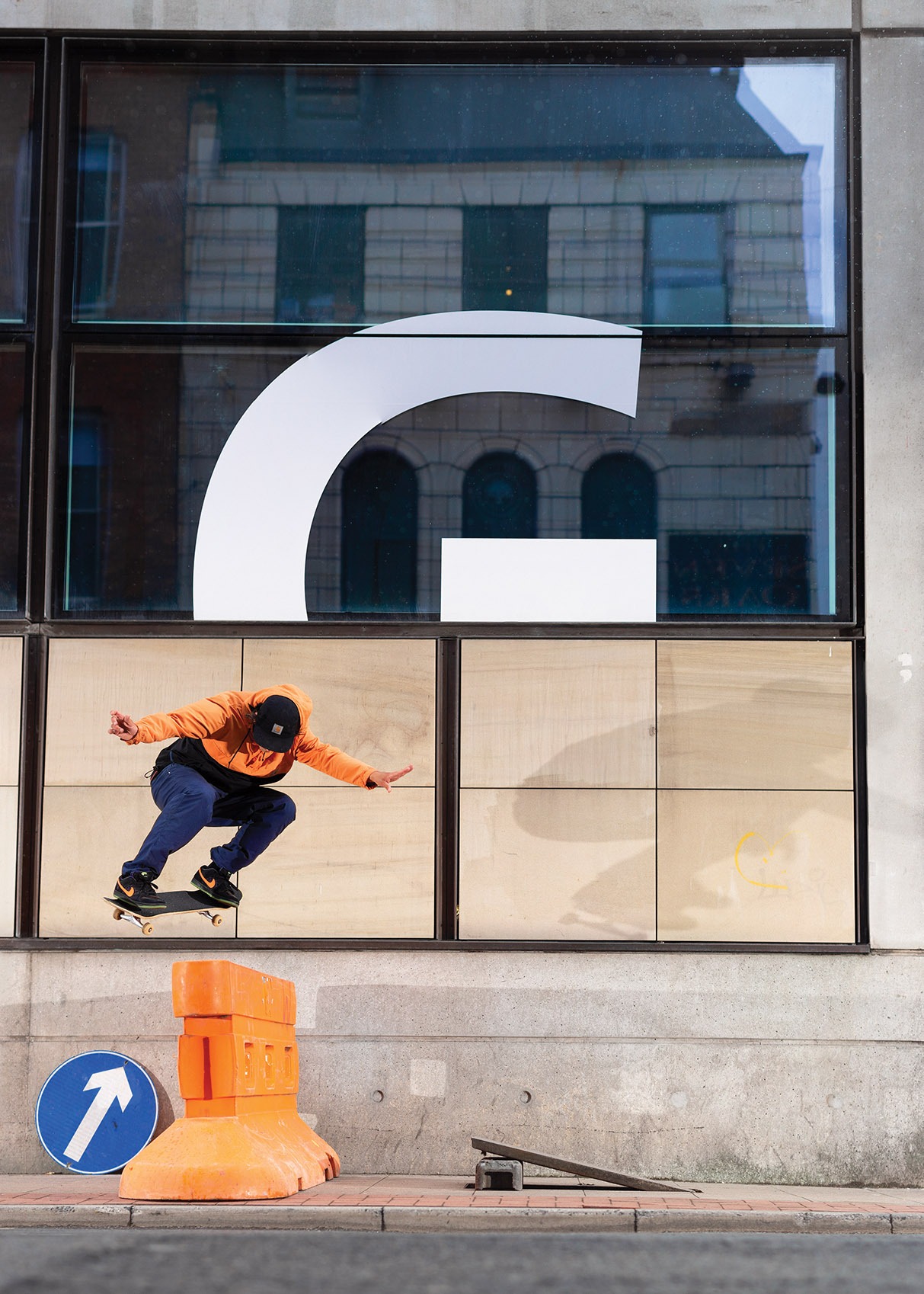 Landscape unfortunately came to an end in 2019; can you tell us a bit about the backstory there? Was wrapping up the company something that you knew was coming?

Nah, I didn’t know that was going to happen at all. I got the call about three weeks before I’d finished the video (Seasons), which initially was really shit. But then I was kind of relieved to be honest. I felt like it was getting tough to get anything done, and I could tell things weren’t selling very well, which was becoming frustrating. I was getting very stressed about it all; I put a lot of pressure on myself with it being an established brand. It was actually nice to end it with the video and the board we did for Chris (Barrett).

Looking back over the seven years you were there, what would you say is your proudest Landscape moment?

Ahh man, there were a few. When I first took over, my two goals were to make a full-length video, and to get Nick (Stansfield) a pro board. Years before I’d seen a graphic that Fos had made for Nick, but it never came out. I just thought that was kind of shit that Nick thought he was going to have a board years before, but didn’t, for some reason. I was so stoked to see his little face when he walked into his surprise pro party; that was sick. I was also stoked to get Jeremy (Jones) and Dunder (Scott Anderson) on; they were two dudes that I was really backing. Also, doing the board for Chris meant a lot to me, and all of his friends and family, so that was special. 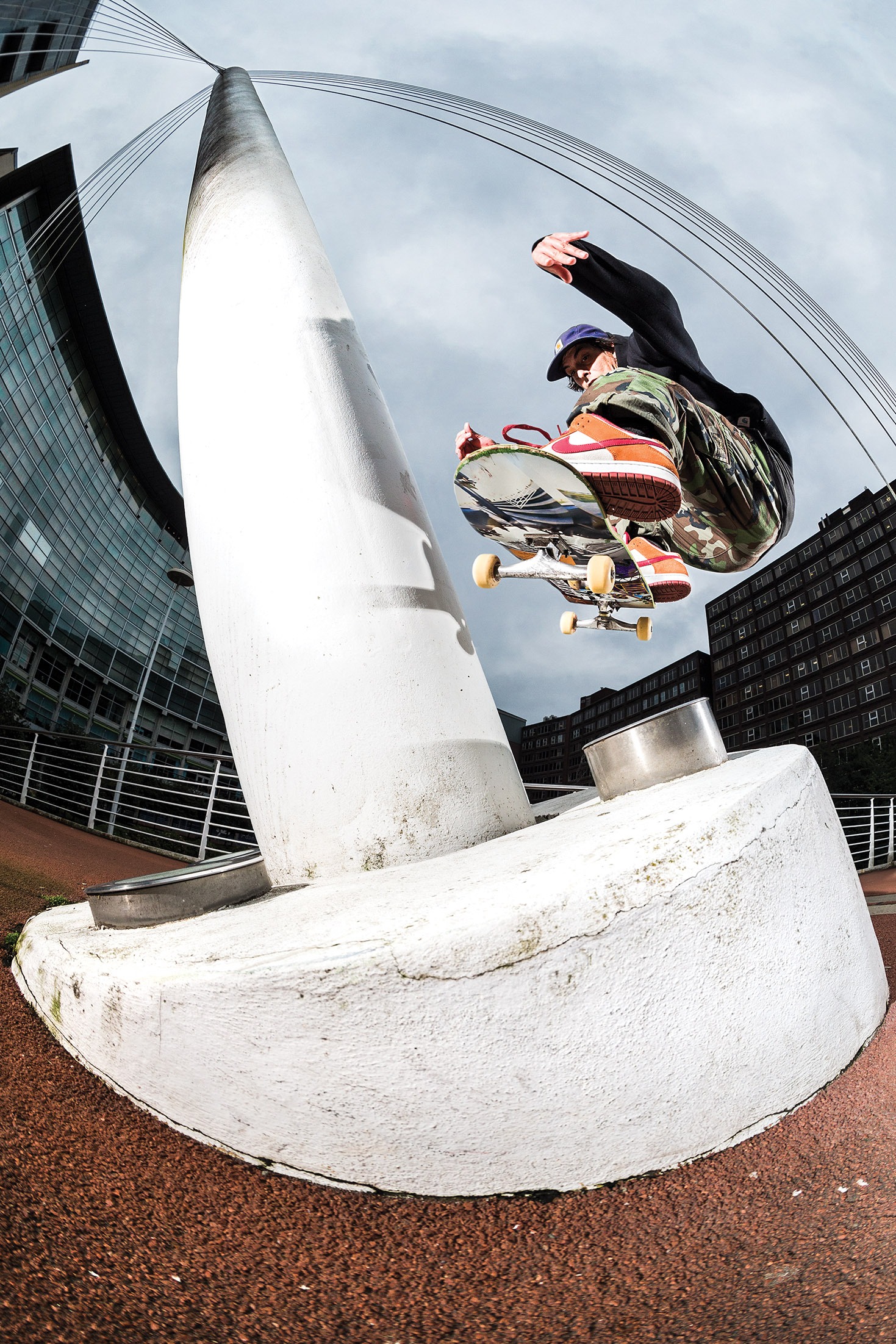 It was announced back in October that you’d found yourself a new board home in the form of The National Skateboard Co, something that I’m still extremely humbled and hyped to say has happened. From your perspective, how did that opportunity come about?

I guess after Landscape I just concentrated on having loads of fun with my mates with no stress, so I wasn’t really looking for another board sponsor. I’m not sure exactly when, but you hit me up to send me some boards to try out. I was really stoked on the boards, but I was enjoying not having to worry about filming for anything, and just wanted a bit of a break from it. Then I went to the National tour video premiere (Under Revue) and realised Tom Brown was one of the owners. We had a long chat and it got me stoked; I think I was a bit pissed and texted you all hyped, saying I was keen. 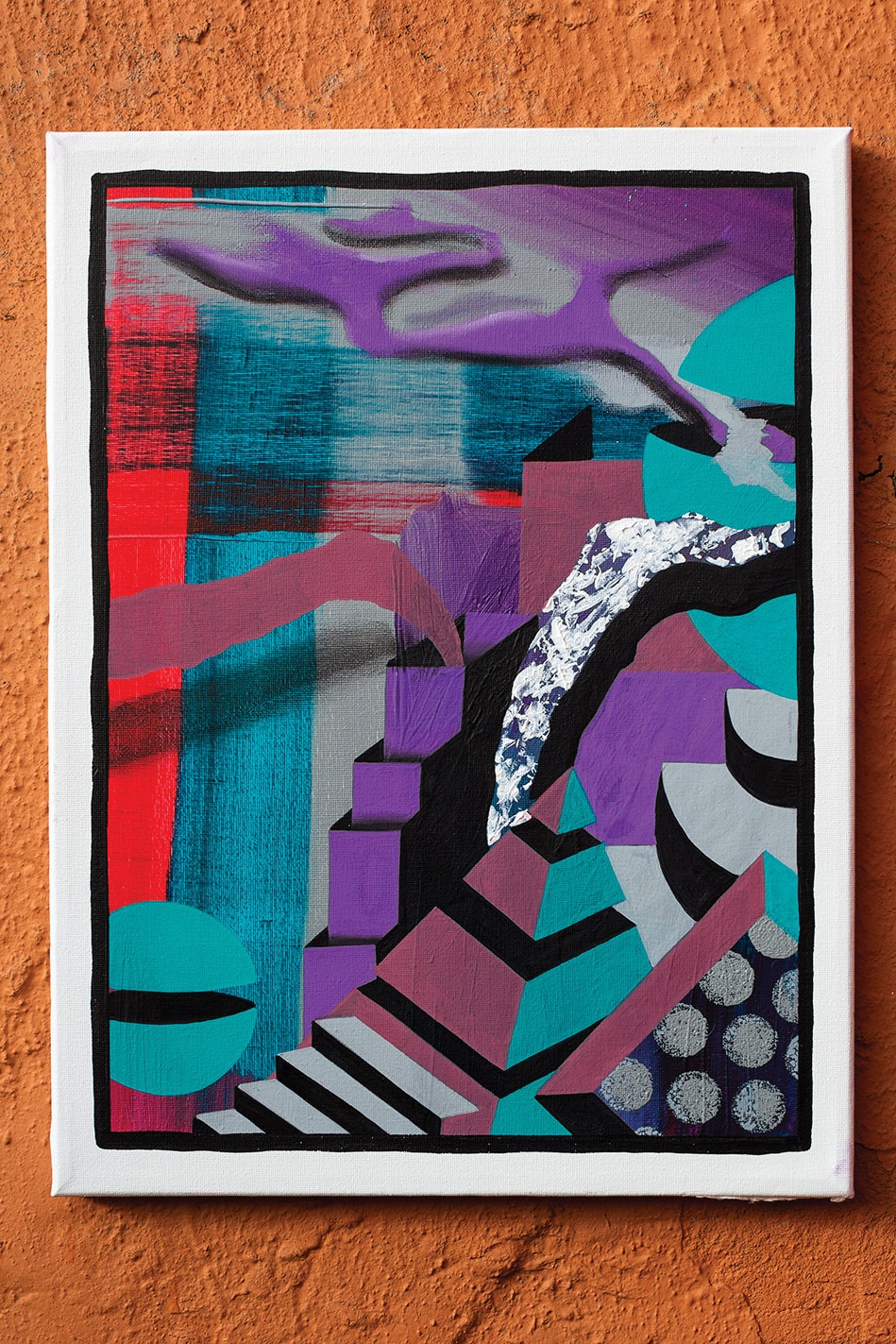 Around about the time that this interview appears, you should have a new section coming out too. Care to tell us a little about that? I know you’ve had a few injuries this year, but you seem to be still getting things done regardless.

Yeah my ankle has been fucked since January; that mixed with getting old and some other personal things has made it pretty hard, so don’t expect anything special. But I’m stoked I’ve been filming with Sean (Lomax) quite a bit, and I’ve managed to get it done. I guess most of the parts I’ve put out have taken at least a year or two, so it’s been a bit stressful trying to get something together in a pretty short time frame.

You’ve always been on the case with your art, but recently your @defomaybe Instagram account has been getting updated pretty regularly. How did you and art first cross paths?

I’ve been into drawing since I was a kid, but I guess a few of my close friends quit skating and started getting into graff at quite a young age, so I just started painting a few years after them. It was a way to hang out with them more. 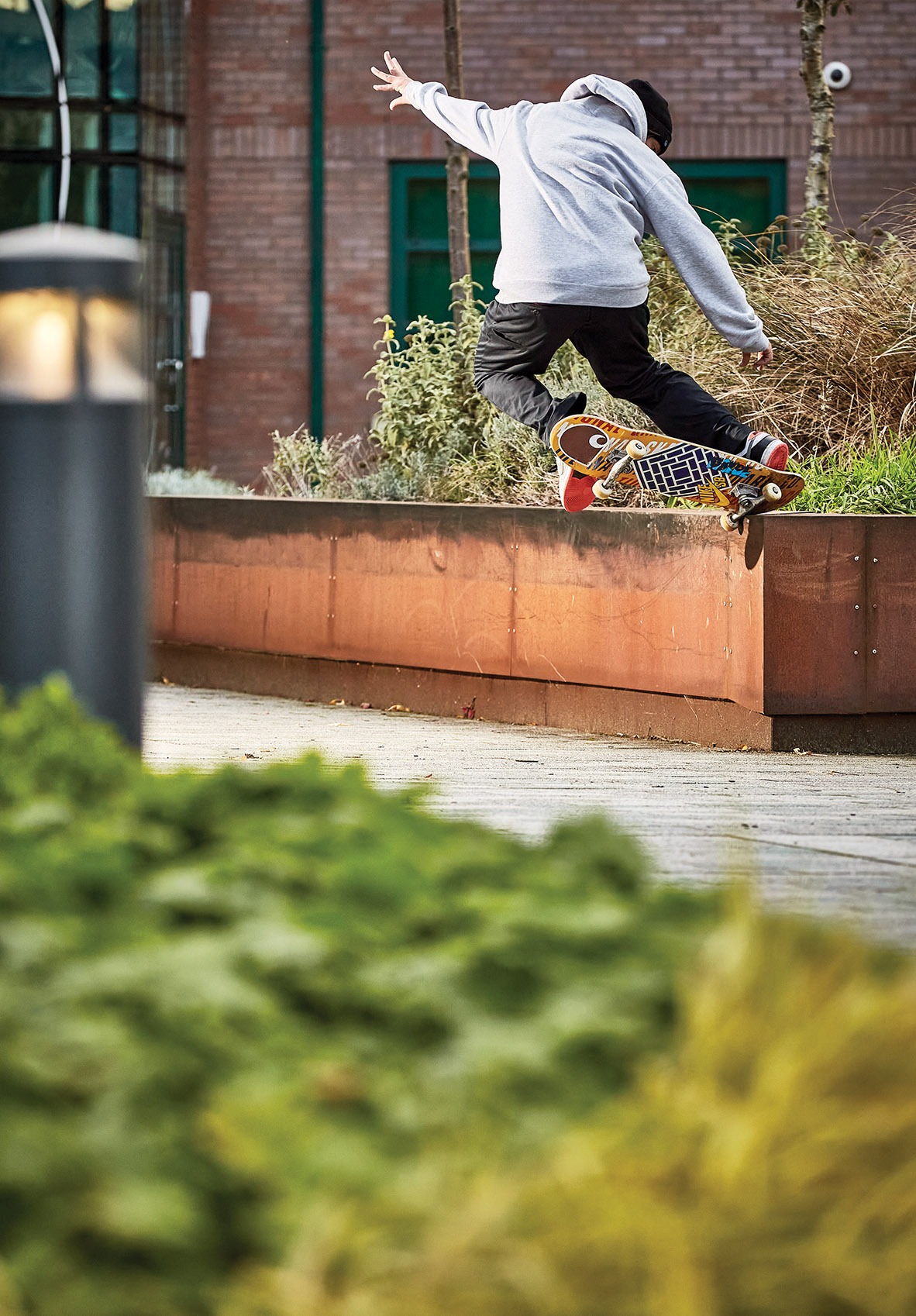 Who would you say have been some of your biggest artistic influences, and why?

My friends I guess; Dose, Krek, and Tets, who I think collectively influenced me massively in a graff way. As far as abstract stuff, I try and just do whatever comes to mind, sticking to similar shapes and colours to keep things consistent. I also take a lot of influence from old ‘80s and ‘90s board graphics and cartoons, but I generally love making it up as I go. 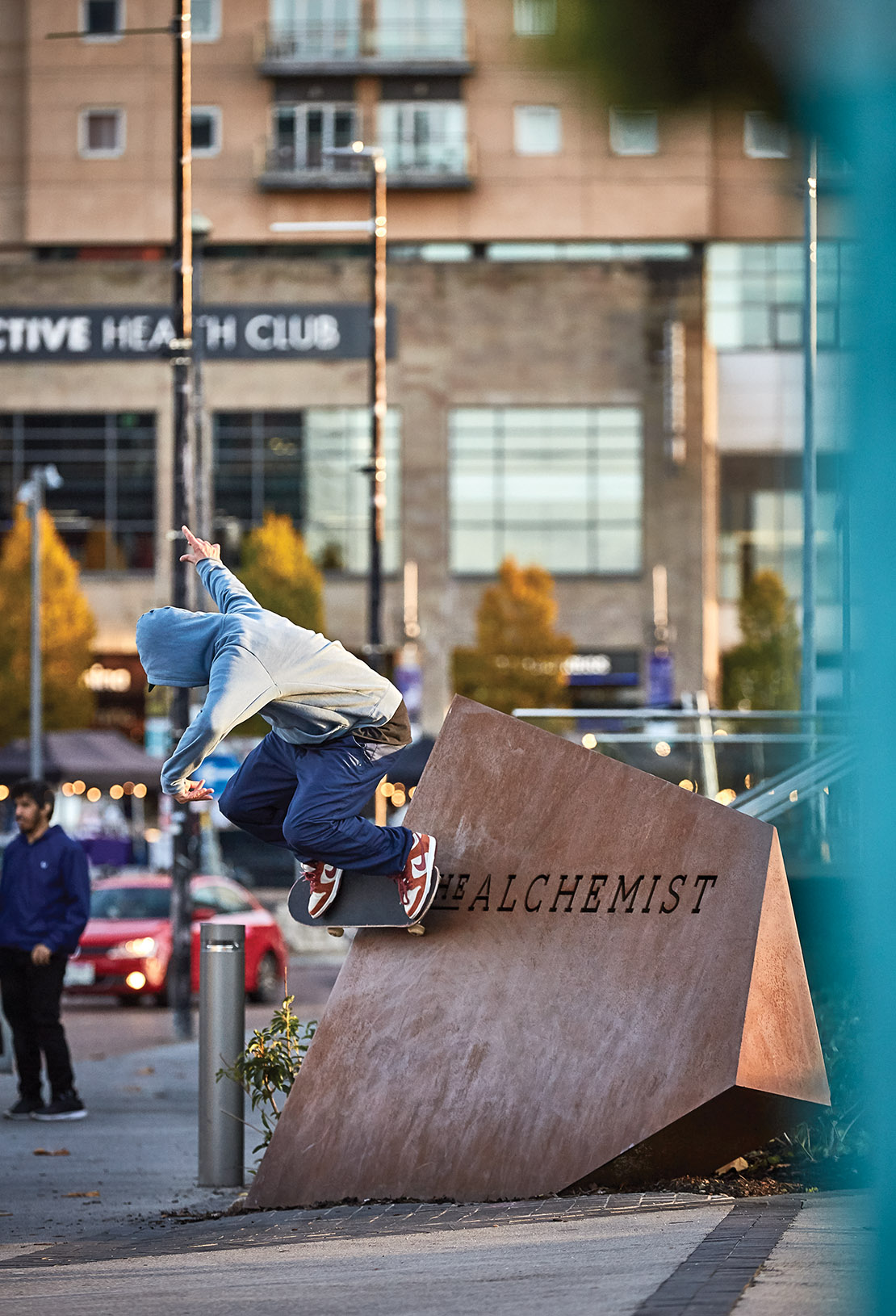 Maybe Hardware sprung into existence earlier in the year, which seems like a perfect outlet for your art, whilst giving the skateboard community some much needed next level bolt technology. Where did the idea to branch out into the hardware world come from?

I was working on Maybe for a while on the sly; as you say, it’s a perfect outlet for my art and my filming. I just wanted to do something for myself that I had full creative control over. I was really worried that it wouldn’t work out and everyone would hate it or something, but it’s been going really well so far.

I was sat there one morning with it all ready to go, proper hesitating on whether I should launch it, then I had a rare moment of confidence and posted something on the Instagram and set the website live. I sold pretty much everything in a few hours, and I got a few orders from shops. I think I actually picked a good time to launch as everyone was just sat at home on their phones during lockdown. 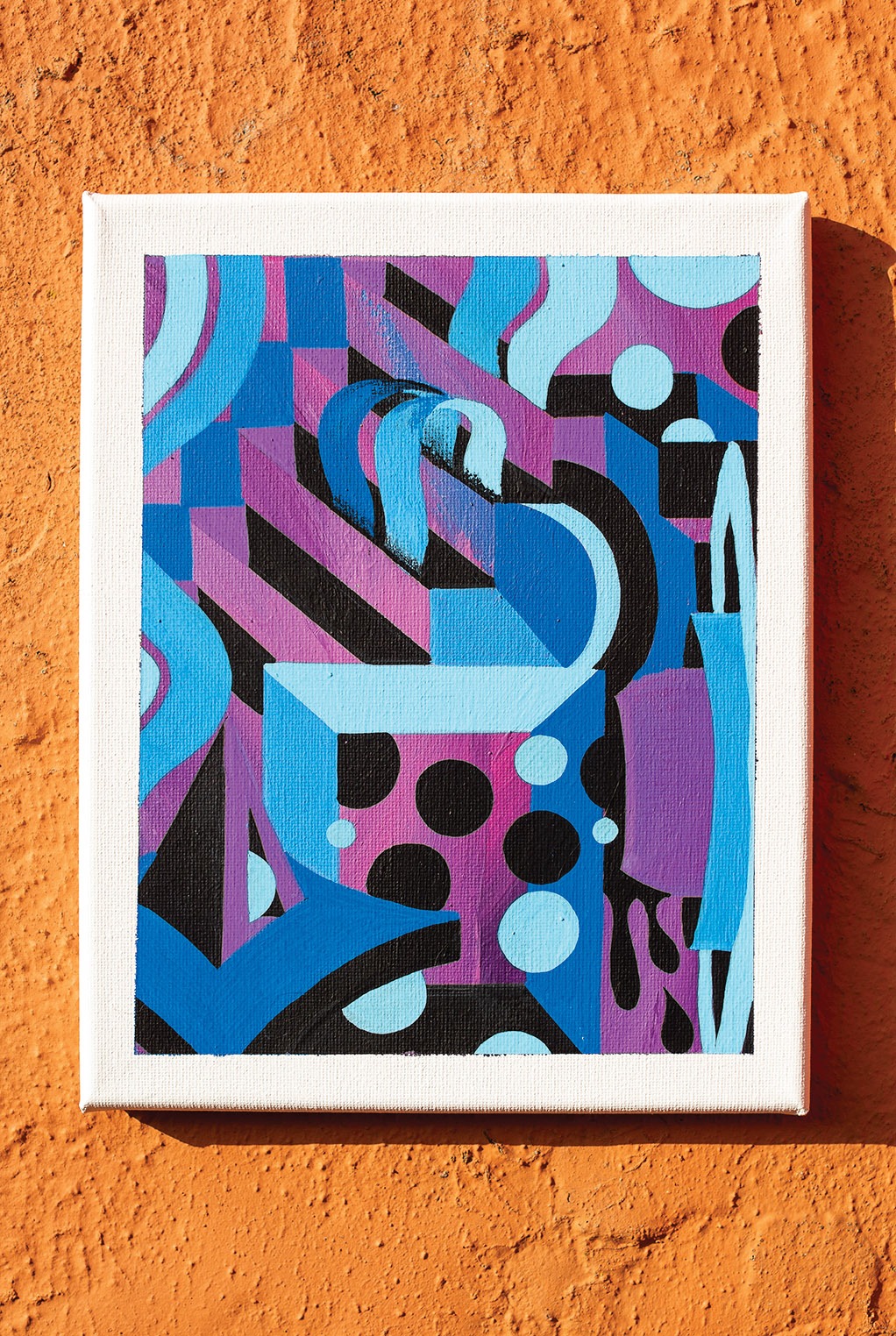 What differentiates Maybe bolts from those of some lesser brand? 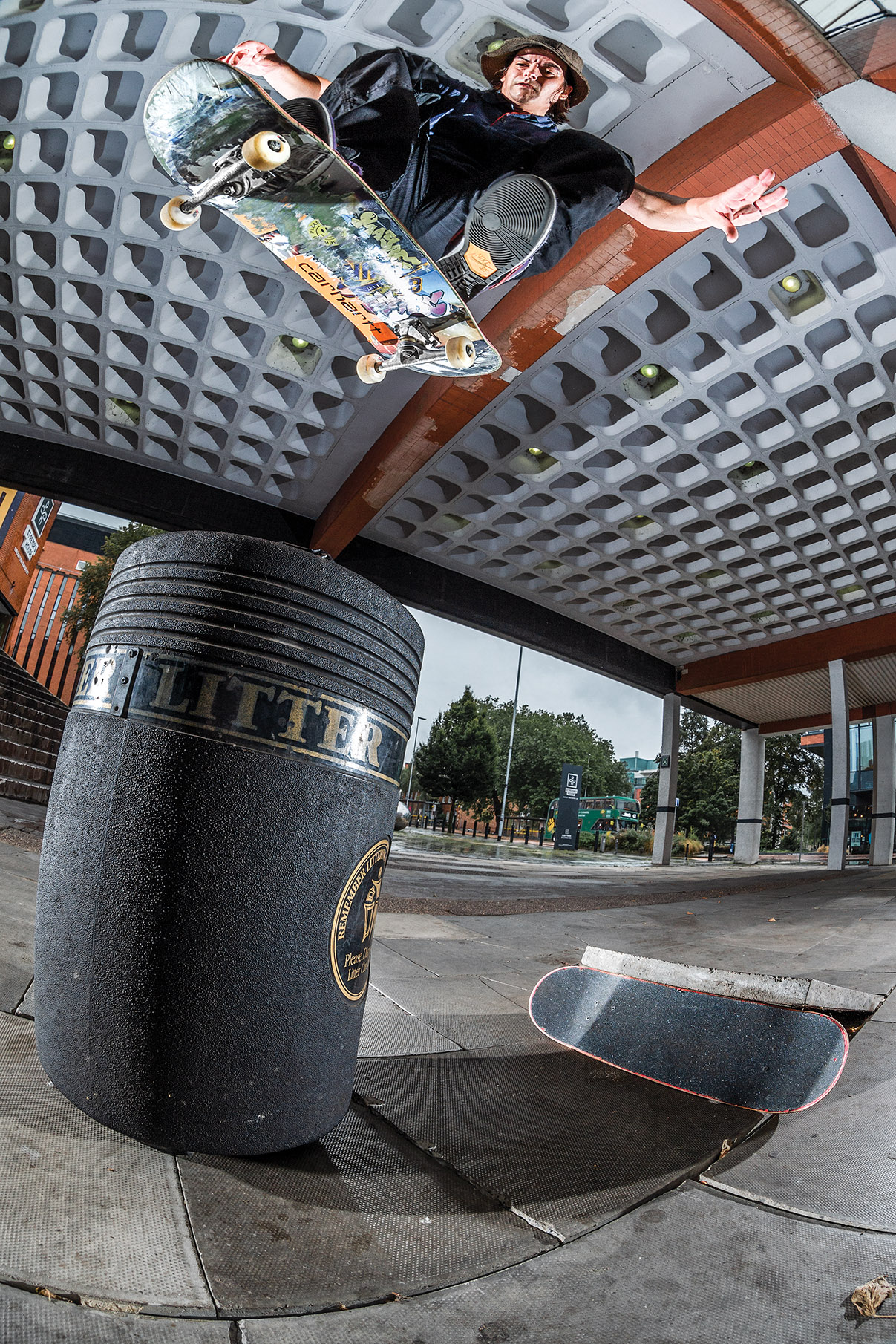 You recently released the special edition Reemo shirt for Maybe, donating all the profits to the Stephen Lawrence Charitable Trust. Where did the idea from the shirt come from, what was the reaction like, and do you know if Kareem Campbell himself ever saw it?

He posted it on his Instagram story, so I was pretty hyped on that! I really want Maybe to be a platform for things that might help out good causes. I’ve always been massively into hip-hop and many other aspects of black culture. I just wanted to do something to actively show support to the BLM movement, raise awareness and pay homage to one of my favourite skaters. I believe Kareem broke down barriers, and influenced a generation of black skaters to pick up a board and shred. We only raised a couple of hundred quid, but it’s a start. 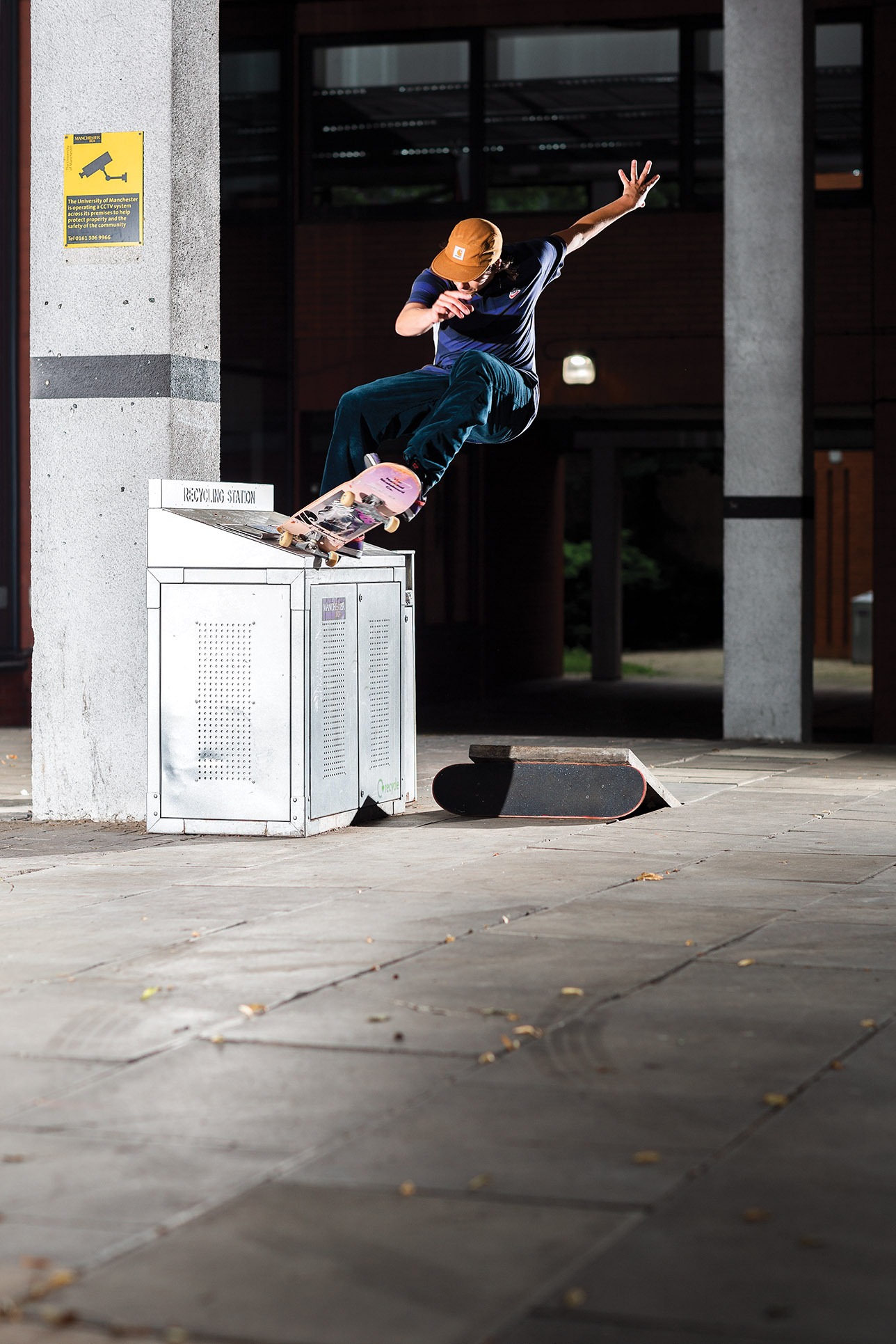 As well as filming your National part, I know you’ve been working on a new Note video project. That must be nearing completion now…

That should be out before Crimbo. That’s been well fun actually; I feel like we’ve just had a laugh and used it as a rad way of getting the newer guys on the team a bit of shine. It’s mainly shared parts, and it’s a good old-fashioned shop video that’s not too serious. I think that’s kind of what a skate shop needs to do really, create a bit of a fun vibe and give people something to work towards. It’s more like a scene video really. 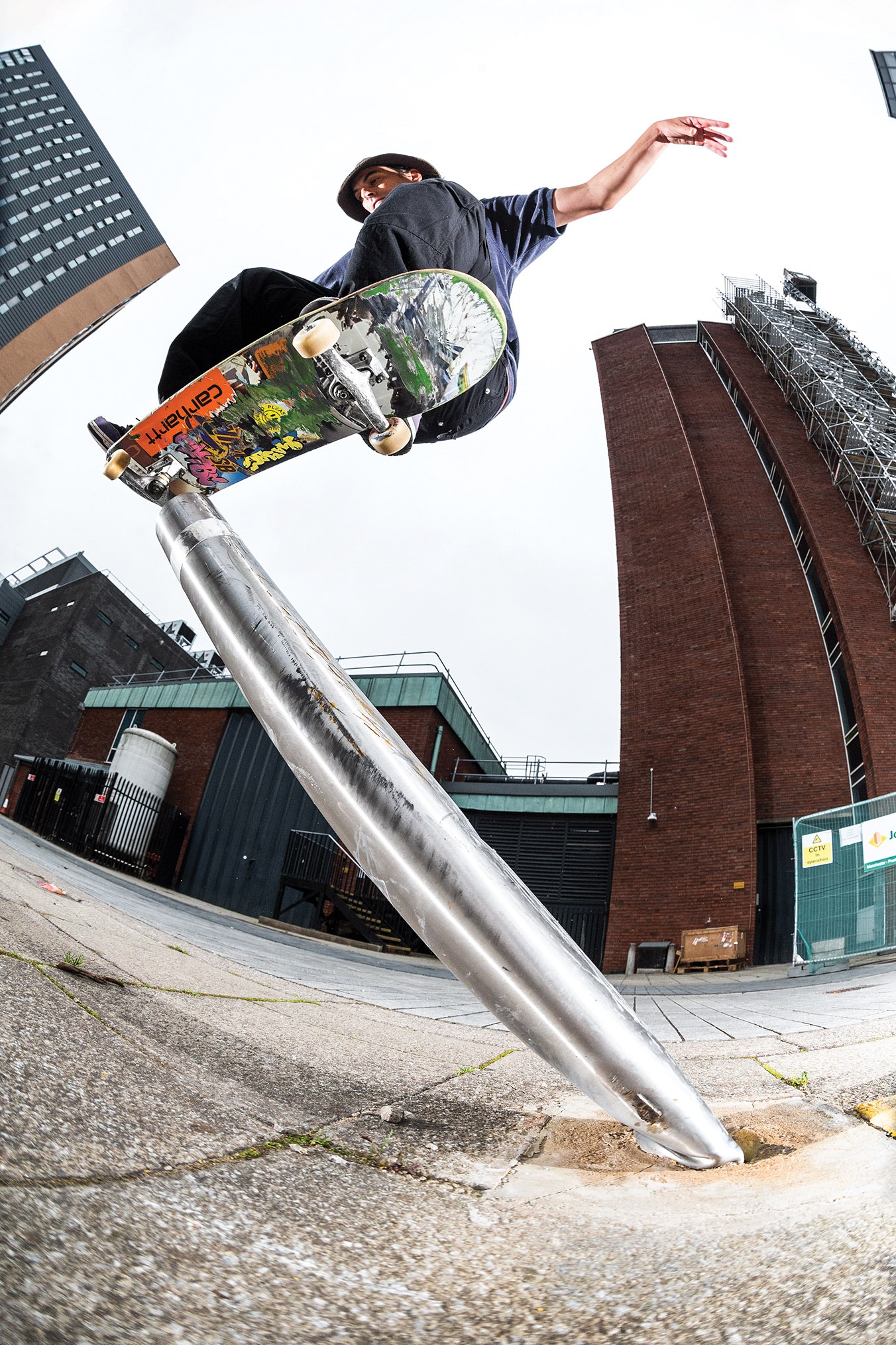 And lastly, what was the most ridiculous or memorable thing you saw Chris Barrett do on a skateboard?

Ahh Chris was an absolute beast. Just watching him charge spots with no hesitation. I was always blown away by his hardflip back tails. He could do them so easily; it was crazy to see such a hard trick done with ease. Generally everything he did was awesome. I filmed him nollie inward heelflip this really awkward gap over a rail; that was crazy. Love ya Chris. 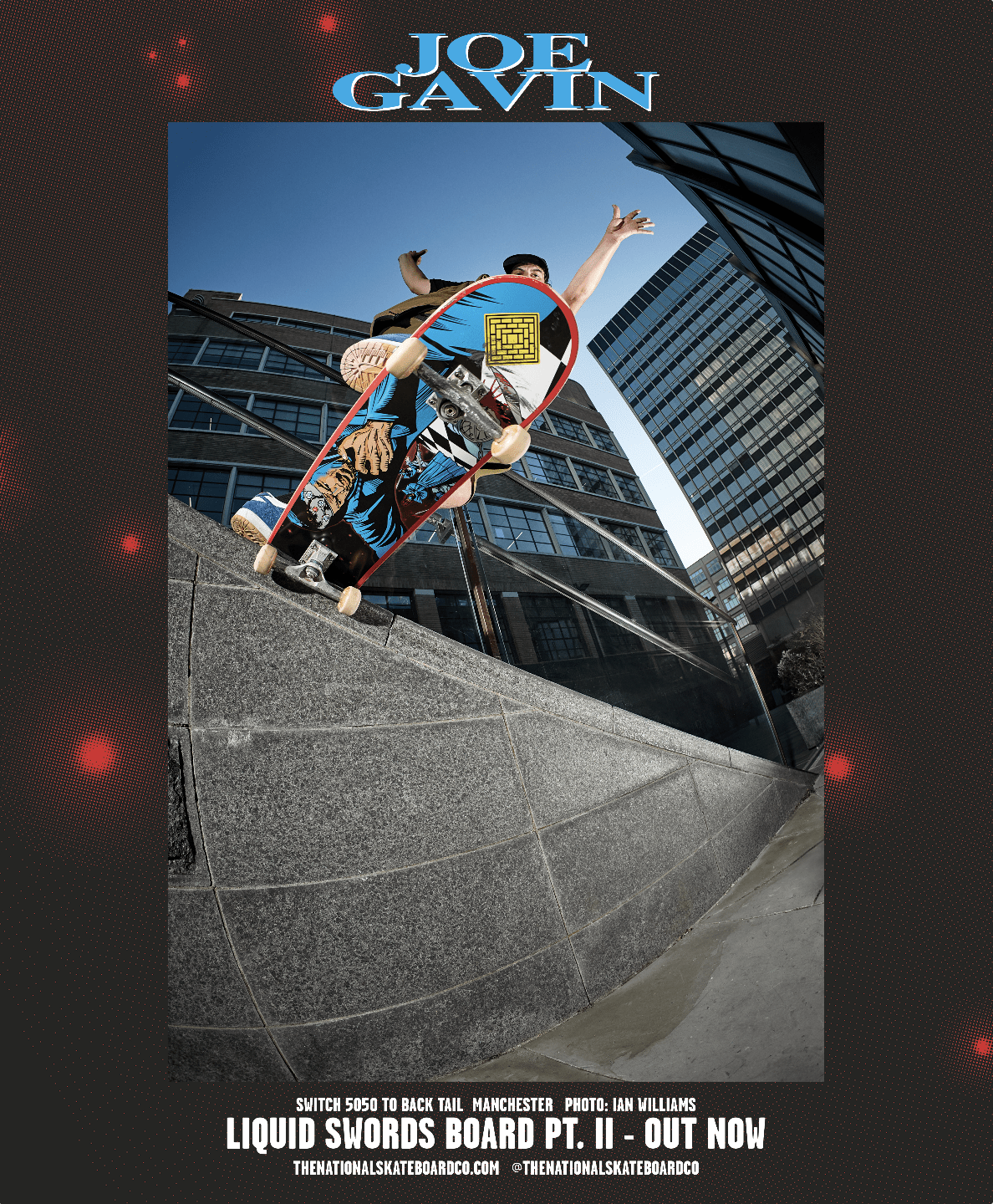 To celebrate Tommy May's pro status we have uploaded his full interview from Issue 21 by Ryan Gray.