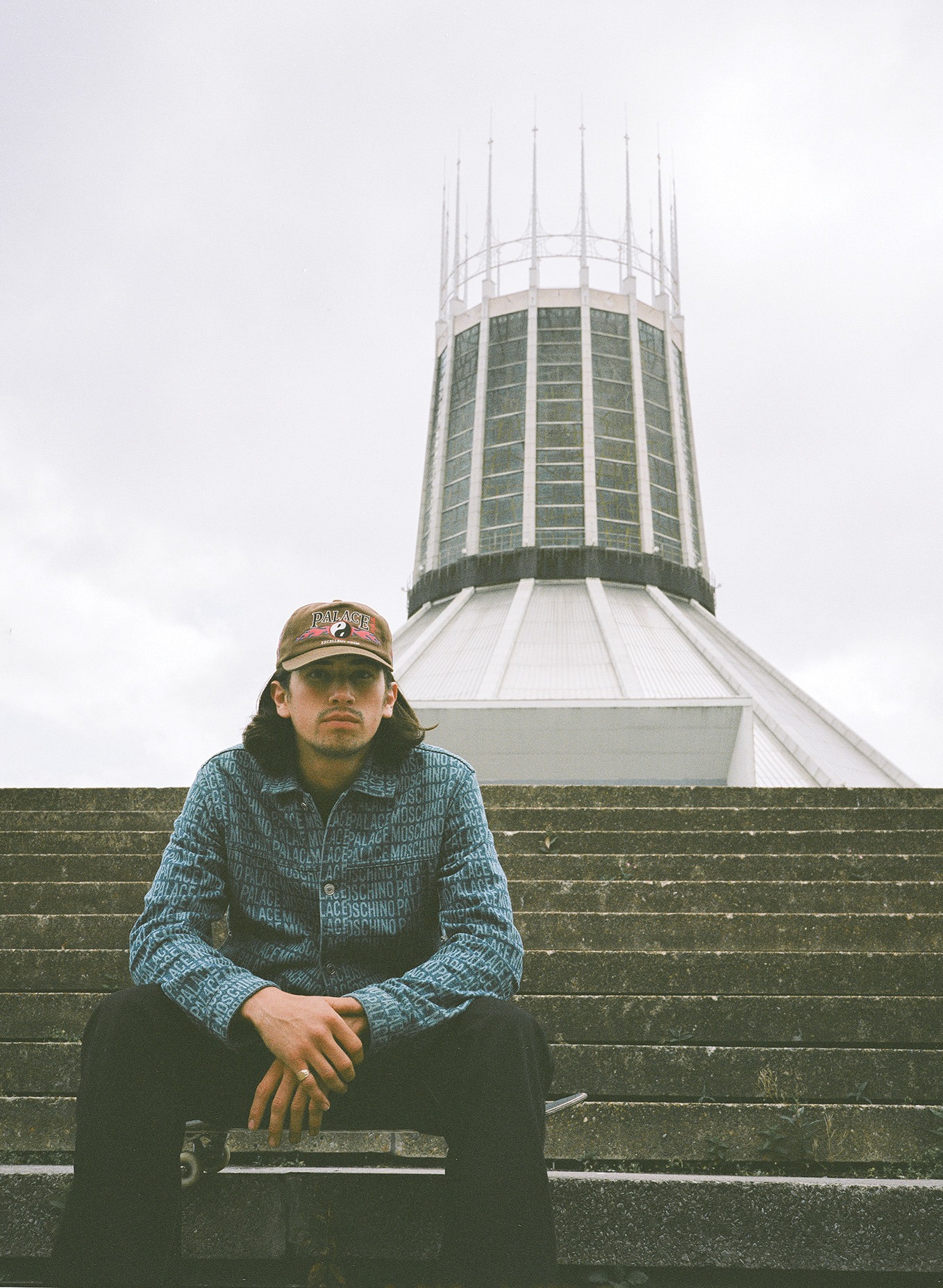 I thought that the coming of age of Charlie Birch might slow him down a bit but, obviously and as he always fucking does, he’s exceeded our expectations again leaving us with a shit load of incredible photos (the footage only causes more wide eye, throw something on the ground in disbelief behaviour) and no choice but to showcase them before he goes around one upping himself again! The problem is that he’s had however many interviews in the last few years and, whilst tempted to William Burroughs Naked Lunch all of them from other fine publications, we thought we’d just extend the captions. This may seem lazy but trying to keep up with Charlie often makes you feel knackered in the best possible way. Oh and he can give Dua Lipa a run for her money haha. Love you so much kid! 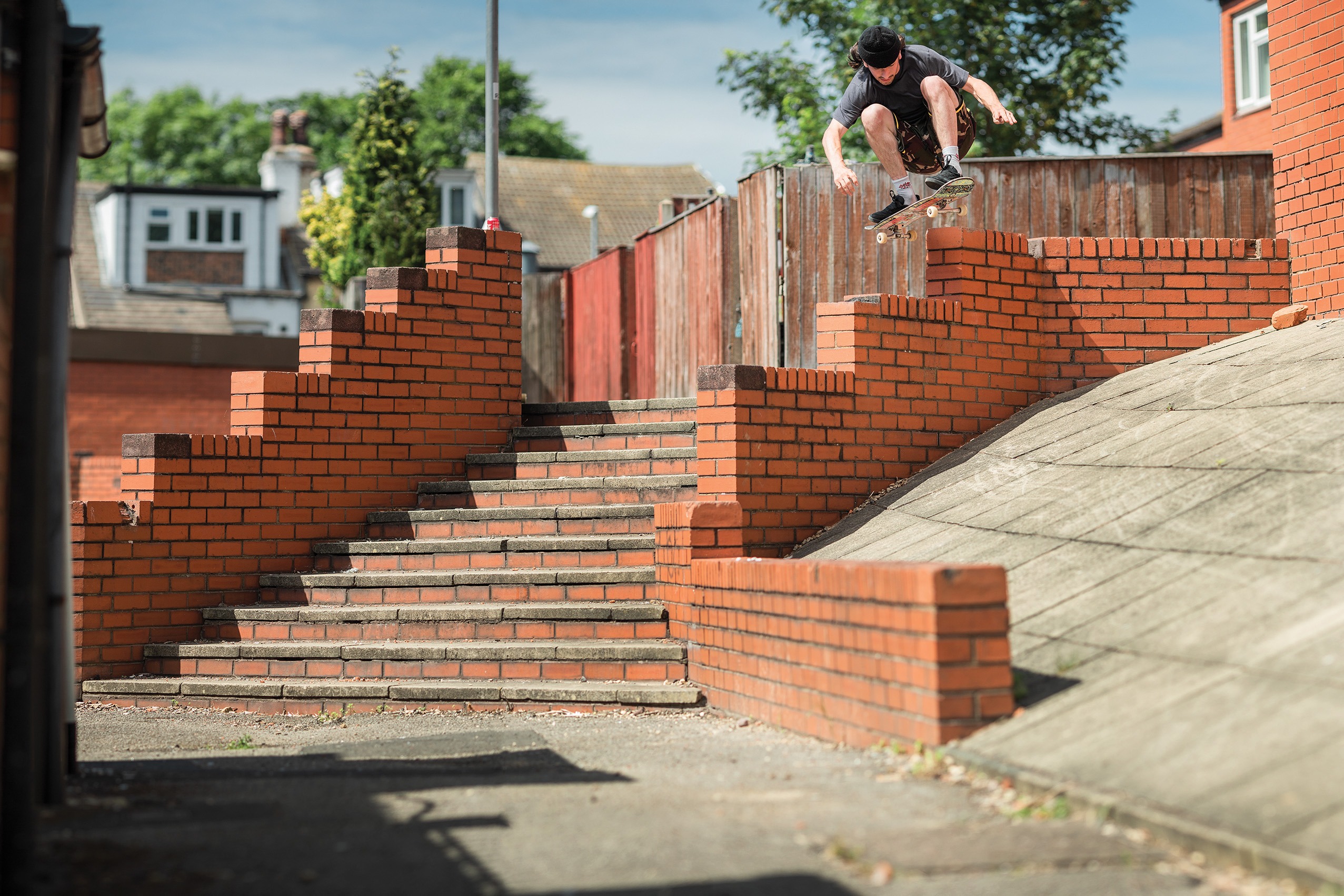 Shorts are heavily affiliated with Scousers and when wallieing sharp edged brick this identity confirms Charlie as hard as fuck, teasing the working class shapes synonymous with the working class aspects of the North West whilst effortlessly suceeding without fear or complaint. Not many people can actually claim full Scouse, as they are often on the outskirts of the city. The Birch’s fully are and what’s also interesting is Charlie’s dad is called Charlie, his brother Oliver’s middle name is Charlie and his other brother is called Harvey, which if you’re underwater (Harvey played water polo for GB) could feasibly sound like Charlie. Oh and they are all absolute legends! 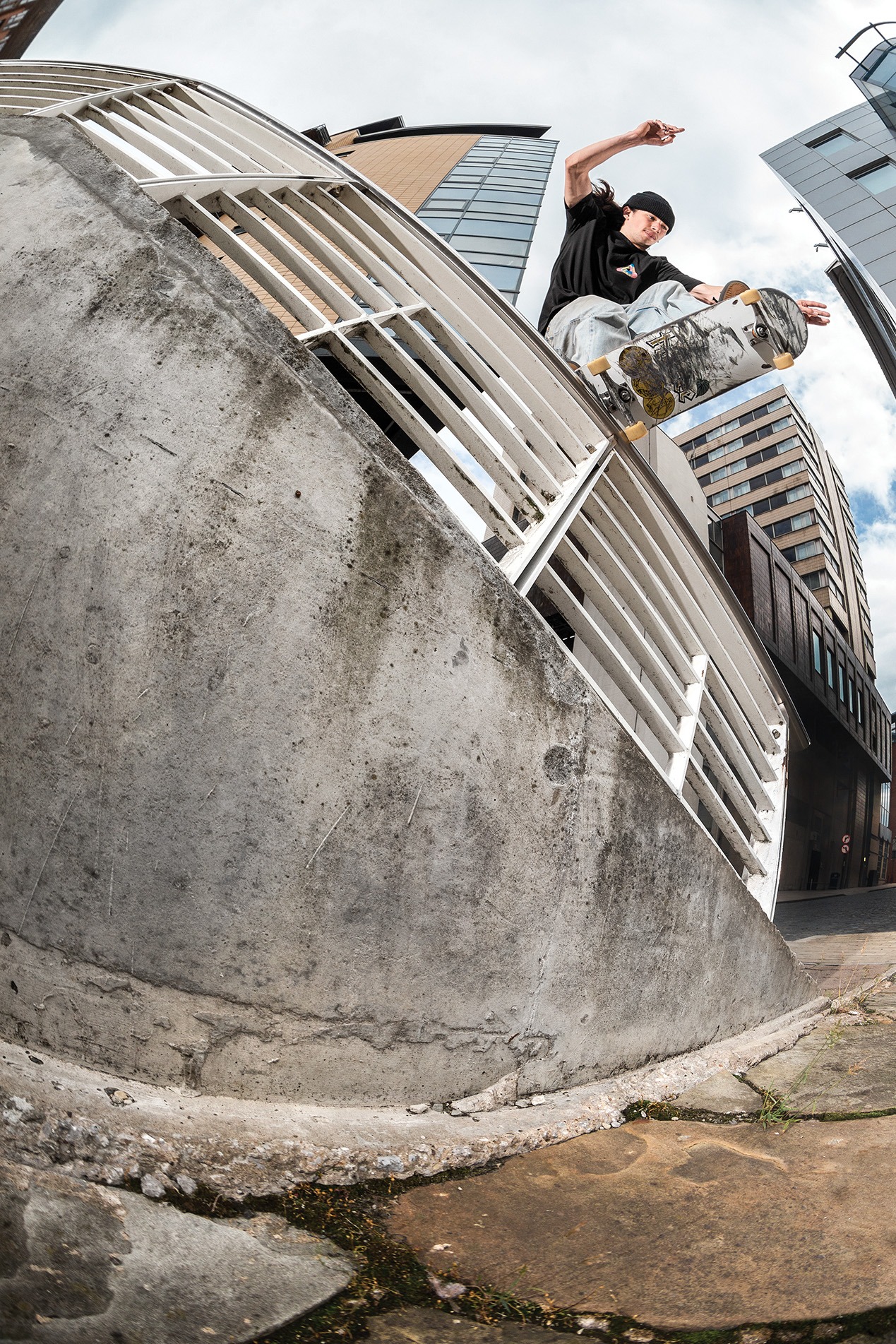 There used to be a larger handrail in the middle of this stair set that some woolyback with a green wheelie bin front boarded a decade ago, since then said person bribed Leeds City Council to take it away to an undisclosed location. The front board is incomparable to this front blunt, which is as stylish as it is terrifying, but you know how hard Charlie is; he won’t have been as scared as me looking at this photo. Either way now is probably the time to make a blunt, 4/20th of an attention span reference. When a lot of folk smoke the pillock parsley their reactions can be delayed, sometimes for hours at a time. This doesn’t stop them from answering a question which has long blown away in second hand smoke. If this were a quiz we’d get you to guess the question to the answer ‘Spanish Cheese’. For more information you’ll have to ask top lad Will Kynaston at the next Lost Art Soundsystem night. Thanks to Luke Fletcher for the intel. 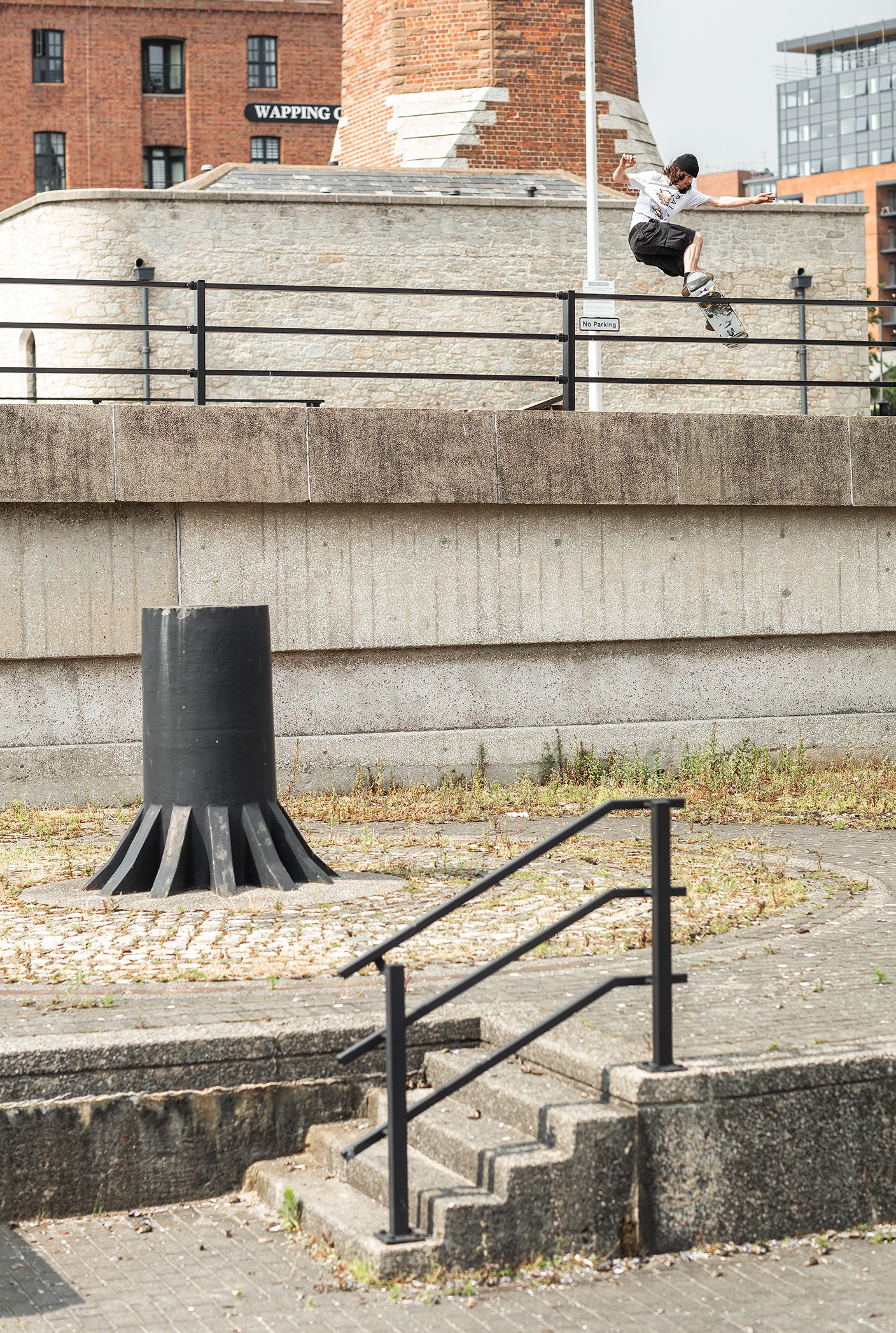 I wonder how comparable the desire to go to this location as a skateboarder in relation to a civilian is? Probably not very high on the tourist board for either. Thank the lord if anyone goes there now; man, woman, child or non gender specific folk can gather round in harmonious peace cheering that something interesting and gnarly has happened there worth celebrating. I for one intend to take my first born and tell them of the legend of Charlie Birch and that will be their first memory. We can’t really go wrong with that as a foundation, can we? 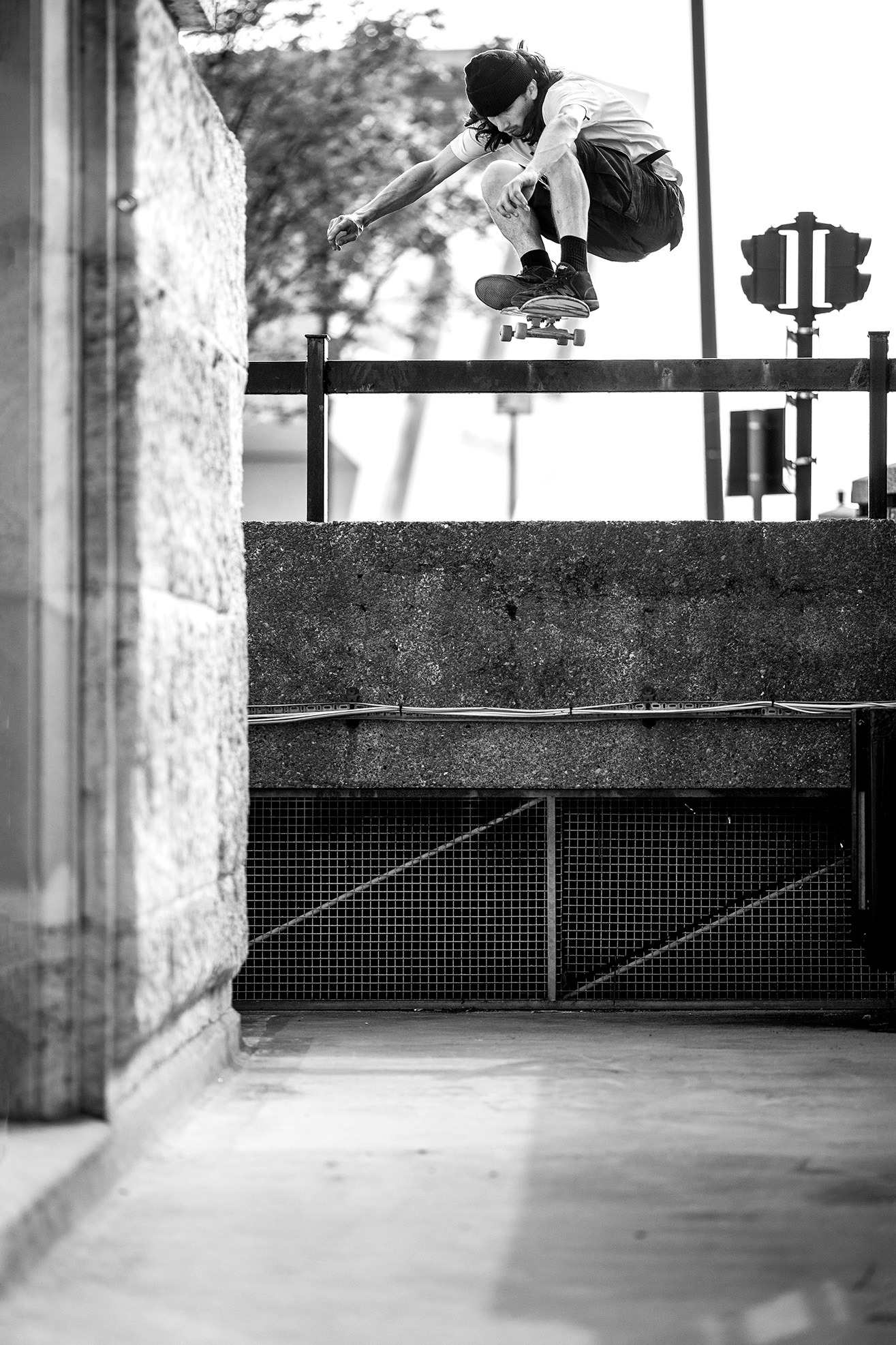 Located on the iconic waterfront of Liverpool’s Pier Head, which has so much history as well as featuring in the upcoming Batman movie. Folklore has it that the two Liver Birds atop of the building are watching over the city from danger. One looks out over the water to warn of any intruders whilst the other looks into the city waiting for the pubs to open. Back on the ground in reality this ollie is bonkers, especially as due to lack of public toilets this is often the first choice for street pissing when in the area. How many sane humans would want to drop ten or more feet to dodge piss? Maybe just Charlie, which renders this manoeuvre a literal piss take. 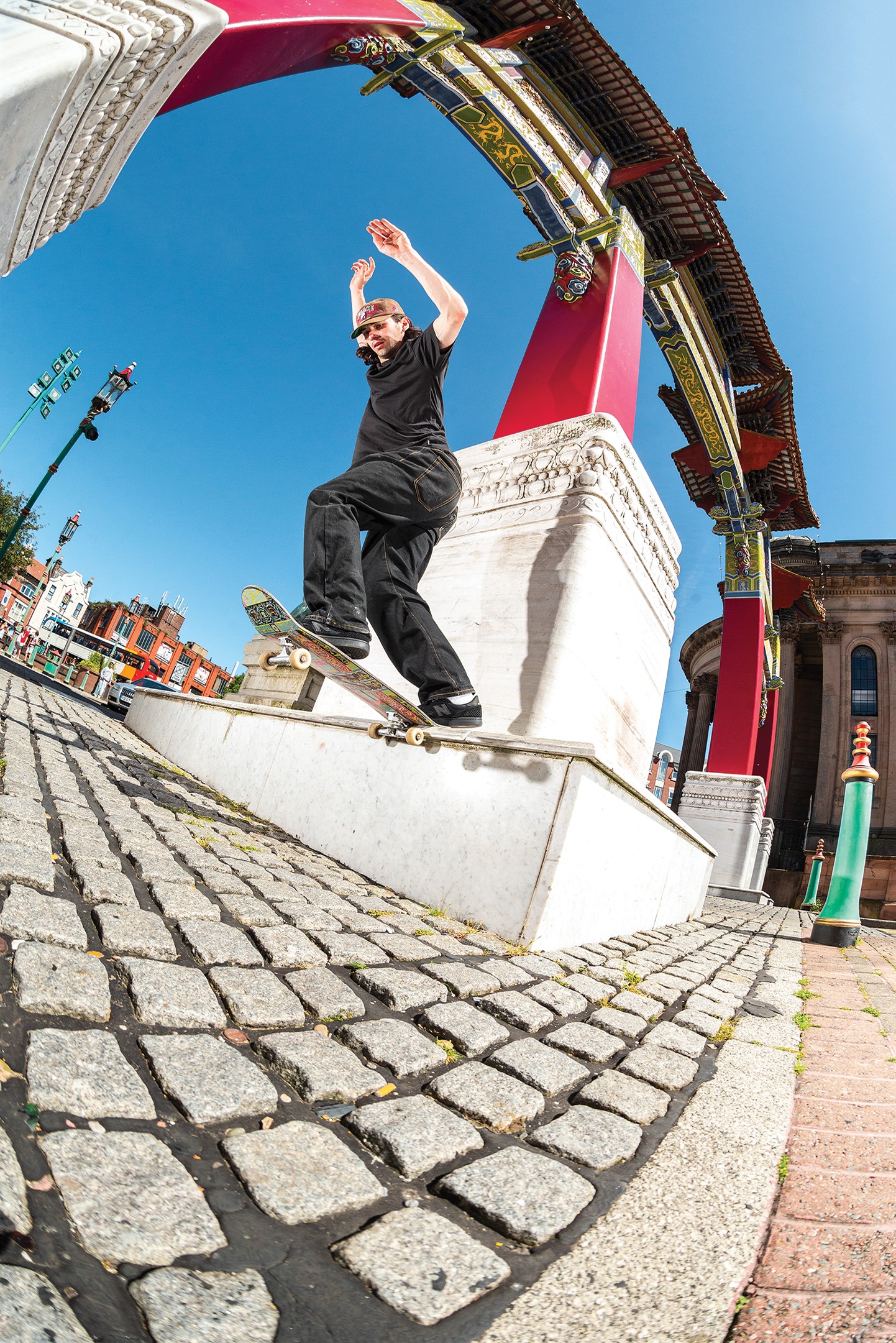 Another local hero stunt, this backside tailslide is as awkward as it looks; I’ve seen many skateboard enthusiasts gawp at the potential of this spot only to walk up the hill to three of the city’s best drinking establishments. The spot is located at the bottom of the Anglican Cathedral and is the entrance to Liverpool’s Chinatown, which is the oldest and first in Europe. With such great cultural significance, tourists can now appreciate this back tail on top of the vital necessity to celebrate the cultural impact of this fine area. Just over the road was where Banksy’s rat piece stood featured in the intro to Dave Mackey’s EAST Vapors part. It’s no longer there; once some cheeky chappies tried to rob the piece despite it being on a wall, but hey you can’t fault their ambition. 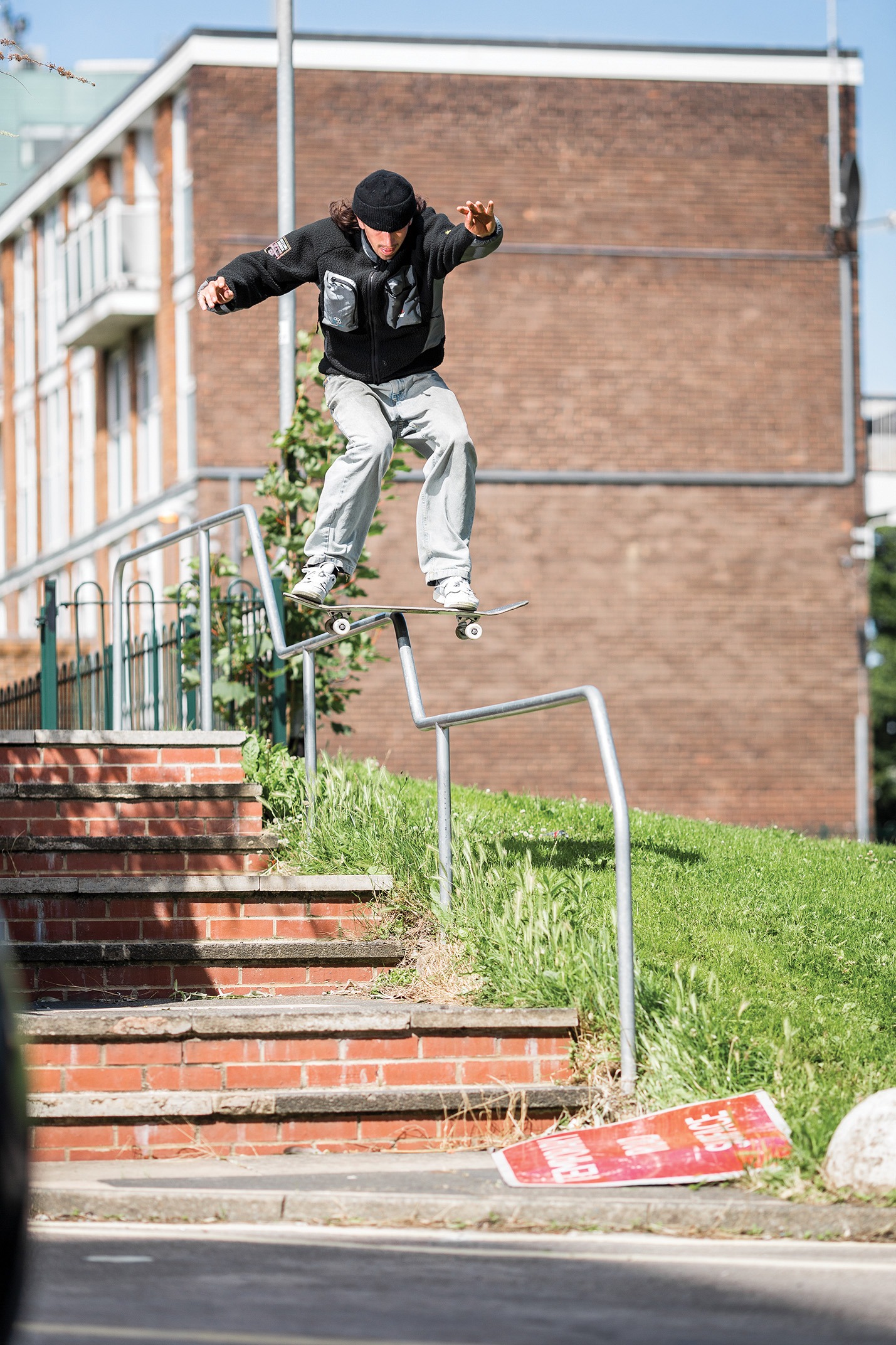 State of this – imagine desiring to skate this intimidating medley of metal shapes? On the subject of metal one of Charlie’s favourite Liverpool pubs is The Swan, where £2 pints of nondescript lager are a given, along with black and red lighting and something along the lines of Mötley Crue blaring from the jukebox. The crowd are generally middle aged all-black wearing rock enthusiasts and the fact that Charlie can be so popular in modern culture with his gorgeous Pauline aesthetic, charisma and style but also love such a place warms my heart. It’s a heat that will never go cold, I only wish he’d got to go to the Krazy House before it shut down. 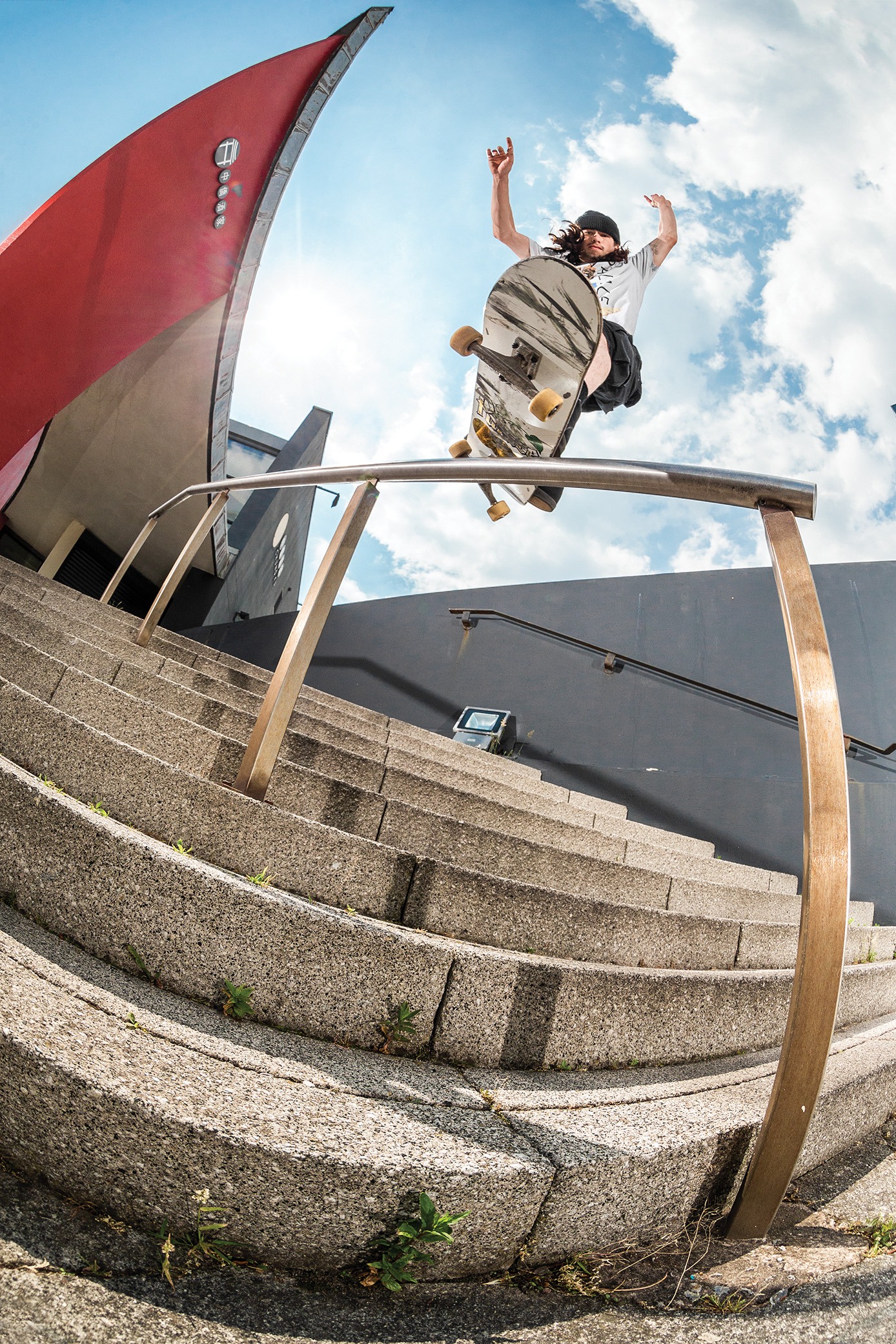 Back on home turf, Liverpool isn’t really renowned for its handrails since the green St. Johns rails – infamous from Ali Boulala’s Flip Sorry part as well as Howard Cooke, Dave Mackey and every teen to adult trying their ‘first’ handrail in the mid 2000’s as they range from four set to ten – were demolished. Since then the opportunity and desire to skate these once saturated obstacles has been significantly reduced. Thankfully Charlie has the nerve, ability and finesse to bring them into fashion, and who knows? With Palace links maybe Louis Vuitton will incorporate a round eight stair rail into a fashion walk. Also, shape on that! 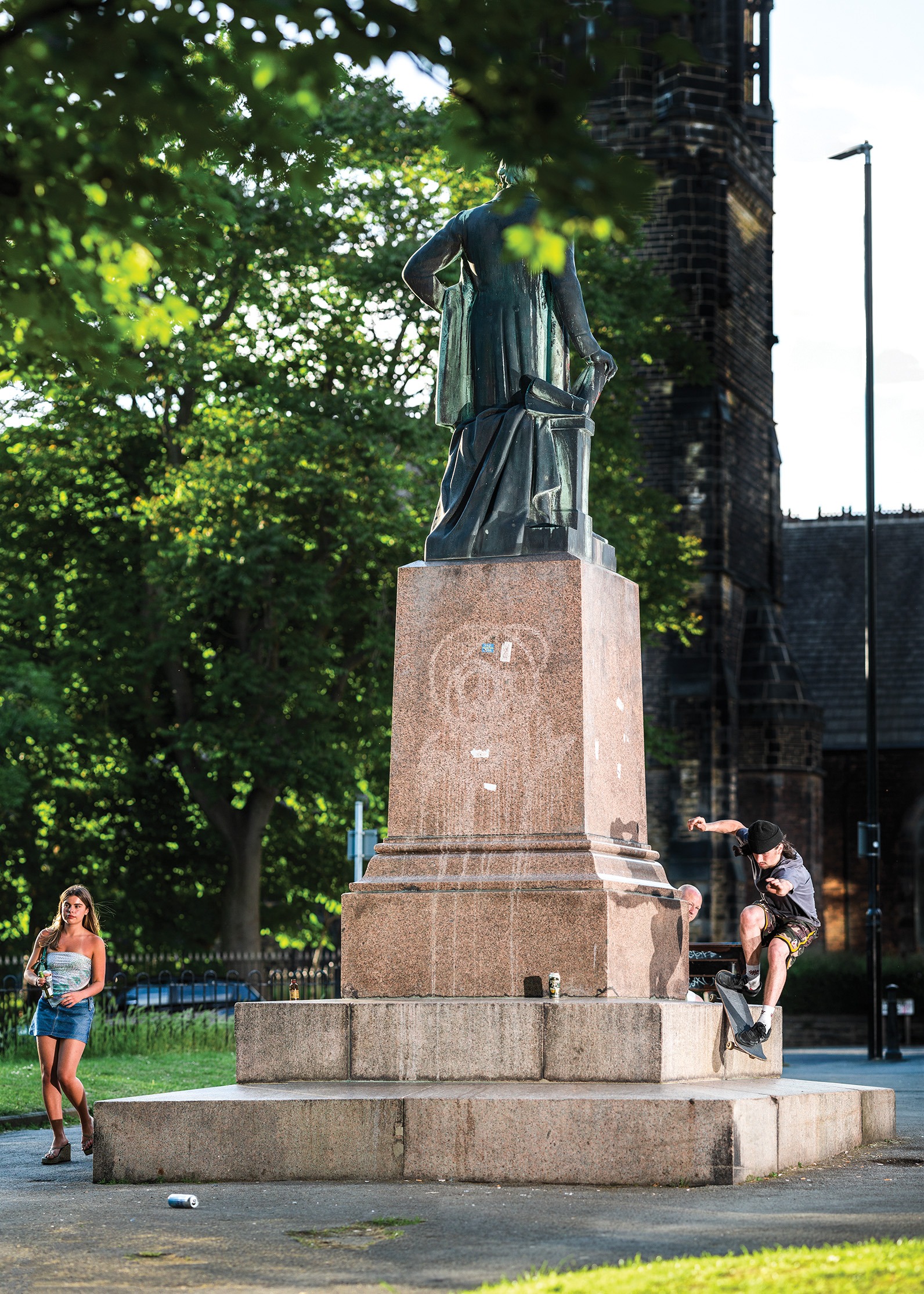 Staying on the theme of skating spots which have lesser exposure but are near more famous spots (apologies for anyone reading that aloud), this spot is a stone’s throw from iconic Leeds vortex Hyde Park and was frequently passed by Jamie the Beer Guy, who would accumulate beers from the nearby One Stop to be sold off a pound a pop to those who were seeking convenience or had left their fake ID at home. This trick is obviously a firm resident of bonkersville, with its residency confirmed further as this smith grind is actually from flat. I’ll repeat that, this smith grind is actually from flat! 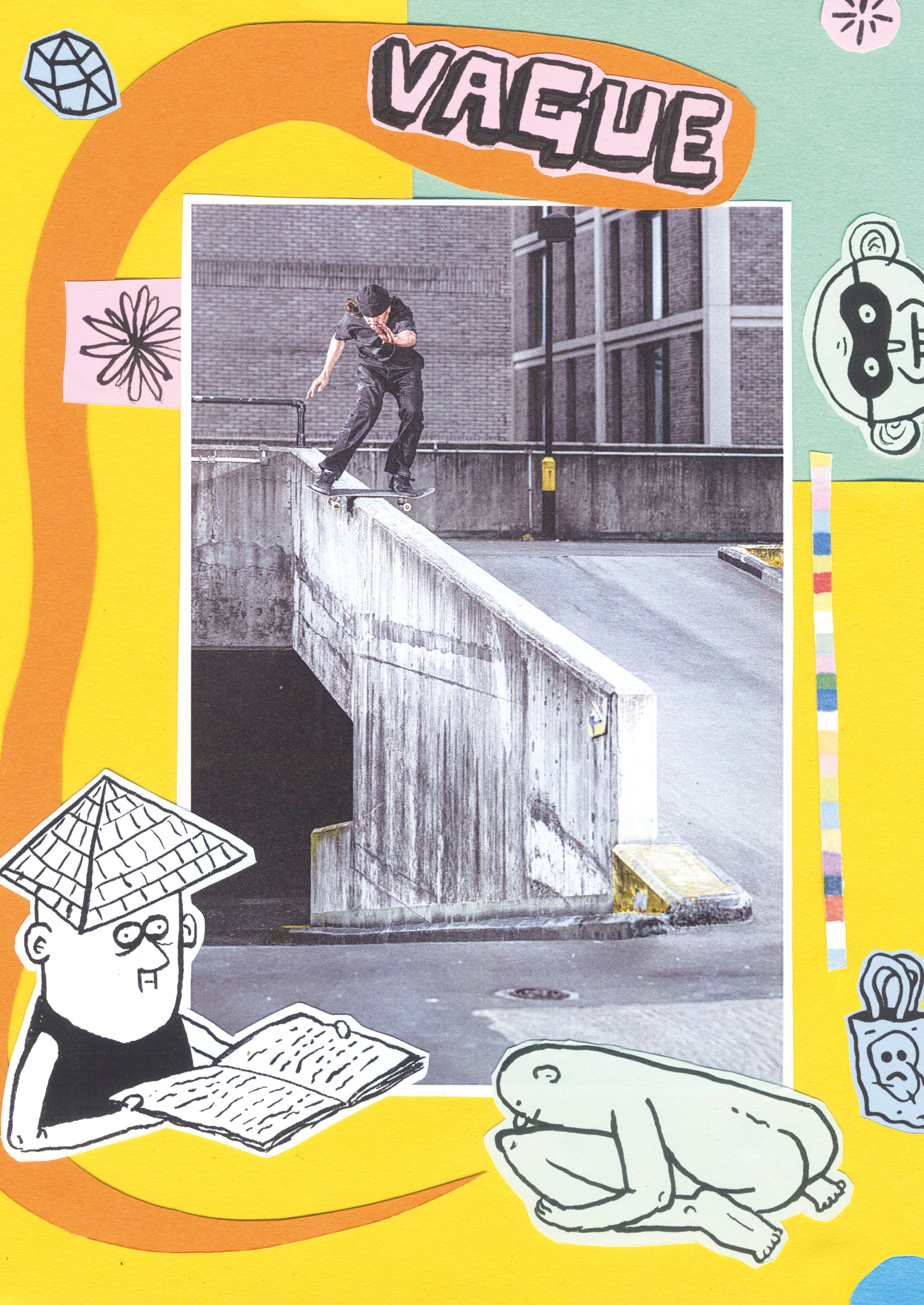 Click the cover spread above or here to order a copy!

Charlie Birch comes through with a belter part for the 'Beef Stew' video. A video filmed by Charlie's older brother Oliver Birch.

FG interviews CB for QS. "Scouser on a skateboard."