The area which makes up The Black Country (Dudley, Sandwell, Walsall and Wolverhampton) is rumoured to have gotten its name from its position as a centre of industry in the 18th century, which saw the area coated in a thick layer of the soot which gouted from the chimneys of nearby factories. While industry itself has long since left, and taken with it the processes which left behind such visible foulness – he was talking about Yorkshire, but George Orwell’s description of a “…monstrous scenery of slag-heaps, chimneys, piled scrap-iron, foul canals, paths of cindery mud criss-crossed by the prints of clogs,” springs to mind – the industrious nature of the area has clearly survived if we are to take Chris Emery’s Wolftown Skateboards crew as a yardstick. With a bevy of videos to show for nine years of pushing the Black Country scene and reminding the rest of us of the skateable gems to be found in the area, next year they will celebrate their tenth anniversary with their fourth full length release. Until then, to coincide with the release of their promo The Black Country Vol.5, we chatted with Wolftown mastermind Chris Emery to discuss Wolverhampton, curry, Noddy Holder and more. 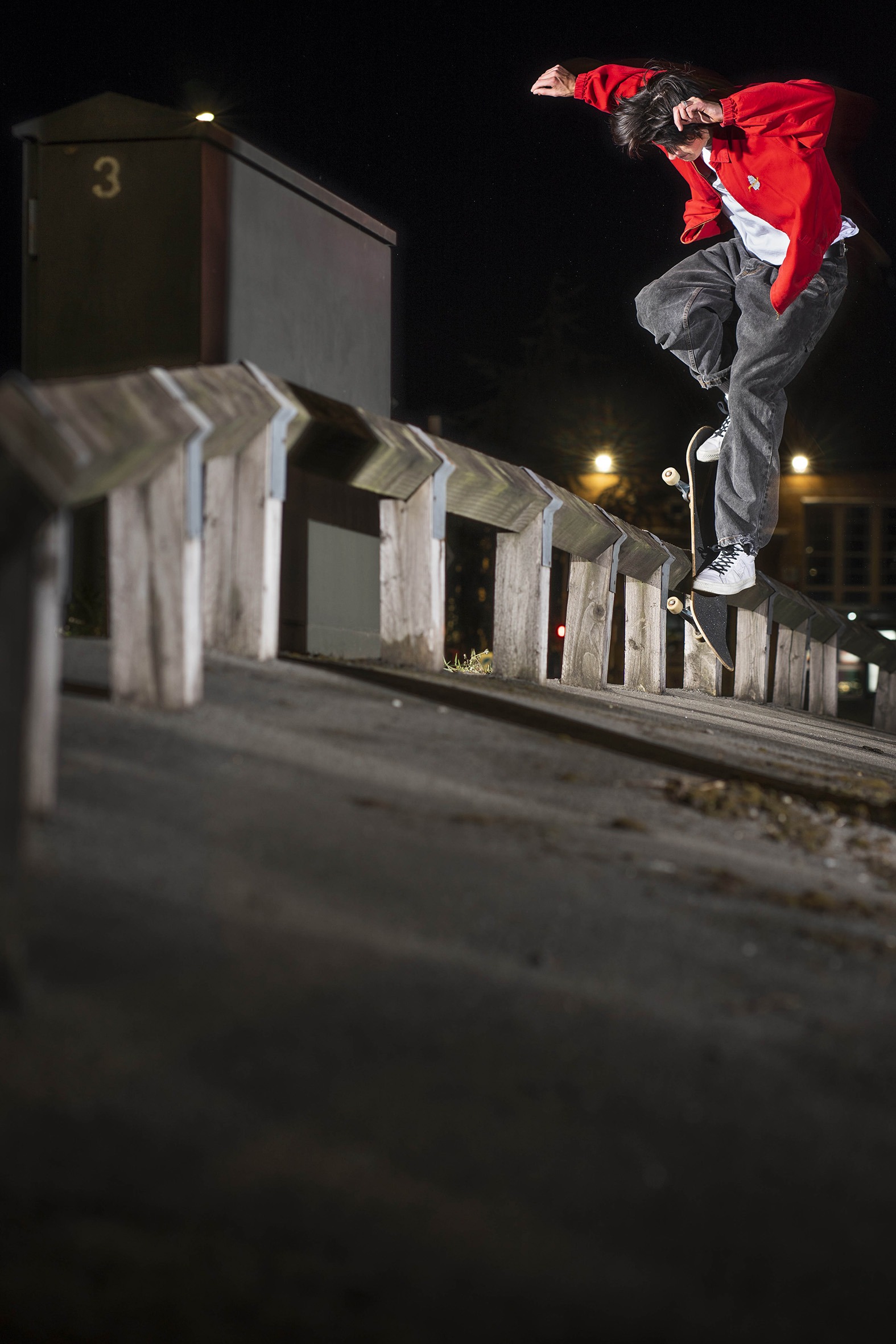 First up, who makes up the bulk of this video and who makes up the Wolftown Skateboards team? There’s ripping from both team members and friends, and I was stoked to see Ben Broyd and James Woodley in the mix – how did adventures with those two come about?

The crew featuring in our new vid consists of Henry Fox, Nick Binnington, Ali Watson, Sean Baker, Raj Sami, Joe Marks, Josh Knott, Ben Sheldon, Luke Elks, Ben Broyd, James Woodley and Lucas Healey. The Wolftown family has grown a lot bigger than that since I started it 10 years ago, but some of the guys weren’t able to get any footy for this new vid.

I recently put Alex (Ramsell) and (Anthony) Ackers on as the first official riders of the Wolftown Skateboards team. They’ve been killing it for a few years now and have a lot to offer. It was a no-brainer really.

I think Nick Binnington brought Ben on a filming mission one day. He’s like that older brother you never had! He’s fit right into the family since we first met, it’s always good to have him around on filming missions.

I was introduced to Woodley through Rob and Henry at Ideal one time. The guy doesn’t stop. He brings a hell of a lot of energy to the session. 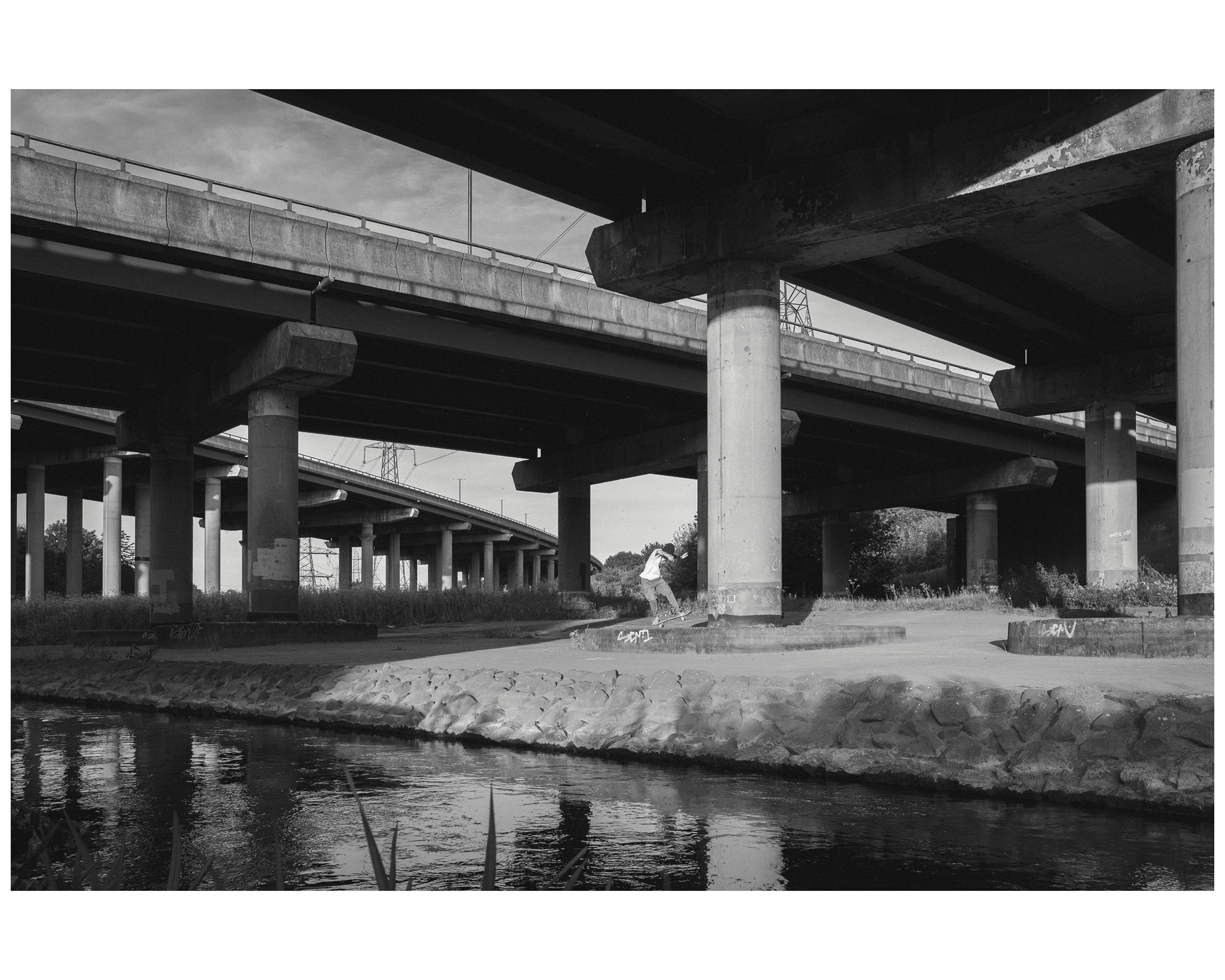 As far as I remember (and feel free to correct me here) there has never been a full Wolftown Skateboards interview – so, assuming I’m not covering well trodden ground, what brought about the company in the first place? The most prominent Wulfrunian to come to my mind immediately is Nick Sharratt who runs The Palomino – has his influence left a particularly literate scene flourishing, and did the team form from the inner circle of a skateboarders’ book club? If so, is every new team member inducted with a reading of Herman Hesse’s Steppenwolf?

Wolverhampton has had a massive scene as far back as I can remember, even before I was born! No one was documenting the scene back when I was a kid, at least in the direction I wanted to push it, so back in 2012 I bought a VX off my friend OJ and it all started there. I wanted to start filming and releasing full length videos, doing things properly.

Nick, Benny, Jagger and all the OG Wolves crew have left a legacy for sure. It’s not exactly a rudimentary past they’ve scribed into the history books either. Saying all that, it’s definitely driven me to film more videos and push Wolftown’s scene. I’ve been lucky enough to include Nick and Benny in some of my videos too. It’s amazing they’re both still killing it on their boards.

Haha. The current initiation to be on the team is to film an NBD at Wolves Civic and know every lyric to Duran Duran’s ‘Hungry Like The Wolf’, although I think I may have to change it after what you’ve said! 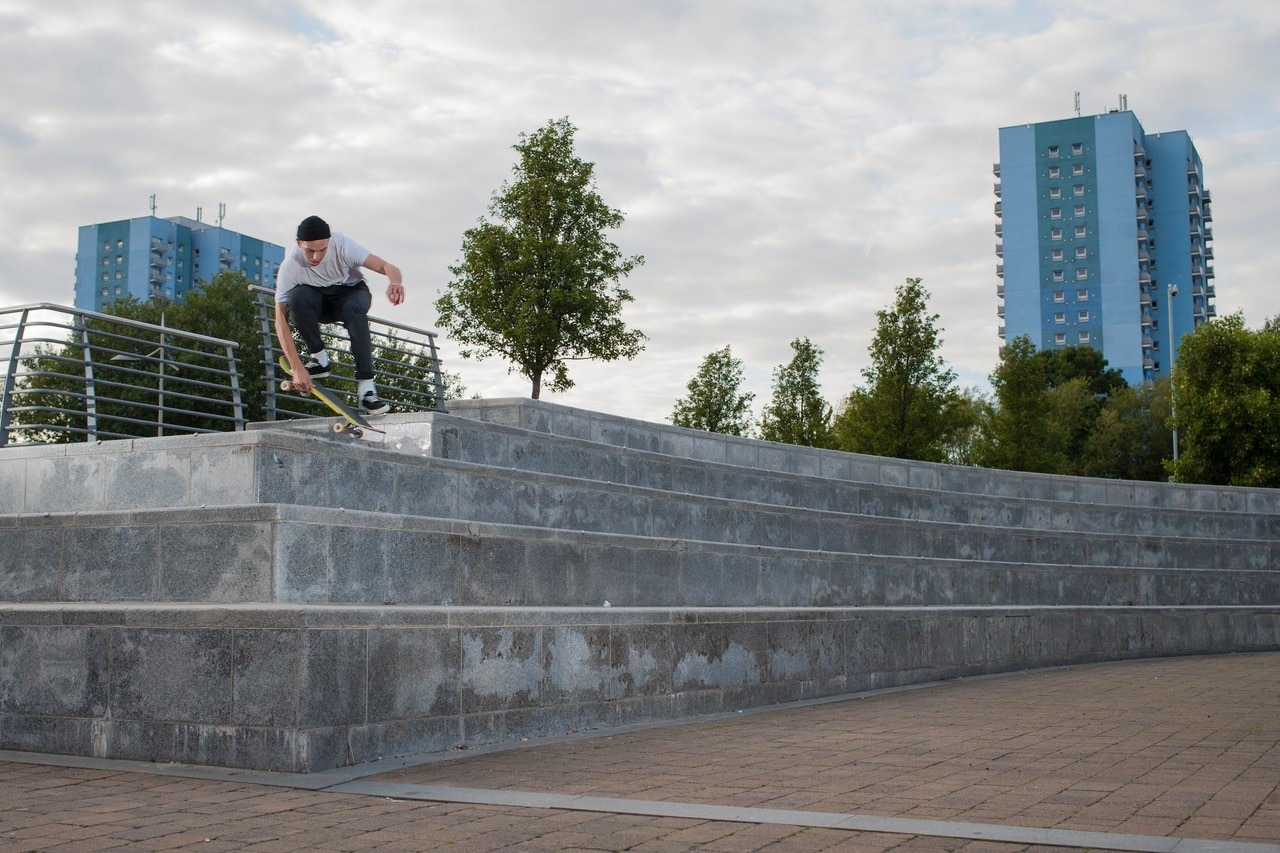 It is your 10th anniversary next year, and you’ve been pretty prolific output wise since 2012 – have you been racking up secret Civic Centre NBDs since way back then and have them saved for a full Civic-based video next year? As the city’s most iconic spot, is it as hard to skate as it looks? And what are the gnarliest things you have seen go down there over the years (that aren’t spoilers for the video I just made up)?

Back in 2019, I premiered The Black Country Vol. 4 – Reflections. This short video was filmed strictly at Wolves Civic. It was exhibited at Asylum Art Gallery, alongside our first ever deck release by James Nash (@jamesnashcomix), a photo gallery and a publication by Walsall Dave (daveharehenriksen_). It was certainly full of NBDs!

It is harder to skate than most plazas. Some people find it more fun than the average spot. I guess it depends on your style of skating. If you land a trick at Civic, it’s quite common you have that trick ‘down’, if you know what I mean? Ali’s frontside wallie down the seven has got to be up there. He filmed that for Wulfrunian back in 2017. Also Henry’s (@gullymandem) Mayday line for Reflections.

We are releasing our fourth full-length video in 2022 to celebrate the last ten years! 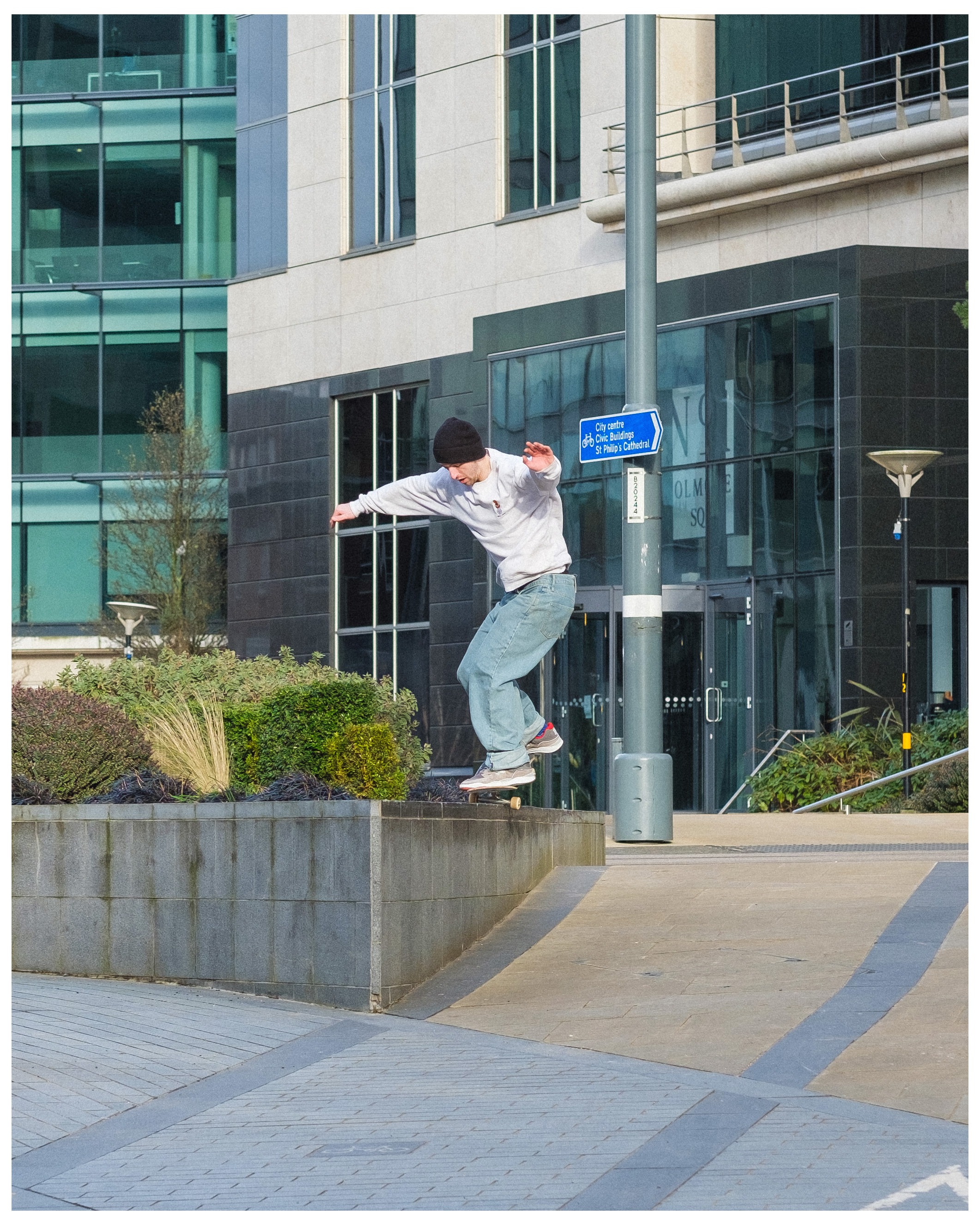 And over those years the city has seen a fair bit of regeneration, right? How has street skating in Wolverhampton been affected by this, whether that be in terms of architecture, bylaws or other?

The architecture in Wolverhampton has had very little change to it for decades. Due to this, it has forced us all to be more creative with the spots we are skating whether it’s hunting for new spots more or approaching the existing spots differently. Police and security presence has definitely decreased drastically in the last five years too, so we’ve had the boot less.

So what other spots are a must visit for those checking out the city skatewise? And, in fact, outside of skateboarding what would be the first things you would show a new visitor to the city?

Plaza-wise, Wednesfield Blocks is a classic spot to hit up on tour. Other than that, there are a few unique spots like the Lighthouse manny pad, the fullpipe and the blue ride-on rail.

You could become a true Yam-Yam and visit The Black Country Living Museum, followed by a bag of orange chips for tea. If you’re more outdoorsy, there’s a hell of a lot of canals with a kind of industrial landscape to explore. Our neighbouring city, Birmingham, has more canals than Venice, so you can imagine how many there are around the area. 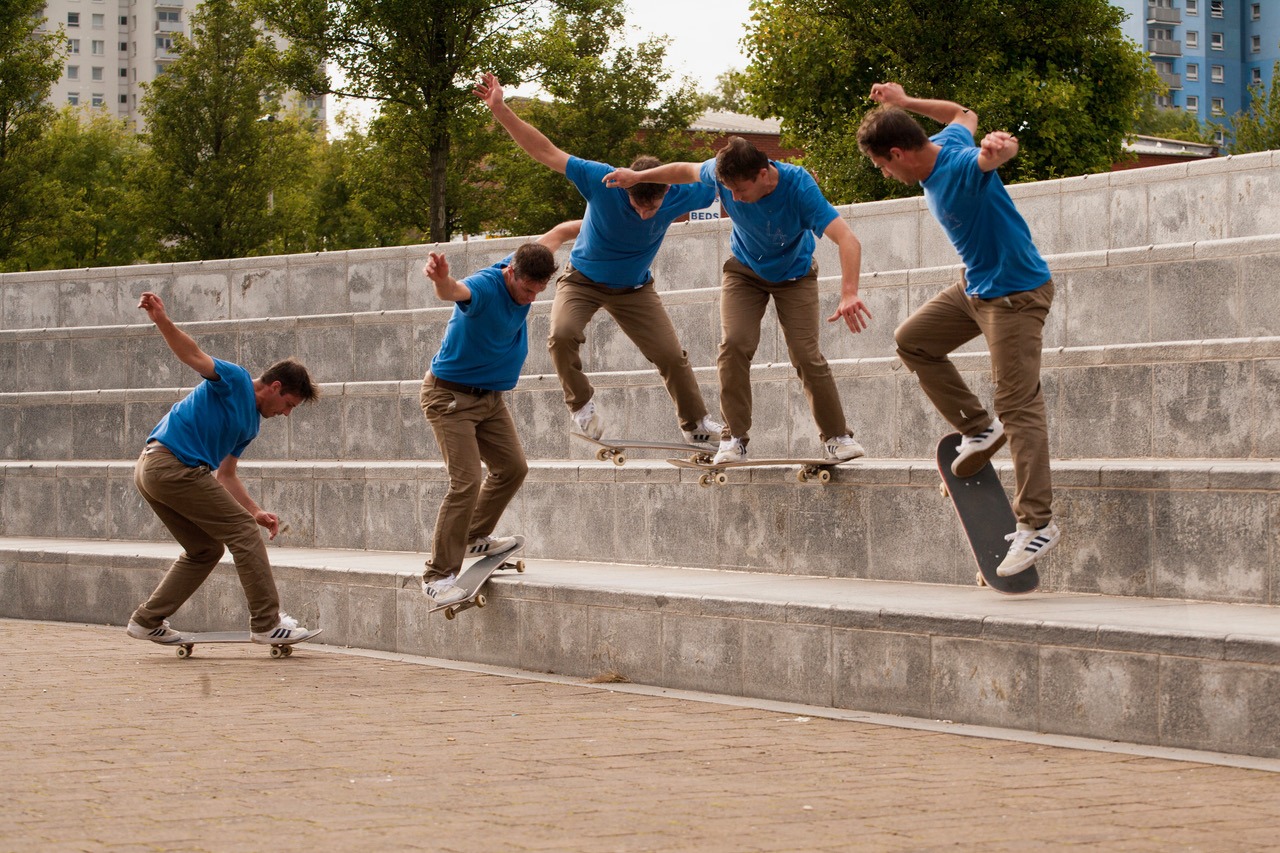 Wolverhampton’s best… and why:

Pub – The Yew Tree Inn for a good desi-pub. You’re certain to get a good, classic Black Country curry at this place.

Cafe – I’ve always liked Zuri’s for its Indian takeaway, it’s right next to the train station so it’s pretty central too. I was there a lot during my days at uni.

Live music venue – The Civic (when they decide to actually finish repairing it). 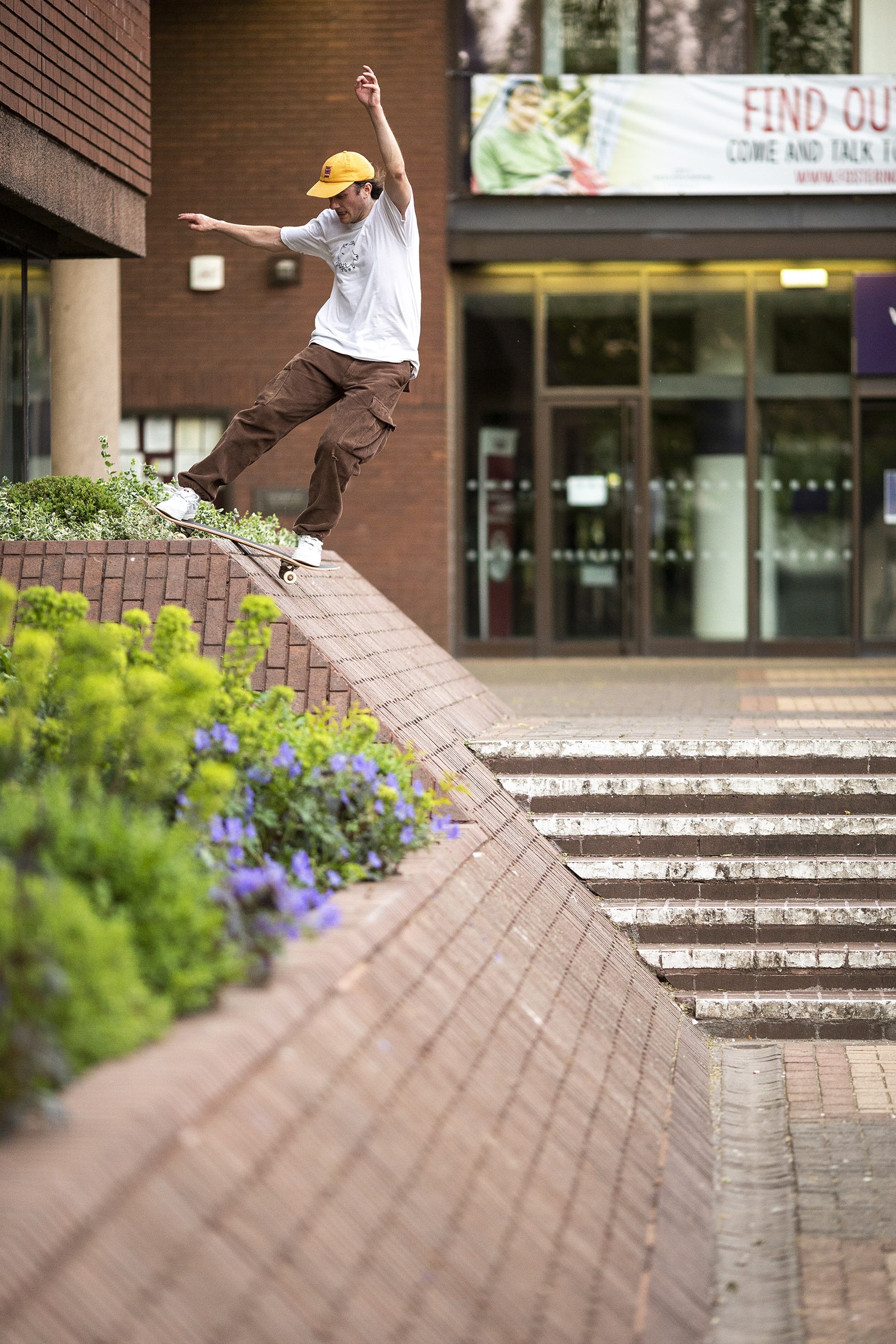 Slade are probably Wolverhampton’s most famous sons and I’ve heard that, when Bon Scott passed away, Noddy Holder was offered the opportunity to front AC/DC but passed up on it, hence Brian Johnson getting the position. If you had to pick one person on the team to front AC/DC now, who would you choose?

Jobie Morris. Whether it’s his power, or his karaoke skills, he will always provide. A true crowd pleaser.

You may has seen us upload a couple of sections from Wolftown Skateboard's 'STRAY' video in the past. Well this Wolverhampton full length is now online!