Hailing from Mannheim in SW Germany we are stoked to put out a part with Arrow and Beast’s very own Mark Metzner. Alongside his ‘Backlands’ video part below you can read some words formed from an interview conducted by Jono Coote.

There is a certain buzz peculiar to a port town, a kind of cosmopolitan lawlessness as a result of their place in both geography and culture. It is a buzz reflective of a constant influx of different people, races and cultures, and reflective of the port as an entrance point for goods both legitimate and illicit. Cultural output from Moby Dick to The Wire has painted the port as a lawless, brawling bastard spawn of the great capitalist venture. One of cinema’s greatest and most blatant rip offs saw German auteur Werner Herzog add a colon and the words ​Port of Call New Orleans​ to his 2009 ​Bad Lieutenant.​ The complaints of OG ​BL​ director Abel Ferrara were met with protestations of innocence; “I have never seen the films, but I would like to meet the man,” claimed Werner. “I have a feeling that if we met and talked, over a bottle of whisky, I should add, I think we could straighten everything out.” If that meeting ever happened, I imagine it taking place in a dimly lit portside bar people with all manner of human flotsam and jetsam.

While Mark Metzner is a skateboarder from the port city of Mannheim in South West Germany, as far as we know from the following interview he doesn’t occasionally hallucinate iguanas or indulge in illegal activities beyond the odd bit of trespassing in the hunt for new terrain to skate. Disappointingly, for someone who planned to run this interview along the lines of relentless comparisons with Nic Cage’s character in the aforementioned film (even if they didn’t really make sense), he isn’t even involved in a destructive relationship with Eva Mendez. In fact he seems like a fairly pleasant person, with his work life divided between bar work and teaching kids PE and a passion for cooking and laid back music (“no hard German techno”, he is keen to make clear) in his spare time. 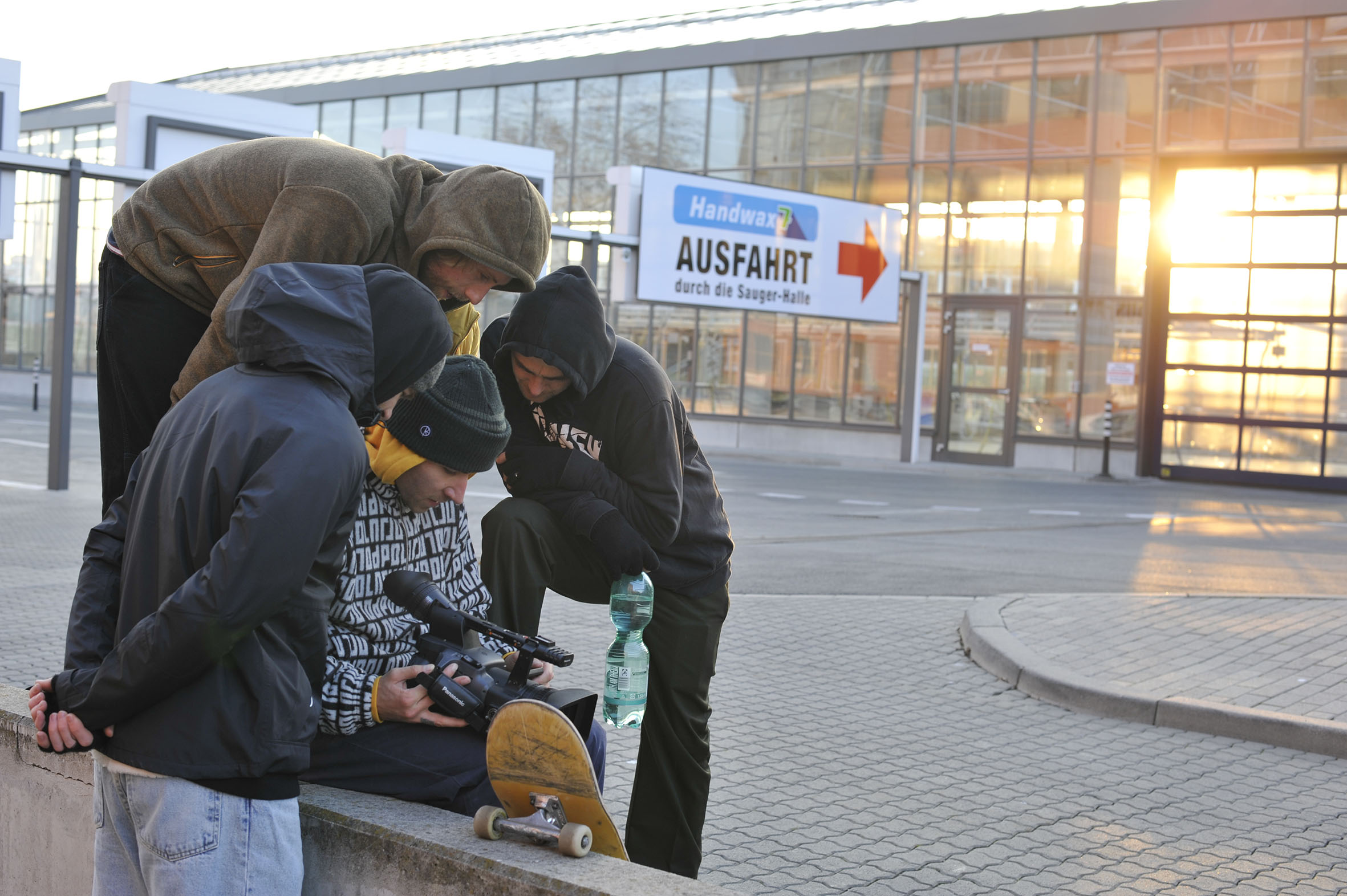 Never underestimate, however, the bad influence that the right surroundings can have on anyone. The dark corners of the dockside industrial sprawl are as amenable to shady dealings as to finding unusual spots and the immediate presence of criminality is inspiring to any dedicated four wheeled trespasser worth their salt, most of whom won’t fail to have a good time when dropped into this setting. I have fond memories of skating round Copenhagen’s docklands at 3am, pissed out of my mind and having forgotten my way back to the hostel with Blitz blasting through my headphones. The images of wind turbines and industrial portside spots which pepper ​In Search of the Miraculous​ are seared into my gray matter (as is the image of Pontus prancing around waving his willy about while draped in the Stars and Stripes) as indelibly as Nic Cage asking “What are these fucking iguanas doing on my coffee table?”

Mannheim is home to the second largest river port in the country, is a major centre of industry and was the focus of intense rebuilding during the 1950s and 60s, meaning that its urban sprawl has much to offer a skateboarder with a keen eye; and Mark clearly has that. Spending much of his free time combing the car parks and loading bays of the docklands, hunting down untouched spots on which to lay urethane, his driven approach to spot hunting – alongside a talent for skating them afterwards – has seen him catch Pontus Alv’s eye. As well as being flowed Polar boards, his talents have also found him no complying his way through pairs of Converse CONS, riding for Stuttgart based SOS Arrow and Beast and getting hooked up with a bevy of sponsors through 24/7 Distribution. I ask him what it is about Mannheim’s architecture that matches his style so well.

“​Mannheim is, after Stuttgart, the second biggest city in southwest Germany. I really like it because it’s rougher as a city and the spots are also rougher. You have a lot of working class people here and also a lot of industry, like the inland port which is the fourth biggest in Europe. I really enjoy biking around the port or the industrial site and looking for new spots that nobody has ever skated before. You really find a lot of shit out there.”

Growing up in Oldenwald (“kind of a backland, with a deep forest and a lot of nature…there is not much going on, but you definitely have your peace of mind out there”), after finishing school he spent time living in Munich, Berlin and Stuttgart to enjoy a faster pace of life. Mannheim offered up a happy medium, where “the skate scene here is not too big so it’s a little bit more familiar,” and with good connections to other cities – “I can be in Stuttgart in 30 minutes, Frankfurt in 40 minutes and Paris in three hours.” 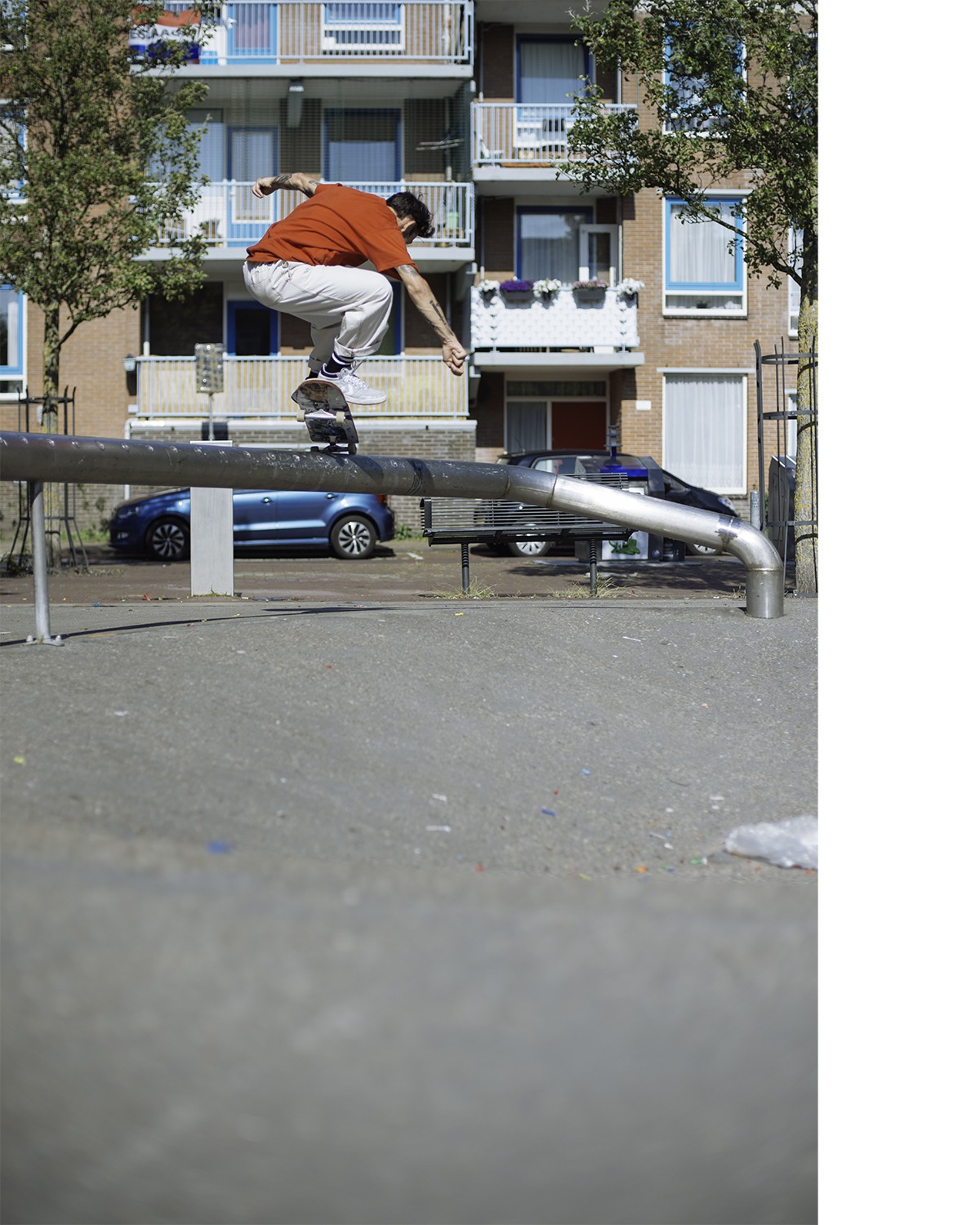 It was during his time in Stuttgart that he started riding for Arrow and Beast, who have held it down in the centre of Stuttgart since 2010, and he is quick to highlight what an integral part they have played in pushing skateboarding in South West Germany;

“​The shop does a lot for the local skate scene…they organize a contest every year at the museum for urban culture called Palais du Beast, they fixed the fucked up ledges at the local spot in Stuttgart called Paulinencurbs, we do team trips every year, they helped to build an indoor skatepark called Stuttpark – then there’s the events, video premieres and parties…one day there was a video premiere at the old shop and the guys surprised me with a welcome box. I was really stoked, Arrow and Beast was the craziest shop for me back then and still is.”

Then came a hook up with Polar through the shop-affiliated Beast Distribution after Oli Merkenbach spoke with Pontus Alv about Mark. A few mutual connections sealed the deal, including a friendship with Fabian Fuchs “…who did a lot of motion graphics for Pontus’ videos. He also was down to pimp my part with his pencil work and did an amazing job in my eyes.” This new part, which you can find embedded into this article, came about over a year of low key missions exploring the most obscure nooks and crannies of Mannheim’s industrial zones, often accompanied by photographer Fabian Reichenbach – some of whose photos you can find accompanying this text. 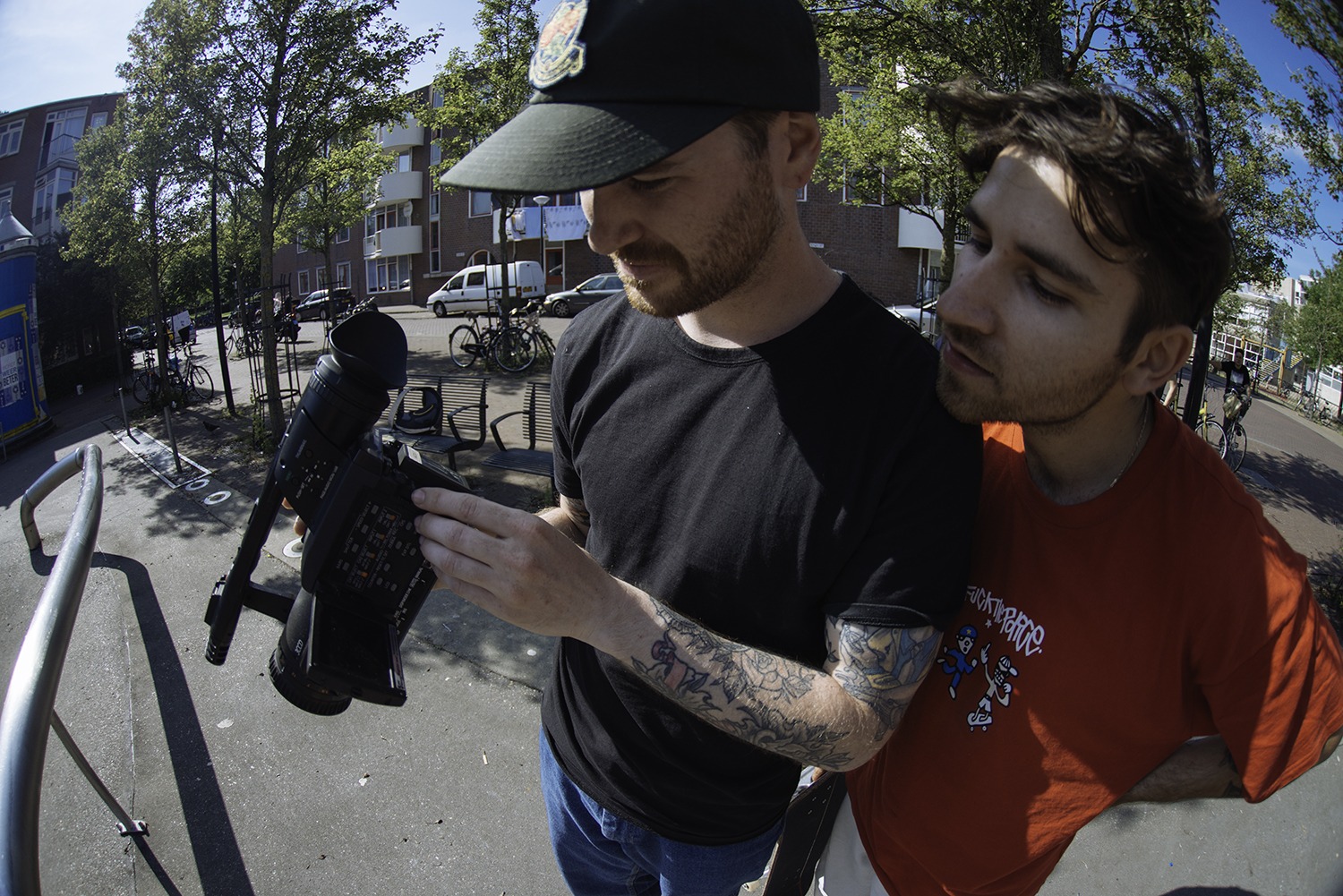 “We always try to find new stuff. He knows a lot of spots because he’s a skate photographer and I’m always down to find new shit to skate so I think we work really good together. During the lockdown this summer it was nice to skate spots that are normally a crazy bust.

I really enjoy skating with the crew, but when I’m out for spot hunting and filming missions it happens a lot that it’s just a small group; a filmer, a photographer and me. I really like to skate weird spots and not too many people are down for that kinda stuff. Right now during Corona we keep it really small anyway, so not more than two or three people on a mission.”

Despite (or perhaps because of) a need to keep the crew small, footage has been racking up on the camera Mark bought at the beginning of lockdown. Alongside a ​new clip over on Place Mag​, the next project is always just over the horizon;​ ​“I think Fabian is pretty busy at the moment, he just became self employed and has a lot of work. But we are always planning new stuff together and are working on some new stuff already, so let’s see what the future brings.” 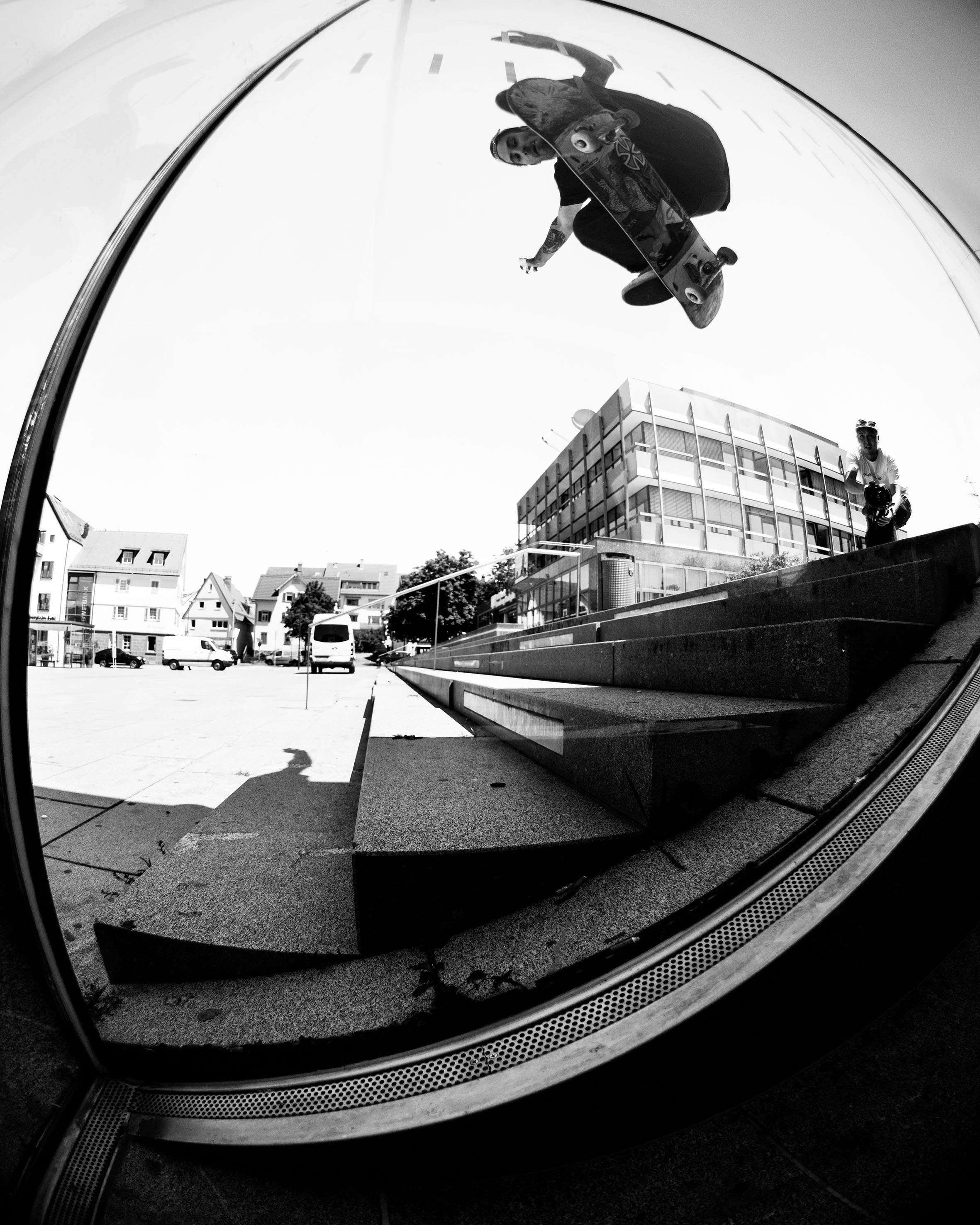 With the Northern European weather to contend with, the footage was topped up with a trip to the warmer climes of Los Angeles courtesy of Dylan Witkins and a friendship kicked off by a Foundation Skateboards European tour.

“He said that if I ever went to LA I could stay at his house…a couple of months later I was on the plane to LA. I basically just wanted to hang out there and enjoy the Californian lifestyle, but in the end of course we went skating a lot. It was always a dream to go there and I really have to thank Dylan for making it happen.”

Despite the heat taking some getting used to (“There’s one line in my part that we filmed in Walnut on a really hot day, it was easily over 40 degrees and I tried it for two hours. I almost collapsed because of the sun,”) the trip indulged Mark’s predilection for AVE worship and skate tourism was built around visits to architecture bearing the Alien alumni’s stamp; “…we went to some classic spots he skated, like the one where he did a bunch of wallie to grind stuff in Propeller – sadly a car was parked there, so we didn’t get to skate it.”

With long distance trips looking unlikely in the near future for obvious reasons, talk of travel moves on to Mark’s Romanian heritage. I mention ​Jim Craven’s trip through Romania and Bulgaria​ back in 2018, wondering if he’s ever thought about making a trip out there to skate.

“I would love to make a trip there again and travel around if it’s possible soon. I visited my relatives and grandparents twice a year in Romania, sometimes I brought my skateboard but the spots are super rough and I was a lot younger. The last time I was there my uncle got married and we got really drunk at the wedding party, I blacked out on homemade hard liquor.”

Until the next trip Mark can be found dividing his work between a bar and a school, where he teaches PE; “I try to motivate them to go out and do some sporty activities, even skate if they want to, rather than staying in the house all day and getting brainwashed by the television. Nowadays the news is full of negative subjects, it’s poison for kids. I try to teach them to think positive.”

Fellow Polar Skate Co, Volcom and Vans rider Jeroen Bruggeman has banged out a quick part for us along with an interview for y'all to enjoy.