After Greg Conroy started Serious Adult around 5 years ago, they’re output has always stayed true to spot variety, fun and great skateboarding. After exploring every conceivable crevice of South London George Toland went on an adventure to South America. On this occasion he went to good friend Seb’s hometown of Queretaro in Mexico where he obviously filmed and most certainly bonded with all of the characters who make up this scene. Despite VX’s always breaking, wifi so slow that in the past he’s had to mail usb sticks to get them uploaded to websites as well as being partial to certain herbs, George’s productivity and output is net level. Enjoy the fruits of this venture and soak up the radness.

I met Sebastián (Lemus) for the first time one freezing night at Southbank in January 2018, coincidentally after answering a DM he’d sent earlier that day to the LLSB insta saying he’d just arrived from Mexico and wanted to know how to get to SB and a couple other parks. 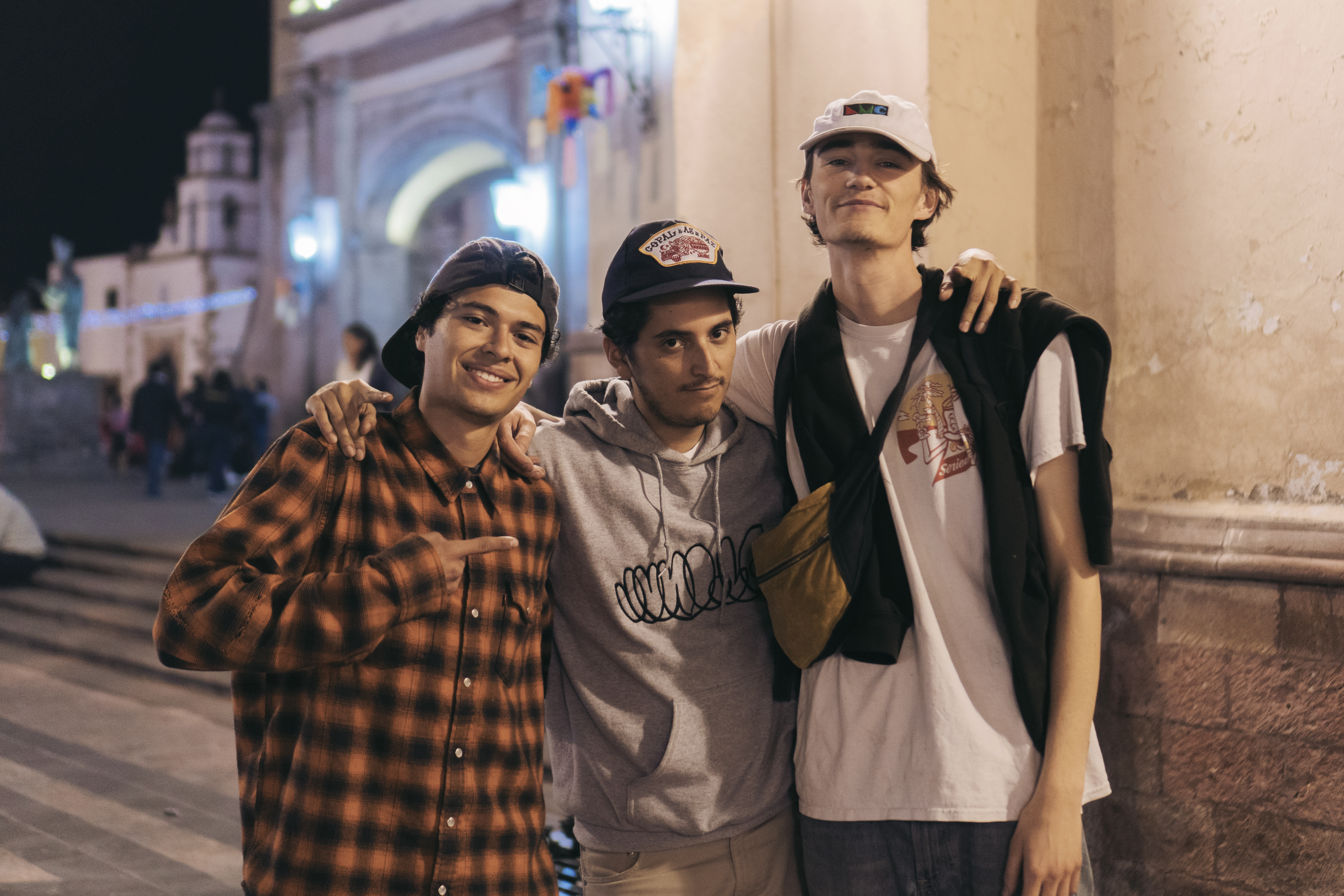 Seb, Joel and I, Queretaro ~ Photo by: Carlos Perrusquia

Seb, Joel and Topo took me in like a brother, can’t thank those boys enough for the best 3 weeks in Queretaro – yeeeaaa mandrake!

After witnessing a couple of flip backside nosegrind reevs on the flat ledge, Greg Conroy and I quickly realised he was bloody good, and soon enough Seb became part of the family. We got a load of footage during his 6 month stay in London, and I was particularly hyped he joined us on the squad trip to Marseille in spring, solidifying his Serious Adult status. 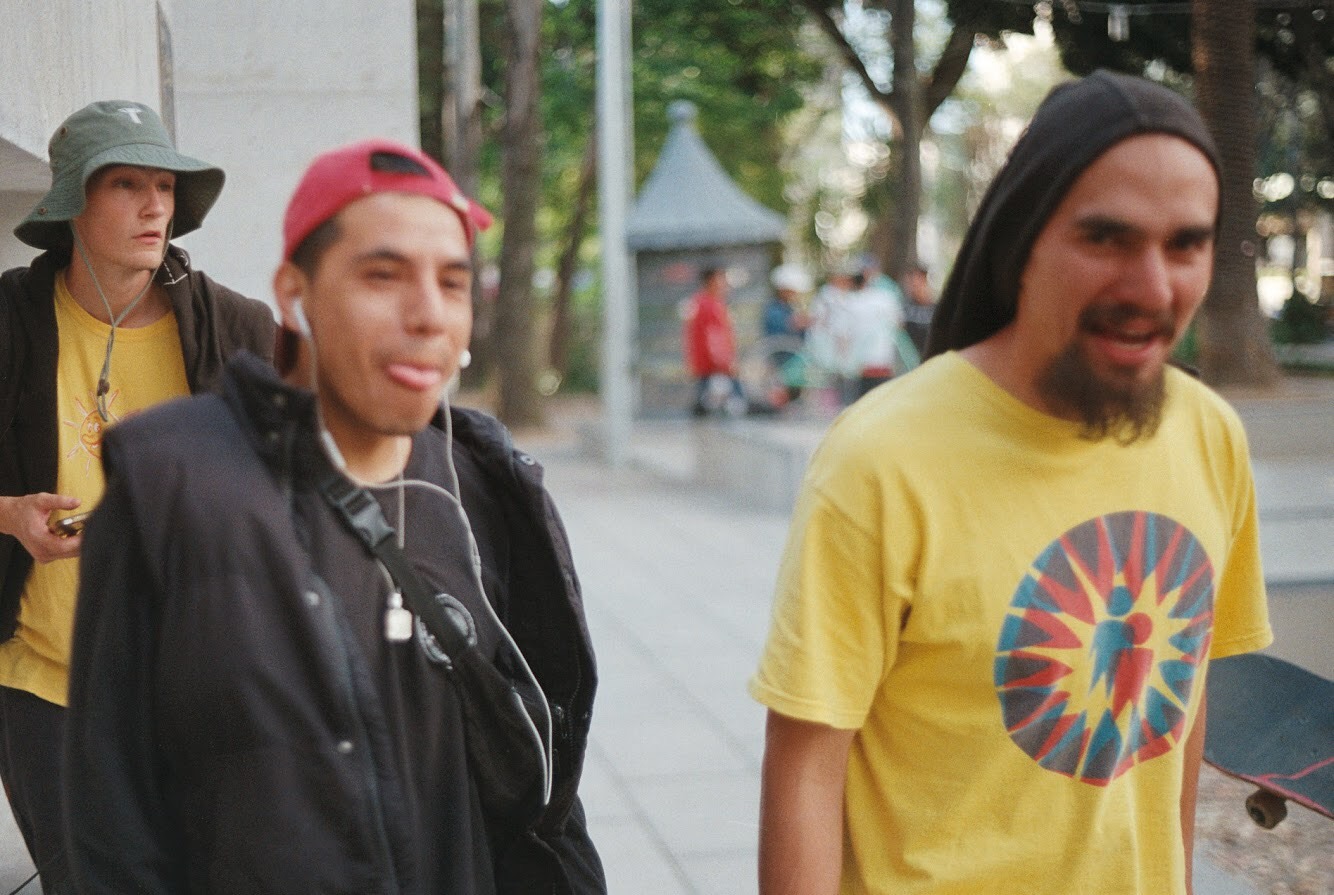 Me, Tony and Jimbo, Mexico City ~ Photo by: Miguel Cervantes

The result of all this was Seb bagging the closing section in ‘Teddie‘ – the SA video – which premiered at Vladimir Film Festival in September ’18.

Come November, I was keen to avoid the British winter for once, so hatched a plan to escape to Central America for a couple months to film a section with Seb in his natural habitat and work on my Spanish, after being kindly invited by him to come and stay with his fam in his hometown of Queretaro, a city of over half a million people in central Mexico.

I combined the trip with visiting my brother out in L.A. beforehand, then hitting up Costa Rica for a month post-Mexico. As soon as I got off the coach and was met by Seb and the boys, squished into his lil car, I was made to feel part of the gang – apple pipes and tacos dominated the first evening. 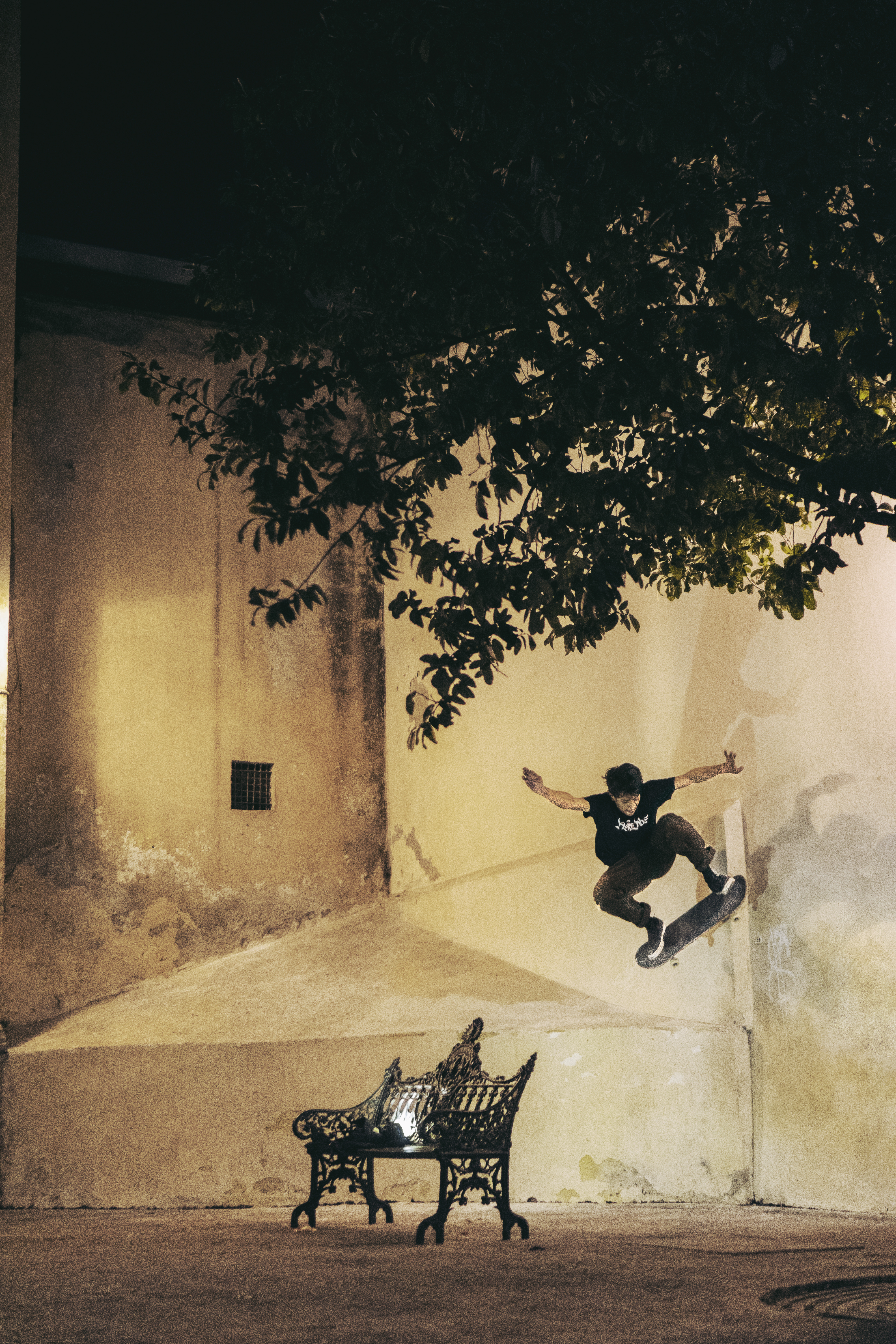 The guys were hyped on this one, telling me no one had skated this spot in such a way before.

Seb and I got to hitting the streets right away, linking up with his boys Topo, Joel, Diego, Dominic, Oscar, Miguel, Marino and Leo to name a few. Topo and Joel – the media men – helped put on a little premiere of ‘Teddie‘ in a local bar, and it was rad to see the reception to Seb’s part on his home turf. The next couple of weeks in Queretaro consisted mainly of driving around with Seb, listening to a lot of reggaeton on the radio, picking up homies along the way and trying to get some clips. Seb’s family looked after me so well, I really can’t thank them enough for their generosity, and all the amazing meals I was lucky enough to try at their house.

Tony’s a true G, and it was super fun filming a line with this backside flip to hill bomb with him in Candiles. Dices flacaaaaa!

They also took us on a mini trip to San Luis Potosi, another city a couple hours north of Queretaro, where we linked up with Richie Revuelta, an OG in the Mexican scene, Tosci, Guillermo and the rest of Versus shop crew, and spent a rad day exploring their city and seeing what it had to offer spot-wise. One day that particularly springs to mind from the Queretaro part of the trip was driving out to Grillo’s house 30 mins out of town, where he’s built this perfect plaza in his back garden, surely better than any of the skateparks in the city, overlooking miles of cacti. This day was made slightly more memorable by the food poisoning I got from some late night tacos de pastor back in Queretaro that evening, which left me slumped in Seb’s room for a couple days over the Christmas period – choose your food spots wisely! 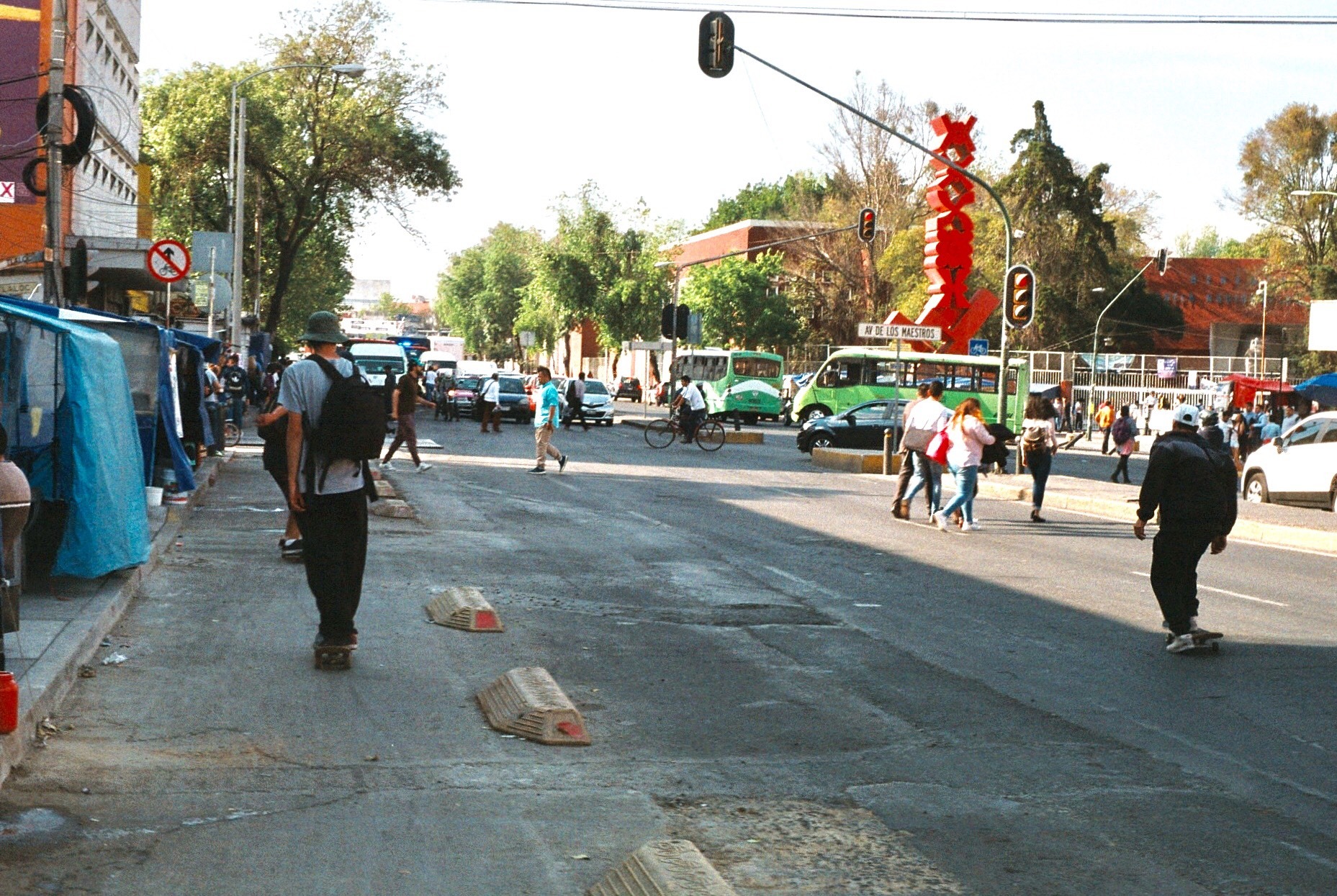 Tony and I cruising, Mexico City ~ Photo by: Miguel Cervantes

I knew I wanted to hit up Mexico City while I was in the country too, especially after watching Zach Chamberlain’s ‘Bright Moments‘ video, and got linked up with native VX enthusiast Jimbo (Adan Belio) via Zach before I left London. Jimbo and the crew came to Queretaro for a few days while I was staying with Seb, which is when the video began to really get going – several day-long missions went on over their time in the city, most notably a session in the hilly Candiles area on New Year’s Day, where Jimbo does the nollie flip off the stairs and bombs the hill in the video.

Jimbo nailed this nollie flip in Candiles without too much fuss, and got to bomb the massive hill as a reward after.

Seb and I were gassed to go to Mexico City to skate more with those guys, and so headed there a few days later. My time in the capital was half spent in an apartment with Seb and Leo, where the former made banging chilaquiles every morning, followed by a week staying with Jimbo and his family, round the corner from the infamous San Cosme skatepark. 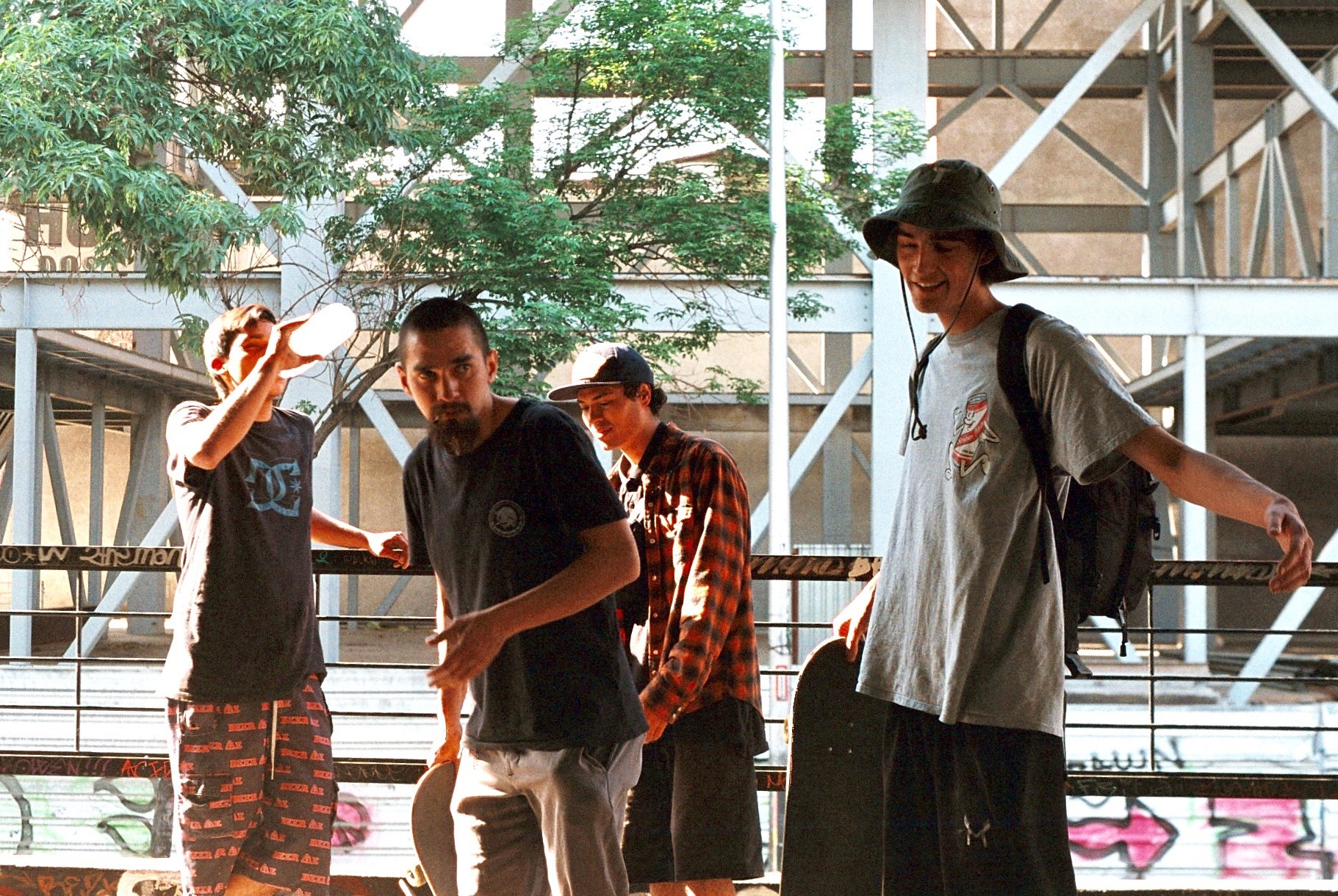 Angel, Jimbo, Seb and I at San Cosme skatepark, attempting the escape the grasp of ‘el vortex’.

Mexico City is an incredible place to film skateboarding due it’s size and chaotic nature. I had so much fun pushing around the city with Jimbo, Daniel, Tony, Angel and the gang, increasingly falling-apart VX in hand, hitting spot after spot, eating gordita after gordita, linking Yaje and the Aliens on a couple of occasions too. It was a blessing to have Jimbo as a host, I’m so grateful to him and his fam for giving me the real CDMX experience. 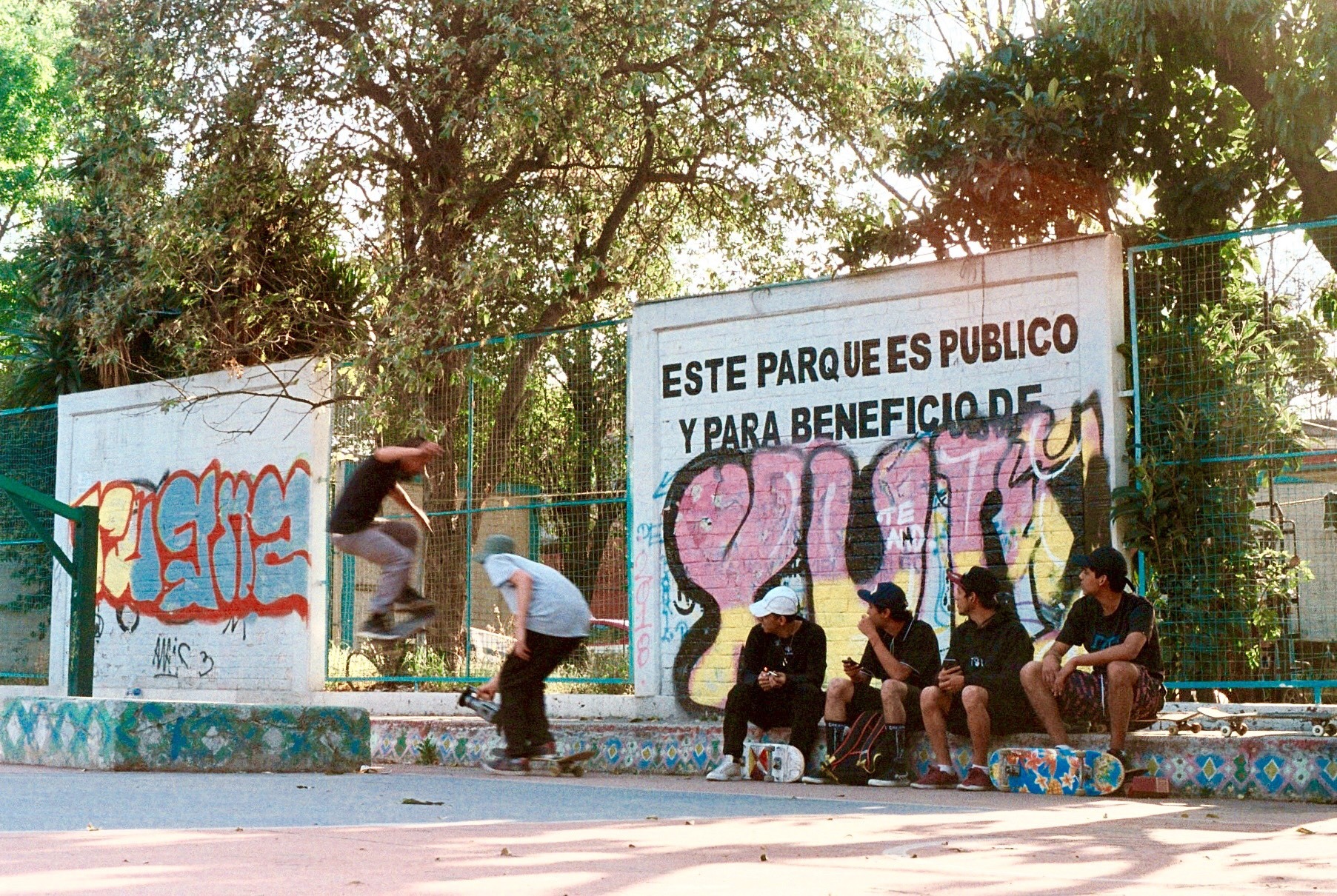 This was actually our 2nd visit to this spot, in an attempt to get a long line with Jimbo, starting with this quick footed double ollie.

We had a couple great excursions too – chilling with dogs at the top of the sun pyramid at Teotihuacan with him and Katy, and a rad day trip to Huixquilucan for Daniel’s birthday, where we were treated to fish tacos with endless bowls of guacamole by his family, after spending the day bombing hills in the Mexican countryside. The footage from that day I used in a little teaser clip as a precursor to the full video, though it’s got some of my favourite clips we filmed on the trip.

My last day in the city was shaping up nicely, Tony and I were trying to get one last line at this spot not too far from Jimbo’s place, a brightly coloured kinda bandstand at the back of this park. The sun was setting, squad was smiling, until out of nowhere 20 feds rolled up on motorbikes and nicked Tony, Jimbo, Seb and Angel for street beers. This resulted in Katy, Daniel and I having to go and bail out Jimbo at 1 in the morning with the equivalent of about £40. 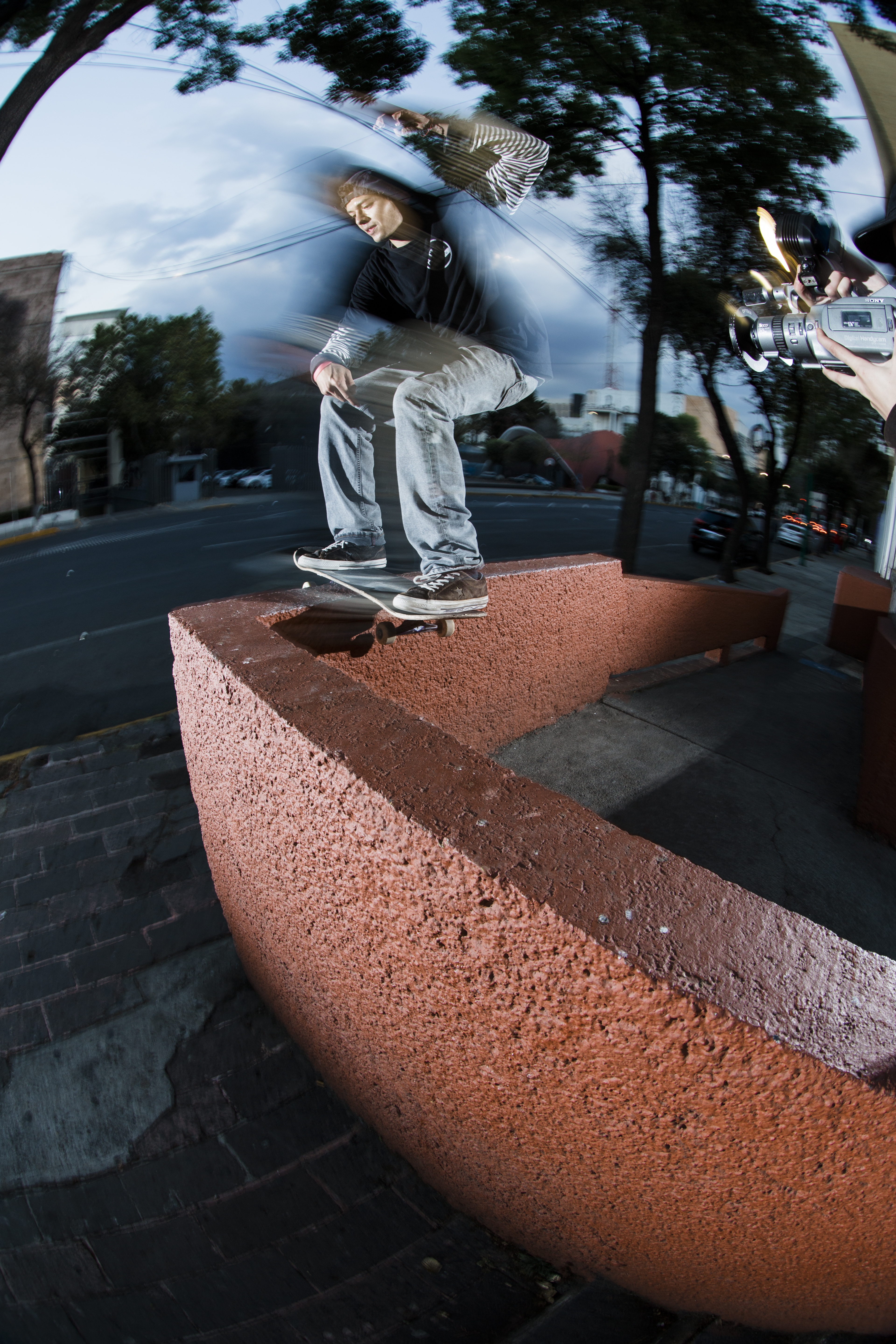 It took 2 visits for Seb to get this boardslide fakie, after water started gushing from the building adjacent, soaking the run up the first time we tried. Went back a few days later and he banged it out in 3 goes – niño de oro!

Whilst Daniel was inside dealing with the bureaucracy, Katy and I were waiting outside the station with several Mexican mums, queueing to bail out their kid for some stupid offence. The rest of the boys were still in a cell by the time I got to the Costa Rica the next day; feds really got their hustle on out there haha. 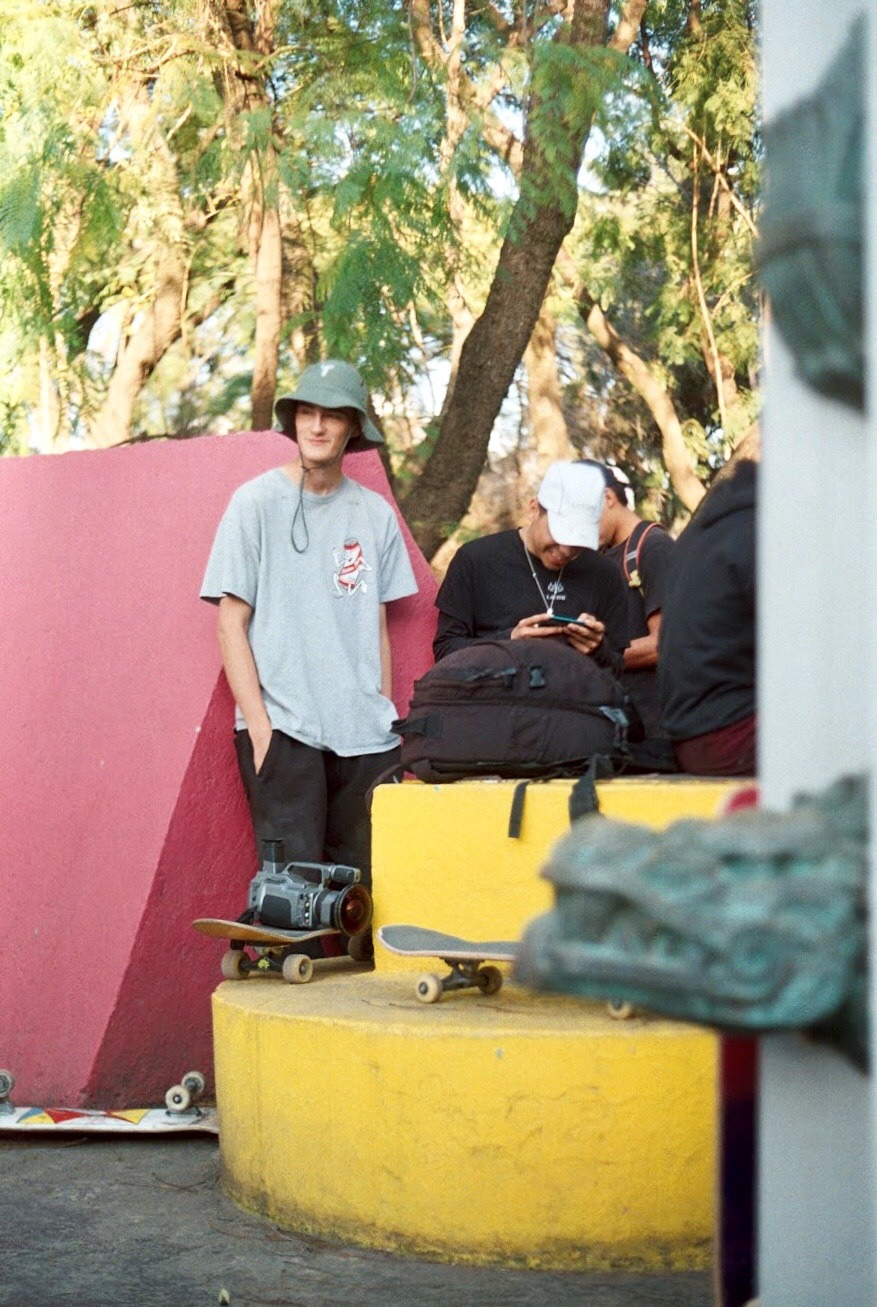 Tony and I, Mexico City ~ Photo by: Miguel Cervantes

Moments before Mexican police rolled up and deaded the good vibes instantly.

I actually ended up returning to Mexico City for a bonus week after Costa Rica, staying with Jimbo again, meaning more visits to the avocado man and the chance to get a few last minute clips, before heading back to London early March. 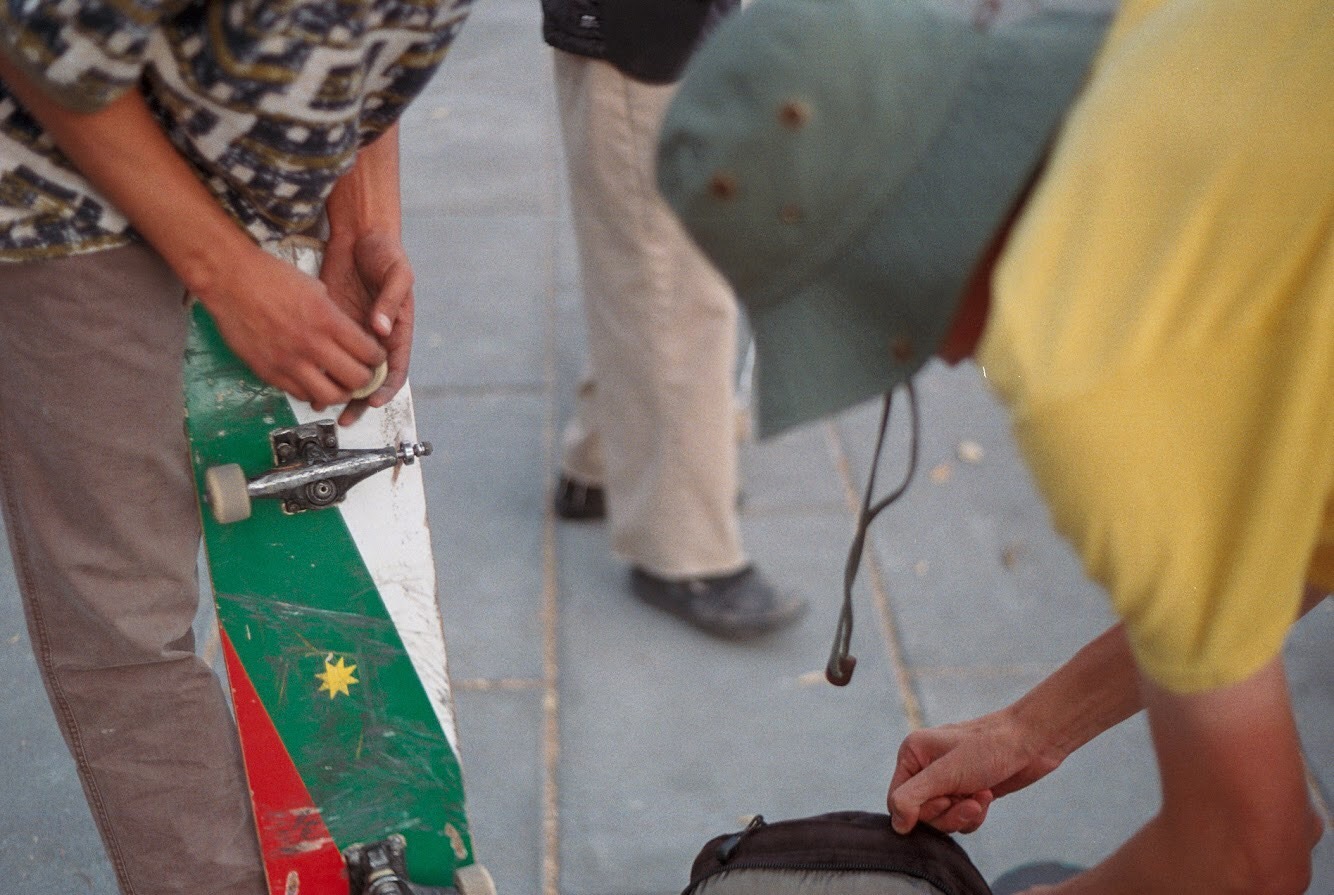 Angel and I, Mexico City ~ Photo by: Miguel Cervantes

I had an incredible time in Mexico, and would highly recommend a trip there, skating or otherwise; it’s got endless spots to offer and cheap, amazing food everywhere. I can’t wait to back, explore other places and film more stuff with the gang! I’d also highly recommend checking out the work of Jimbo and Daniel at 1521 here, as well as Joel’s documenation of the Queretaro scene here. 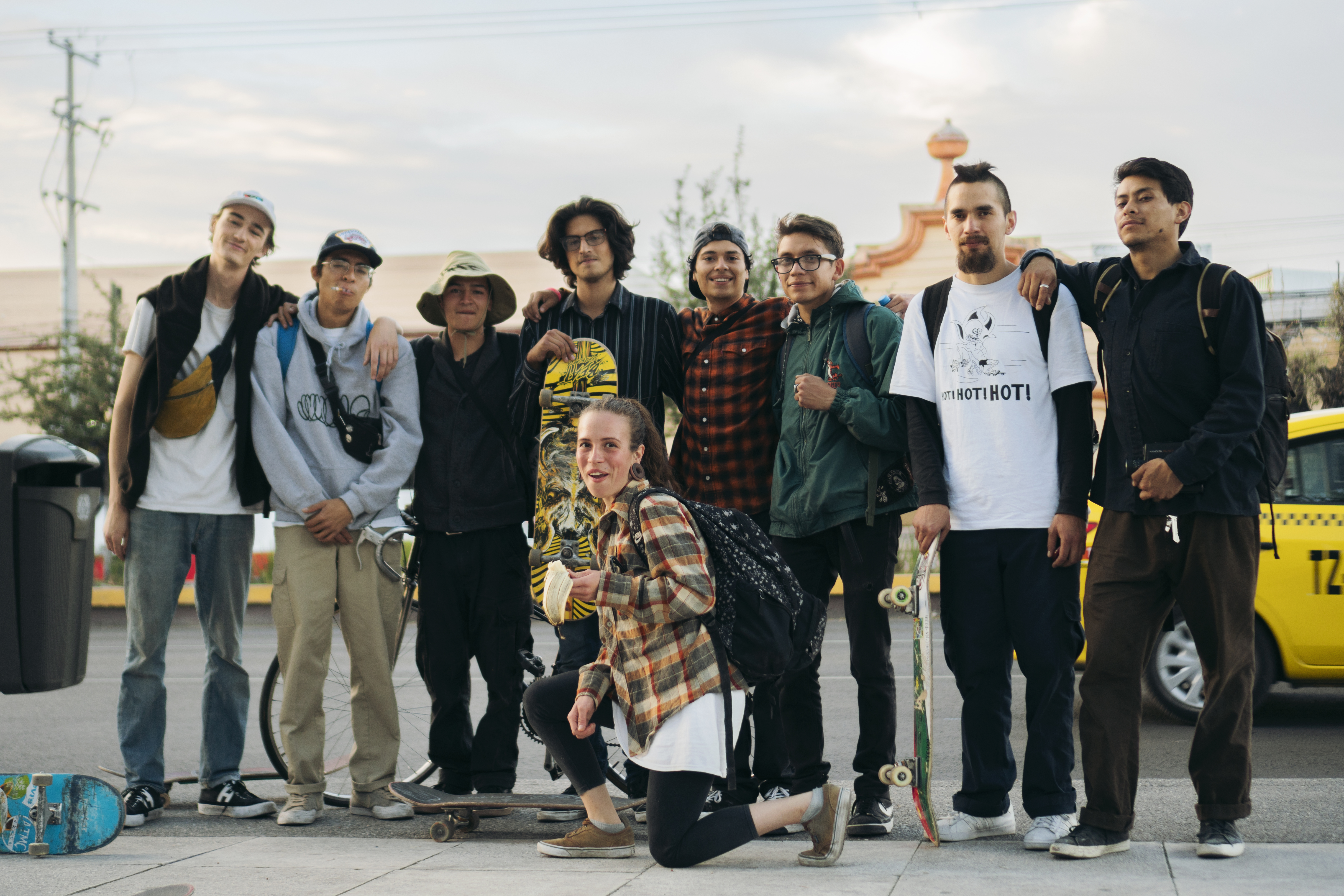 Family portrait by the Alameda Hidalgo park in QRO, after narrowly evading a ride in the back of a fed van.

I was lucky to meet so many amazing people whilst out there – big big thanks to Seb and his family, Jimbo, Katy and the family, Daniel and his fam, Joel, Topo, Migue, Daniel, Marino, Gabriel, Ivan and the boys in Queretaro, Viernes, Tony, Mundo, Pato, Angel, Mikey, Chapu, Micedele and all my friends in Mexico City, tlacoyos azules, manzanas and skateboarding. Yeaaaaa mandrake! George.

I think this was the penultimate session before I headed back to London. We pushed for hours and hours across the city, coming across this bump to bar towards the end of the day, where Mexa and Seb both got a clip.

The Serious Adult crew hit up Rotterdam for 4 days.