In time with this boozy bank holiday we thought it would be suiting to upload Danny Tapper’s Beak Brewery interview from our first in print issue. Read below!

What sparked your interest in beer?

I’ve been interested in beer for as long as I can remember. One of my earliest memories is of my grandad drinking a pint of best bitter shandy in the sun. I was only a toddler but I already loved everything about it: the smell, the colour, the sight. As a teen, I got really into local real ales. I read the local CAMRA magazine, The Tyke Taverner, and would rate different beers out of ten with my friend Jo. If that wasn’t nerdy enough, ten years ago I took my now wife on our first date to the Theakstones Brewery in Masham – we were driven there by my grandad. 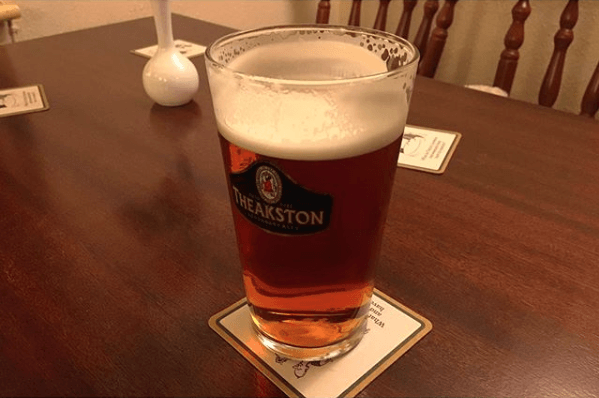 When and how did you get into brewing?

I started home brewing about six years ago, whilst working as a full-time food and drink writer, which is something I still do. I was doing a lot of travelling at the time, interviewing artisan producers around the UK, Europe and US. One day I distinctly remember thinking to myself: ‘I’d much rather be making food than writing about it.’ And there and then I decided to buy a home brew kit. I had no idea what I was doing. I just taught myself by reading online forums. I was amazed when my first brew – a single hopped Cascade pale ale – actually turned out okay. I’ve been obsessed with it ever since. 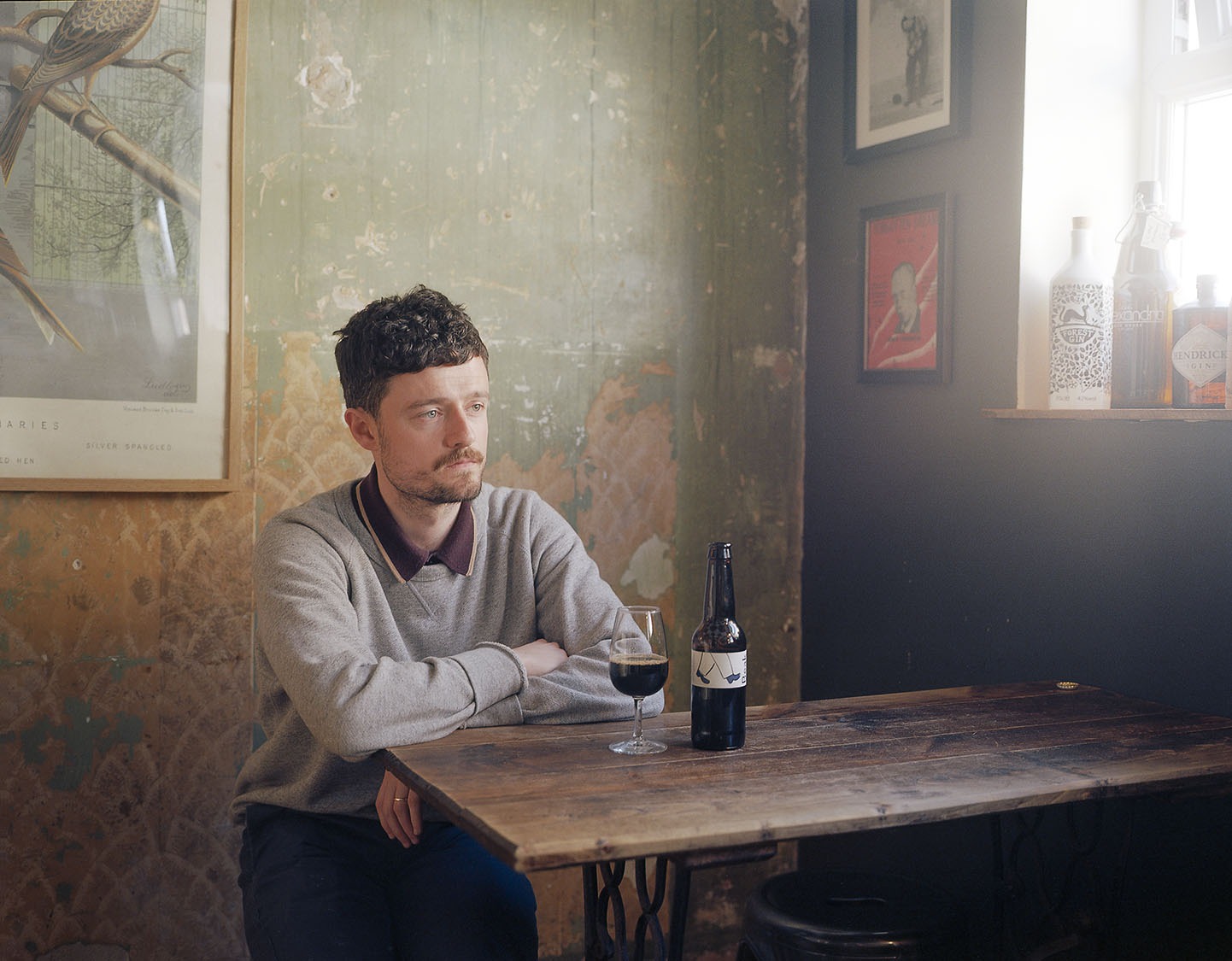 What is it about home brewing that appealed to you?

I love the smell, the alchemy, the waiting, the satisfaction of putting something homemade on the table and the pleasure of knowing I’m participating in one of the oldest activities known to man. There was a time when almost every household in Britain made its own ale. The woman of the house – the Brewster – would do the brewing and the man would do the serving. Those households that were particularly good at it opened up as Public Houses, or ‘pubs’. I believe that if interest in home brewing ever diminishes then we risk losing an important part of our culinary heritage. Sounds a bit over the top doesn’t it? But look what happened in America. Home brewing in The States was banned until 1978. As a result, the beer industry was starved of talent, innovation and creativity, spawning an industry dominated by four multinational brewers specialising in beer that placed profit over flavour. In effect, American forgot what good beer tasted like. And this could easily have happened here – in fact it sort of did for a while.

How did you transform your hobby into The Beak?

I started by selling my homebrew to friends and family. I would brake even and use the money to buy more ingredients. Then a few years ago I bought a tiny 100-litre pilot system and began making a few hundred bottles at a time. The first place to take a chance with my beer was The Reliance in Leeds – one of my favourite restaurants in the world. I had a little tasting session with Steve and he agreed to stock my Rye IPA. I couldn’t believe my luck. Word spread and I spent the next couple of years ferrying beer around Leeds using a combination of stolen supermarket trolleys and a VW Polo. A part of me is really proud that I pretty much lost money on every beer I sold for a long time. 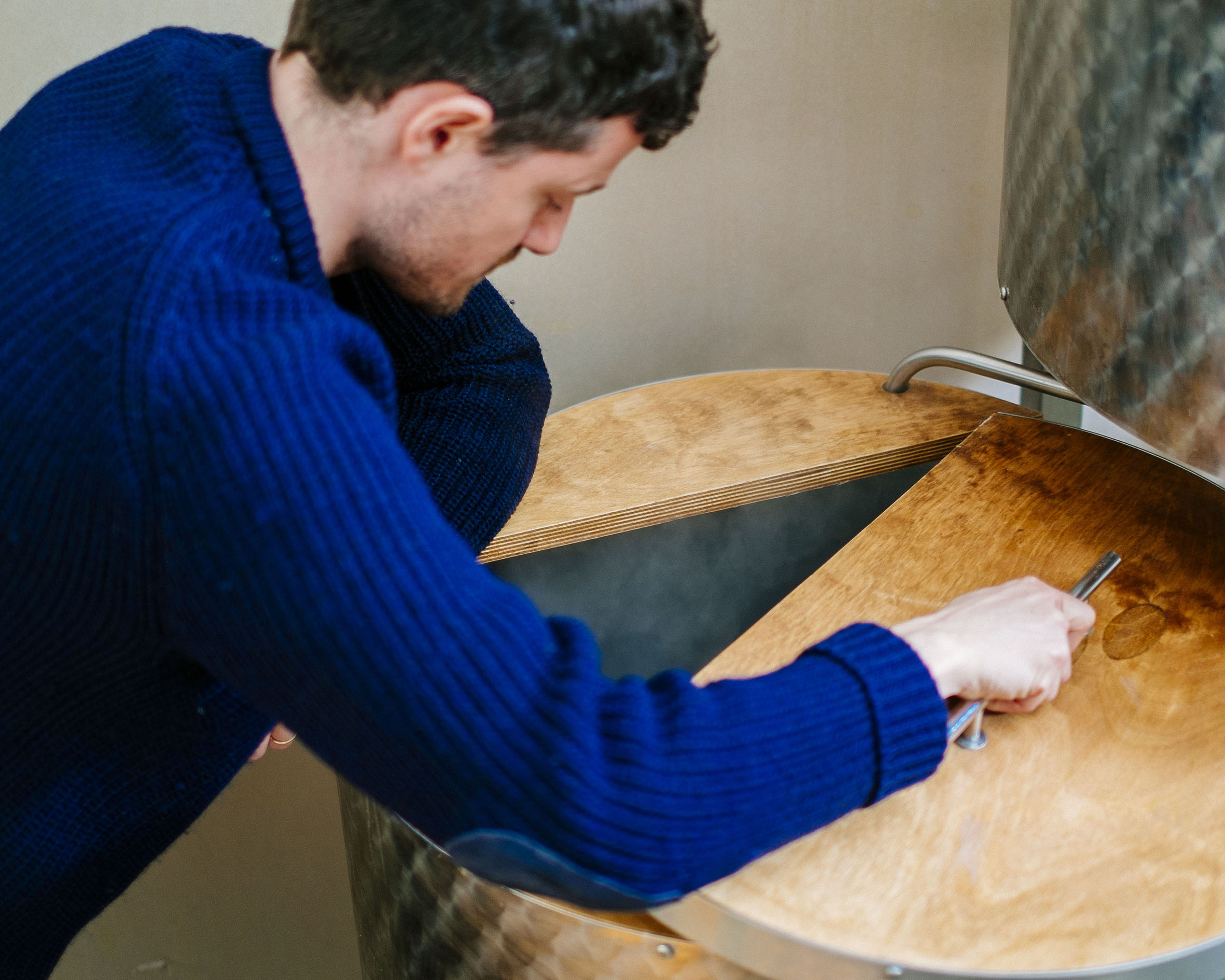 What is the brewery’s concept?

The Beak specialises in unfiltered, unpasteurised beers that pair well with food. It’s nomadic, too. So instead of making my beer in one place I travel around the country creating one-off beers in collaboration with interesting people and organisations, ranging from microbreweries and farmers markets to restaurants and English vineyards. Pretty much all my beers start the same way: with me sitting at my desk researching and thinking about different ingredients. I think I’ve read The Oxford Companion to Beer by Garrett Oliver and The Flavour Thesaurus by Niki Segnit about 16 times each. When I’m done reading and researching I design each recipe on my laptop using brewing software and then test it a few times on a pilot-system scale. I’m still self-distributing so I spend a lot of time on the road between Leeds, London and Manchester listening to The Magnolia Electric Co and Adam Buxton podcasts.

Have you brewed anything else aside from beer?

I once made a batch of Indian tonic water with some friends as a little experiment. We bought cinchona bark from Peru and then brewed with lemon, orange and honey. It turned out way too bitter so I decided to stick to what I do best. 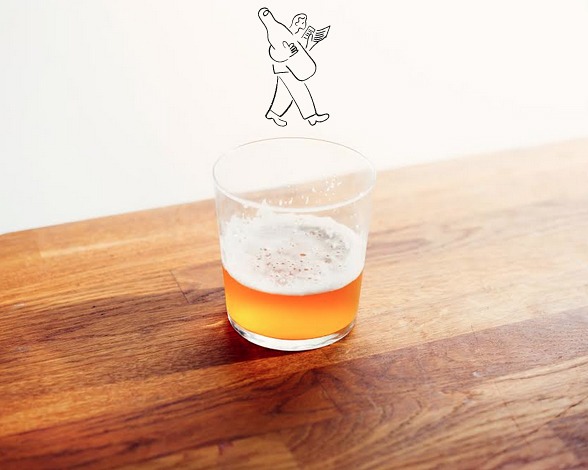 How similar do you feel the skateboarding and brewing communities are?

At one time these two communities kept themselves to themselves. You’d rarely meet a skateboarder that was obsessed with good beer and you certainly wouldn’t meet many CAMRA enthusiasts that knew who Mike York was. But the beer scene these days is younger, more inclusive and creative than it once was, which I think appeals to skateboarders. There’s also a strong DIY aesthetic to craft brewing that appeals. In terms of what sets the two scenes apart; the beer world tends to be a little nerdier and more macho – two things I cannot really relate to.

Jay Cover designed The Beak’s logo; has he always held the reigns for this side of things or do you collaborate with other artists as well?

I was introduced to Jay by my friend Ollie Shaw from Catalogue, who designed my website and label. We gave him a super loose remit: to create a logo that embodied The Beak ethos and that didn’t take its inspiration from the beer world or other beer labels. I was blown away by what he produced and fell in love with the logo instantly. It was playful, unique and timeless. And it kind of reminded me of the sort of thing you’d see on a French wine label from the 1980s – which was just what I wanted. Jay is one of my favourite artists so I hope we’ll be working together for a long time. 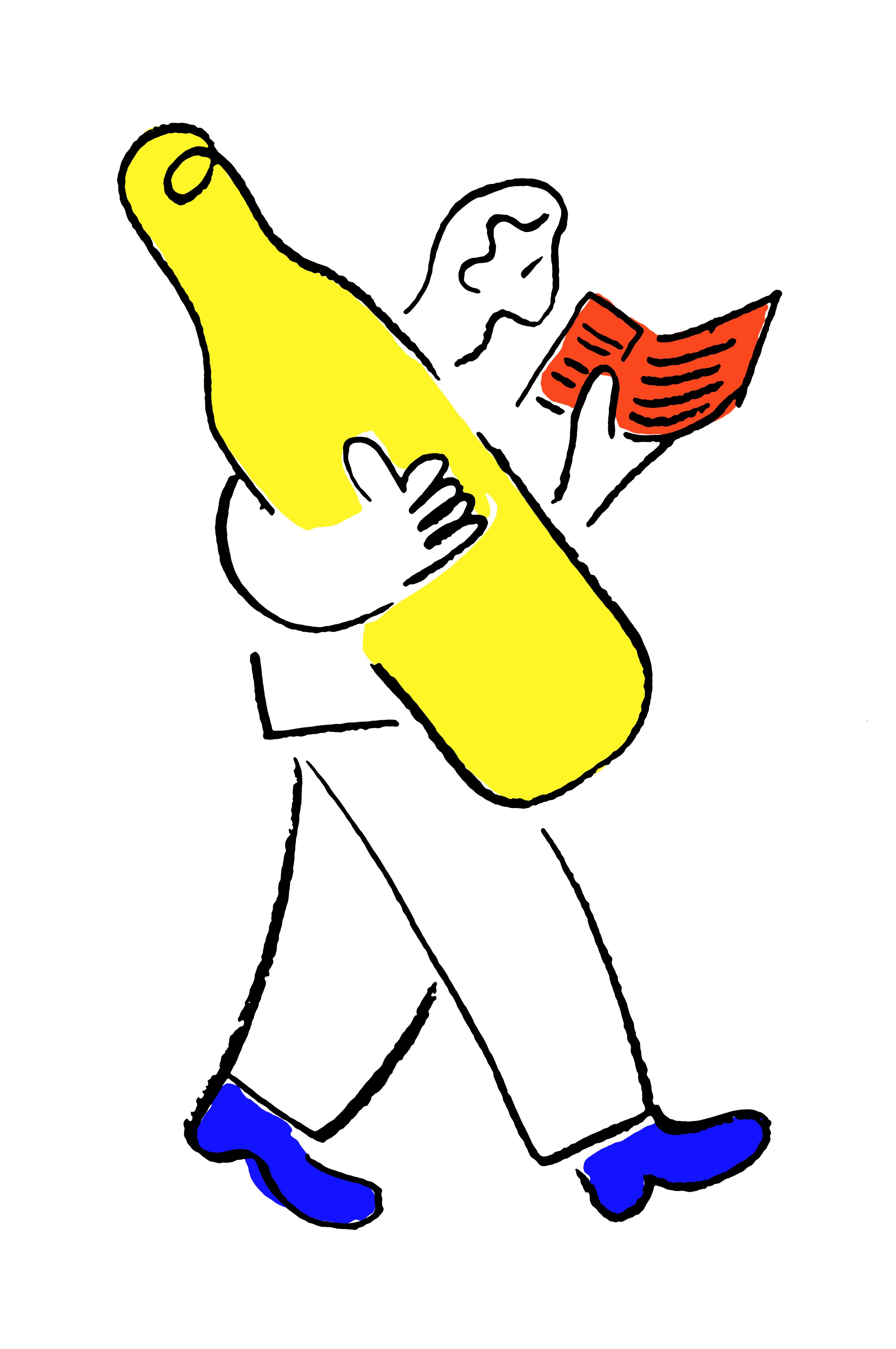 What have been some of the hardest things to brew and what are some of the liquids you’re most proud of?

The hardest part of running a brewery isn’t the actual brewing; it’s everything else that comes with the territory, including branding, costing, logistics, selling, cash flow and bureaucracy. But if I had to pick my hardest brew to date then I’d probably say my Bolney Estate Porter. I decided to age this batch in a red wine barrel sourced from the Bolney Estate vineyard in Sussex. During the trip back up to Leeds the barrel broke free of its rope and almost escaped through the back door of the van on the motorway. After that, I almost broke my wrist whilst transferring the porter from cask to barrel. Ten months later I hand bottled and labelled the entire batch. It took me two full days to do 700 bottles during which time I accidently drank some peracetic acid. I’m still stoked I did the beer though. 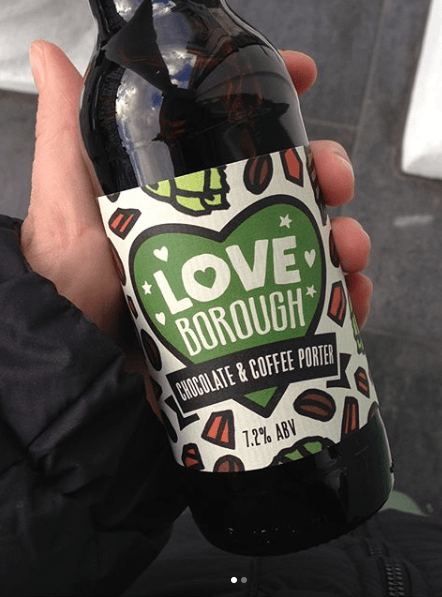 What ales are you working on right now?

The beer style causing the most excitement at the moment is undoubtedly the Vermont Pale Ale. For the non-beer nerds amongst us, this is a beer characterised by low bitterness, massive fruit-salad-like aromas, murky appearance, silky smooth mouth feel and relatively low alcohol content. Make no mistake about it: this beer can be awful. But done right it can be an amazing expression of new world hops. I’ve been working on my own interpretation of this style for a while, tinkering around with water chemistry, different flaked malts and dry hopping schedules, and I’ve finally created a recipe I’m really pleased with. I’ll be brewing this from June onwards. 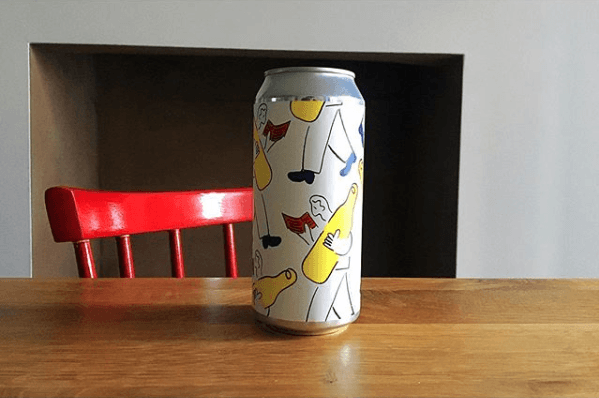 Liisa Chisholm's Interview from Issue 1 of our in print magazine.