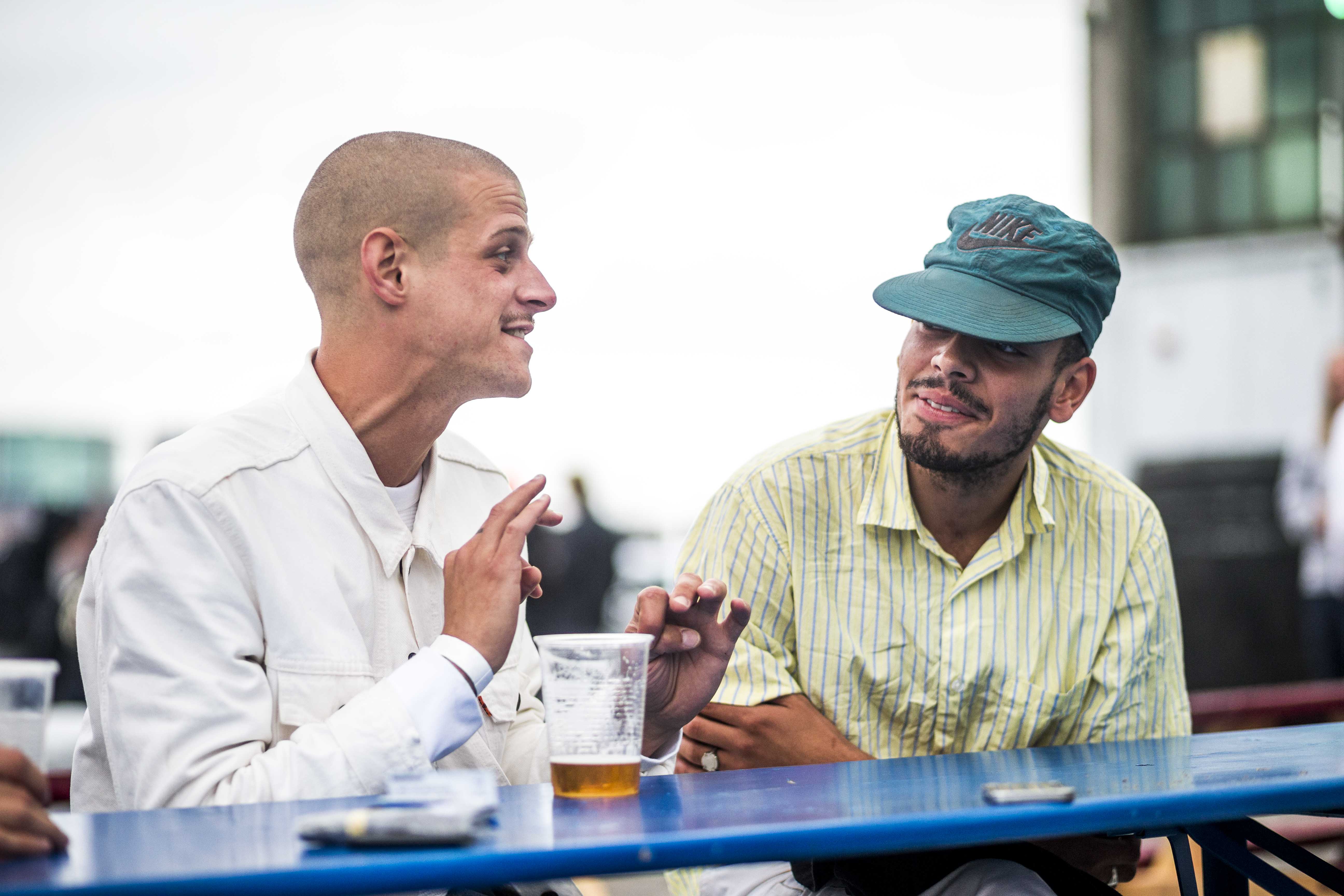 While out in CPH Lille legend Valentin Bauer’s fate led him to meet West Londoner Kyron Davis for the first time, it was like love at first sight. See below for a double interview of this hilarious duo.

Kyron: Hell yeah get the doubles in.

Val: And I’m gonna try not to fan out too much.

Heywood: When you’re in Copenhagen what do you guys like to drink?

Kyron: In Copenhagen my favourite drink is water first of all.

Val: Yeah me too.

Kyron: My favourite drink is water because out here people drink too many beers and they just need to chill, and also you need to know when it’s okay to drink water. And my second favourite beer, is probably not a beer, it would probably be a cocktail like dark and stormy. If anyone’s got me for a dark and stormy! (An alternative to dark + stormy was bought for Ky later that night.)

Val: First I’m just drinking beers because I’m kinda afraid to be too hungover the day after. But when I’m fucking drunk off beers I’ll just drink everyone’s cocktails.

Val: Because the spiking thing is kinda over now, so you can just drink everyone’s cocktail and it’s fucking safe.

Val: And you’re not gonna get drugged out.

Heywood: So no ones going to try and roofie you?

Heywood: What about your best experiences out here in Copenhagen?

Kyron: My best experience for sure is just meeting this geezer right here (Val) and also just meeting people in general. It’s like a safari, it’s literally a safari. Imagine you’re travelling like a zoo safari and it’s just like, oh shit there Grant Taylor over there, there’s Marius Syvanen etc etc. By the way that guy Marius, the Habitat dude, from since I can remember is actually one of my favourites.

Val: He’s one of the best by far, really.

Kyron: But just like everything from a kid, I’ve just loved him and it’s so cool, like he come up to me when we were getting a cocktail and we just got chatting you know?

Kyron: Don’t fan out, I’m about to cry! (Chuckles)

Val: Yeah I am doing it! And also like maybe an hour ago we went to the sauna in a truck, like 4 or 5 times in a row and then going in the fucking cold water and that was one of the best experiences. I remember talking to Remy Taveira and Edouard Depaz like, “Oh fuck, it’s already the final chapter of Copenhagen, it’s such a shame.” even when I landed I was thinking it’s the last 5 days you know. It’s too short. It’s fucking too short.

Heywood: Everyone just wants the good times to continue out here.

Kyron: It’s too short but at the same time I’m like…

Heywood: It may end up accidentally killing off a lot of skateboarders.

Kyron: At the same time there are so many skateboarders here but at the same time like, some skateboarders are just knob heads. Like in general because even with the riot police and the police in Copenhagen like everyone is trying to start loads of shit with the police and it’s just like the police ain’t here to fuck you up…they’re trying to help you out so don’t try and fight them. There’re so many dickhead skaters around just causing loads of trouble.

Val: Yeah yeah! I heard a story like the police didn’t come here to CPH even for 10 years until yesterday a fucking dumbass dude just threw rocks at a police car, but in 10 years like this hasn’t happened at all.

Val: And the whole vibe is everybody is welcoming and cherishing the moment.

Kyron: I’ve never been to Copenhagen before and this is the first year. There’s so many skaters and stuff but also so many people just being dickheads, like you need to chill out.

Heywood: Worst experiences out here, if there have ever been any?

Val: My first year in Copenhagen was last year, I have only been 2 years in a row but I have no worst experience of Copenhagen.

Kyron: My worst experience for sure was last night, just some guy that I’ve looked up to in skating or whatever was just trying to act like a fool, like talk some shit, he got super drunk or whatever and we ended up exchanging words.

Val: But that’s the worst thing?

Kyron: He was helping me out but like cos you get drunk and turn from one thing to the other, he was being a dickhead and I had to tell him like “Yo I like you, but at the same time don’t take the piss”. 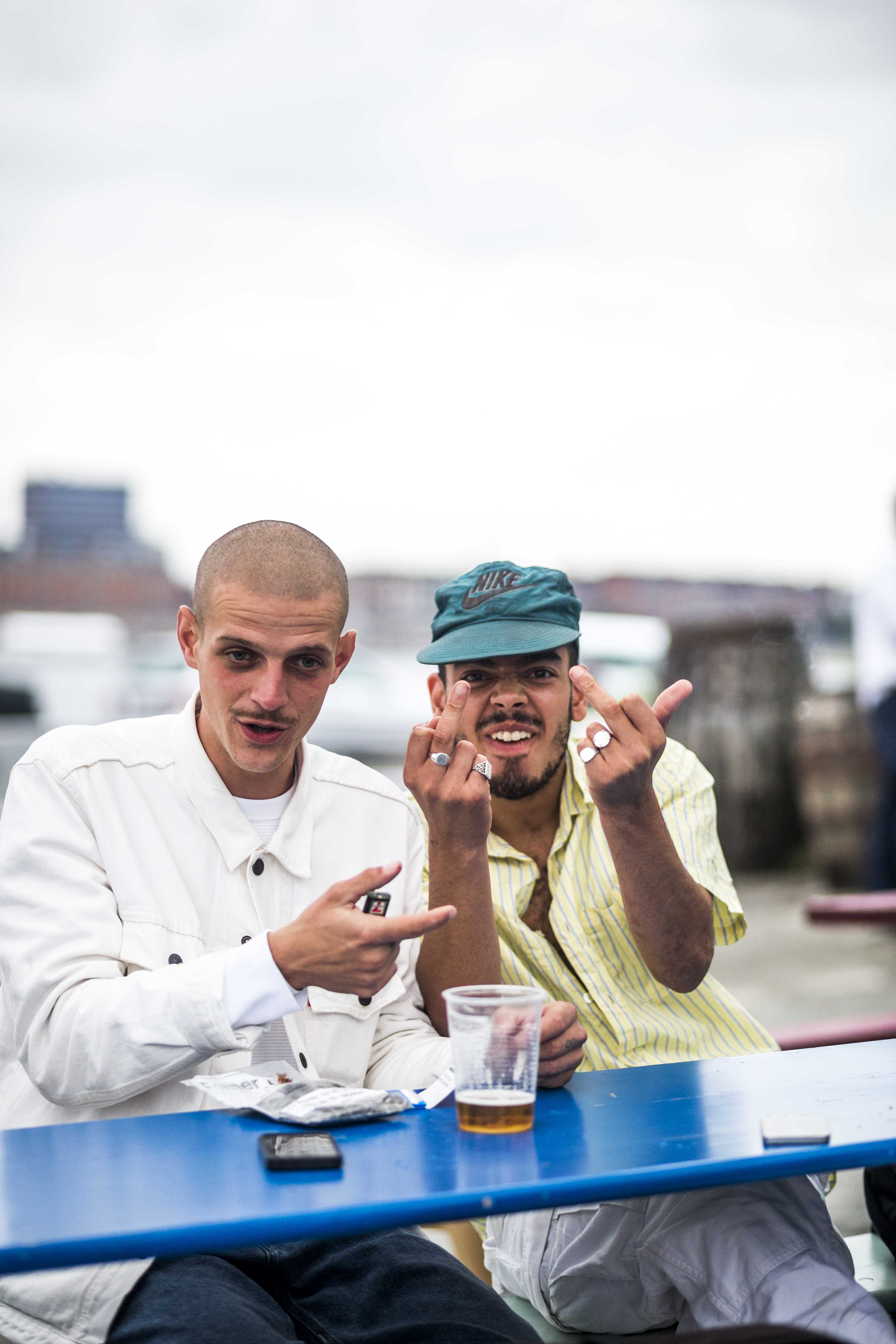 Kyron: Ah I’ll tell you the funniest thing I’ve seen, some guy got on one of those containers and got everyone all hyped up and then just started trying to tail drop off the thing. I remember looking at that and thinking what you’re gonna land straight into piss, like it’s legit but it’s straight into a pile of piss! Also you got no transition its like 12ft up to flat! Biggest mosher drop!

Val: The craziest thing I saw in Copenhagen was last year I think like, I don’t skate tranny at all and I only really like watching tranny when it’s really gifted dudes, it gets me fucking psyched.

Kyron: Like fucking Grant Taylor flying through the air!

Van: Daan Van Der Linden too, when I see him! Last year there was this jam, the ‘Dressen Salad Bowl Jam’ or something like this, it was this ginger dude from Copenhagen skating the bowl and it was one of the fucking craziest things I’ve ever witnessed. He was so white, he was like anaemic, I saw him skating the bowl and he was like full on shaking, he didn’t like the people watching. You could notice he was feeling weird about everybody watching him shredding the bowl, he was fucking shaky you know and taking some bong hits on a watermelon. That was one of the sickest things I’ve ever witnessed in Copenhagen. This dude, I don’t know his name but he deserves a fucking shout out!

Heywood: I don’t remember him but I’m really keen to track this guy down now! Besides the unknown ginger dude, who else are guys hyped to watch skate out here?

Kyron: Fuck, apart from myself?

Kyron: Nah I’m playing, I’m playing. Erm I think for sure Nando, Darkness, seeing him (Fernando Bramsmark) and also the bowl skateboarding I’ve really seen. Obviously like Grant Taylor and Raven Tershy! But like I guess everyone, anybody that skates who I’ve not seen before!

Val: If you’re talking about the whole CPH thing it’s Bradley, fucking Kevin Bradley for sure. Like the fucking sunglasses are made for his head! You know like it should’ve been on the flyer, that should’ve been his head on the fucking flyer! Hmm this is quite a hard question, I’m talking quite off, like I fucking love what Kyron does but the person I’m most hyped to see skating Copenhagen is Ishod Wair and that’s a no brainer. That’s a fucking no brainer. Just to see him giving like 2 lazy pushes like he’s just going to buy some bread at the bakery and finally he’s doing no comply blunt fakie out of some transition and it’s like the most perfect move you’ve ever seen somebody do in skateboarding. You have to agree about this like he’s the most perfect person you see alive, you know like, there’s nobody over it. We were talking about this previously, how can this dude not be hurt all the time because you see footage from him every day on Instagram, everyday he’s ripping. The most street footage from Real Skateboards, Nike SB and Spitfire, he’s got footage everywhere. How could this dude not be hurt like, it seems like he’s getting the perfect footage everyday – what’s the formula?

Kyron: Oh damn! You guys talking about that kind of stuff!

Kyron: There is no formula for sure! I see him do a kickflip fakie on the tranny yesterday and I was like, “Oooooh that’s nice!”.

Kyron: Like when did you start skating bowl Ishod, like I’ve looked up to you as a kid and all of a sudden you decide you want to skate bowl and you’re just doing it like nobodies business!

Val: Overall he’s the best person to see skating in Copenhagen, over Raven and GT to me.

Kyron: And I’ve met him a few times before and he’s actually just the chilliest dude – it’s nice.

Kyron: He’s gifted for sure and he doesn’t have to try hard but he still tries hard.

Val: He tries hard but he’s like fucking John Lennon or Bob Marley of skating!

Kyron: He’s so good at what he does and I’m like what the fuck, you’re so legit at the same time.

Val: He looks like he doesn’t care, he’s just doing it. He’s the perfect mix of John Lennon and Bob Marley in skateboarding. Plus Usain Bolt!

Heywood: Okay guys, last question, anything you would recommend to do in Copenhagen?

Kyron: You need a bike!

Val: it’s a little bit late to ask this question because from what I heard it’s the final chapter, I recommend that you could’ve made it here now!

Val: You’re missing out, you’re fucking missing out! The whole city has got a crazy vibe.

Kyron: Don’t be shy to appreciate the people you look up to because you see so many…everybody from everywhere, like if you see someone you like, fuck, just say hello that’s it! There’re so many hellos that have been said but it’s so nice just to see my favourite skaters. There’s a lot of appreciation which is legit!