After seeing Marca Barbier’s incredible ‘15 Times‘ part we’ve uploaded his Vague, Issue 21 interview by Val Bauer to the web, with excellent photography by Maxime Verret and Alex Pires. Learn more about Marca below! 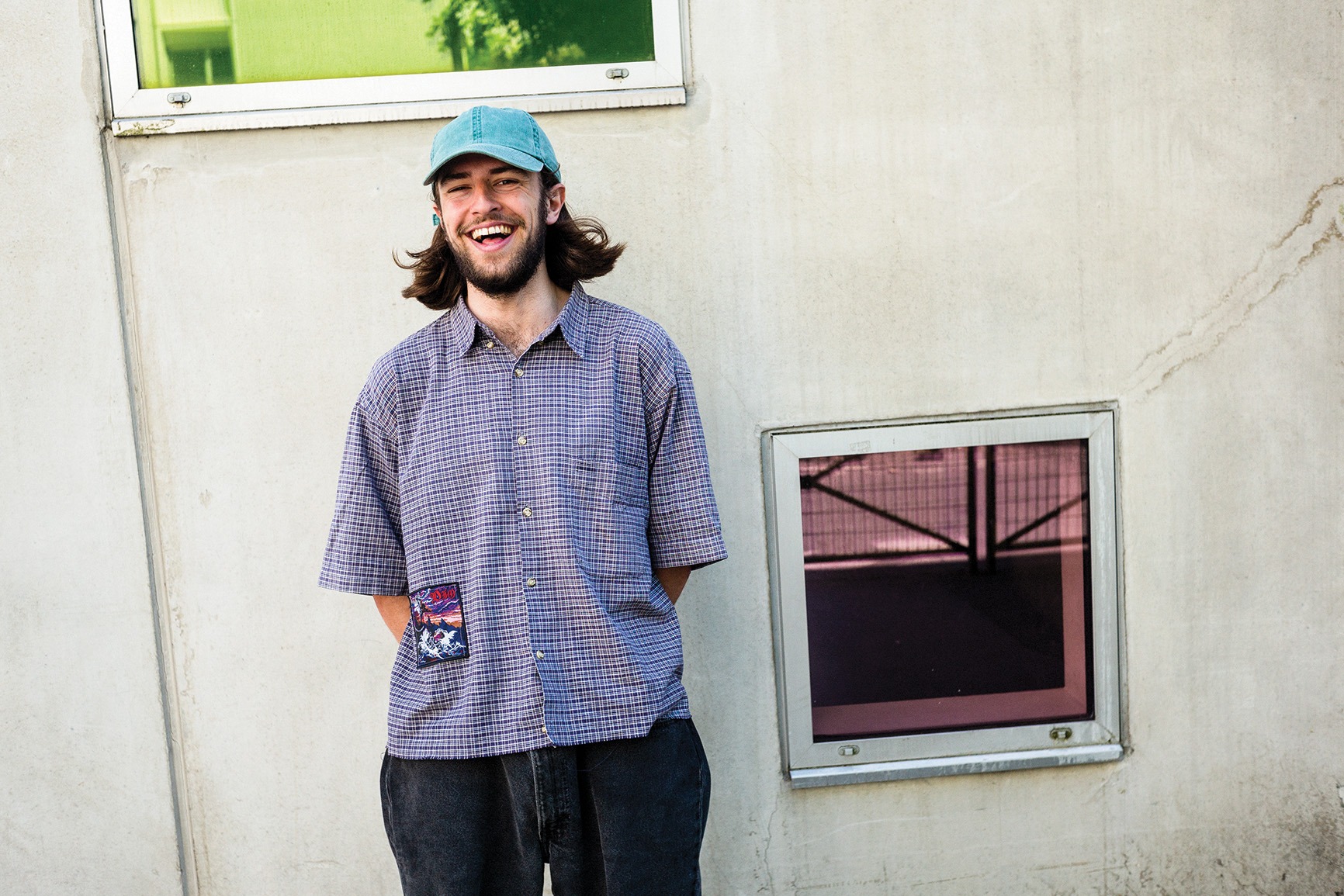 I’ve known Marca and have called him a friend for a few solid years now. He’s a really easy going, hilarious and generous kind of guy, which makes him a lovely person and one of my closest friends. Even if they are both really different on many levels, I see both him and Edouard Depaz as younger brothers; I’ve seen them slowly growing into proper adults, doing great things on their board and even sometimes making some of the same mistakes I’ve made myself earlier. Marca is six years younger than me and it’s sometimes funny to witness how naïve he still sounds. All he has pretty much ever known, besides studying Applied Arts for a year, is skating. Everybody’s gotta learn. It’s been amazing to get the chance to spend as much time as I spent with him, and I’m sure he will mature even more as he goes through what he is going through right now. I wish you the best and love you Marca.

How are you today? Where you at?

I’m doing very well, I’m in Normandie at my mom’s. I needed a breath of fresh air.

There is a lot going on in my mind right now and the weather in Paris sucks a bit so I felt like going to the countryside instead of being stuck in my flat in Paris.

Who do you skate for?

What happened with Nike?

Colin Kennedy called me on the 3rd of May and told me that my contract wouldn’t be renewed, meaning May was my last check. I heard multiple times that Nike is actually not renewing a lot of people’s contracts.

How do you feel about it?

I feel like it’s the beginning of a new chapter in my life. 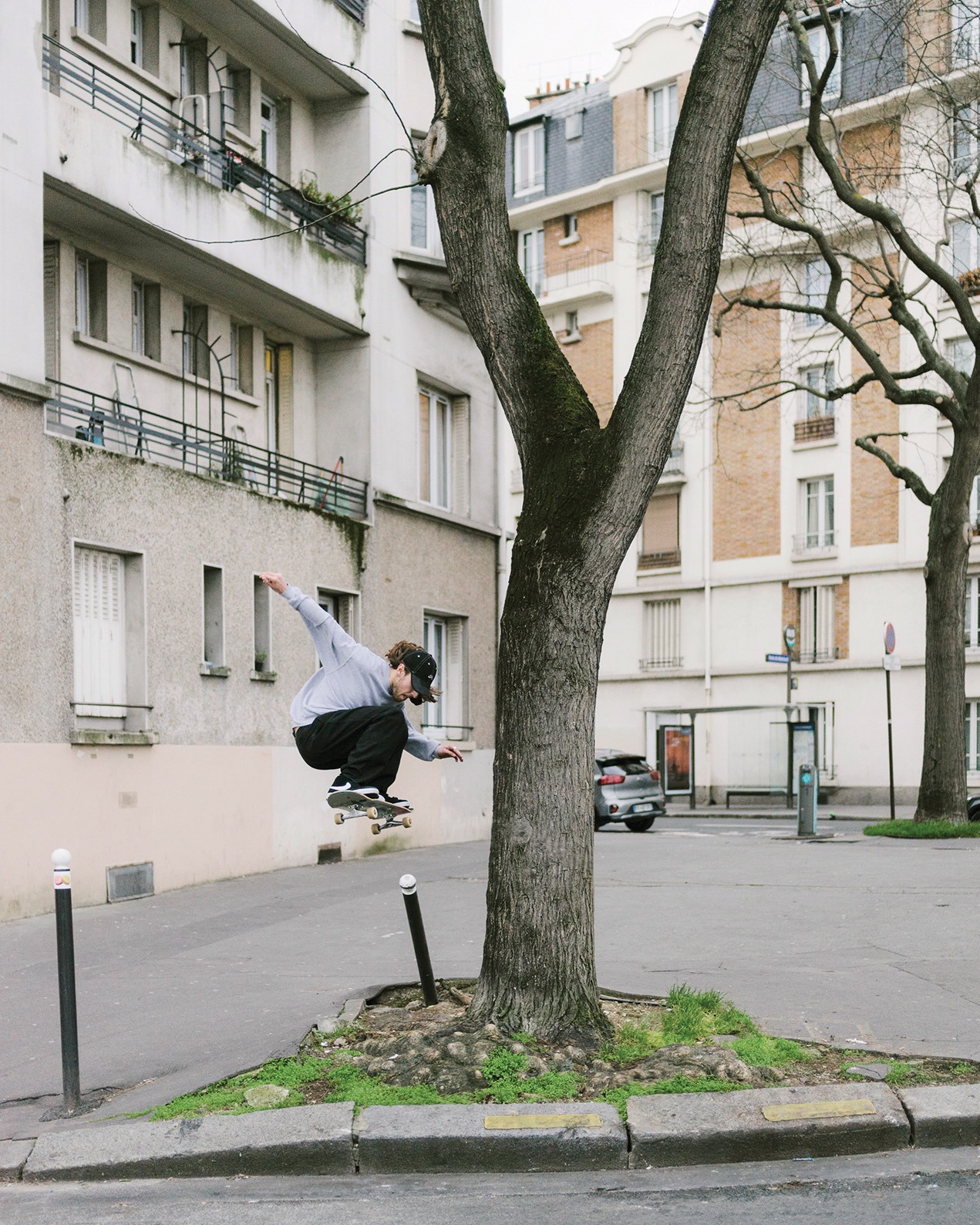 Did you see that coming?

Definitely, and I was mentally prepared in my mind because my contract ended at the end of May 2021. So I thought about it. I was like, “What if Nike doesn’t renew my contract?”, asking myself how I would pay rent and stuff. I’ve been paid for three years with Nike and it gave me the opportunity to live my life 100% as I wanted to do it. It was awesome but I guess now life is telling me that I have to discover something else too.

What do you mean?

When I started to get paid with Nike I was thinking that I was living the dream, first big trip in South Africa with the Nike English crew and Michi as a TM, in my mind it was just getting started. Then I dropped my studies and focused 100% on skateboarding and did nothing other than skate. I lived my best life, but nothing else was going on in my head and I started to put pressure on myself. I felt like as I was being paid to skateboard I had to do it “seriously”, be consistent so I thought that I deserved it. But then skateboarding wasn’t as fun as it was when I was skating before getting paid and it fucked my mind up for a little bit. So now the fact of not being paid by skateboarding anymore puts this pressure away and I kinda feel free again.

Have you been doing anything besides skating?

I started to play the guitar a year ago during the first lockdown. I was in the countryside with my girlfriend and her family and there was a classical guitar in the house, I thought it was the perfect timing to learn as I’ve always wanted to play. I have three guitars and I have played every day ever since.

What’s up now? What are your plans?

I have been working on a part with Elliot Bonnabel since last October, to be released before summer. And I’m also working on my CV to get a job and start a real adult life hahaha.

Yeah definitely. I’ve been avoiding adult life since I was a teenager because of school and studies, but now I feel more like an adult as I will have to find a real job besides skateboarding. 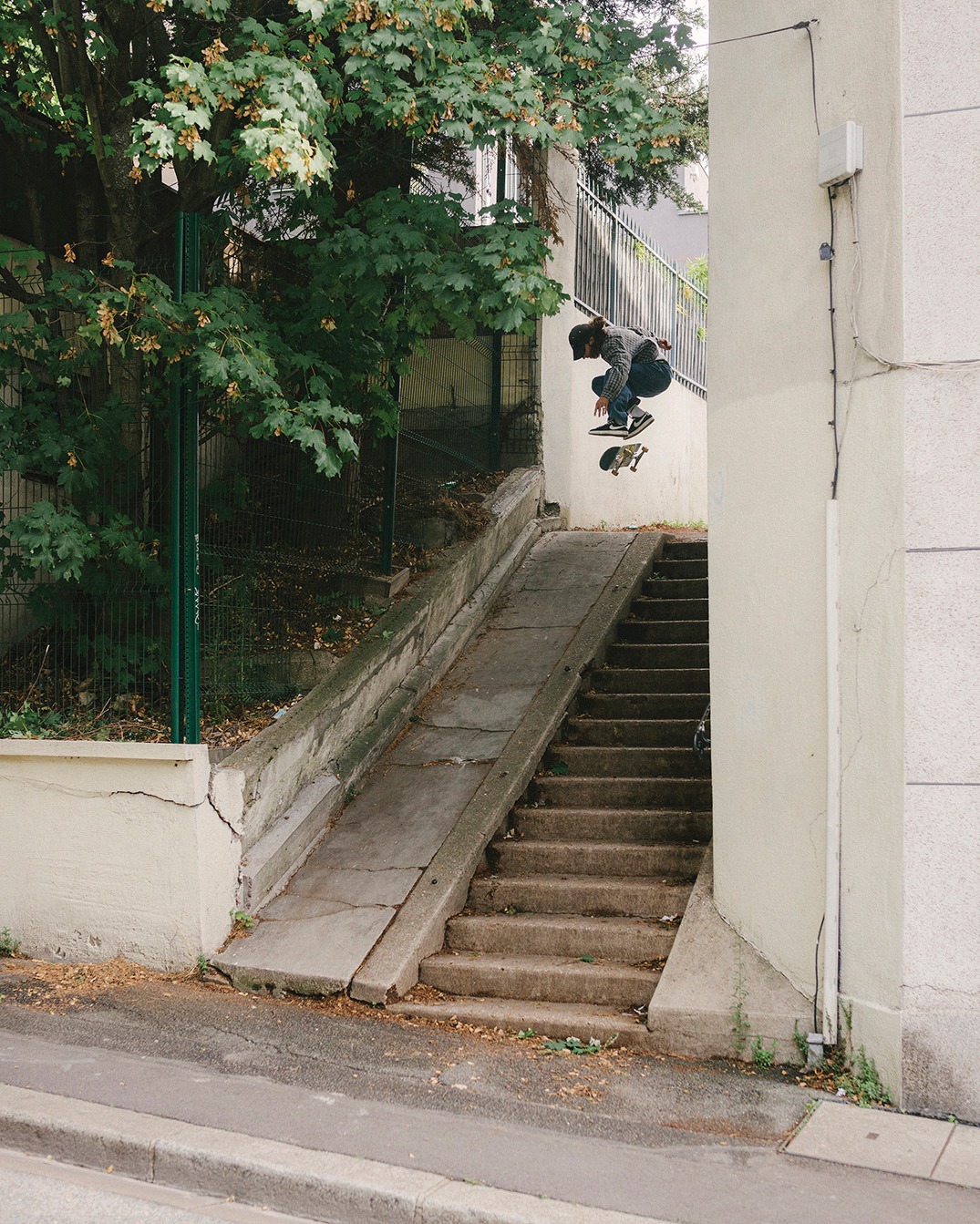 What kind of jobs have you been considering applying for? And what about things from a skating perspective?

I don’t know for the moment, honestly it’s been crazy in my mind these last few weeks so I’m trying to chill out and see how I can go on now. Yeah of course I’m still excited by skating, I have this part coming and I’m now skating for Levi’s with you, Fev and Edouard which gets me stoked!

You’re pretty obsessed with a few things, maybe even a bit more than I am sometimes. Can you name your biggest obsessing topics?

Pants. Going to the osteopath (shout out to Mr Lauferon) for my ankles. Removing logos from clothes. Trying not to choke when I eat, which is the reason why I eat so slowly. Eating at bakeries every time at lunch.

Where do they come from? And what makes them matter to you?

I think the things you’re getting obsessed with are following a trauma or something you really like. Those come from a little bit of both when it comes to me.

Do you ever feel satisfied?

Yeah, satisfaction comes sometimes after a few mistakes. Removing logos from my clothes started at the same time as I got interested in pants. I’ve always felt that a piece looks better without any logo. I got a box from Carhartt once but I unpatched the logo on a jacket and Joseph told me that he won’t send me clothes anymore hahaha.

From what I remember you unpatched the whole box, didn’t you?

Not exactly – I started with the Active Jacket and then I unpatched all of the clothes as I thought that the Carhartt logo was too big. 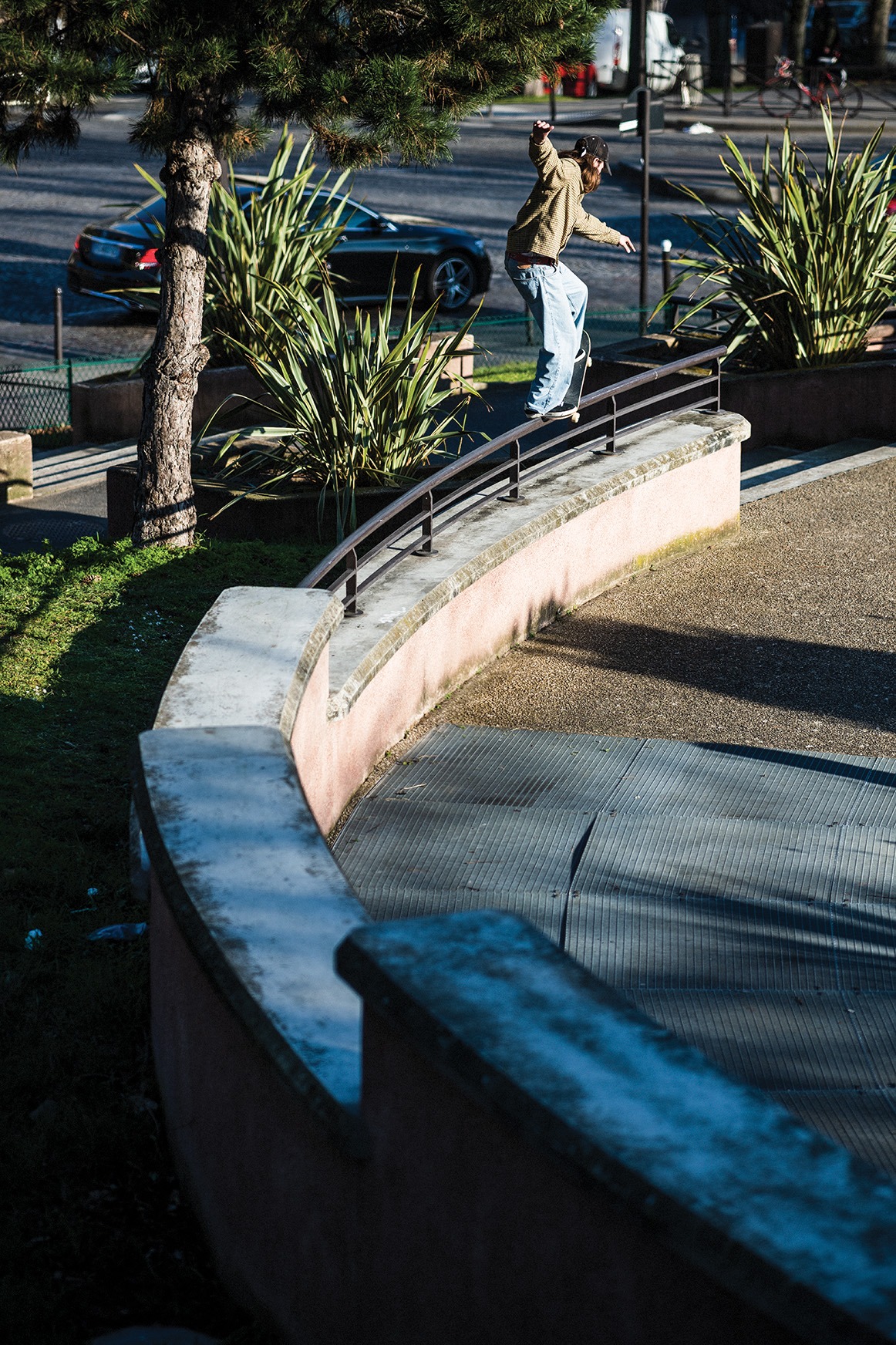 Haha it must be something like 8cm square, you’re tripping.

I’m doing alright today with the fear of choking when I eat, but one time I was in Barcelona with Nike and there was this big dinner with everyone. I was sat right between Colin and Vaughan, my team managers, and I remember feeling very impressed. The food came on the table and we were talking. I started eating but I almost choked and I had to excuse myself and go to the toilet… stressed out haha. I think I’m going to talk about the osteopath too. One time in 2016 I had a bad ankle injury and I didn’t take care of it, so it took more than six months to heal. Since then, when my ankles hurt even just a little bit I get worried and I feel like I need to see Jean-Lou to fix it.

Yeah I know, we are all visiting the same guy and he is actually always telling us about how you go and see him for no obvious reason.

Yeah, I think I just need to feel safe; as I was skating for a living I felt like my body always had to be in shape. I sometimes even visit him three times a week, and whenever I call him he just laughs at me and tells me to come and see him for a check up. Thanks a lot for your patience Jean-Lou!

You’re lucky that he is a very honest guy and doesn’t charge you when you’re going there for no reason.

And yeah bakeries… man I love them so much, good bread makes a good sandwich I’m telling you. Also, a great pastry makes the difference and can save a bad sandwich. Always with a bottle of water!

Is the day ruined when both are so-so?

Yeah, definitely it sucks but if it happens I get a cup of coffee and I feel better.

Well, knowing what you love can be a solid root to live a happy life I guess.

Looking forward to a happy future!

See some of these photos above in video form in Marca Barbier’s ’15 Times’ video part courtesy of Cinquieme Terrasse filmed by Elliott Bonnabel.

A very legit new part from Marca Barbier filmed in Paris courtesy of Cinquieme Terrasse. We highly recommend you watch this one!

With the release of GIDDY #10 and the accompanying article in Issue 8 we have decided to put the whole article online! Feast your eyes on some handsome French chaps in LA with lovely words by Val Bauer and photography by Maxime Verret.