Purveyor of awkward east coast spots handled with the utmost of style and accuracy, Leo Gutman drops this new part with us proving why he will always be one of Vague Mag’s favourites to watch. Filmed by Dmitry Brylev with additional filming by Cole Giordano and Taji Ameen. Read the Leo Gutman interview below by Guy Jones then get stuck into this Vague part!

Oi, oi how’s it going Leo? What have you been up to lately?

Good good, hanging out with my lady and our little cute Siberian cat at the moment. Things are good, the weather’s toning down in NYC, you can finally step outside without being drenched in sweat.

You hail from Staten Island which seems to have more media coverage as of late with the film of the same name and it playing host to What We Do In The Shadows sitcom, but how would you describe it/what would you shout about and what would you recommend to somebody visiting there?

So I actually grew up in Brooklyn, in Coney Island namely. Funny thing is, I have a little role in the King of Staten Island movie oddly enough.

I’ve spent enough time living in Staten Island to feel like somewhat of a local. It’s definitely not where my heart’s at but it can be a great place. It gets a lot of down-talk because of its generally more conservative population, and I definitely agree it’s not a good look. The skate community is not too thriving either unfortunately, but there’s a few good people who are from there that keep the spirit alive and make me say good things about the place. There are definitely some good skate spots out there as well. As far as visiting destinations it’s gotta be some of the pizza places of course. My favorite is “Joe and Pat’s”… but if you really want the truth, skip all that and go to “Best Pizza” or “Di Faras” in Brooklyn. 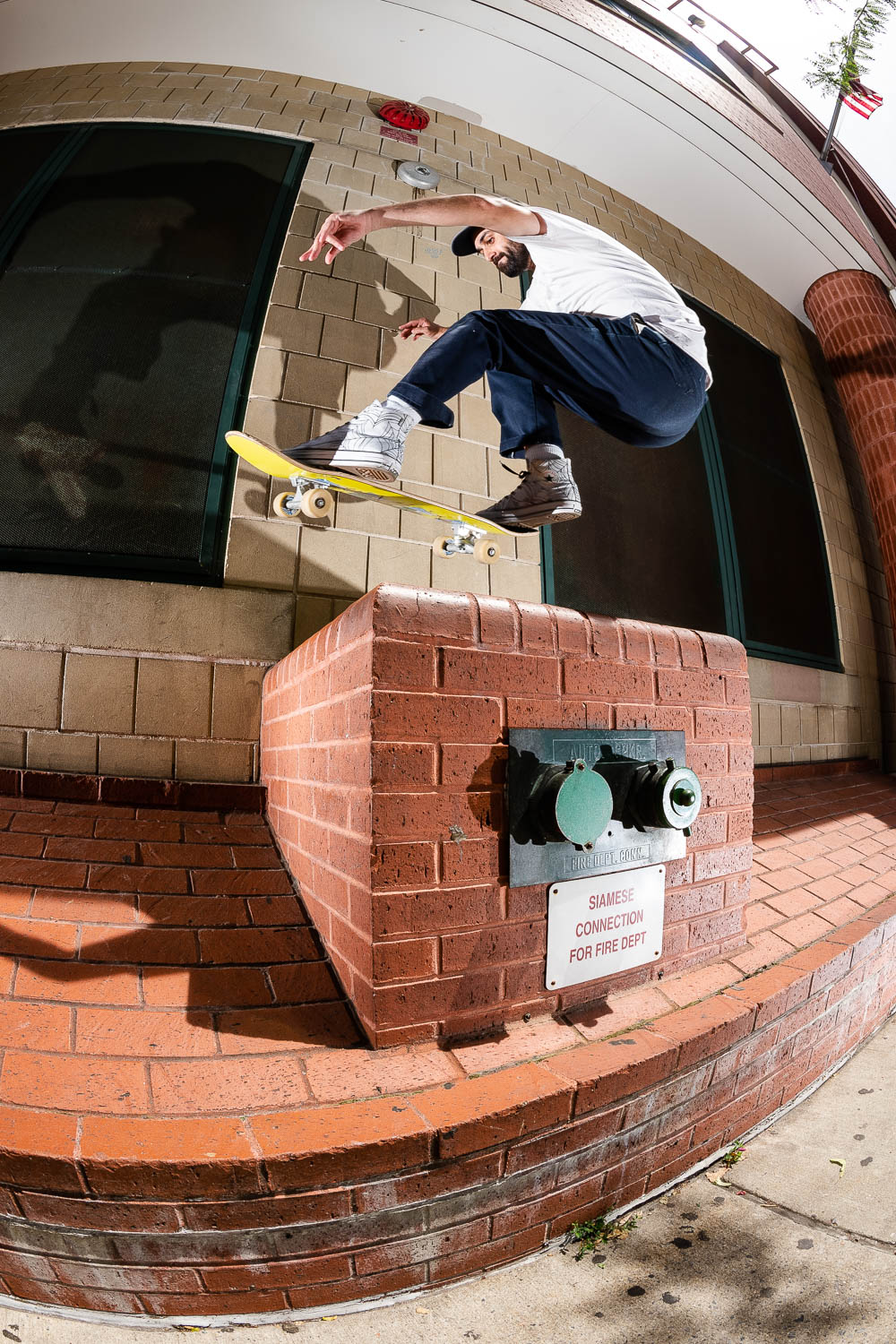 A few years ago our good friends at Free (Shout out Arthur, Will and the photographer) hosted one of your parts, which we’re obviously huge fans of. In the text it said how you admired European skateboarding, is this to make us feel better for admiring East Coast skating so much or a nostalgic homage to the early 90s Euro comp circuit tours?

Haha I mean, who doesn’t like the 90s euro comp tours!? Of course I love what both of your guys’ respective mags have done though, honestly. The first videos I ever watched were the East Coast classics EST and Peep This. However one of my first actual skate obsessions was watching the Blueprint videos, trying to emulate those guys skating. The spot selection, music and style was like nothing I’ve ever seen before. I still have this nostalgic feel when watching the British parts on Vague, thinking back on a young Nick Jensen connecting lines into parking garages. What Free is doing is amazing as well, this same sense of nostalgia comes into mind. Watching a new Luypa Sin part brings a smile to my face. Now I just want to go skate these incredible looking European skate spots.

Is there anywhere in Europe you’re particularly fond of and do you have any stories from that visit? Also anywhere on the bucket list to come visit?

I was actually born in Moldova, spent some of my formative years out there. Maybe that’s why I have this Euro centric approach. Either way, I have this idea to one day go back to the former Soviet sector on a skate trip possibly. I had a cup of coffee in Budapest, not long enough to really skate and it really intrigued me. Prague was incredible of course, in a different light than what I’m used to skating though… some very nice marble plazas. I think I like these cities the most because they are more on the unexplored path as far as media coverage goes. That’s just what the bucket list with European skating is for me honestly, unexplored territories. 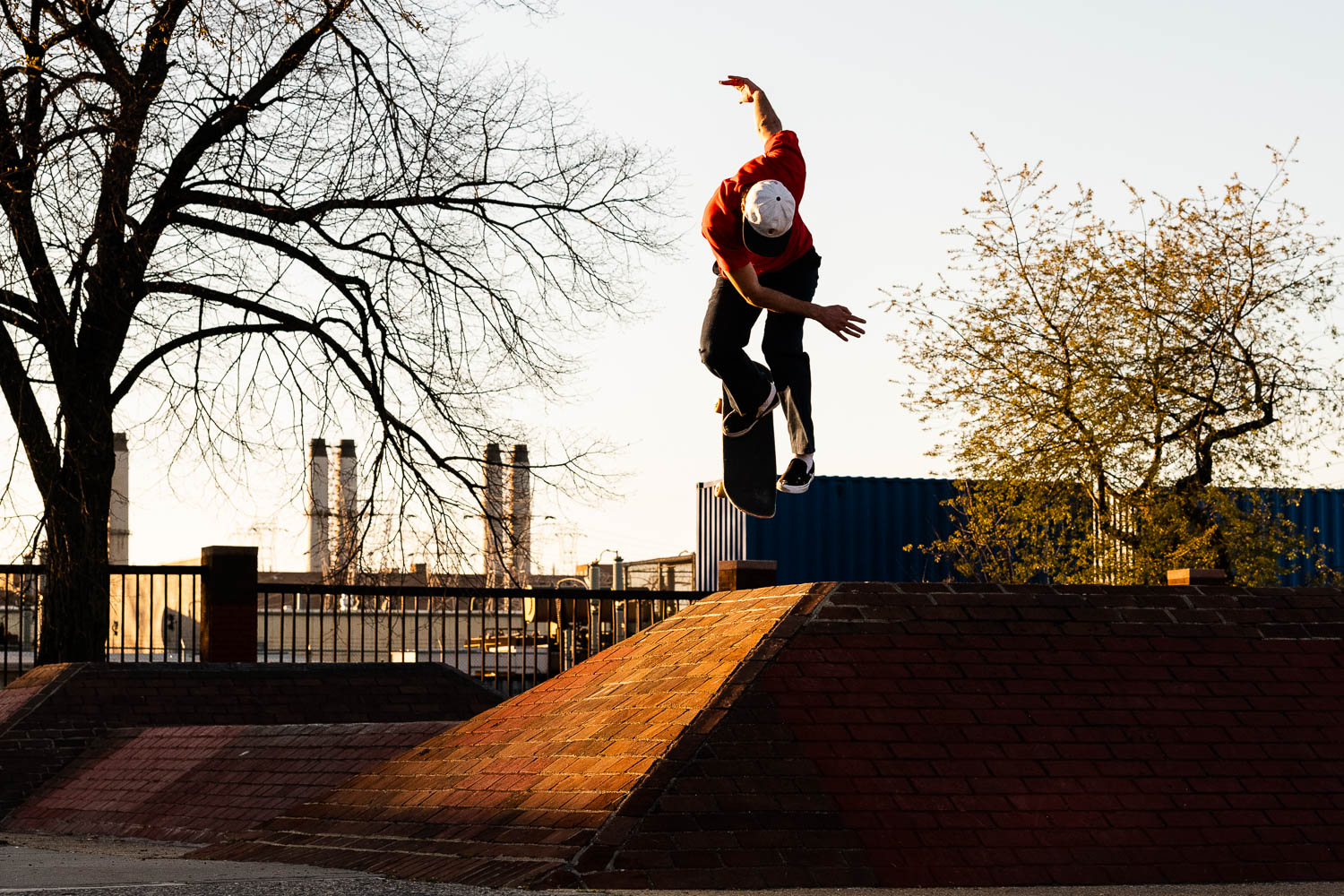 A consistency in your parts is the tri-factor blend of creativity, gnar and accuracy. Do you use up all of these three things in your skating leaving the tank empty for everyday tasks, for example missing your face when trying to brush your teeth and being too scared to walk down the road due to an ominous looking kitten sitting nearby?

I am basically left useless and am constantly barraged with everyday banal tasks that my crippled ass can’t competently complete. I have a Siberian forest cat to take care of the ominous kittens. My girlfriend is just basically my arms and legs for most other things, after all what’s a skateboarder without a girlfriend? Love you Brookie.

Another consistency I’ve noticed is the blend between really well known spots to ones that are scarcely seen documented, do you go on spot finding missions with Dimitry and Cole, and do you let people know your discoveries if so? I guess the one I’m most curious about is the bump to tree stump you tres flip, which is so, so sick.

One of my friends from that neighbourhood of South Brooklyn had a story up of him and his friend skating the tree as it had just collapsed. I had to jump on the opportunity and ask the fellow SoBro where the spot was, and he obliged thankfully (shoutout Tom Mikos). Other than that I think I go in and out of moods with spot hunting. I’m mostly on Google Maps by myself looking through street views to try and find something new. However ever since I’ve moved out to Queens I’ve been biking around, it definitely helps to find the spots in person and it’s super rewarding. 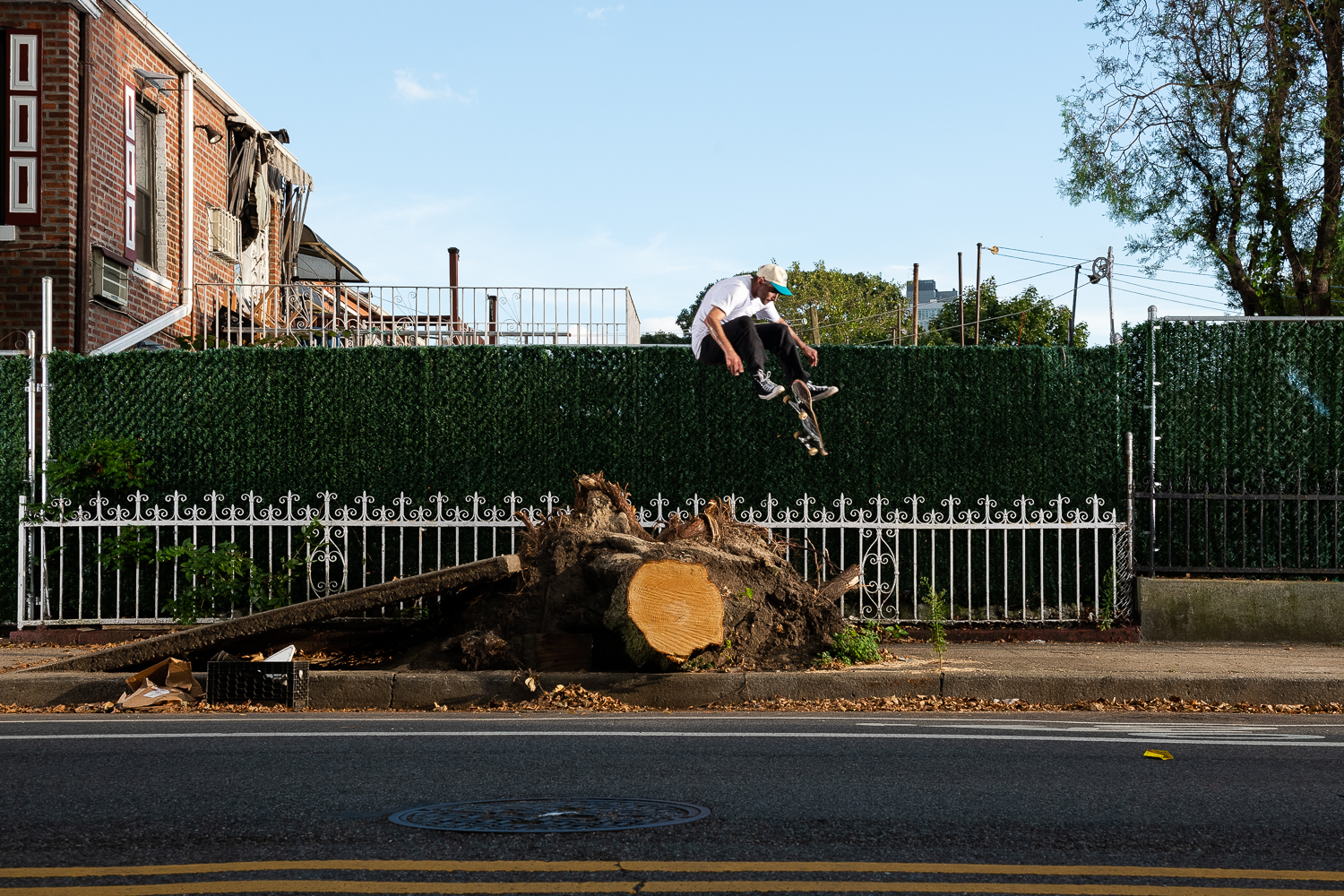 As seen in the contents spread for Issue 21

You’ve always had an active output of visually appealing offerings, what were some of the challenges and highlights about filming this latest part? Song’s a banger too mind!

Thank you, I appreciate that! The toughest part was making time to document it all quite honestly. Gotta thank big dog Dmitry for logging the heavy hours on this clip! We’re all growing older and have to work full time jobs… NYC is an unforgiving and expensive place. This was all documented over a span of three years, had to dust the cobwebs off some of the clips. And the song I think I just randomly heard played somewhere and thought it would go good with the part, I love Gill Scott’s music though definitely.

I’ve noticed a few footy (soccer) shirts making appearances in your attire, do you play? If so, is there a team you support internationally and club level?

Oh yeah I love footy! I did play pickup a bunch back in the day, a little after work Sunday League for a bit also. I’m the keeper so I got ran over a bunch and it got a bit too costly after a while so I couldn’t really skate if I was hurt. I was a Man-U fan for a little while when they had Van Persie, Rooney, De Gea… such a fun club to watch. Nowadays I don’t have anyone to root for really, haven’t watched a full match in ages. I am an undercover jock most likely, I spend too much time watching ice hockey. I need to get my heart back into footy, gotta watch a match or two! 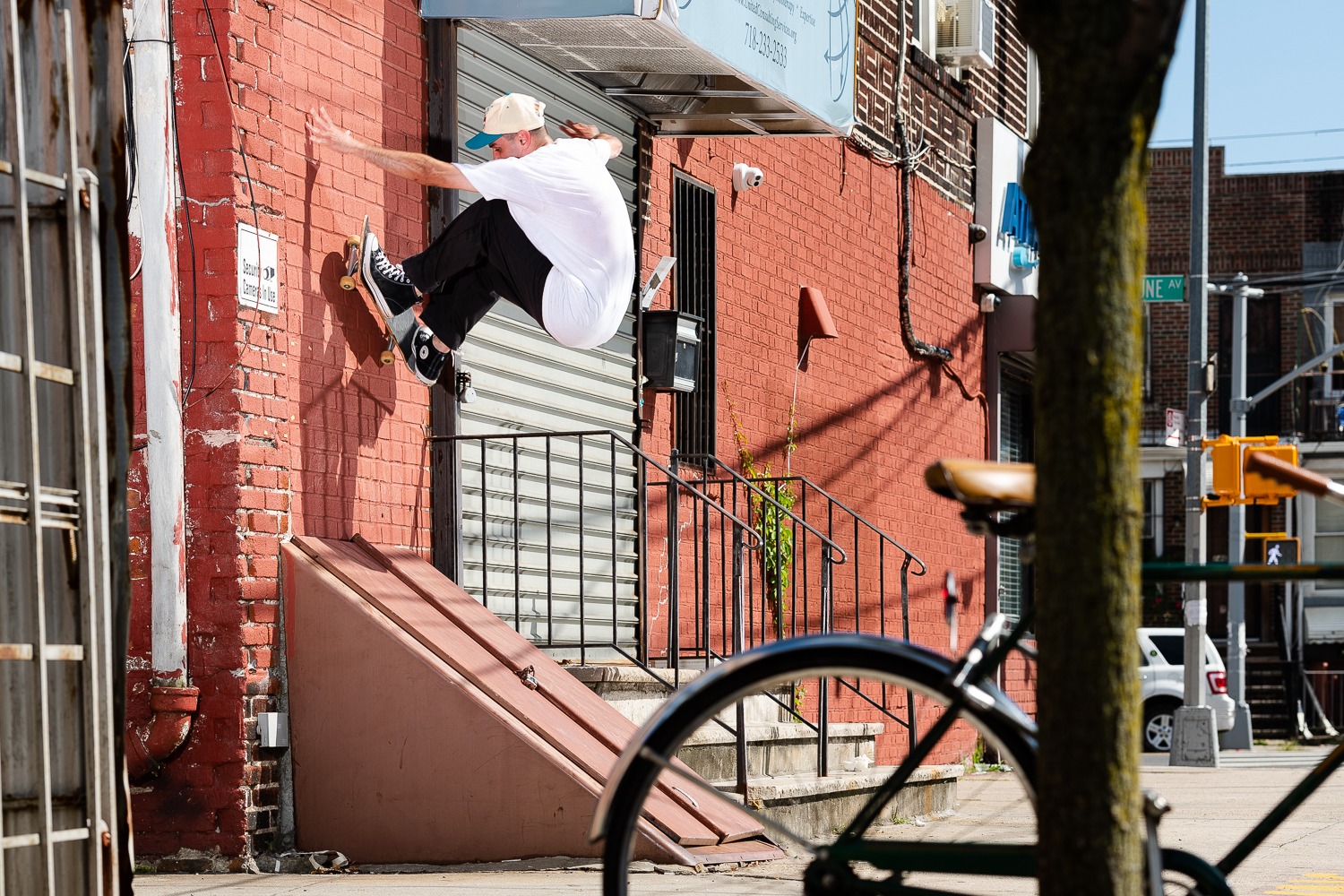 You surround yourself with like minded creatives such as Cole Giordano, Connor Kammerer and Colin Read, what is it about people whose names begin with the letter C that appeals to you most, and would you like to dish any dirt on these fine folk?

Great people those three are. The Cs are dedicated to the arts, probably an inherently C kinda thing. Connor is good at absolutely anything he attempts, natural talent. Come to think of it Colin and Cole are also savants. Dirt? Colin threatened to turn me into a cockroach as my spirit animal for Spirit Quest. I lucked out and he changed me back into a tuatara. 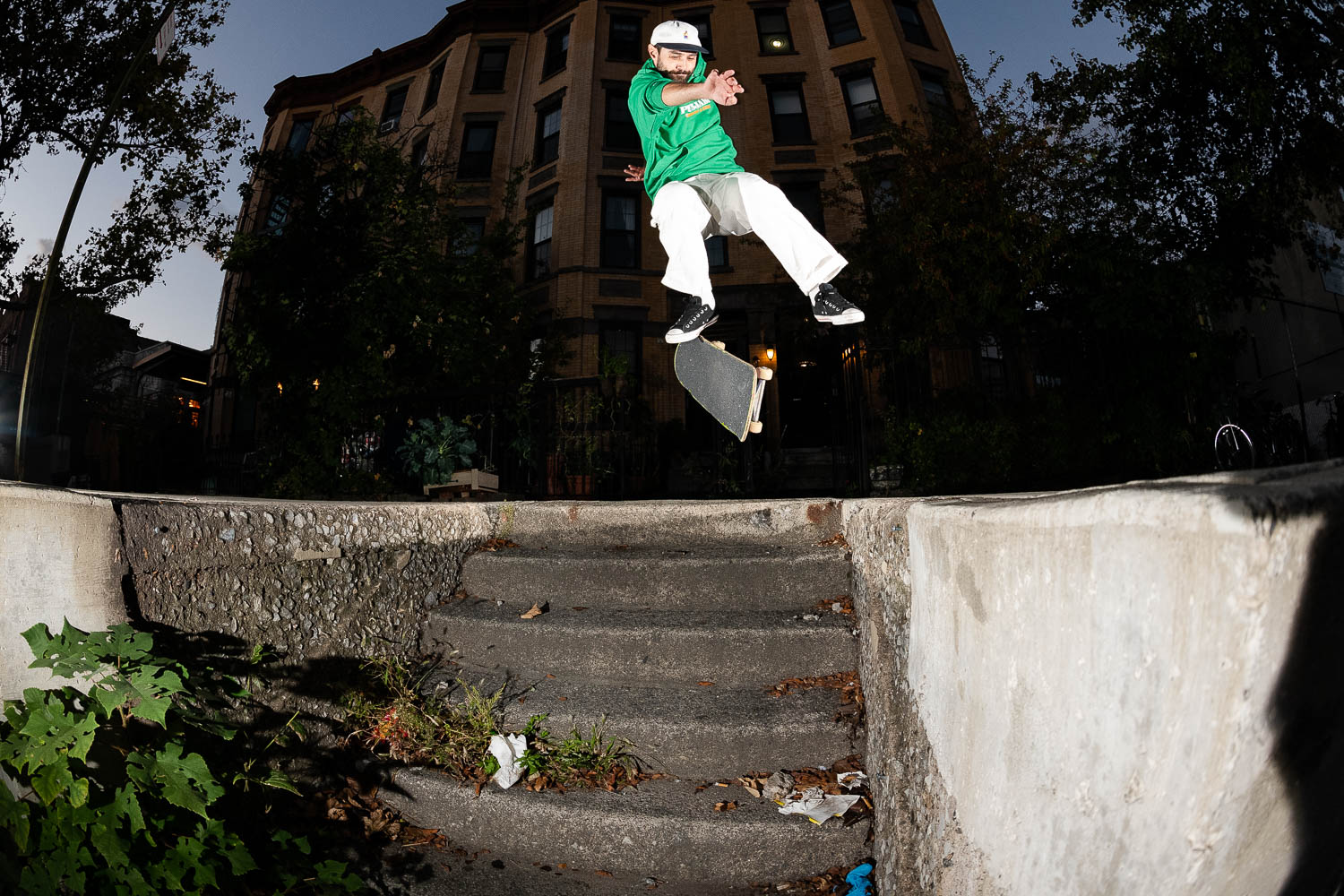 On this subject how was it shooting the pinhole Converse campaign? The whole concept was amazing and the result was so good!

That was incredible, it was mostly created by Colin and his friend Eric Schleicher. Doing a kickflip, even when stationary, in pitch darkness with a sudden burst of flash is really disorienting. The pinhole was wrapped around this hula-hoop looking ring that took about ten minutes to load with film if not longer. Mind you, these guys loaded it in complete darkness. All I had to do is flick a kickflip or an ollie, and I inevitably messed up a few. I was definitely sweating a bit thinking these guys would hate me, luckily it worked out for the best and there was at least one flick in there that came out. 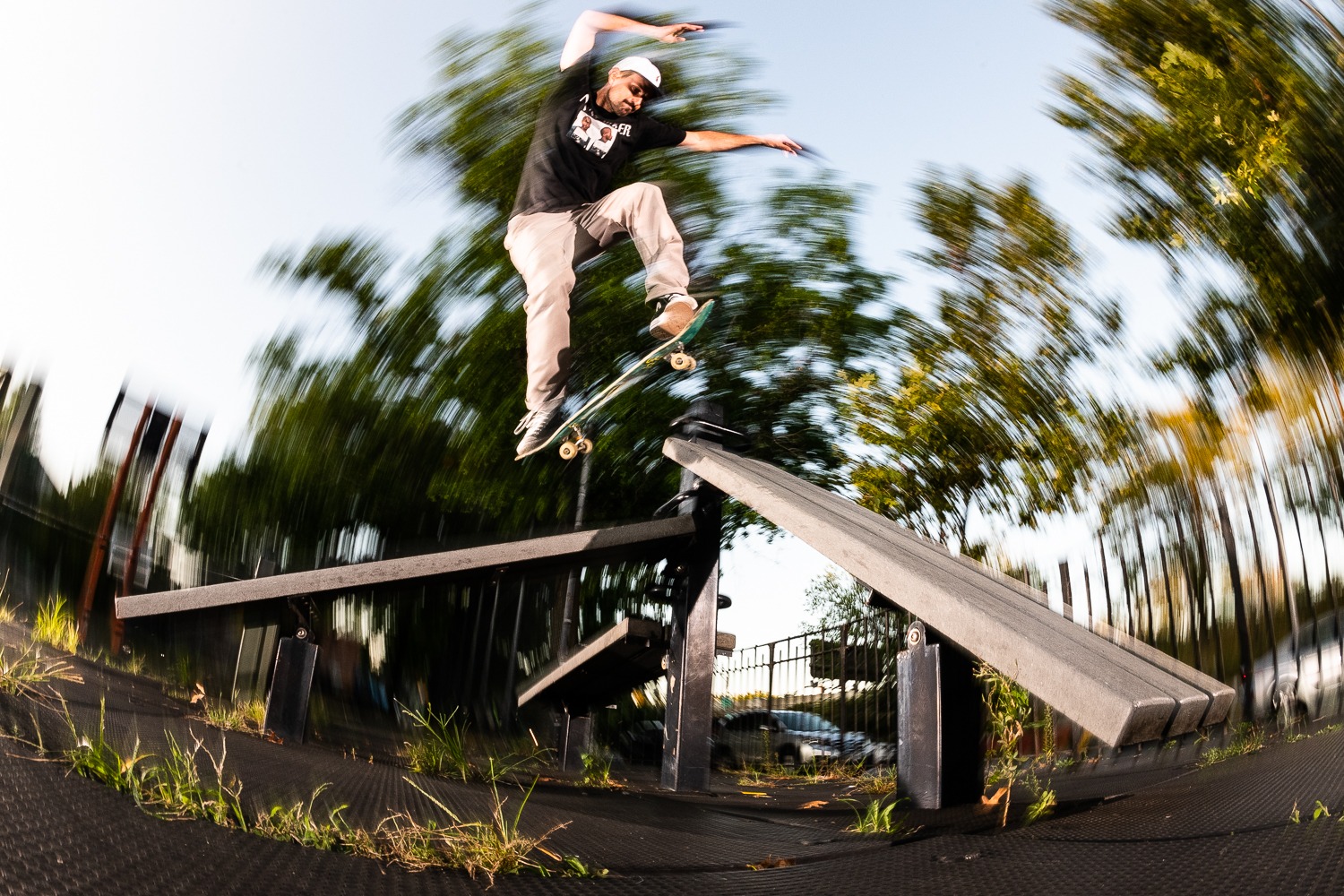 Leo Gutman – Ollie Up, Frontside 180 To Switch Ride Down On Other Bench  ~ Photo by: Cole Giordano

Would it be alright if you could end this with a few recommendations? Book, Music, film, food and absolutely anything else?

Right on, thank you Guy and Vague!

I’ve really been into a few documentaries as of late. “Some Kind of Heaven” “Moments Like This Never Last” and “The Streets are Talking” (shoutout Jeremy Elkin) are a few of the heavy hitters I’ve seen of late. Peace!

The full extended interview with Stoop Mag's Eby Ghafarian from our 21st Issue. Interview by Jono Coote. Read it here!