As you might have seen, Hold Tight Henry’s latest edit ‘Overcroft‘ just dropped which heavily featured Joel Banner alongside good friend Jeremy Jones. So we thought it would be good timing to share Joel’s interview from Issue 9 of the mag. Read how Joel recently survived an almost life changing accident just before this interview surfaced. Heal up soon Joel mate!

Introduction: As you may have guessed from the imagery in this intro, Joel suffered some broken bones around the time this interview took place. Despite having numerous wrist breakages it’s almost less surprising that he did it off his board, as anyone who’s witnessed him shredding in the last 2 years know he’s on another level, with the rare combination of utmost modesty. You’ll see lots more of this absolute beast in the near future but all we can say is cheers Joel and stay sound as fuck! It’s defo working for you player! 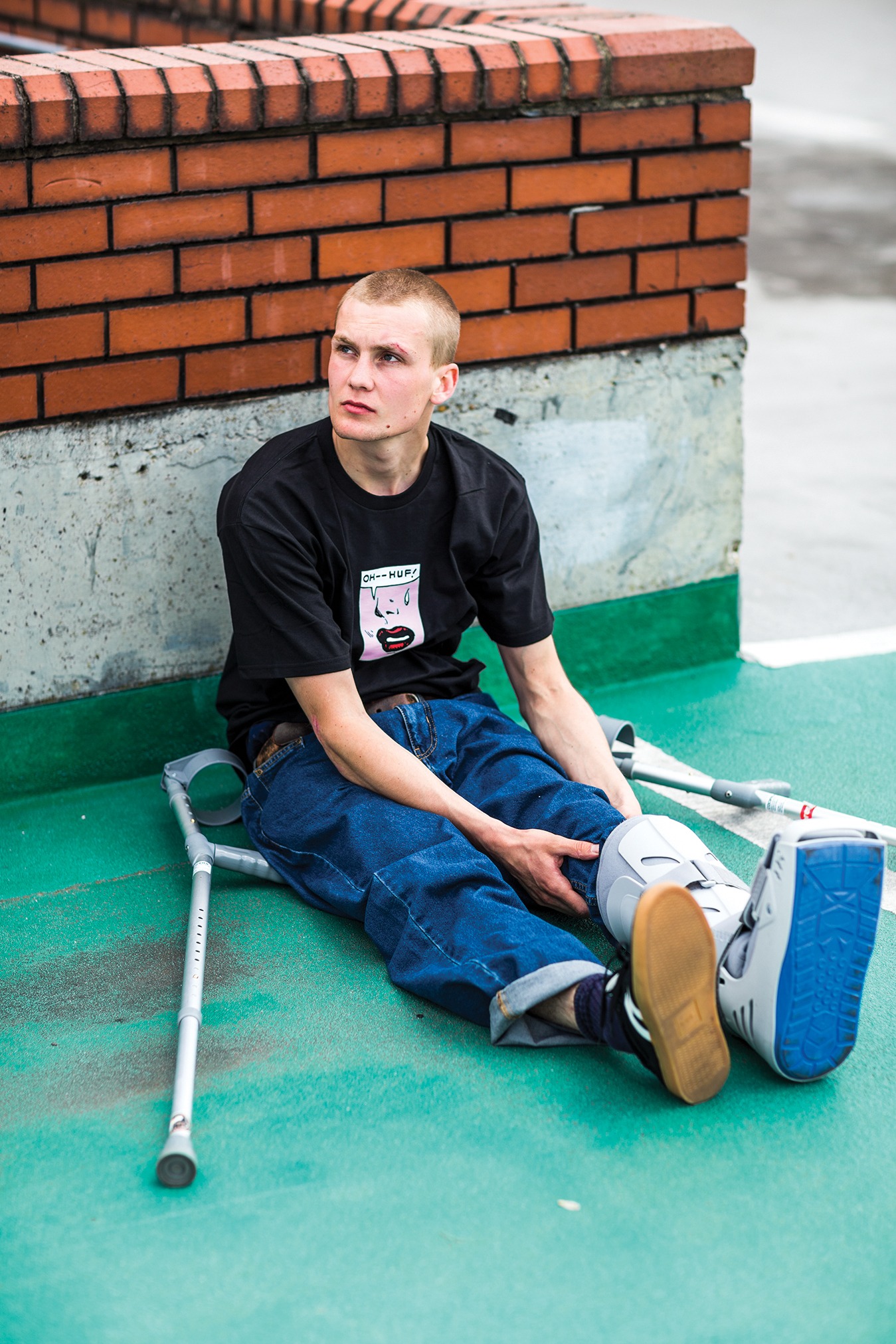 Yes Joel! I’m sure you’re sick of talking about it but could you tell us your current state and what happened? I definitely jumped on the Asahi free beer train as well and it seemed to almost destroy every skateboarder in South London.

Yo dawg! So at the end of that night I couldn’t get back home to South West because there’s no trains as it was like 4:30 in the morning. I was on the phone, whilst skating down this road. I finished talking to my homie, whose house I arranged to stay at and that’s the last thing I remember. Next thing I know I’m lying curb side holding my leg, which is now at a 45 degree angle below the knee and dark red blood is seeping out my trousers. I can’t actually remember getting hit by the motorbike, because I hit my head pretty bad. I was knocked clean out, also managed to split my eyebrow open and chip some teeth in the process too. Luckily the guy who hit me called the ambulance and eventually it came. They gave me some pretty potent pain relief and that’s that. I can’t remember anything else, probably for the best. The next day I had a 6 hour operation and ended up staying in hospital for 7 days after. They gave me what’s called an ‘intramedullary rod’. So they pretty much put a big bolt through the inside of my tibia (shinbone) and it’s held in place by screws at the knee and ankle. Not the one. 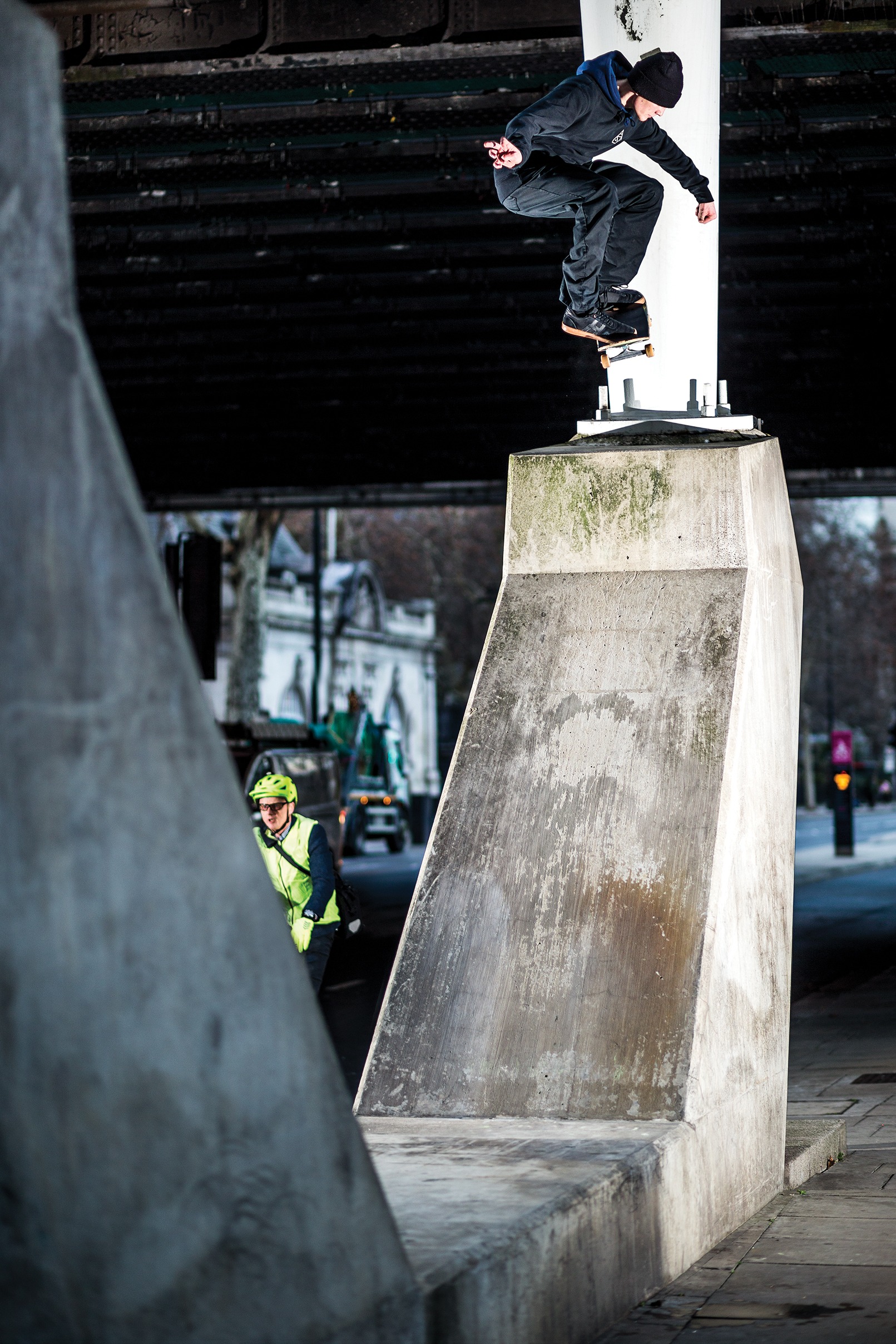 Despite the downtime your productivity rate is insane! Is this because you hate talking to people and would rather skate or do the squad just get you hyped? Because I affiliate you with a range of filmers and photographers.

Shit man I’m not sure about that, but the STOON boys definitely get me hyped to go skate the most. They are the crew from Kingston ways who I grew up skating with. Too many names to mention but they’re also bunch of lazy fuckers though, so I usually just hop on a train up to central and end up skating with whoever is keen. 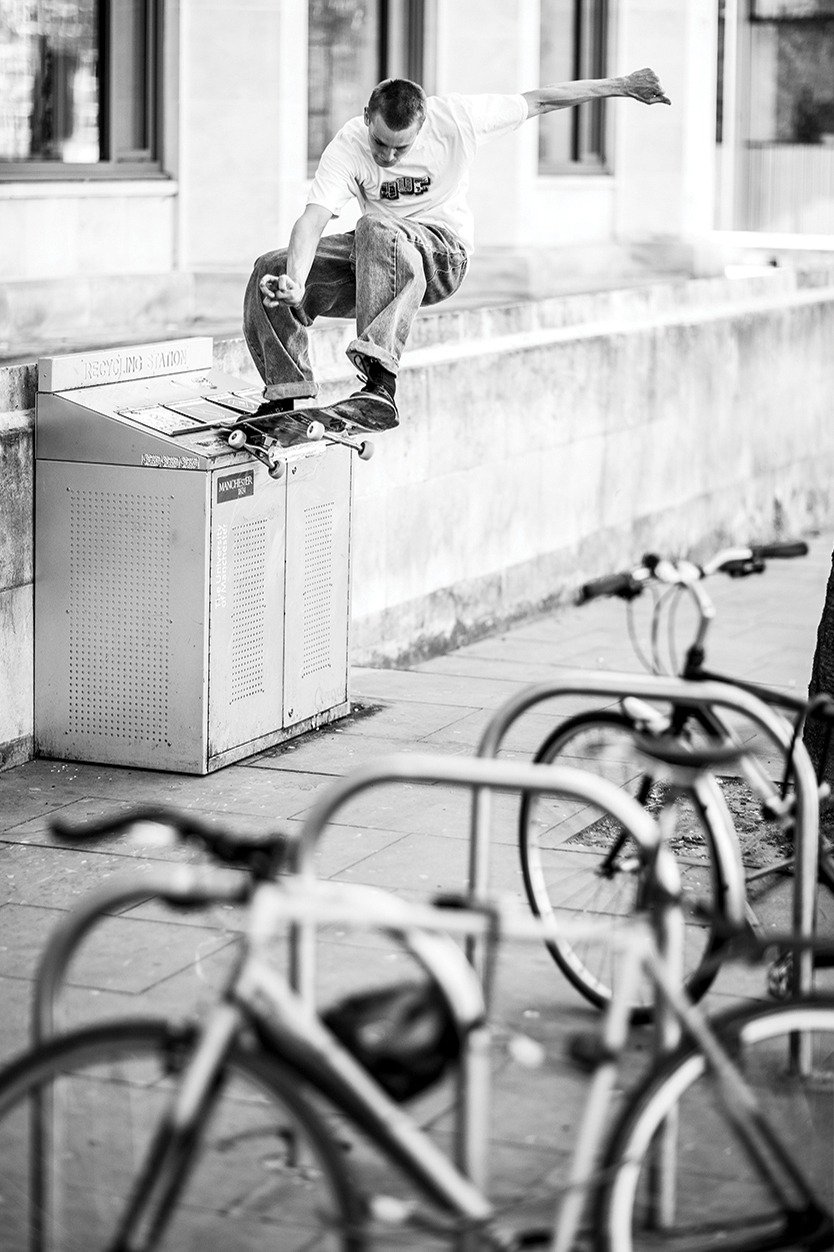 Now you’re in recovery mode, how have you been occupying yourself?

I’ve definitely made an effort to try and stay as productive as I can. I feel like when you’re injured you gotta keep busy and try do shit you wouldn’t have done otherwise with your time. You gotta do something positive somehow. I’m doing as much physio as I can but I’m also getting real stoked on art again. I’ve been fucking around with some animation shit aswell. Just trying to teach myself some new things whilst I’m disabled. 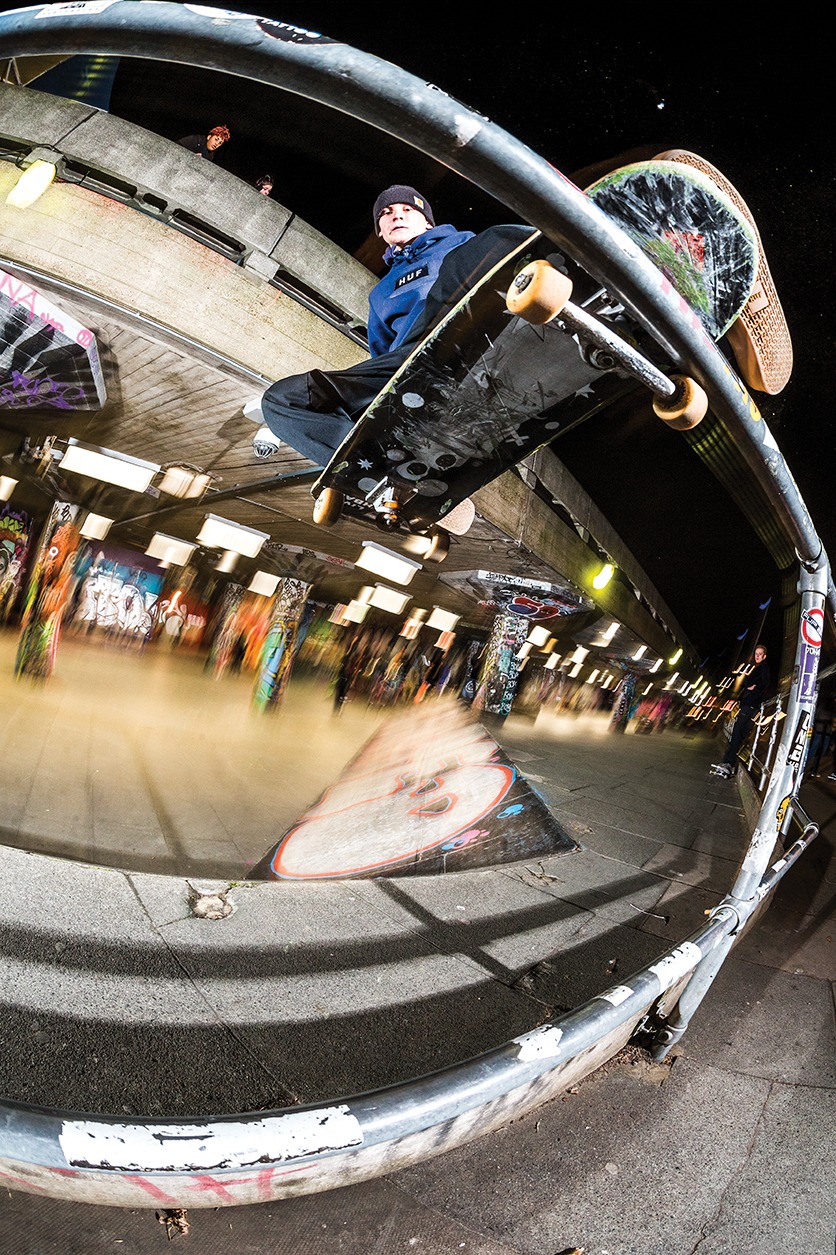 Southbank has kind somewhat of a mecca for Kingston skaters like yourself, why is that and was it encouraged by Jezza Jones?

I guess it just works out because Kingston to Waterloo is only one train. I reckon that everyone ends up at SB so much because it’s a convenience more than anything else. But SB is SB. It’s a vortex, you get stuck there. It’s so hit and miss. Some of the people who hang out there and don’t skate suck. Also sometimes you feel like a zoo animal because of the people watching and taking pictures, but then it’s also my favourite place to skate, there’s such an endless amount of ways to skate it and  how can you not get stoked there when you can watch someone like Jezza, Foxy (Tom Fox) or Twiggy (Cam Gooden) cruise that place all day. You know they’re all Kingston OG’s too. 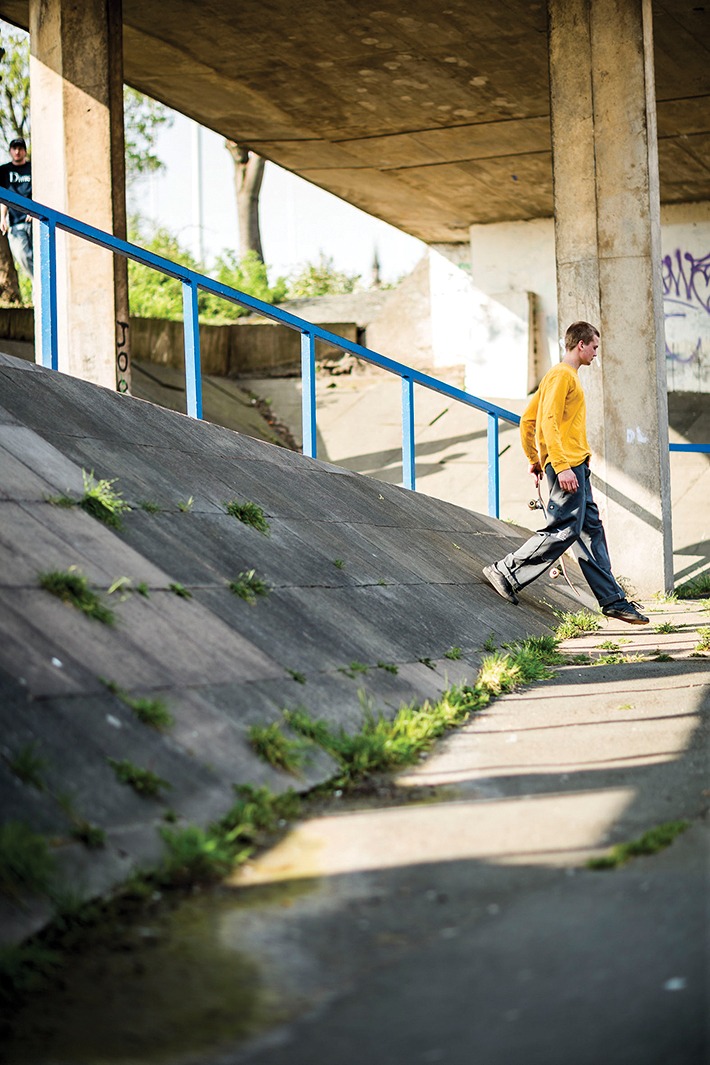 How did you and JZA Jones meet and was it through a shared admiration of cartoon funnymen and have you always been obsessed with young Bartholomew Simpson?

I’ve known Jezza pretty much since I started skating, he was always the ginger guy with steeze from the older lot of Kingston heads, everyone tried to skate like him back in day. Man, Kingston has had so many gnarly skaters come and go through the years, Aaron Sweeney was the champ though. But yeah man it’s pretty hard to not love The Simpsons right? Not sure why I got stuck with Bart though, I think it’s because I used to look like the picture of Bart someone made into human form, if you know the one I’m talking about. 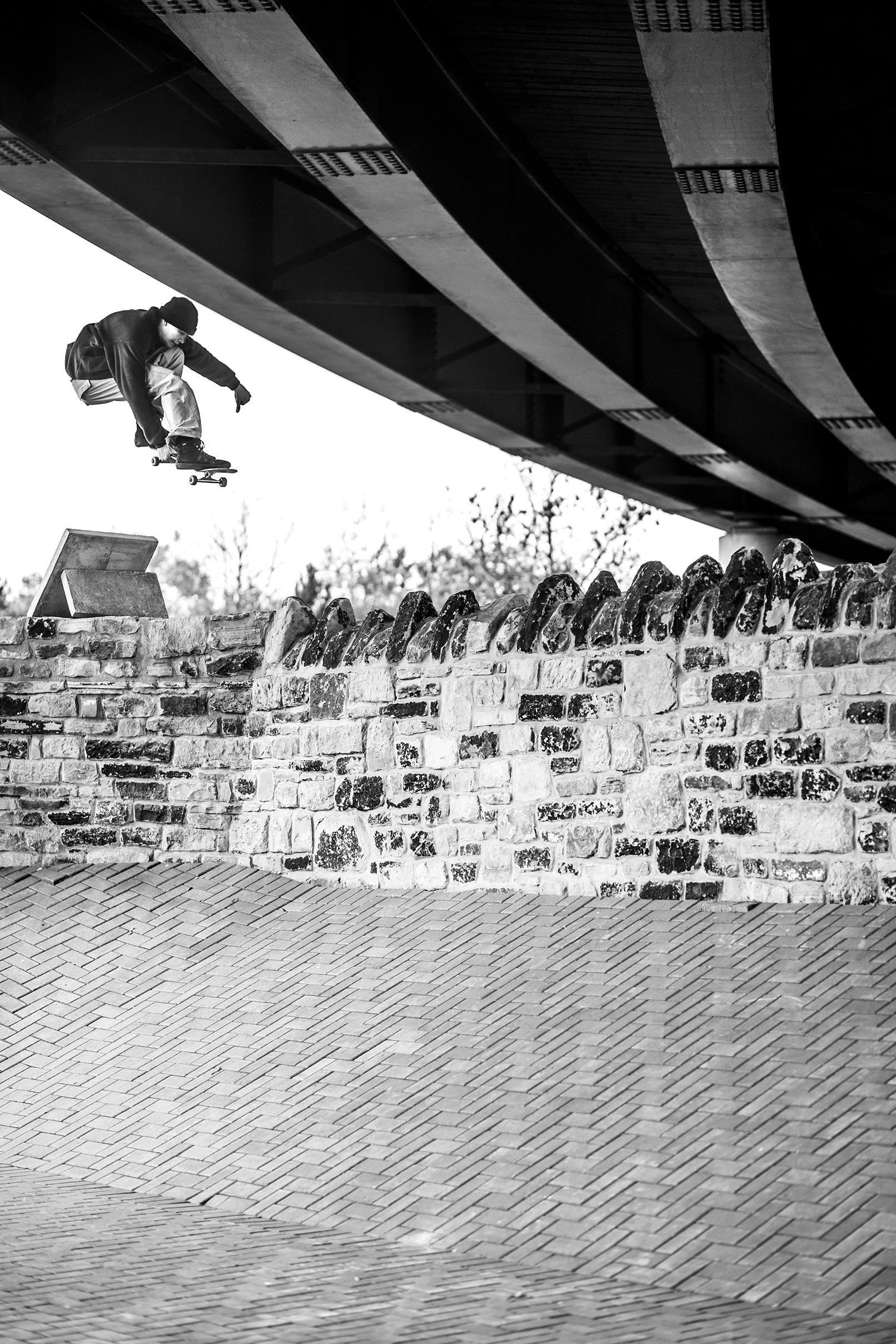 (Laughs) yeah that’s sick! Southbank is as wild as it is eclectic and the gnarl range fluctuates on the regs. Have you got any good tales from the Undercroft?

A lot of shit goes down at SB on the regular, I remember one time I was trying to film a line, next thing I know a bunch of dons in balaclavas rolled in with knifes and robbed basically everyone for their phones, weed and money. Whilst all this was going down I just kept trying to get this clip and they didn’t even come near to us. But Austin (Bristow) had his bag with over £1000 worth of camera equipment right there and they didn’t even look twice at it. Dumb guys. 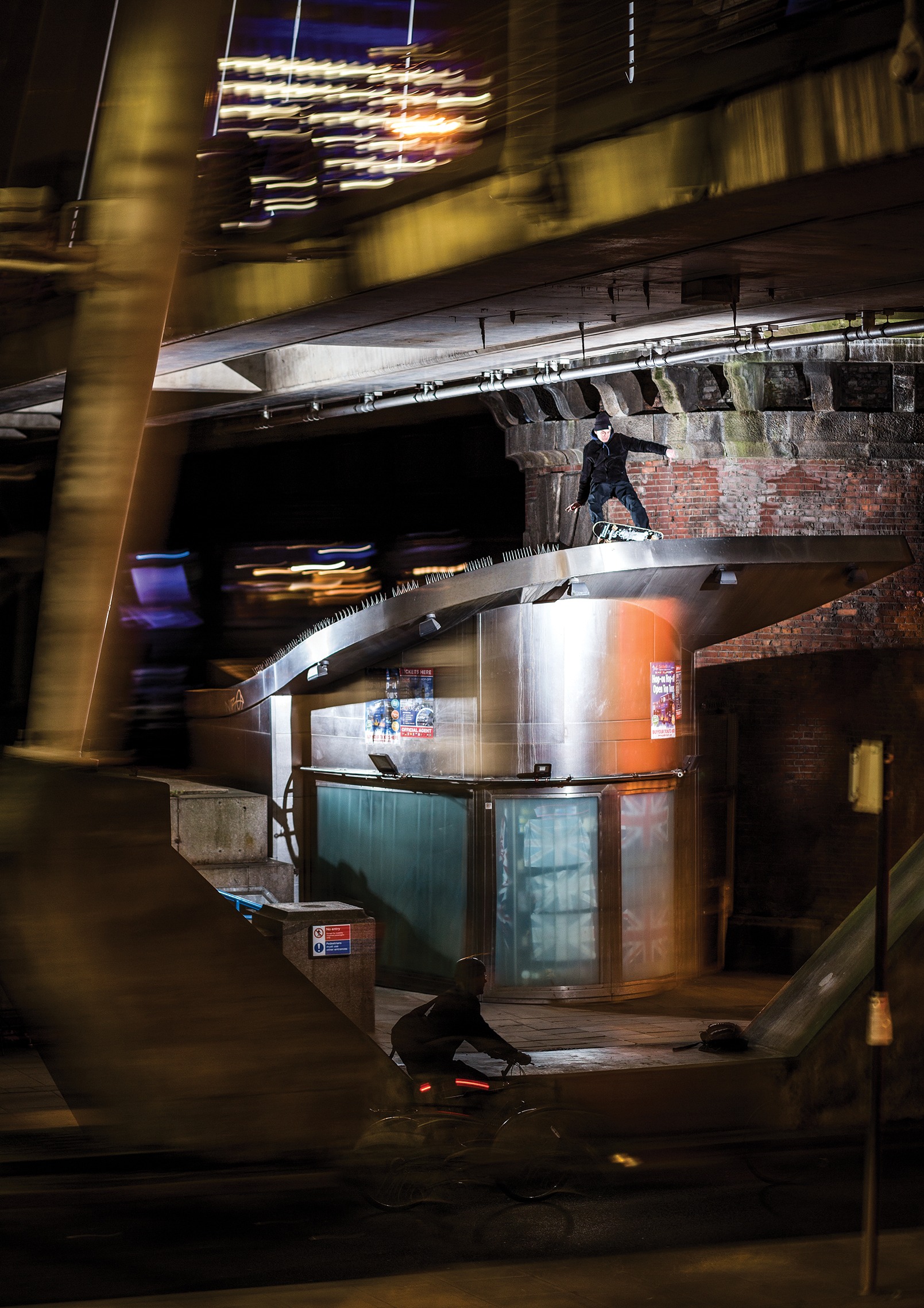 I heard the reason you shave your head is because you used to have dreads back in the day, is there any truth to this?

(Laughs). Man I wish there was truth to this, imagine me rocking dreads back in the day. I did used to have super long hair though. 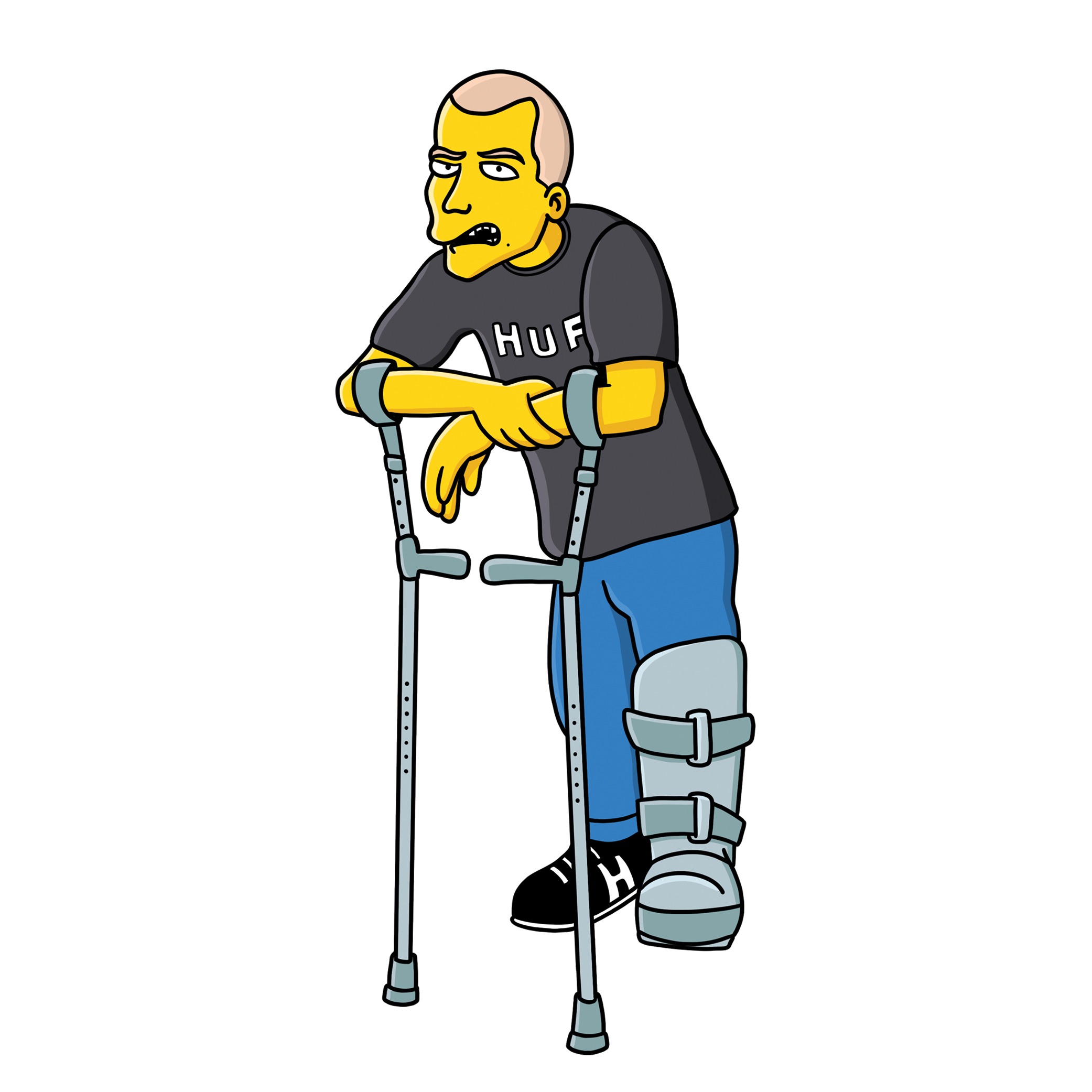 Didn’t you used to make pizzas at festivals for a while? There must have been some good stories from there? Ever put M-CAT as a topping?

Working at those festivals is always chaos, because you’re in a van with a huge 500 degree pizza oven, every time you do a late night shift all these zombie looking people start to appear and slowly start gravitating towards the fire in the oven, usually gurning their faces off, it’s definitely a sight to see. Not sure about M-CAT though but definitely there have been some intoxicating pizzas made. 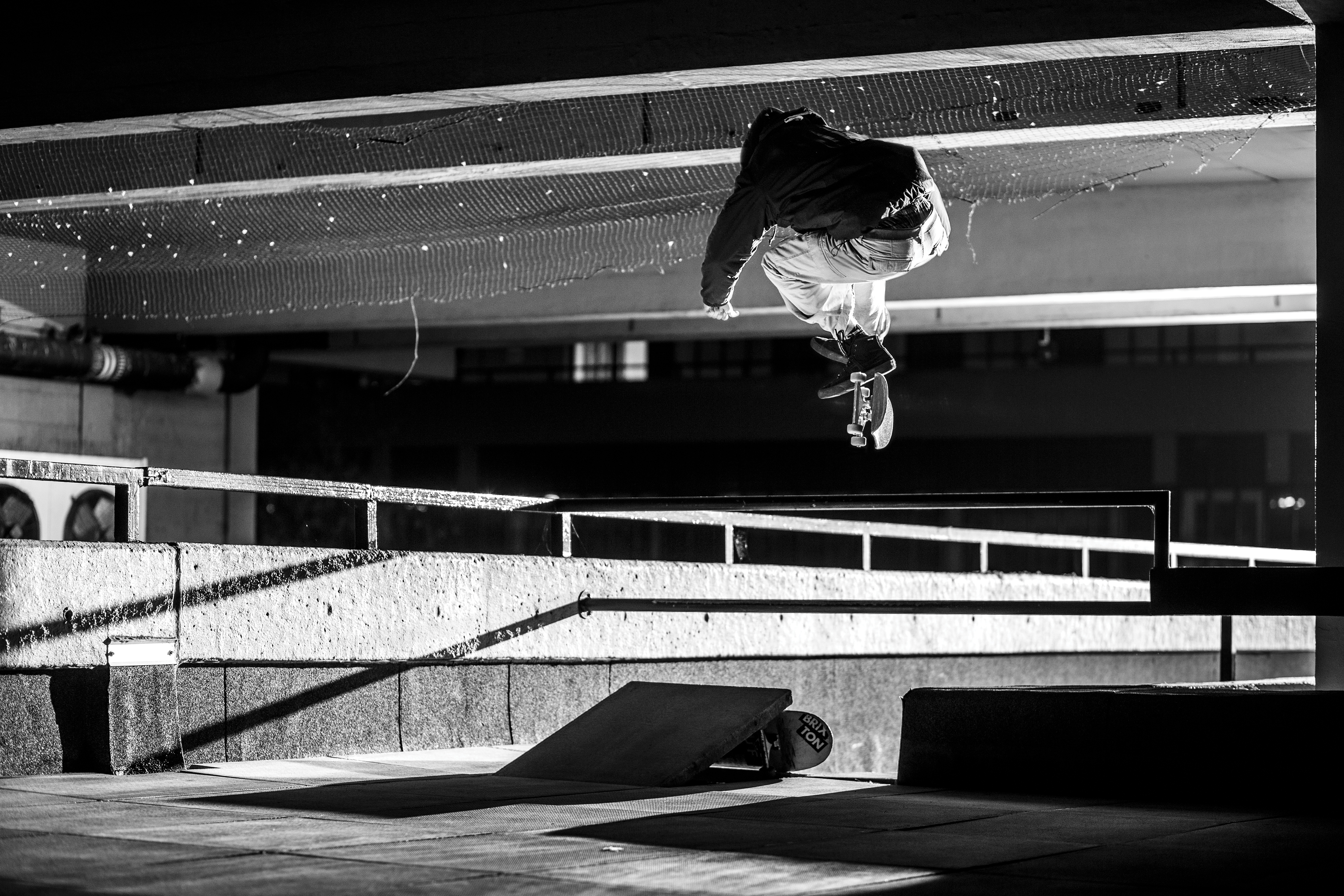 What is the funkiest thing about Kingston and is there a lot of pride regarding ‘The Good Life’ there due to it’s filming being in Surbiton?

There’s no good life in Kingston. 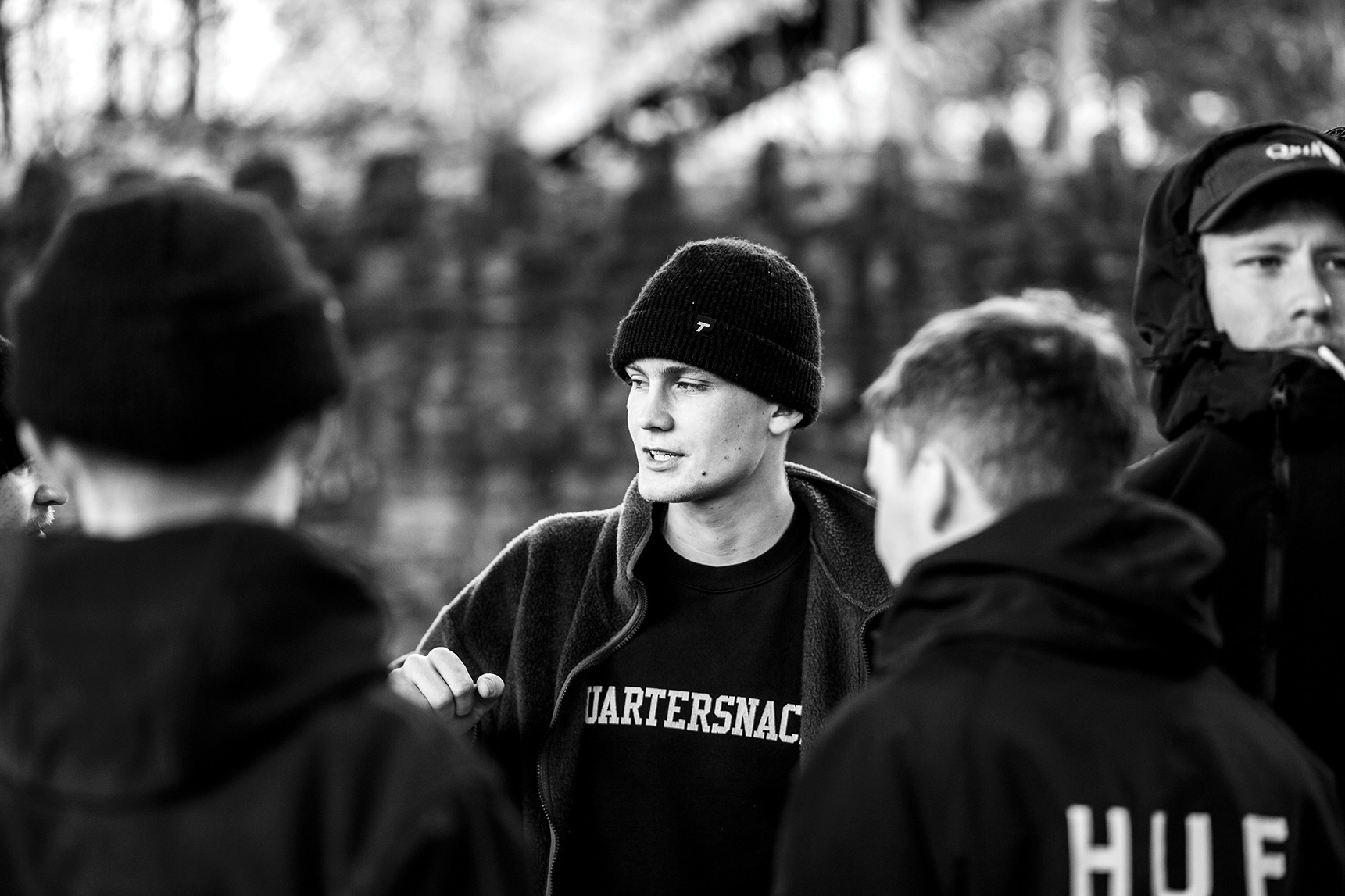 You got on the HUF UK team around a year and a bit ago and have been on a few missions around the UK, how has that been and who’s your secret best mate on the squad?

Going on missions with big Jim and the HUF boys has been the best, shout out to ‘Out of Step’. Everyone is hilarious in their own way. Everyone kills it as well. When everyone gets together there’s such a large amount of stoke it’s so sick to watch. Such good times but Tom Delion is the GOAT. 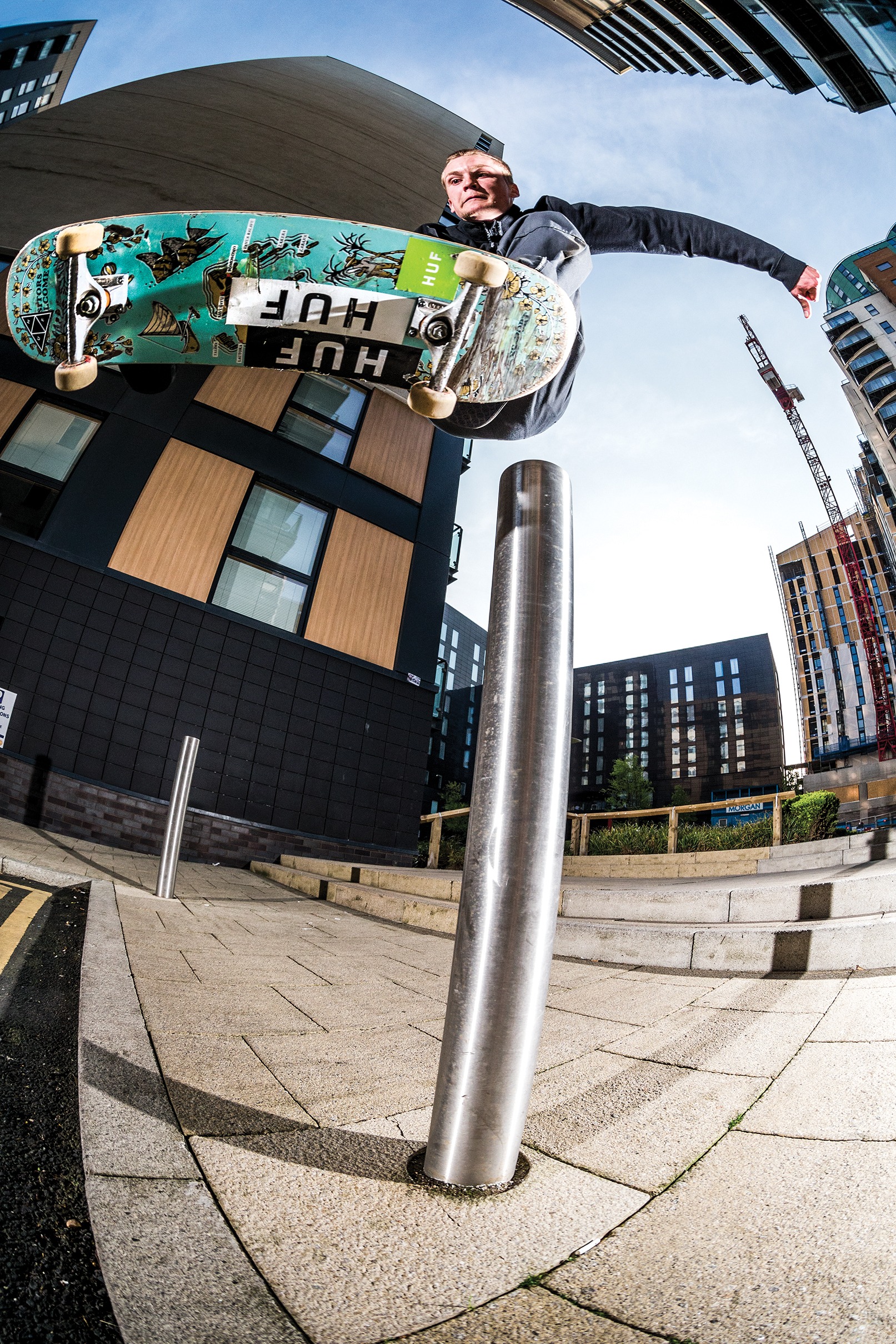 Have you ever met Fenton the dog star who chased the deer at Richmond Park?

Yo, so many people claim to know that guy,  unfortunately I don’t, but I feel like I’ve seen him though. 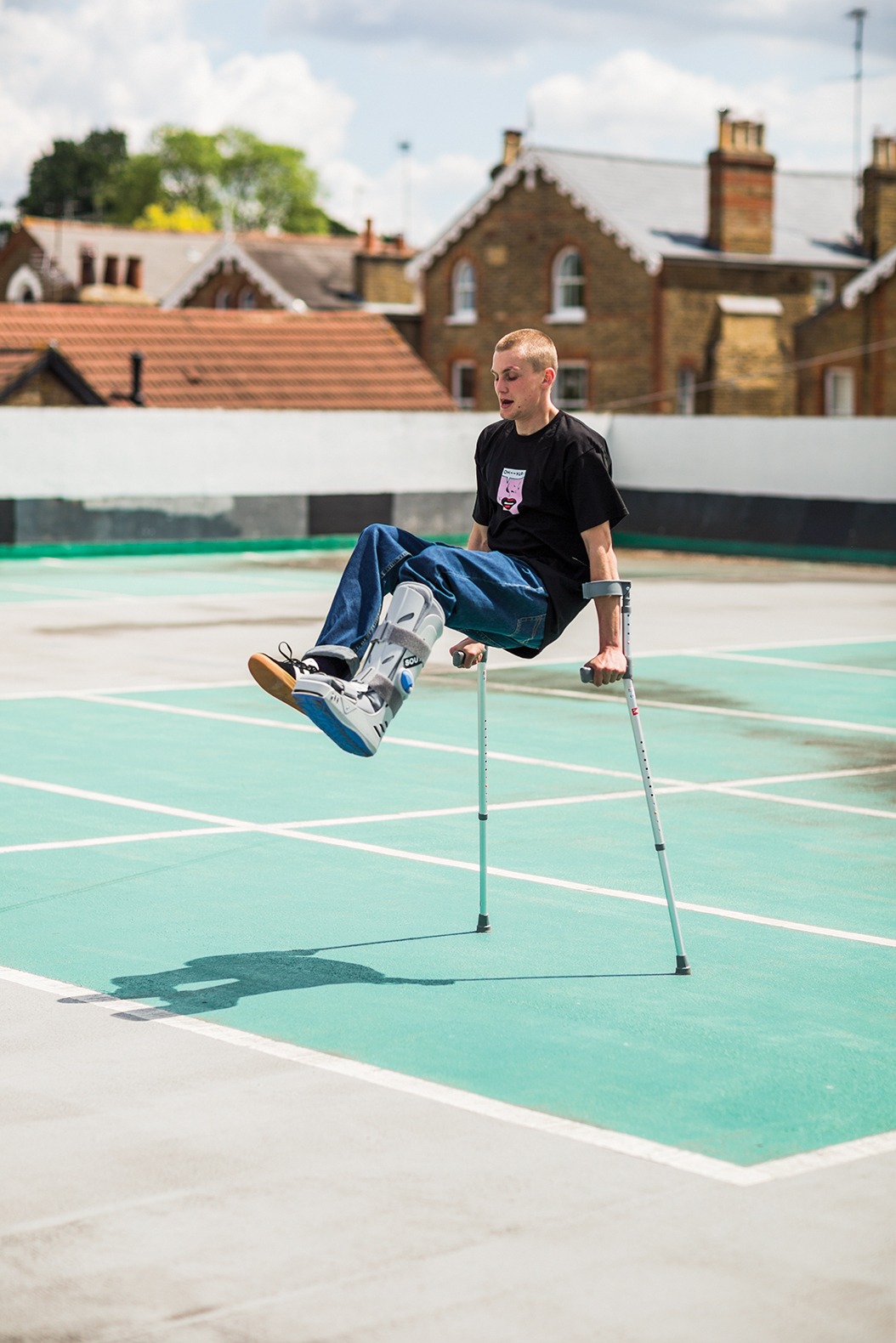 That’s so sick, I was so stoked, it was my first mag photo and that Vague event was so sick, I remember walking in and seeing Nelly and the first thing he said to me was, “Yo Joel why the fuck are you on the cover” I was mad confused (laughs). That same night when the ‘Indecent Exposure’ video ended Korahn got gassed and the table he was sitting on just exploded somehow. He must of took like 4 people down with him. You guys are the best. 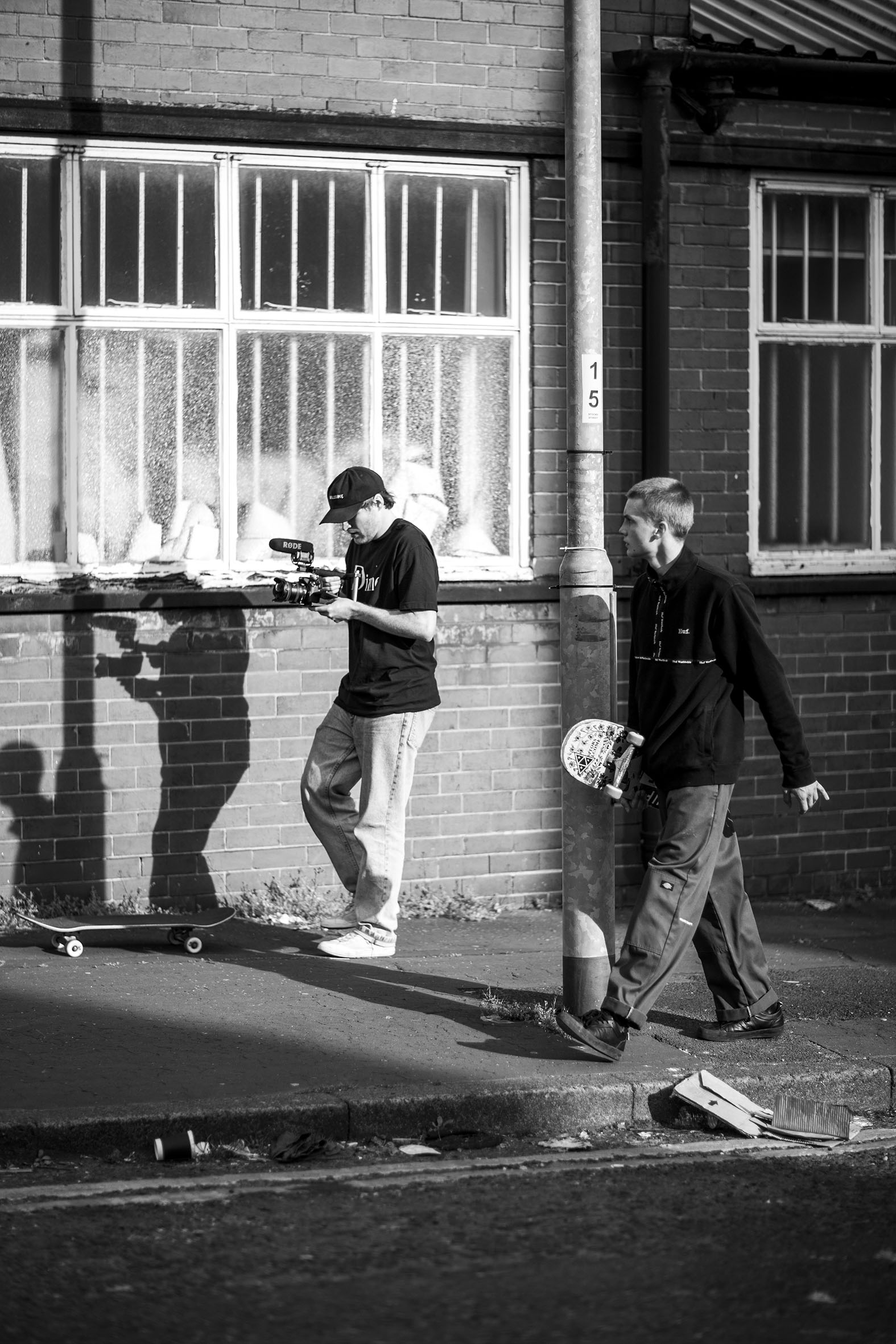 Love you more Joel! What’s in the pipeline my man?!

Filmed and Edited by: Henry Edwards-Woods

Joel Banner and Jeremy Jones share a belter of part along with a ton of other homies who hit up London's Southbank and surrounding areas.