We’re proud to treat your eyes to ‘Turmoil III: Return to Bolzlem’ a full length video chopped and screwed by the illusive, mastermind filmer Peter Piotrkowski. Vague fave and good friend Jazz Leeb was able to locate Peter’s whereabouts and allow us to communicate with him to bring you this much enjoyable video. Peter is a fond traveller and filmed the majority of this video in the US including NYC, Pennslyvania, New Jersey, California, Oklahoma as well as Barcelona and various parts of the UK including Sheffield, Manchester and Stoke-on-Trent (apparently where Peter originally hails from).

Read an interview with Peter Piotrkowski below conducted by the cast and crew of ‘Turmoil III: Return to Bolzlem’ then enjoy the full video. Big up to all involved!

Interview by: The Cast and Crew of Turmoil III: Return to Bolzlem 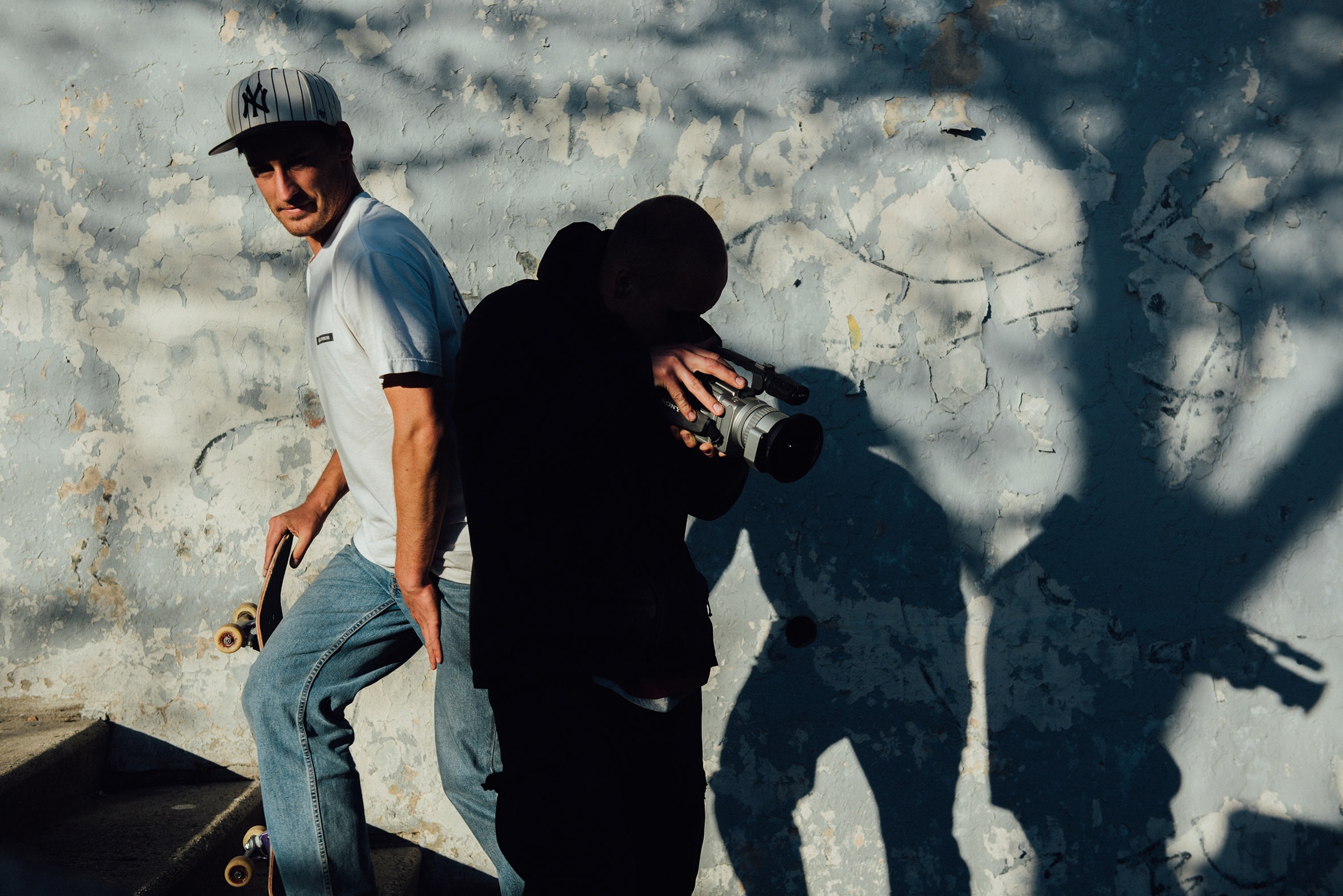 10 Questions for Peter Piotrkowski from the Casst and crew of Turmoil III: Return To Bolzlem

Erik Deringer- How do you feel? 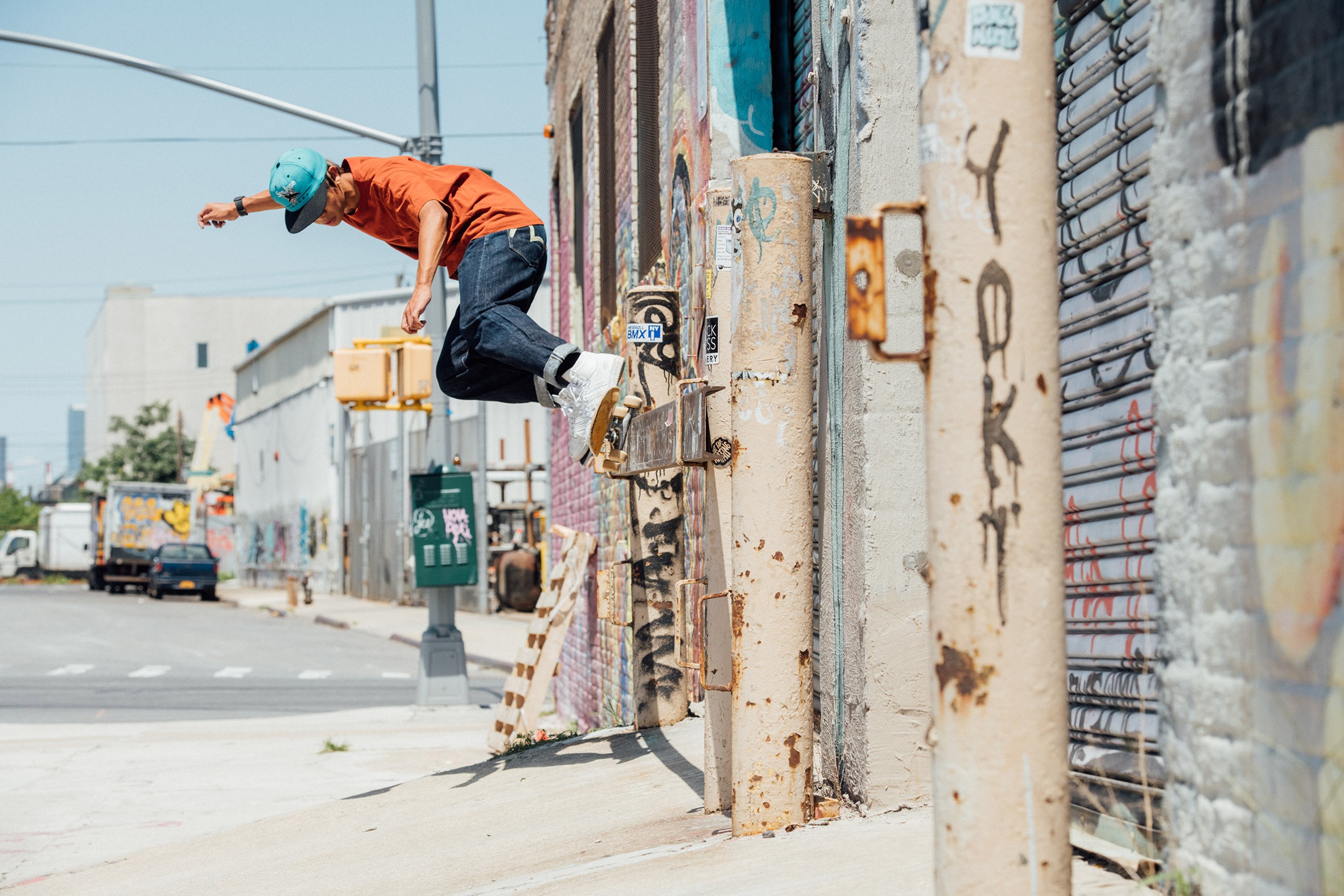 George Etheredge – Can you tell us about the intro to the video and how that idea came about?

I wanted the intro to the video to not have anything skate related in it at all and to just look like a scene from a shit film that doesn’t exist. To do that during the day would have been hard because of the VX having such a distinct look. The idea was that the less you see the better.

Me and Mrs Piotrkowski went and filmed it in a park at nighttime in Queens a few weeks before the premiere. Where I was digging there were shit loads of worms (one of whom made a cameo in Brandon’s part) and we thought ‘maybe there really was a corpse there?’ Then a few days later Mrs Piotrkowski told her mate about it and found out that a mutual friend of theirs actually found a dead body in that same park a couple of years ago. There could be more. 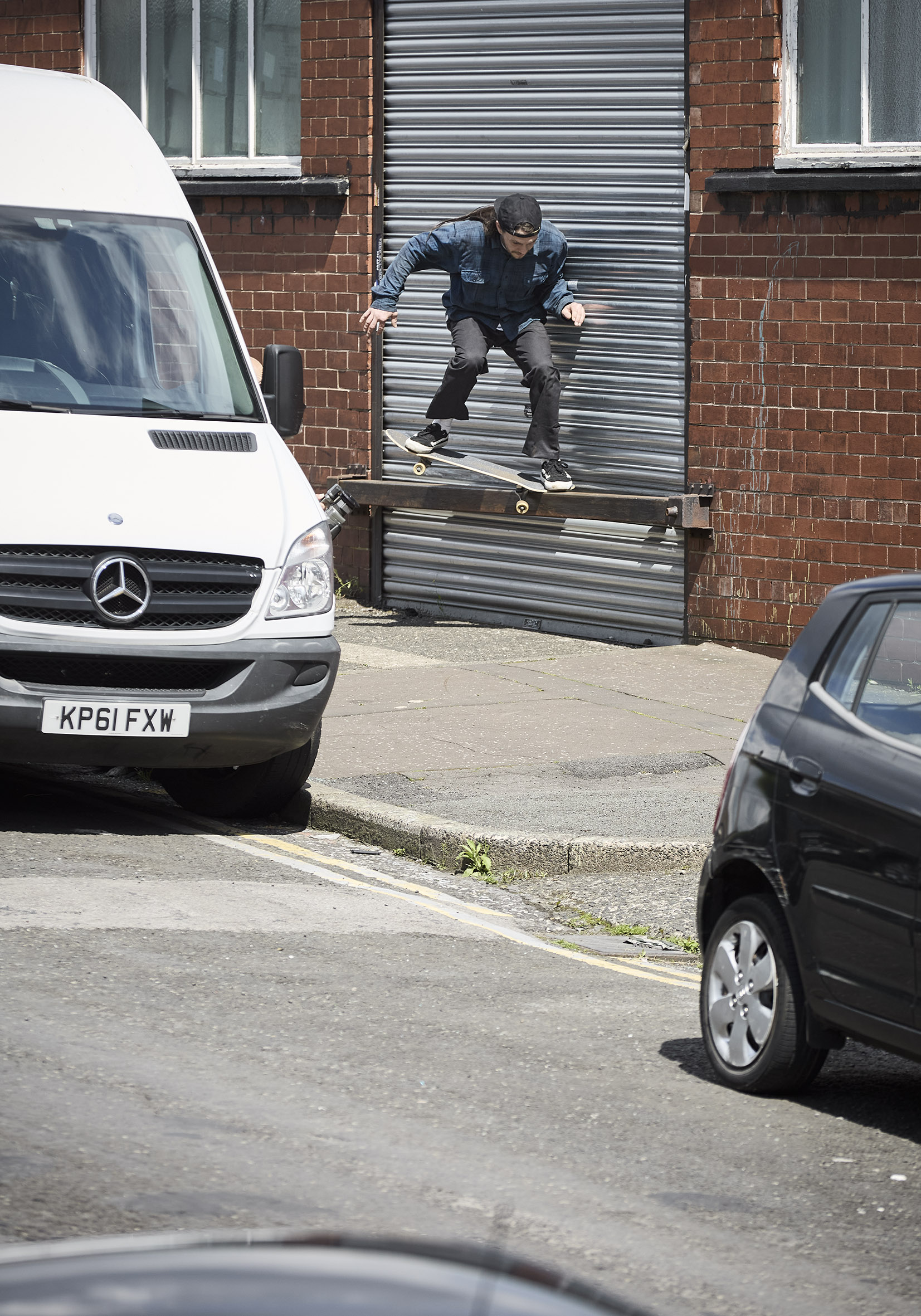 Logan Khidekel – Did you intend to film for the video as long as you did? Was the plan always for it to be a full length?

The plan originally was to film it in eighteen months and have the premiere on Halloween 2019 but it ended up taking over double that. Me and a lot of you lads in the video have full time jobs so all the filming was done on weekends and on skate trips. I definitely wanted it to be a full length from the start but didn’t fully understand how much work it would take for everybody involved. I also think that the quality of skating got better as the time went on, and as each person saw the others pushing themselves they then did the same. Older clips then didn’t get used and I became less attached to them. So I suppose we could have done it in eighteen months but it would have been completely shite in every way. 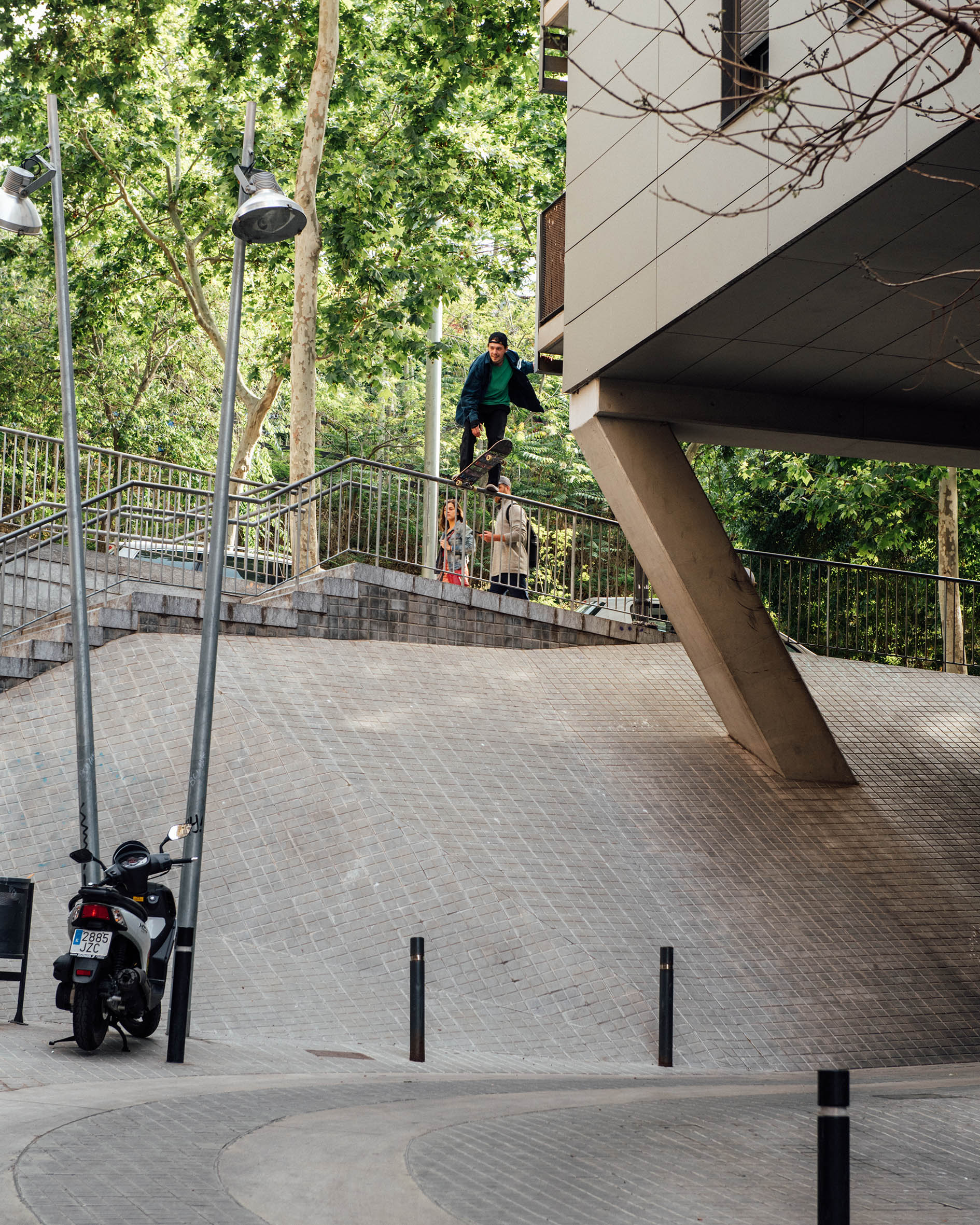 Jazz Leeb – How did you get into filming?

It’s a common story really I think. I got injured five years ago and I had to fill that void. Filming completely took over for me and I became obsessed. With that obsession comes problems though. Like watching every clip I film and hating the way I filmed it. 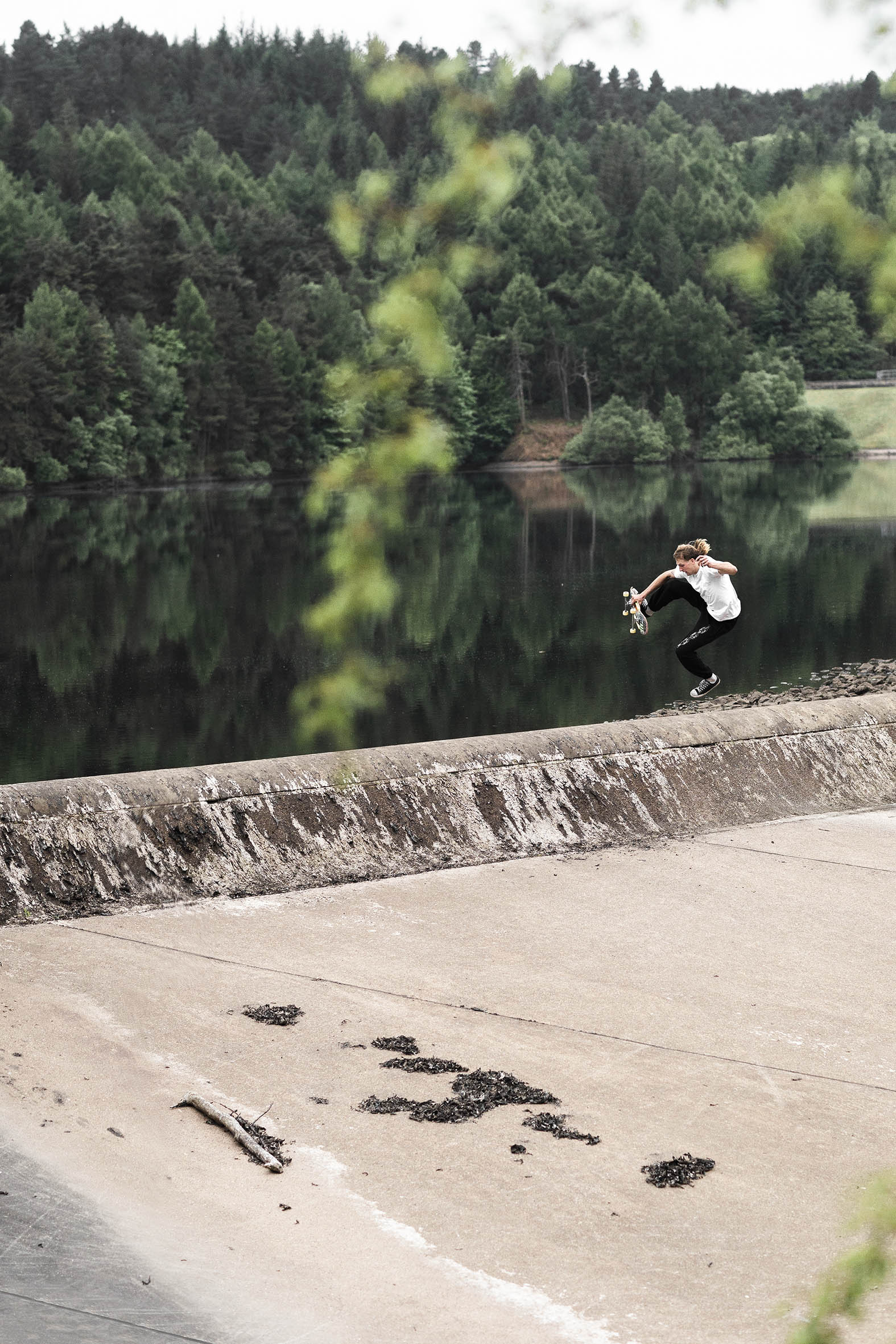 As seen in Dave’s interview in Issue 19

Brandon Nguyen – What’s the greatest thing about not having to film anymore or even ever again?

Haha. I think just not standing about and hearing my mates shouting things like “why am I even alive?!” and “I don’t want to fuckin’ do this anymore!” and feeling responsible for their turmoil on a weekly basis. In all seriousness it feels good to be mates with people again without that goal of filming a trick always being there. I feel like a lot of the crew grew closer because of the video. 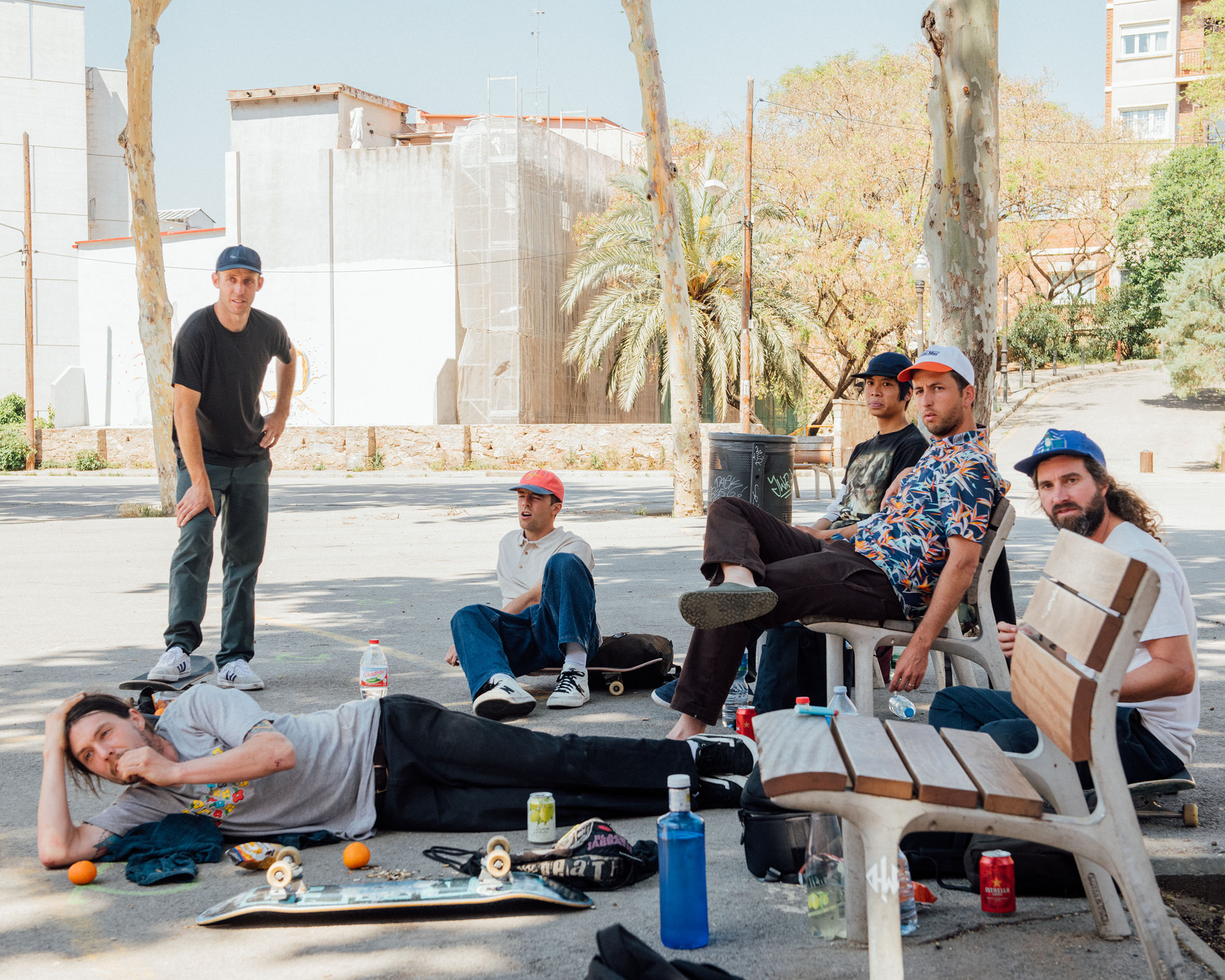 James Fuchs – What were some of your main inspirations when making the video?

Music for me is probably the main thing that inspired the way the video turned out. The song comes first in most cases and the video structure is at the mercy of the soundtrack. What do you see when you hear something? The music that has been most meaningful to me has always been heavy in some way, and I tried to have the colours saturated to pair with that. The VX makes that easy to be fair.

Half of my iPod is filled with film soundtracks, some of which I’ve never even seen the film.

Films themselves have had a massive impact on me when thinking of what I wanted to do with the video. Me and my Mrs. go to the pictures every week and it’s without a doubt the highlight of my week, no matter the week or film. And being in a big city there’s loads of cinemas to choose from, playing old films as well as new. 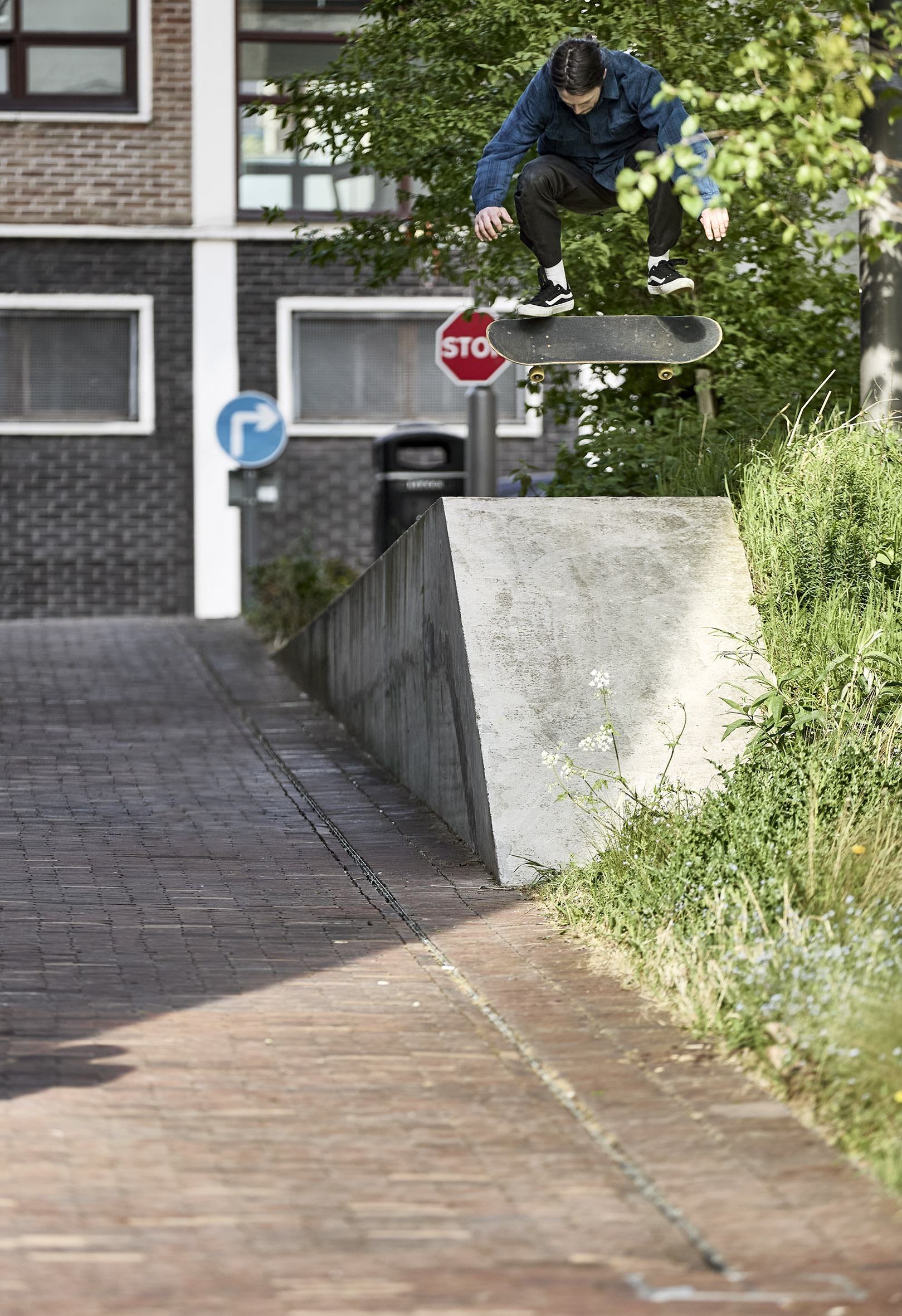 Feral kid (Devin Sweat) – Who would you actually murder from the video if you could?

I would like to, and I think if I planned it out properly, I could kill all 28 people in the video. 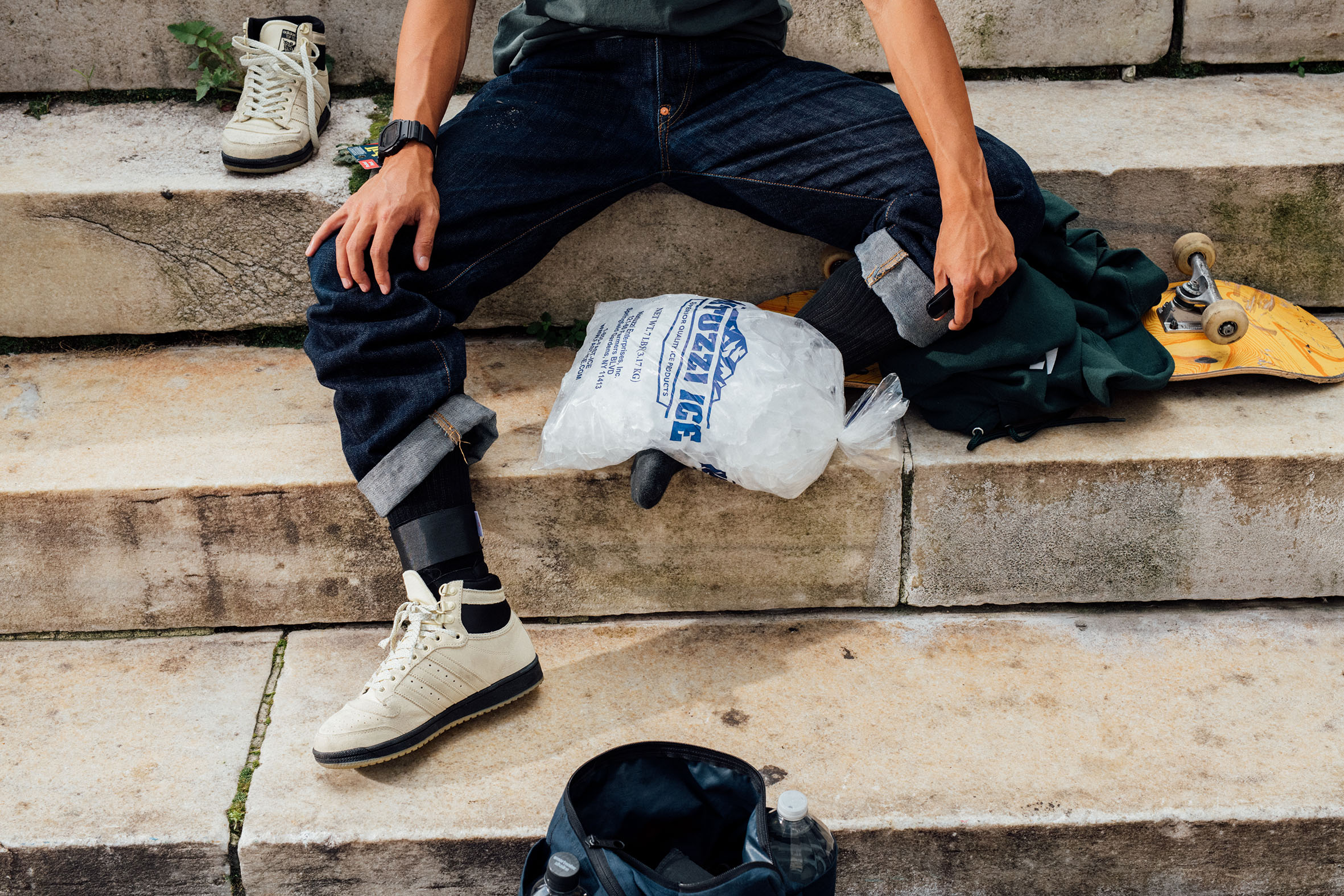 Gordon De Los Santos – So, you have never had a smartphone. What’s it like making a skate video without immediate access to all things skating with worries of ABD’s or ideas being used before the video came out?

With making the video I had to watch all the new skate videos everyday on my computer at home after work to keep up to date with ABD’s and music being used etc. I’m sure some slipped by me but it is what it is. ‘Lady in Red’ was used for James’ part and I was so nervous somebody else would use it. We had the premiere, I gave out DVDs then before it came out online, a New York based video came out and used it. I was gutted. Rung a few of the lads to see if they thought I should change the online version and they said leave it. I was relieved that they thought that because I really didn’t want to have to go through finding a new song at that stage.

With Instagram, don’t even get me fucking started. I can’t watch anything on there because I haven’t got an account so god only knows what tricks have gone down on there. I’m clenching my fists as I’m writing this. 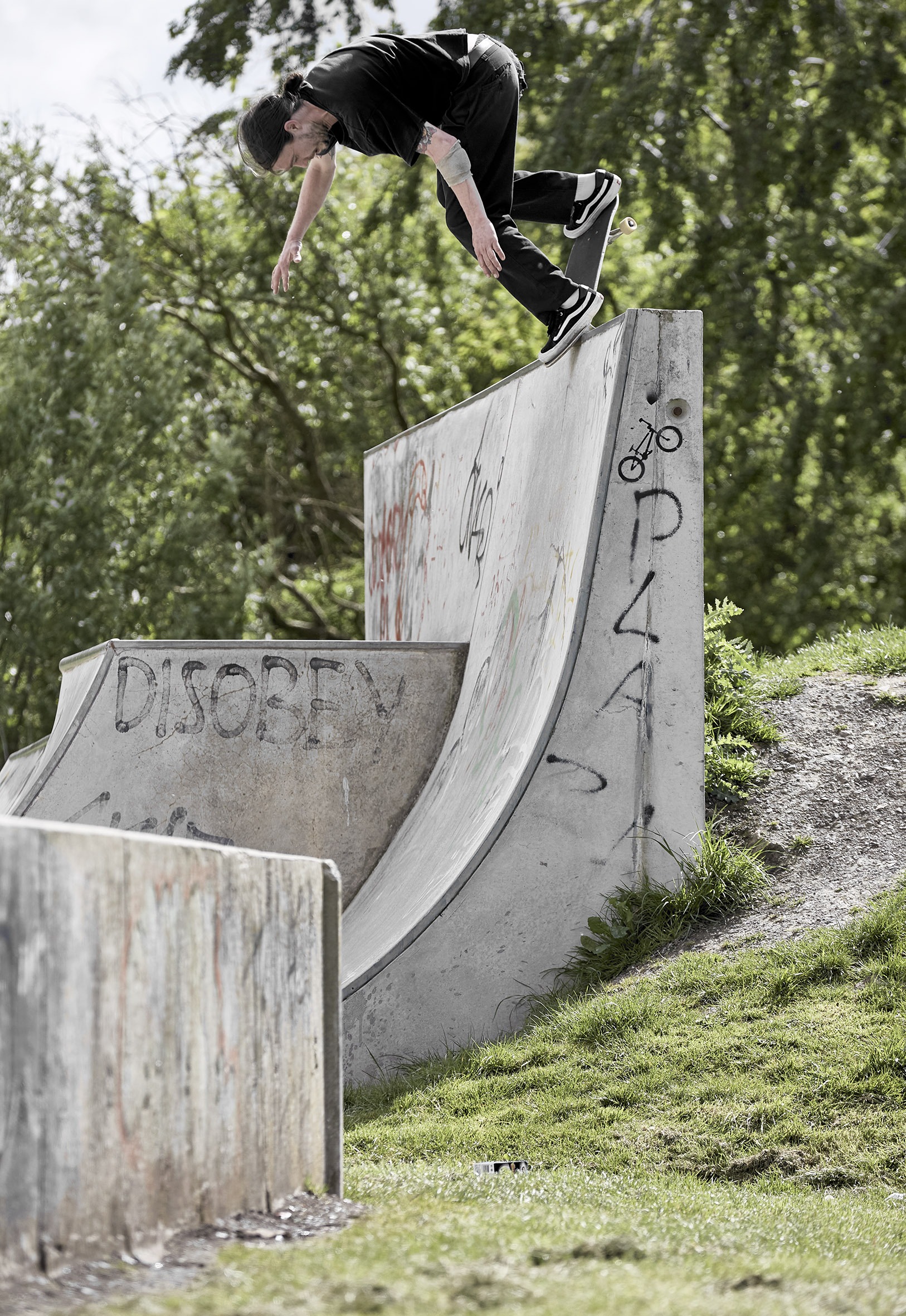 Mark Suciu – What’s the weirdest mission you went on for a trick during the filming of the video?

Weird in a way that left me distraught was when Moggins came out to meet me and Erik in Texas to drive to Oklahoma, then on to other states around there, to get the maximum amount out of the trip. Then on day three or four we went to a fullpipe in Oklahoma, dug out a load of dirt that was sitting in the bottom of it, and after skating it for about five minutes Moggins slipped out and badly dislocated his elbow. We drove to the closest hospital, which was about half an hour away, tiny and understaffed. The nurses pumped him with drugs and tried to put his arm back in place and couldn’t do it. They then kept leaving him for ages and he would say to me (mumbling like Arto from Sorry), “What’s happening? It’s killing me”, so I would go tell the nurses and they would come back in and start ragging on his arm again after pumping him with more drugs.

Eventually after four failed attempts they got an ambulance to drive him to a bigger hospital where they had the right medicine and experience to sort it. I said that we would drive him there but they told me they couldn’t let us because at that point they had given him so many drugs he could swallow his tongue and stop breathing. Obviously I was like, “yeah fuck that you drive him”.

We followed the ambulance in the car, got into a room there, and within a few minutes this unit of a bloke came in and I thought, he’ll sort it. And he did. From the time he slammed to him getting fixed it was about nine hours. Moggins can’t remember anything after getting to the first place because he was so fucked on the painkillers. I couldn’t stop thinking about it for ages after.

The footage of the slam lives on a tape now under my wardrobe. One day I’ll either have to smash it or import it. I’ll probably smash it. 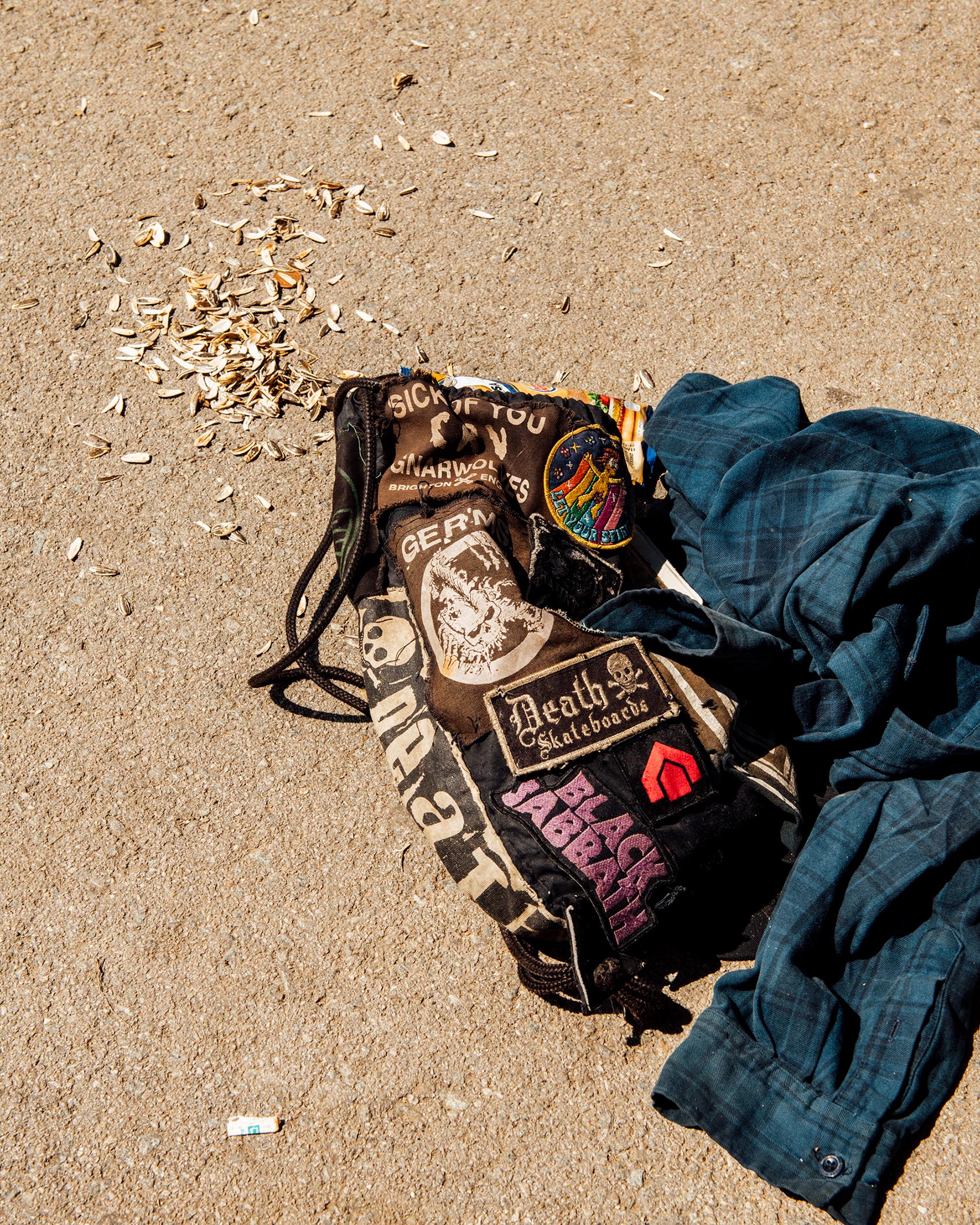 Moggins – Most used quote from ‘Sorry?’

“Pathetic, small, feeble amount of blood on the scene. I hate cameras”. 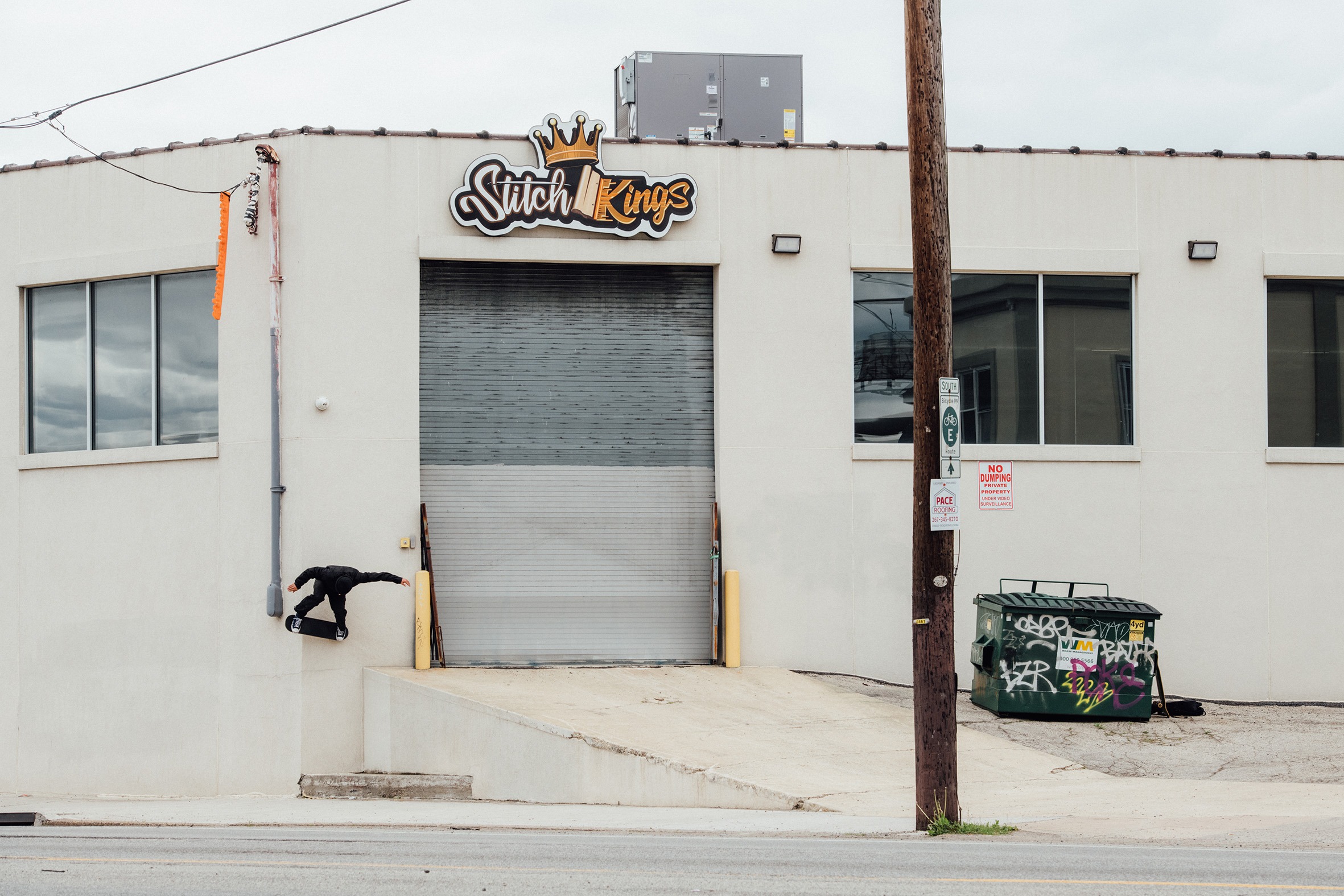 Jazz Leeb rips those NYC streets for his 'Turmoil III: Return to Bolzlem' part topped off with a Mark Suciu cameo. Filmed by the very illusive VX wielder Peter Piotrkowski.

The main man behind Stoops Mag Eby Ghafarian drops a part with us to accompany his interview in Issue 21 of Vague.