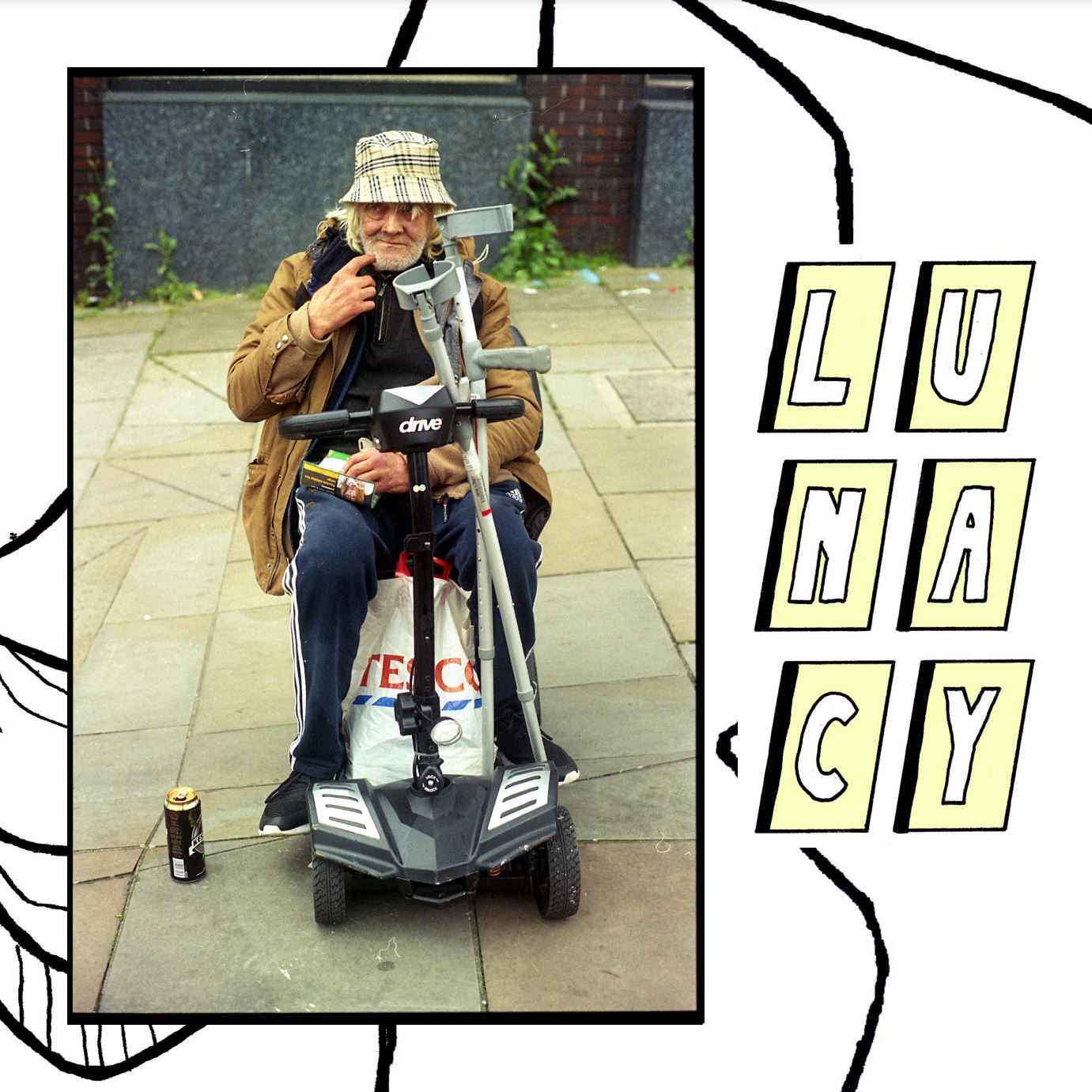 Lunacy, the first of what will hopefully become a series of photo essays by Ste Fletcher, begins with a mission statement;

“Lunacy is by no means a slight on the people included in this book. Far from it. Lunacy highlights the madness of everyday conversation, exposing the surrealism of the so called normal, and the shame that ought to echo throughout the land for keeping these voices unheard.”

It is an introduction to some of the spaces those oft unheard voices inhabit, visually via the photography of Ste and the illustration of Mark Javin, orally through the words of the zine’s subjects themselves. It echoes Albert Camus’ statement on Jean Paul Sartre’s Nausea, that “The realization that life is absurd cannot be an end, but only a beginning.” This first issue focuses on Manchester and its surroundings, one of the UK’s most densely populated areas and one which has seen seismic socio-economic shifts and schisms over the last few decades. Shot during lockdown in late 2020, it opens up that world of public interaction slowly being lost to us in the midst of technological upheaval, home working, virtual socialisation and the deification of a live-to-work ethic. With plans to possibly extend the series to different areas of the country, it will be intriguing to see how the dynamic plays out in different areas, how it is affected by different cultural kinks and quirks.

Ste describes his photography as happening “… in a very natural way… I always have my camera with me and this is where some of these opportunities and conversations have arisen, which I think is obvious upon viewing the book.”

It is not just his camera work that stands out, but his dedication to the dying art of speaking to people whom he meets on his travels and genuinely listening to their responses; something evidenced in some of the dialogues transcribed here. It is the embodiment of Guy Debord’s Theory of the Dérive, a “technique of rapid passage through varied ambiences,” which sees a walker, “drawn by the attractions of the terrain and the encounters they find there.” Influenced by acclaimed photojournalist Nick Danziger’s Danziger’s Britain: A Journey to the Edge (alongside the films of Ken Loach and Mike Leigh), Ste was inspired by “the idea to buy a dictaphone and just go out and record snippets of dialogue with a photograph alongside, with the aim in mind to be as weird as I could get.”

The encounters which followed, and which make up this project, include a man belting out ‘Amarillo’, a woman who claims she once dated Ken Dodd, an army veteran, an ex-abattoir worker, dog lovers, tobacco lovers, drinkers, workers and lurkers. The interactions didn’t always result in zine fodder – “I met a guy called Barry Morton who was part of the Strangeways riots.

It was mental what story he had about being inside, unfortunately the photos were screwed so he didn’t make the cut” – but the ones that did tell of a truly immersive approach to his work.

“My method of working was to just wander the streets with some beers, eventually you’d find someone who fits the bill. Some days were unsuccessful, I got myself in a few dodgy situations, but you learn from being stupid and pushing things too far.” 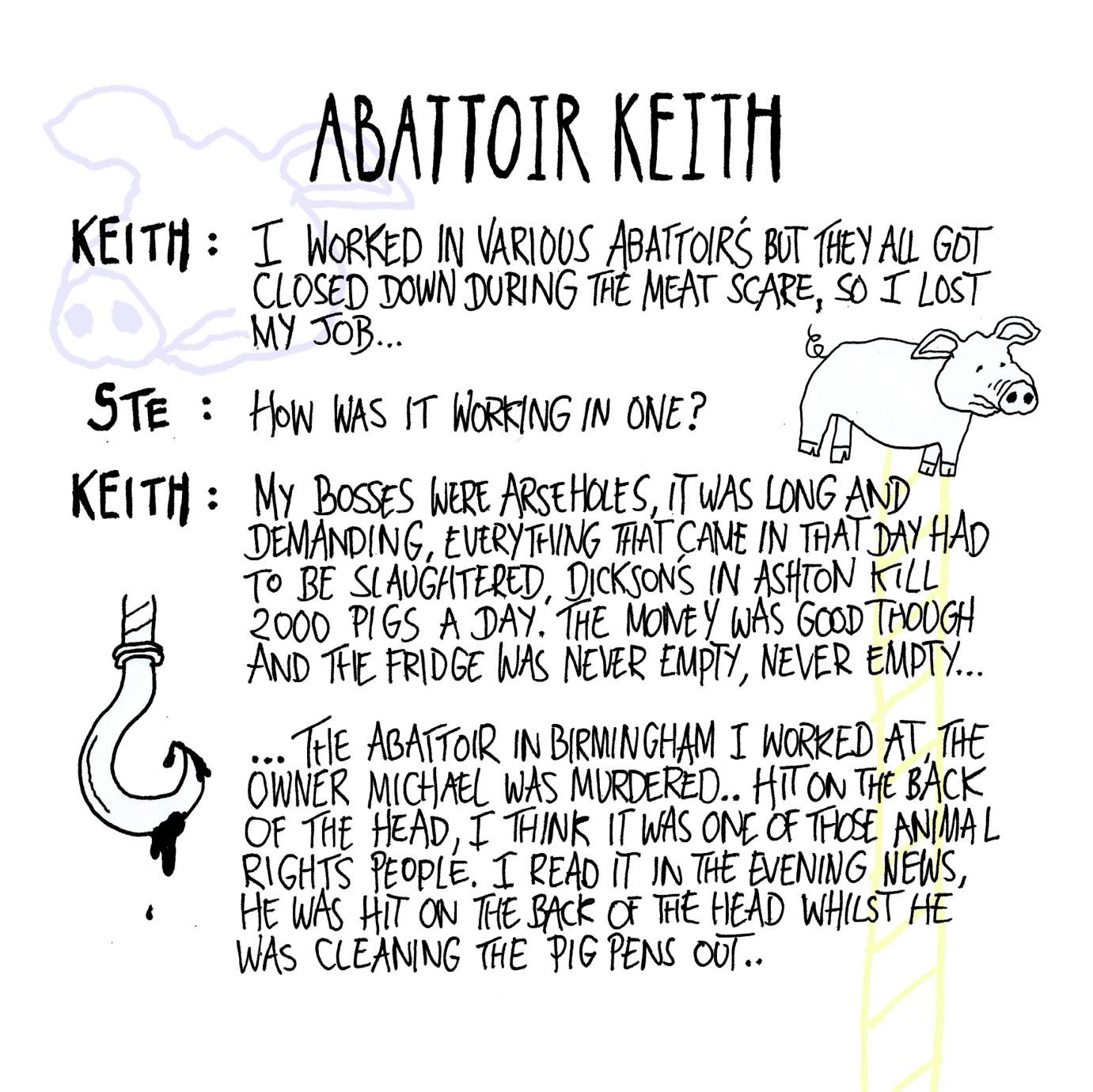 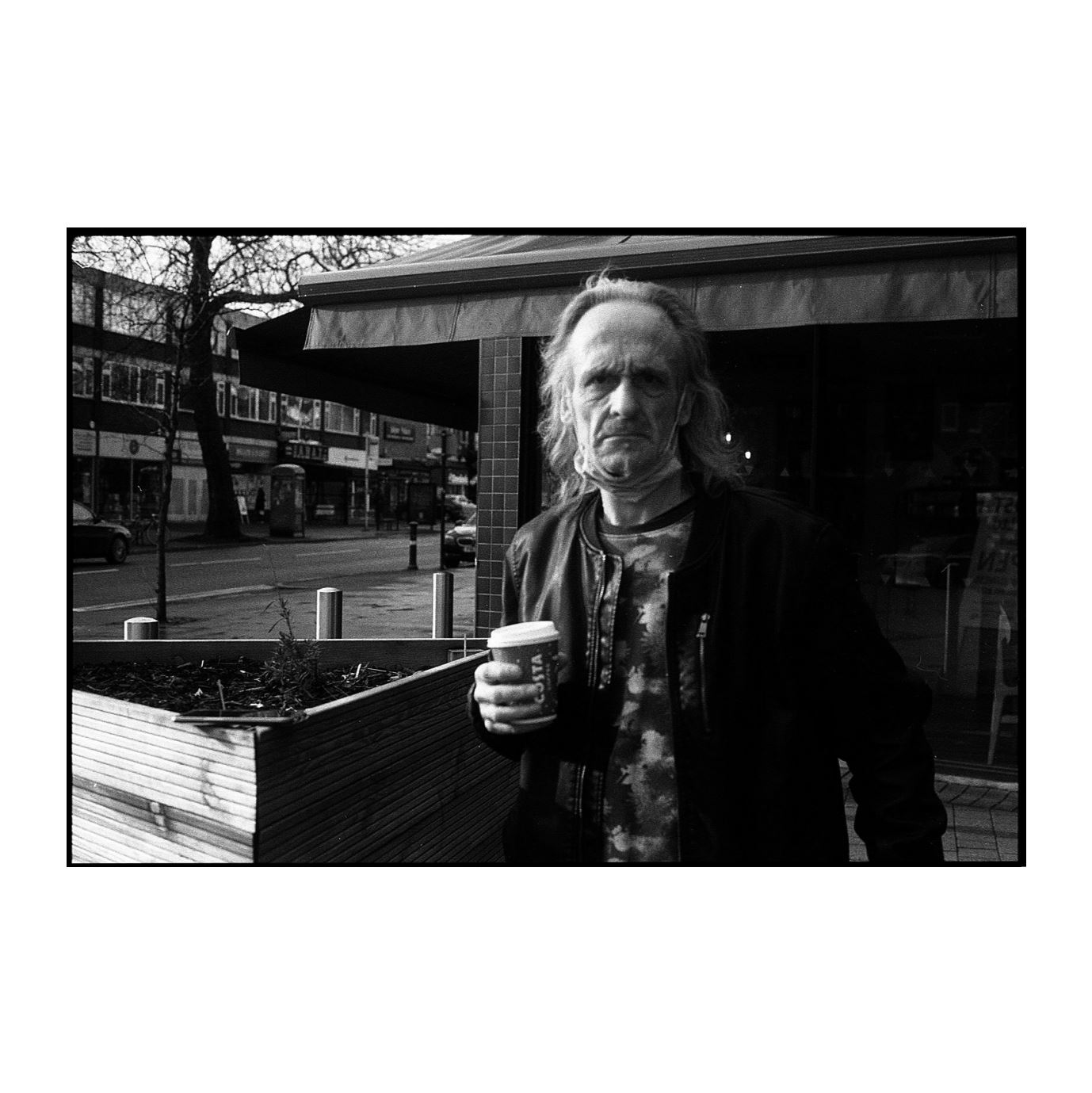 With the collaboration of friends Owen Godbert (photographer) and Dan Caldwell (who wrote the introduction and helped with transcription), the final focus of Lunacy is Ste himself – in true Gonzo style, the final dismantling of any barrier between photographer and subject. Javin’s design and artwork are the perfect compliment to the zine’s subject matter, and the feeling upon finishing the zine is akin to leaving the pub at around 11pm with a good buzz and reflecting on the pleasure of hanging out with not just your friends, but with the weathered barflies who have been there since opening time.

Ste and Owen have made a name for themselves over the last few years with Through the Eyes of Ruby, a collection of intimately personal photos of bands and musicians, and Ste highlights how much Owen’s photography style has influenced him whilst noting the difference in approaches to the two projects;

“Just looking at Owens work helped me the most, because when we started the Through the

Eyes project I was fucking shit. He helped me progress and carry the project while I was learning.

“They are both very different things, obviously shooting live music there is no anxiety involved. There is lots of anxiety to overcome when approaching people in the street, especially when you want to record them too. I feel me and Owen get better at this style of photography from doing our Life In Pandemic page. It does take guts, but that’s where the lagers help.”

Both projects, however, have their similarities; with the openness of those involved testament to his approach to the subject matter. The hardest thing about writing this review was finding words to match the humour, empathy and ebullience with which Ste and Mark approach their subject, and I’m pretty sure I’ve failed entirely at this – so get the fuck away from my pixelated rambling and your screen altogether, get hold of this brilliant piece of work in print via thebookoflunacy@gmail.com, then go out and have a conversation not facilitated by Mark Zuckerberg.