Jono Coote sat down with Globe’s ‘President of Global Product’: Matt Wong and talked about their sustainable ‘Living Low Velocity’ range. Have a read below and check out some lush photography by Alex Papke of the likes of Sammy Montano, Mark Appleyard, Aaron Kim and more. Once you’ve had a gander go check out Globe’s Living Low Velocity collection here.

From their home in Melbourne, Globe Footwear are well placed to appreciate the rapidly changing planet on which we live. ‘The Anthropocene’ is the (currently debated) scientific term which has been given to the current epoch of geological time, one in which our planet’s ecosystems are being noticeably affected by human activities. Since the Industrial Revolution of the 1800s, and more noticeably since the Great Acceleration has seen a dramatic rise in world population, urbanization and climate change, it has become clear that our species’ technological advancements are moving way faster than our ability to utilise them harmoniously with the Earth’s natural patterns. People are spreading over the globe faster than we are creating ways to accommodate this rise in population; in the words of No Trend, “Too many fucking humans, you breed like rats”. Or, perhaps even more stark, is the comparison used by biologist E.O. Wilson and quoted in the National Geographic’s Age of Man article; “The pattern of human population growth in the twentieth century was more bacterial than primate.”

With human agency causing changes in animal life, in the weather, in the very earth itself, many are starting to take notice and demand some kind of change on both a personal and a societal level. Various grass roots movements are gaining more and more momentum, forcing the debate into the public sphere. This is starting to filter through now into the once resistant world of business, where the ease and quick profits associated with the disposable nature of modern capitalism are being replaced in some areas with research into sustainable materials, more ecologically sound production methods and carbon offsetting, amongst other things. Australia’s long running footwear manufacturer have their home pretty much underneath the man made hole in the Ozone Layer and, as such, have been in a better place than many to witness the negative impact humanity has had on its ecosystem. In fact, since sending off these interview questions to discuss their latest range, the country has seen floods, plagues of mice and plagues of spiders – all of this in the aftermath of the terrible fires which devastated wide swathes of the countryside the previous summer. The reason for this interview is that the company has decided that, rather than carry on with the same business model as ever, they will be attempting to refocus their efforts into a more ecologically sustainable mode of business. With the ‘Living Low Velocity’ range offering a potential avenue for more companies to go down, I spoke with Globe’s Matt Wong to find out more about their new direction. 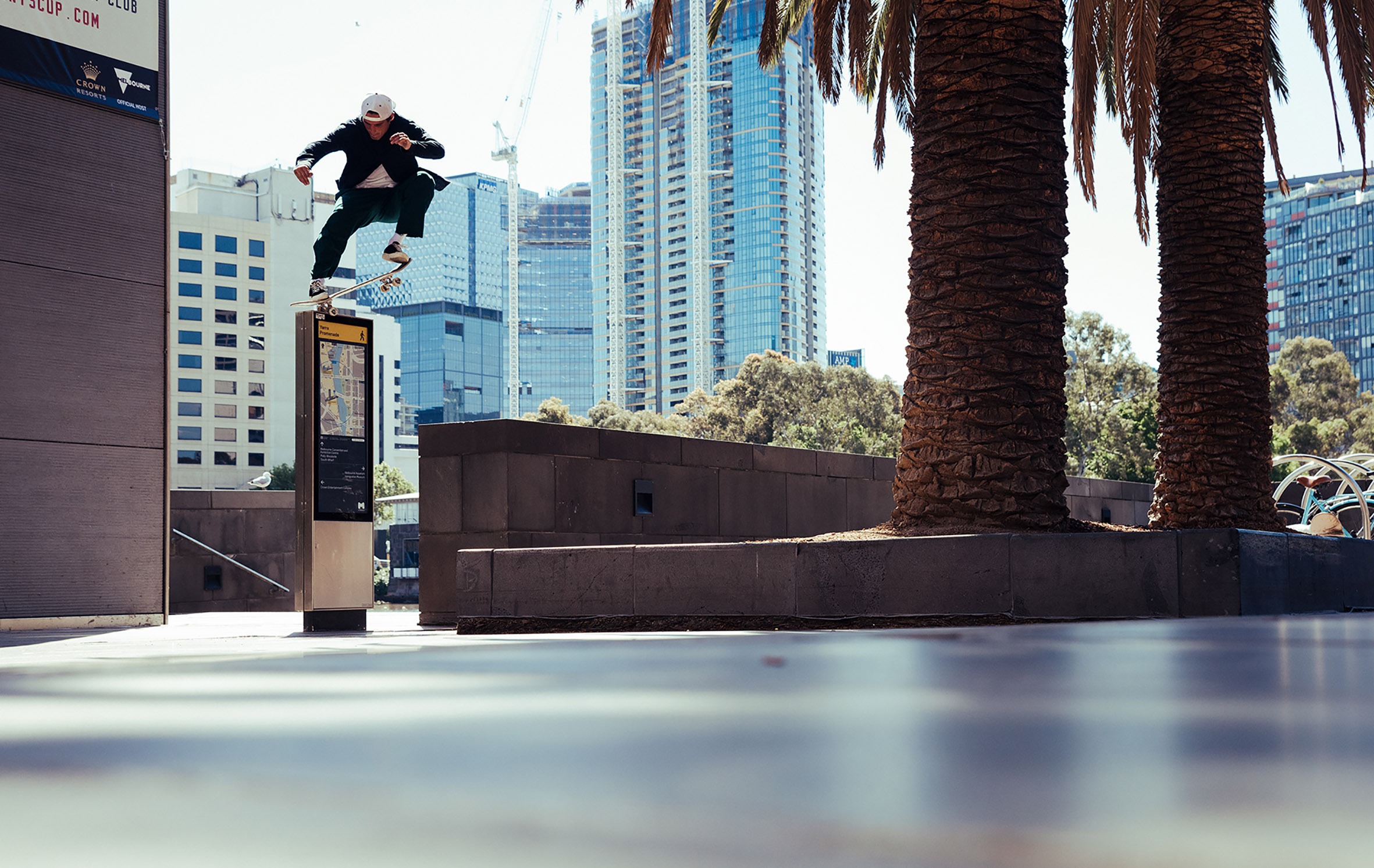 This interview comes at a point where Globe is refocusing on sustainability, with the tagline ‘Living Low Velocity’ – can you elaborate on that a little bit and give us an insight into what changes have been made for this range?

We’ve had an internal debate at Globe for a very long time about what we were doing as a brand, and more specifically about the products we were putting into the market.  As a brand that celebrates boardsports, environmental issues were always on our mind, but they weren’t necessarily the driving force behind what we were doing.  We felt like we were sort of trapped in a fast fashion clothing program – churning out new ranges every season, and trying to keep up with our bigger competitors (who were often also retailers). A lot of our discussion centred around all the travel, samples, shipping, and potential landfill that this clothing model generated. Then, back in 2018, the Hill brothers (our founders) basically gave us the go ahead to completely overhaul our clothing program. This included giving up a decent existing clothing business in the short term, to build up a new and more sustainable business from scratch in the long term.

So our ‘Low Velocity’ clothing was born, which meant we were getting off the ‘fast fashion’ treadmill. We now have a global trans-seasonal range of premium evergreen staples. Our Low Velocity program tries to address the issue of sustainability from a few angles. Firstly we use sustainable fibres across the entire range, for example organic cotton and Repreve recycled polyester.

In addition to that, we aren’t completely reinventing our ranges every season – we offer premium staple styles that remain in the range season after season and that people will hopefully gravitate to as their “must have” style in various colors. This hopefully means retailers don’t have to reduce prices at the end of any season, and we’re not chasing the next fashion fad, which we know usually has a limited lifespan.

Part of sustainability is in the longevity of a garment – whether that be in styling, or in durability – which relates to its quality and ensuring that it lasts so it doesn’t end up in landfill after a couple of seasons. Prior to our Low Velocity launch we had a long and intensive wear test program, where a large sample of crew wear tested a small production run of our first range for months. They gave us feedback on things like wear, function and comfort, then we updated our design and ran another small production run with improvements, then went through the wear test process again. This sort of process is almost impossible to do in traditional seasonal range development, because there’s not enough time to do such extensive testing.

We know we’re nowhere near perfect, but our goal is to continually make sustainability improvements as much as we can. One other cool thing we’re doing is that for our first global range, over 97% of the collection will come in FSC certified paper garment bags, rather than the industry norm of single use plastic polybags (which mostly ends up in landfill). 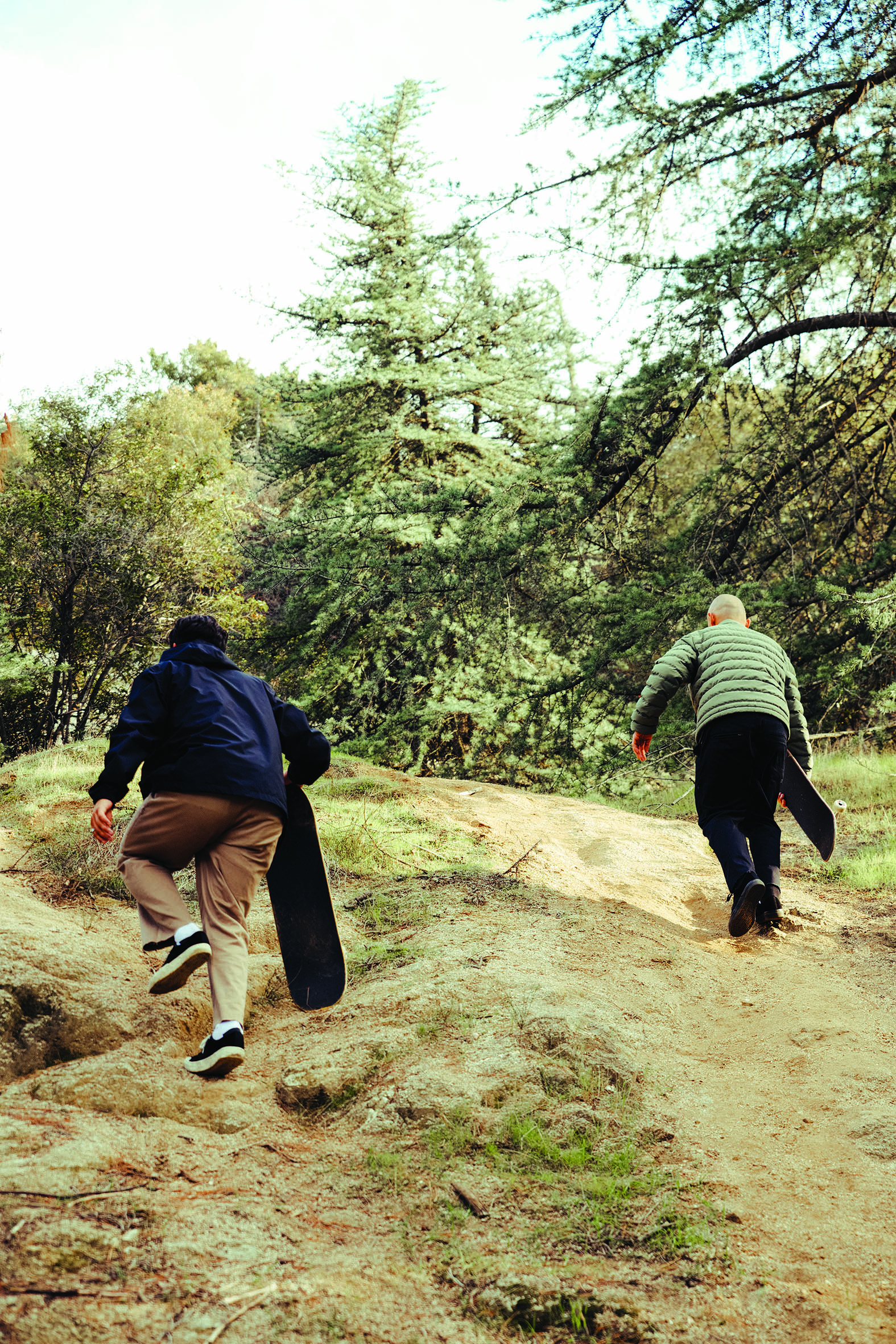 There is a dichotomy and perhaps a contradiction in a skateboard brand trying to promote ethical and sustainable practices in a pastime reliant on the constant destruction and replacement of its central tools. How do you think skateboarding as a whole can reduce its environmental footprint?

I think it’s a top down process that needs everyone doing what they can on an ongoing basis to reduce their footprint. If everyone waits to create the perfect plan, we won’t make any progress because things change so quickly. So whether it’s about trying to use more environmentally friendly skateboard components and processes, working on making offices and factories as environmentally friendly as possible, considering the packaging we use; the catalogues we print, the list goes on. 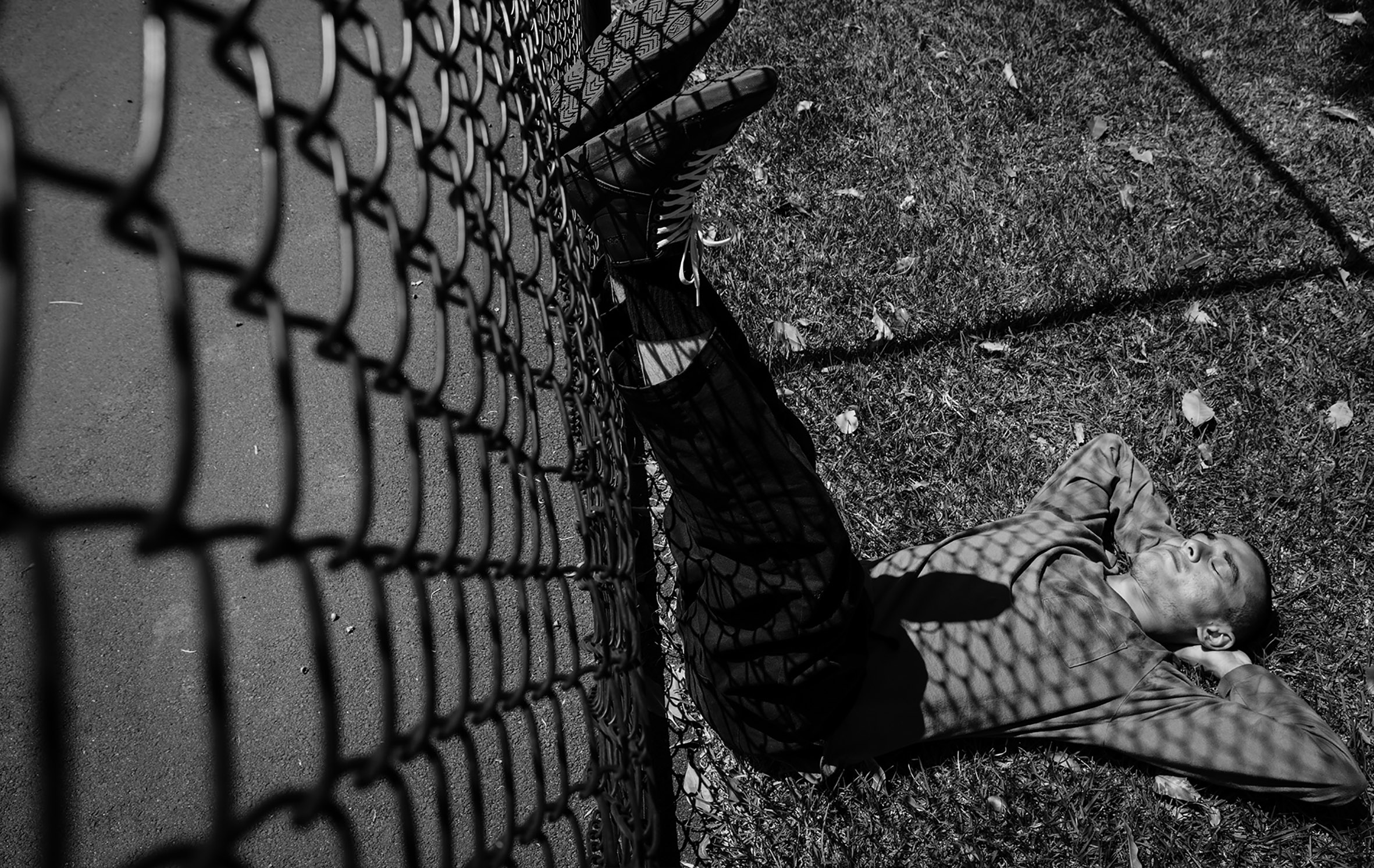 In the last few years there seems to have been a marked increase in people upcycling old boards – from Eloise Dorr’s art exhibitions painted entirely on broken boards, to people like Dan Drehobl, Dave Morgan and Ben Footitt using old boards to create tools and utensils. Is there a way in which this resourcefulness could be applied to the shoe industry?

We love all the board upcycling stuff and the creativity that comes from that! And yes, this type of thinking is already starting to be applied to shoes. Dealing with the massive amount of worn out shoes at the end of their life is a big issue. In Australia, we’ve been part of a pilot program put together by the Australian Sporting Goods Association called the Save Our Soles Footwear Recycling Initiative. Shoes get collected in store and then are taken to a tyre-crumbing processing plant that turns them into raw materials for rubber matting and playground surfaces. We’re really proud that our involvement in that program has now led to Federal Government funding that will take the scheme nationally around Australia. We’re also starting to work on using better materials from the start with our shoes, challenging our designers and production staff to incorporate more sustainable elements in the construction of our footwear. 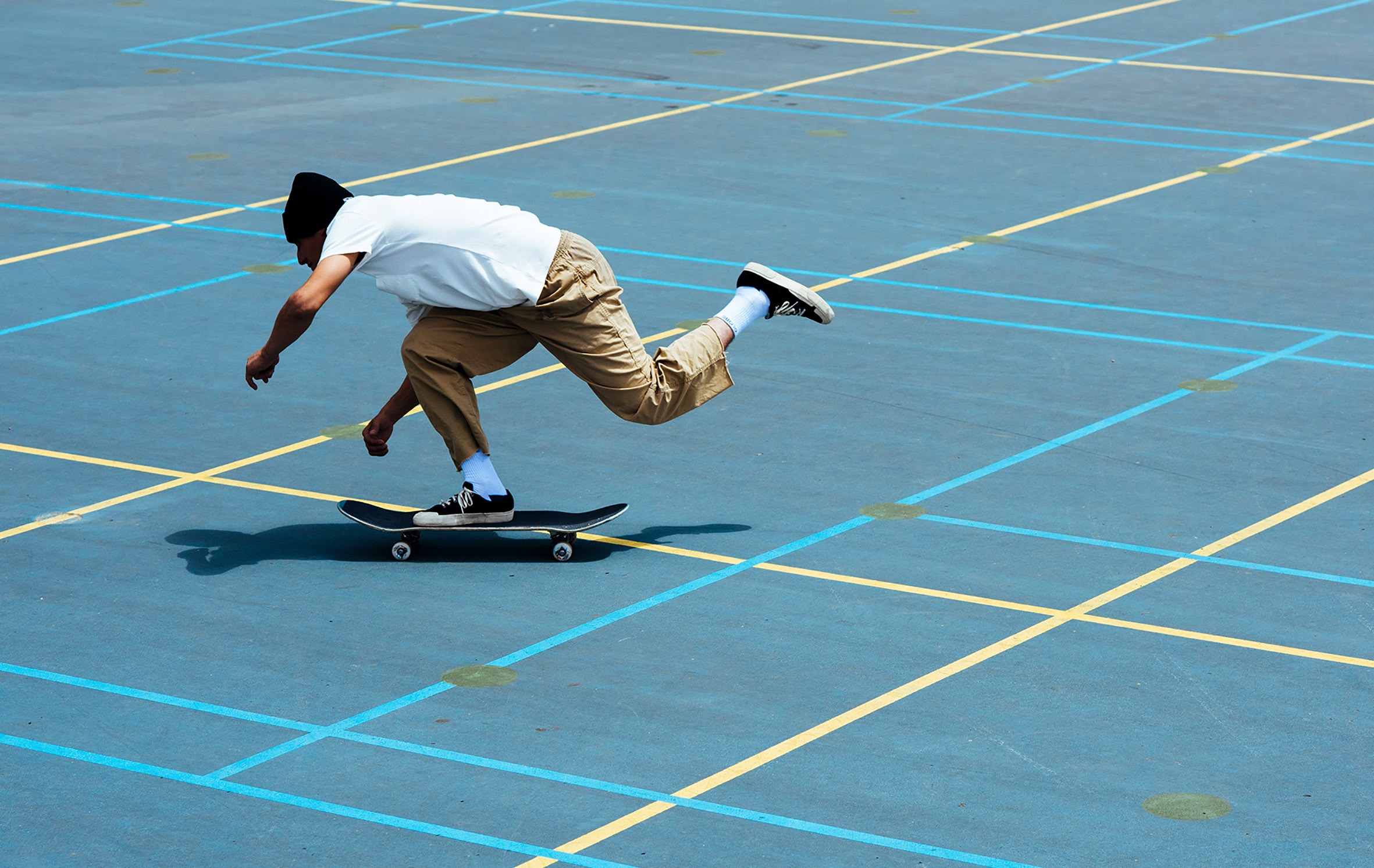 The members of your skate team chosen to rep this drop are Mark Appleyard, Sammy Montano, Aaron Kim and Fries Taillieu. Any idea why they were chosen specifically from the broader group of skaters Globe hooks up?

Part of the choice is strategic, for example Mark Appleyard is a legend who fits the Low Velocity positioning. Sometimes it’s more organic, where we’ve had relationships with certain guys for a long time and they see what we’re working on and express interest in wanting to get on board. We’re stoked that most of the crew we work with have a long term view on their projects with us. 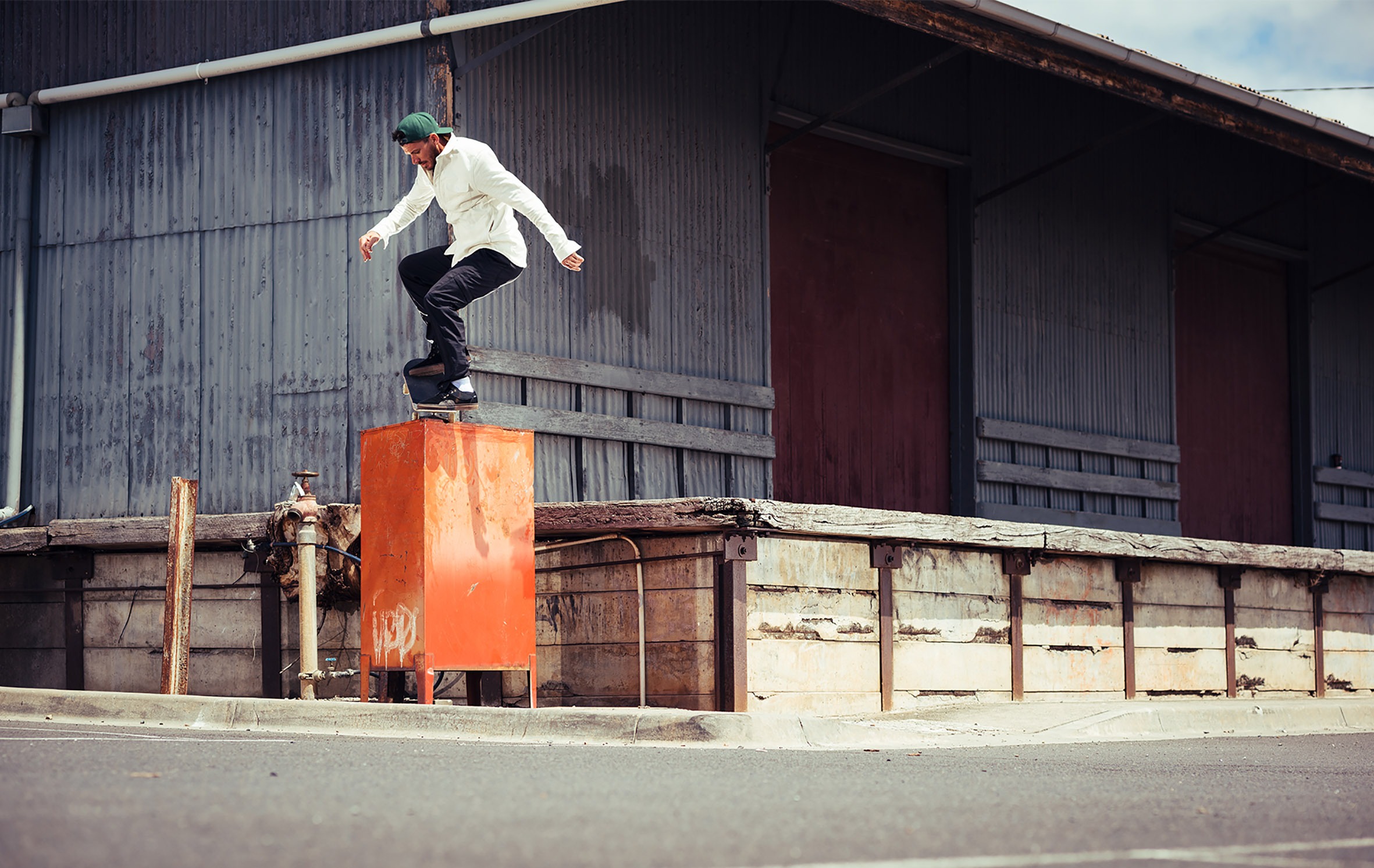 I noticed that in the lookbook was a Tasmania collection, one of the most unspoilt places I’ve ever visited. The beaches were incredibly free of rubbish and plastics, something which took me a moment to clock after the very different beaches of Sydney, Melbourne or indeed most other coastlines I have been to. Was the ‘Dark Hollow’ collection a reflection of this? Do you think that, with a concerted effort, humanity could restore more of the earth’s coastlines to this pristine state, or are we at the point of being more engaged in damage control?

Yes, the Dark Hollow capsule is a reflection of this. It’s also the home to one of our surfers, Dion Agius, with whom we worked on this collection and also is centred around a new film we’re releasing in May (funnily enough called ‘Dark Hollow’). Some of the proceeds from this collection will be donated to the Bob Brown Foundation which aims to help campaigns and activists protecting ecosystems, species and wild and scenic heritage. Globe and Dion will be donating a minimum of 15,000 AUD. The Foundation is a non-profit fund which promotes the protection and enhancement of the wild beauty in Tasmania as well as the ecological integrity of Australia. 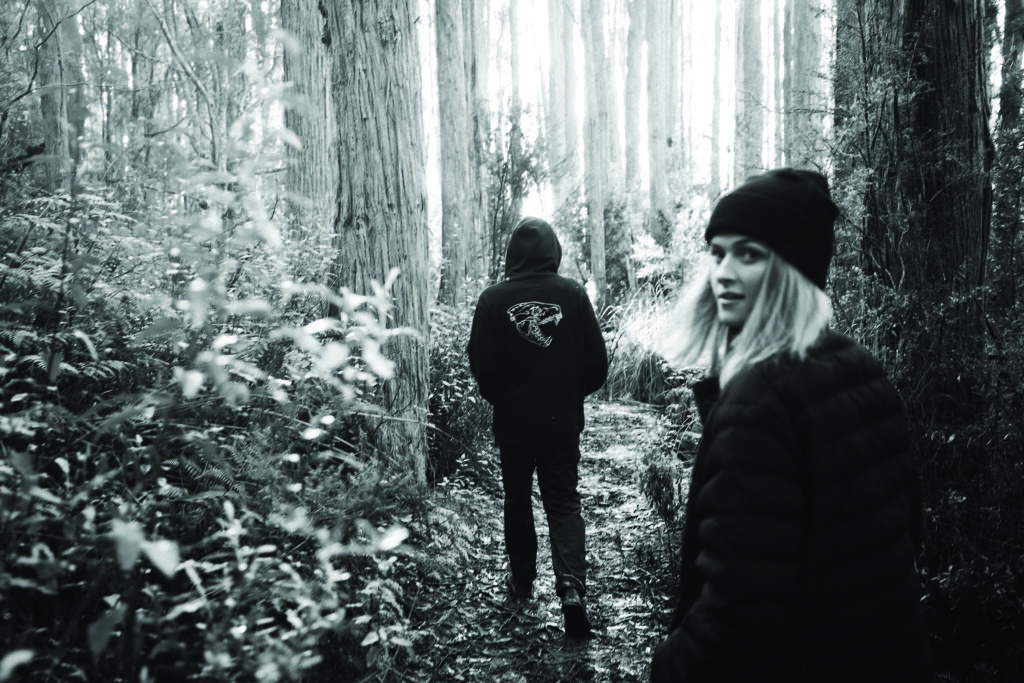 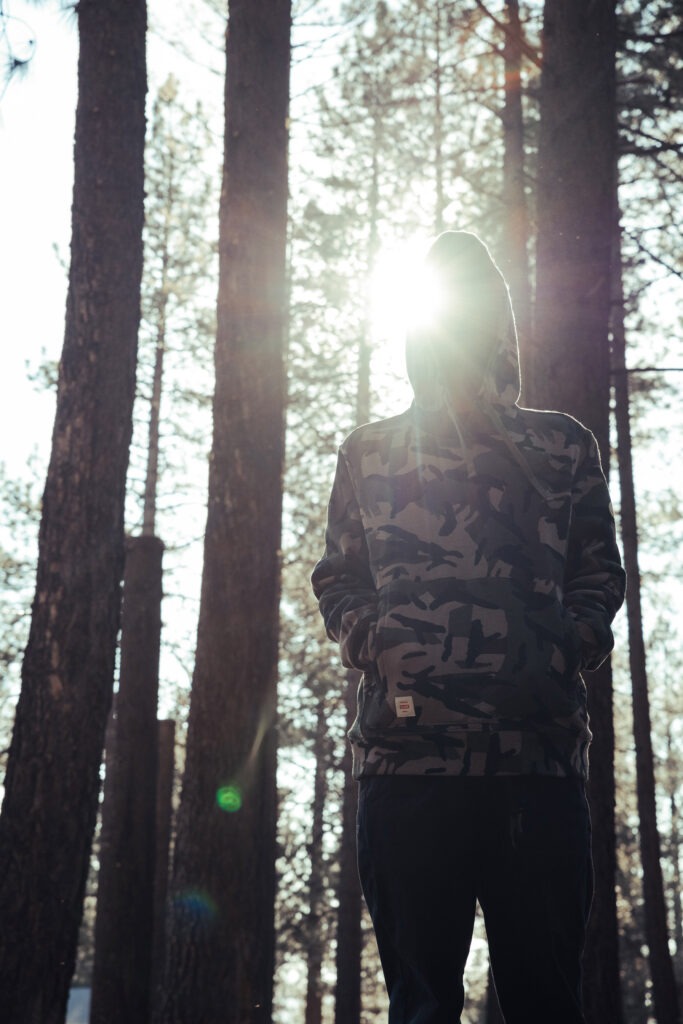 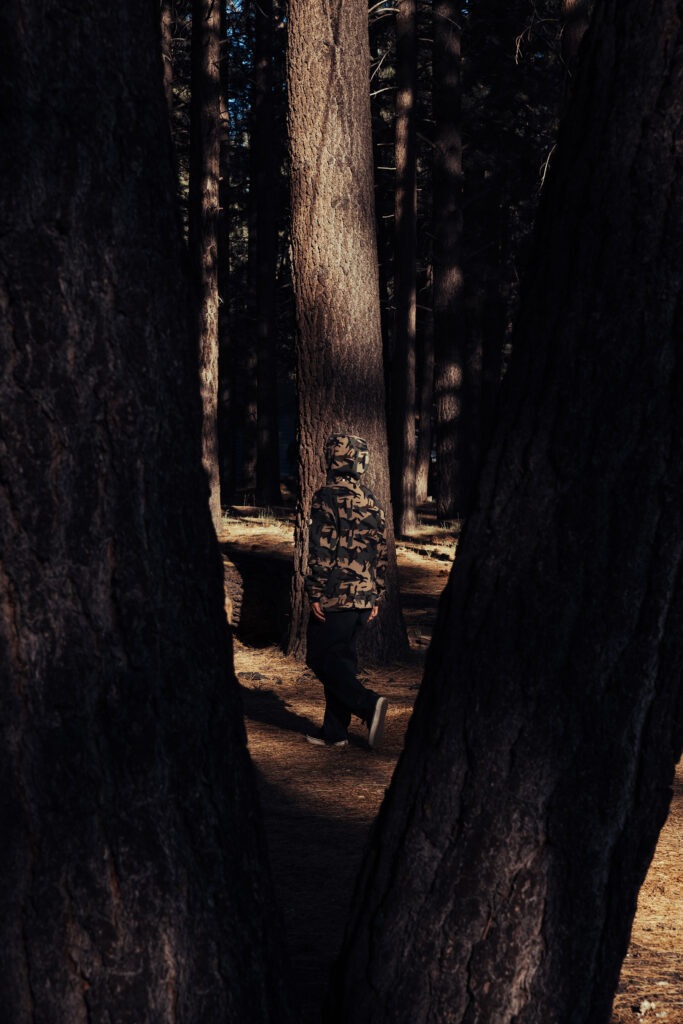 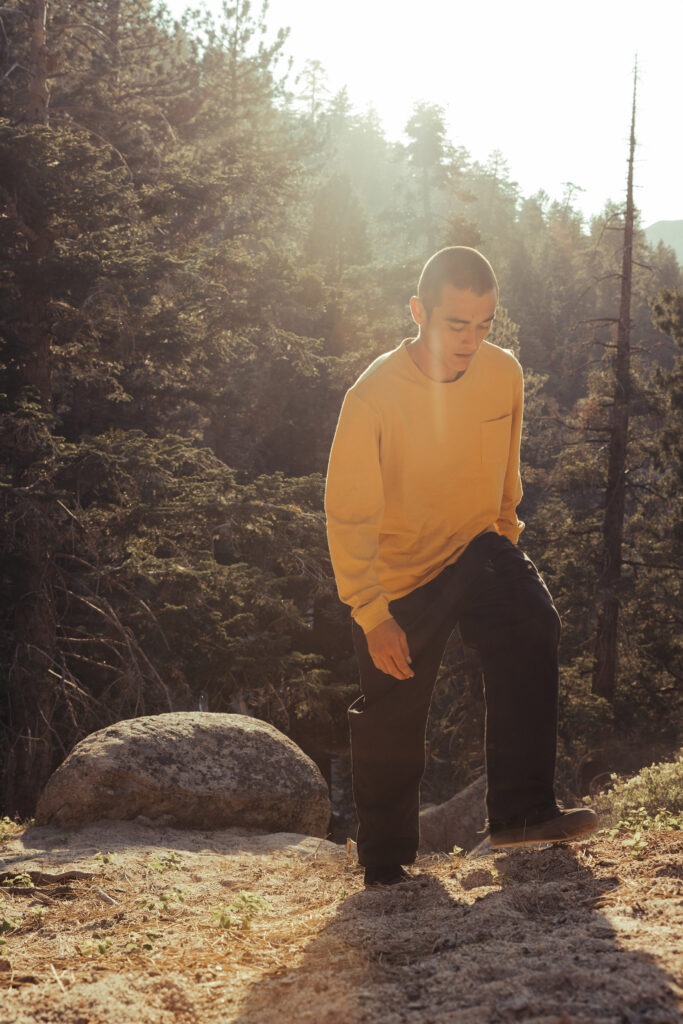 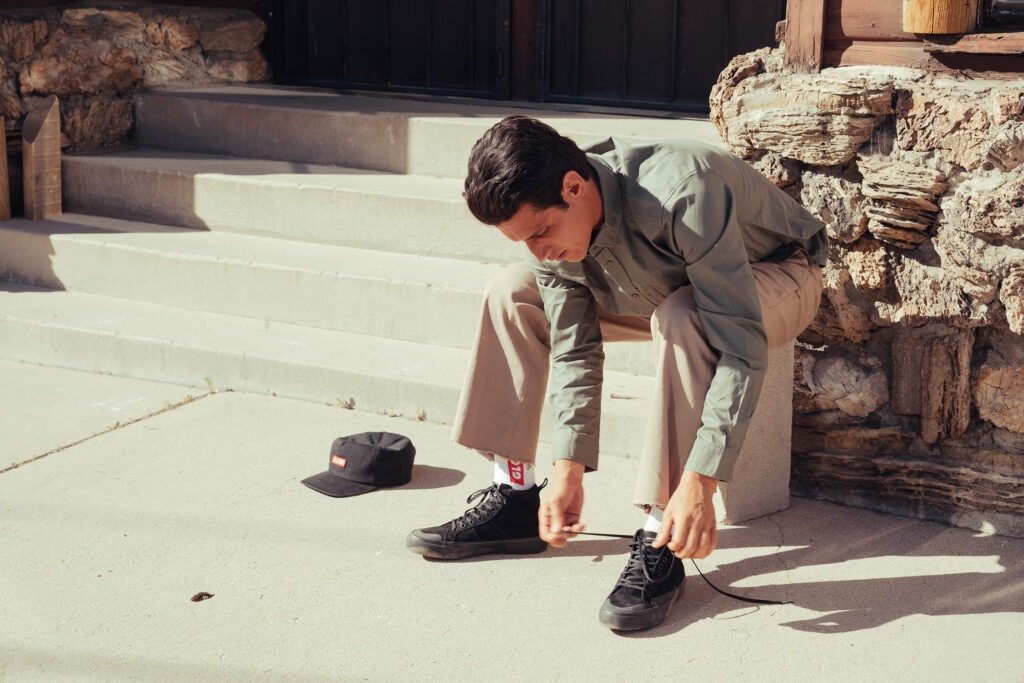 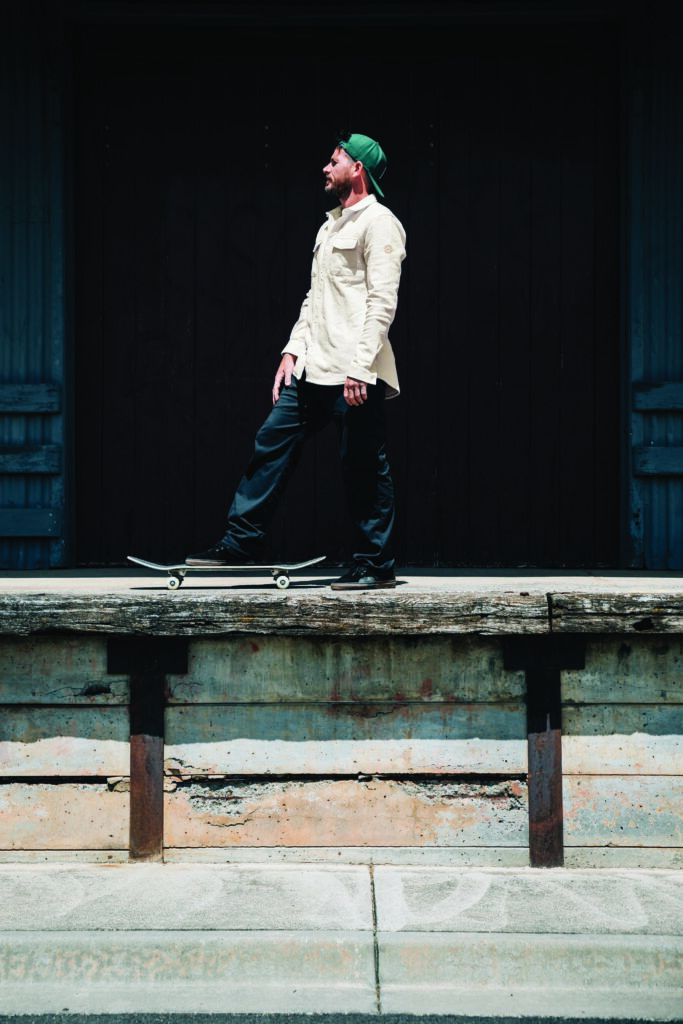 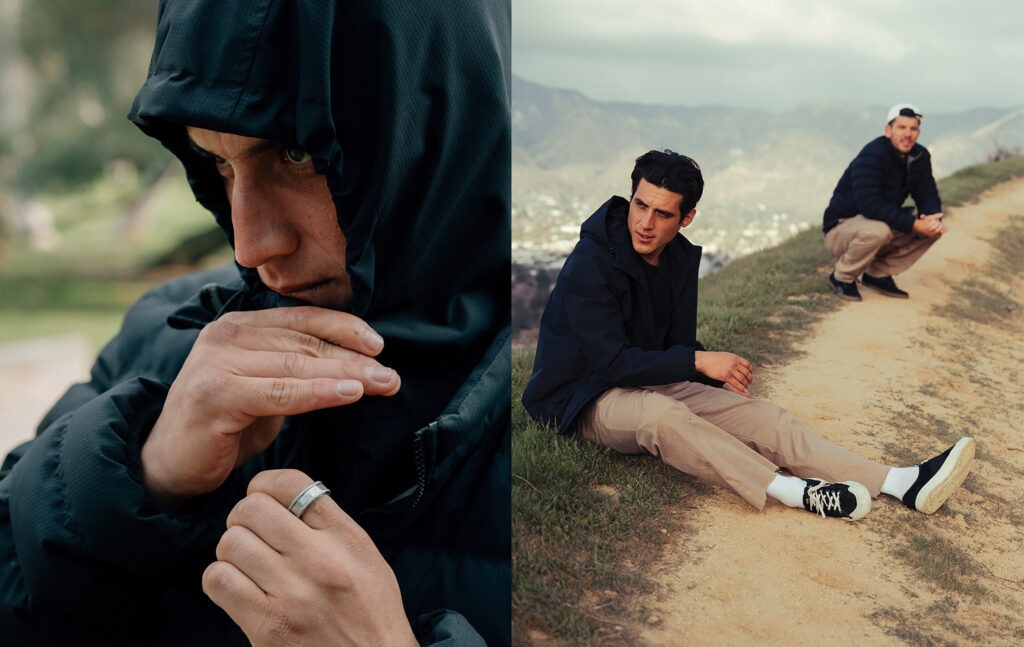 Travel is central to most skateboarders’ lives, with carbon footprints a long way from mind when booking those discount flights to Barcelona for the weekend – do you think that the past year, with all its travel restrictions and people having to make the best out of their local spots, will see a more measured and considered approach to travel when it can happen again? Or will everyone splurge the money saved from not being able to go to the pub on Ryanair?

That’s a really good question. What everyone has seen over the past year is a heightened sense of importance on the planet, pollution and the environment from the general population. We know a lot of retailers are expressing this to us and their other suppliers, and our social media feedback reflects this general attitude from the skate community as well. How that is reflected in travel behaviour will be interesting to see. 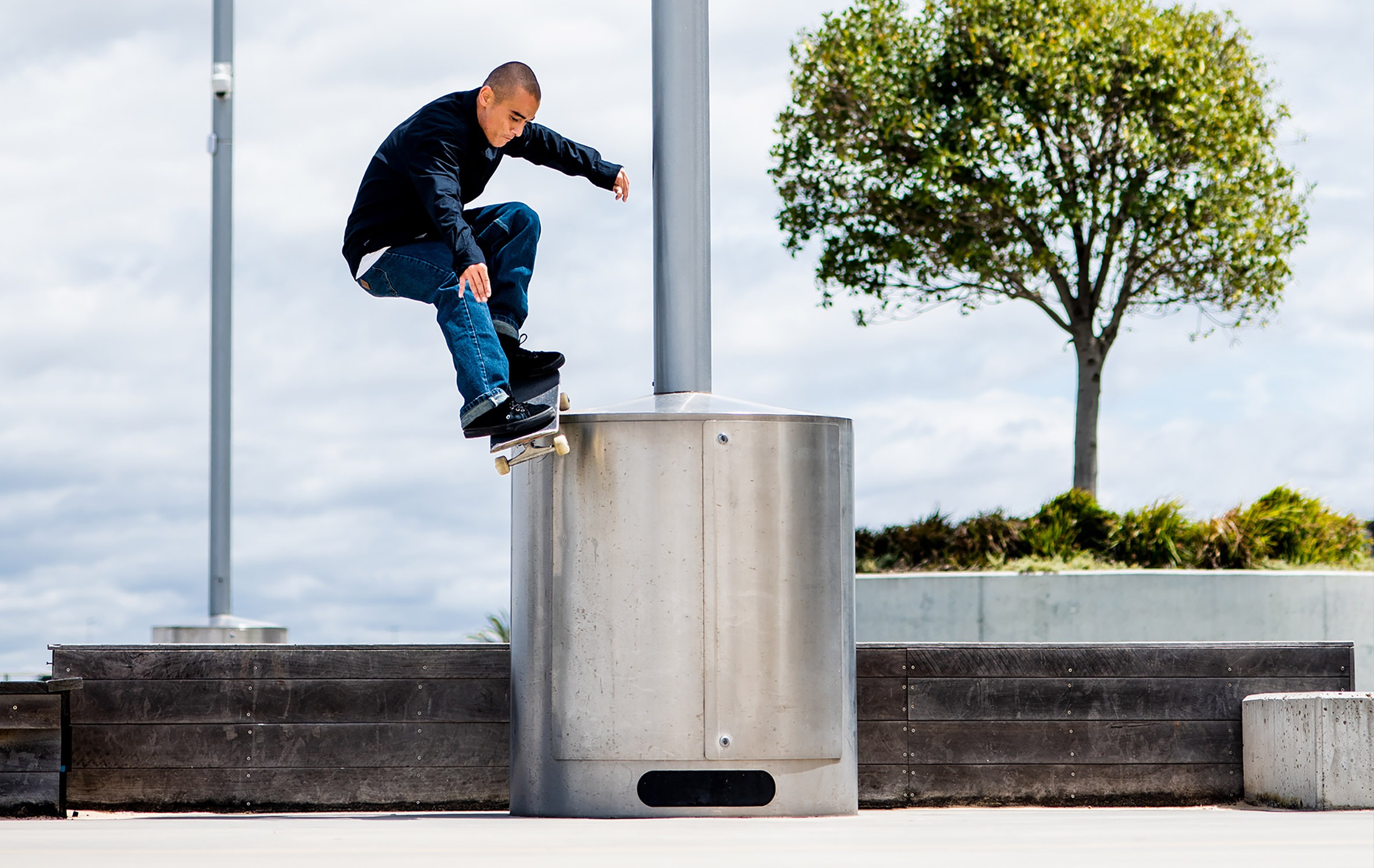 Pushing forward, what are future plans with Globe’s new direction?

We’re focused on continuing to put out the best Low Velocity clothing that we can, and also taking things we’re learning from that and applying it to our footwear and skateboard program where it makes sense. 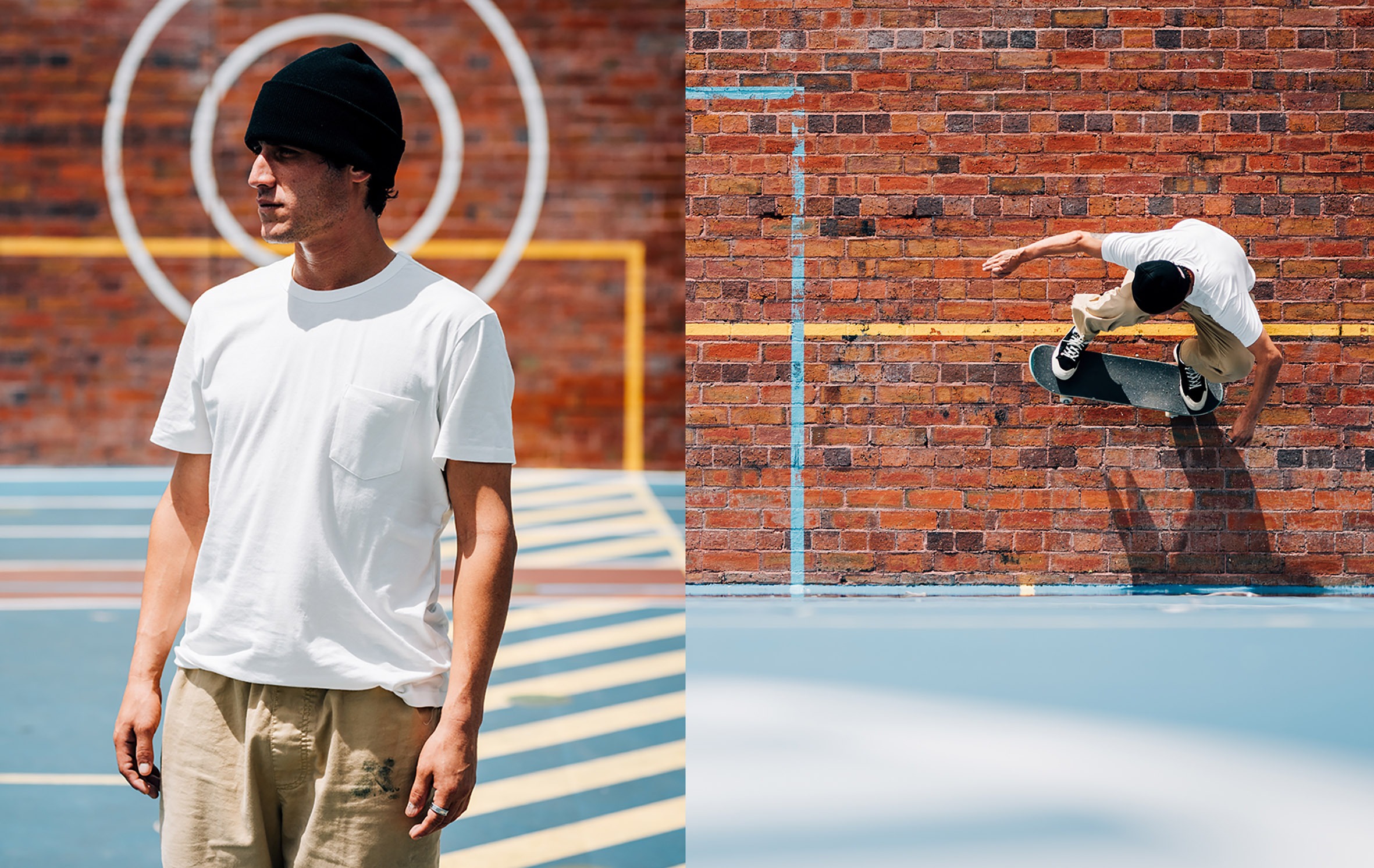 Globe – The Last Time We Went Outside