This year saw Death Skateboards celebrate their 20 year anniversary with not only various jams and events across the country but also a new full length video ‘Into the Void’ premiering at House of Vans. One of the video’s components kept quiet until the curtain dropped was the return of Harlow’s finest Kronenbourg swilling, one foot pivot fakie-ing motorcycle enthusiast Scott ‘Horsey’ Walker to the fold after a solid few years over at Todd Bratrud’s ‘Send Help‘ camp. Due to the wonders of the information superhighway, I was able to bypass the hindrance of time differences to catch up with Horsey and discuss his return alongside travelling the States, booze, bikes, Ben Raemers and more. Read on to see what bought him back to the loving embrace of Death… 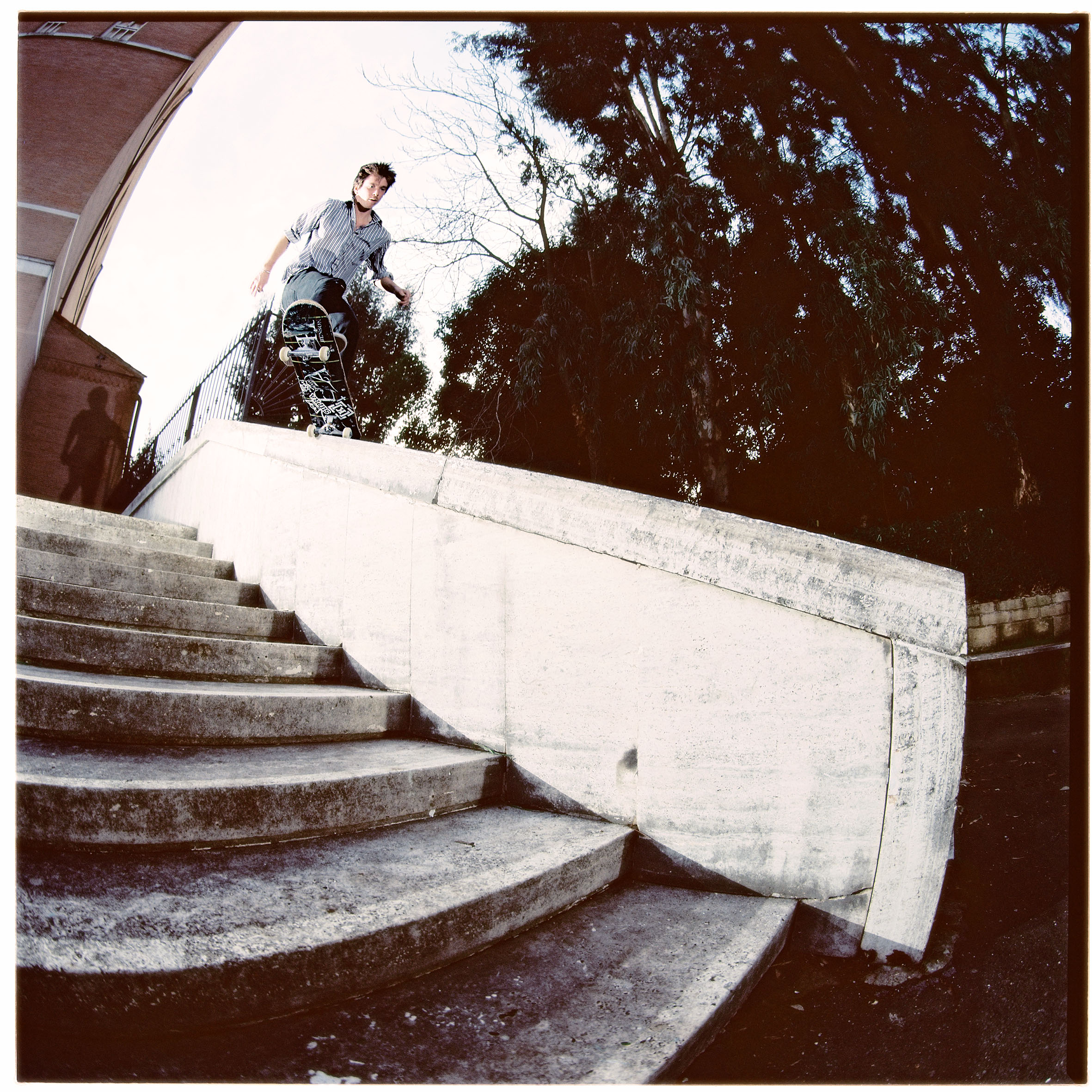 So to start with, how did you meet up with the Death crew and when exactly did they start hooking you up with boards?

As a young lad I would skate Harlow a lot at the weekend and would hang with Mark Nicolson a little bit, seeing Dan Cates come into town like a Tasmanian Devil on occasion. When I was 18 I managed to sneak myself onto a Big Worms Skate Shop trip to Australia for six weeks that Cates, Nicolson and Zorlac were on. Zorlac sadly left on the second day due to a tweaker who was in the gang but I spent the whole trip getting to know the lads and came out of my small town shell. I kept in contact with Cates, later on in the year we went to Barca then a couple of months after that a space came up at the infamous ‘House of Doom’ and I was in by New Years 2004. Nicolson kindly put a sponsor me tape together which was indirectly aimed straight at Zorlac. I didn’t want to be too keen but obviously getting on Death was my goal. Just before Squadrophenia came out I had a talk with Zorlac and he made my dreams come true, from then on it was straight into the madness. 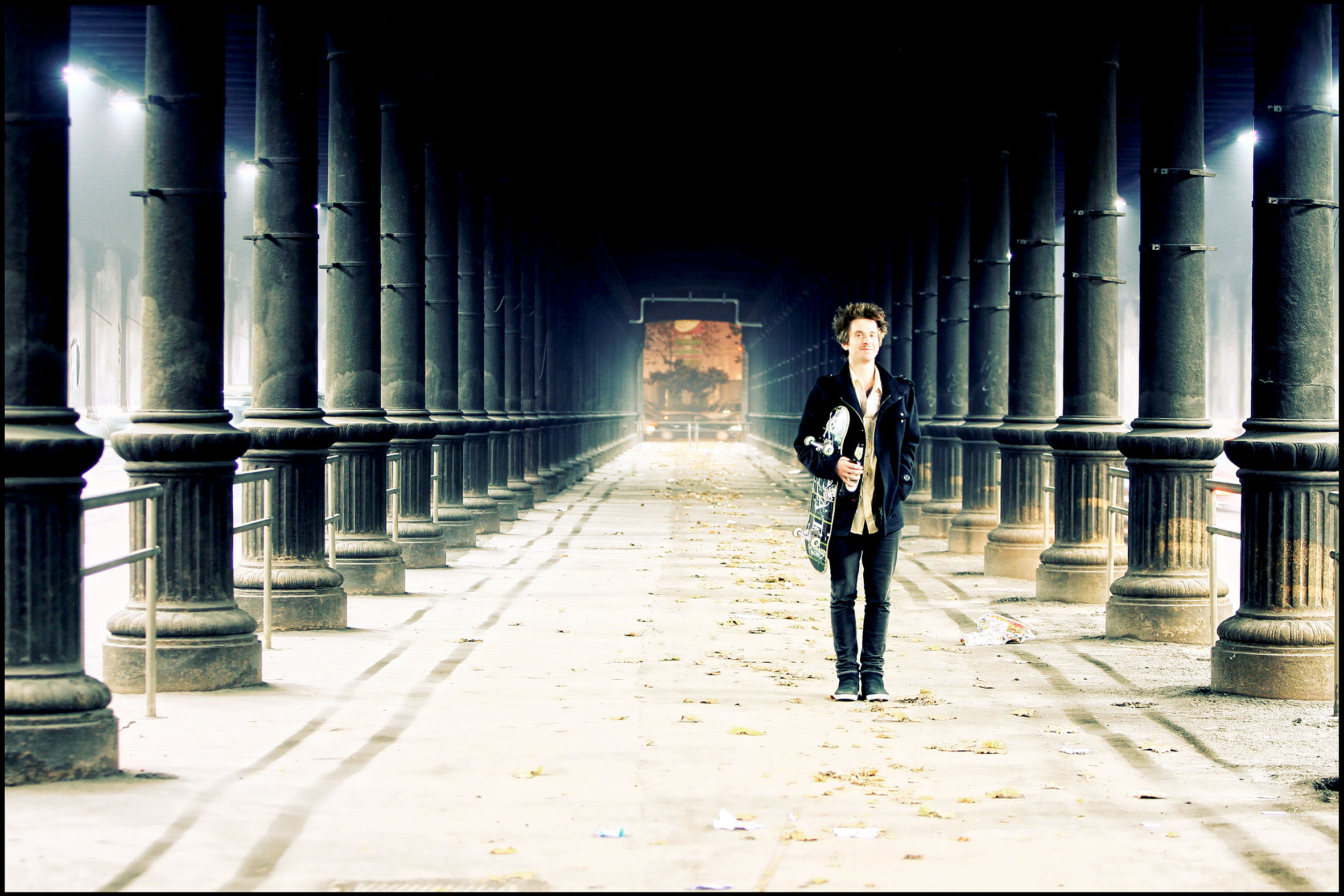 And how was it having the House of Doom to call home?

Living at the house was pretty surreal at first. I had seen all the old videos of house parties with the place getting smashed up, fireworks getting set off and people skating in every room; luckily my room was in the garage in the garden, so I knew if shit hit the fan I could get away from the madness. In all honesty though, it was a lot mellower than expected – I remember a lot of nights in watching old skate videos and eating bacon sandwiches. There was pretty much always one or two people sleeping in the living room, there would be a knock at the door and some lovely weirdos would be staying down for the weekend. We had Richie Jackson and Schooner for a couple months when I was first there, the ‘Sunday Tossers’ would always be about plus Harlow locals at the weekend. Everything was about skating which was an amazing thing to get stuck into at my first home from home. 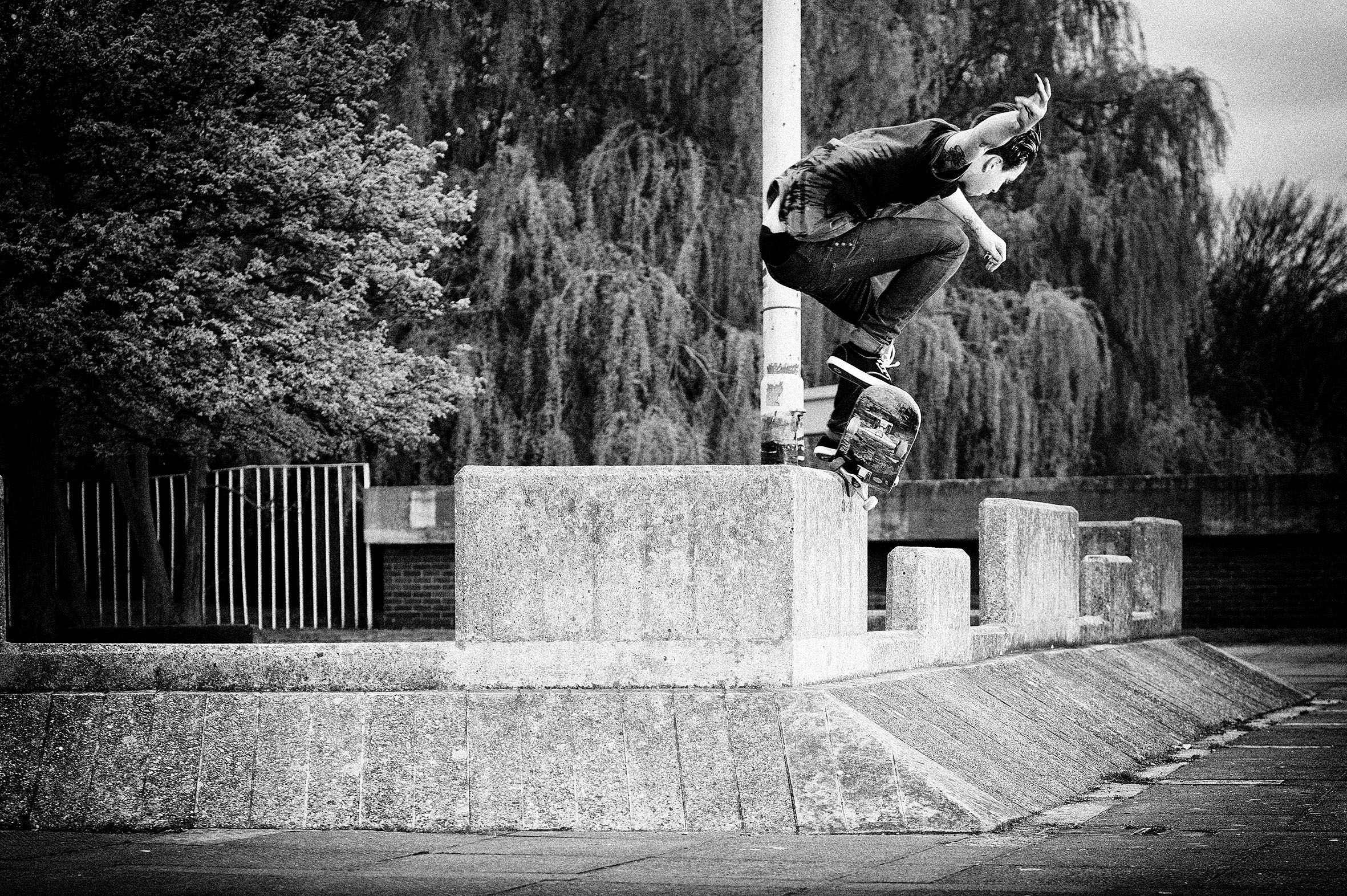 And now you’re back on after a fairly long period riding for Todd Bratrud’s Send Help – what lead to you leaving Death in the first place, and what has bought you back?

Leaving Death was a seriously tough decision. At the time I was spending about half the year in the States with Todd and via Supra and Kr3w travelling all over. Todd was in the early stages of starting up his company The High 5 whilst I was around for a two month jaunt and it was all super exciting seeing it coming into effect. I wasn’t unhappy with Death, it was all pretty perfect. Nick always had my back but the thought of something new and challenging got me excited. It was very selfish, but I hoped that Nick would understand. Looking back, it was a real kick to the teeth as he had done so much for me and helped me get into the position I was in to even make that decision. Things with The High 5 started off with a bang and the next couple years were full of the best trips. Distribution troubles led to the name change and Send Help was born. Todd is a relentlessly hard worker and has sacrificed so much for the company. He is one of my best friends so having to make the decision again was a killer but I think he understands. I just bought a flat and my lifestyle has changed a lot, not so much sleeping on floors and spending every penny I make on travelling. I’m in my 30s now but I’m still hungry to get busy and make things happen; Death is my home and I’m so happy to be back.

Horsey in ‘Get Born’ for Send Help. ~ Edited by: Jackson Casey

And I guess people who were at the premiere already know this, but as I’m on the other side of the world – did you have time to put together a full part for Into The Void?

I had some footage but sadly not the part I would have wanted. There was no genius masterplan with this one so no time to get myself sorted and out filming. Picking the dead of winter to stage a comeback part doesn’t really work out too good, I found. Luckily Jake Martinelli had my back with some clips from the summer and also Ryan Gray had some dingers. I’m just grateful I got in there with the rest of the legends and now I can look forward to working on something next year. 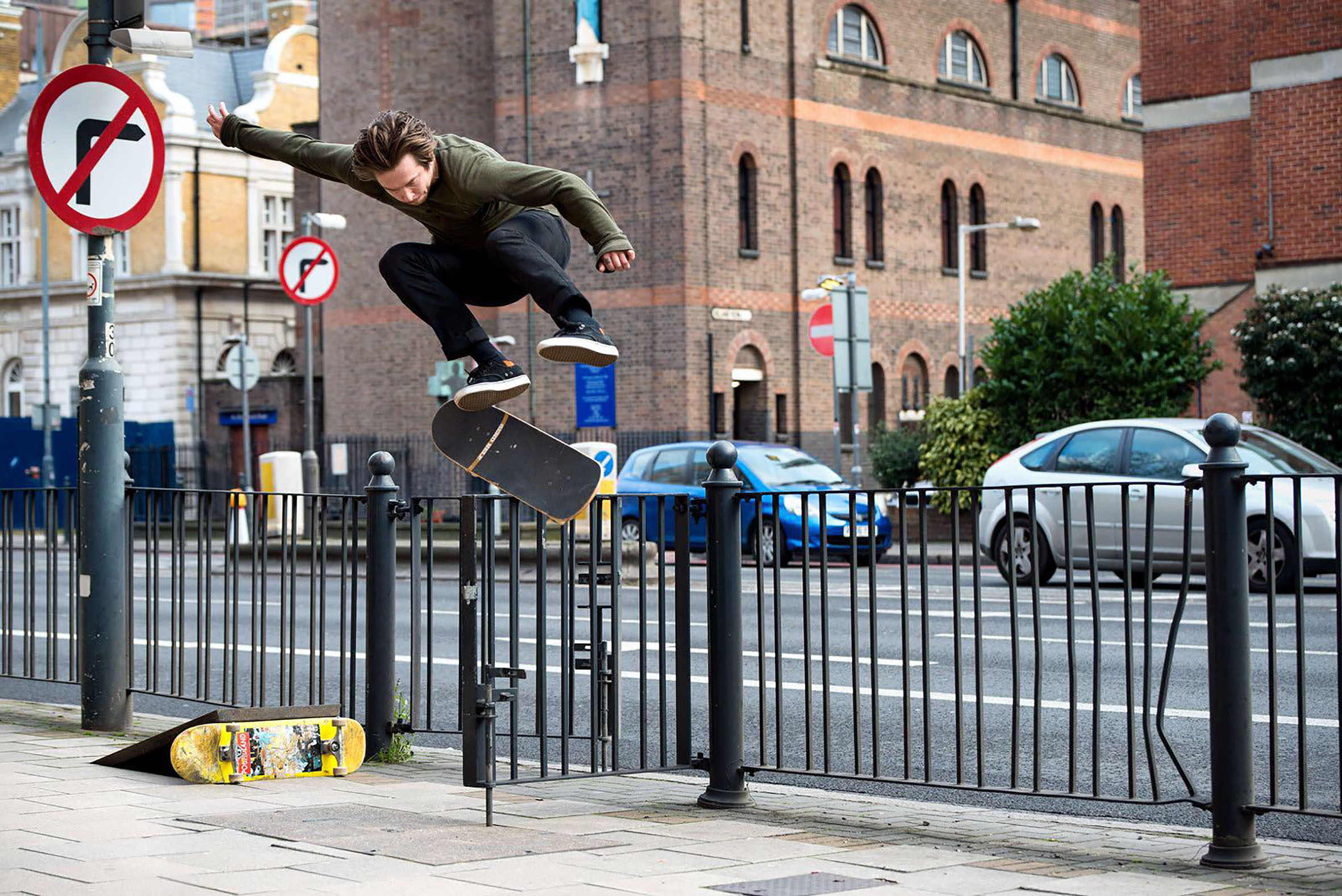 Talking of Jake Martinelli, can we expect another Rugged Raw video dropping anytime soon? Or have you got any other video projects in the works? Since we stopped doing the Boroughs clips for Sidewalk there has been talk of another Rugged Raw video but at the moment Jake is on a bit of a hiatus. He has a little time off now and then but comes back even more hyped than before. I’ve been chatting to Cates about getting something going which might start at his bowl, but we shall see…

And are there any upcoming plans with SHUK Dist?

The days of SHUK Dist are numbered – I’m going to get a few accounts sorted then close the doors. It’s been a labour of love that started off so well, then I think I took on too much. I was having days off work to sell and ship boards so I was losing money and then at the same time I was getting complaints that I wasn’t selling enough. Also once I helped sort out getting Send Help distributed, getting boards from the States which then added about £7 onto the cost (thanks Brexit), I knew I wouldn’t last too long. Anyone that can keep a distro or skate company alive is either truly mad or incredibly smart! 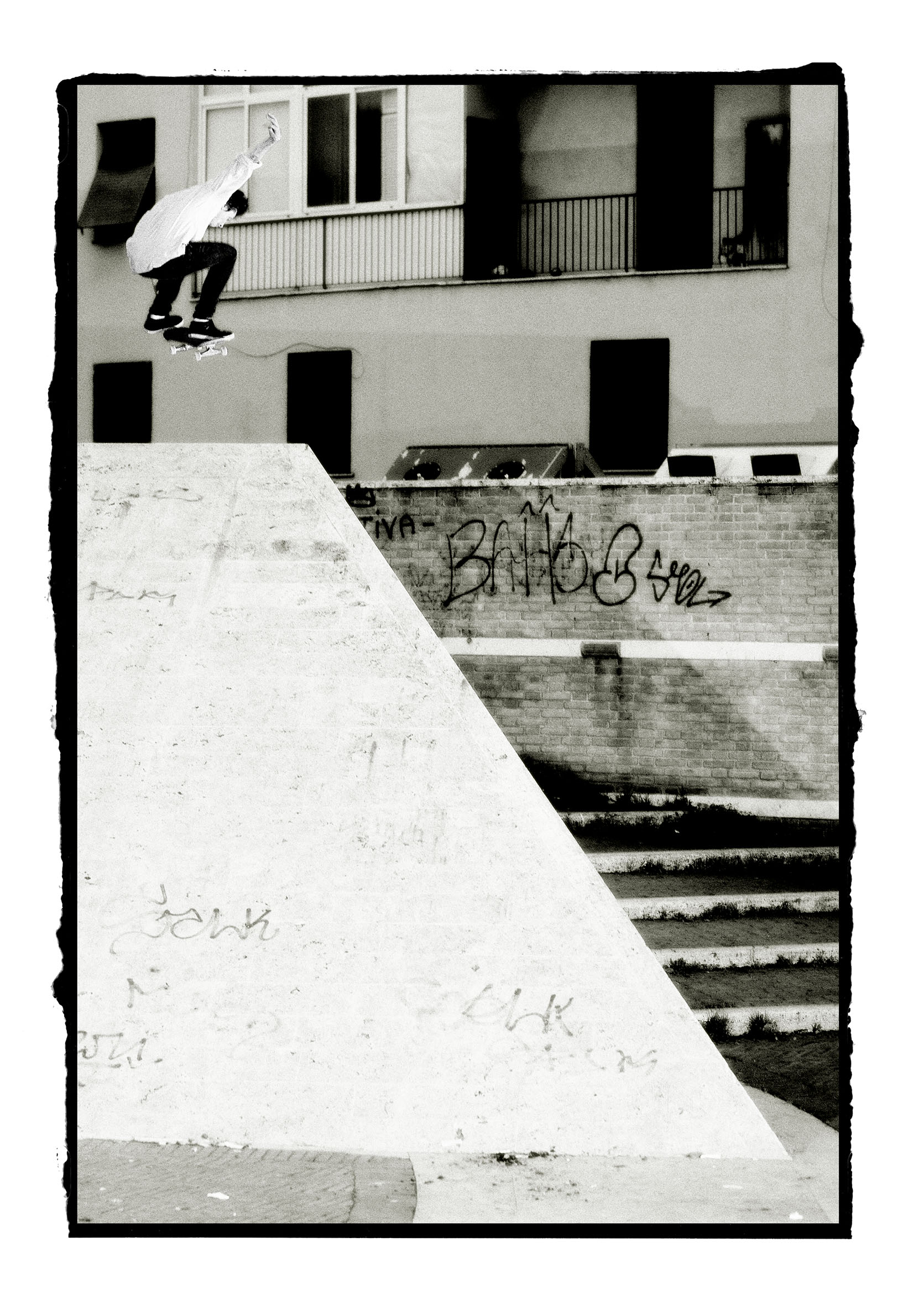 It’s a big thing to try and fit in with a full time job! Moving on to non skate related hobbies, did you pick up your interest in motorbikes during one of your trips to America? It seems as if the scene is an in depth and incomprehensible to outsiders as skateboarding – when I transcribed the Max Schaaf interview you did for me, a good chunk of time was spent typing words phonetically into Google to see how they were spelled and what they actually meant…

I always had a fascination with motorbikes – I was told I wasn’t allowed one as a kid, which obviously made me want one more. Like most people you get one for the convenience, but then you see upgrades you can get or the sparkly paint and before you know it your thousands deep in a old Harley. The scene is so similar and built on the same foundations; you have your crew and you mission somewhere to hang out, talk shit, show off, drink beer and eat crap food. We are all on the sly trying to out do each other and be the coolest, whether it’s doing the biggest skids or the longest wheelies. To me riding a bike is like being on a downhill never ending snake run; it’s never not fun. 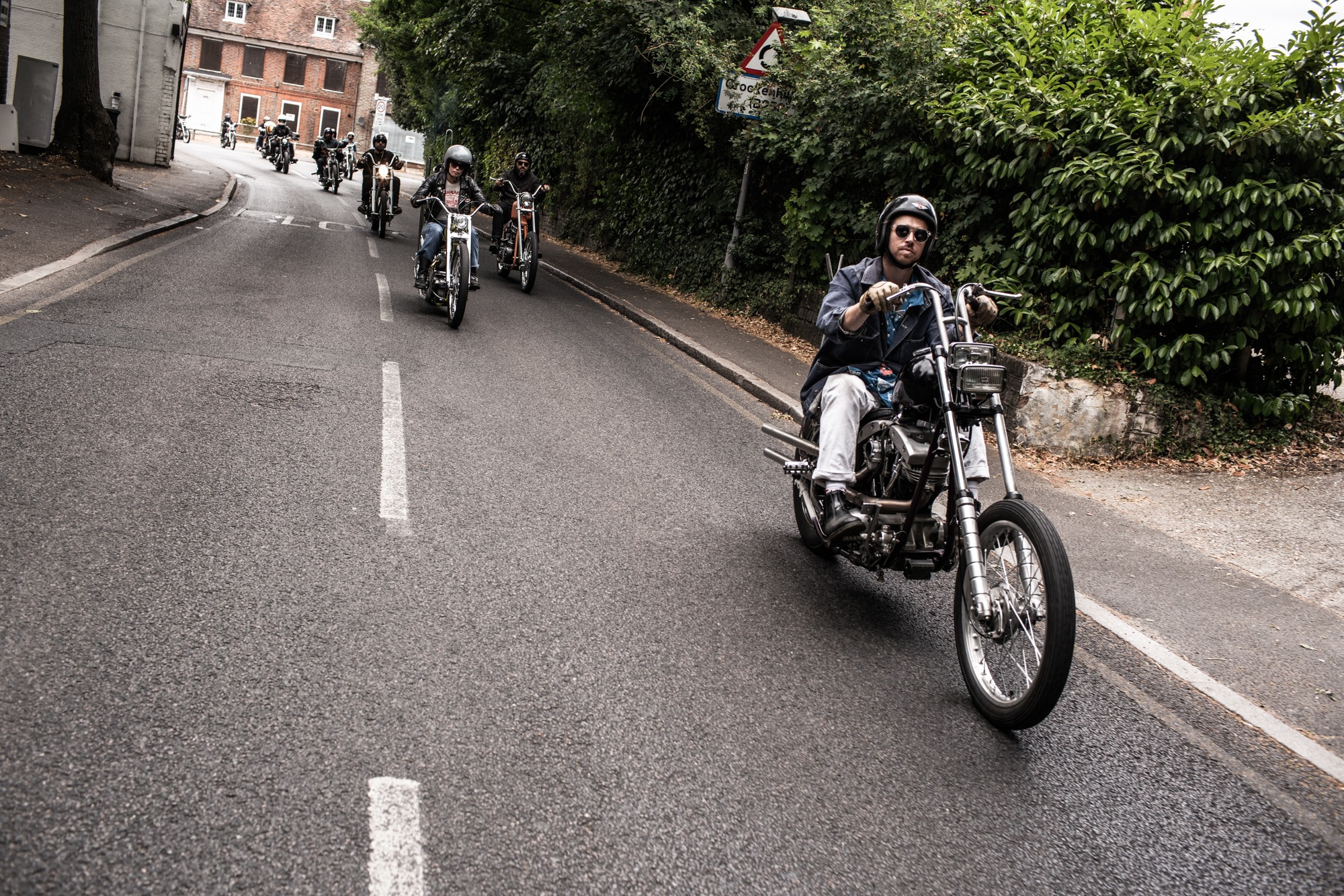 Horsey and the bike lads. ~ Photo by: Sam Christmas

To wrap this up, here’s a few quickfire ones; Best and worst tenants to pass through when you lived at the Death House?

Worst – Them stinking boys from Sheffield who would come down and spread out in the living room for the weekend. 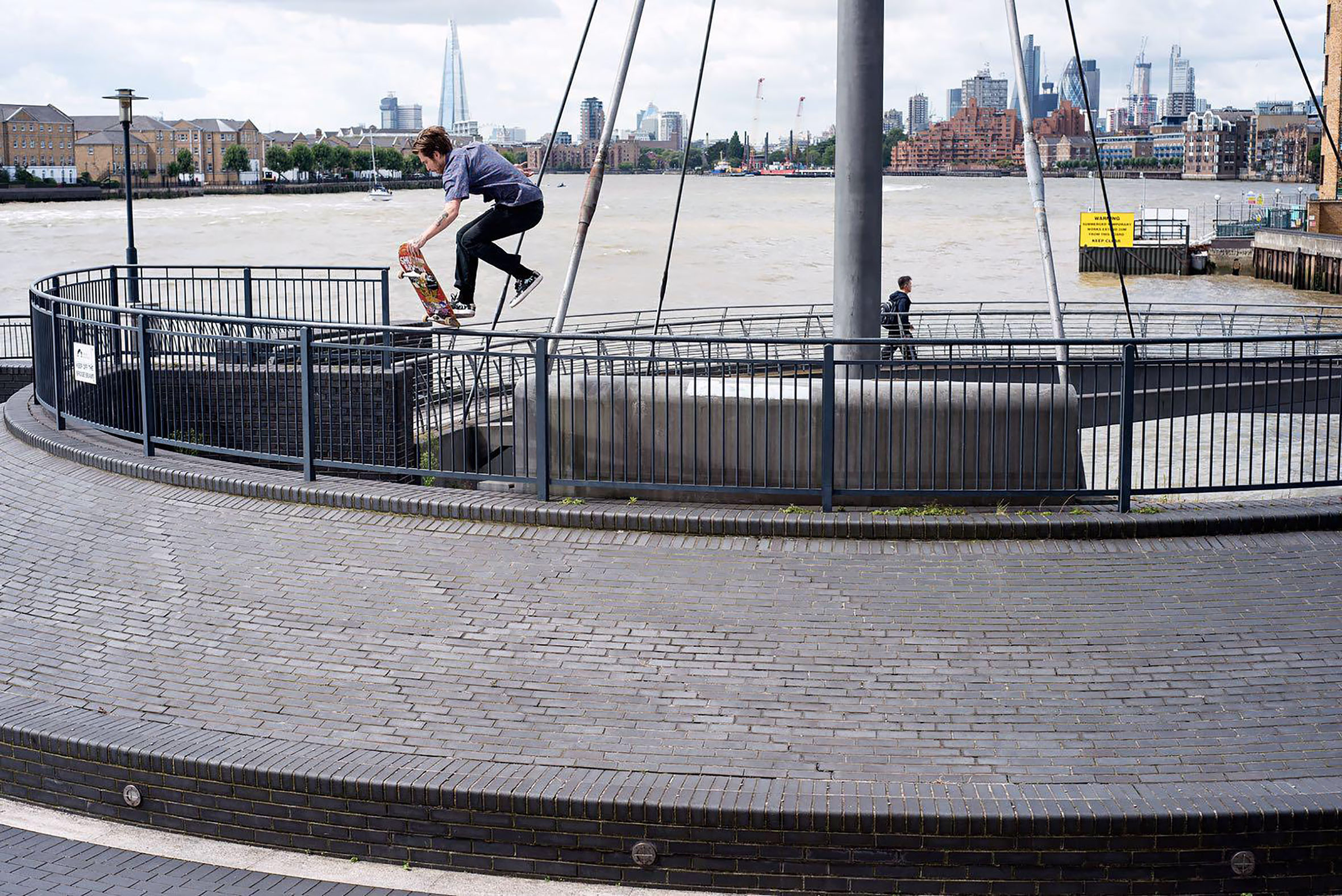 Funniest Ben Raemers moment while filming for your shared section in Albion?

The best thing was at Archway Banks when he does that wallride fence bash and back into the bank. All of London’s trendiest ex Blueprint (RIP) / Slam City chaps were there just rolling around doing some flips and skating the bank, then out of nowhere Raemers is just bouncing off the fence like a nutcase. Right then they realised seeing Ben skate was better than watching Gino push. 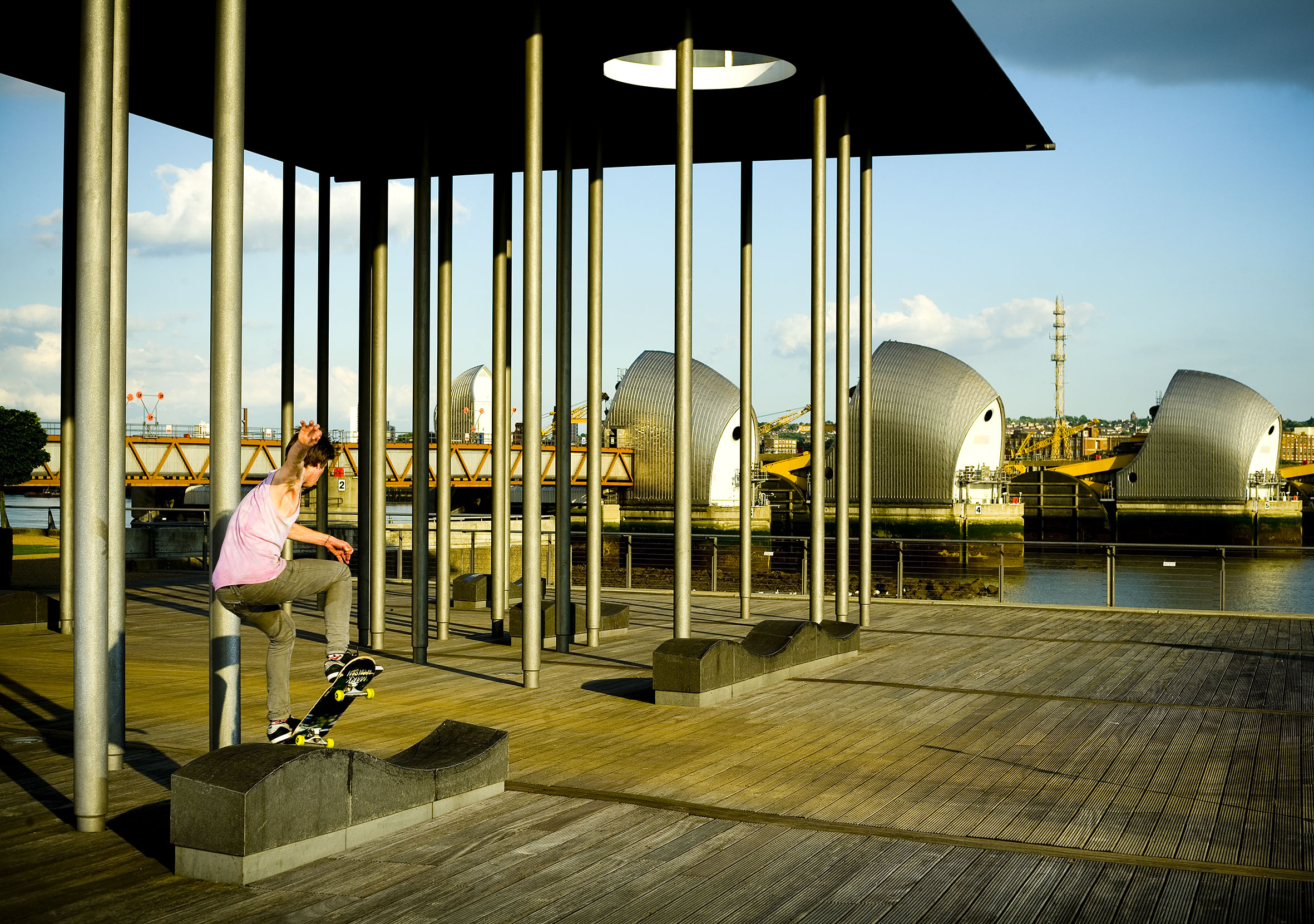 Probably the drop in Hackney just around the corner from Frontside Gardens – super skinny with a kink then an ollie over a curb. He drank at least two litres of White Ace beforehand, ate absolute shit and then did it perfectly.

Bloody Mary’s with Josh Cox for starters, Kronenbourg throughout the day then finish with a passed around bottle of Prosecco. 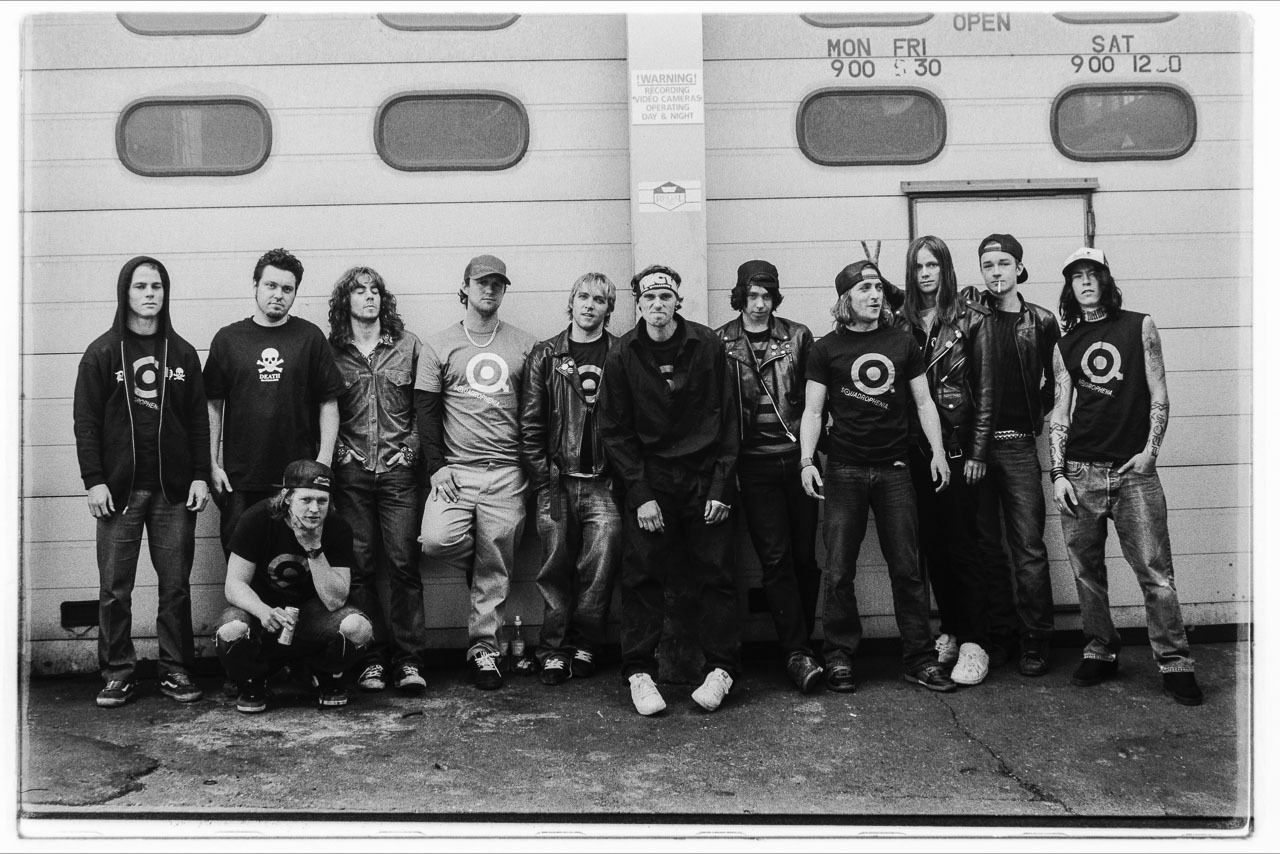 Thanks to Todd Bratrud for all the adventures over the years. Thanks to Zorlac for letting me plan the big 20th Death party at HOV and for giving me another chance. Big up Cates and Chris Johnson (hub life). Thank you Brixton, Emily and Jerome for keeping me in the freshest clothes.

Song by: The Gaggers – Outta Your Mind

Horsey shredding the streets and garms for Brixton clothing for Throwback Thursday.