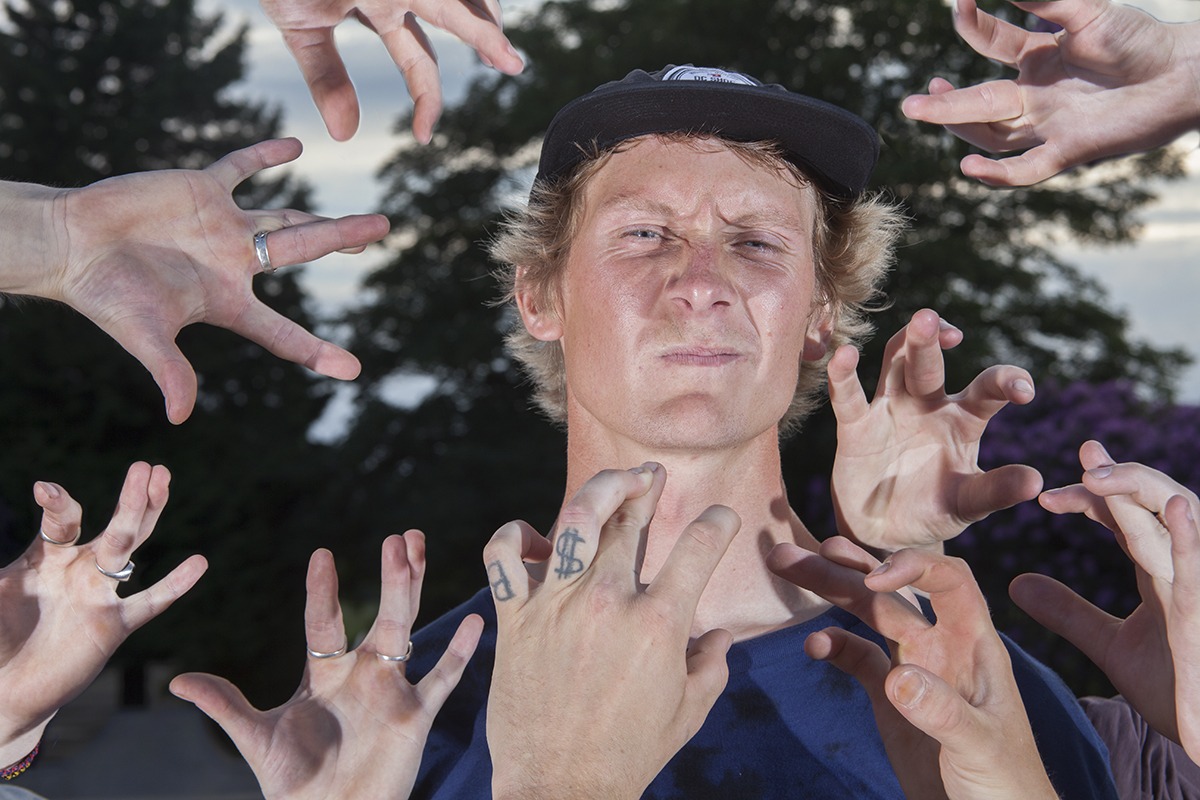 The CRV is omnipotent!

What are the origins of CRV WKD and how did it transition into the impenetrable beast of a board company it has become?

Carve Wicked originated in 2070, even though it’s always existed. A really shit, fat half robot version of Jake Collins time warped from the future to tell me about CRV WKD, but it was too late as I’d already written it on his griptape in the present day. As I said the Carve has always existed, but it took on physical form circa 2012, when some really shit soft goods became available with bad graphics and terrible quotes. Since then it’s kind of fluctuated until now, when it’s taken on it’s most glorious form. Its always been on the cards to create the ultimate carve sticks, but has only just come to light thanks to a fine body of men who believed in the Carve enough to get it off the ground. Super stoked on the whole thing to be honest, all the boards came out spot on and it was definitely worth all the fannying around with shapes/sizes/wheel bases/concaves etc to generate some high performance wizard tools.

Was it your idea to make it into a board company?

I’ve always thought it would be cool as a board company, and quite a few fellas have suggested it over the years. But its not that easy when you’re a skint bellend that avoids work like girls avoid Beanhead. Since being helped out with some superficial paper sheets (definitely not from drug dealers) I’ve become able to put ridiculous shit onto nice stained bits of wood. REAL NICE! 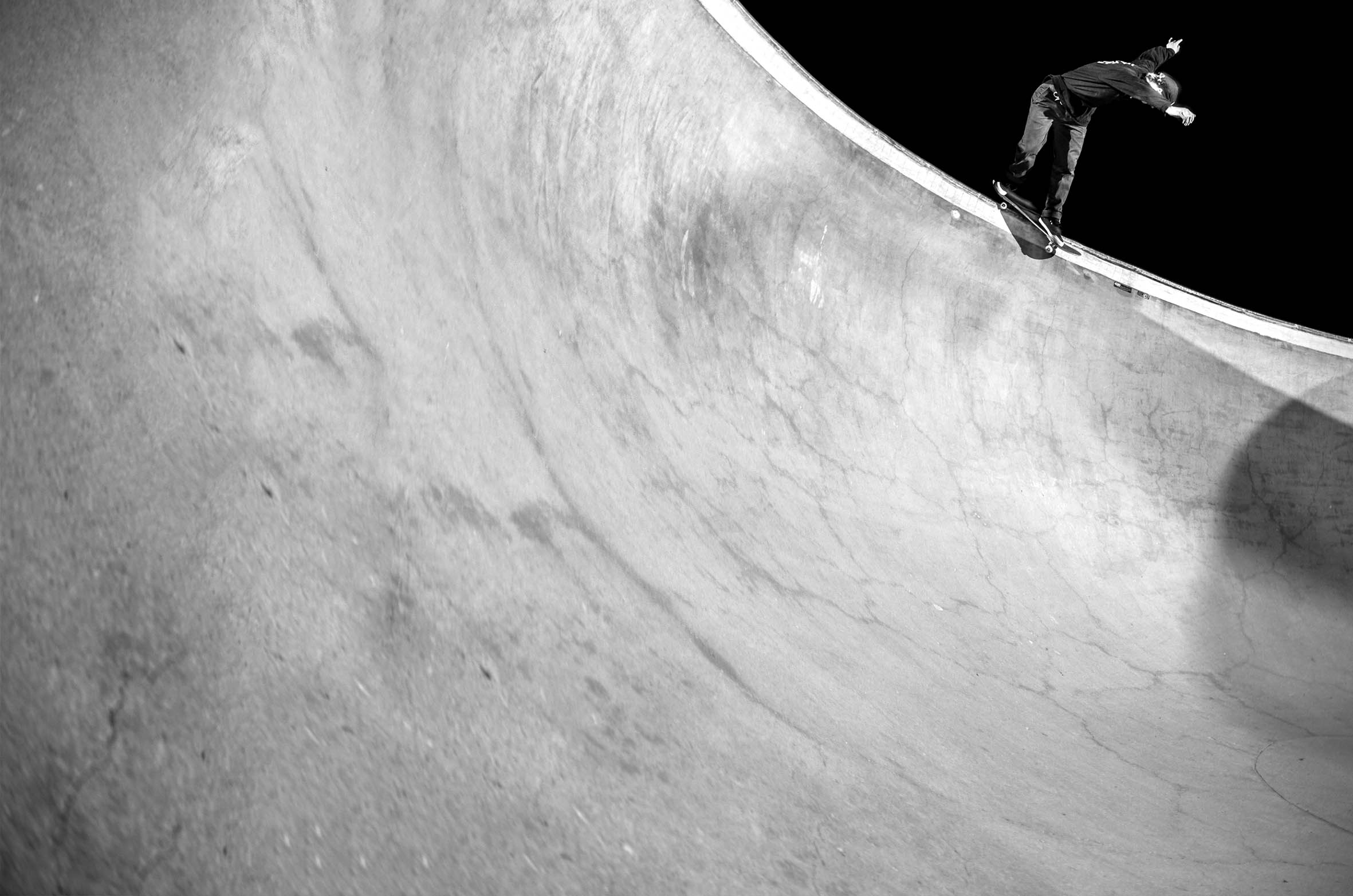 As we’re all aware, ability doesn’t matter and it’s banging to just see someone going for it regardless. I’ll list a few people from all variations of CRV category that most definitely have wicked carves, E.G Carve Legends/ Carve geniuses/ Carve soldiers.. Student James, Peter Hewitt, Chevy Chase, Rune Glifberg, Chav Dan, Jonny Ashfield, Grant Taylor, Slam Buckett, Lloyd with the crazy van, Jeff Grosso, Tom Knox (both of them), Harry Lintell, the monkey from MVP, Stu Graham, Div and Colin, Benson, actually everyone in Scotland, Raven Tershy, Clarky.. (there’s too many to list I’d be gassing for hours) Can’t forget Wirral’s very own Dai Jones too, I saw footage of him doing a front shuv wallride down some stairs. Heavy bra.

Are they on CRV WKD?

Yes. All of them. 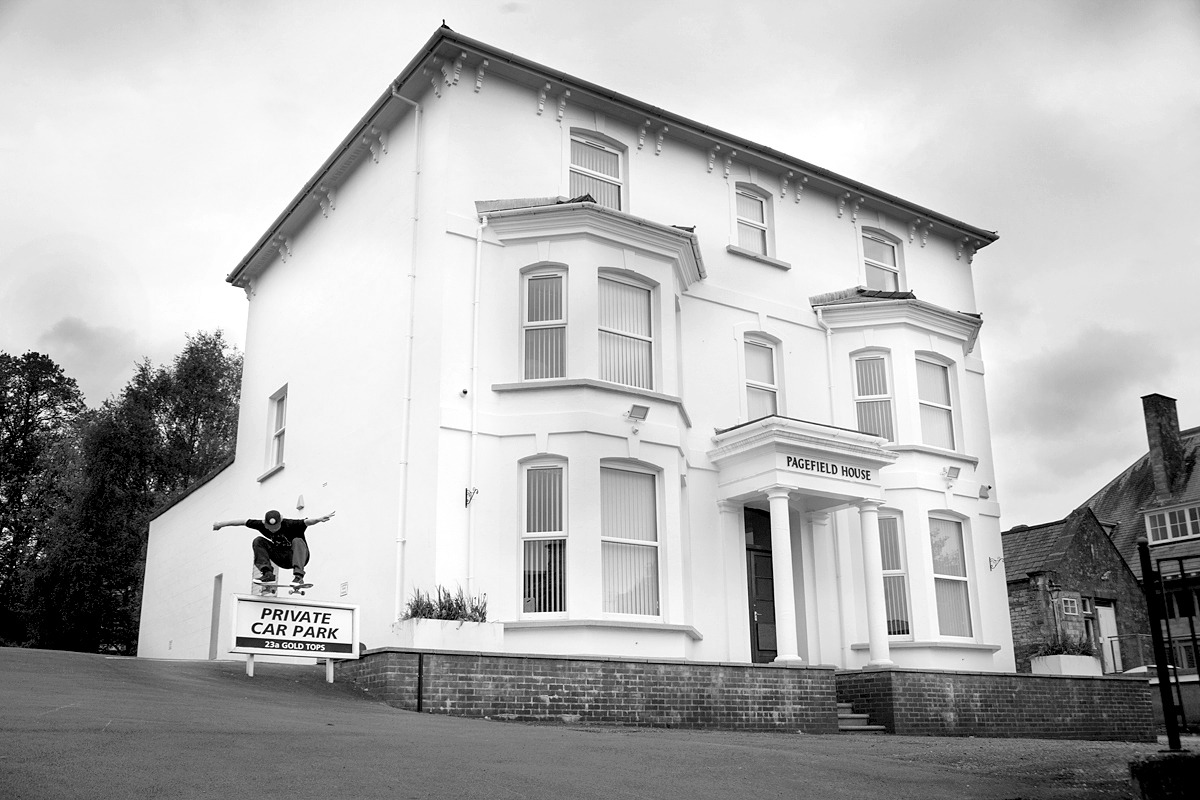 If CRV WKD was a weapon, what weapon would it be?

It would be a marigold that would let you chop cars in half. Deadly, unexpected.

If CRV WKD was a drink what would it be?

It would be a liquid that came in a silver bag. It would say Space Juice on the bag, and have some sort of knock off NASA logo behind the text. It would be delicious and the effects of the beverage would be determined by the consumer only. Either that or sea water. 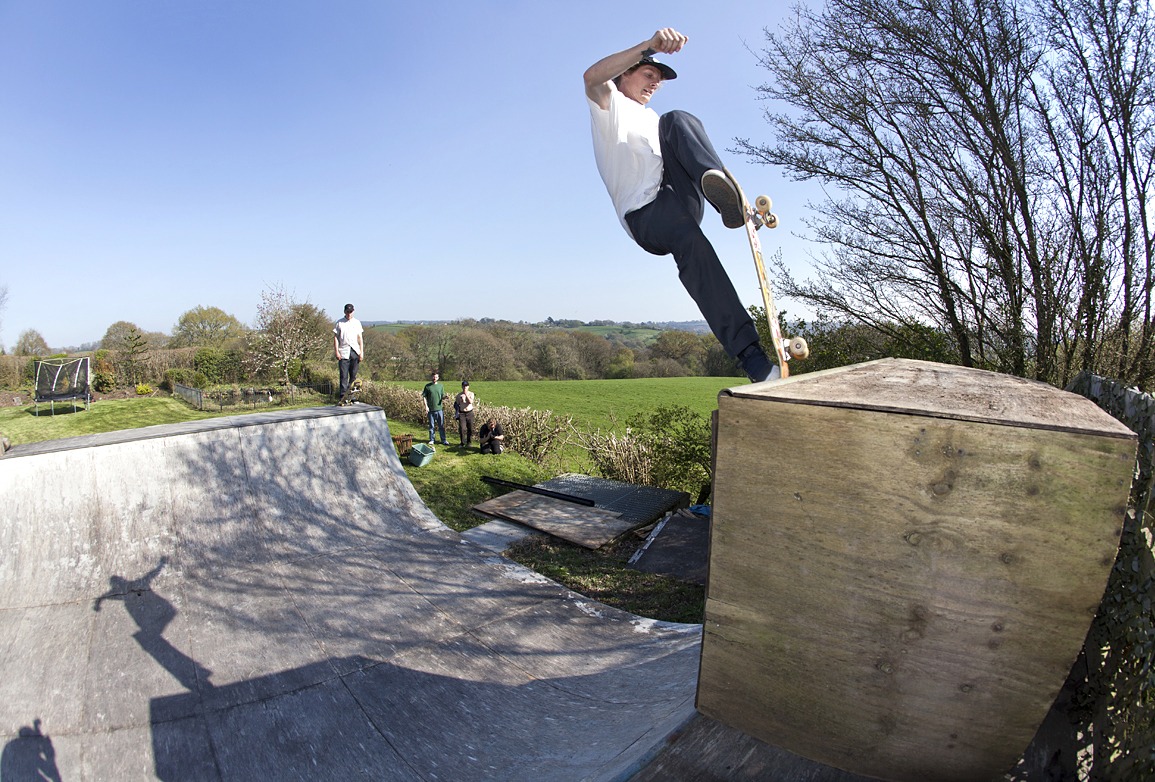 Classic Front Blunt on the extendo

How many ideas have come from having a poo at Donalds and is this a location you’d be open to having official meetings there, with the accountant and such?

Pretty much any idea I’ve ever had has been formulated within the confines of Donald’s bog, during brown outer-course obviously. Not that I’d condone eating the poison they sell, its just such a lovely and non judgemental environment when you need to file some stinky paper work. And yes it’s the most perfect and rent-free space to hold important meetings. My local Donalds has my name on the toilet door, please knock before entering. Thanks.

Who is Bean Head and is he on CRV WKD?

No one really knows to be honest. He appeared on the scene years ago, and was rumoured to have been moved from the south of England on a witness protection scheme. This could explain why he’s such a smelly weirdo. He kind of shows up places, and then it starts pissing down and everyone leaves, then he asks you for money. He is most definitely not on CRV WKD.

Who was the artist behind the opening series of board graphics and did you suggest what the images should be?

A lot of people are people are responsible for the opening series of board graphics. It’s always been the same with the CRV shit. E.G I used to get an idea for a shirt and then knock something really shit up on Microsoft Paint (better than photoshop), and then go to Baileys with it and he’d turn it into something useful. It would never have succeeded without the help of several keen fellas dishing out favours and handling all sorts of ridiculous requests. It’s the same story with the graphic ideas too, there’s been input from all sorts of mukkas, and I never would have come up with most of the ideas if it wasn’t for constantly chatting garbage with fellow carvers. Big thanks to Hass, Jon Horn Dog, Old Dirty Branley, Big Gay Al and everyone else for trading brain information. 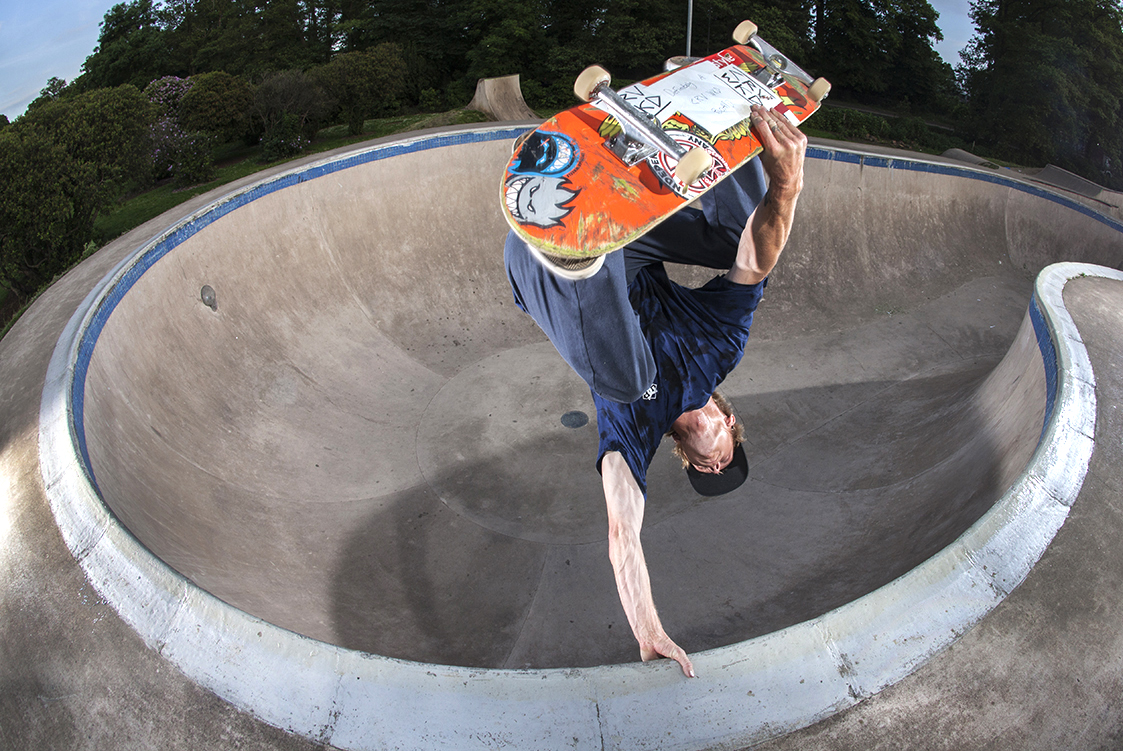 Eggplant in the deep son!

You’ve announced the company with a new promo filmed by Harry Deane making it a solid travelling unit, what were some of the best places you skated and who had the most hospitality?

Fair play to Big Haz, we couldn’t have done jack shit without that fella. He has 2 days off a week and dedicates them to filming the fellas and necking cans out of my shoe. Top mukka. I’m pretty sure the promo is mostly UK footage. I’m sure SOX got some pretty good hospitality on his travels and met some sounds fellas in Australia that hooked him up with a bed and a camera. Always love a trip to the big smoke and staying with Dogg and you fellas, that’s some proper hospitality there!

What were some of the highlights for you filming for this?

The highlights are the whole shamonka really. Hanging out with ass bluds, skating spots I’d never seen before, smoking baileys vape pen. Above all I’d say the main highlight is that Bean Head didn’t come on many filming missions…

How many hats have been peaked whilst filming for this promo?

To be Honest I haven’t seen a peaky for a while. I think Copenhagen brings out the urge to peak, and that may even be the last time I saw one. Jake Collins you massive asshole.

How many in total? 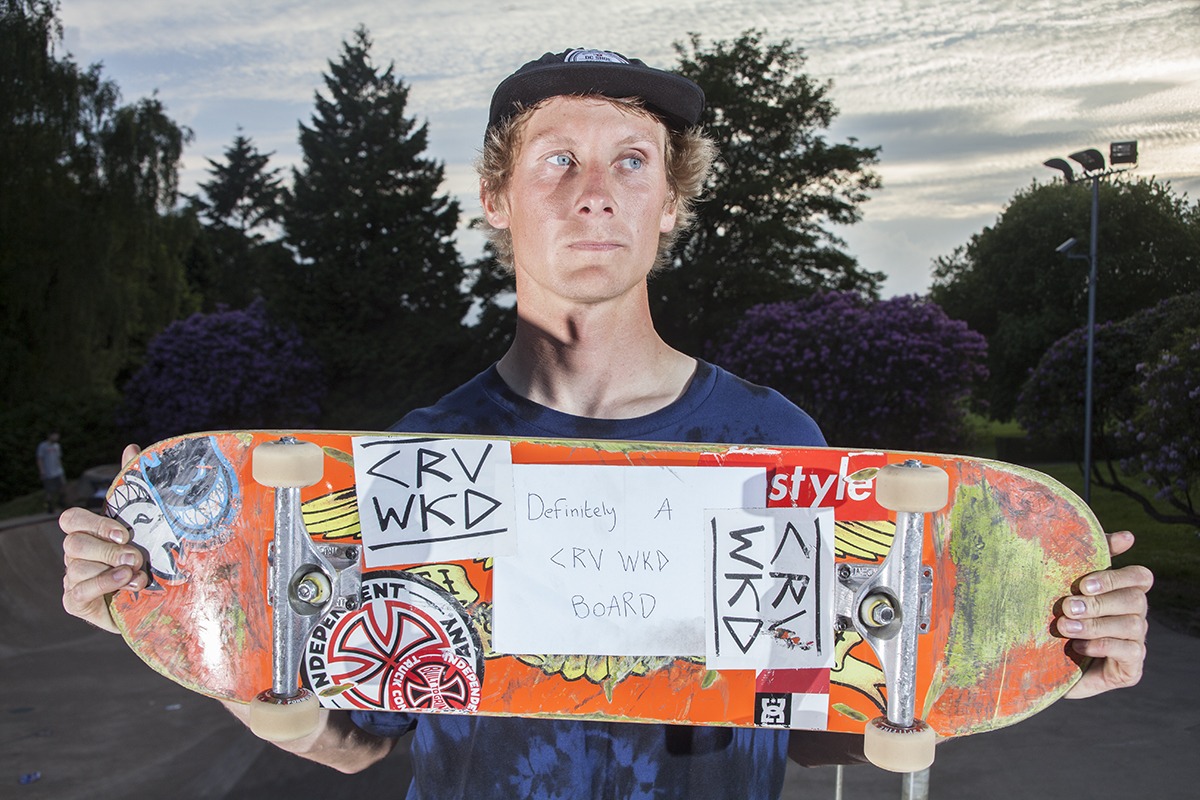 Deny it if you dare!

How many shoe-eys have been consumed whilst filming for this promo?

I couldn’t tell you, all I know is we’re approaching 5 figures for sure. We recently went to Scotland (Sometime in May), and I can quite clearly remember counting at least 900 shoe-eys on the second day.

What are the best and worst liquids that have been skulled through a shoe?

I’ve only ever gone as far as a couple largs down the gullet via shoe.. I’ve seen some Russians skulling some pretty dark brews on the web, they fucking love it. I think its possible to combine the shoey and the bubbler to create a trifecta of jerk power. We’ll find out soon I’d imagine.

What’s the best shoe to use to do a shoe-ey?

UK 9 Evan Smiths in blue seem to be the all round all terrain shoe skulling device. The beer (or other chosen liquid) sits perfectly level with the air holes on the side of the shoe. So if you pour 500ml into the shoe, you get 500ml out. No spillage whatsoever. And that’s the beauty of the shoey, its such a fresh concept that has hardly been explored. Think how many more varieties and brands of footwear there are to suck lager out of… 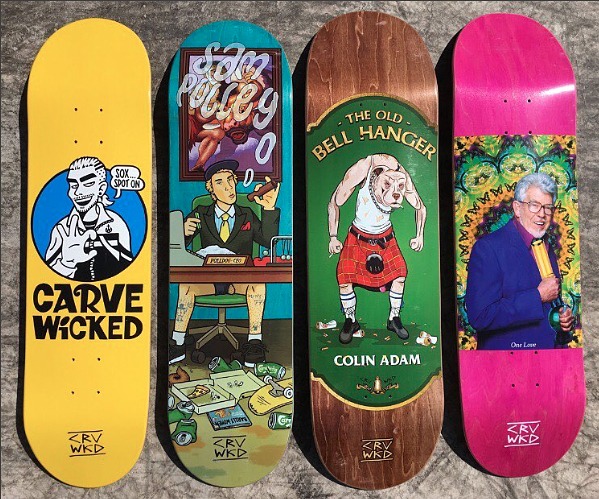 What are some of the economic and political benefits of skulling a shoe-ey?

Economically I’d say it’s the old case of two birds with one stone if you can walk around in something that can also be used as a liquid transportation vessel. Why keep producing glasses when there’s actually no need? It’s a waste of time, money and materials when you’re already wearing two glasses on your feet (providing you have two legs). As for the political side, I’m not really too sure, all I can say is that it’s nothing but positive.

Will pint glasses ever get replaced with shoes?

Not surprisingly it’s already catching on. Some bars in Argentina serve beer strictly in shoes only. I’ve also caught wind of a coffee shop up the road from my house with similar policies. So yes, I can definitely see this happening.

What’s next for the CRV?

Thanks to Pulley and all the mukkas involved! Skull a welly of champagne and toast the birth of the board division of CARVE WICKED. Tidy darts!