The run up to this year’s Pride Month saw Clown Skateboards and the LISA Project NYC putting their heads together to figure out an appropriate celebratory project; the result of which would be joining forces with none other than Brian Anderson, who was commissioned to paint a wall mural in Manhattan’s East Village. The artwork he created was then released on 100 hand pulled silkscreen boards, signed and available to purchase with the proceeds going towards the LISA Project’s initiatives. Given the chance to speak to BA, Clown’s Jeff Boardman and the LISA Project’s Wayne Rada, we fired some questions out to all concerned to get the lowdown on how it all came together. 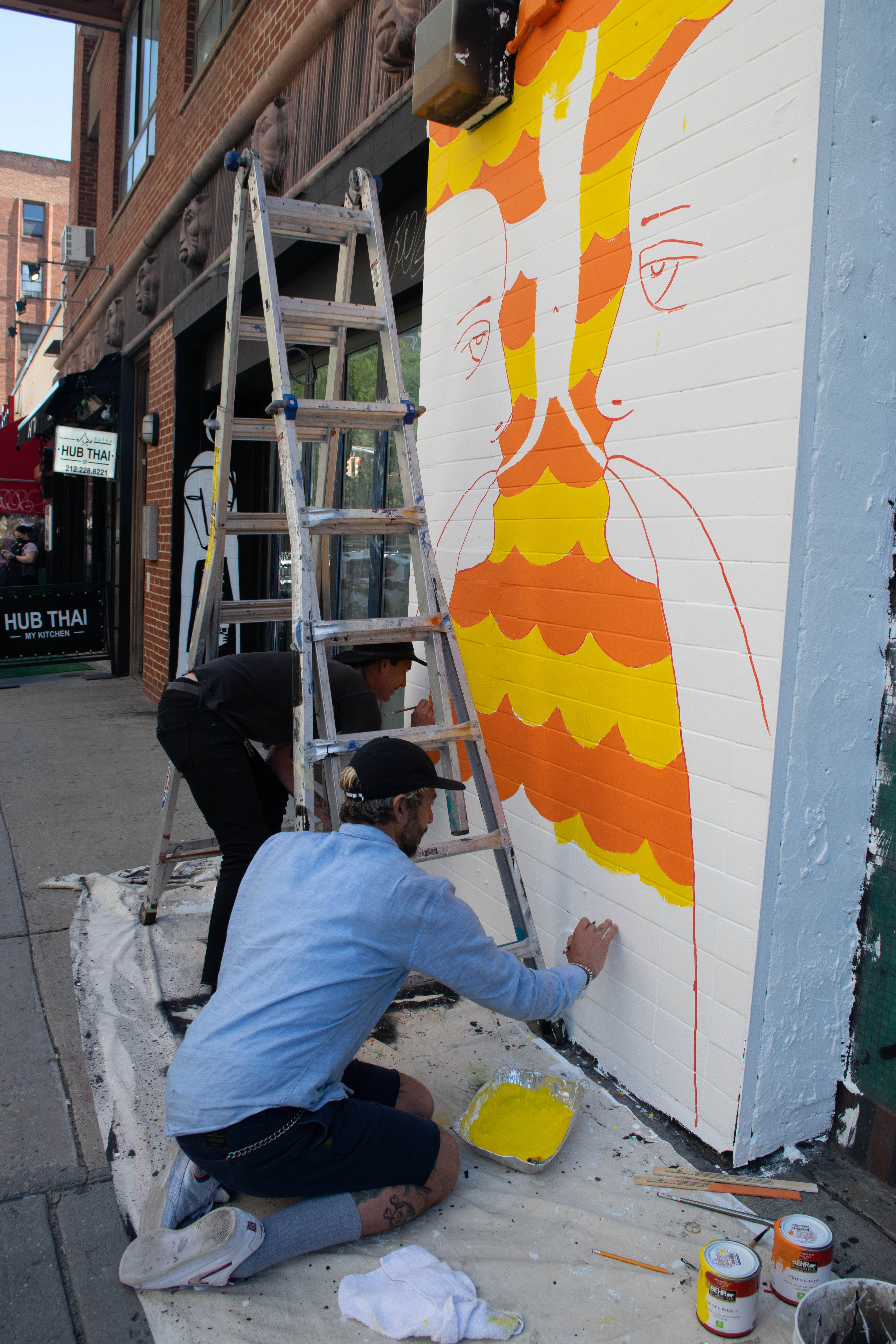 Last week, in the depths of a mid-shift dive down the internet rabbit hole, I found myself reading and re-reading a stumbled upon passage by American poet Mary Ruefle; “If you believe that metaphor is an event, and not just a literary term denoting comparison, then you must conclude that a certain philosophy arises: the philosophy that everything in the world is connected.” An extension, perhaps, of Miller pontificating over plates of shrimp in Repo Man (“It’s all part of a cosmic unconsciousness”), it also resonated with the project I was in the midst of piecing together an interview for. 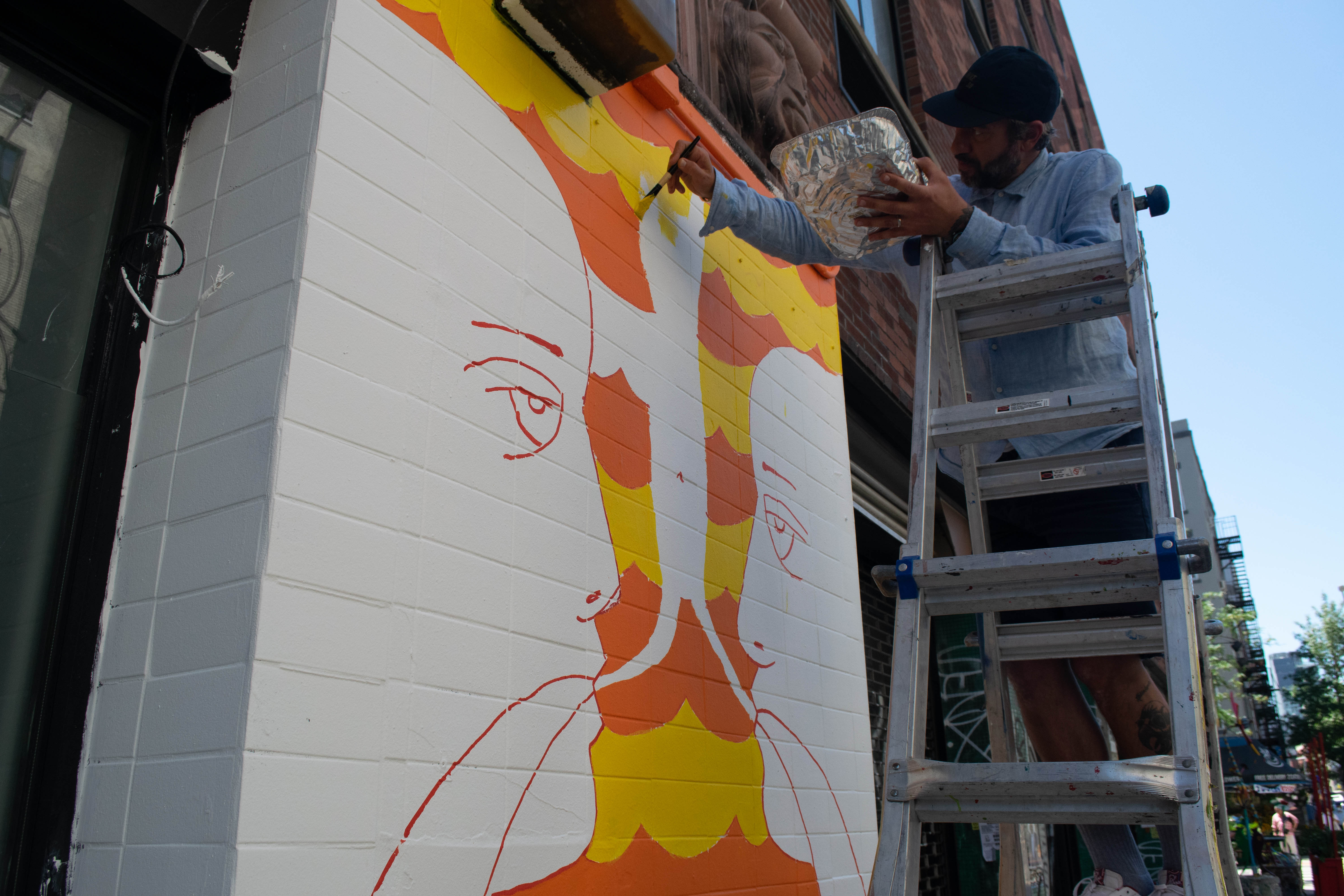 Deep amongst the urban sprawl of Manhattan’s East Village, not far from Tompkins Square Park and in an area famed for its artistic milieu, a mural depicts two faces in profile, facing each other and connected by a smaller figure made of flowing water which joins the two. The artwork is the first mural by professional skateboarder Brian Anderson, a collaboration with non-profit organisation The LISA Project NYC and recently reformed UK board heavyweights Clown Skateboards, planned to coincide with and celebrate Pride Month whilst offering a longer term celebration of the LGBTQIA+ community. Created in the depths of global pandemic, Anderson describes the image as showing “…two humans breathing together, representing the power of meditation and positive thinking. Even if a lot of folks can’t leave their town or city, we can still look up, dream, and create change.” The image is an undeniably calming one, the soothing blue figure which joins the two faces offering the potential for real human connection in an epoch which can seem on so many levels to be pushing us apart. 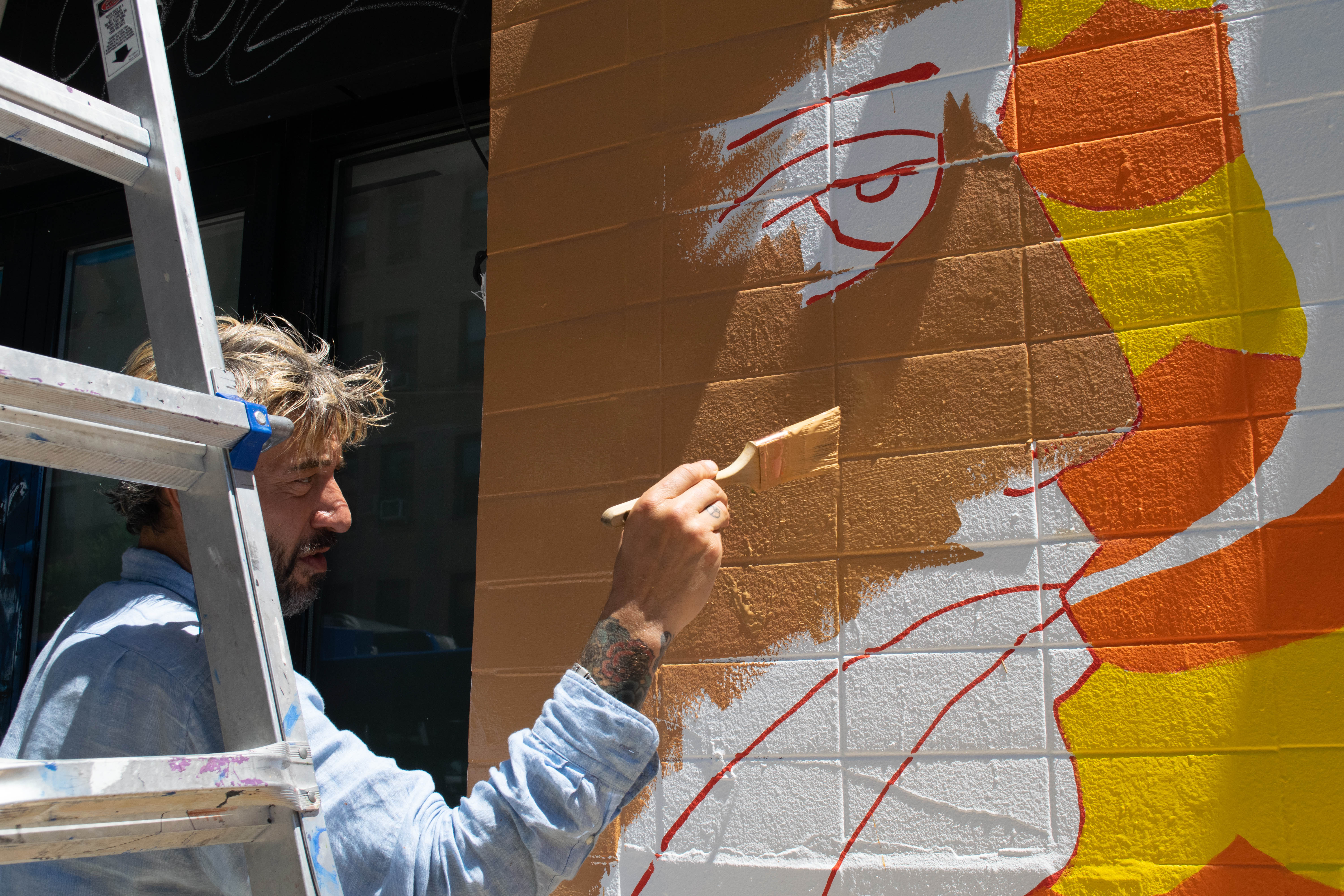 The collaboration came about in the first place semi-organically, the result of a mutual appreciation between all parties. Clown and The LISA Project are both heavily involved in social activism and as such were drawn to one another. Clown’s reformation (“We never stopped talking about it, and after 15 years, it had to be done,”) has seen the concurrent start up of Clown in Action, a programme dedicated to what co-founder Jeff Boardman sees as skateboarding’s fostering of an attitude of change; “…one that is not self-centered and focused on just making things better for us, but also for the people around us. The attitude is inclusive, supportive, encouraging, respectful, inviting, it cares about mental health, it can have an impact on our juniors, our seniors and everyone’s walk of life.” It is dedicated to assisting grassroots skateboarding and arts projects. 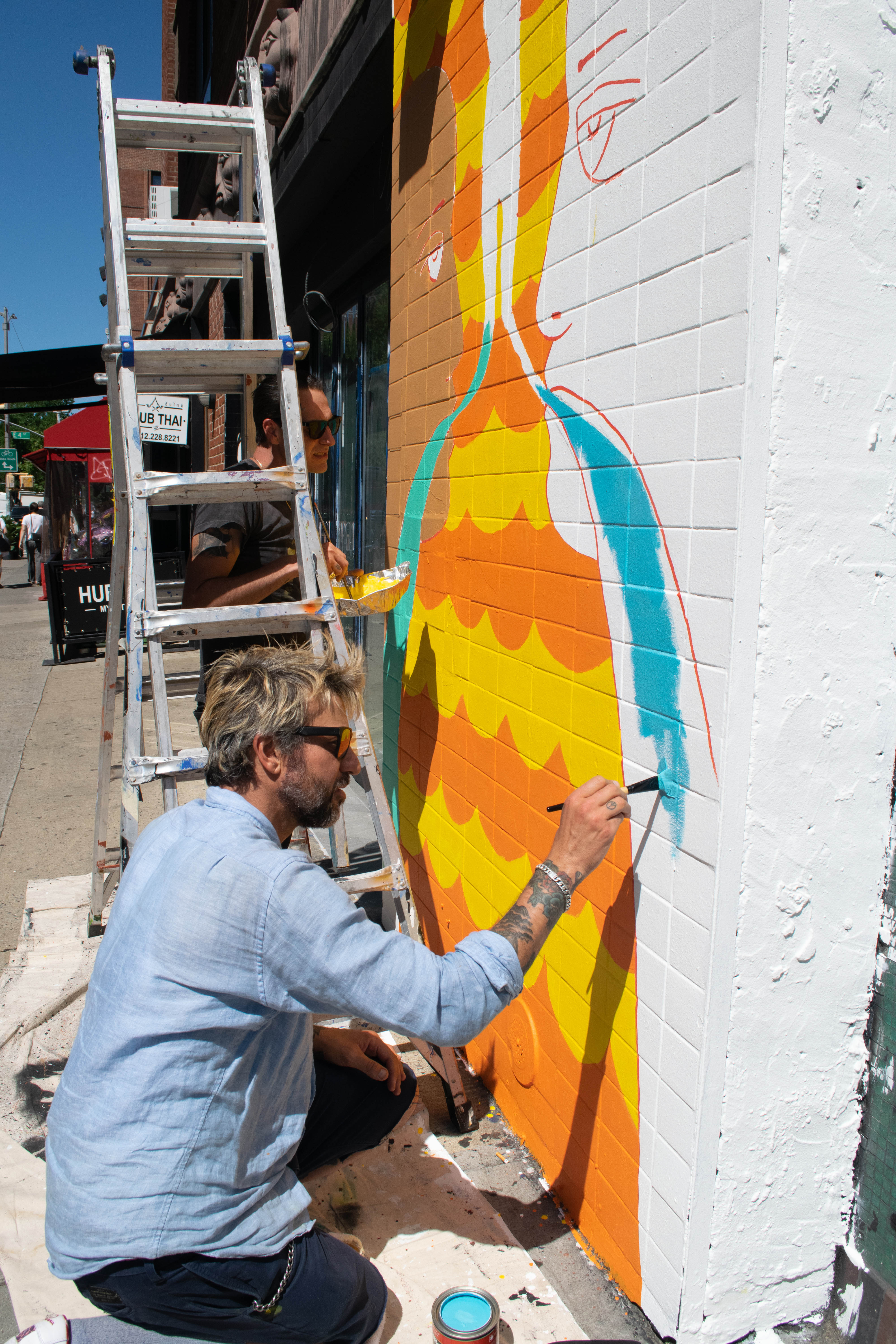 The LISA Project, or Little Italy Street Art Project NYC to give it its title in full, is a volunteer and community based public art charity, described by executive director and curator Wayne Rada as “at its core a beautification/mural arts program,” but one which has “evolved into a full service art program, with free art based events and giveaways.” Speaking via email, he muses that Jeff, “…like LISA, was committed to doing good in this world, helping kids and communities under served with art. It was a natural fit.” Jeff elaborates;

“Wayne and myself have been talking for ages about working together and finding a way to help raise funds and create some actions in NYC for under-privileged kids and communities. I really love the way that they take spaces, connect with artists and leave art, points of inspiration and messages about social issues around the city – this stuff gets seen.” 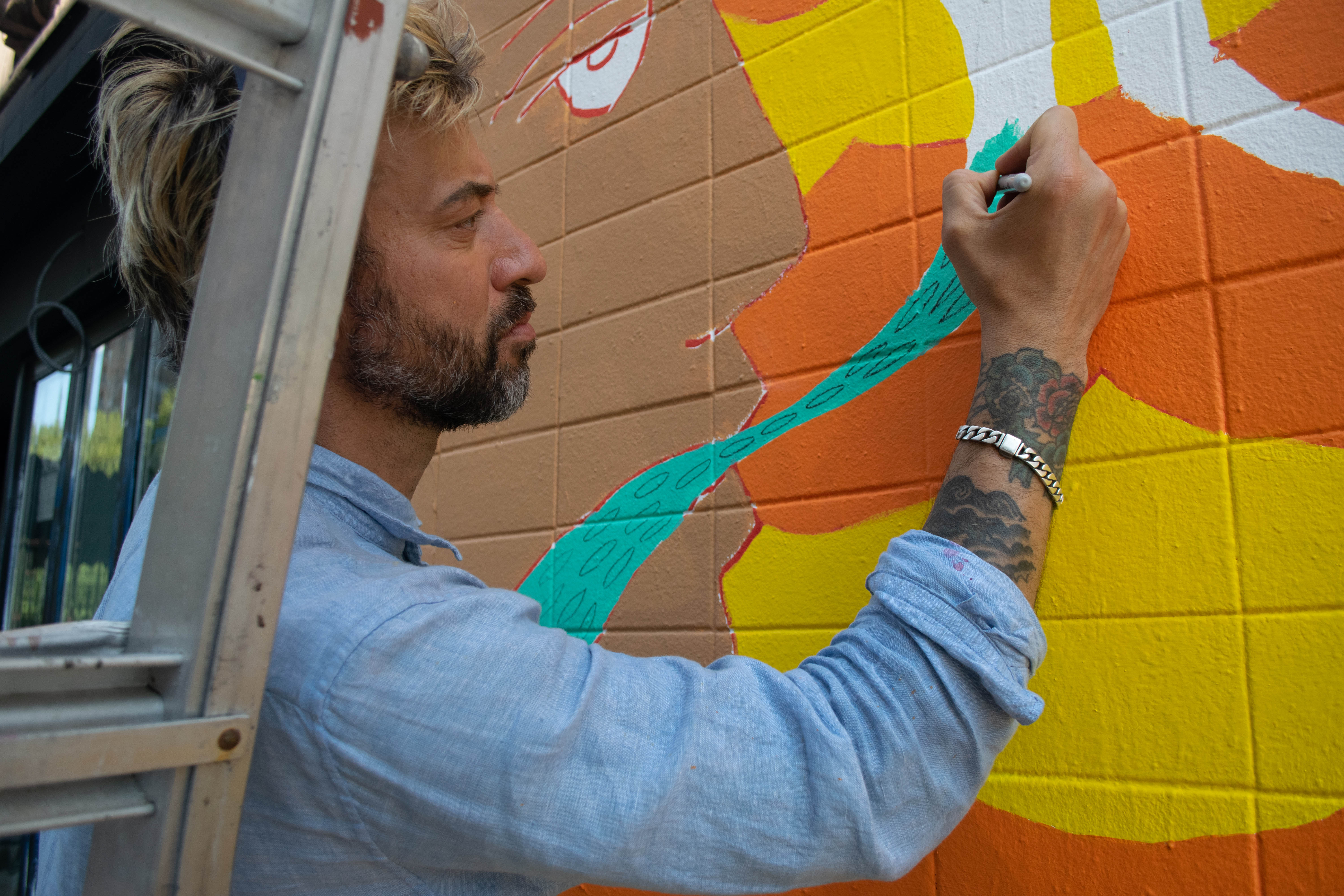 After Jeff had reached out to the project, work began on what such a collaboration may entail and it came about that Wayne had met Brian Anderson at his first pop up art installation a couple of years previously, with connections fostered through Cave Homo editor Luke Williams.

“When Jeff asked who we should choose to work with for our first collaboration, I suggested Brian for a LGBTQIA+ Pride board. He agreed immediately and Brian’s very first art board and fine art print came to life. Brian’s bravery in coming out a gay man in 2016, paired with his epic history as a pro skater, means you have a very special artist.”

Brian was similarly impressed by the work The LISA Project was doing, being quick to praise their work, “…with street artists combined with great foundations, charities, non profit and the continuation with the help of budget through collaborations, all to inspire people of all ages to create their art and stimulate daily life. To inspire change, kindness and be influenced by the streets and galaxy around us.” 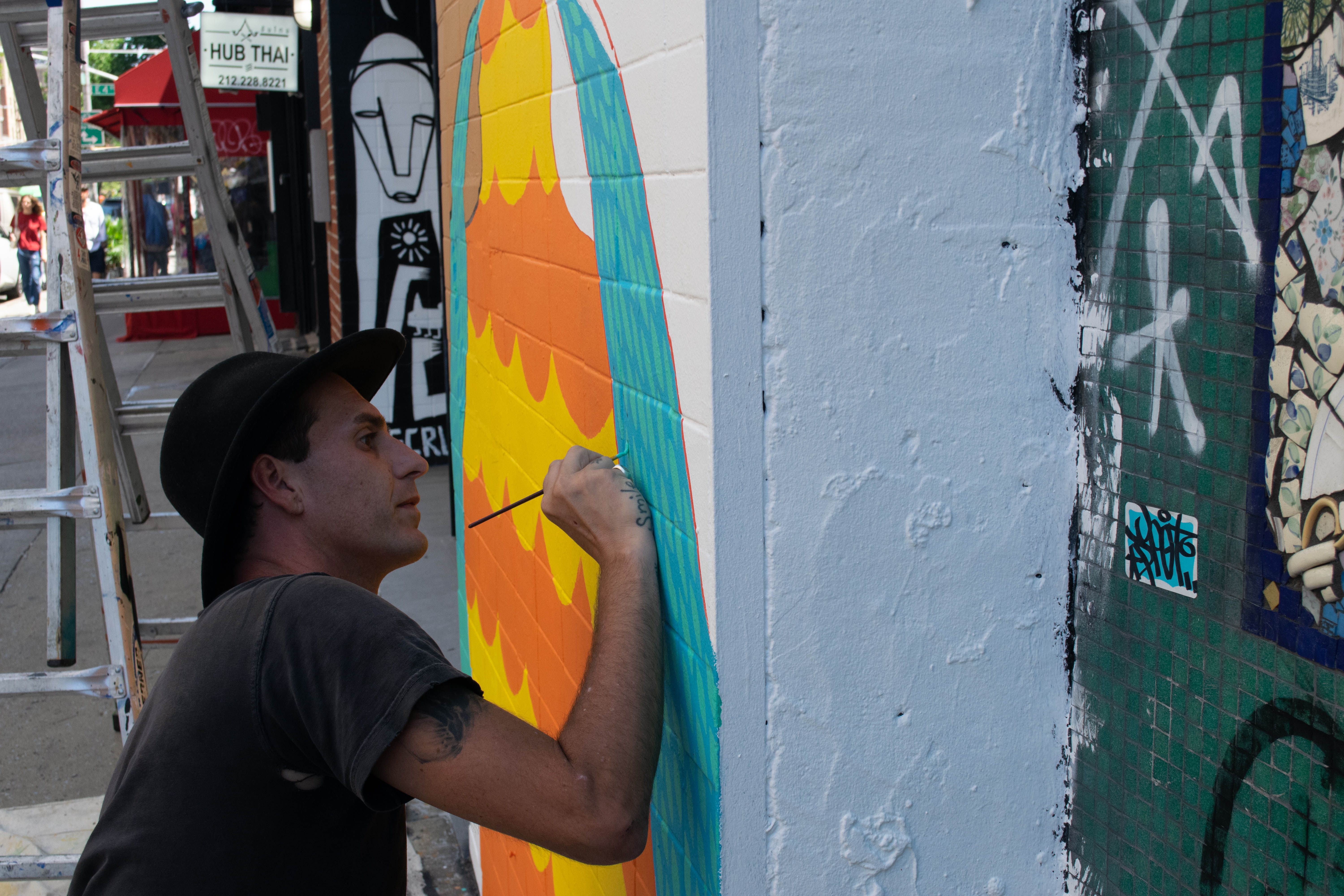 It is the first time the former SOTY has worked on an outdoor mural, a very different proposition to his current preferred medium of canvas;

“I use white pencil to draw my content, start with background colors of course, then spend time on the subjects, end with some detail and turn the painting around for a day. Then I sit across the room and stare with fresh eyes at the next area of canvas and what it’s needs are in regards to shade and or color.” This scaling up of mediums was, however, a welcome change, and “it was interesting to learn how to paint on bricks with seams between them, a nice challenge and experience.” His interest and immersion in art is one which stretches into his youth and is arguably in his genes, as his first exhibition featured his work alongside his father’s and grandfather’s;

“My father influenced me to paint lighthouses and boats. He often painted scenes from New England, where we grew up blue collar in an old whaling town. I always had a pencil, crayons and paper. I drew a lot of Hot Wheels cars because we couldn’t afford them, so I just drew them. Skateboarding provided me with spray paint and stickers. I decorated my school books with heavy metal band pictures and drew all the logos.” 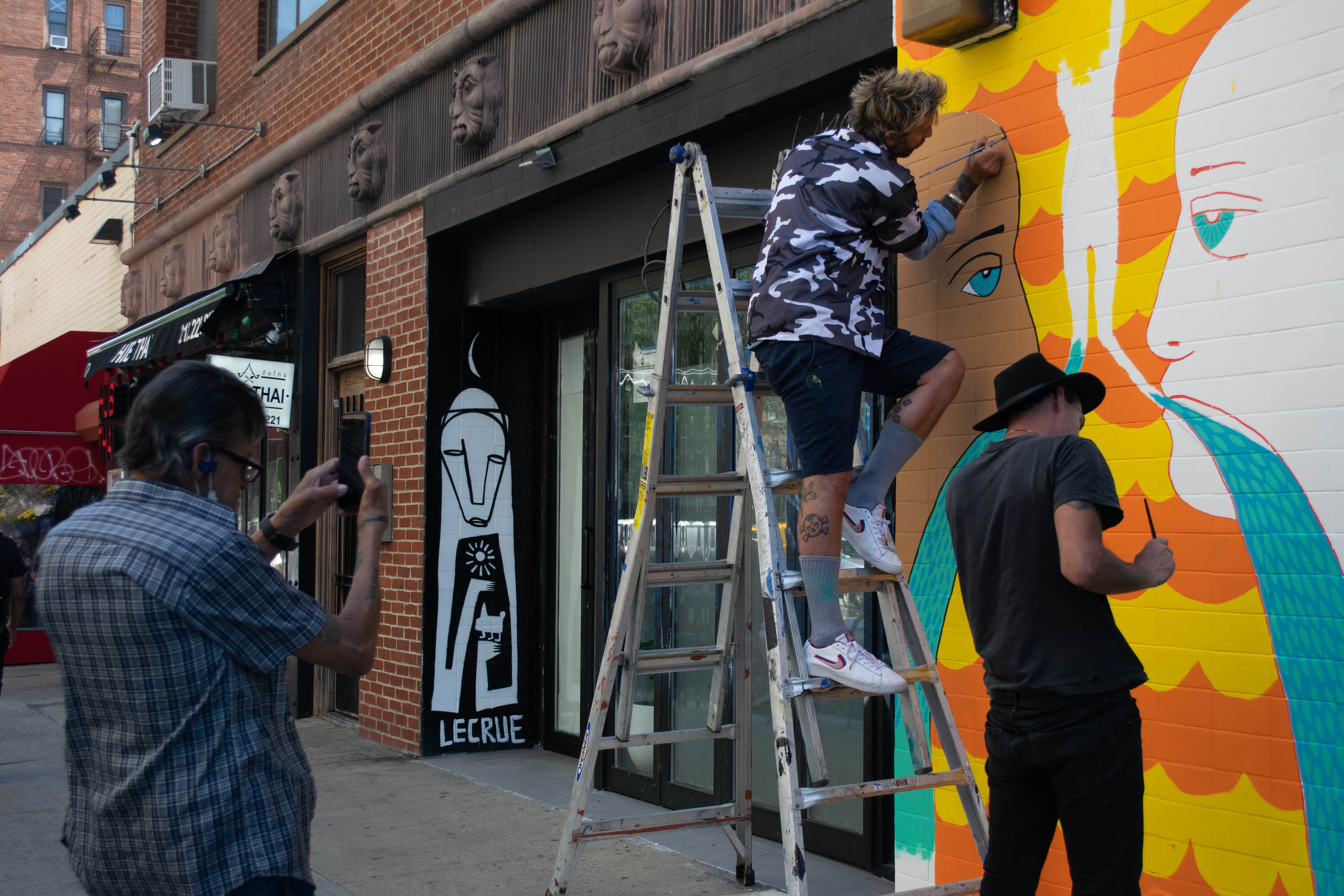 These early influences weren’t limited to the heavier side of things, with the schoolboy scribbling (“Van Halen, Twisted Sister, RATT, Dead Kennedys, Metallica”) taking place, “while listening to Madonna and the Stray Cats and being a breakdancer. All those genres influenced my whole everything. I painted in high school art class a bit, toured the world for 25 years with a sketchbook, now I’m painting again.”

Alongside the mural, his artwork will also be shown on a limited run of 100 hand-pulled silkscreen boards, signed by the artist and with proceeds going towards The LISA Project. I ask LISA’s Wayne where he sees skateboarding’s place in the urban milieu; art, sport, what Zane Timpson called in a recent interview with Confusion Magazine, “a vicious ballet”?

“To me the art form of skateboarding is more of a high wire or trapeze act, with death defying tricks performed in a graceful manner creating those ‘wow’ moments. A vicious ballet? Perhaps in the past. Now I see skaters as ambassadors of change – kick ass, thrashing, ambassadors of change!” 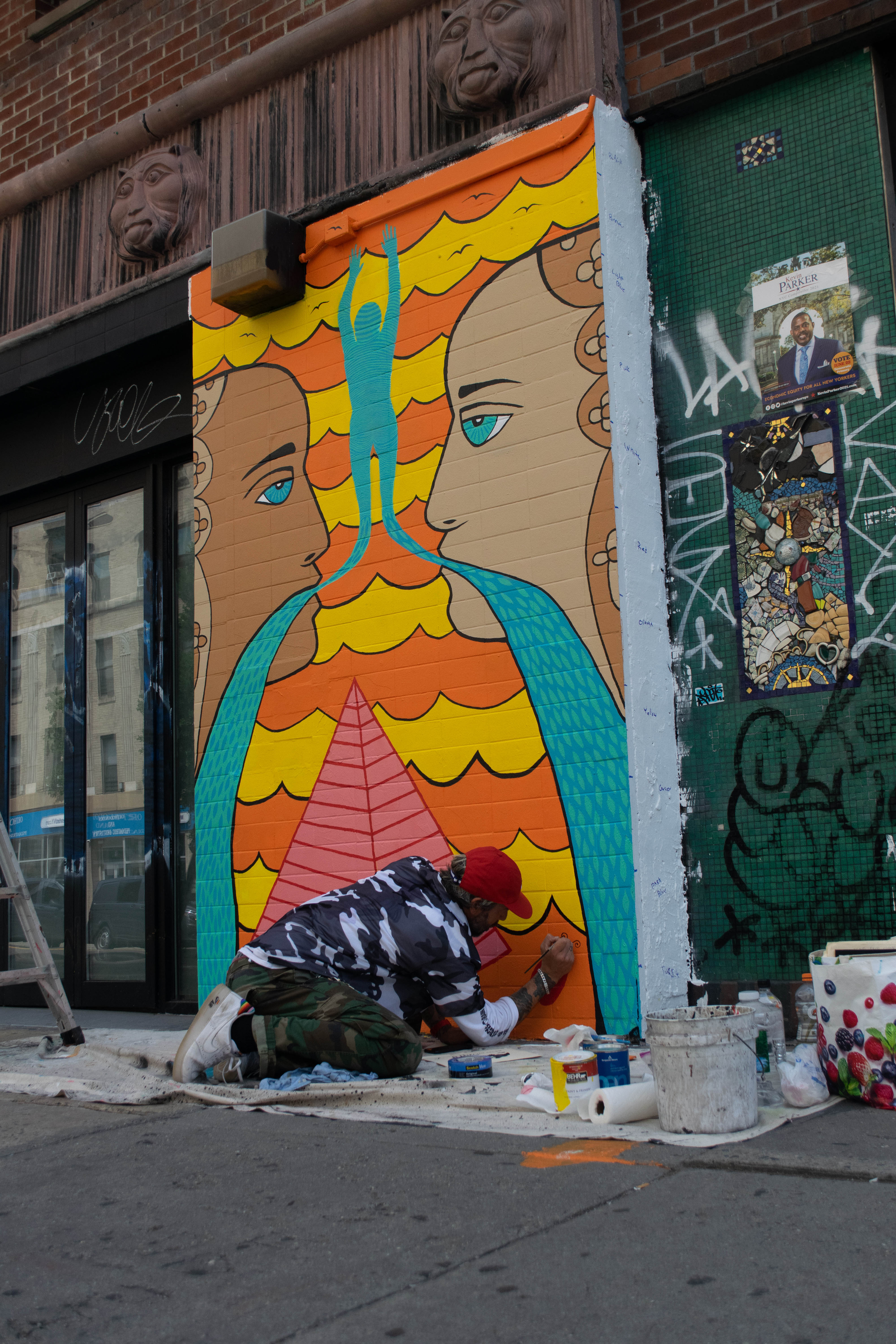 That change is embodied in the work Clown in Action are currently doing, with an aim “…to champion that attitude and help out as much as we can, and to be part of that community that gives a shit and wants to take it wider.”

With the three entities joined by what Jeff calls “a common DNA between us around art and community,” I am intrigued to know what comes next now this project is up and running. Brian’s plans involve a lot more painting, “experimenting with landscape & psychedelia,” as well as a book which was first discussed in an interview with Skateism early last year and is coming to fruition as planned;

“I’m combing through all my sketchbooks, I’m speaking with my mother a lot about raising myself and 13 siblings. I write old memories down constantly and I am making a fake book from cardboard so I can hold and really will it to take shape, so I can feel what chapters should live where and what they are made of. It’s exciting and healing so far.” 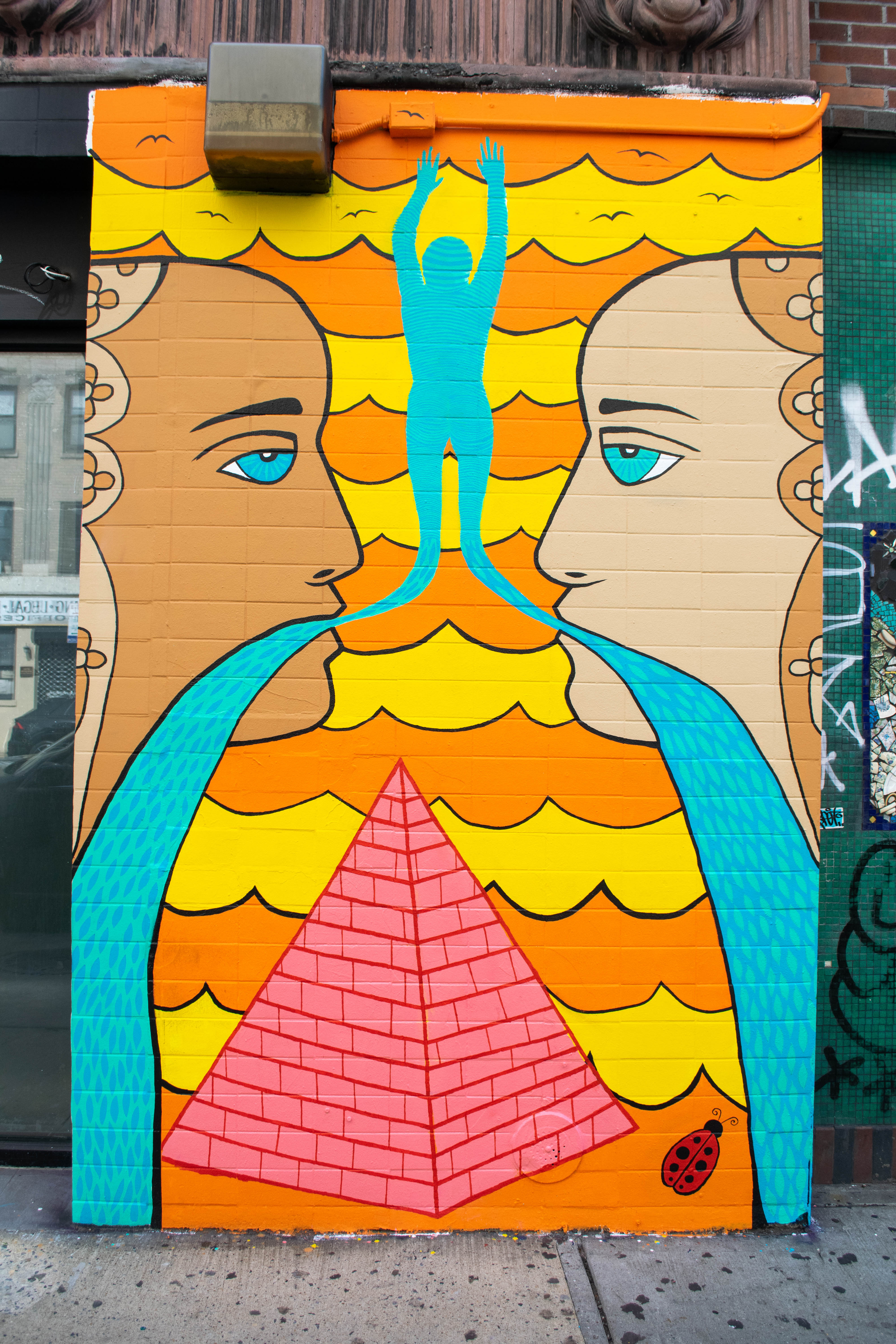 Clown in Action have some more collaborations in the pipeline, to be revealed in the near future, alongside continuing their work with LISA with a skate and art workshop for the younger LGBTQIA+ community in NYC. There are also plans with the Make A Wish Foundation, and more attempts to utilise skateboarding as a positive tool for change;

“We just need to get more people in, more people helping, and then social change will happen and take on that attitude with luck. We are a small part of this, there are so many people doing the above and it’s absolutely amazing to see.” 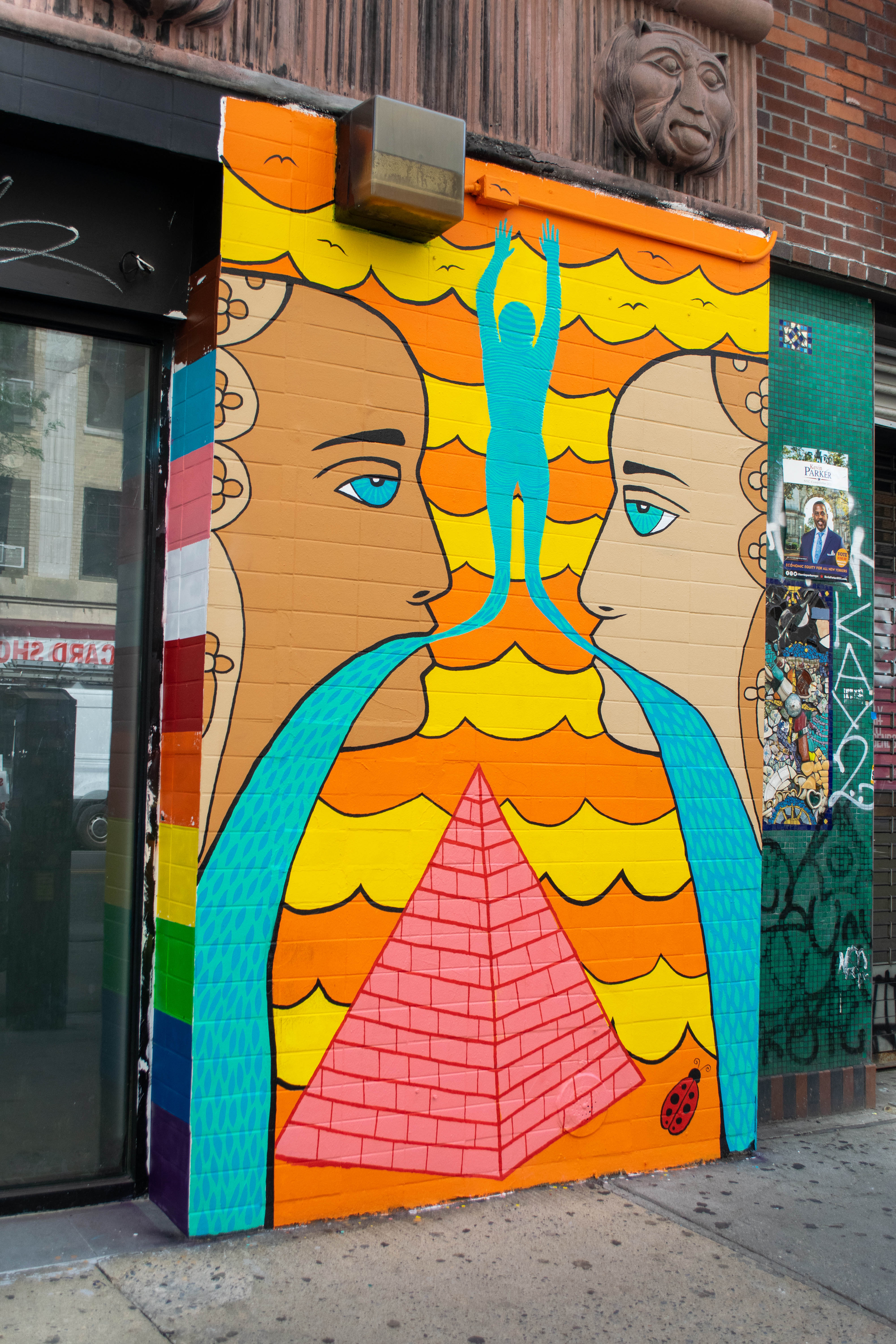 Wayne offers a similar viewpoint when questioned on his view of what skateboarding, and skateboarders, can accomplish from a wider societal perspective;

“The skate community has become a place of inclusion. It wasn’t always that way, but people like Brian Anderson and Jeff Boardman are those social change engines and the skate community has become a beacon for kids and adults of all walks of life to come together. By coming together the community in general now rejects all forms of hate. Skate don’t hate! Something to think about, how are you helping to make the world a better place for yourself and your neighbors?” 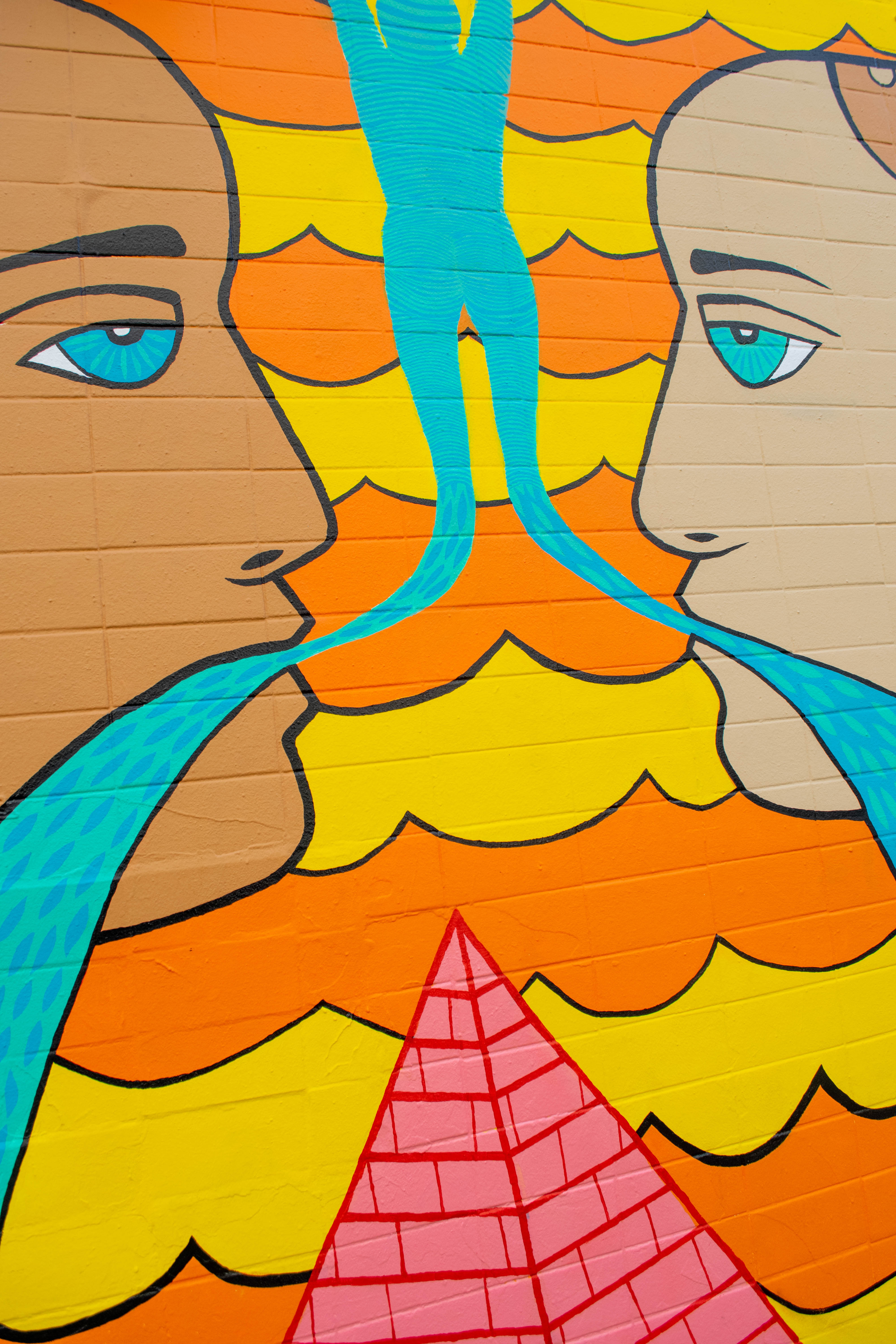 Brian Anderson gets the Isolation station treatment from Jacob Sawyer for Slam City.