A new skate / art / music based event kicked off over the weekend in Wakefield at The Ridings Shopping Centre (those flats on the DVD cover of  Yorkshire full length video Baghead Flats) in association with All Saints Yard and The Arts House UK. Featuring shredding from the likes of Aiden Blaymire, Blinky, Paul ‘Wapo’ Watson, Victor Mputu, John Sykes, Liam Sproat, Lee Rozee, Ben Moulson and more. Scroll below for some words + a clip by Ben Powell and photos by Tim Smith.

Rarely a day goes by without hearing the media tolling the death knell for the British high street. Empty units, the dissolution of once powerful stores and an infestation of cheap off-licences and betting shops are a blight on our collective urban landscape that only the most myopic will be unaware of. My own hometown of Wakefield has suffered this slow decline too, with a huge proportion of it’s once buzzing high street slowly disintegrating before our eyes. 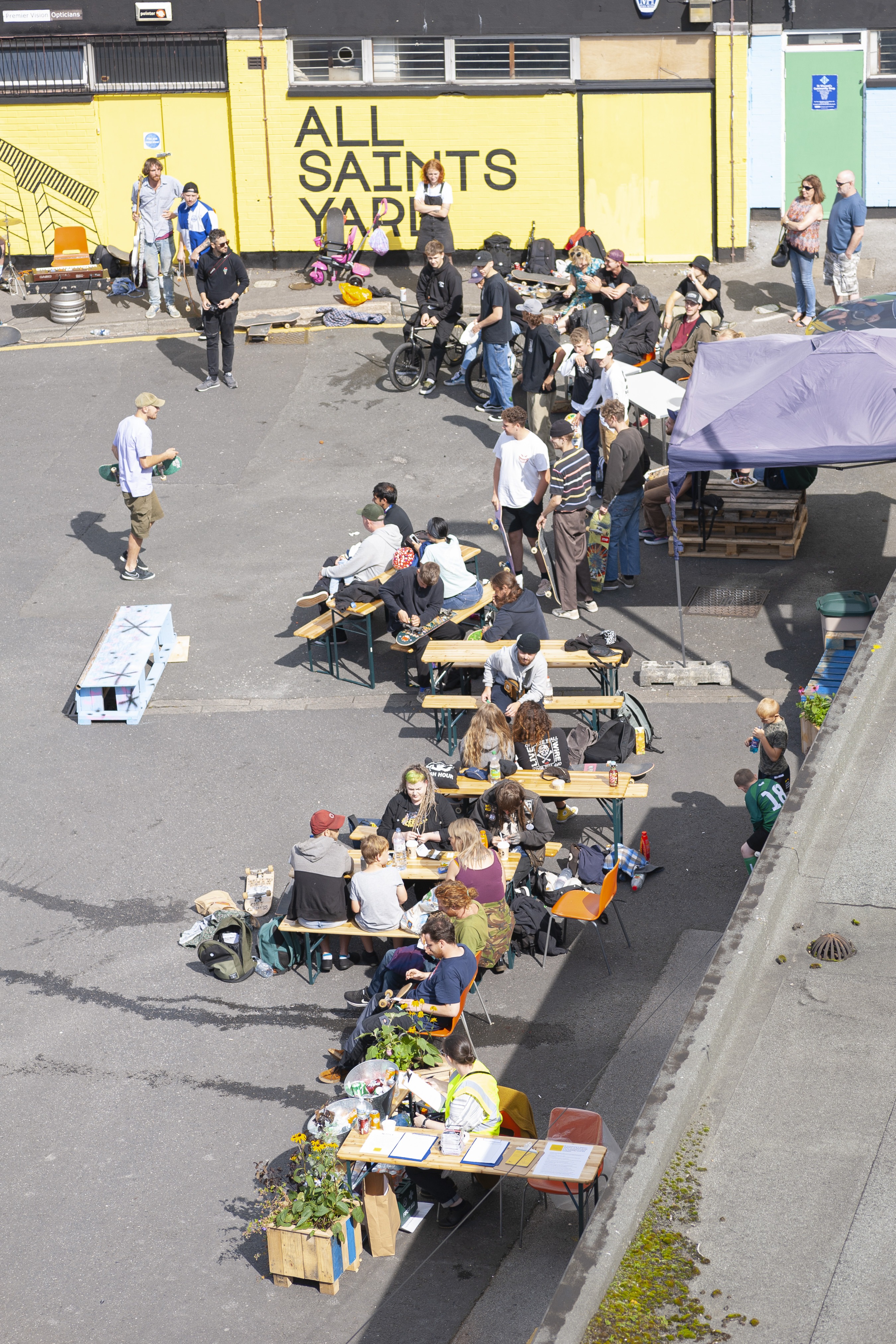 Happily though, this past Saturday saw a concerted effort to breathe a little energy into this torpor through a collaboration between Wakey’s art scene and the once mighty Ridings Shopping Centre. 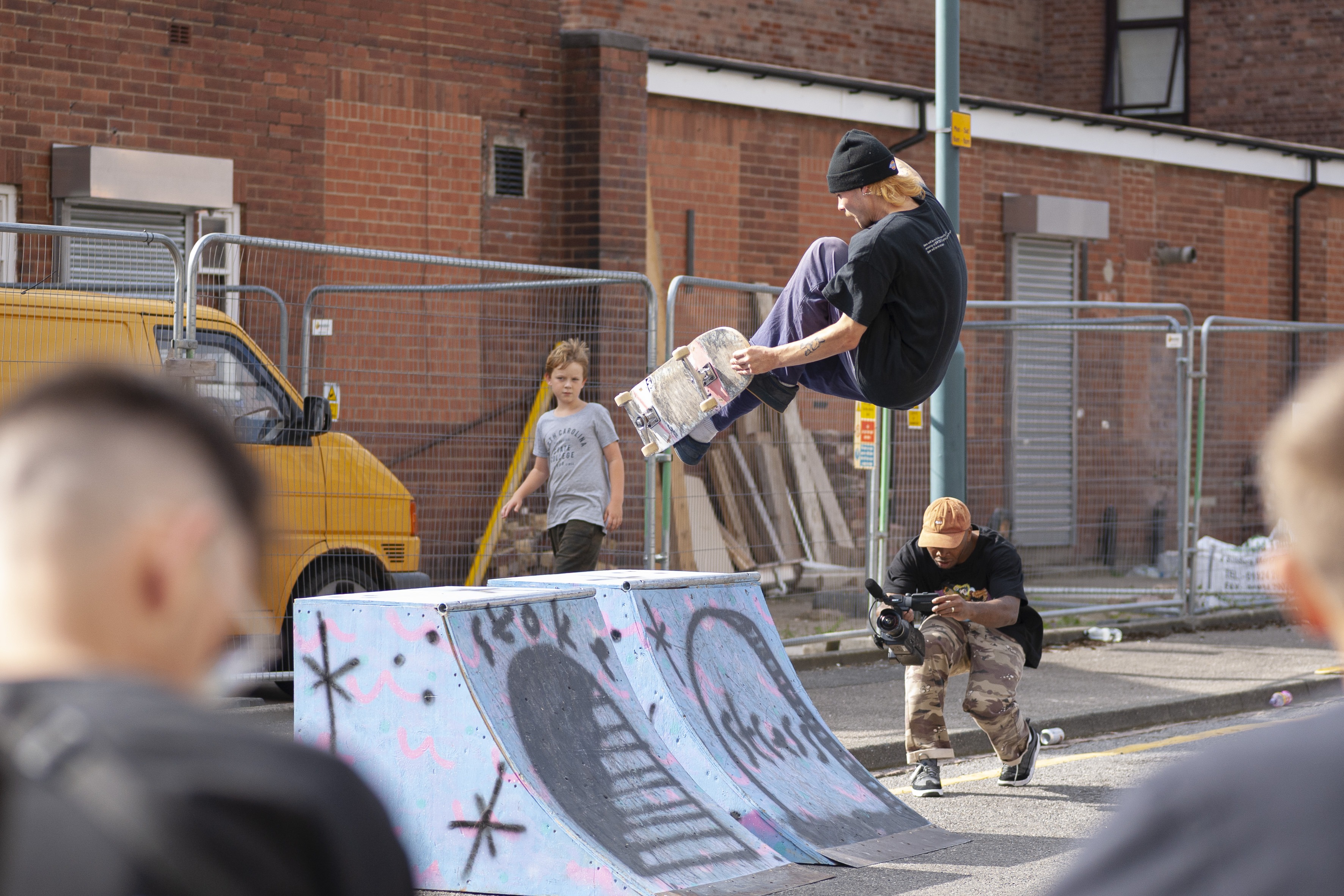 With the local Art House institution taking the reigns of a long-dead space around the back of the city’s original shopping centre and transforming it in a colourful space known as All Saints Yard, the various tentacles of the city’s underground cultural scene now have a spot and the support to put on small-scale, locally-focused events aimed at reminding people that they can still make a little noise of their own in their city. 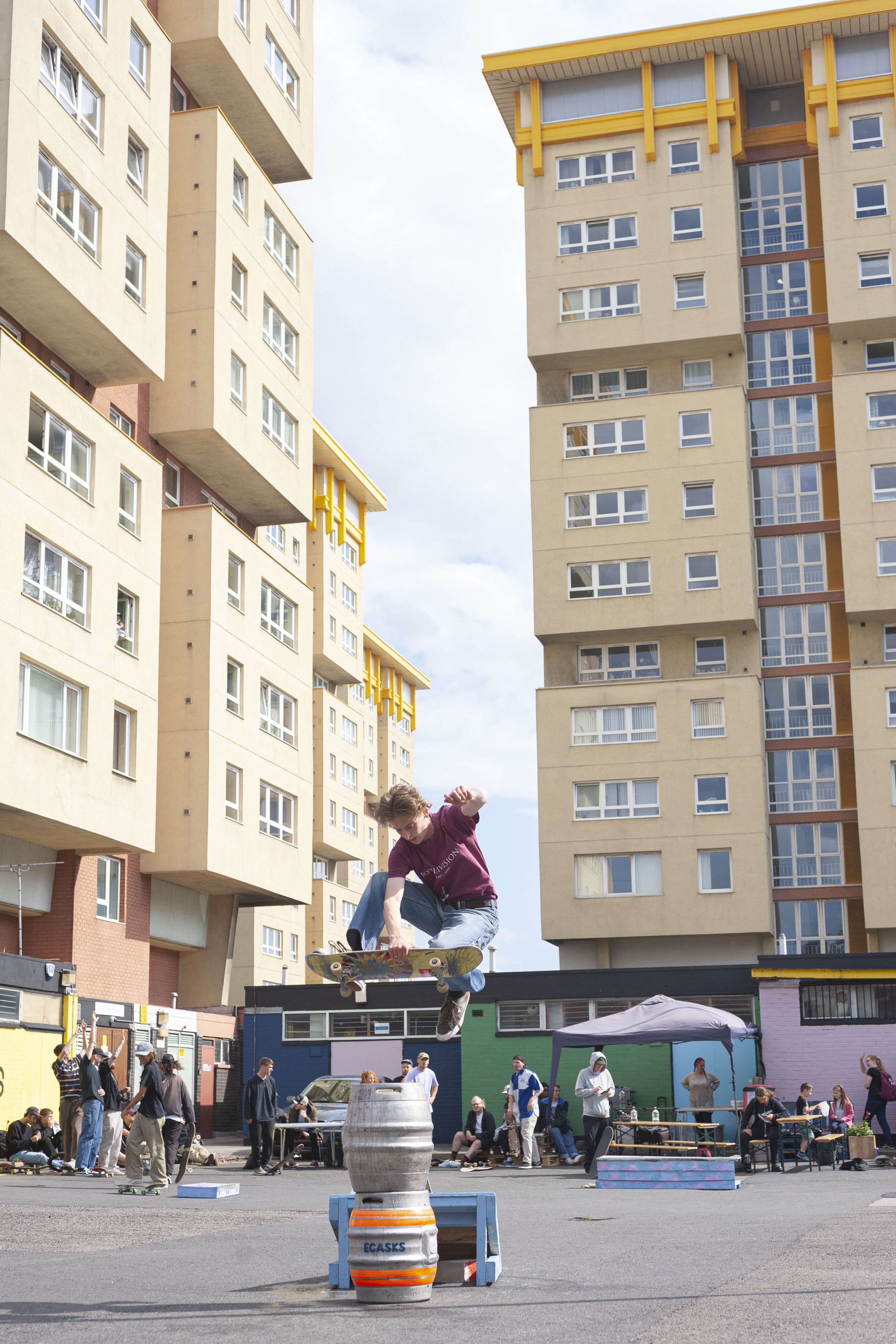 All Saints Yard officially opened earlier this Summer and after an inaugural event hosting local artists, musicians, chefs and the like, the people in charge reached out to the skateboard scene to create a little happening of their own. 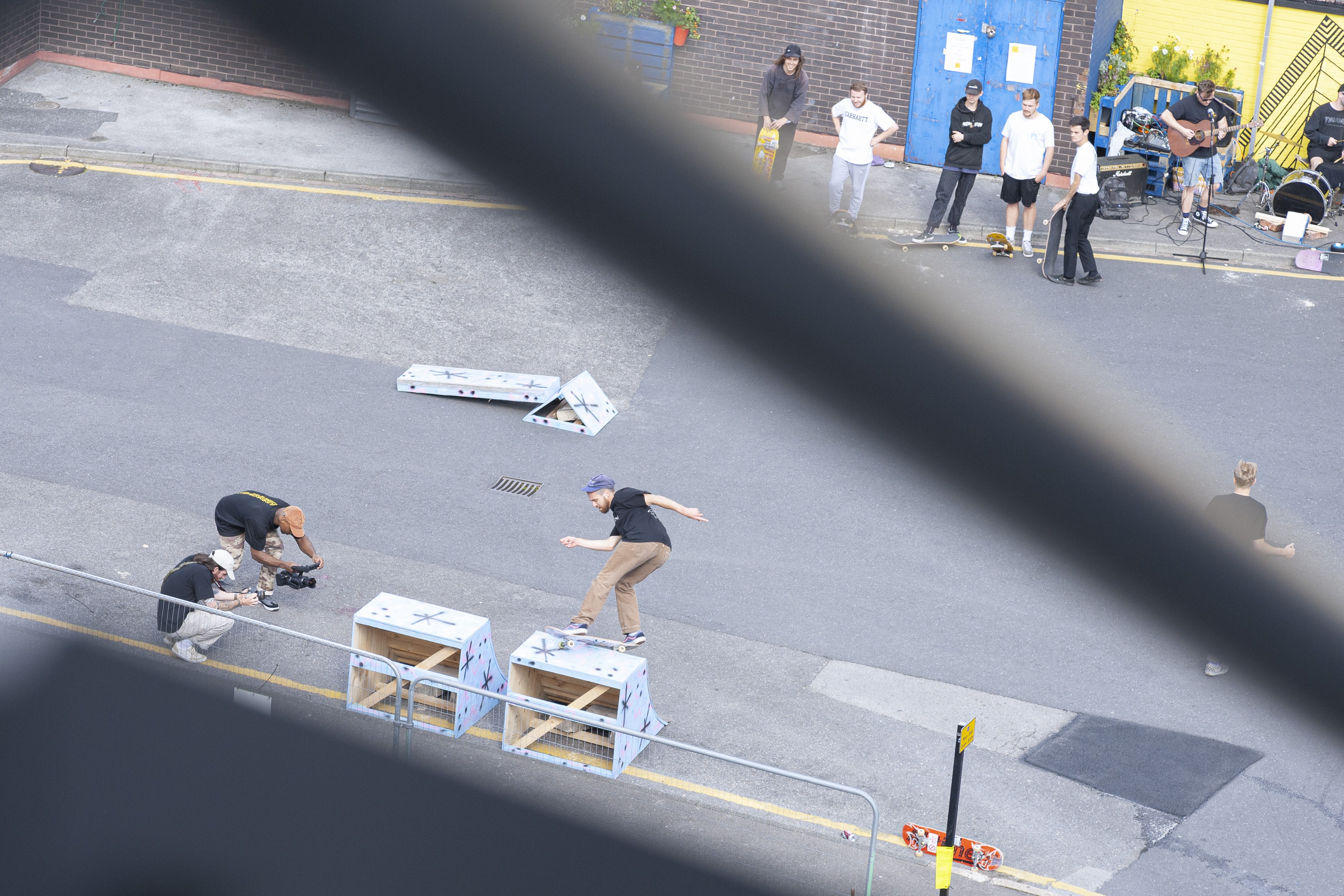 Fittingly situated beneath the imposing high rise flats that dominate Wakefield’s skyline, (made somewhat famous within skateboarding by the Baghead Flats video), August 17th saw the first collaboration and drew skaters from all over West Yorkshire to skate a selection of obstacles funded by the Art House and built by local heads Aiden Blaymire and Paul ‘Wapo’ Watson. 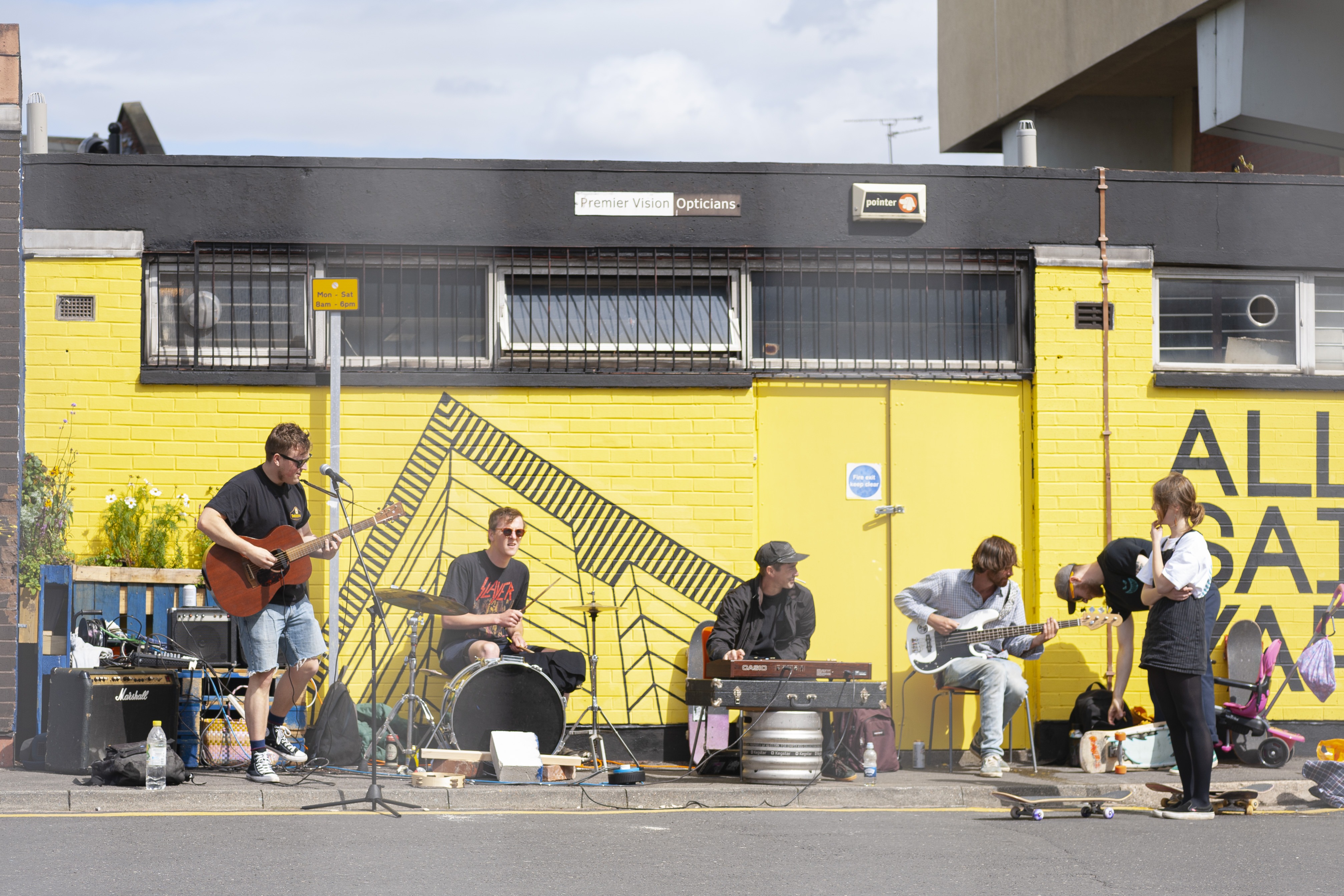 The resulting jam saw an afternoon of shralping, live music, (courtesy of the multi-talented Charlie Padfield, street food, street art and general merriment. From a personal perspective, it was truly inspiring to see this coming together of disparate forces with the sole aim of reinvigorating a long dead part of town that is generally used for nothing more exciting than street drinking and illegal parking. 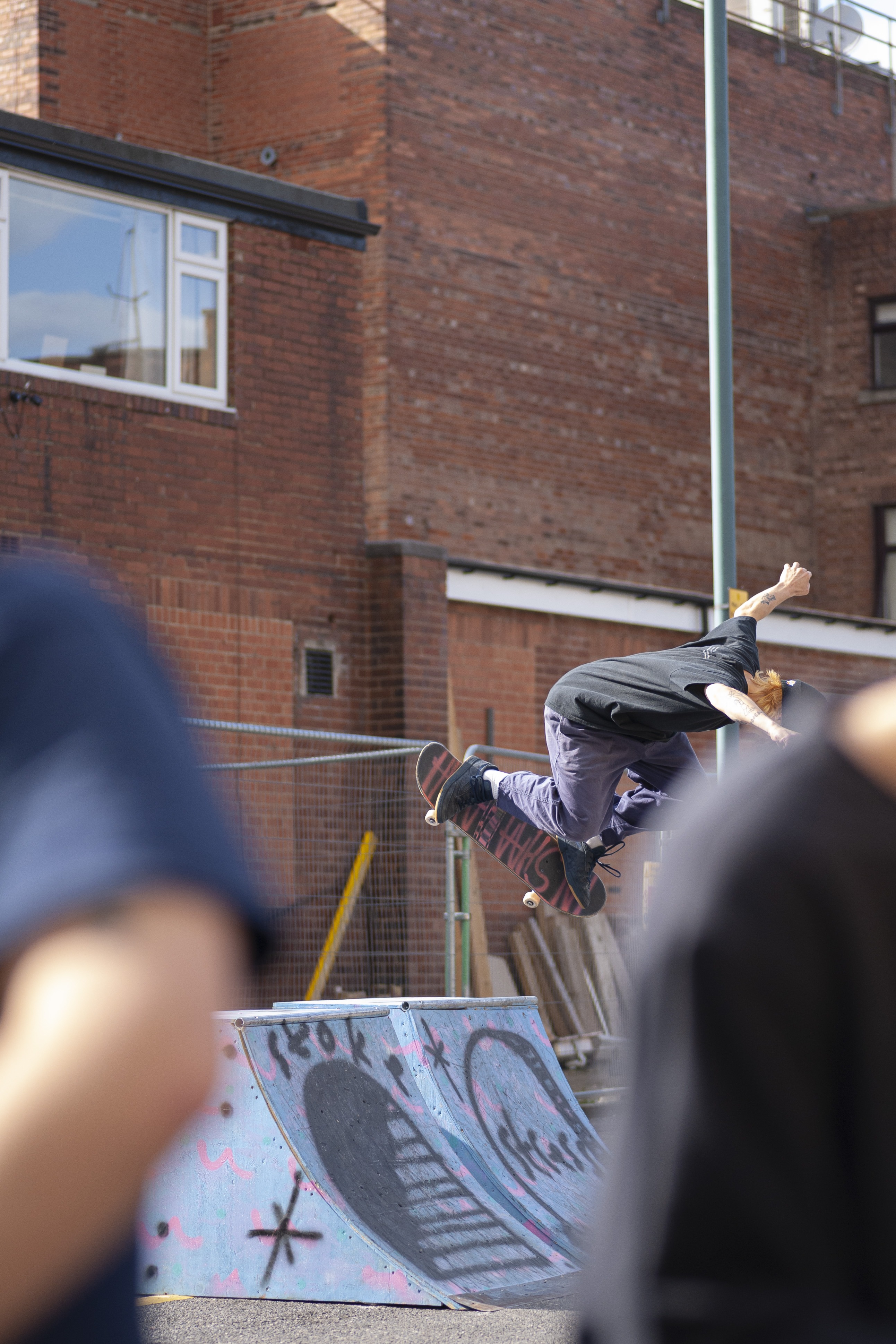 Equally, it’s also life-affirming to know that the maxim of ‘if you build it they will come’ still applies in the skateboard community and that with a tiny amount of funding, any old carpark can be transformed into something special, albeit temporarily. 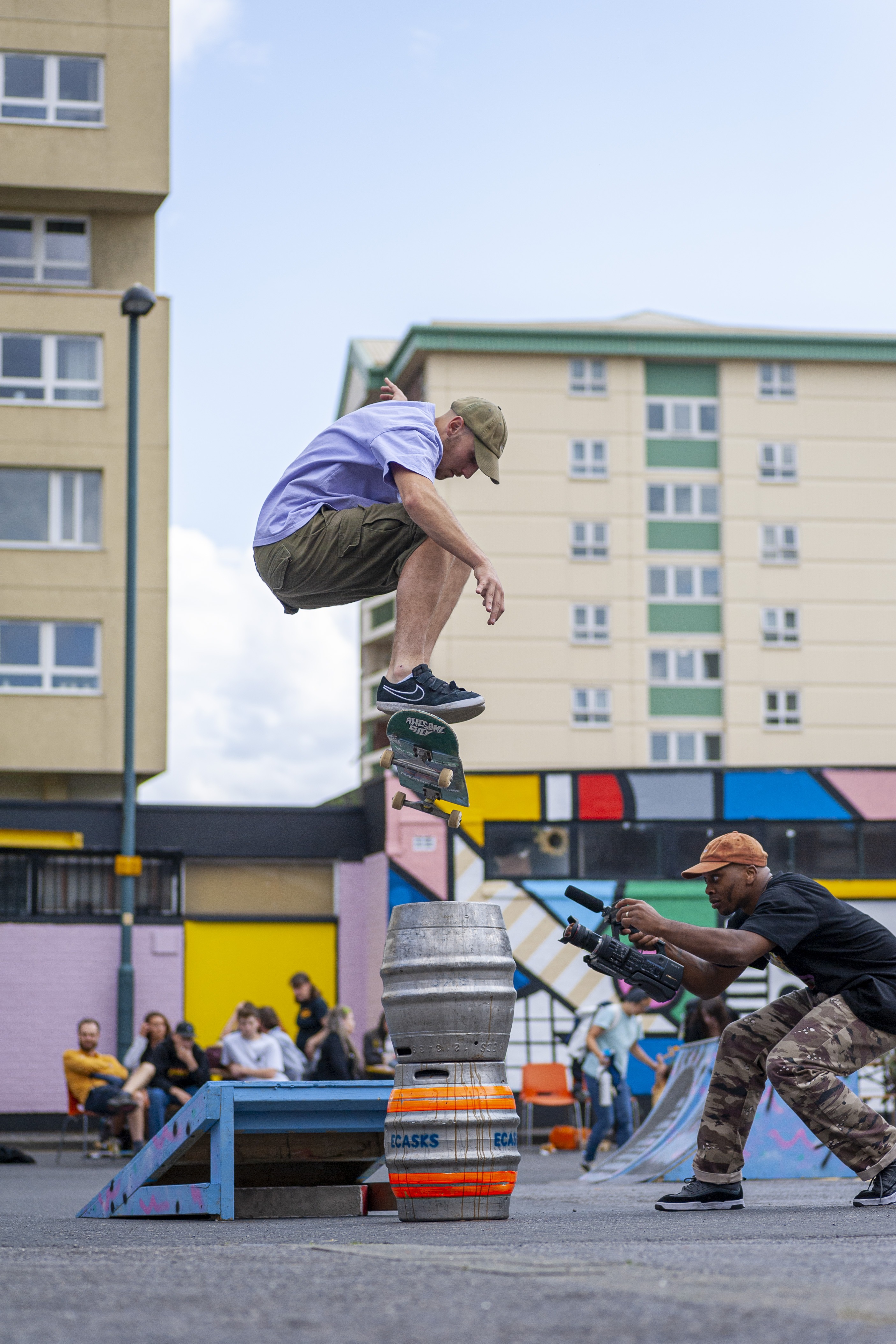 People turned up, ripped the obstacles all day, ate, drank, played music and generally had a great time. There are plans to do more of the same thing soon, so if you fancy getting involved – give @allsaintsyard a follow on Instagram and get in touch going forwards – everyone is welcome. 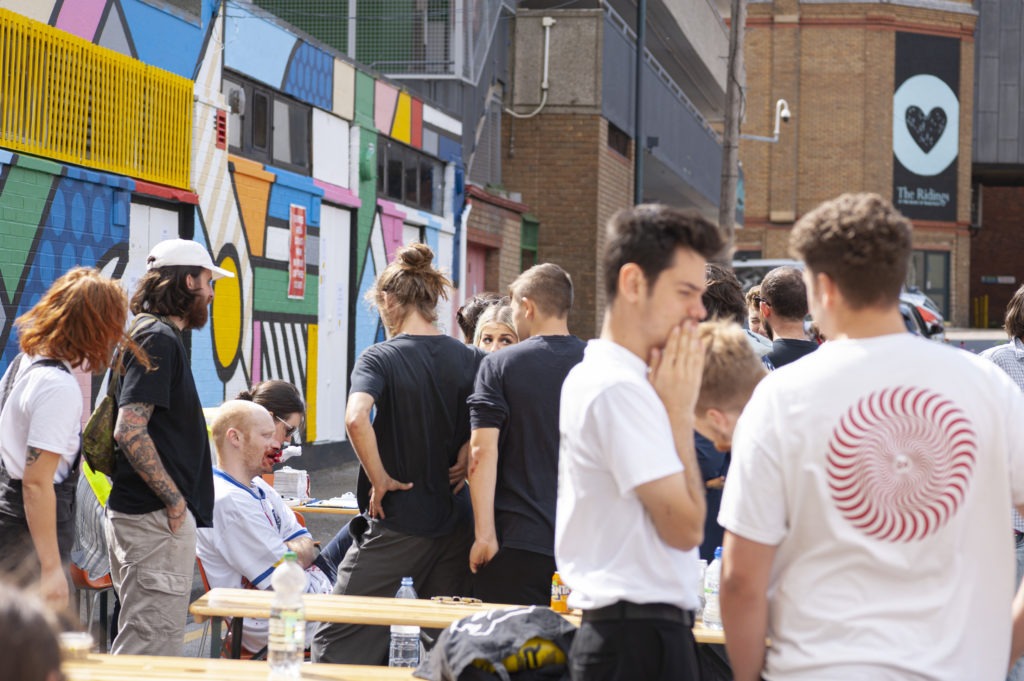 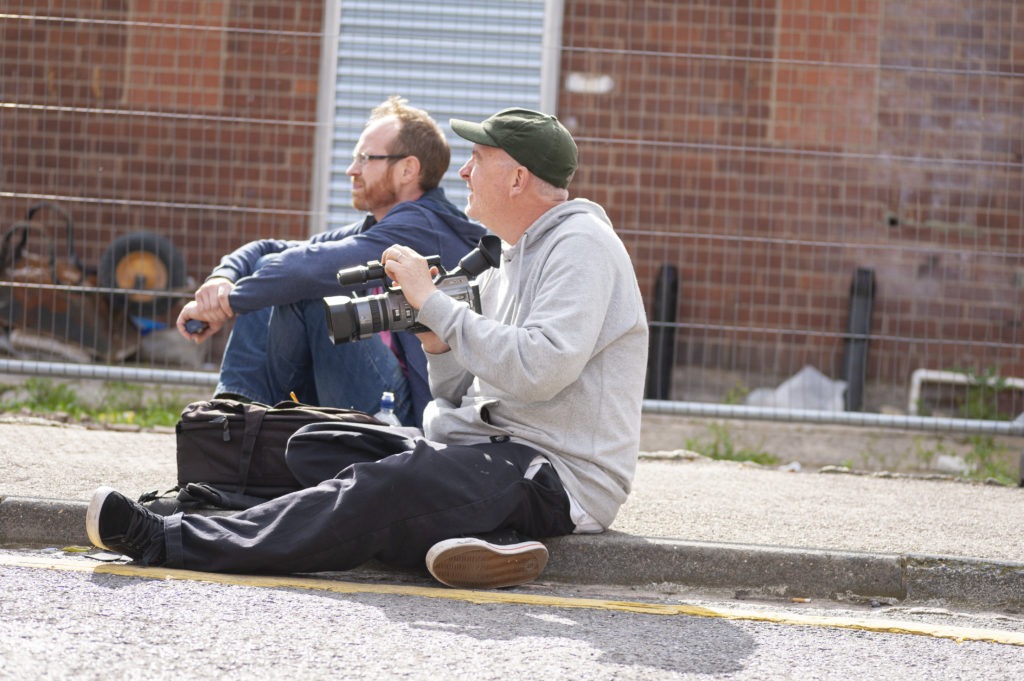 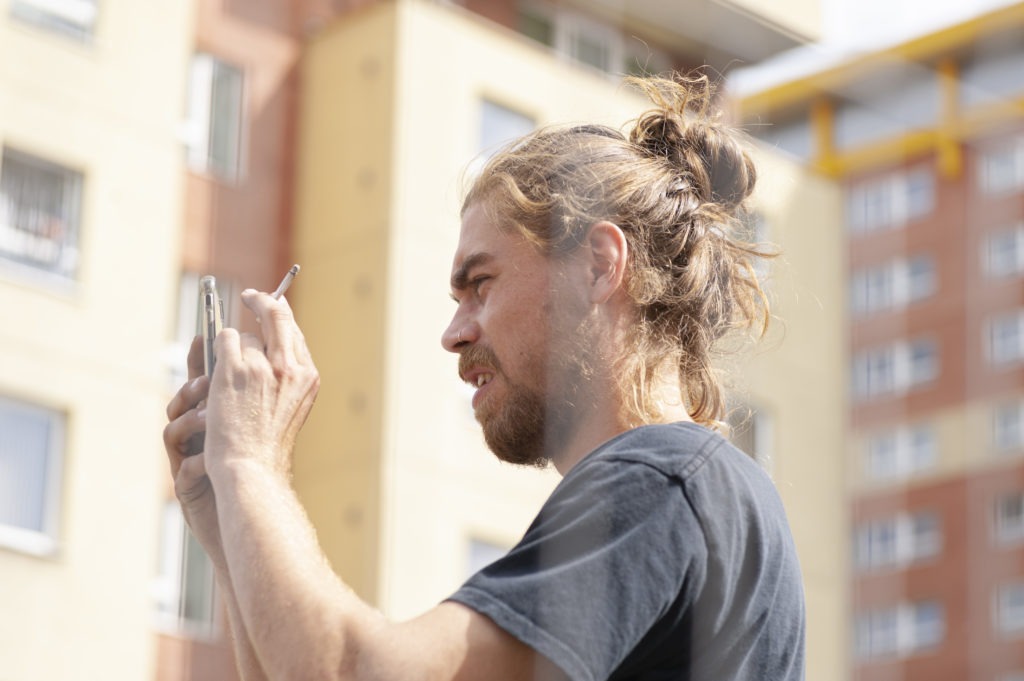 Big thanks go out to all the people at The Art House Wakefield, the All Saints Yard crew, The Ridings and the collective force that is the Wakefield Underground. 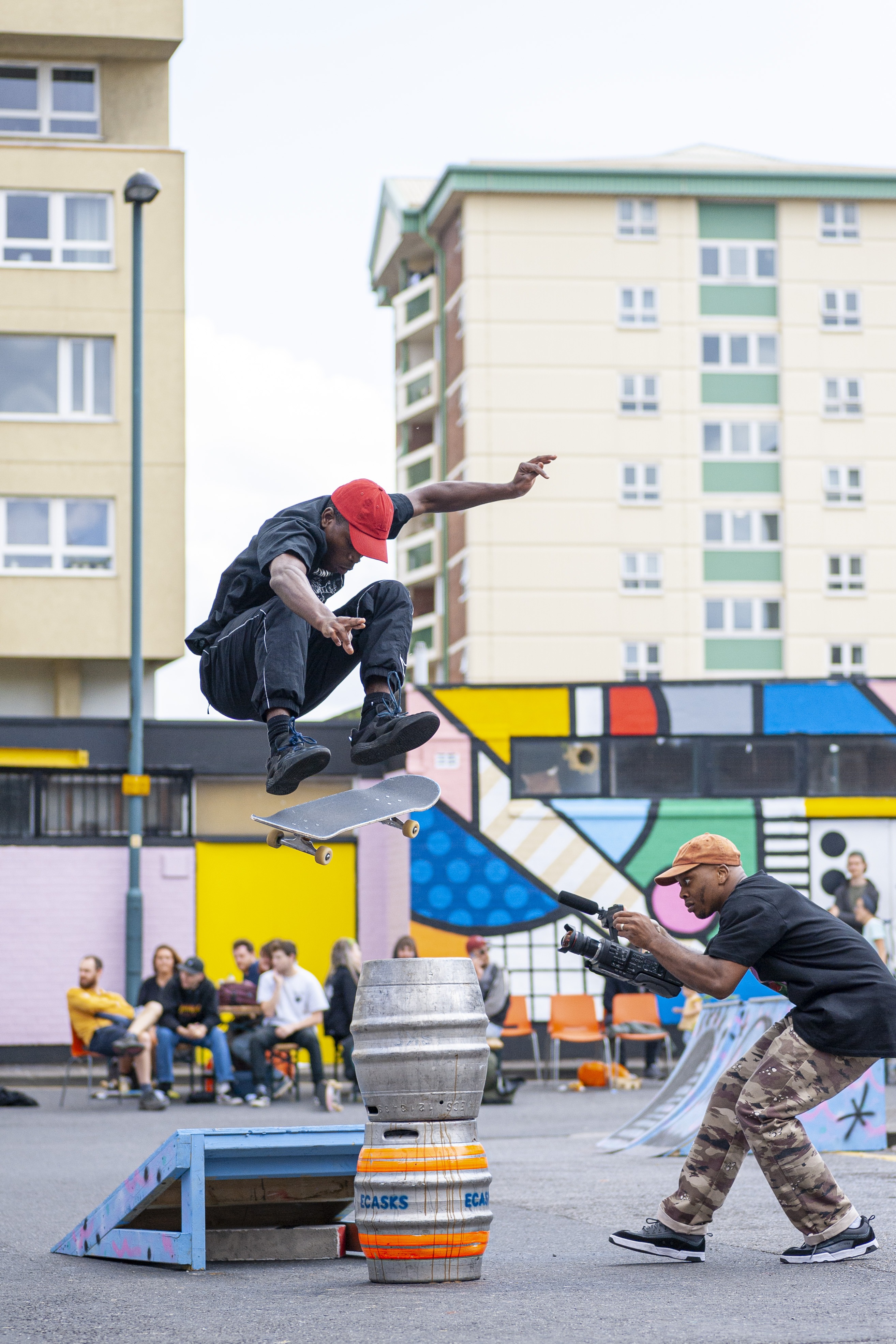 If nothing else, the event was a salutary reminder that you can have a positive influence on your local area, all it takes is a little networking and a preparedness to get involved. Go hold your own! 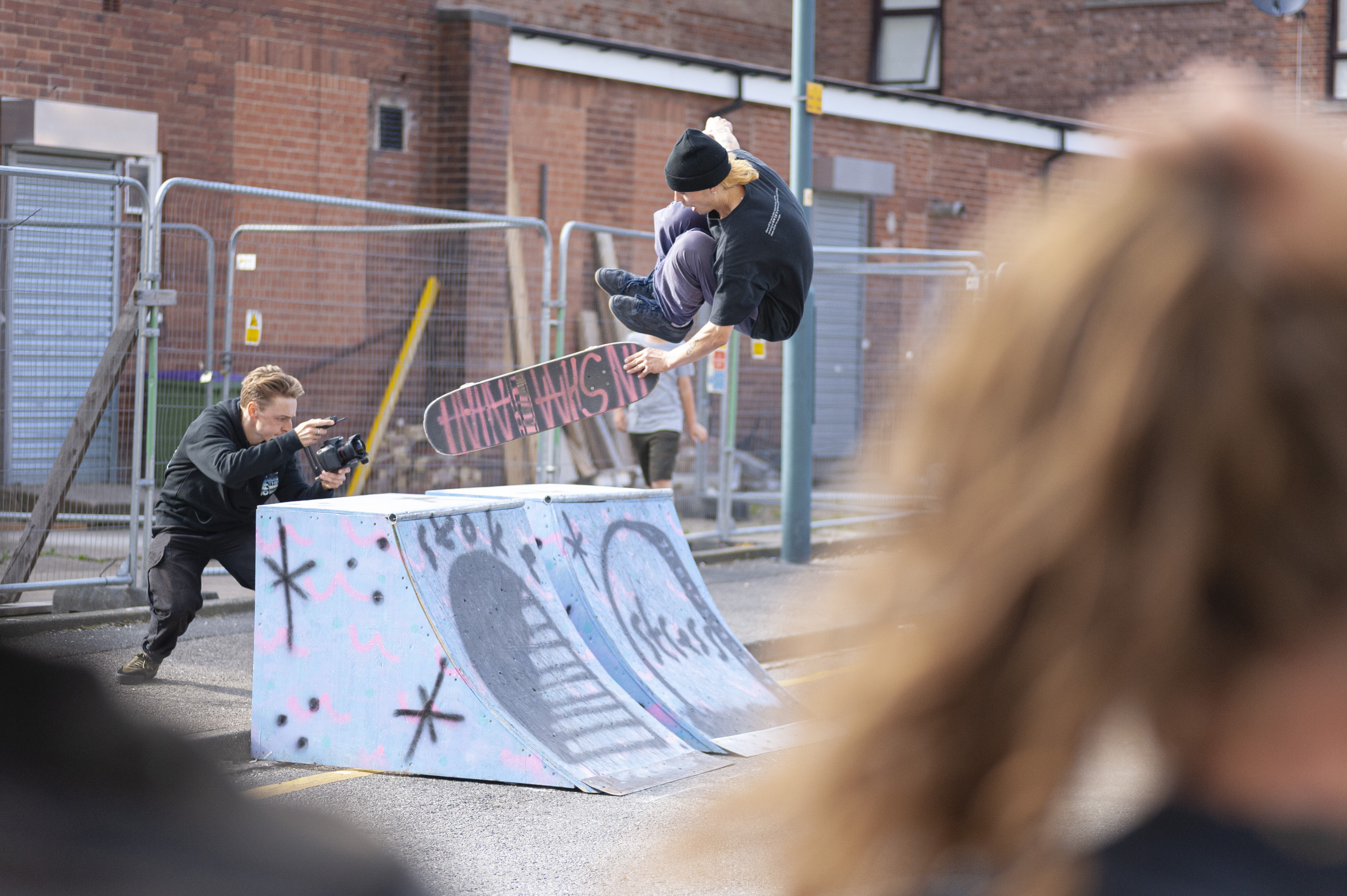 Filmed and Edited by: Ben Powell

The first in the auteurs series by Slam City Skates featuring an interview with videographer Mandible Claw aka Colin Read by the one and only Ben Powell. A lovely read!

Welcome Skate Store x RWTB collab'd to put on a DIY jam for this year's Go Skateboarding Day in Leeds. See the article for a photo gallery and video.